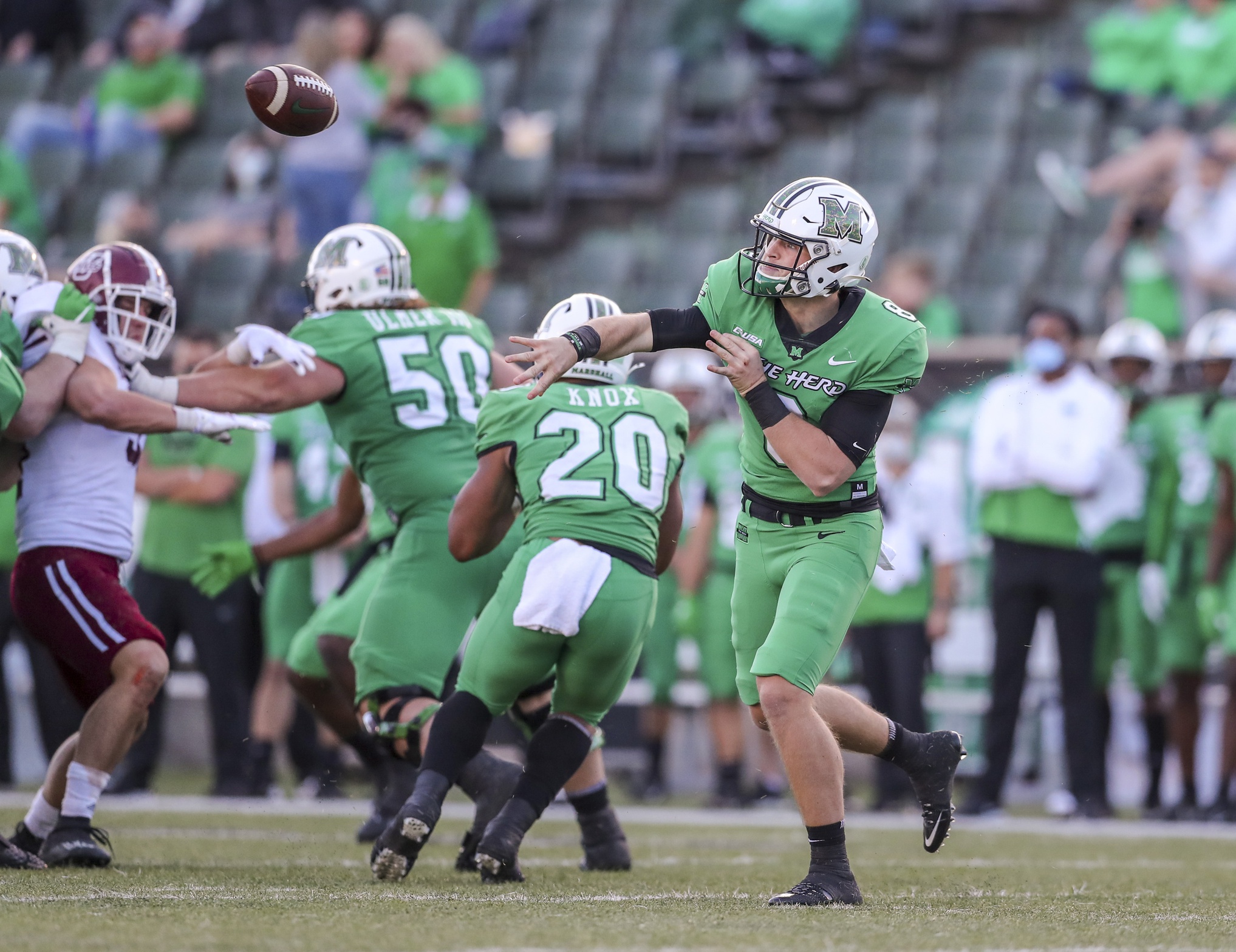 Marshall hopes the start of the 2021 season is much different than the end of the 2020 season when the Thundering Herd opens the season Saturday afternoon at Navy.

The game at Navy-Marine Corps Memorial Stadium in Annapolis, Maryland kicks at 3:30 p.m., and is being televised by CBS Sports Network.

It’s the first matchup between the Herd and Midshipmen and marks the start of Marshall head coach Charles Huff’s tenure.

Huff, a former associate head coach at Alabama, was hired in January to replace 11-year head coach Doc Holliday, whose contract was not renewed after the 2020 campaign.

That 2020 season ended with a bad taste in the mouths of Thundering Herd fans as Marshall dropped a 17-10 Christmas Day game to Buffalo in the Camellia Bowl, played in Mobile, Alabama.

Marshall ended the season on a three-game losing streak, also dropping games to Rice and UAB, the latter of which came in the Conference USA title game. This came after MU won its first seven games and was ranked as high as No. 15 nationally.

Navy had a rough 2020 season, recording a 3-7 record with five straight losses to end the season.

Ken Niumatalolo is in his 14th season as Navy’s head coach and he has a 101-67 career mark in Annapolis.

Here are some things to look for in Saturday’s game:

Is there much significance in who starts?

Huff says that fans shouldn’t take the names at the start of the depth chart as an indication veterans won’t get playing time or even start.

Other new faces in key spots include Cabell Midland alum and redshirt freshman Logan Osburn at right guard, redshirt junior Kendrick Sartor at right tackle and sophomore Shadeed Ahmed at the ‘Z’ wide receiver. Additionally, there are two players who have arrived via the transfer portal in former Clemson Tiger LeAnthony Williams at cornerback and Shane Simmons, who played previously for Penn State, at defensive end

The offensive styles of Marshall and Navy couldn’t be more of a contrast.

Marshall plans to speed up the pace under redshirt freshman quarterback Grant Wells, using its speedy receivers, a deep backfield and athletic players such as senior tight end Xavier Gaines.

Niumatalolo said this week he was still unsure who would be the starting quarterback on Saturday between Xavier Arline or Tai Lavatai, both sophomores.

“If one guy is starting, I wouldn’t be surprised to see the other guy playing in the game because they’re that close,” Niumatalolo said.

The Marshall defense, guided by coordinator Lance Guidry, will try to send plenty of bodies on blitzes and stunts to confuse the Midshipmen.

Huff and Niumatalolo fear that the jitters of a season opener might lead to mistakes, but the team making the fewest will undoubtedly have the edge.

Huff is hopeful that a fall camp filled with hard workouts, an emphasis on mental discipline and repetitions for everyone on the roster will mean Marshall is ready.

“We are working toward being ready. I told the team on Monday that we are not ready yet, because they still allow us to have four more days of preparation and in order for us to be successful on Saturday, we’re going to have to maximize those four days,” Huff said. Niumatalolo hopes the discipline required of playing for the Naval Academy will help his squad overcome hurdles while understanding that some of his players may be physically overmatched in some matchups.

Former Marshall head coach and Navy Athletic Director Jack Lengyel will be honored at Saturday’s game. He’ll take part in the pregame coin toss. Lengyel led the Marshall program out of the ashes of the 1970 plane crash that killed 75 Marshall football players, coaches, staff members and fans. Lengyel coached the Herd from 1971-1975, then became Navy’s first civilian athletic director, serving from 1988-2001 … Navy is 14-10 all-time against Conference USA teams and its last C-USA opponent was Florida Atlantic, a game won by Navy in 2017 … Huff hopes to have a better opening game than his predecessor, as Marshall was beaten at Ohio State 45-7 in 2010 in Holliday’s first game as head coach.