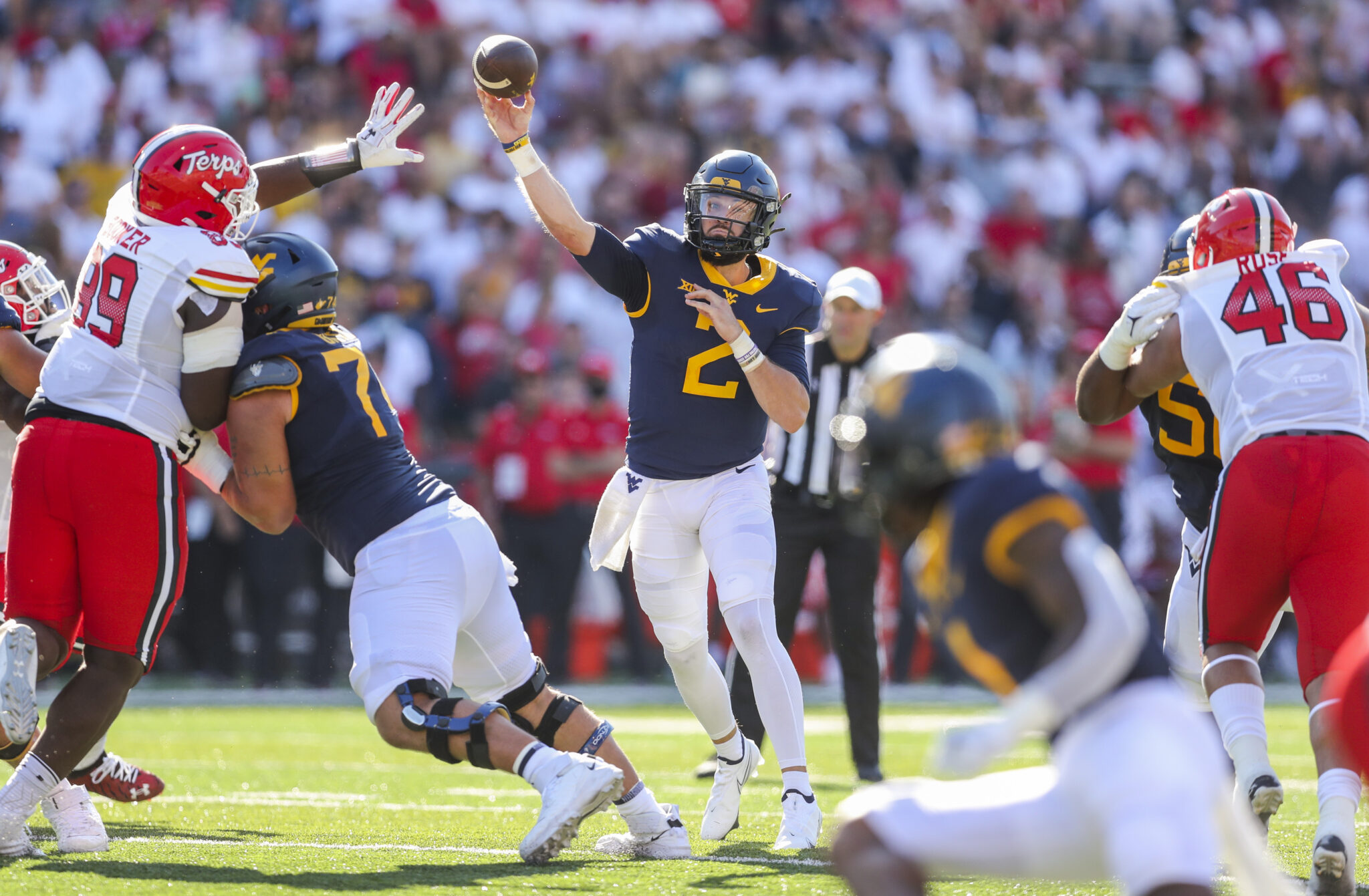 COLLEGE PARK, Md. — As West Virginia coach Neal Brown alluded to in his opening statement in the aftermath of Saturday’s 30-24 loss at Maryland, the numbers weren’t pretty.

The Mountaineers were outgained by 171 yards, including 164-48 on the ground.

West Virginia committed all four of the game’s turnovers and found three different ways to turn it over — twice on Jarret Doege interceptions, once on a Leddie Brown fumble and another on Winston Wright’s muffed punt.

Maryland quarterback Taulia Tagovailoa became the first signal caller to pass for 300 yards against the Mountaineers since Texas Tech’s Jett Duffey in 2019. Tagovailoa completed 26-of-36 passes for 332 yards and three touchdowns.

Still, with so much working against West Virginia, which remains without a road win since Brown’s first season in 2019, the Mountaineers held a 21-20 fourth-quarter lead and had a chance to win until Tagovailoa ran for a first down on third-and-3 on the game’s final series.

Turnovers played a pivotal role in the loss. So, too, did the ineptitude of West Virginia’s offense in the third quarter.

“The part of the game that’s fair to question is right there in that third quarter where we had field position and just weren’t able to capitalize,” Neal Brown said. “We tried to throw some shot plays, gave up pressure and got into some bad down and distances.”

The Mountaineers entered halftime with the same one-point lead they took into the fourth quarter. Over 10 offensive snaps in the third quarter, Maryland totaled 26 yards and did not record a first down.

The Terrapins punted on all three of their third-quarter series, yet WVU never capitalized.

Instead, the Mountaineers gained a paltry 61 yards on 20 offensive snaps in the period, punting three times and turning it over on Brown’s fumble when he was stopped for no gain on third-and-1 from the Terrapins’ 34.

Neal Brown said the Mountaineers would have gone for it on fourth down and taken their chances again that Leddie Brown could move the chains, but that opportunity never came about.

Instead, the Terrapins drove 58 yards into the red zone on their ensuing possession and settled for Joseph Petrino’s 22-yard field goal that put them on top for good.

WVU would go on to be outscored 7-3 over the remainder of the fourth, but it was the third quarter that proved especially costly.

After the Mountaineers allowed 17 first-quarter points, the defense put West Virginia in position to seize control of the contest, particularly over the first 15 minutes after halftime.

“[The offense] helped us out when we were down in the first quarter, then we had to do our part in the third quarter,” WVU linebacker Josh Chandler-Semedo said. “But things just didn’t go our way this evening.”

The Mountaineers got into Maryland territory on three of four possessions in the third quarter and were 2 yards shy of reaching midfield on the other series.

The first second-half series stalled after Doege was sacked on third-and-10 from the Terrapins’ 41. WVU’s second series ended after a strange play call — one that saw Brown stopped for a loss of 4 yards on third-and-8 from the UM 42.

An intentional grounding penalty, combined with an incompletion on third-and-5, brought an end to the third possession of the second half. Brown coughed it up on the fourth.

“We had field position in the third quarter and for whatever reason, we didn’t do much with it,” Neal Brown said.

It was another poor performance from an offense that’s sputtered too often in Brown’s tenure. Dating back to last season, Saturday marked the fifth straight contest that West Virginia failed to score more than 24 points. It was also the 15th time that’s occurred in Brown’s 23 games as head coach.

In today’s era of college football, that simply doesn’t cut it.

West Virginia coaches and players raved about the offseason improvement of Doege, but it wasn’t on display against the Terrapins.

Though Brown has noted since the start of preseason camp that his team still lacks depth on the offensive line, the Mountaineers expected to be better up front. Doege was sacked three times, under pressure somewhat consistently and Leddie Brown averaged a modest 4.3 yards per carry on 17 attempts. This against a Terrapins’ defense that ranked 115th of 127 FBS teams last season by surrendering 230 rushing yards on average.

West Virginia welcomes Long Island of the FCS for its home opener Saturday. The Mountaineers shouldn’t have much trouble rectifying their offensive issues against the Sharks, who have only played at the FBS level since 2019.

But Virginia Tech awaits in Week 3, and the Hokies figure to pose a difficult challenge after knocking off No. 10 North Carolina 17-10 on Friday. Then comes a game at Big 12 Conference favorite Oklahoma.

Things aren’t getting any easier for the Mountaineers.

“I know our fanbase is going to be disappointed and I get that, and that’s fair,” Neal Brown said. “We’d like to play better and cleaner. It’s fair for them to be upset and fair for the criticism. But as a football team, we have to continue to get better. We have to regroup.”