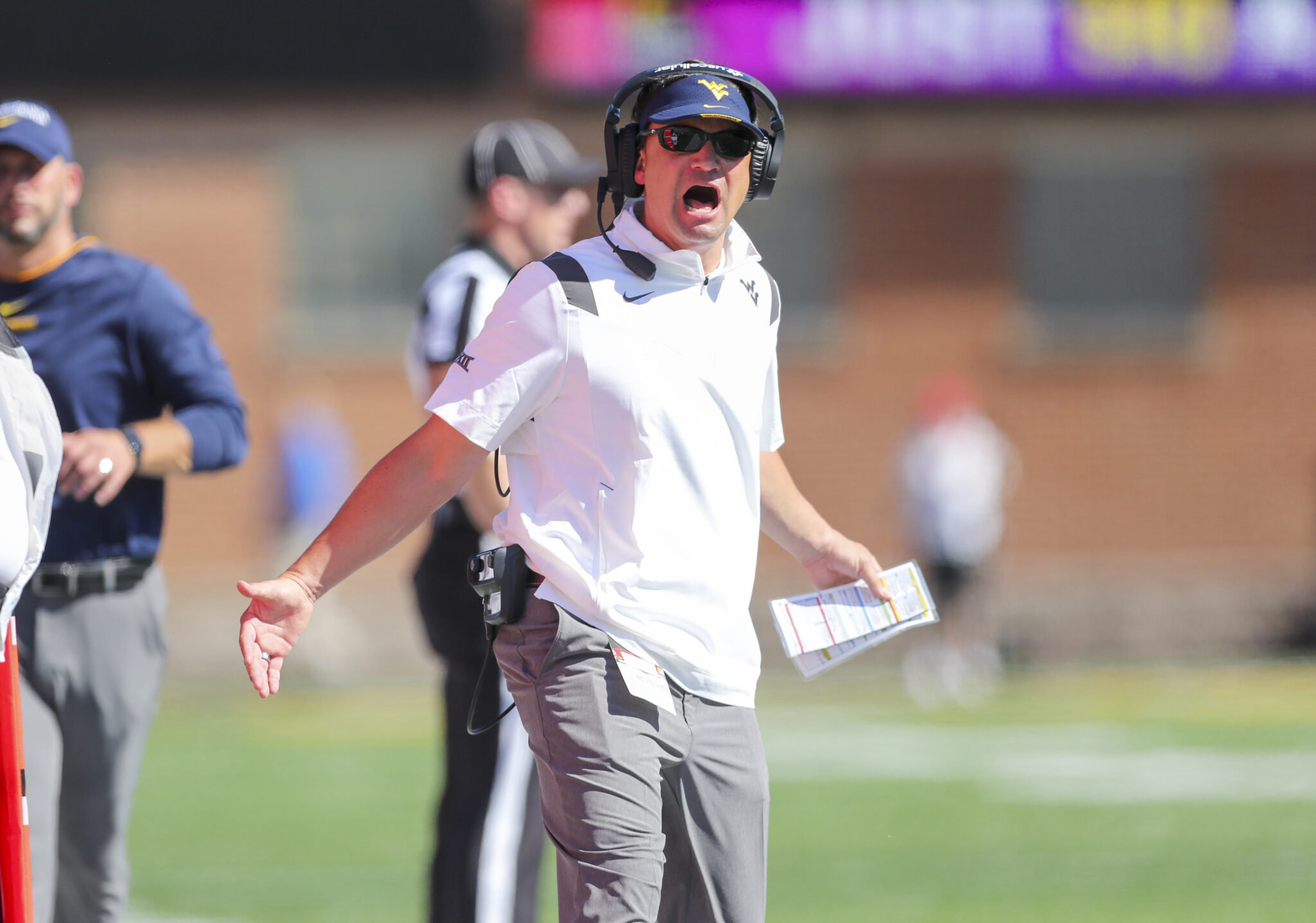 “‘You must never confuse faith that you will prevail in the end, which you can never afford to lose, with a discipline to confront the most brutal facts of your current reality,’” Brown said.

The third-year West Virginia coach reinforced faith in his team prevailing and his ability to build a program that’s going to “have a great infrastructure and be set up to win long term.”

Yet what about the present, where the Mountaineers face an early-season uphill climb as they seek their first win in Saturday’s home opener against Football Championship Subdivision member Long Island?

A matchup with Virginia Tech follows, before a trip to Big 12 Conference favorite Oklahoma and the first league game in Morgantown against Texas Tech, a team Brown has yet to defeat in two tries in his WVU tenure.

Save for a single-game program mark of 217 kickoff return yards from Winston Wright Jr., Leddie Brown’s three touchdowns, WVU’s receivers winning their fair share of 1-on-1 battles and the play of the defense in the third quarter, the head coach didn’t like much else of what he saw at Maryland.

“Even the fact that we didn’t play very well, if we don’t turn the football over, we win,” Brown said. “That is most important. We have to play more physical within our offensive line. We have to be more fundamentally sound at the quarterback position.

“Defensively, we talk about 1/11th here a lot. That’s kind of our mantra. What that means is do your job. We did not play good team defense on Saturday at all. It didn’t necessarily come from a bad place — they’re trying to make a play. But football is the greatest team game and defensively, all the pieces work together.”

Brown wants his team to focus on self-improvement leading up to the home opener rather than what challenges Long Island could present. The Sharks, who began the transition from Division II to FCS in 2019, lost their season opener last Thursday at Florida International, 48-10.

While he was quick to credit Maryland for its performance in the aftermath of Saturday’s setback and again Tuesday, Brown believes West Virginia needs to play more fundamentally sound across the board to put a cleaner brand of football on display.

“We’re going to play a lot of these games that can go either way and that’s where we’re at right now with the schedule we play,” Brown said. “Our margin for error is really small. We can’t do things that hurt ourselves, which is the most infuriating thing about that game. It’s not that we lost. It’s how come we lost — turnovers, missed communication and things like that.”

Brown is hopeful Mathis will play in this weekend’s home opener, while it sounds likely O’Laughlin will miss at least one more game.

“Mathis, I’m hopeful for him,” Brown said. “He had a little bit of a setback last week. I thought we had a chance to get him for Saturday. Mike, I knew was going to be a longshot. But if I told everybody that, it would’ve effected how they planned, because they’d have known we had to play a lot of ’10’ personnel, which we did. Mike is probably still doubtful. He hasn’t practiced a single time in fall camp yet.”

MORE SUCCESS TO COME ON KICKOFF RETURNS?: Wright’s 98-yard kickoff return against the Terrapins was the longest non-scoring kickoff return in WVU history.

The speedy wide receiver also had a 48-yard kickoff return in the second half as he became the first Mountaineer to surpass 200 yards on kickoff returns in a game.

“We blocked kickoff returns last year really well,” Brown said. “He didn’t return them as well. The thing I was excited about was he never stopped his feet, he was decisive in his decisions and he hit them with speed. He’ll continue to do that and I think that’s going to be a real weapon for us moving forward.”

Sports
Strong second half lifts Moorefield to 25-24 win over East Hardy
The Yellow Jackets have won six consecutive games.
By Joe Brocato
Sports
Eakle has East Fairmont on the rise in third season leading the Bees
The Bees are seeking their fourth playoff appearance in 101 years.
By Joe Brocato
Sports
Marshall at North Texas: What to watch for
The Thundering Herd take on the Mean Green in a nationally televised Conference USA matchup.
By MetroNews
Sports
Sean McNeil ready to showcase expanded game in guard-heavy lineup
McNeil elected to return for his senior season after entering the NBA Draft process in the spring.
By Joe Brocato
View AllHoppy's Commentary