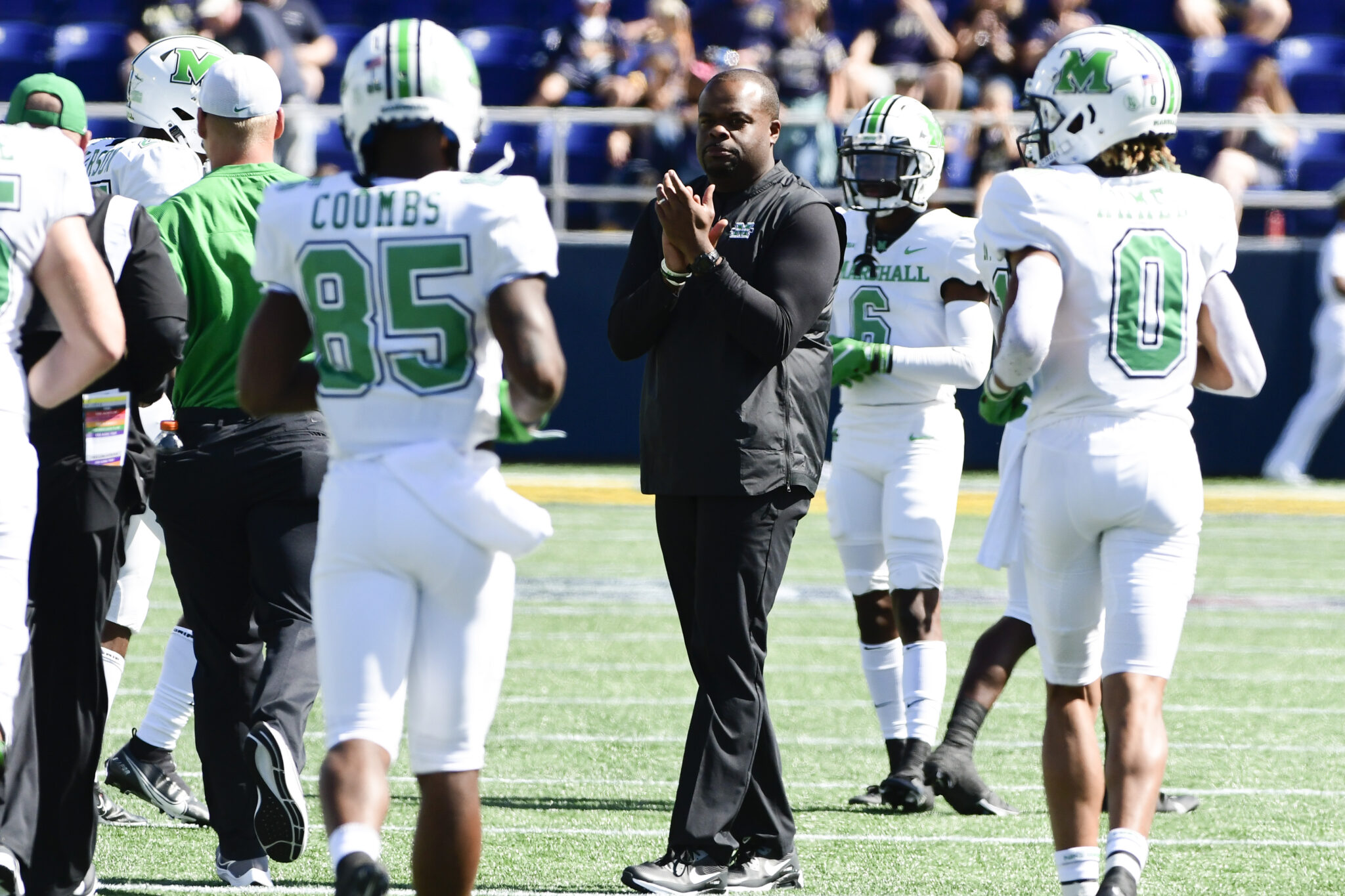 HUNTINGTON, W.Va. — The first reviews on the Charles Huff era of Marshall football are positive.

The Thundering Herd hopes to keep the good vibes going this weekend when it welcomes North Carolina Central for the home opener at Joan C. Edwards Stadium. The game kicks off at 6:30 p.m. and will be shown on ESPN+.

Marshall picked up a dominating 49-7 win at Navy last week in the season opener, while NC Central was off last week after opening the season with a 23-14 victory over Alcorn State in the MEAC/SWAC Challenge in Atlanta on August 28.

The Thundering Herd cruised throughout the opener, scoring on its opening series on the way to 21-0 halftime lead thanks to three Rasheen Ali rushing touchdowns. The lead ballooned to 28-0 in the 3rd quarter on a 9-yard Sheldon Evans touchdown run, before Navy picked up its lone score of the day.

“Things didn’t go perfect in the game from a coaching perspective and there a lot of things we’ve got to get cleaned up, but I think it was a really good start.”

Huff is knowledgeable about the MEAC, having played his college football in that same league at Hampton University.

“When you watch them on film, I won’t say they’re scary, but it’s concerning they have good size,” Huff said. “I think we’re going to be even size-wise in this game on both sides of the ball.

Huff is still smiling over the performance of the Herd’s defense against Navy, as Marshall substituted its base defense to combat the Midshipman’s triple-option attack.

One of the stars of that defensive effort was linebacker Eli Neal, who was named Conference USA’s Defensive Player of the Week after finishing with 11 tackles and three sacks.

“The one thing I saw moving forward closer to the Navy game was his preparation,” Huff said. “His preparation from film-watching, his preparation from the way he practiced, the consistency in his practice, the leadership that he had in demanding that everybody around him practice with the same kind of intensity and focus. Saturday was just a byproduct of the work he put in. You guys had the chance to see that.”

This Saturday’s game is the first meeting between the Herd and Eagles, who are led by head coach Trei Oliver.

Oliver’s first season guiding NC Central was 2019, when the Eagles finished 4-8. They did not play the 2020 season as a result of the pandemic.

Former Bluefield High star running back Latrell “Mookie” Collier is a tailback on North Carolina Central. Collier, the 2017 MetroNews Football Player of the Year and Kennedy Award winner, began his college football career as a walk-on at Marshall. Collier scored five touchdowns for NCCU in 2019 … Marshall had only one blocked kick in the 2020 season, but that number has already been doubled after one game in 2021. TJ Johnson blocked a Bijan Nichols field goal attempt in the first quarter and Naquan Renalds blocked a Duke Pa’ane punt attempt in the second quarter at Navy.