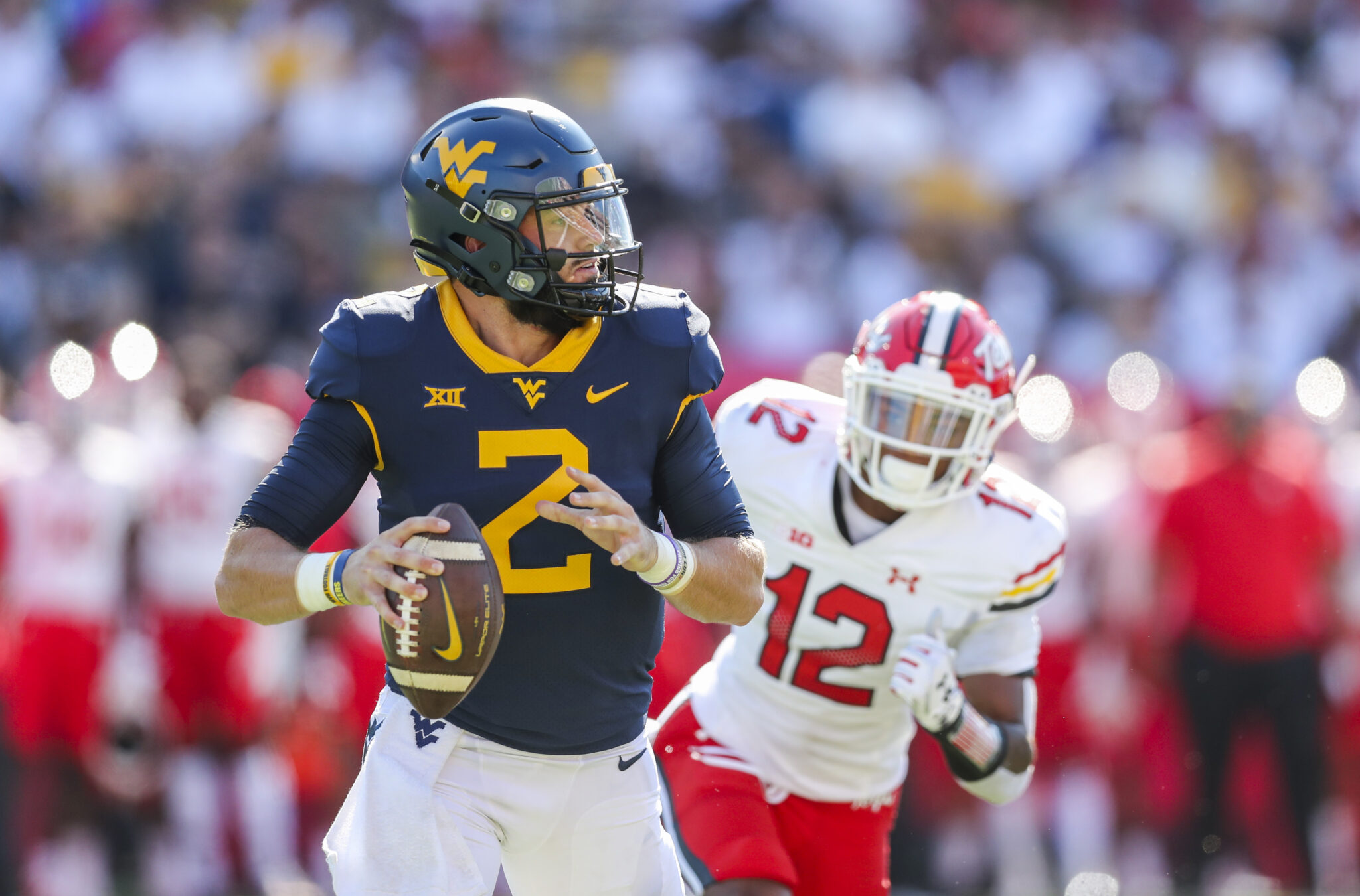 West Virginia quarterback Jarret Doege (2) drops back for a pass and is chased by Maryland defensive back Tarheeb Still (12) during the first quarter at Capital One Field at Maryland Stadium. Mandatory Credit: Ben Queen-USA TODAY Sports

MORGANTOWN, W.Va. — There may be no bigger goal of West Virginia’s in Saturday’s 5 p.m. home opener against Long Island than to get its offense untracked after last week’s second-half struggles at Maryland.

If nothing else, going against a program that began its transition from Division II to the Football Championship Subdivision in 2019 should allow the Mountaineers to feel good about themselves ahead of a Week 3 matchup with Virginia Tech.

However, much of that will come down to the play of redshirt senior quarterback Jarret Doege.

“There’s growth, but it’s a high tension position,” WVU offensive coordinator Gerad Parker said. “Every decision he makes is very difficult and affects us on each and every play and he knows that. That’s the beauty of playing that position.”

After scoring 21 of 24 points in the first 19 minutes against the Terrapins, West Virginia went on to commit four turnovers, including three offensively. Doege was intercepted twice — first by Nick Cross on the first play of a series, and by Jakorian Bennett in the red zone with the Mountaineers trailing 23-21.

Bennett’s pick came at a far more critical juncture in the game, but the miscue to Cross drew the ire of West Virginia head coach Neal Brown.

“We got the fourth down stop and a huge momentum deal and on his first interception, we ran kind of a four vertical with the under,” Brown said. “If he just moves up and throws the under, it’s probably second-and-4 and we play the next play. We got a little pressure from the outside and rather than just moving up, he got flushed. We have to do a better job of moving up. Some of that is we have to firm up the pocket, and some is his instincts have to be better.”

Doege started fast and helped lead the Mountaineers to 21 points and 163 yards on their first four series, but he ended 24-of-40 for 277 yards with one touchdown and the two INTs.

It wasn’t a coincidence that West Virginia’s offense was better in the first two quarters, when tailback Leddie Brown had all but 20 of his 73 rushing yards on 10 carries. Brown was also a much bigger factor in the passing attack early. He caught one pass for a loss of 4 yards in the second half, but finished with four receptions for 47 yards and a 20-yard TD — a play Neal Brown credited Doege for .

“He did some good things,” Brown said. “The first drive, it’s kind of bang bang, he throws a great ball right on the upfield shoulder to Leddie, and Leddie does the rest. On the drive we kicked a field goal on, he’s right on the money. On third downs, he was a lot better. We had 14 end of series situations and the ones we threw it, we were pretty successful. He is better. The thing that he has to get better at is he can’t make the bad plays worse.”

Over 10 games in his first season as West Virginia’s full-time starter in 2020, Doege threw four interceptions.

Brown didn’t place much blame on Doege for Bennett’s interception, although it came with West Virginia in field goal range when three points would’ve meant a fourth-quarter lead.

“The second interception was a fluke play,” Brown said. “I said it after the game and it was even more fluke after watching it on film. Zero blitz, pretty good ball, may have hung it a little bit, but the kid came off and probably shouldn’t have. hH got away with one. But that’s the way the ball bounces sometimes.”

Doege was sacked three times for a loss of 27 yards against the Terrapins, who bothered the veteran signal caller with edge pressure that helped lead to an intentional grounding and several throwaways.

“He has to eliminate the negative plays,” Brown said, “and be able to move up in the pocket.”

Before the season, Doege said the primary focus of his offseason work was developing more mobility and a better pocket presence and becoming more reliable on long throws.

It remains a work in progress, though he did connect with wideouts Sam James and Sean Ryan for gains of 39 and 34 yards, respectively.

Doege is also striving to improve his decision making and take better care of the football, something that rarely plagued him a year ago.

“The number one precursor to winning football games is still turnover margin, no matter how much the game changes,” Parker said. “We didn’t take care of the ball and we lost the turnover margin. On offense, we didn’t do our part in that. So that has to be the first that we fix.”