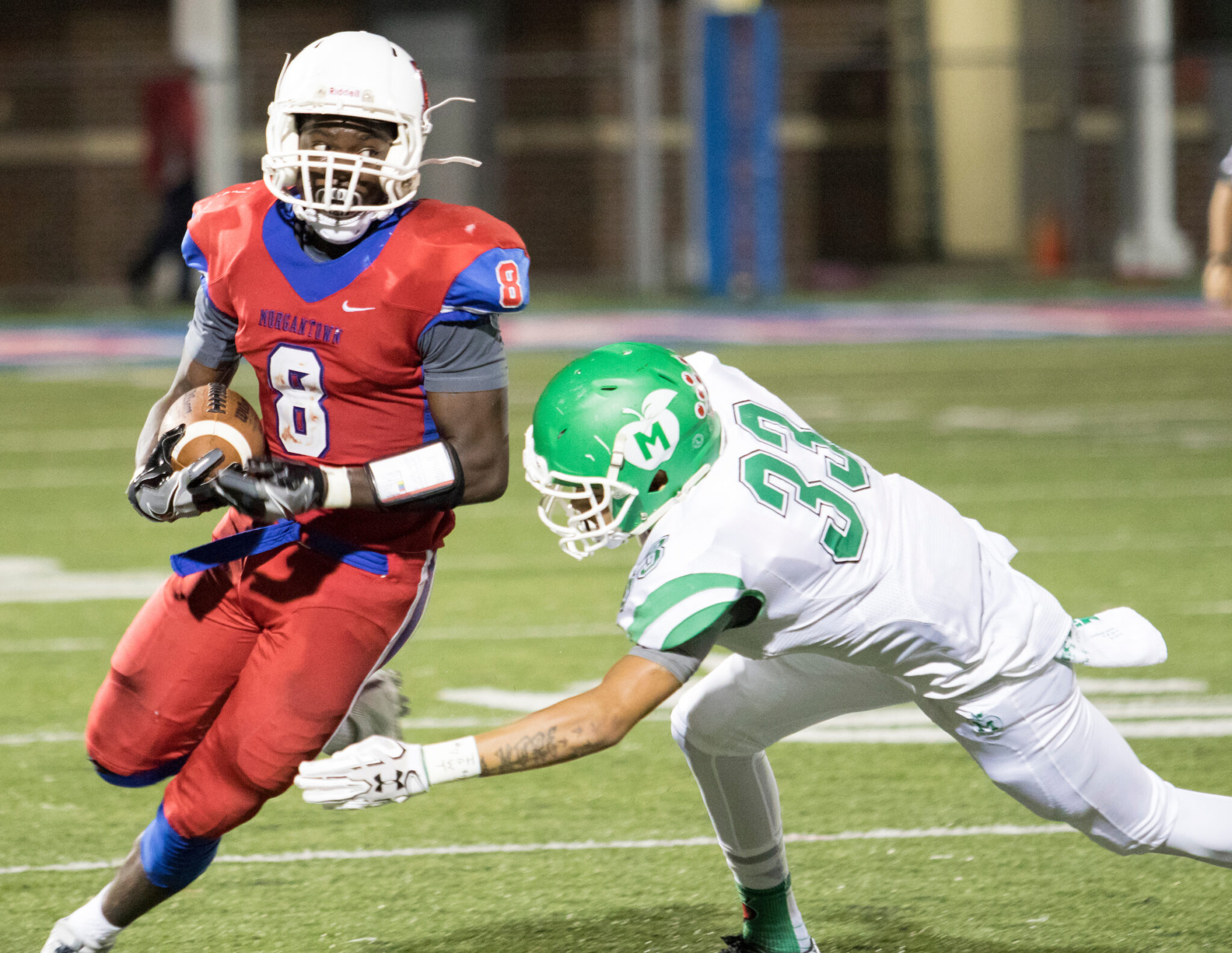 Morgantown H.S. graduate Ben Waibogha is in his second season at LIU.

MORGANTOWN, W.Va. — Nearly five years have passed since Ben Waibogha played a football game in Morgantown. The former Mohigan returns Saturday as a member of the Long Island University Sharks. Waibogha is in his second season at LIU and the move to the New York City metro area has served him well.

“Great coaching staff, great school, great academics and also on top of that, I am twenty minutes away from New York City,” Waibogha said. “It just checked off every single thing on my list. I have loved being here every single day. I love the coaches. I love my teammates. I think it was a really good opportunity and a really good choice I made in my life.”

In his senior season at Morgantown High School in the fall of 2016, Waibogha made 58 tackles, intercepted four passes and scored seven touchdowns. MHS won ten games and advanced to the Class AAA state semifinals.

Waibogha’s college football journey started at Lackwanna College in Pennsylvania. That is the same junior college that produced WVU’s first-round draft pick, Kevin White and New York Jets tight end/fullback Trevon Wesco. As a sophomore at Lackwanna, Waibogha led the team with six interceptions. In his two years there, Waibogha racked up 52 tackles and eight picks.

“Playing at Lackawanna against [future] Division I and even ‘Power 5’ guys really helped develop me as a football player,” Waibogha said. “That transitioned over really well for me at the next level, playing Division I because there wasn’t that huge jump that high schoolers had to make. I kind of had a head start.”

As his second season at Lackawanna was winding down, Waibogha received scholarship offers from FCS programs Morgan State and Robert Morris. He accepted a scholarship offer and enrolled at LIU in the spring of 2020. Waibogha made a significant position change once he arrived at Long Island. He played safety in high school and in junior college but he transitioned into a defensive end. Taking on 300-pound offensive linemen proved to be both a physical and mental challenge.

Interestingly enough, Waibogha’s move to the trenches was one he always wanted to make, even back in his high school days.

“It is actually funny that I got to play this position because I have always actually wanted to play it. I just never got the opportunity to.”

Long Island is in their third season at the FCS level after moving up from Division II in 2019. The Sharks are facing three FBS opponents to open up this season. Last week, Waibogha made three tackles in a game at Florida International.

“The foundation we are building right now is going to be very successful. I feel like this school is going in the right direction with everything they’re doing. I am just glad to be a part of it.”

Waibogha’s Mountaineer memories date all the way back to his pee-wee football days, where some elite WVU players were his role models.

“I was playing for a local pee-wee team, the Evansdale Tigers. At the time, we had players come to our practices. And sometimes we would practice at the WVU indoor facility. We would be around players like Noel Devine. Geno Smith was there, Jock Sanders, players like that were WVU legends. Just being able to be around those types of people when I was in the key development stages, learning the game and being around it, those were things I would never forget.”

Many of Waibogha’s high school teammates will be in the stands Saturday and his current teammates helped with the expected crush for tickets.

“I am going to have over twenty. But a lot of my friends from Morgantown already got their tickets as soon as they saw Long Island on the schedule.

“But also, my teammates just offered all these tickets to me too. So they made my life a lot easier.”

Sports
East Carolina at Marshall: What to watch for
The Thundering Herd look to protect the ball and slow Pirates' quarterback Houston Ahlers in an effort to prolong an unbeaten start to the season.
By MetroNews
Sports
West Virginia visits defending national champion Marshall in Top 10 clash
The Mountaineers are ranked fourth nationally while the Thundering Herd are sixth.
By Joe Brocato
Sports
Kellar & Lopez combine for 3 TDs, Lincoln's defense shines in 21-13 win at Nicholas
The Cougars improved to 3-0 with a quality road victory.
By Joe Brocato
Sports
Wright's prowess on kickoff returns will be put to the test against Hokies
WVU's kickoff return unit has been a super strength early in the season, but Virginia Tech's kickoff coverage has been among college football's best for a long time.
By Greg Carey
View AllHoppy's Commentary