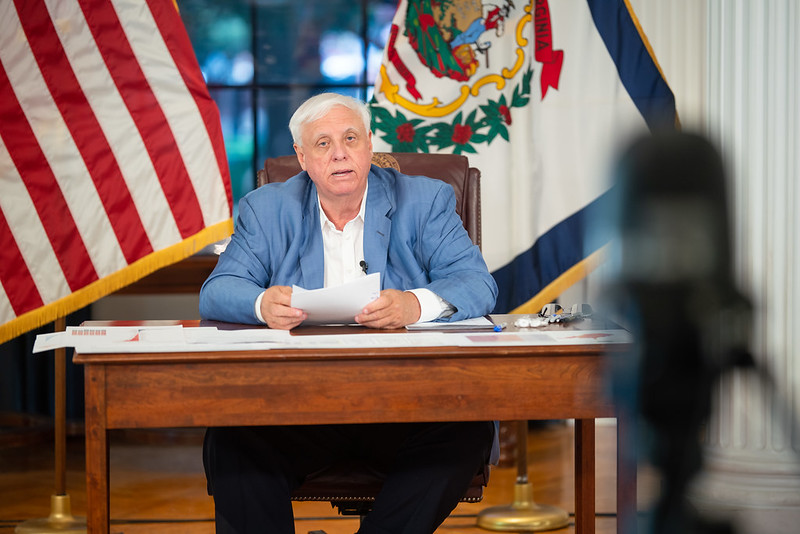 “I don’t think that’s going to go into effect. I hope and pray that it’s not,” Justice said today, characterizing the plans as federal overreach and suggesting the announcement was made to change the national conversation from chaos in Afghanistan.

Aspects affecting business includes a requirement through OSHA to require employers with more than 100 workers to institute either vaccinations or weekly testing. The plan would also require vaccinations for federal workers or for employees of contractors doing business with the federal government.

The plan requires staff at federally-run schools, such as those associated with the Department of Defense, to be vaccinated. And it calls on states to adopt vaccine requirements for all school employees.

Justice, a Republican, has consistently urged West Virginians to get vaccinated.

But the governor, whose family owns a sprawling business organization, said he objects to government telling business what to do.

He leveled that criticism not only at the Biden administration’s plans but also at some Republicans in the state Legislature who favor a proposal that would prevent medical facilities from making their own choice to require vaccinations.

Speaking of the possible state bill placing restrictions on vaccination requirements by businesses, the governor said “I would not support that type of legislation. We’re talking about intervening in businesses’ business. We’re talking about putting a mandate on that a private business couldn’t decide on their own what they wanted to do.

“I always thought true Republicans stood for letting private businesses do what they want to do. It seems like a complete role reversal. It seems like something the Democrats would have come up with years ago.”

Justice said he had participated in a call of the Republican Governors Association this morning and went on an extended discussion of what overarching philosophy is most appropriate to deal with covid-19.

Republican governors across the nation have been critical of Biden’s announcement, with some threatening lawsuits.

West Virginia’s governor said he favors encouraging people to get vaccinated without any caveats.

“We have got to be the biggest cheerleaders of all to get vaccinated,'” Justice said.

He expanded by saying he favors “encouragement of people with no qualifiers that would say something like ‘I believe you should get vaccinated but it’s just your choice’ and they don’t wholeheartedly commit to saying ‘We’ve got to get vaccinated everybody.'”

The most recent statistics show 816 covid patients in the hospital, just two below the all-time pandemic high. Of those, 83.7 percent were unvaccinated patients, state data showed.

There were 252 patients requiring the intensive care unit, now way above the all-time high of 219.

And there were 141 patients needing ventilators, far beyond the single-day high of 104 from last January.

Justice questioned whether West Virginia is anywhere close to peaking from the effects of the highly-contagious delta variant.

“Is the guarantee really and truly that we’re just at the beginning and maybe we won’t peak until Halloween or Thanksgiving?” he asked.

He said West Virginia will be better off if more people choose vaccination.

“The likelihood that things are going to get worse is certainly there if we don’t get vaccinated,” he said.