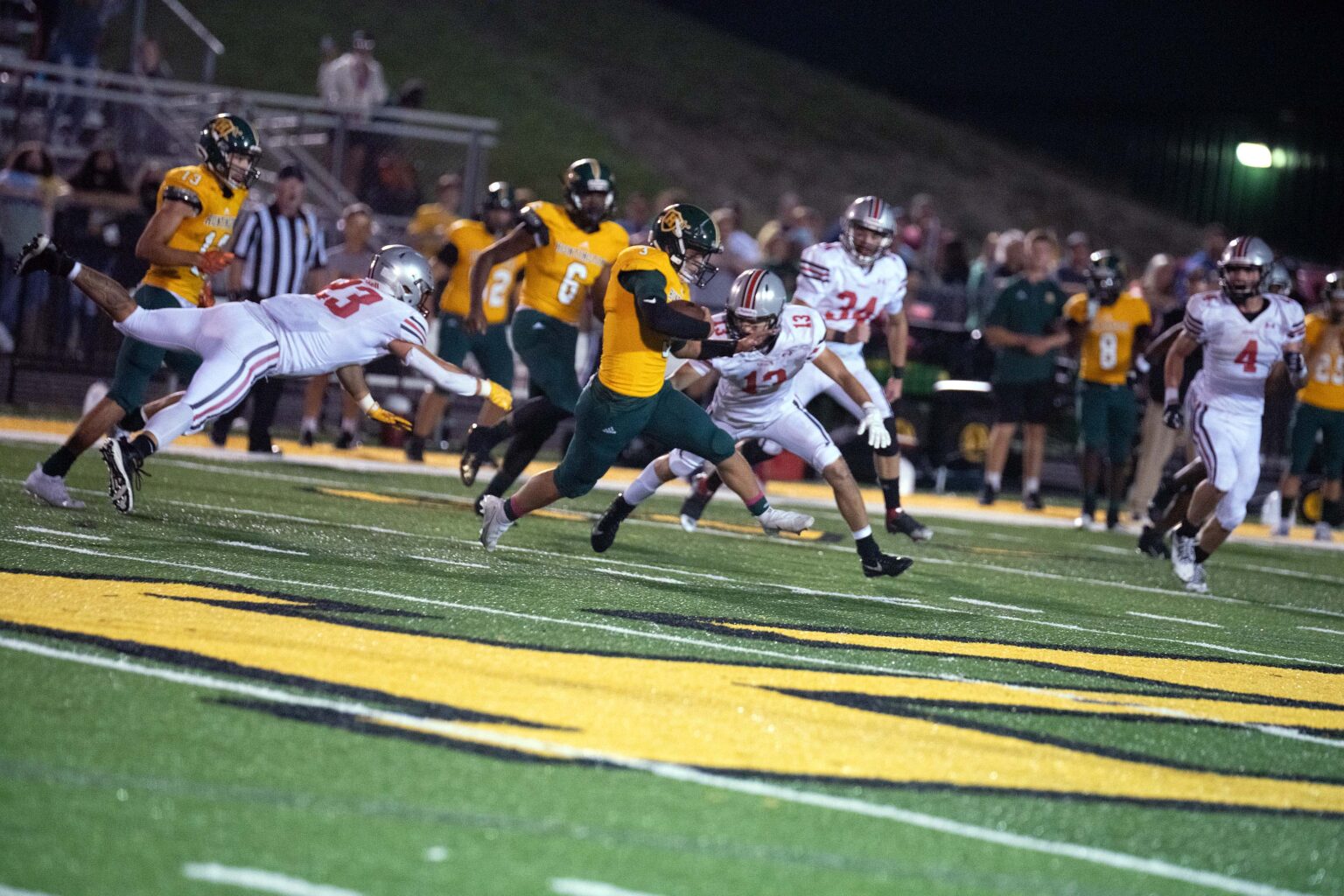 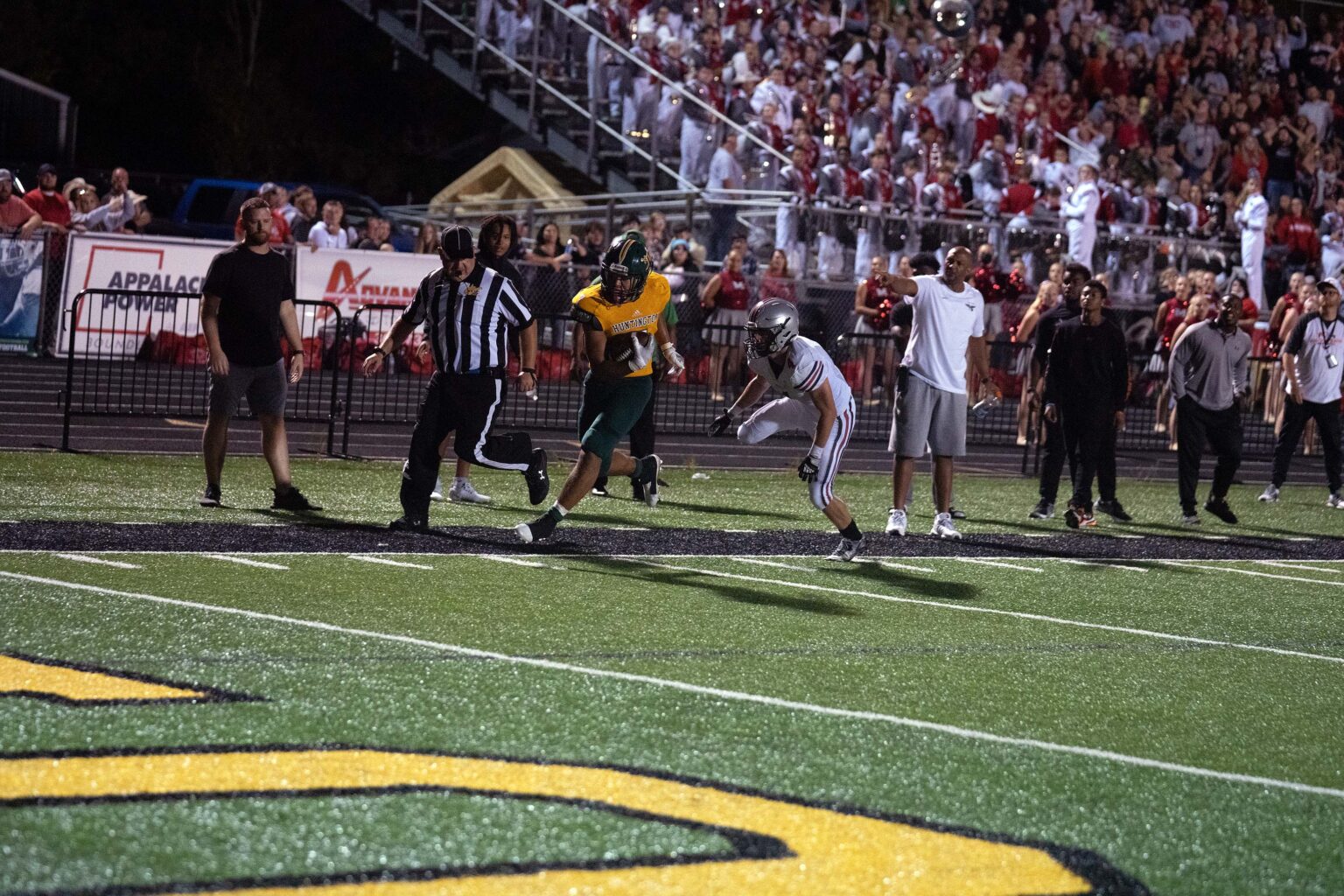 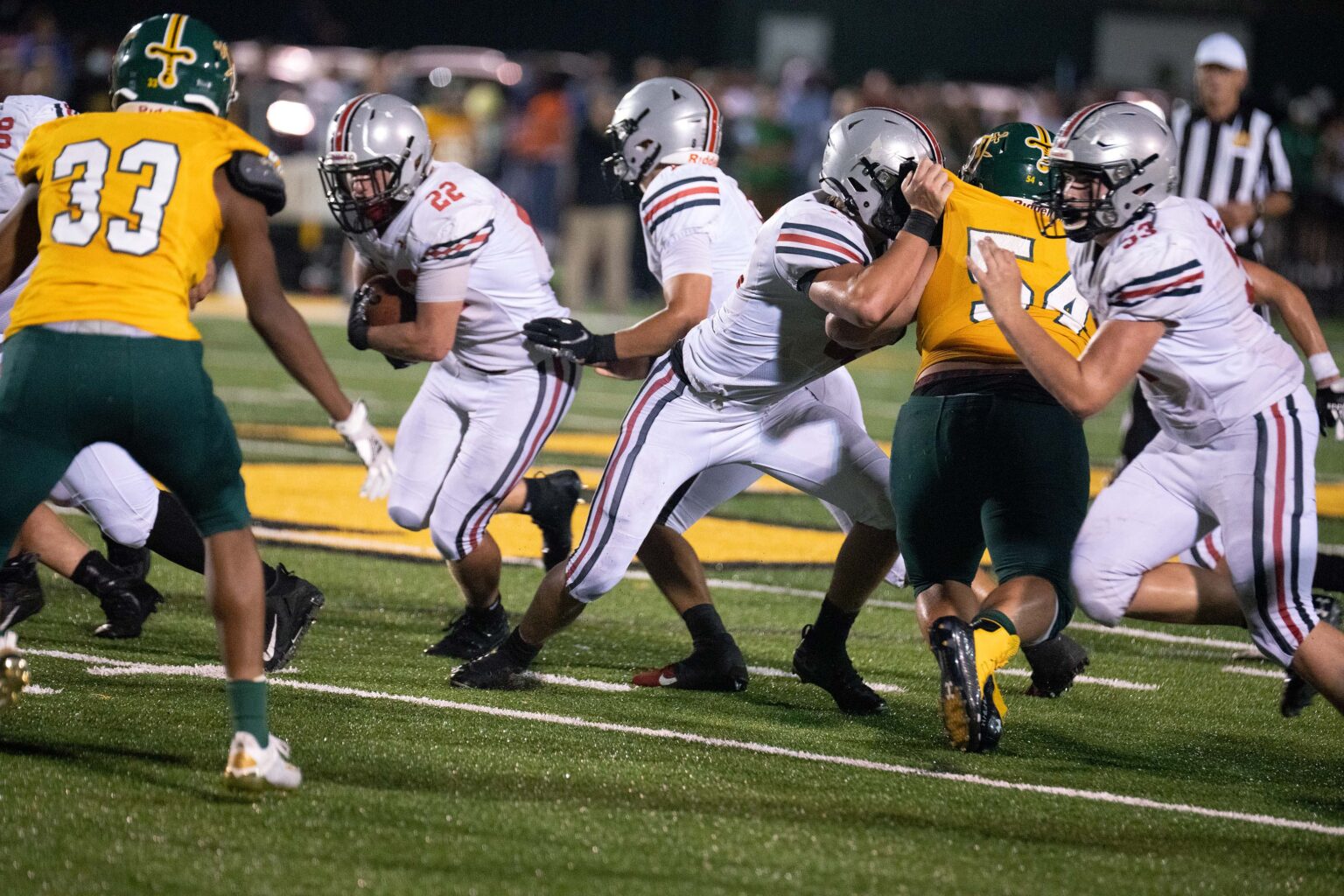 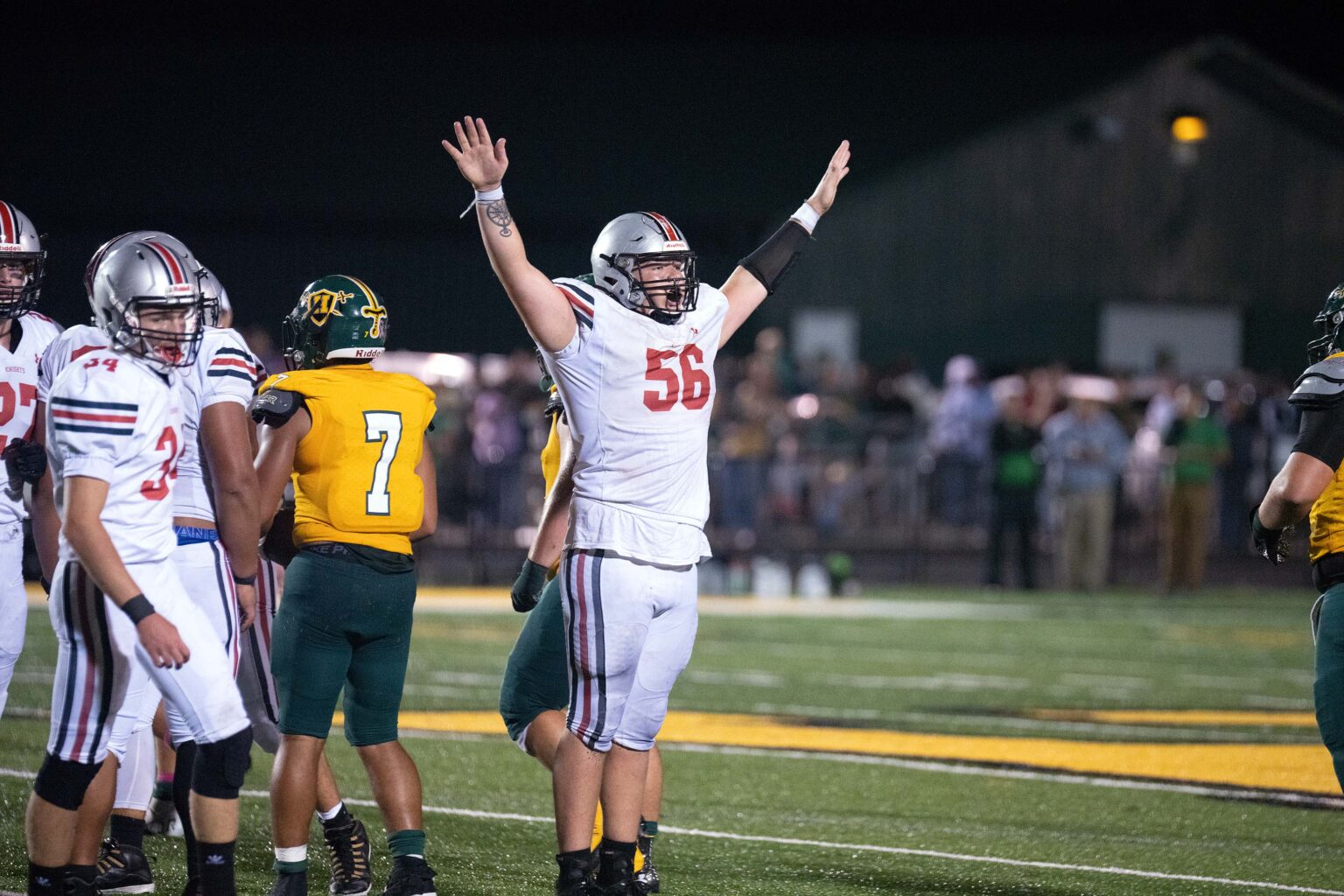 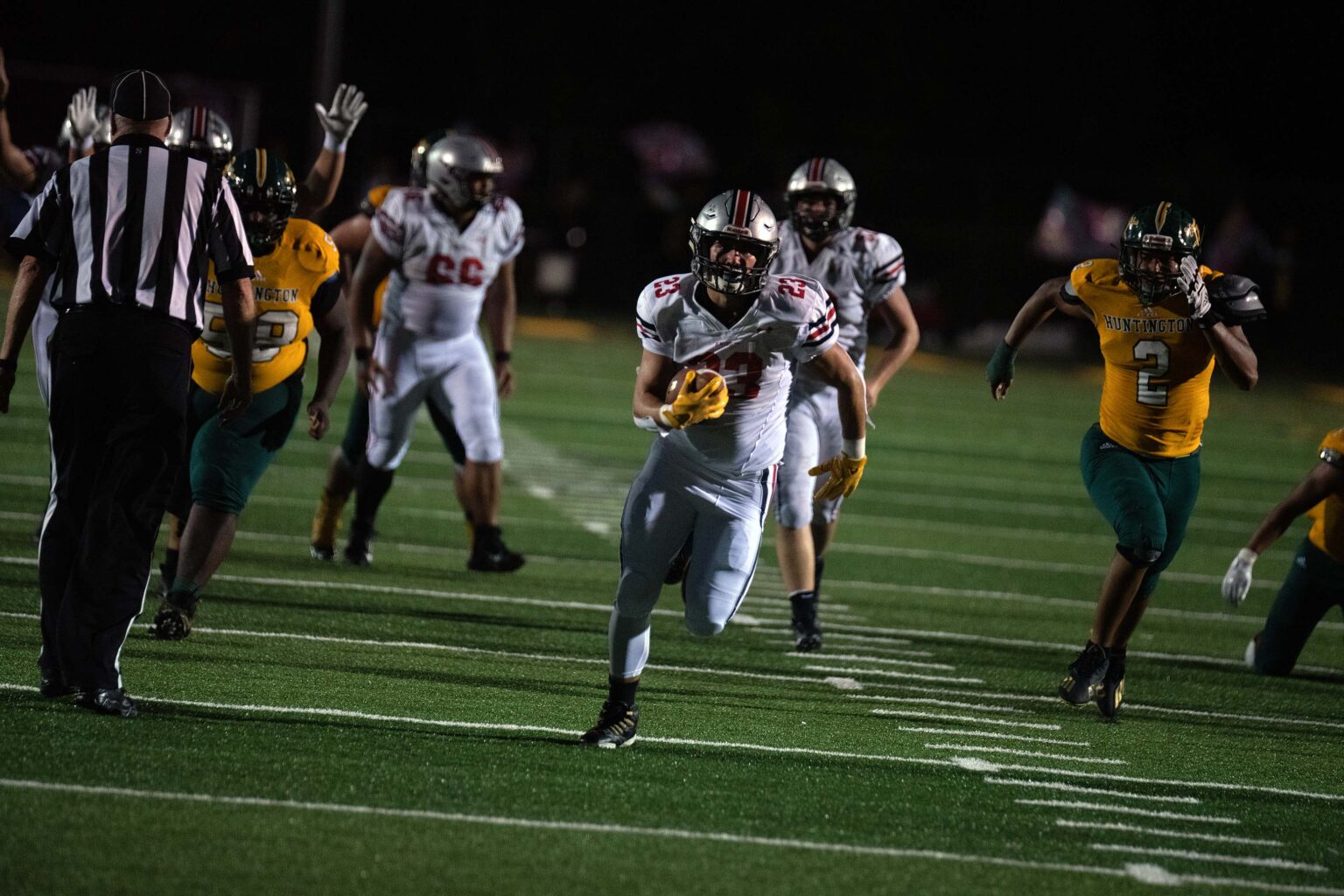 Cabell Midland's Chandler Schmidt runs for one of his two touchdowns. Photo by John Hagley Photography 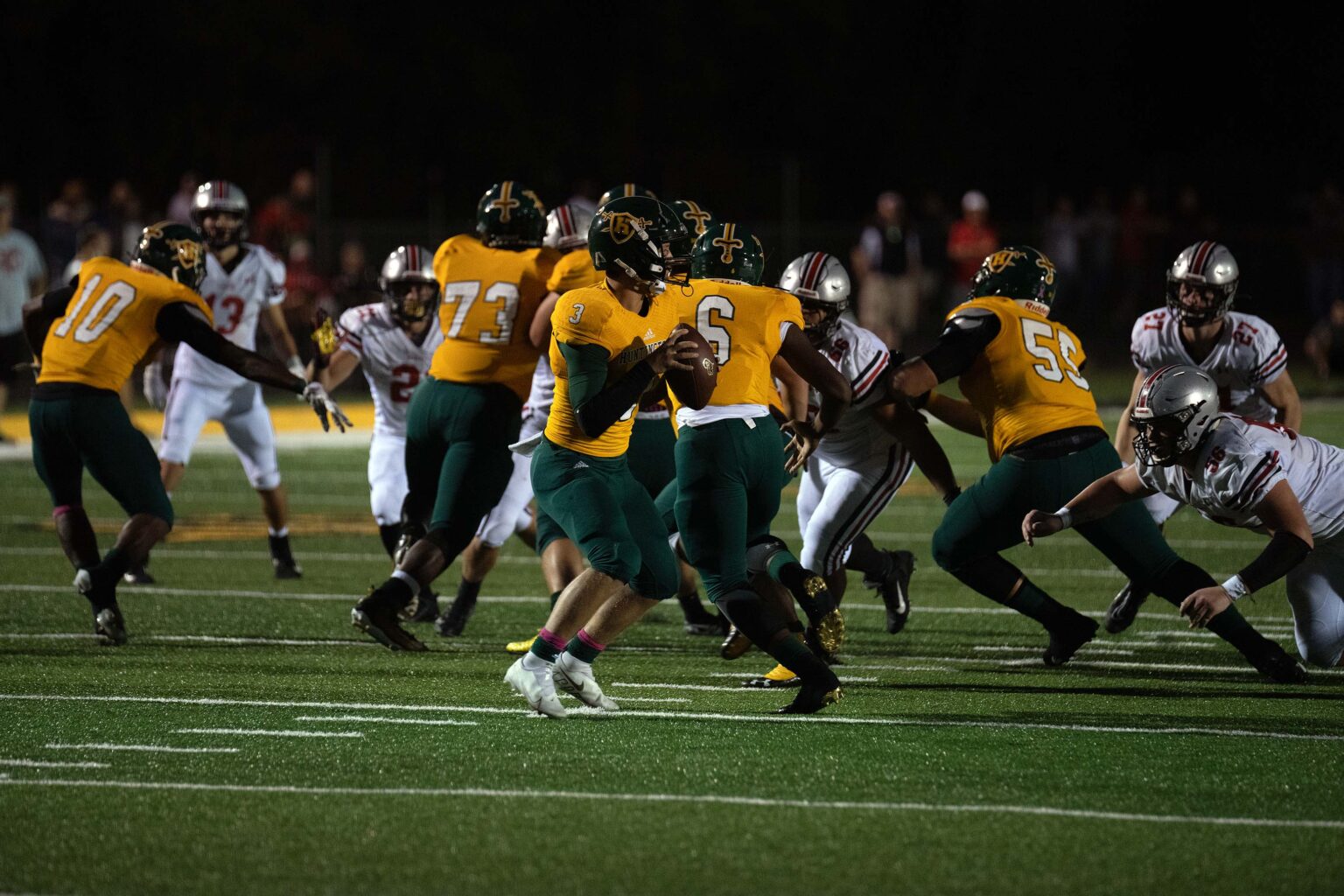 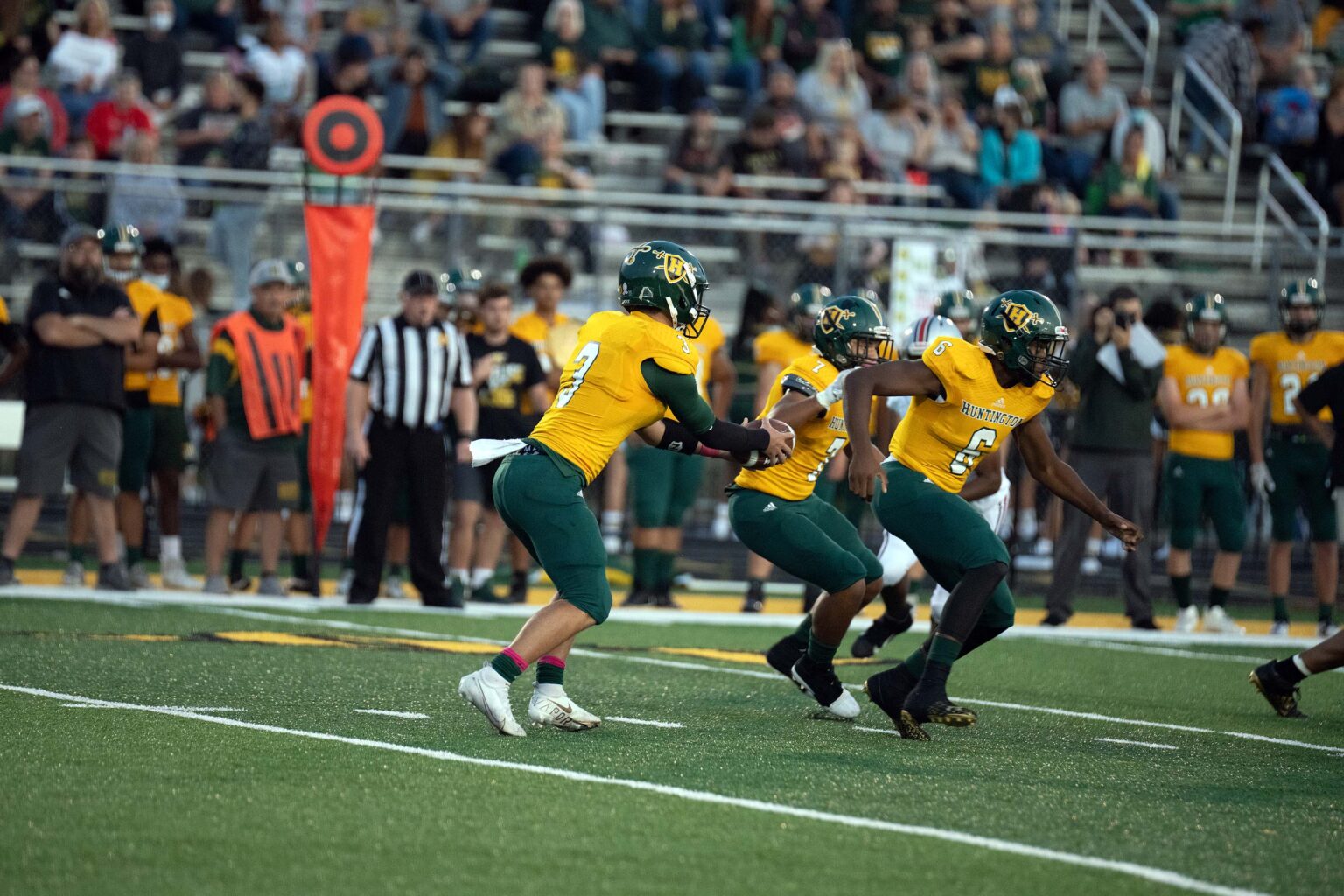 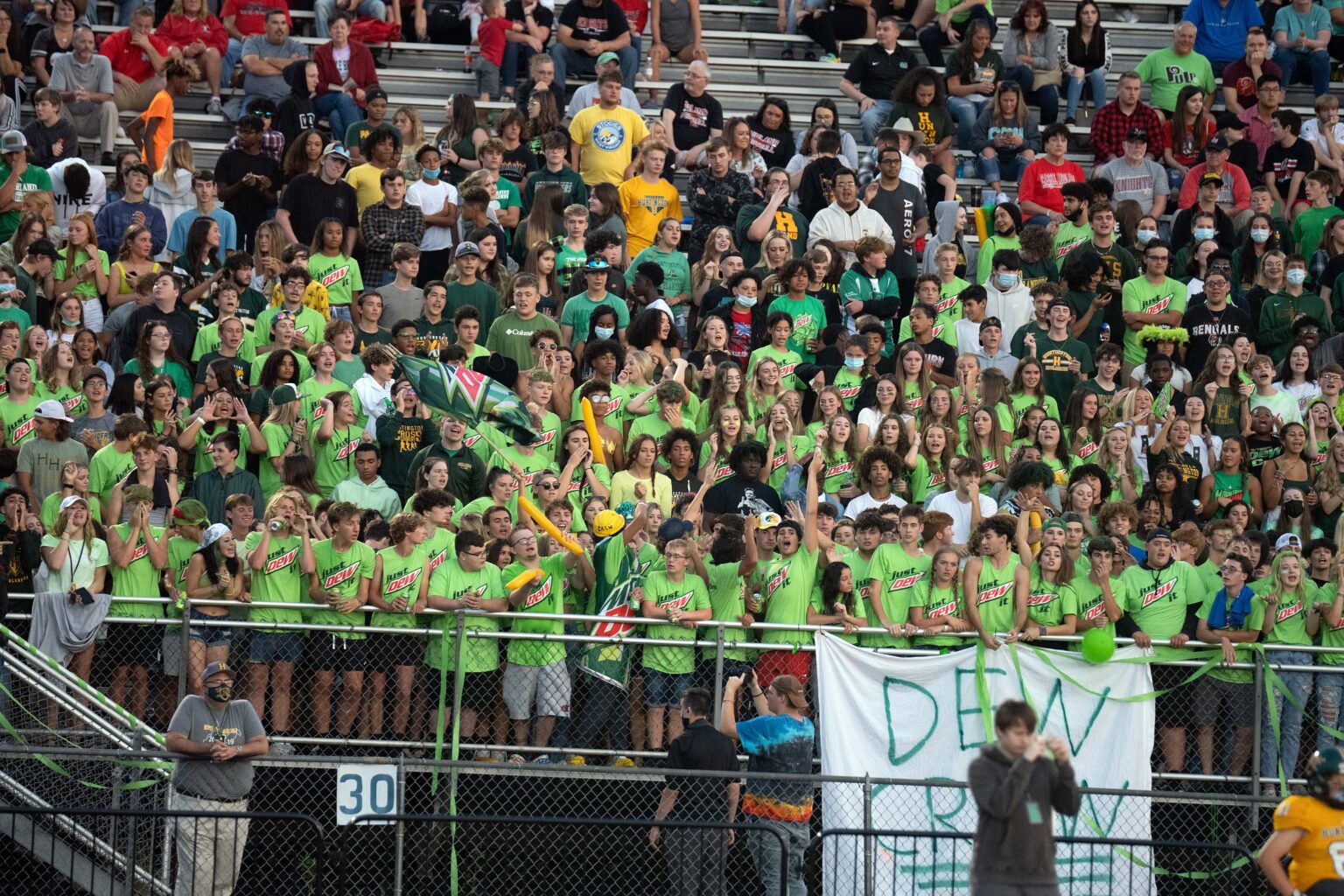 The Huntington student section was filled for the Highlanders' annual rivalry against Cabell Midland. Photo by John Hagley Photography 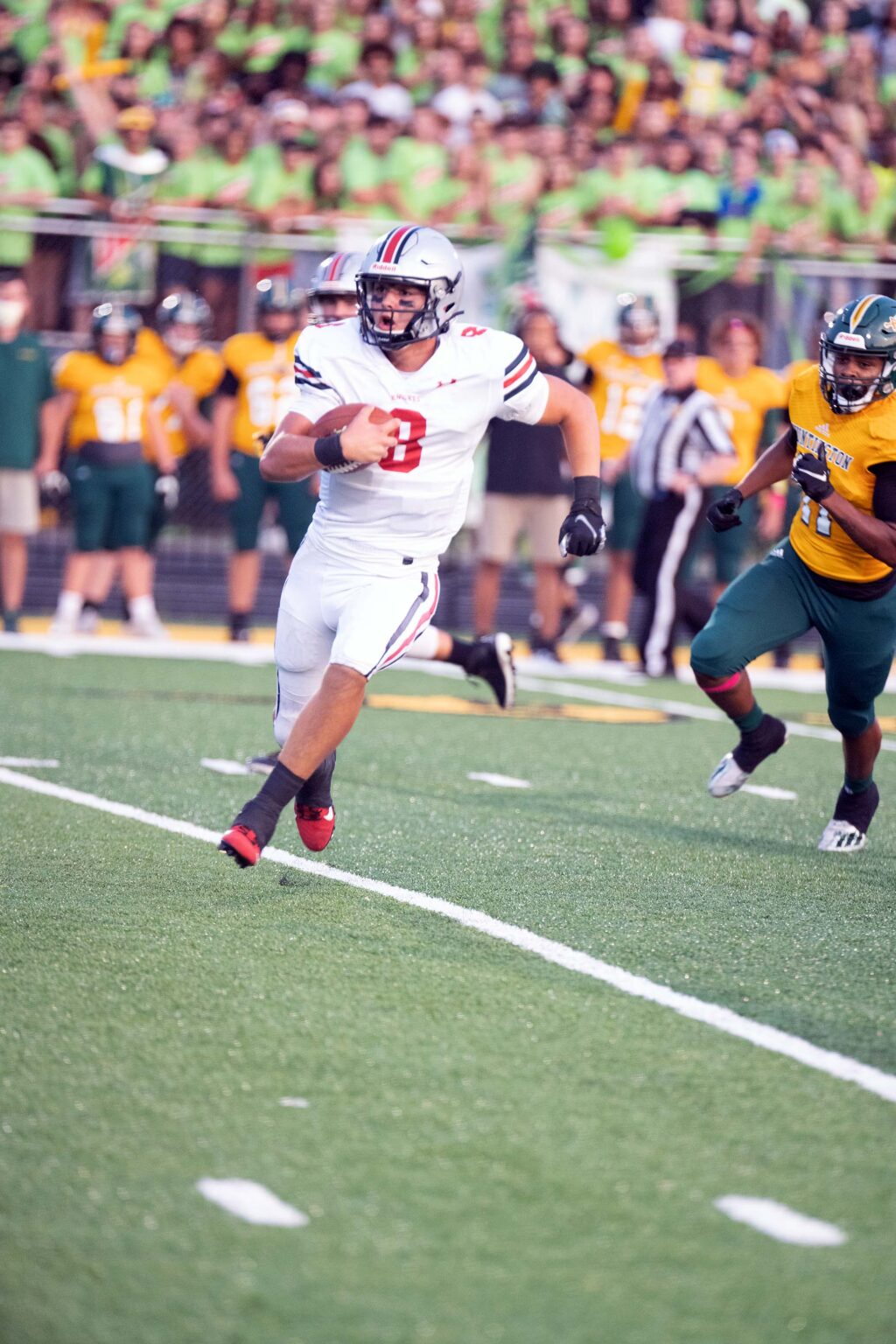 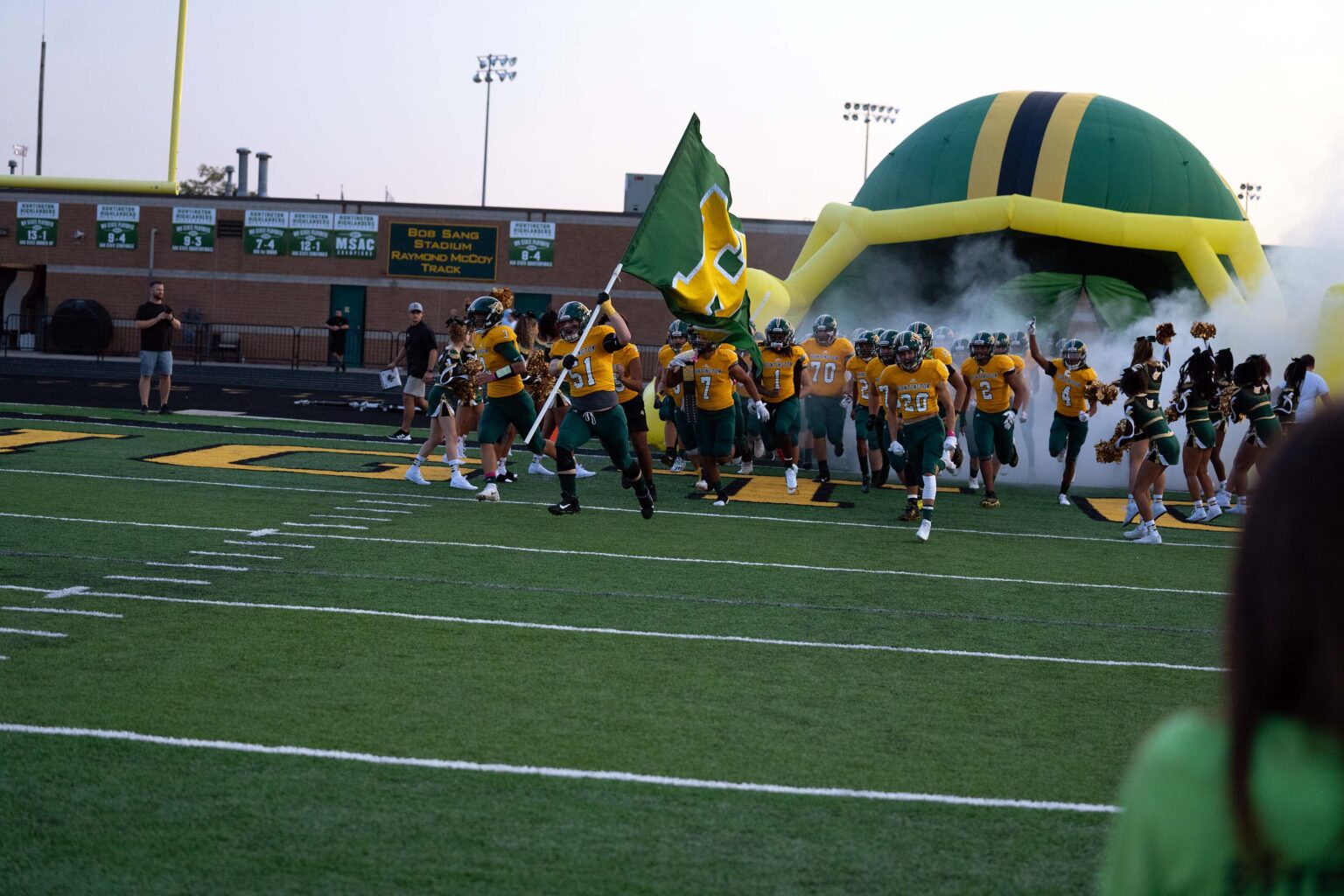 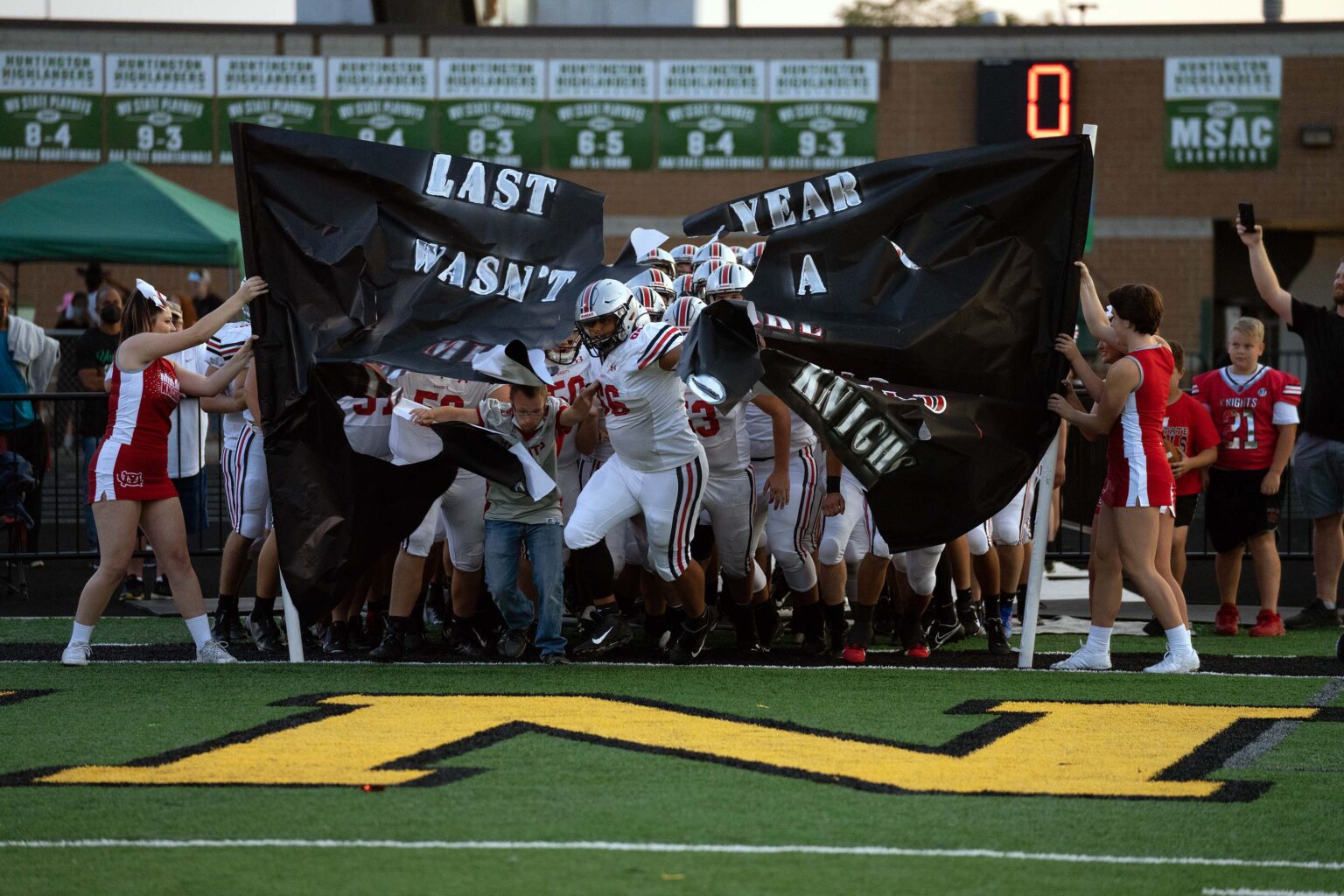 On Friday, “The Battle for the Shield” between the two Cabell County schools certainly lived up to that billing.

Highlanders’ quarterback Gavin Lochow threw a go-ahead 40-yard touchdown pass to Amari Felder with 2:45 remaining, and the Huntington defense made it stand with Noah Waynick’s late interception that helped seal a 21-17 victory over the Knights.

“Hats off to Cabell Midland and hats off to our kids,” Seals said. “We’re back to what we’re accustomed to being after an unorthodox year for us last year. I’m proud of our kids. They showed a lot of resiliency and we played a lot of snaps on defense.”

With the win, Class AAA No. 5 Huntington improved to 3-0 and handed the second-ranked Knights their first loss this season in three games.

On what proved to be the game-winning drive, Lochow rushed for 19 yards on fourth-and-6 from his own 38-yard line with 4:30 left.

Four plays later, facing fourth-and-7 from the Knights’ 40, Lochow connected with Felder on a corner post, and the wideout darted into the end zone.

“We executed when it counted,” Seals said. “Gavin made a big play on fourth-and-7 with his feet and then we run a little corner route with Amari and they kind of get lost on the coverage and we hit him for a touchdown.”

The third of three point-after kicks by Jonathan Aya-Ay upped the Huntington lead to four points, but Cabell Midland still had nearly 3 minutes and all of its timeouts.

The Knights picked up one first down on their ensuing possession, before Waynick intercepted Ryan Wolfe with 1:39 play.

“The defense, offensive line and wide receivers kept us in it,” Lochow said. “The first three quarters, I wasn’t playing great and they kept us in it. Shout out to them.”

The run-oriented Knights began the contest with a 12 play drive that ended with an Olivia Charles 25-yard field goal for a 3-0 lead at the 4:32 mark of the first quarter.

Midland’s second series ended on downs at the Huntington 22, and two plays later, the Highlanders took their first lead when Lochow found the speedy Waynick on a slant for a 75-yard touchdown 5:42 before halftime.

However, the advantage was short-lived as the Knights answered with a 78-yard drive that was capped by Chandler Schmidt’s 32-yard touchdown run at the 2:56 mark of the second quarter.

Cabell Midland made its 10-7 lead stand at halftime, though to that point, the Knights had 40 offensive plays compared to only 10 for the Highlanders.

“I don’t feel we got the offense the ball enough tonight, but when you play against what Midland runs, it’s difficult to get off the field,” Seals said.

Ten seconds into the second half, HHS went back on top without needing its offense to step on the field as Waynick returned the opening kickoff 70 yards to put his team in front 14-10.

“He goes hard all week and performs in every game,” Lochow said.

But the Knights answered again, needing eight plays to cover 80 yards and regaining the lead when Schmidt scored on a 46-yard run with 7:18 left in the third quarter.

Midland got the ball back with the 17-14 lead starting from its 1-yard line. The Knights had an 88-yard touchdown run by Levi Wiseman wiped out on a holding penalty. Still, they managed 17 plays on the drive, which ended with Wiseman being stopped for 1 yard on fourth-and-5 from the Huntington 35.

Jackson Fetty was the focal point of the Knights’ offense throughout and finished with 45 carries for 196 yards. Fetty had 27 rushes for 122 yards at halftime.

“Our defense got the stop at the end and kept us in it for three quarters,” Lochow said.