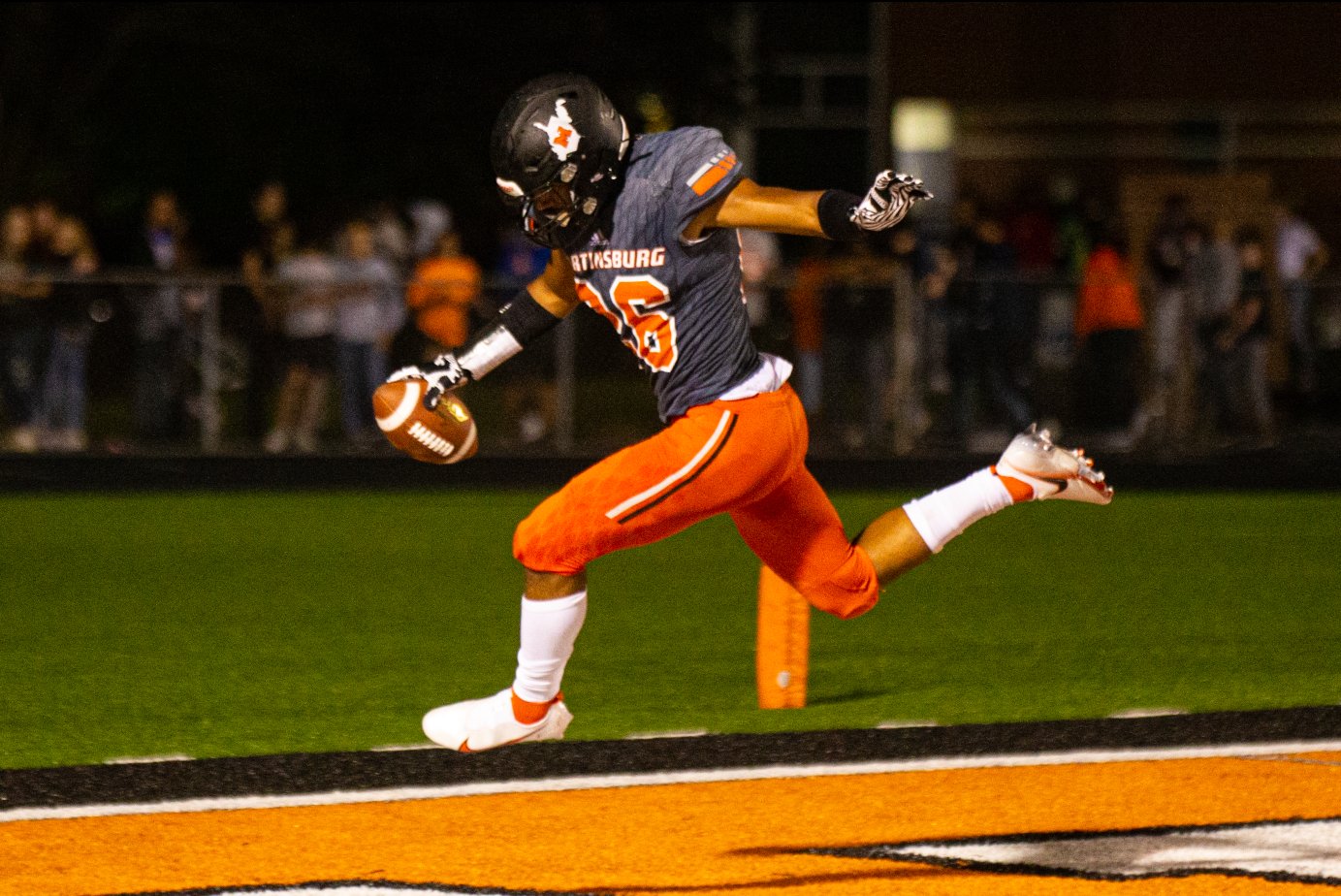 MORGANTOWN, W.Va. — Check out results from around West Virginia in week three of the high school football season.

BRIDGEPORT 54, Liberty Harrison 6: Cam Cole toted the ball for 219 yards and four touchdowns as Bridgeport improved to 2-0 with a win at Liberty Harrison. Cole scored on runs of 32, 39, 73 and 49 yards.

Ty Martin, Derek Starkey, Anthony Spatafore and Rowen Michaelis also found the end zone for the Indians. Trenton Tucker tossed a touchdown pass late in the first half for the Mountaineers (1-2).

MARTINSBURG 58, Sherando (Va.) 7: The Class AAA top-ranked Bulldogs outgained the Warriors 436-53 in the opening half and scored on all six possessions to roll to a victory.

Martinsburg (3-0) got two first-half touchdown passes from Ezra Bagent, while Murphy Clement completed three passes in the opening half, all of which went for touchdowns.

Clement also rushed for a 12-yard score in the first half.

Jacob Barrick hauled in two of the touchdown receptions.

Martinsburg’s Braxton Todd rushed for 172 yards in the opening half and added a 10-yard TD reception.

GEORGE WASHINGTON 35, Hurricane 14: Leading by a touchdown entering the fourth quarter, the Class AAA No. 7 Patriots pulled away to remain unbeaten.

GW (3-0) got a critical interception from Hayden Hatfield that helped lead to Klay Matthews’ 25-yard touchdown run with 6:35 remaining,

A 1-yard TD run by Keegan Sack allowed the Patriots to add to their lead down the stretch.

Abe Fenwick’s 1-yard rushing score late in the opening half broke a 14-all tie and put the Patriots ahead to stay.

PRINCETON 55, Oak Hill 30: The Tigers scored 34 unanswered points en route to their third victory in as many games. Grant Cochran completed passes to nine different receivers. The junior quarterback was 19-of-23 for 262 yards and three touchdown passes.

University will return to the northern panhandle to visit Wheeling Park next Saturday evening.

PARKERSBURG 28, Capital 20: Bryson Singer racked up 206 yards on the ground and scored all four Big Reds’ touchdowns as PHS claimed their first victory of the season.

PARKERSBURG SOUTH 61, Woodrow Wilson 13: The Patriots (2-1) scored three touchdowns on fourth down plays as they rebounded from their first loss of the season. Robert Shockey had five touchdowns for South (3 passing, 2 rushing).

HERBERT HOOVER 48, Nitro 0: Devin Hatfield caught a pair of touchdowns and intercepted three passes to help the Class AA No. 6 Huskies cruise by the Wildcats.

Hunter Bartley and Brendan Rash added rushing touchdowns in the win, while Dane Hatfield threw a TD pass to Nathan Harper in addition to his two touchdown tosses to Devin Hatfield.

Hoover (3-0) has surrendered only 23 points over its first three contests.

LOGAN 27, Wayne 20: The Wildcats broke an 11-game losing streak in the series and notched their first win over the Pioneers since 1943 to remain unbeaten.

Jordan Hayes passed for 196 yards and three touchdowns in the opening half, with two of the scores going to Carson Kirk.

Kirk finished with 103 receiving yards for the Wildcats.

Hayes also had a 3-yard rushing touchdown for Logan’s only second-half score.

Kobe Vanhoose returned the opening second-half kickoff 98 yards for a TD and scored the game’s final touchdown on a 48-yard run for the Pioneers, who fell to 1-2.

SCOTT 48, Sissonville 21: The Skyhawks improved to 2-1 thanks in large part to the play of quarterback Matt Frye. He tossed three touchdown passes. Brody Thompson answered with 209 passing yards and three touchdowns for the Indians.

Hamric added 76 rushing yards in the win, which allowed the Titans to improve to 2-1.

Colten Hall carried 20 times for 136 yards and scored once, while adding 56 receiving yards and a fumble recovery in the win.

Avery Chapman was Hamric’s favorite target and finished with seven catches for 141 yards and three TDs.

The Titans and Tigers are both now 2-1.

RITCHIE COUNTY 50, Wahama 48 (OT): The Rebels (2-0) rallied from a 20-point deficit and never led in the game until the decisive two-point conversion in overtime. Junior quarterback Ethan Haught passed for 326 yards with four touchdown tosses and he ran for 105 yards and three more scores. Gus Morrison accounted for 91 all-purpose yards and two receiving touchdowns. Marlon Moore and Garrett Cunningham also had receiving touchdowns for the Rebels.