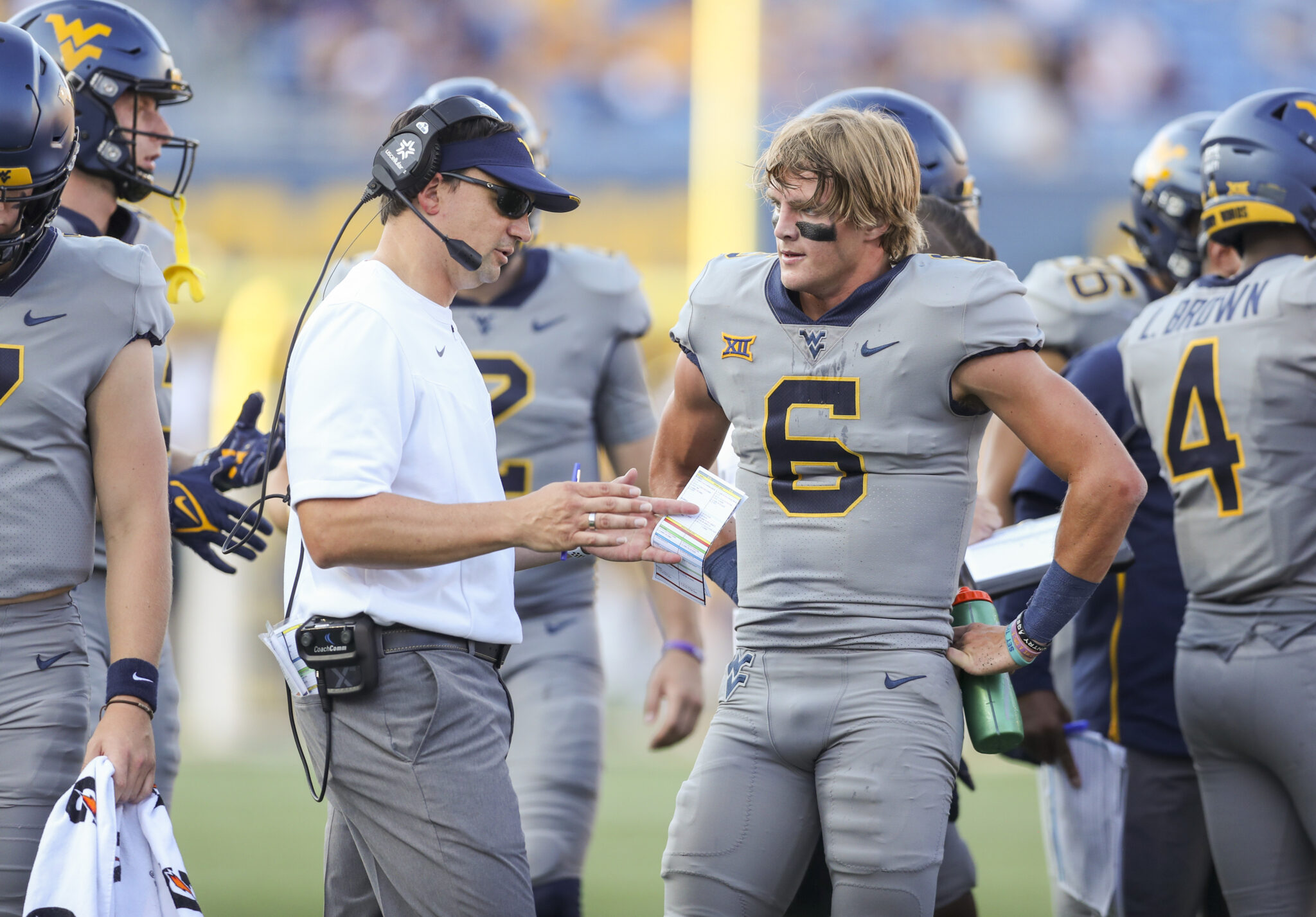 MORGANTOWN, W.Va. — It’s not uncommon for a backup quarterback to be one of the more popular players among a team’s fanbase.

Such was the case for West Virginia last week after starting quarterback Jarret Doege endured struggles in the Mountaineers’ 30-24 loss at Maryland.

Combined with the fact Doege was benched for poor performance in the 2020 season finale, his showing against the Terrapins added fuel to those in favor of seeing Garrett Greene given a chance behind center.

Those wishes were granted in Saturday’s home opener against FCS member Long Island. Greene played WVU’s third series of the game and three more during the second half of the Mountaineers’ 66-0 victory over the Sharks.

Greene finished 4-of-7 for 57 yards passing and led all players with 98 rushing yards, while scoring touchdowns on two of his 14 carries.

“He did some good things,” head coach Neal Brown said. “Was he perfect? Absolutely not. He did a good job managing the environment. You have to remember, this is the first time he’s really played with people in the stands. He played a lot against Eastern Kentucky last year, but there wasn’t anybody here. He handled the elements well. He just has to shore up a few things.”

Greene was informed Monday he’d take over to start the third series. West Virginia already led 21-0 when that time came.

The redshirt freshman from Tallahassee, Florida then helped guide a 13 play, 69-yard drive that he capped with a 3-yard touchdown run — the first TD of Greene’s career.

His lone completion on three passing attempts during the possession went to Isaiah Esdale for 28 yards. Greene also rushed six times for 34 yards and used his feet to score, adding a dimension to the offense Doege rarely provides.

“Good to see Garrett out there making plays,” Doege said. “He does that in practice and it’s good to see him do it in a game.”

To Doege’s credit, when he took back over, the senior led WVU on a 56-yard scoring drive and finished it with an 18-yard TD pass to Sam James.

Greene quarterbacked three possessions in the second half, the first of which came just before the midway point of the third quarter. At that point, WVU led 52-0, and Greene went on to guide his second scoring drive — this one 54 yards in seven plays. Greene finished it by scoring on a 13-yard run on third-and-7.

He was 3-for-3 passing in his second series, connecting with true freshman wideout Kaden Prather for 23 yards and finding Sam Brown twice for a total of 16 yards.

“We practiced only his set of plays all week and third down plays. The intention was to get him in the game early. Depending on how it went, we knew he’d get several snaps. I just didn’t know when that was going to come — end of the first half or middle of the third quarter. We felt really good about him getting a bunch of snaps. The only time I got after him is when he forgot to go out there one time.”

A 25-yard run by Greene helped WVU reach the red zone on his third series, but it ended with the Mountaineers losing a fumble for their only turnover. While Greene was charged with the fumble, it appeared to happen as a result of Jordan White’s high snap.

Greene again got WVU in position to score on what would be his final series of the contest, but the Sharks got a stop with WVU facing fourth-and-1 from the Long Island 2-yard line.

Brown said he’d have a better evaluation of his performance during his weekly press conference Tuesday after he was able to review film.

“The drive where we didn’t get it on fourth-and-1 inside the 5, I didn’t think he should have pulled it on a run,” Brown said. “But I try not to be too critical of him until you watch it on film and have a little better view on it.”

Greene’s role moving forward remains unclear, but there’s no denying the 5-foot-10, 193-pound QB can provide a different look to the Mountaineers’ offense.

The presence of Greene forces opposing defenses to game plan for another dimension and makes it tougher on them against run-pass options thanks in large part to his mobility.

“It’s a growth process with him,” Brown said. “His spring was up and down. We felt like he had a better summer, but in fall camp, it was still up and down and not as consistent as we’d like to see. We didn’t think he was ready to play in the opener. We knew he was going to get some playing time here. We’ll go back and evaluate the film and if his play here and through the week warrants that he gets an opportunity in situations, then yes we will use him. He can help us.”