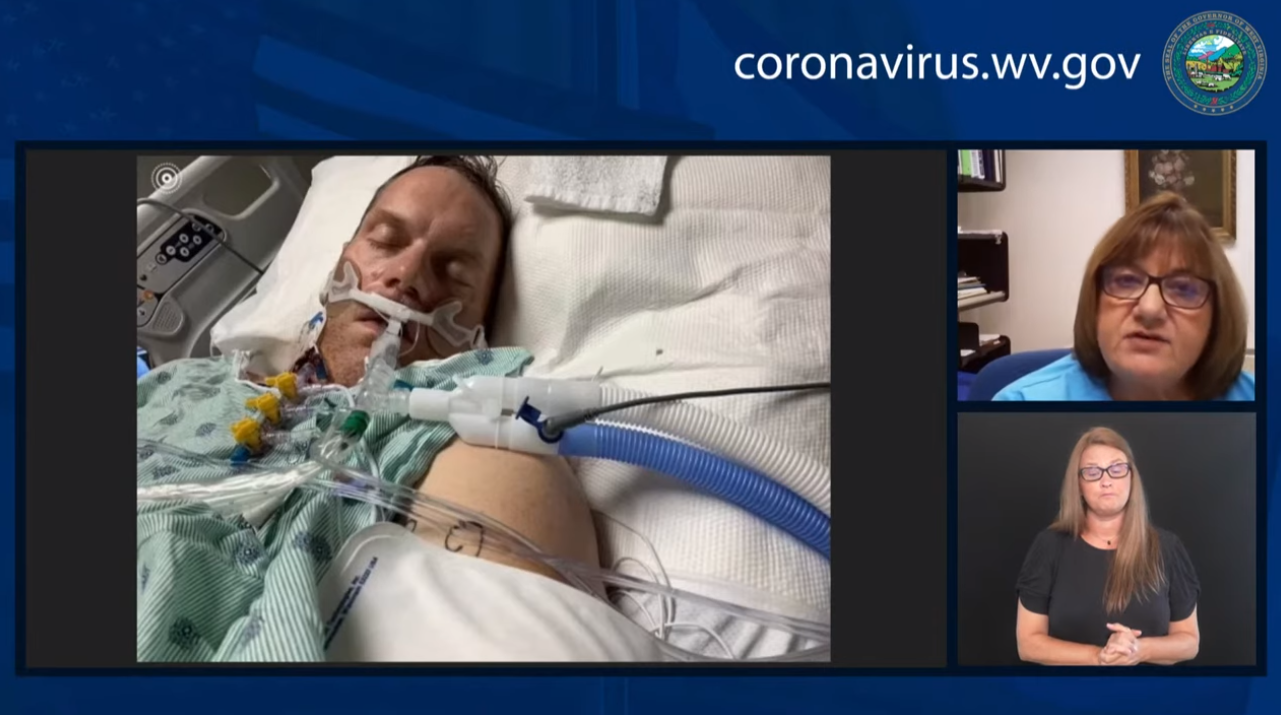 Linda Lanier, top right, shared her story of her son Joey, left, being in the hospital with COVID-19.

CHARLESTON, W.Va. — A West Virginia mother pleaded with the public who has not received a COVID-19 vaccine to do so, as she told the story of her 40-year old unvaccinated son who has the virus and is fighting for his life.

Linda Lanier, the mother of Joey told the story during Gov. Jim Justice’s Monday COVID-19 briefing. She asked the public to do its part during the pandemic by getting vaccinated, wearing a mask and having social distance.

Lainer blasted social media and other outlets for “spreading lies” about the virus and vaccination, which she said her son believed.

“He decided not to get vaccinated. I hope by sharing his story that it will change some people’s minds,” Lanier said.

She said her son, the general manager of the Kanawha Falls PSD, herself and her husband contracted COVID-19 during a July trip. She noted the trip destination featured indoor and outdoor facilities with no social distancing, no masks and no ventilation.

Lanier said she and her husband ended up with the virus as well but did not have the issues Joey faced because both of them were vaccinated. Lainer said her son was removed from the ECMO (extracorporeal membrane oxygenation) after five weeks but has remained sedated on a vent to this day.

Lanier added that Joey’s two sons, Jason and Jackson, have both faced difficult times for missing their dad.

Her plea came as Senate Majority Leader Tom Takubo, who is also a pulmonologist, urged West Virginians to get vaccinated from COVID-19 during the briefing.

Lanier said, “Before Joey got so sick that he couldn’t talk, get vaccinated. You don’t want this stuff. Several of his friends have been vaccinated since then.”

West Virginia set a new pandemic high for hospitalizations in new numbers released Monday afternoon by the state Department of Health and Human Resources. Hospitalizations are now at 852 statewide. The previous high was 818 on Jan. 5. COVID patients being treated in intensive care Monday numbered 252 with 162 of them on ventilators, both pandemic highs.