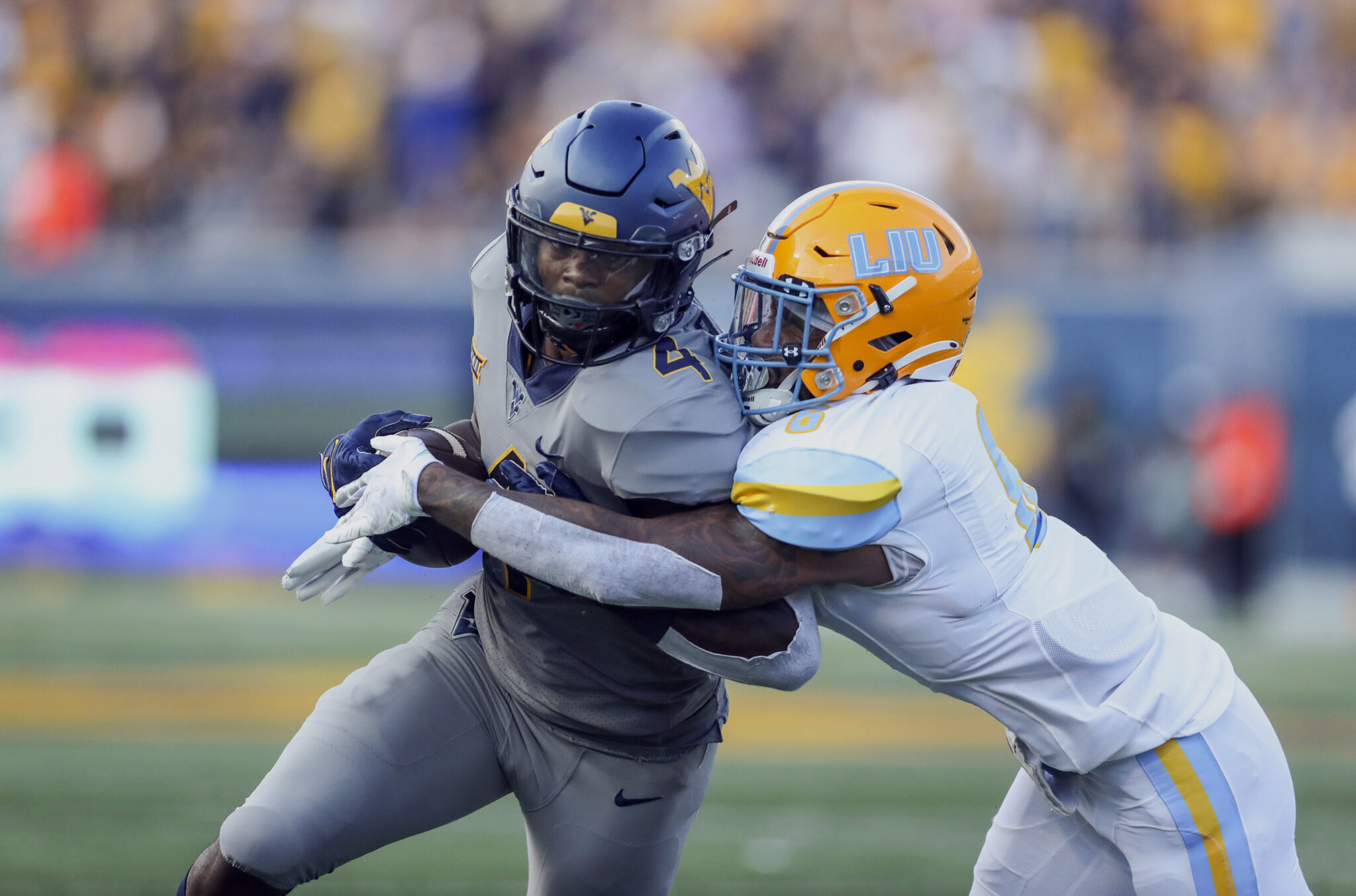 MORGANTOWN, W.Va. —Two games into his senior season, running back Leddie Brown leads West Virginia with five touchdowns, four of which he’s scored on the ground.

Brown was responsible for the Mountaineers’ first five offensive TDs this season spanning the opener at Maryland and first quarter last Saturday against Long Island.

His rushing output, however, has been a different story.

Brown has 104 yards on 32 carries and the struggle to get the tailback going is evidenced in the Mountaineers’ ranking 99th of 130 Football Bowl Subdivision teams with an average of 123 rushing yards.

“We’re going to have to go back and look at the film and see what we can do,” WVU quarterback Jarret Doege said. “One of the things we’ve talked about is being a tough, physical team that doesn’t beat ourselves.”

Since the start of the second half at Maryland, Brown has 51 yards on 21 attempts. The Philadelphia native has also yet to carry the ball in the fourth quarter this season.

Against an inferior opponent last Saturday, Brown managed only 31 yards on 15 attempts, though he did score twice on short runs.

“We didn’t want to get Leddie a ton of work, but we would’ve liked to give him some more room on some of his carries,” WVU head coach Neal Brown said. “That was probably the only disappointing thing offensively.”

The team totals suffer from the minus-28 yards from quarterback Jarret Doege, who has been sacked five times for a loss of 42 yards. But they’re also aided by the performance of second-string QB Garrett Greene in the win over the Sharks, as the redshirt freshman led all players with 98 yards and 14 attempts.

The Mountaineers finished with 198 rushing yards on 55 rushes against Long Island, though outside of Greene, the other 41 runs gained 100 yards.

“We pass protected well. We started finally getting some runs in the third quarter,” Neal Brown said. “We didn’t scheme a bunch of things this week. I really do believe they’re well coached and I was impressed schematically with what they’d done.

“They did a good job of moving and twisting, which they hadn’t shown on film. They did some things that our defense does. Credit to them.”

WVU did find more success on the ground in the second half, rushing for 124 yards, though nearly half of that (60) was Greene’s output.

“We went into half and said, ‘Here’s a couple things the way they’re attacking our back placement’, and we ran the ball much better in the third quarter. “But we have to continue to run the football better. It was tight quarters in there in the first half.”

Getting the ground game on track won’t be an easy task Saturday against Virginia Tech.

The Hokies rank 43rd in the country allowing 106 rushing yards on average and have held their first two opponents to 3.2 yards per rush.

Virginia Tech’s front figures to pose a difficult challenge for the Mountaineers and the Hokies haves combined for nine sacks and 18 tackles for loss in victories over then-No. 10 North Carolina and Middle Tennessee. Having allowed 24 points in its first two games, V-Tech is tied for 18th best in scoring defense.

“I look forward to our practices this week and the opportunity next week in front of a big, TV audience,” coach Brown said, “and what I hope and expect to be an electric crowd on Saturday at noon.”

There has been no bigger bright spot for the Mountaineers over the first two games than the play of Winston Wright Jr. on the kickoff return team.

One week after setting a single-game program record with 217 kickoff return yards against the Terrapins, Wright took the opening kickoff 90 yards for a touchdown to set the tone in the win over the Sharks.

Doege could hardly believe his eyes.

“Did they really kick it to him is what I’m thinking in my head,” Doege said. “Everybody on the sidelines thought if they were going to give him a chance, he was going to take it to the house.”

As a result of the shutout victory, that was the only kickoff return for Wright, a junior a wide receiver. The Savannah, Georgia native is first in the country with 307 kickoff return yards and is averaging 51.1 yards on his six returns.

In addition to the second career touchdown on a kickoff return, Wright also has returns of 98 and 48 yards this season. The 98-yard return at Maryland is the longest non-scoring return in program history.

“This year, I took more time into meeting with [assistant coach Chad Scott] and the special teams coaches,” Wright said. “I understand the scheme way more than I did last year. That’s the biggest difference.”

West Virginia’s first Big 12 Conference game September 25 at Oklahoma will start at 7:30 p.m., and be televised by ABC.

The Mountaineers (1-1) and third-ranked Sooners (2-0) did not play last season.

Oklahoma has won eight straight in the series dating back to when West Virginia began playing in the Big 12 in 2012. The Sooners have scored at least 44 points in seven of those games, and more than 50 in four straight against the Mountaineers. That includes a 52-14 victory in the most recent 2019 matchup in Brown’s first season at WVU.

After getting all it could handle from Tulane in a 40-35 season-opening win, Oklahoma put it on Western Carolina, 76-0, last week. The Sooners welcome Nebraska on Saturday for their final non-league game.