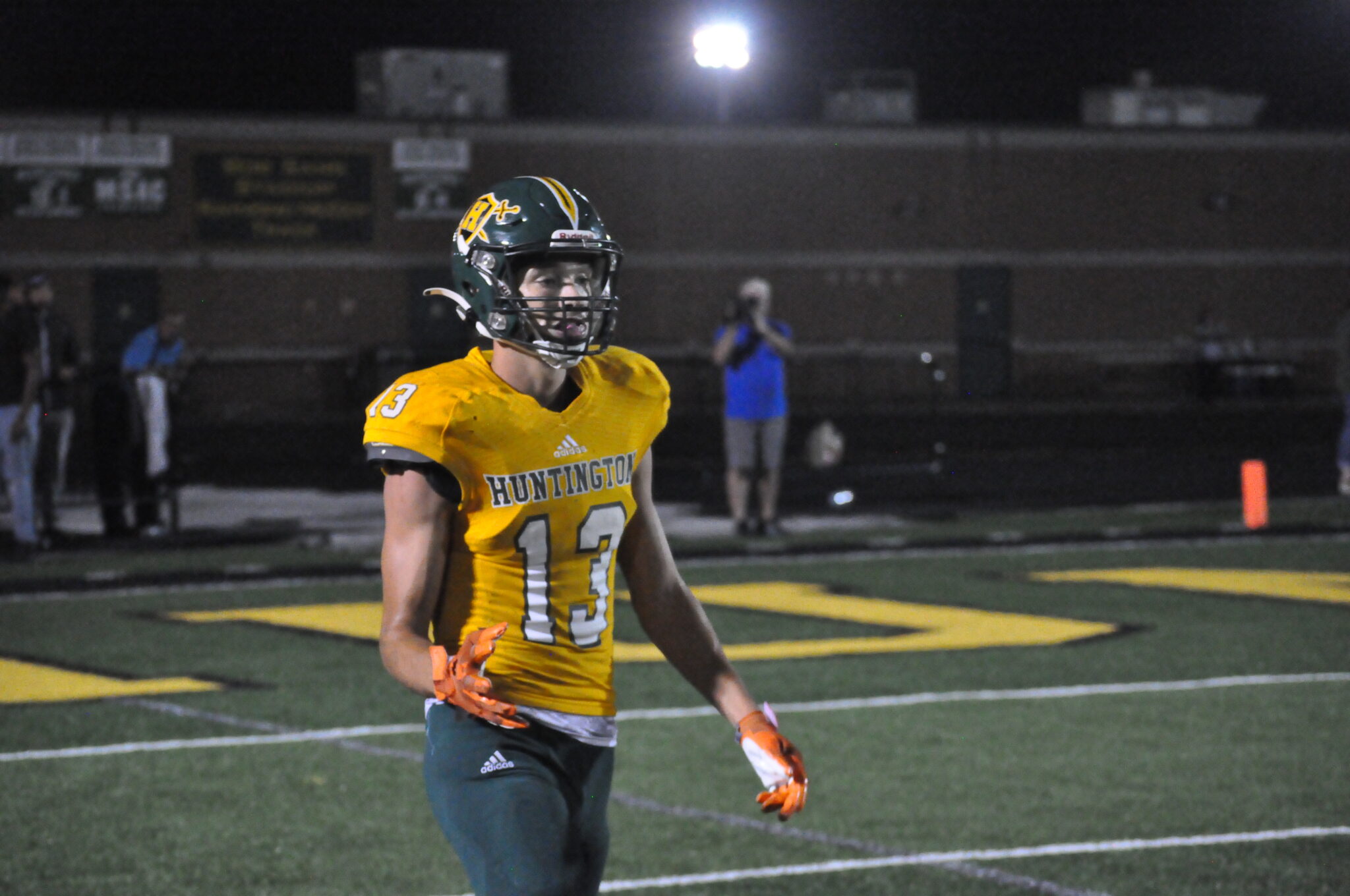 Noah Waynick scored on a reception and a kickoff return and came up with a late interception to help Huntington beat Cabell Midland. Photo by Greg Carey/WVMetroNews.com

HUNTINGTON, W.Va. — Moments after Huntington wrapped up a 21-17 victory over Cabell Midland last Friday, Highlanders’ players joined in celebration with classmates near the team bench.

The coaching staff, including head coach Billy Seals, could hardly contain their excitement over a marquee win in the rivalry known as The Battle for the Shield.

It improved the Highlanders’ all-time mark against the Knights to 9-17, while allowing them to reclaim the shield and prolong an unbeaten start to the season.

Perhaps so, although after finishing 12-1 with a state semifinal appearance in 2017, the Highlanders were 16-16 with one playoff win over their next three seasons.

Each of the last two years, Huntington had a losing record, including a 3-6 mark with no postseason appearance in 2020.

For as much as Seals was elated to see his team need only three contests to equal its win total from last season, he also wanted to do his part to prevent the memorable victory from being the end all be all of the 2021 campaign.

After all, another tough test awaits Friday in unbeaten George Washington.

“Our guys understand that we enjoy it for 24 [hours] and go back to work and know that we have a lot of improvements to make,” Seals said. “Finishing 3-6 does that to you. The kids said it in the locker room — ‘We can be better.’ The attitude those guys have is that we can be better and a much-improved football team. We just have to continue to work each and every day to be the best football team we can be.”

The Highlanders have made a strong impression over the 3-0 start that leaves them No. 2 in the season’s first playoff ratings released Tuesday by the West Virginia Secondary School Activities Commission.

A pair of dominant defensive performances led to a 47-7 victory over Parkersburg and a 38-0 triumph at Hurricane over the first two weeks.

Then came the win over the Knights in a matchup of teams with aspirations of playing in the Super Six.

Lochow delivered down the stretch. With the Highlanders trailing 17-14 late, the quarterback extended the game-winning drive with a 19-yard run on fourth down, before throwing a 40-yard touchdown pass to Amari Felder on another fourth down.

On the ensuing Midland drive, Huntington senior Noah Waynick intercepted a pass to give the Highlanders the ball back late. Lochow followed it by sealing the verdict with another first down run.

“The defense got the big stop and really the defense and our special teams kept us in it for three quarters,” Lochow said.

It was a fitting ending to a special night for Waynick. After hauling in a 75-yard touchdown pass from Lochow for the Highlanders’ first touchdown, Waynick returned the opening kickoff of the second half 70 yards for another score.

Although Midland answered with a touchdown drive to regain the lead, Waynick’s return marked a swing in momentum after the Knights led 10-7 at halftime. The contest was close throughout, but CMHS controlled the game to that point as evidenced by its 40 offensive plays to Huntington’s 10 in the first half.

“We refer to him on our team as ‘The Dog’, because he’s a guy that has made plays for three years now,” Seals said of Waynick. “A tough football player and he doesn’t get enough credit for how good he is. He comes to work every day. During the JV games, he goes up in the press box and films, so they can have film to watch after the game.

“A team player and we’re really proud of Noah and what he’s been able to do in our program. We’re looking forward to finishing this year well and then looking at his future endeavors and playing college football.”

Now the challenge for Huntington becomes handling its early season success and preventing complacency from setting in. The Highlanders are set up nicely to not only have a winning record, but position themselves to stay at home through at least two rounds of the postseason.

But with contests remaining against GW, Spring Valley and South Charleston — three teams with a combined 8-1 record to this point — things can change fast.

Staying grounded will be imperative for Seals’ team, which has proven its worth early on and hopes to continue its climb to get back to the state’s elite programs.

“We try to focus on being 1-0 every week and work hard in practice all week,” Lochow said. “That way we come in ready to play.”