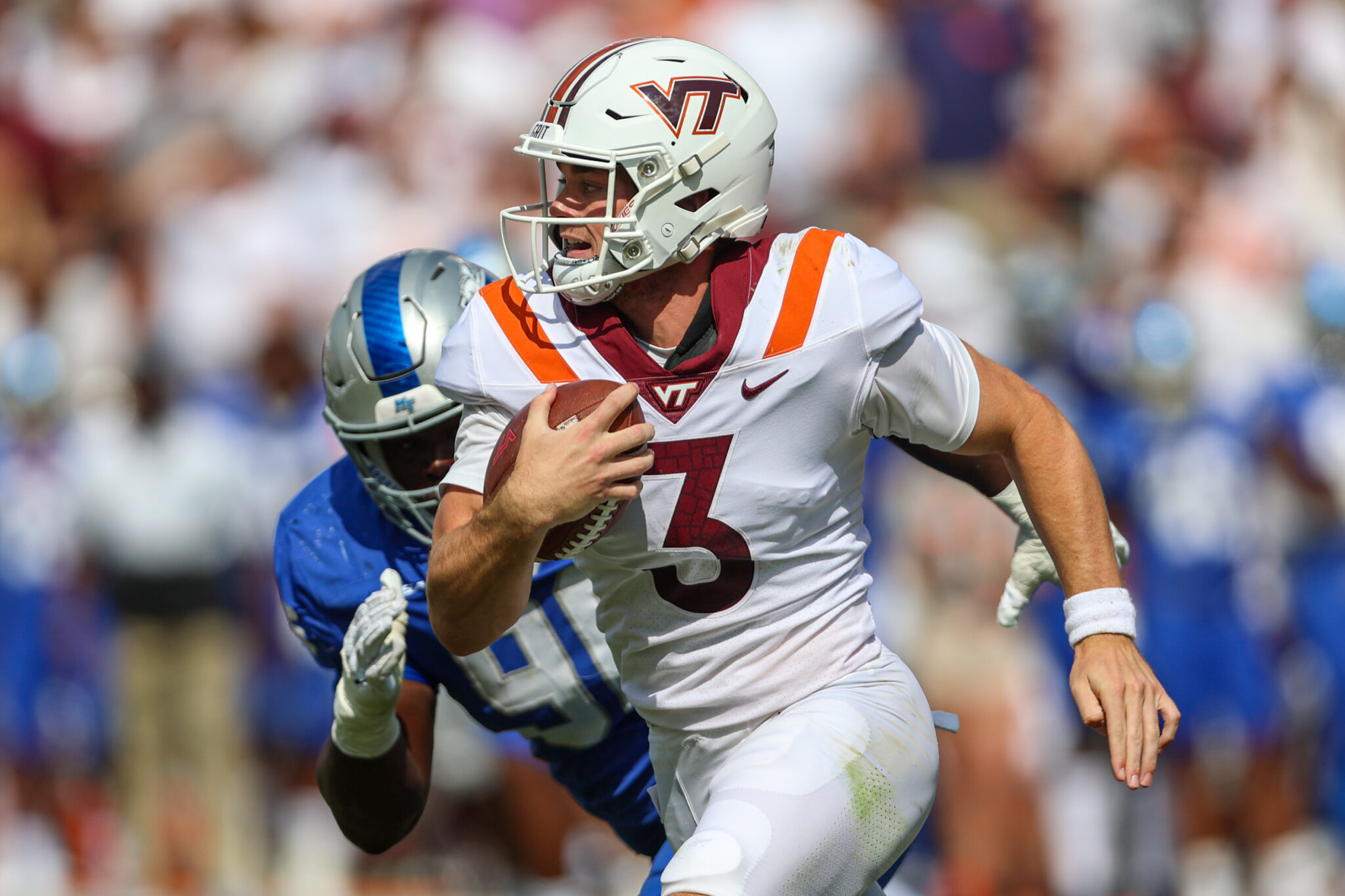 That will change Saturday when the 15th-ranked Hokies play a noon game at Milan Puskar Stadium that will be televised on Fox Sports 1.

Although the Mountaineers’ final non-conference contest of 2021 will mark a new opponent for Brown, the third-year WVU coach believes he has a good idea what the Hokies aspire to do offensively.

Over its first two games, Virginia Tech has run on 81 of its 128 offensive snaps. Four Hokies have at least 10 rushing attempts, while six have gained at least 22 rushing yards.

At the forefront of the team’s ground attack is redshirt junior quarterback Braxton Burmeister. The 6-foot-1, 205-pound signal caller has 94 rushing yards and one touchdown on 17 attempts.

According to Virginia Tech’s game notes, Burmeister was clocked at 22.53 miles per hour via GPS tracking technology during offseason workouts.

“He’s running away from people and you don’t see that a whole lot at quarterback,” Brown said. “He has really good, top end speed. He has a big arm and he’s making a lot of throws that you don’t see.”

Running backs Jalen Holston and Raheem Blackshear are key pieces of the ground attack. Holston has 80 yards and a touchdown on 18 carries, while Blackshear has rushed 21 times for 69 yards and a pair of scores.

There’s also quarterback Connor Blumrick, who rushed three times for 38 yards and a touchdown in last Saturday’s victory over Middle Tennessee. The 6-foot-5, 215-pound Blumrick provides a change of pace, somewhat similar to what Hendon Hooker did for the Hokies in extended action last season before transferring to Tennessee.

“[Blumrick] is a bigger kid and athletic kid,” Lesley said. “They use him in what we call mash sets. They did that a lot last year also. They have that capability.”

The Hokies have rushed for 343 yards and 4.2 yards per carry through two games, while five of their seven touchdowns are on the ground.

Mitchell’s loss will be felt in both running and passing sets, though the Hokies do have experienced tight ends behind him.

“It’s one of few places where we have veterans backing up veterans,” Fuente said. “James is a unique person. There’s no replacing him. It’ll have to be a group effort certainly.”

West Virginia allowed Maryland to run for 164 yards in a season-opening loss, before holding an inferior Long Island team to 35 rushing yards.

“We’re doing some good things, but we have to be better fundamentally,” Lesley said.

The Mountaineers present their own challenges to the ground-oriented Hokies, and the play of West Virginia defensive linemen Dante Stills and Akheem Mesidor stands out to Fuente.

“Their defensive line stands out,” he said. “Particularly 55 [Stills] and 90 [Mesidor]. They’re very disruptive and moving every play. They’re in the backfield it seems like all the time. It starts with that and it’s kind of a unique scheme. It bleeds through to the rest of their secondary and their linebacker corps. Those guys up front make the whole thing go.”

Another challenge facing the Hokies is the environment that awaits in Morgantown.

Saturday’s battle for the Black Diamond Trophy marks Tech’s first road game this season and its first contest as the visitor in a natural road setting since the start of the pandemic.

“We should relish the opportunity to play in a game like this with the tradition that these two teams have,” Fuente said. “Not just the trophy, but the things that are at stake in this game. It’s an awesome opportunity. This is why you do all that work in the offseason. We should relish the opportunity, but we also have to understand we can’t get carried away with it. When you play on the road in a hostile environment, it just enhances all your feelings and emotions.”