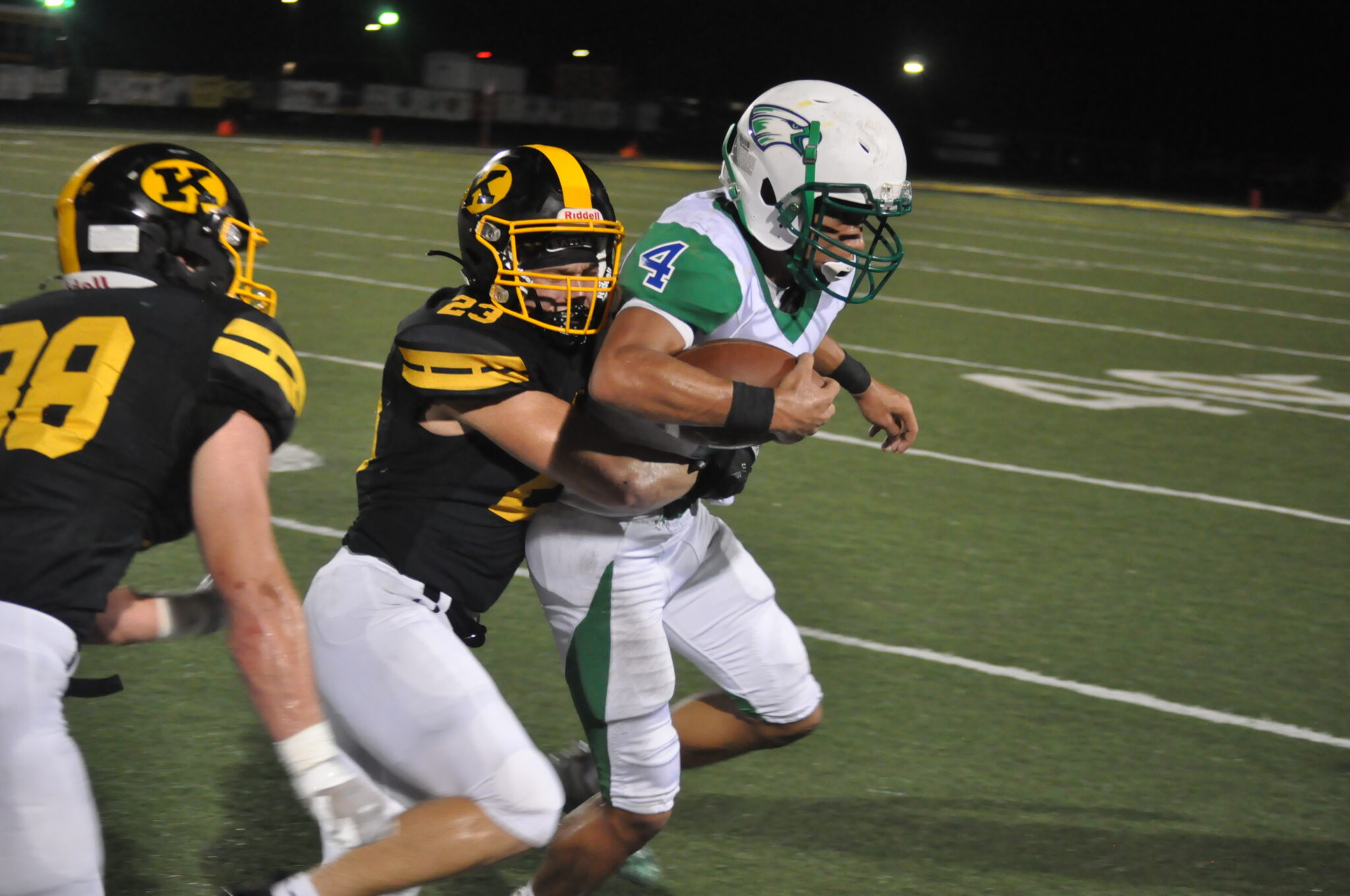 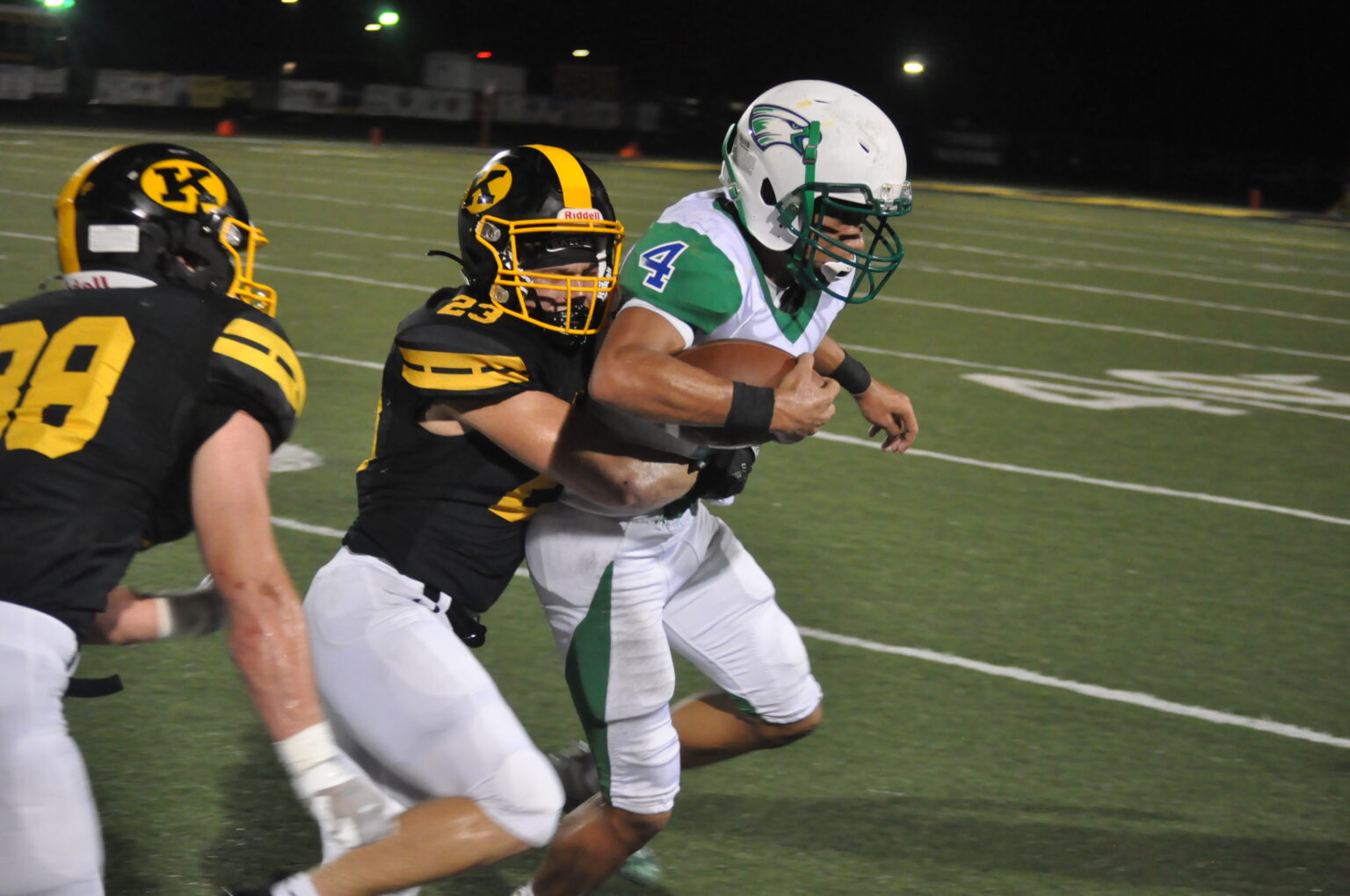 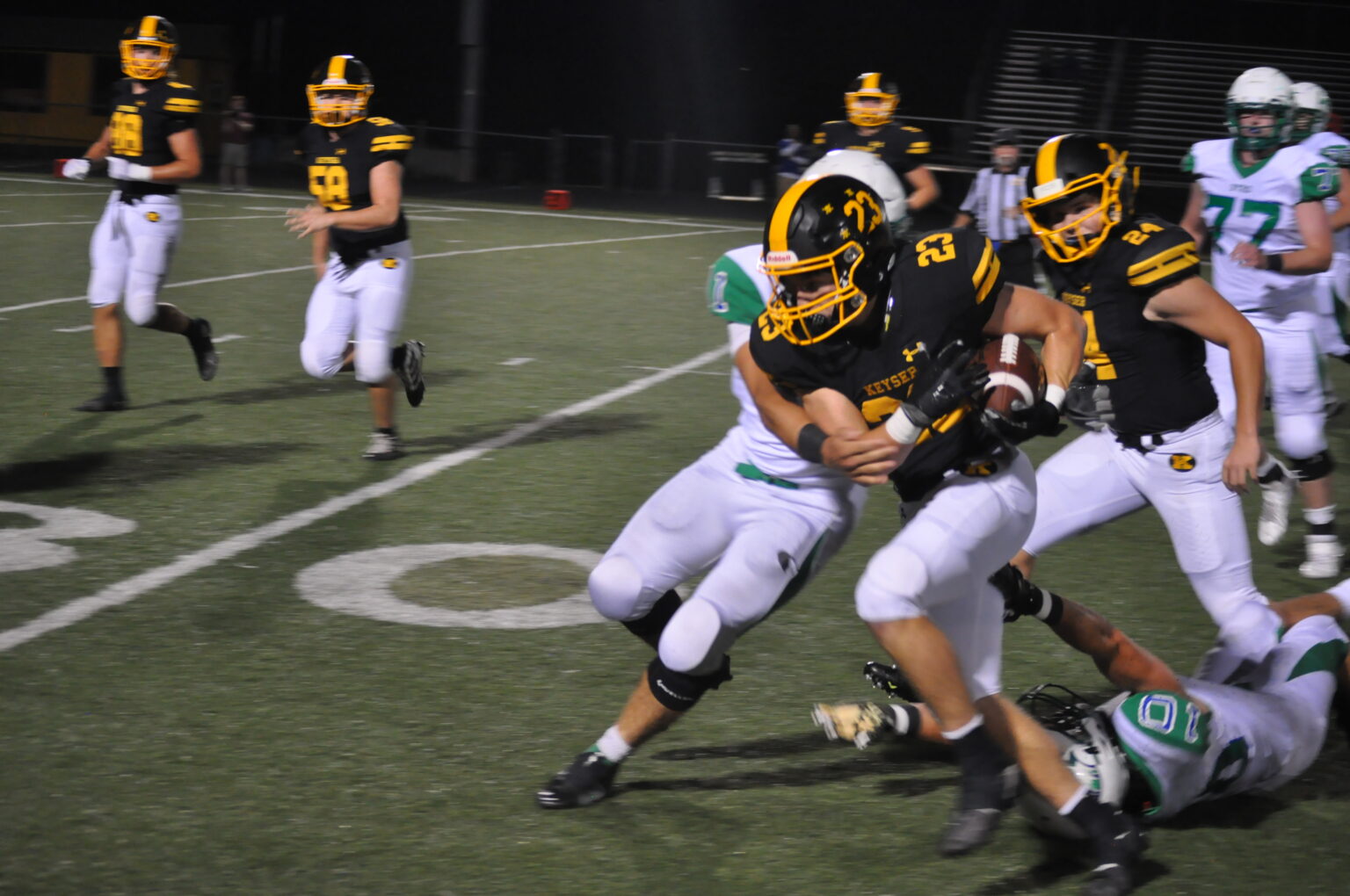 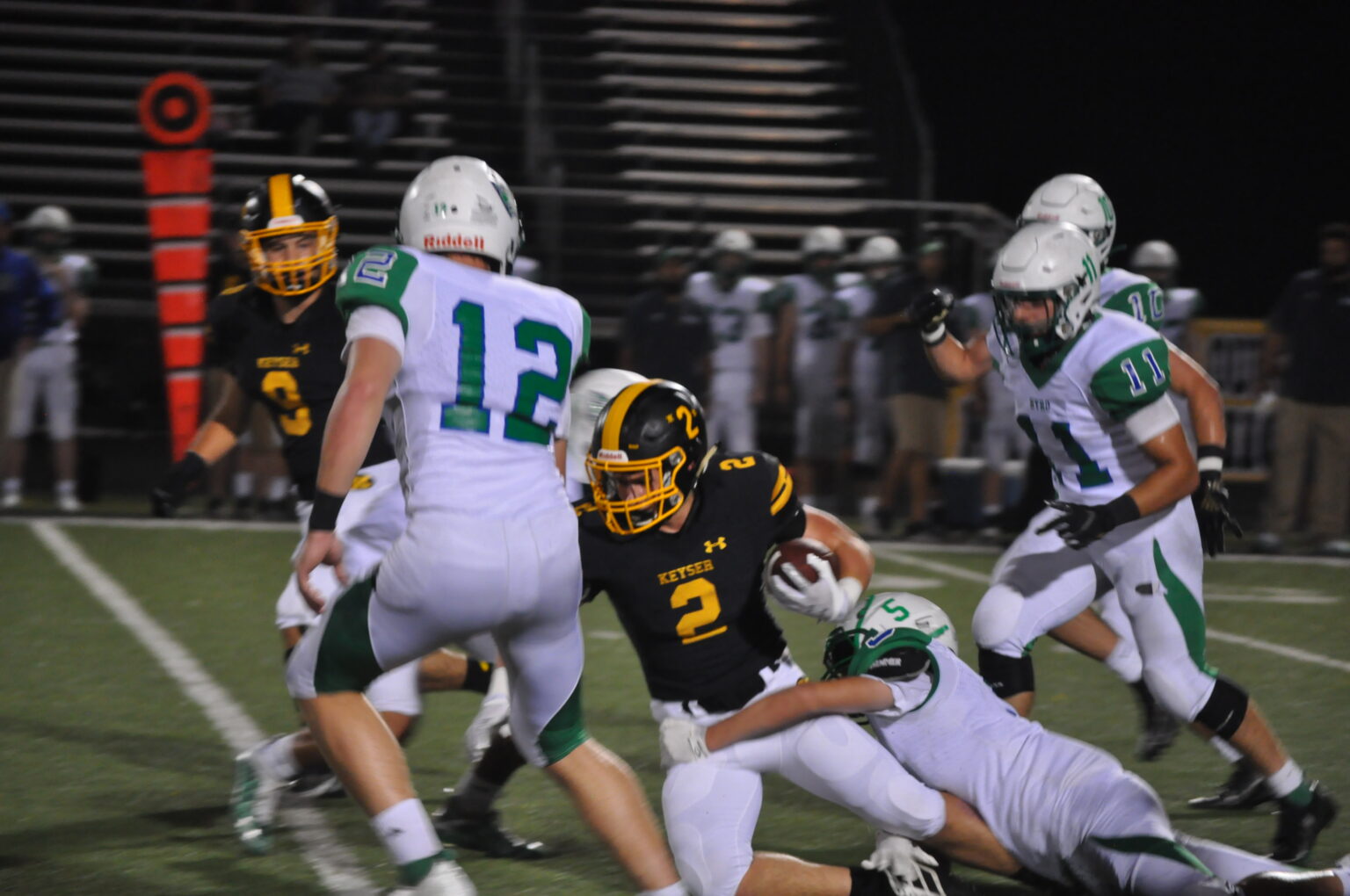 Keyser's Benny Oates is brought down. Photo by Greg Carey/WVMetroNews.com 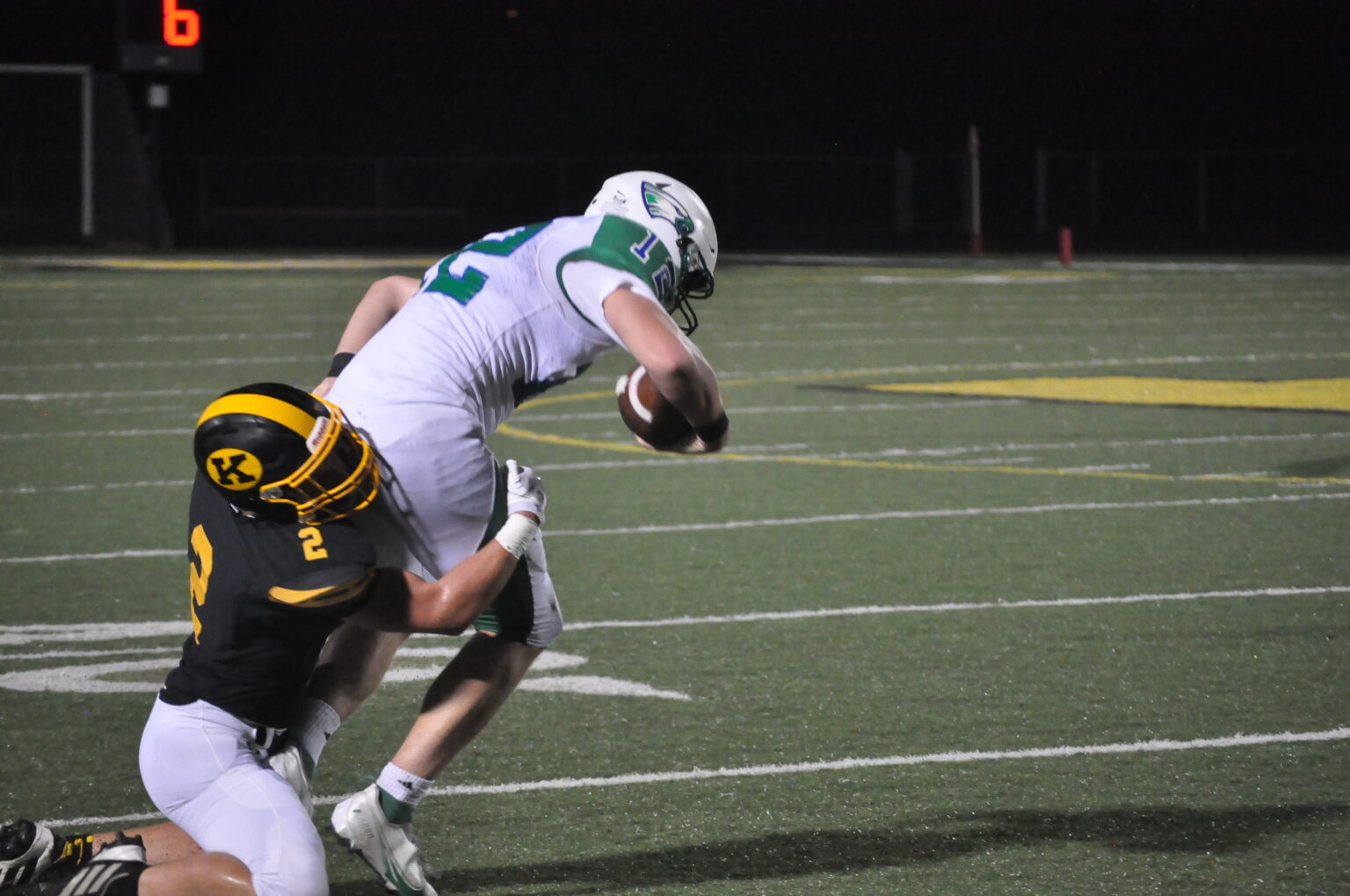 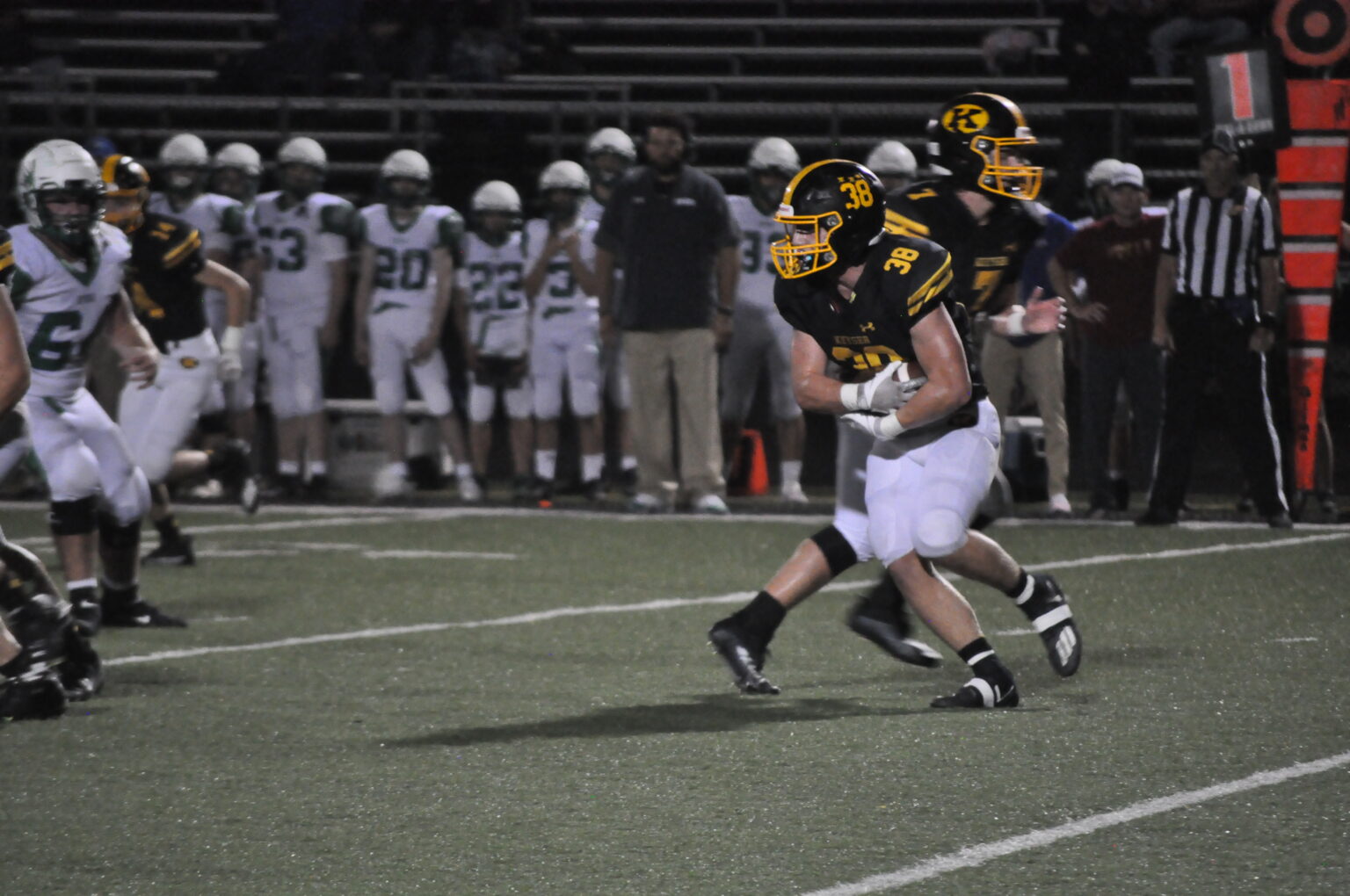 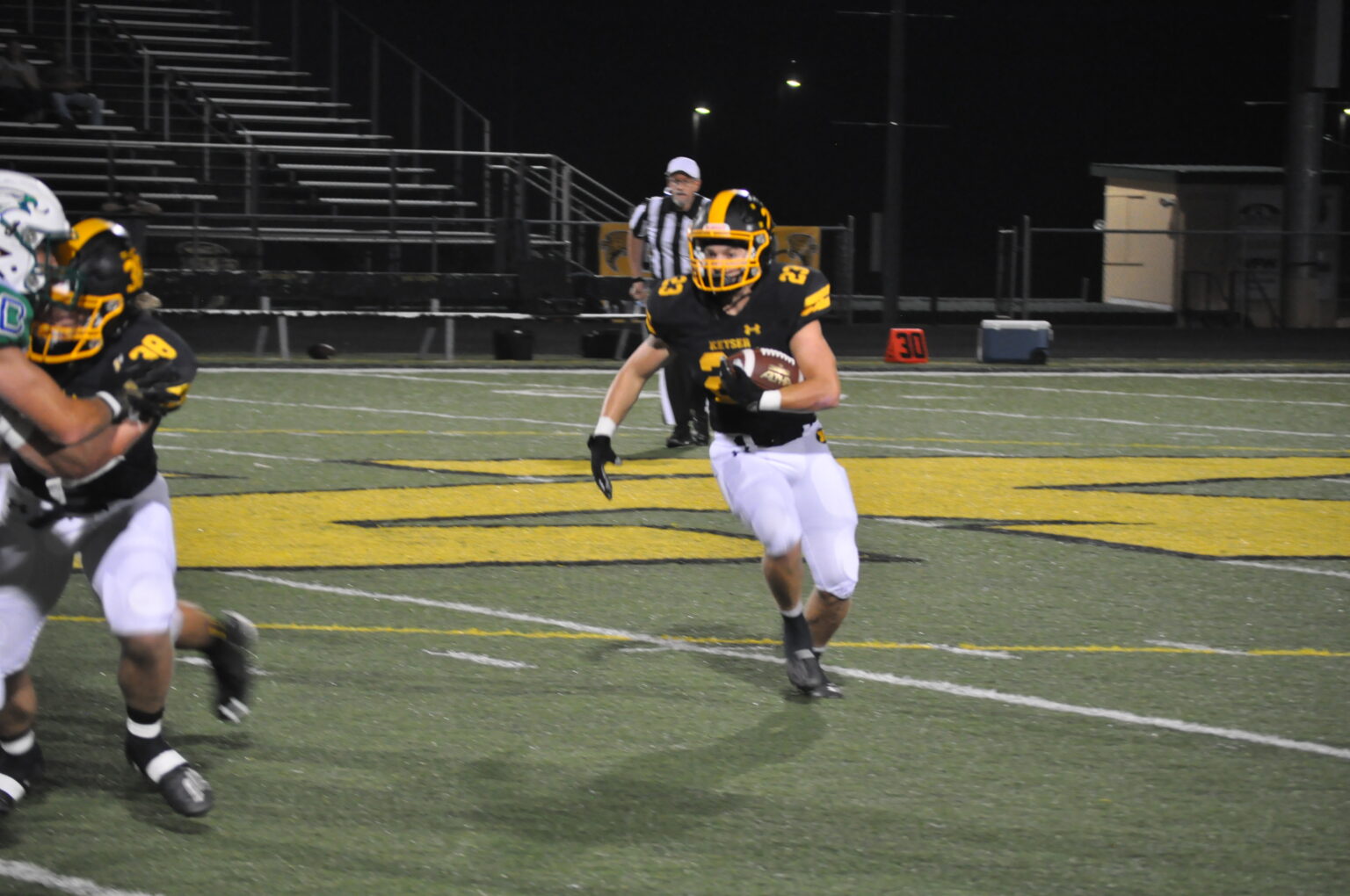 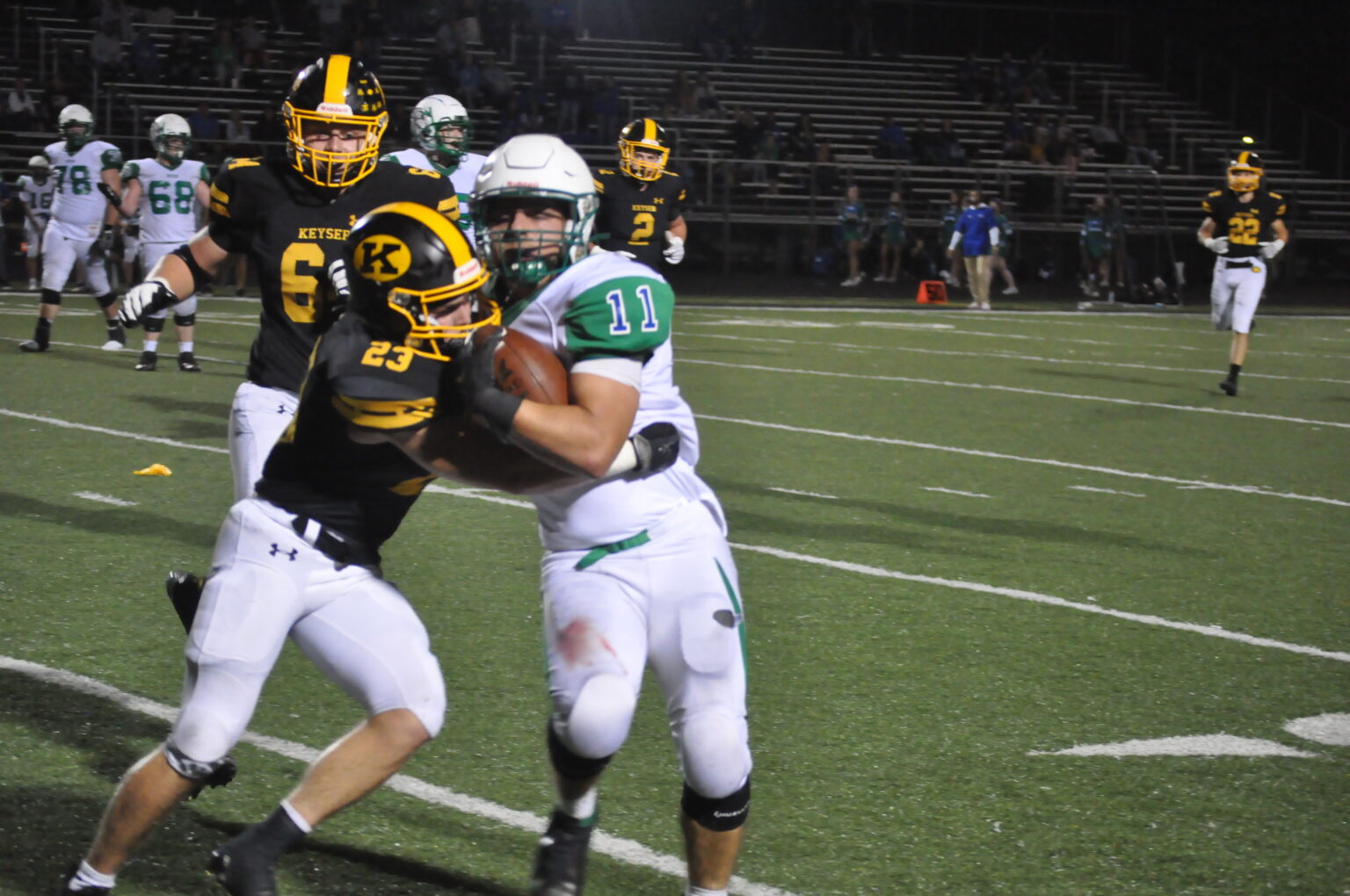 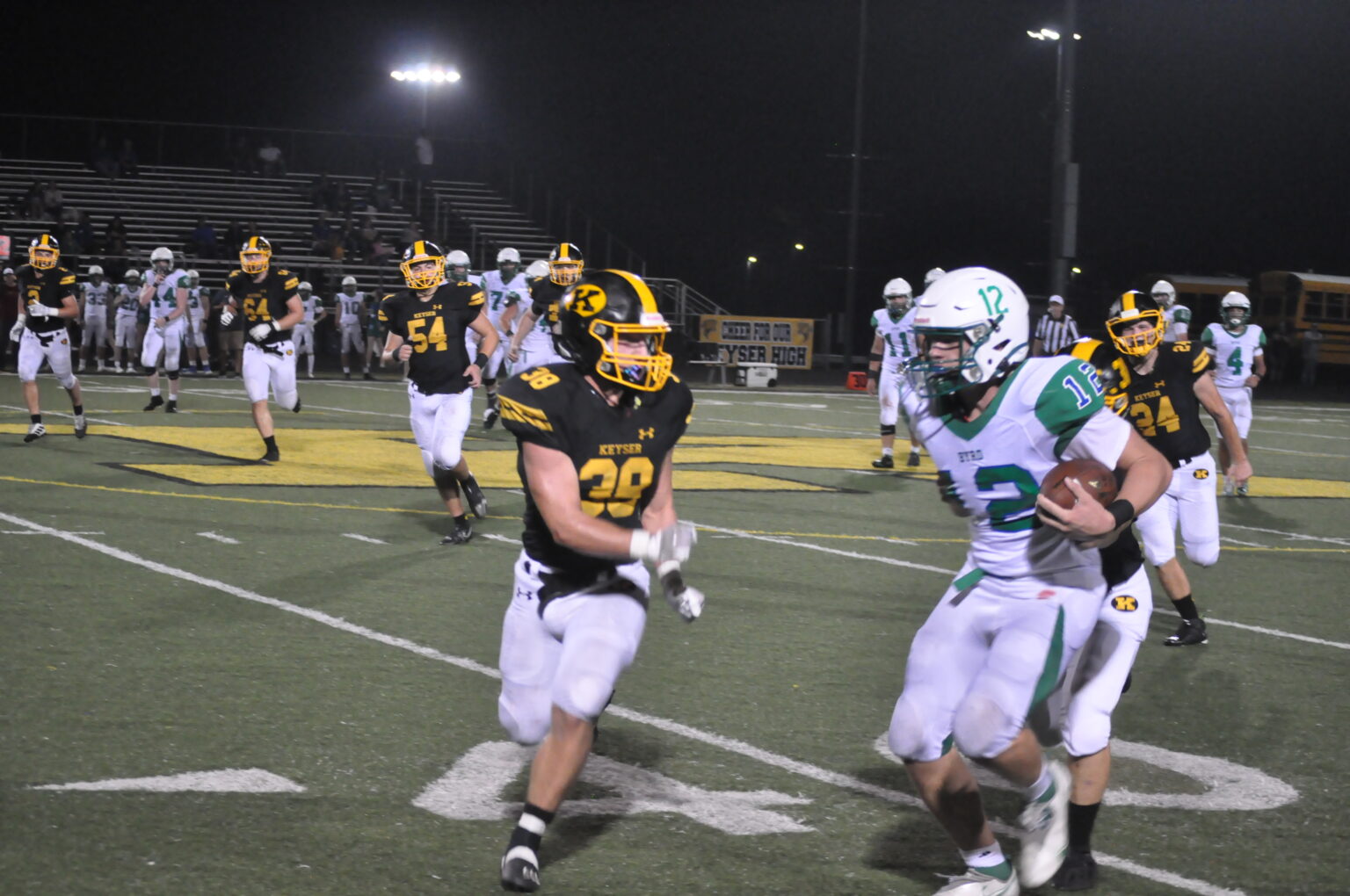 Nathaniel Junkins picks up yardage on a reception. Photo by Greg Carey/WVMetroNews.com 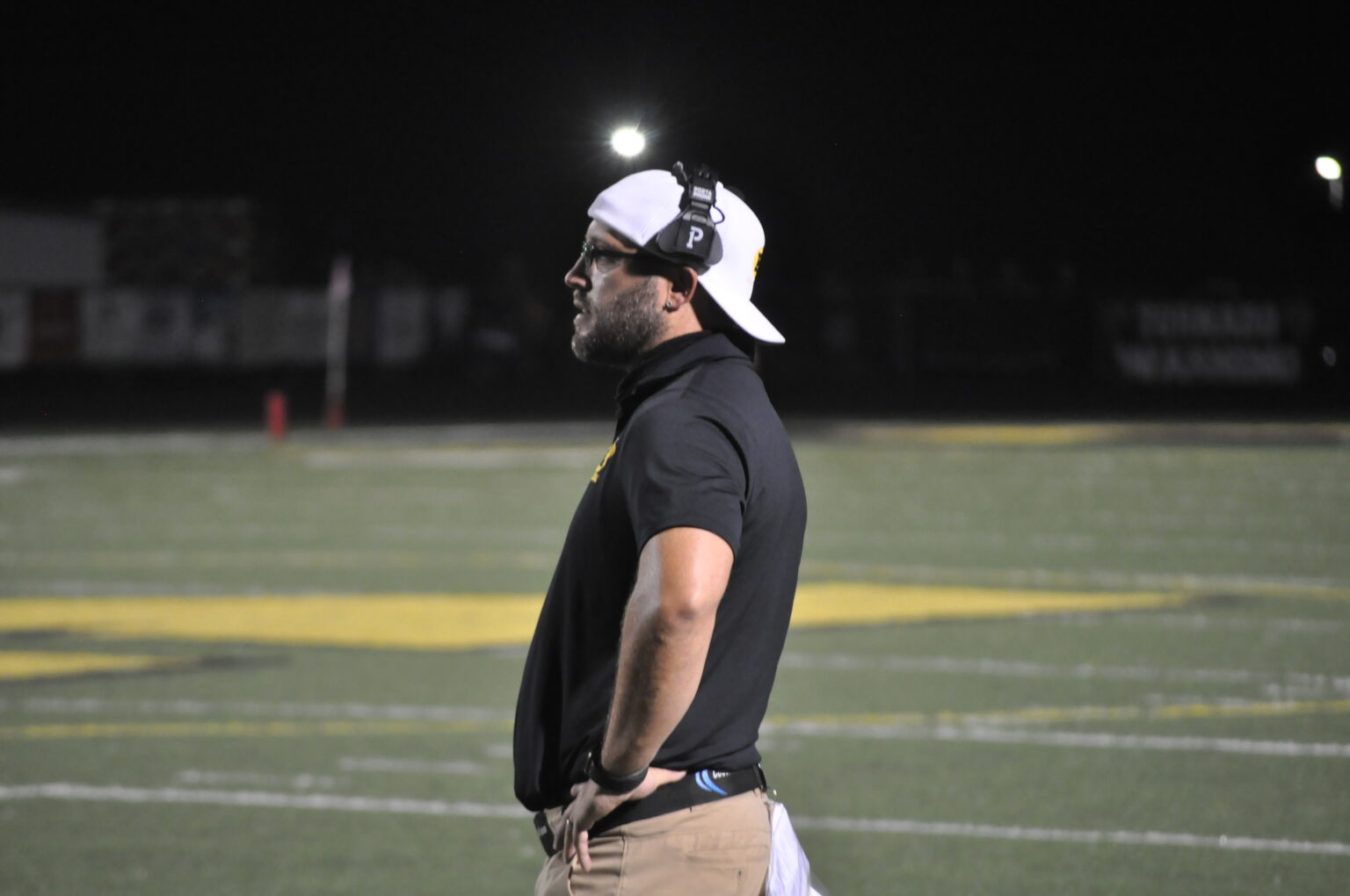 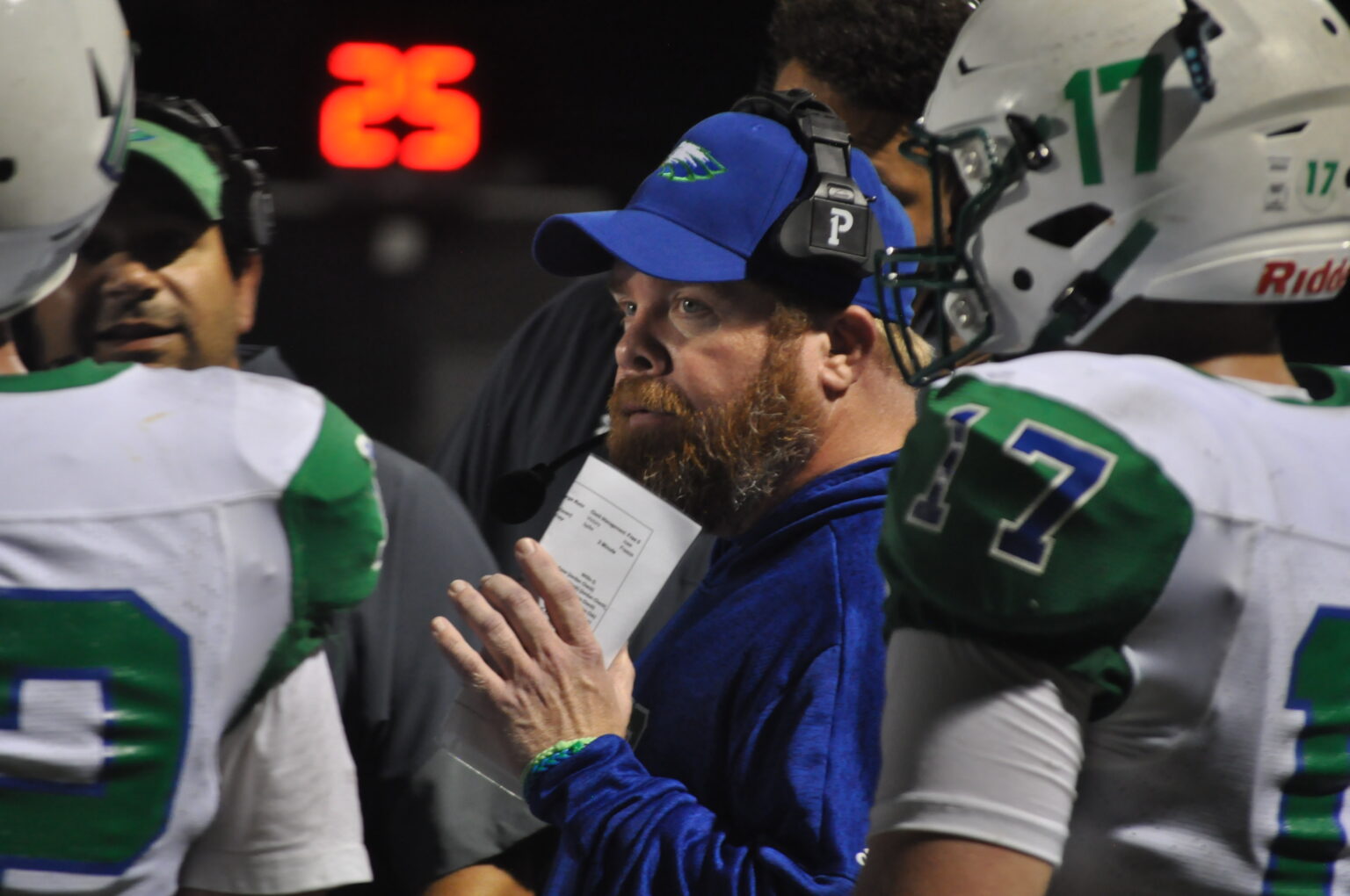 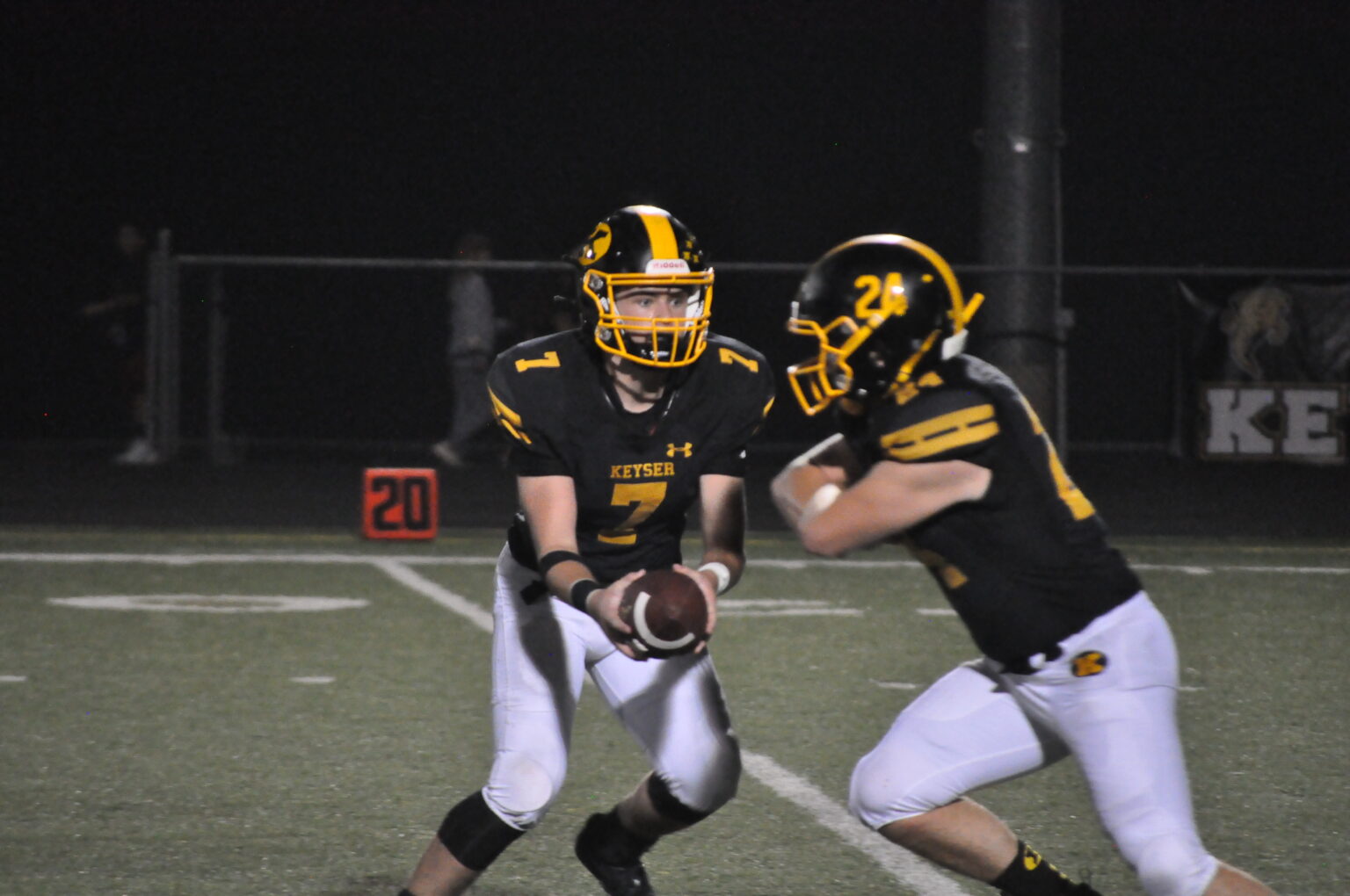 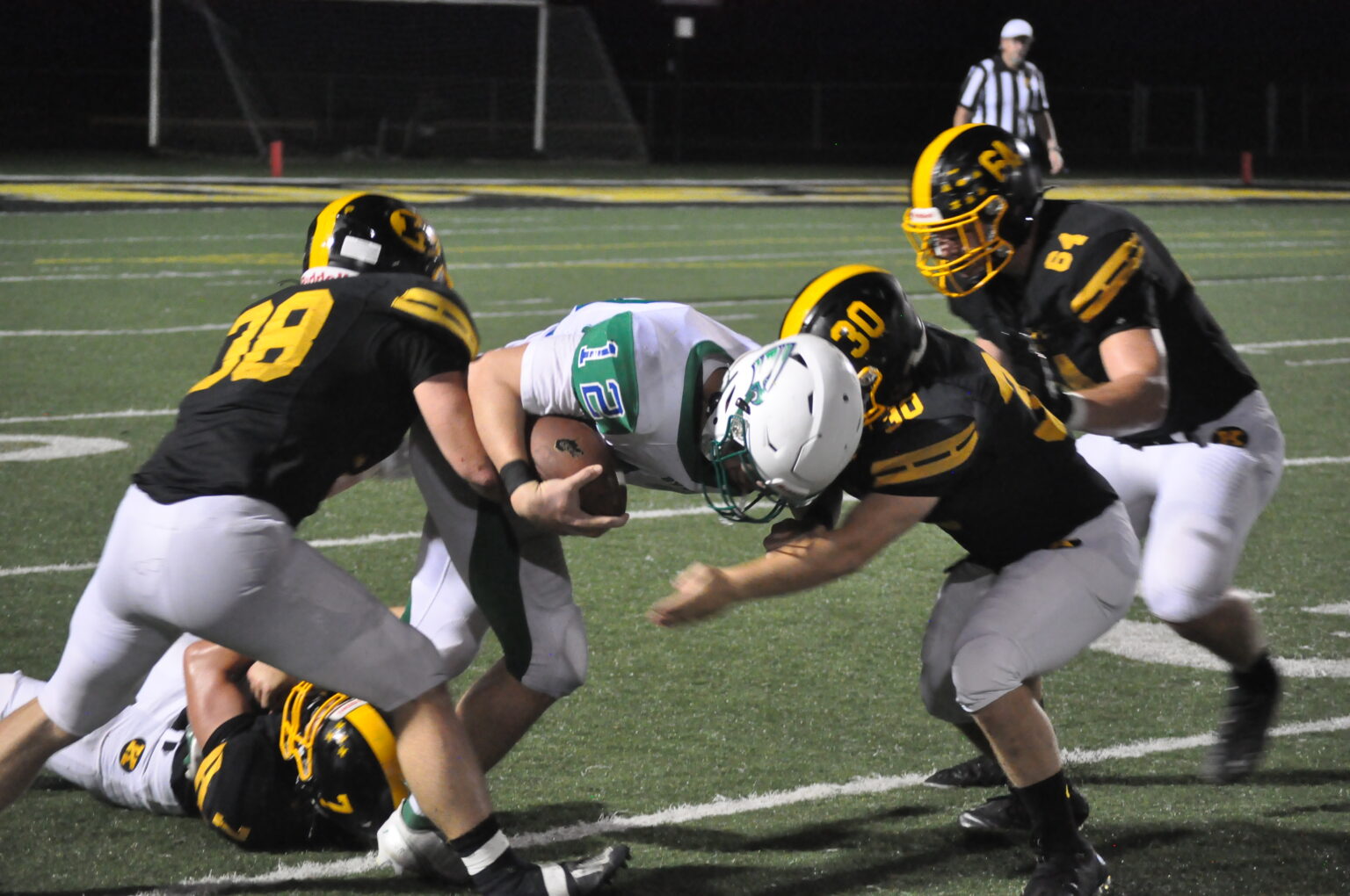 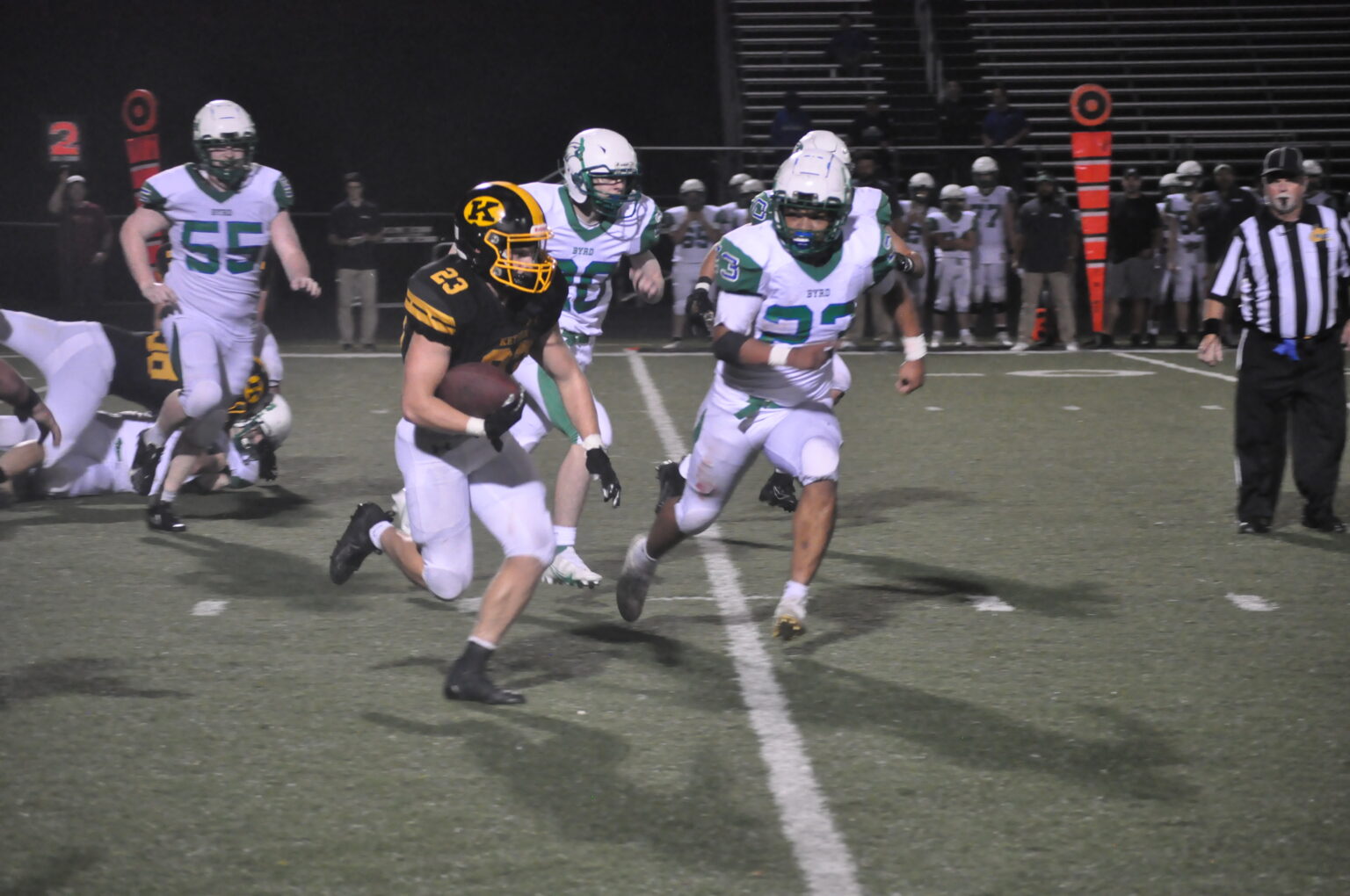 Hunter VanPelt tries to get by Jeremiah King. Photo by Greg Carey/WVMetroNews.com 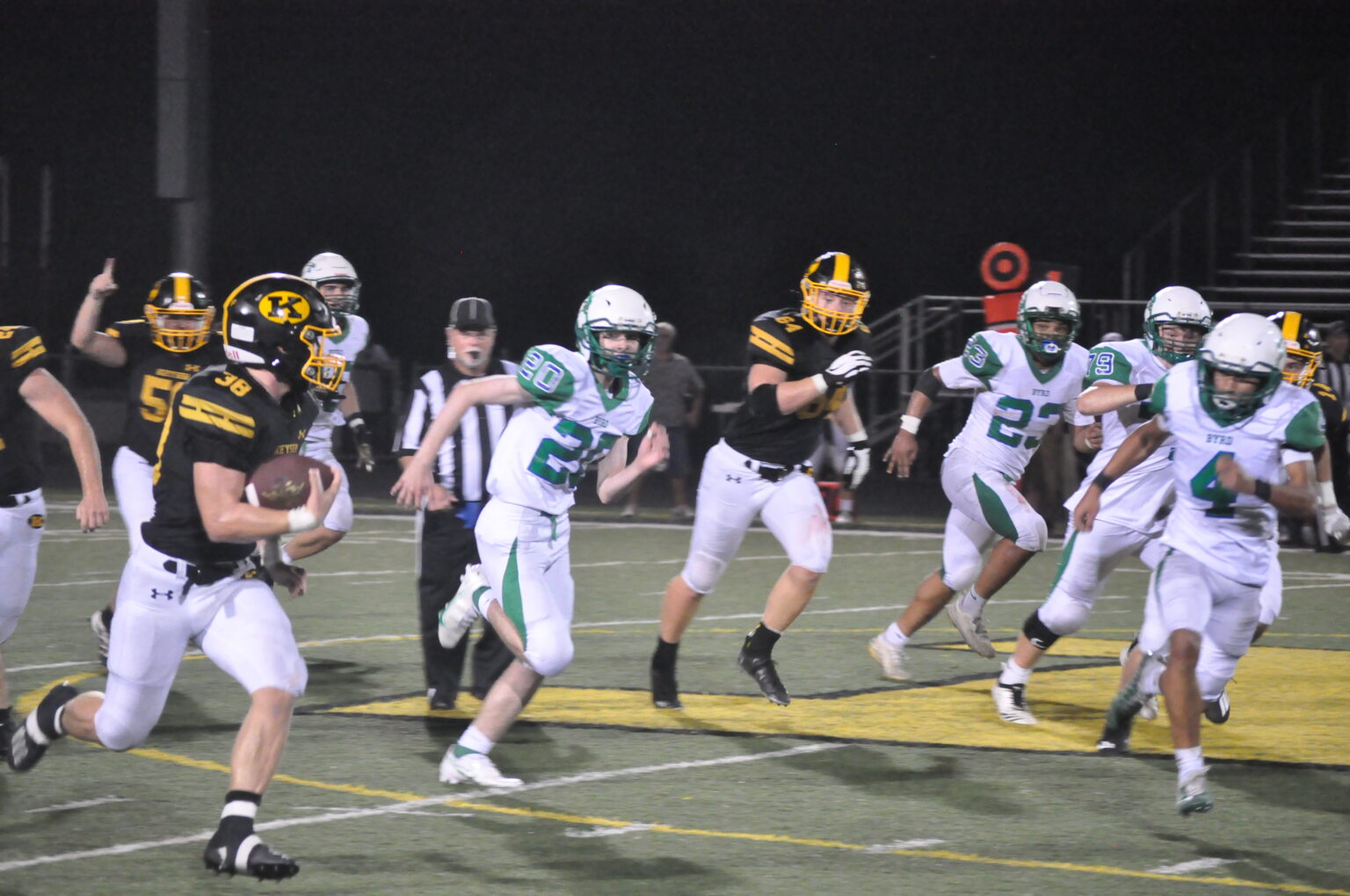 Sam Bradfield finds plenty of room to run on his 67-yard touchdown. Photo by Greg Carey/WVMetroNews.com 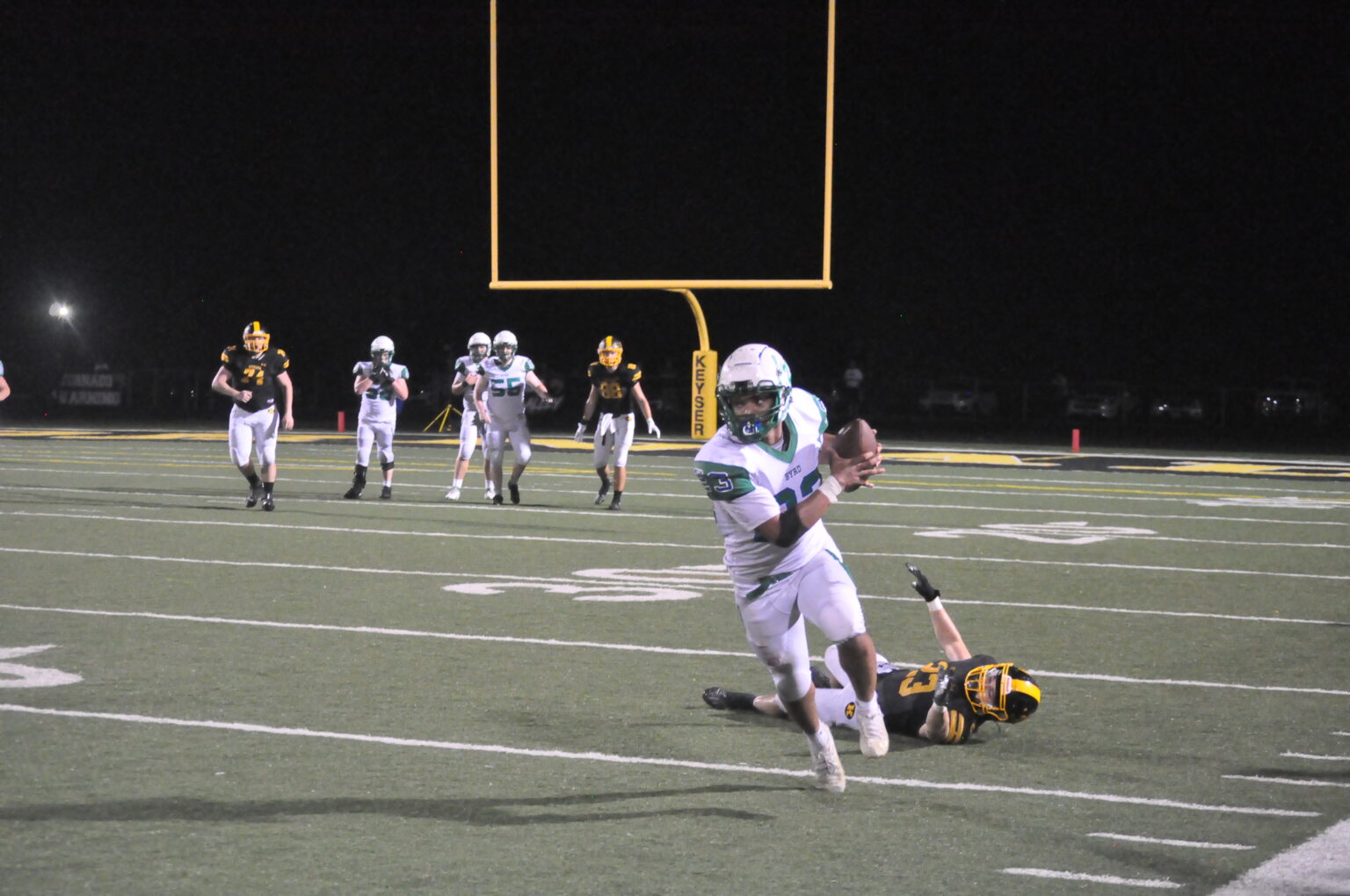 KEYSER, W.Va. — Class AA No. 4 Keyser took it to top-rated Robert C. Byrd, and three rushing touchdowns of at least 50 yards, combined with two passing touchdowns from Seth Healy was enough Friday for the Golden Tornado to roll by the Eagles, 35-13.

The Flying Eagles played the first half without standout Jeremiah King, who has rushed for more than 5,000 yards in his storied high school career. King was dressed, but relegated to the sideline for the first two quarters after missing Thursday’s practice.

His absence helped Keyser (2-0) get out to an early 14-0 lead. After forcing a three-and-out on the game’s opening series, the Golden Tornado went 66 yards in eight plays and reached the end zone on their first passing play — an 18-yard toss from Healy to Seth Sions.

Seth Earnest made his first of five point-after kicks to give KHS a 7-0 lead at the 7:34 mark of the opening quarter.

A second RCB (2-1) three-and-out gave the ball back to Keyser quickly, and the Golden Tornado got a 50-yard touchdown run from Hunter VanPelt on the eighth play of their series to take a 14-0 advantage with 3:12 left in the quarter.

“[King’s absence] shouldn’t have that impact,” RCB coach Josh Gorrell said. “We got physically whooped up front. Those give guys that we rely on up front didn’t do a thing. They got physically punished all night long.”

Caden Youngblood’s recovery of a Nick George fumble late in the opening period took away a potential scoring opportunity for the Eagles after they gained 54 yards on their third series.

But after forcing a pair of punts, RCB cut its deficit in half when George connected with Nathaniel Junkins on an 11-yard touchdown pass 4:23 before halftime.

The Eagles got the ball back with 2:41 left in the half, but were unable to pick up a first down and allowed Keyser to start at midfield with 1:37 remaining.

Healy’s 47-yard pass to VanPelt on a play where he rolled left and threw back across the field to a streaking target put KHS at the RCB 6-yard line.

“We had been doing some things to try to set that play up earlier in the half and we saw an opening,” Stephen said. “I give credit to my wing back. He came over and said, ‘Hey I think this play is open.’ So we set it up, looked and said, ‘It’s there, let’s call it.’ That’s a credit to my players knowing this offense and being able to tell us adjustments that we can do with it.”

“Something was wrong mentally with us tonight,” Gorrell said.

RCB got a fourth down stop in the red zone on the opening possession of the second half, and George found King for a 47-yard touchdown pass on fourth-and-13 to bring the Eagles back to within one score on the first play of the fourth quarter, though the PAT sailed wide.

With the Eagles appearing to have momentum, Keyser answered quickly in the form of Bradfield’s 67-yard touchdown run with 9:52 left.

“We laid down and tucked our tail. Let’s call it what it is,” Gorrell said. “We got whooped. You have to suck it up and play and you have to be physical.”

“Obviously we bought into the No. 1 thing, which surprises me, but OK — now we’re fighting for our playoff lives,” Gorrell said.

While King hauled in the pass to provide his team’s only second-half points, the senior was held to 23 rushing yards on seven carries over the final two quarters.

“We preached all week you have to tackle and get black hats to the football,” Stephen said. “That’s one of the things that kept him in check is we were rallying to the football. He didn’t get those big cutback gains like he’s had in the past games. We had to rally to the football and tackle and that was our mantra, especially on defense.”