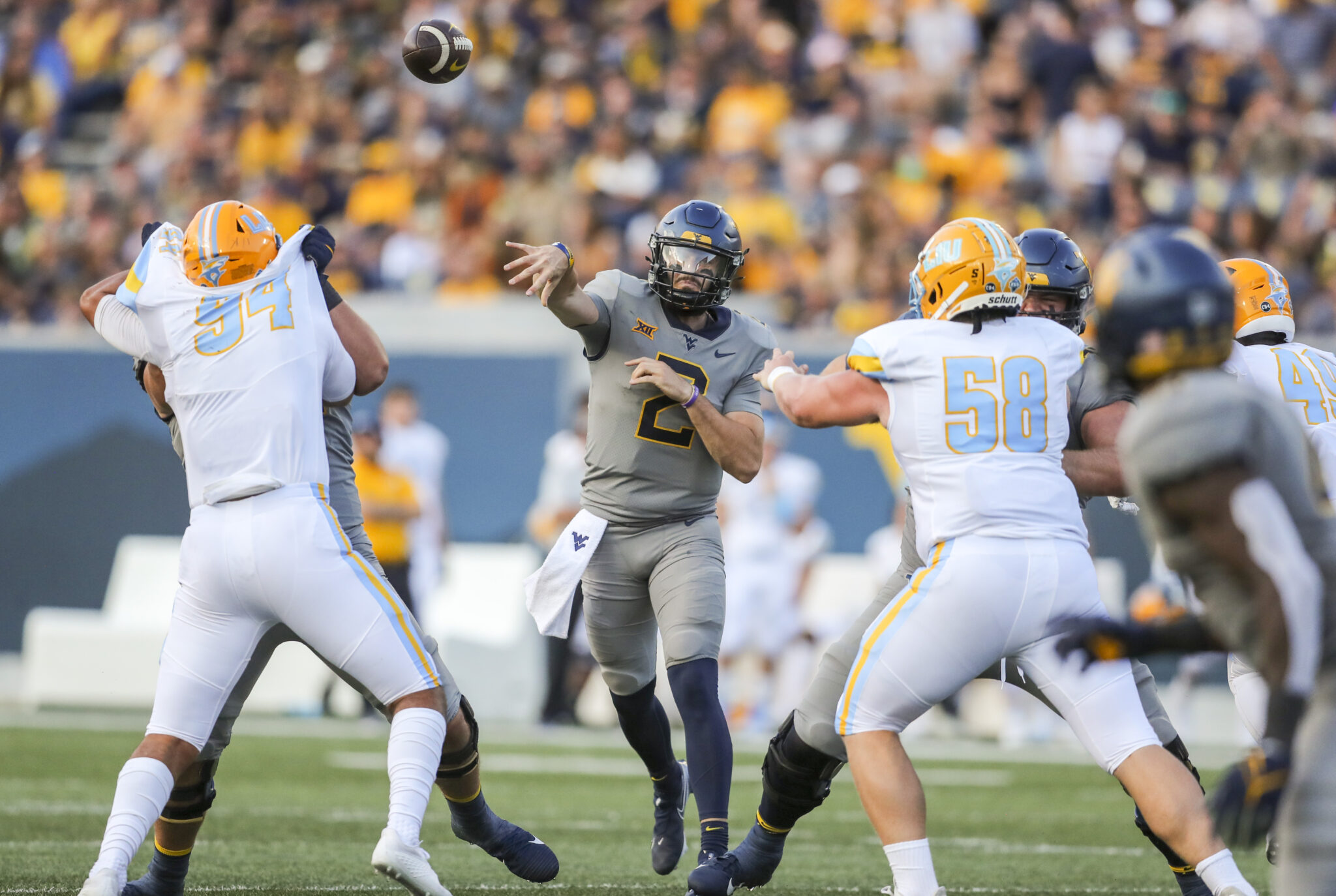 MORGANTOWN, W.Va. — For only the second time since 2005, the Black Diamond Trophy is up for grabs when No. 15 Virginia Tech faces West Virginia at noon Saturday.

The contest at Milan Puskar Stadium will be shown on Fox Sports 1, as the Mountaineers (1-1) hope to climb above the .500 mark for the first time this season.

It will be a tall task against the Hokies (2-0), who have made a strong early impression with a 17-10 win over then-No. 10 North Carolina and last week’s 35-14 victory over Middle Tennessee.

“We’re excited to be home. Going back to 2019 when we played Texas, this is the first time we’re going to be at home in an electric atmosphere,” West Virginia head coach Neal Brown said. “Our guys are really looking forward to it.”

The Mountaineers lead the all-time series 28-23-1 and have a 16-9 mark in games played in Morgantown.

But the teams haven’t met at this venue since 2005, which marked the second of a current three-game win steak for Virginia Tech in the series. The most recent meeting came in 2017, when the Hokies won 31-24 at FedEx Field in Landover, Maryland. That was the second season for Hokies’ head coach Justin Fuente, while this marks the first time Brown has opposed Virginia Tech.

“I haven’t taken part in this rivalry yet,” Brown said. “For our fan base, especially the fans that have been attending games here and been a fan for a while, this rivalry means something. Bordering states, but it was dormant for a while and Virginia Tech has won seven of the last ten and the last three. They’ve had the upper hand in recent years.”

A primary focus for West Virginia in last week’s 66-0 victory over FCS member Long Island was to cut back on mistakes and display better fundamentals. For the most part, that was accomplished, albeit against an inferior opponent.

Redshirt freshman quarterback Garrett Greene saw the first extended action of his career against the Sharks, though senior Jarret Doege remains the starter.

Doege has completed 38-of-62 passes for 536 yards with four touchdowns and two interceptions.

“You can just tell he has a really good understanding of what they’re trying to get accomplished,” Fuente said. “They have guys on the outside that can go make plays. They’re a good screen team. He gets the ball out of his hands and they’ve made plenty of plays in the passing game. It’s a dangerous, dynamic group that can put points on the board in a hurry.”

Greene, who provides a change of pace behind center, could see spot action as the season progresses. Against Long Island, he rushed 14 times for 98 yards and two touchdowns and completed 4-of-7 passes for 57 yards.

“With him, it’s going to be a mixture. You don’t want to contain his best ability, which is his ability to freelance and make plays on the run,” Brown said. “We’re working on finding a happy medium.”

The Mountaineers have stressed the need to play more physical in an effort to find success against a defense that ranks 18th in fewest points allowed.

That starts with improvement on the ground after featured tailback Leddie Brown was limited to 15 carries for 31 yards last week. While Brown has four rushing touchdowns and five total TDs, he has been limited to 104 rushing yards on 32 attempts through two games.

“You want to be physical, but it has to have purpose,” WVU offensive coordinator Gerad Parker said. “What I mean is there’s a lot of things that go into playing well and playing hard. That’s not only playing physical, but it’s playing with great pad level and trusting your footwork and fundamentals. Those are the things we have to do and we have to do it with purpose.

“We’re in a good place of owning that process. They know what this game is and they know we have to take steps each week to play winning football.”

James has eight receptions for 120 yards and a team-best two receiving scores.

Wright has nine grabs for 101 yards, but his biggest impact has come on special teams. He set a single-game program record with 217 kickoff return yards against the Terrapins, and the elusive junior returned the opening kickoff 90 yards for a TD against the Sharks. Wright is averaging better than 51 yards on six returns.

Should he have the opportunity to return kicks Saturday, Wright will face a stern test against what’s annually one of the top kickoff coverage and special teams units in college football.

“A byproduct of tackling really good skill players is being in the right position and eliminating some of that space the best that you can,” Fuente said. “Then there’s some obvious technique involved in that. We’ve made improvement. It’s something we work on every single week, even during the season.”

A West Virginia defense coming off its first shutout in Brown’s tenure and its first in six seasons will look to slow a run-oriented Hokies’ offense.

Quarterback Braxton Burmeister is a dual threat and leads the team with 94 rushing yards. Tailbacks Jalen Holston and Raheem Blackshear have combined for 149 rushing yards and three touchdowns, while QB Connor Blumrick rushed for 38 yards and a touchdown on three carries against the Blue Raiders.

“Anytime you lose a player of that caliber, I’d think it would hurt you, but they do have depth at that position,” Neal Brown said.

The Tech defense has 18 tackles for loss and nine sacks to go with four interceptions, half of which have been recorded by junior cornerback Jermaine Waller.

“Waller may be playing as good as any corner in the country right now,” Neal Brown said.

The Mountaineers seek a seventh straight win at home dating back to the start of last season in their final non-conference game of the regular season.

“It’s a sellout crowd and we’re excited about it,” Neal Brown said. “It’s going to be a tremendous atmosphere.”

WVU Sports
Follow along: Mountaineers look to make most of open week in matchup with TCU
West Virginia takes on the Horned Frogs in its first game in two weeks.
By Greg Carey
WVU Sports
Setting the scene from Fort Worth as WVU preps for TCU
MetroNews Gameday coverage is underway and runs through midnight this evening.
By Joe Brocato
WVU Sports
West Virginia out to snap three-game skid, earn first road win since 2019 at TCU
The Mountaineers return to the sight of their most recent road triumph in search of their first victory in Big 12 play.
By Greg Carey
WVU Sports
WVU wrestlers set for full season after COVID-shortened 2021 schedule
NCAA Tournament participant Noah Adams did not return to the program this year.
By Joe Brocato
View AllHoppy's Commentary