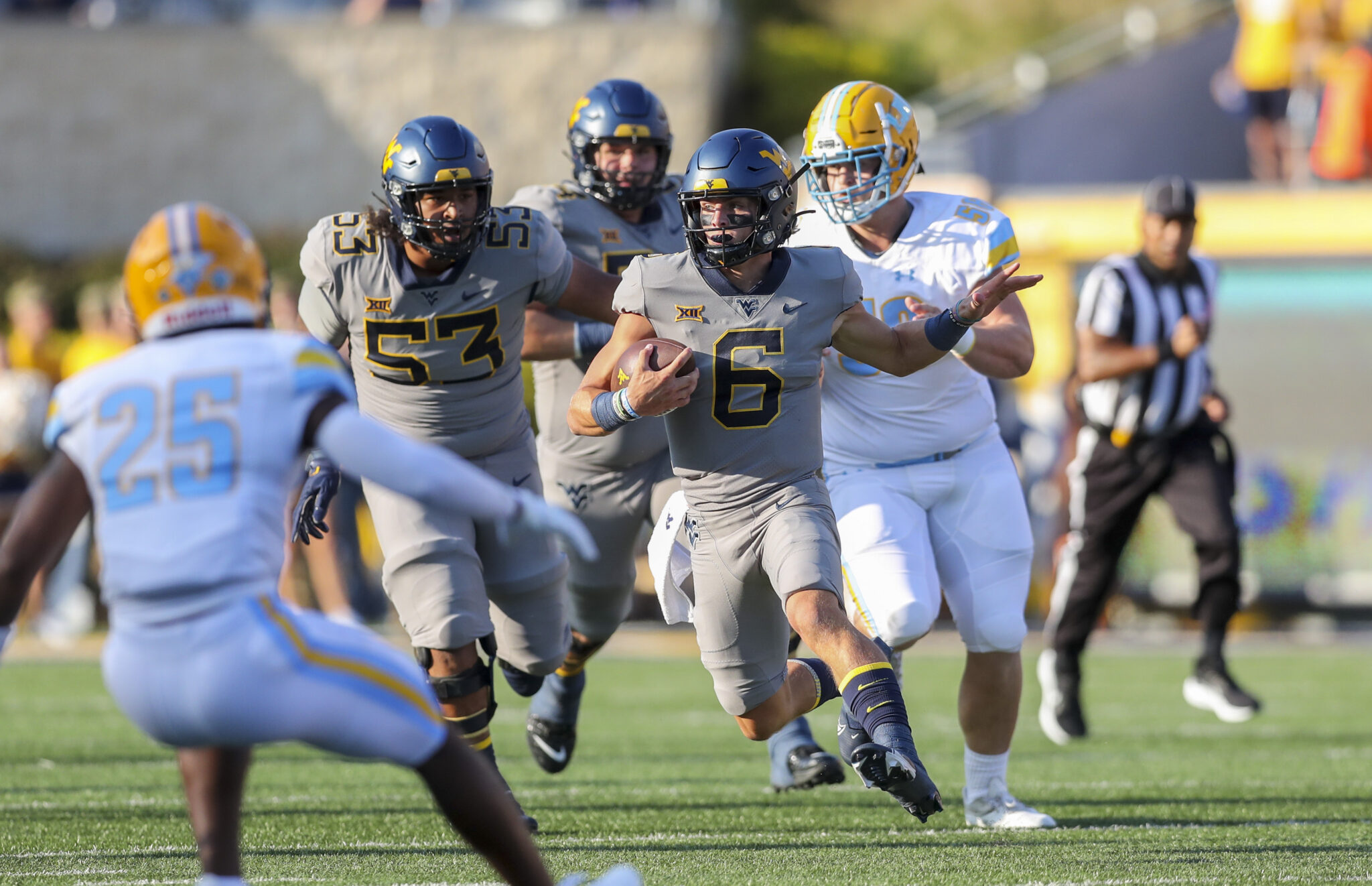 Yet as the Mountaineers brace for Saturday’s Big 12 Conference opener at No. 4 Oklahoma, it’s apparent head coach Neal Brown has a plan in place that continues allowing Garrett Greene to spell Doege at times.

“We’ll continue to play both and continue to have plans for both,” Brown said. “The good thing, too, for those guys is they’re really close and they get along, and they’ve been good for each other in the room.”

Greene’s only pass was incomplete, while the redshirt freshman rushed four times for 28 yards and two first downs.

That followed Greene’s Week 2 performance against Football Championship Subdivision member Long Island in which he was 4-of-7 for 57 yards through the air and rushed 14 times for 98 yards and two touchdowns.

While one of Greene’s best assets is his mobility and ability to improvise and make plays on the run, Doege is more of a natural pocket passer who will rarely hurt opponents with his legs.

“There’s very little crossover with these two and that’s good and bad,” Brown said. “It’s probably more difficult for the defenses, but there’s some challenges when you’re putting together a game plan. It’s really important that you keep everything for the offensive line the same, because that’s the most important piece.

“Plus, we’ve had some issues up there that we did a much better job in the run game. We had some protection at tackle a little bit, but we protected pretty well against two really good defensive ends against Virginia Tech. But you can’t ask them to do a bunch of different things schematically. It’s not fair to them because you don’t have enough time to rep it.”

In the win over the Hokies, Doege had two fourth-quarter turnovers — the first a fumble in which he was poorly protected and the other a late-game interception that put VT in position to take its first lead in the game’s final minute, before West Virginia’s third stand in the red zone.

Prior to the interception, Greene rushed for 5 yards on second-and-10, and he was set to take the next snap before a pre-snap penalty turned third-and-manageable into third-and-long.

“We have a play for Garrett on the pull and get a false start,” Brown said.

When the third down distance doubled,  Brown opted to pass in an effort to seal the win, but Doege’s throw on a receiver screen was picked off by Jermaine Waller.

Greene did not play in the season-opening loss at Maryland and his only previous action in a road game came last season in a lopsided loss at Iowa State when he rushed once for 7 yards.

However, by playing Greene each of the last two weeks, the Mountaineers have at the very least forced the Sooners to account for him in their game plan ahead of Saturday’s matchup.

While the 195-pound native of Tallahassee, Florida is WVU’s second-leading rusher with 126 yards, Brown believes the Mountaineers will have to do a better job of keep defenses honest as Greene continues to build experience.

“That’s where the challenge comes in,” Brown said. “How much can you do? How can we present differently to the defense with each quarterback? How you rotate them within a game, there’s a feel to it.

“With Garrett, I don’t know if I have a total feel for him in games yet. He did some really good things on Saturday. There’s a couple that weren’t so good. But he ran the ball well. He can throw it. We haven’t asked him to do it as much, but he can. He has a really strong arm. There’s a science to it. We don’t have it completely figured it out yet, but we’re working through it.“

Sports
Strong second half lifts Moorefield to 25-24 win over East Hardy
The Yellow Jackets have won six consecutive games.
By Joe Brocato
Sports
Eakle has East Fairmont on the rise in third season leading the Bees
The Bees are seeking their fourth playoff appearance in 101 years.
By Joe Brocato
Sports
Marshall at North Texas: What to watch for
The Thundering Herd take on the Mean Green in a nationally televised Conference USA matchup.
By MetroNews
Sports
Sean McNeil ready to showcase expanded game in guard-heavy lineup
McNeil elected to return for his senior season after entering the NBA Draft process in the spring.
By Joe Brocato
View AllHoppy's Commentary