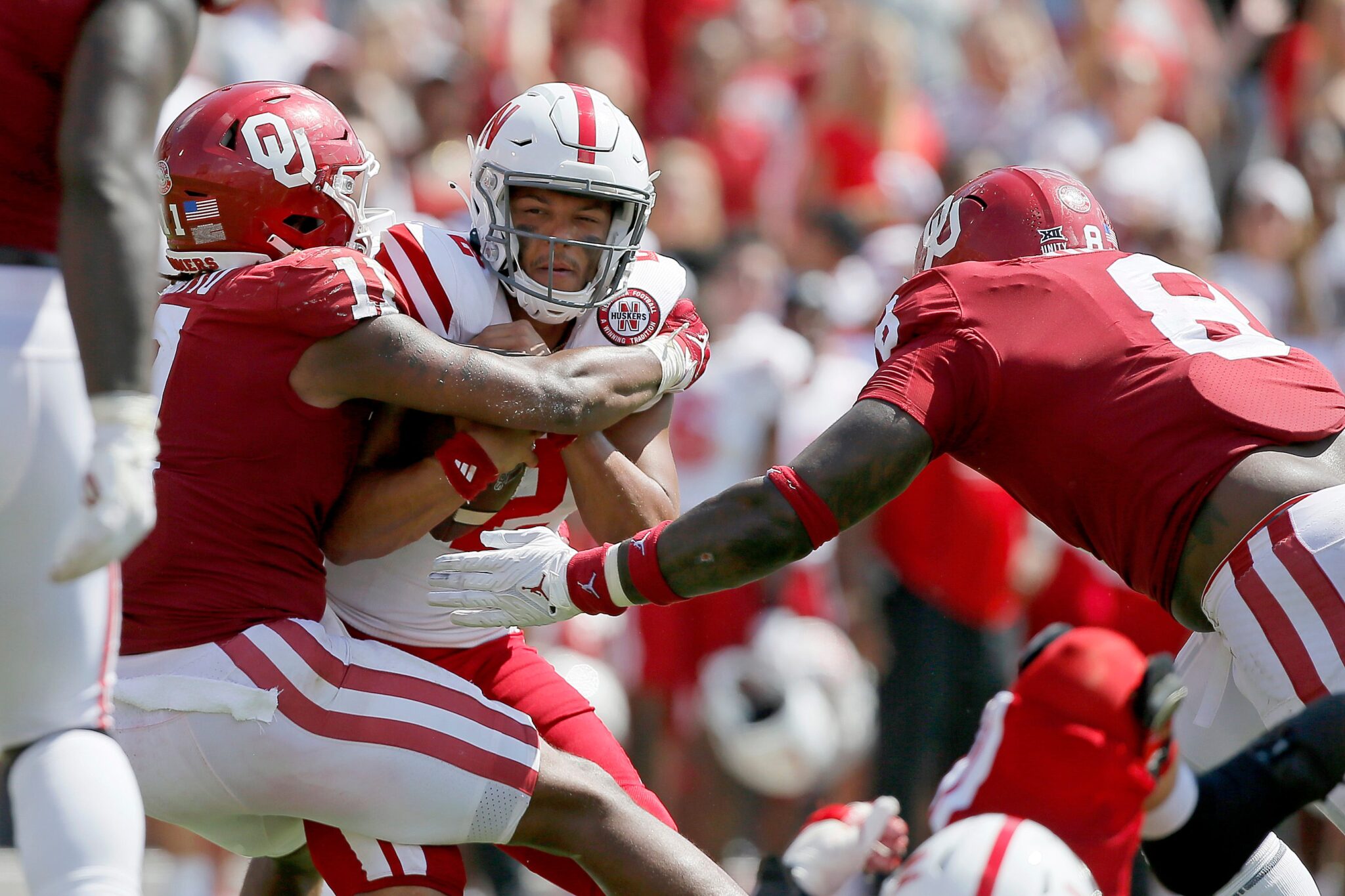 Oklahoma's Nik Bonitto (11) and Perrion Winfrey (8) bring down Nebraska's Adrian Martinez (2) during the Sooners' 23-16 win Saturday in Norman. Photo by The Oklahoman

MORGANTOWN, W.Va. — Oklahoma has long had one of college football’s most feared offenses.

For proof, look no further than the Sooners’ seven Heisman Trophy winners, a list that includes four OU quarterbacks since 2003.

Since joining the Big 12 Conference, West Virginia has lost all eight matchups with Oklahoma, which has 381 points over that stretch. OU has at least 44 points in seven of the eight meetings and 50-plus in five, including each of the last four.

There’s no question a tough challenge awaits the WVU defense Saturday, but the offense will also have its work cut out in search of its best performance this season against a quality OU defense.

“They do a great job recruiting personnel,” West Virginia head coach Neal Brown said. “They’re disruptive up front in all ways you can be disruptive — pass rush and run stunts, the movement they put together. Their back end guys are talented, gifted and can run.“

The Sooners have strong national rankings in several important defensive categories, including No. 31 in scoring by allowing 17 points per game, 13th in turnovers forced (7), 12th in tackles for loss (25) and sixth in sacks (13).

After season-opening struggles in a 40-35 win over Tulane, Oklahoma’s defense has shown improvement. The Sooners blanked Western Carolina and last week limited Nebraska to 16 points, allowing OU to knock off a rival despite its lowest point total over the last six seasons.

“They play really, really hard,” Brown said. “I’ve said it before — what better compliment can you give a group that’s well wired up and sound in what they do by scheme? It’s is a compliment to their coaching staff and how hard they play.”

The Sooners rank 46th allowing slightly more than 319 yards per game, though the Green Wave and Cornhuskers both gained close to 400 yards. Even when opposing teams have moved the ball well against OU, they’ve struggled to protect it. Tulane’s three turnovers were costly, while a one-handed interception from D.J. Graham helped the Sooners hold off Nebraska.

It’s a trend that’s carried over from last season, when OU forced 19 turnovers and was third in college football with 16 interceptions.

West Virginia, meanwhile, has struggled with turnovers and its seven to this point are more than all but six Football Bowl Subdivision teams.

“Turnovers has kind of been our Achilles’ heel this year,” Brown said. “We’re minus-six in turnover margin on the year. Haven’t done a very good job defensively taking it away, and then offensively, we have to do a better job. It’s hard to overcome and we just barely did on Saturday.”

The Sooners pride themselves on pressuring quarterbacks to help create those turnovers. Their 39 sacks last season were more than every team outside of Clemson and Pittsburgh.

Already this season, seven OU players have at least one sack, led by 2.5 apiece from defensive linemen Isaiah Thomas and Perrion Winfrey and outside linebacker Nik Bonitto.

“He’s done a really good job of stabilizing that side of the ball,” Brown said. “They’re playing at a high level. Schematically, he gives you some issues. “There’s a lot of similarities how they operate their front six and how we operate our front six.

“Their defensive linemen are difference makers across the board. Winfrey plays inside, you look at Thomas and Bonitto, they’re all high-round NFL draft picks and we’re going to have to really compete hard on the interior part of our offensive line and at tackle.”

WVU will be out to duplicate the rushing success it had last week in a 27-21 over Virginia Tech when Leddie Brown took his first carry for an 80-yard touchdown en route to a season-high 161-yard performance.

But the Mountaineers have struggled offensively after halftime and against Maryland and the Hokies, they failed to score a second-half touchdown and combined for six points.

“We know we have a job to do to keep ourselves in the game to where we find a way to score one more than them,” WVU offensive coordinator Gerad Parker said. “It’s a huge deal and a great challenge for us as a football team. Statistics are proof of future and past outcomes, but at the same time, what do we have to do to put ourselves in the best position to be in this game and find a way to finish it in the fourth? That’s been our biggest push in game planning.”