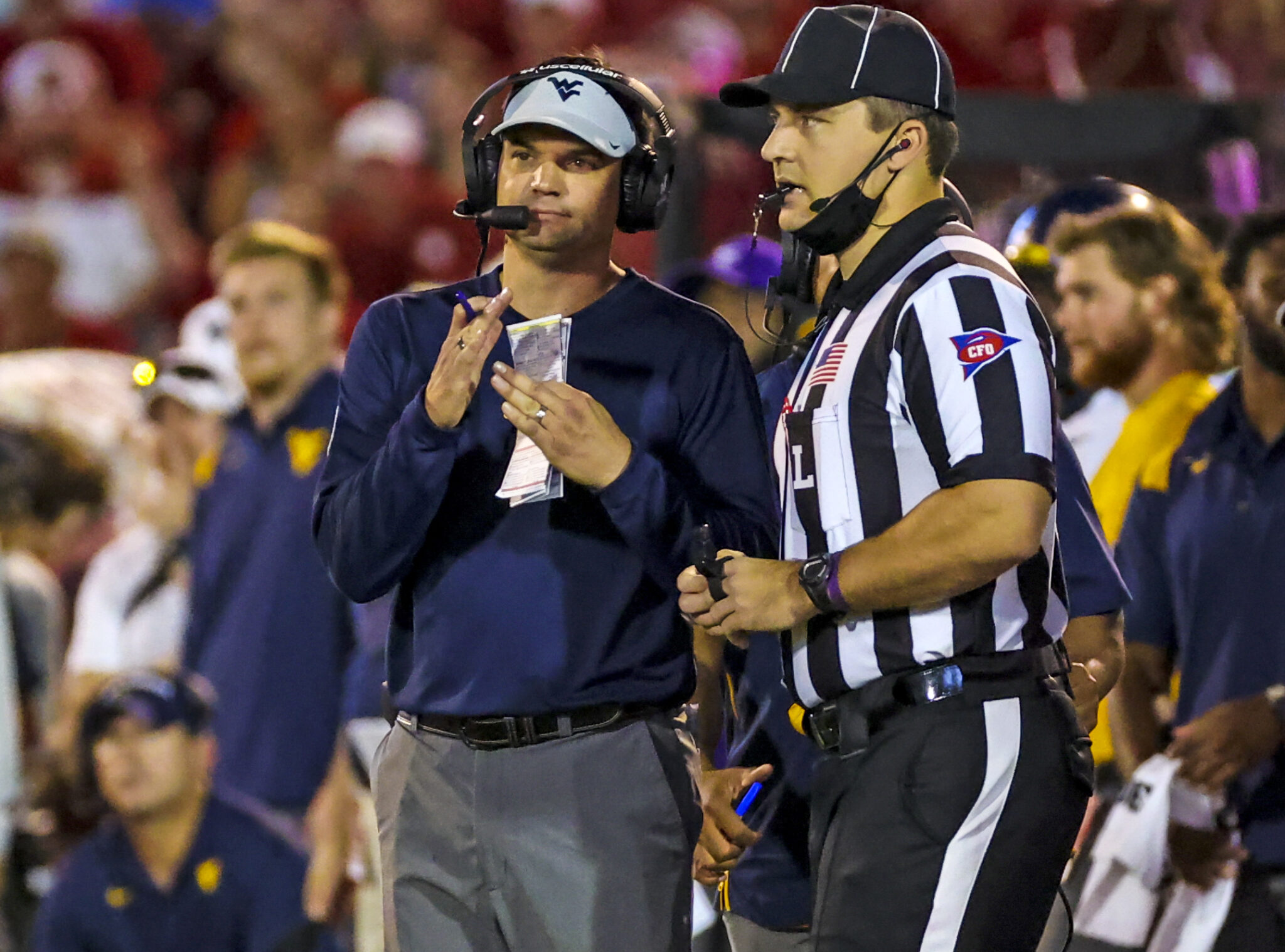 Mountaineers have now lost six straight road games dating back to the start of the 2020 season. WVU remains without a second-half touchdown this season against three Power 5 opponents and has managed nine points over those 12 quarters.

10:48 p.m. — Oklahoma has picked up four first downs and moved to the WVU 30 on what could be the game’s decisive drive. The Mountaineers just called their first timeout with 1:01 left and OU facing second-and-6 from the WVU 30.

10:36 p.m. — The Mountaineers were in position to take a late lead, but a false start penalty was followed by a shotgun snap that Doege wasn’t ready to handle, resulting in a 21-yard loss that moved the ball from the Oklahoma 33 to WVU’s 46. Sumpter punts 46 yards and the Sooners start on their 7 with 3:39 left.

10:25 p.m. — Brkic makes a 35-yard field goal to tie the game at 13. Oklahoma moved itself out of the red zone with a Marquis Hayes holding penalty, and Dante Stills’ sack of Rattler put the Sooners in long distance situations on second and third down, before the tying kick. Now would be a good time for the Mountaineers’ first second-half touchdown this season, excluding the Week 2 win over Long Island. WEST VIRGINIA 13, OKLAHOMA 13, 8:52 4th qtr

10:02 p.m. — WVU goes three-and-out and Sumpter’s punt goes into the end zone for a touchback.

9:57 p.m. — Kennedy Brooks is stopped on fourth-and-1 at midfield and WVU takes over there. Mesidor blew up the fourth-down try and continues his strong play up front. However, Doege is flagged for intentional grounding on the first play of the ensuing series. Mountaineers still lead by three late in the third quarter.

9:50 p.m. — WVU regains the lead on Legg’s 21-yard field goal, but it’s a win for the Sooners’ defense. The Mountaineers had second-and-goal on the 1, before a false start on Parker Moorer moved them back. On third-and-goal from the 4, Doege couldn’t connect with an open Ford-Wheaton in the end zone. The Mountaineers had several creative play calls on the drive, which went 68 yards in 11 plays. WEST VIRGINIA 13, Oklahoma 10, 5:21 3rd qtr

9:33 p.m. — The Mountaineers continue their strong defensive play in the red zone and hold the Sooners to a field goal after they had first-and-goal at the 6. OU kicker Gabe Brkic knocks it through from 28 yards to tie the game at 10. Rattler’s 35-yard pass to Mike Wright was the key play of the 64-yard drive. WEST VIRGINIA 10, OKLAHOMA 10, 11:26 3rd qtr

30 more minutes (or however long it takes)

9:05 p.m. — Casey Legg makes a 25-yard field goal on the final play of the half to send West Virginia into the break with a 10-7 lead over Oklahoma. Legg is now 5-for-5 on field goals this season. On the Sooners’ final possession of the half, Taijh Alston sacked Rattler on third down, helping the Mountaineers start at the OU 49. Doege gained 2 yards on a fourth-and-1 sneak, before throwing a 28-yard pass to Winston Wright Jr. that put WVU in the red zone. This was all accomplished without a timeout available on the drive as the Mountaineers had used all three earlier in the half, including two on their previous possession.  HALFTIME — WEST VIRGINIA 10, Oklahoma 7

8:55 p.m. — West Virginia manages just one first down and 17 yards after the turnover. The Mountaineers have sputtered offensively since its opening drive. Sumpter gets off another good punt, this one 44 yards forcing OU to start at its 7. Sumpter is averaging 47 yards on three punts.

8:45 p.m. — Jackie Matthews intercepts Rattler for WVU’s first pick this season. Daryl Porter Jr. nearly made the interception and got his hands on the ball, before Matthews dove near the sideline and made a highlight-worthy grab. WVU takes over at its 32-yard line in a 7-all game 5:48 before halftime. Feels like an important drive for the Mountaineers, who forced their second turnover in the season’s 14th quarter. An audible chant of ‘We want Caleb’ can be heard from the OU faithful following Rattler’s INT. That’s in reference to 5-star true freshman Caleb Williams, who is Rattler’s backup.

What a time for your first career interception! #HailWV pic.twitter.com/d9bge70PuS

8:39 p.m. — Rattler comes up short on a third-and-10 run that gains 8 yards and Oklahoma is forced to punt. The Mountaineers take over at their 15. OU punter Michael Turk has punted twice for 52 and 53 yards, respectively.

8:33 p.m. — West Virginia’s defense holds following the game’s first turnover. Starting from their own 9-yard line, the Mountaineers pick up one first down before punting for the first time. Tyler Sumpter gets off a strong kick that goes 48 yards. The Sooners start at their 24 with 10:24 to play in the first half.

8:22 p.m. — Doege is intercepted by Delarrin Turner-Yell on the third-and-long, and OU takes over at its own 24. The interception is Doege’s fourth this season, but the Mountaineers would’ve been forced to punt anyhow had the pass fallen incomplete. WVU is now minus-7 in turnover margin this season.

8:17 p.m. — The first quarter ends with West Virginia and Oklahoma tied at 7. The Mountaineers’ worst offensive play of the quarter was their final one — a pass from Doege to Leddie Brown that lost 6 yards and sets up a third-and-14 to start the second quarter.

8:10 p.m. — The Sooners answer quickly and get even. Spencer Rattler throws a 4-yard touchdown pass to Austin Stogner on third-and-goal. OU converted on fourth-and-4 from the WVU 47-yard line and needed to cover only 52 yards on the drive after Jared Bartlett was flagged for a personal foul on the kickoff. WEST VIRGINIA 7, OKLAHOMA 7, 2:46 1st qtr

8:02 p.m. — Garrett Greene keeps it for a 2-yard touchdown run and West Virginia drives 75 yards in 17 plays on the game’s opening drive. WVU took off 9:07 of the first-quarter clock. The drive featured a 6-yard pass from Jarret Doege to Bryce Ford-Wheaton on fourth-and-4 from the Sooners’ 38. WEST VIRGINIA 7, Oklahoma 0, 5:53 1st qtr

West Virginia takes the early lead at No. 4 Oklahoma 😤 pic.twitter.com/xb3JGTJD4q

7:10 p.m. — West Virginia (2-1) begins the Big 12 Conference portion of its schedule Saturday night at No. 4 Oklahoma. Kickoff at Gaylord Family Oklahoma Memorial Stadium is set for 7:30 p.m., and the contest will air nationally on ABC.

The Sooners (3-0) have won eight straight against the Mountaineers since WVU joined the Big 12 before the 2012 season. The two teams did not play last season due to COVID-19 issues within West Virginia’s program. In Neal Brown’s only previous matchup against OU, the Sooners won 52-14 in 2019.

Setting the scene from Norman