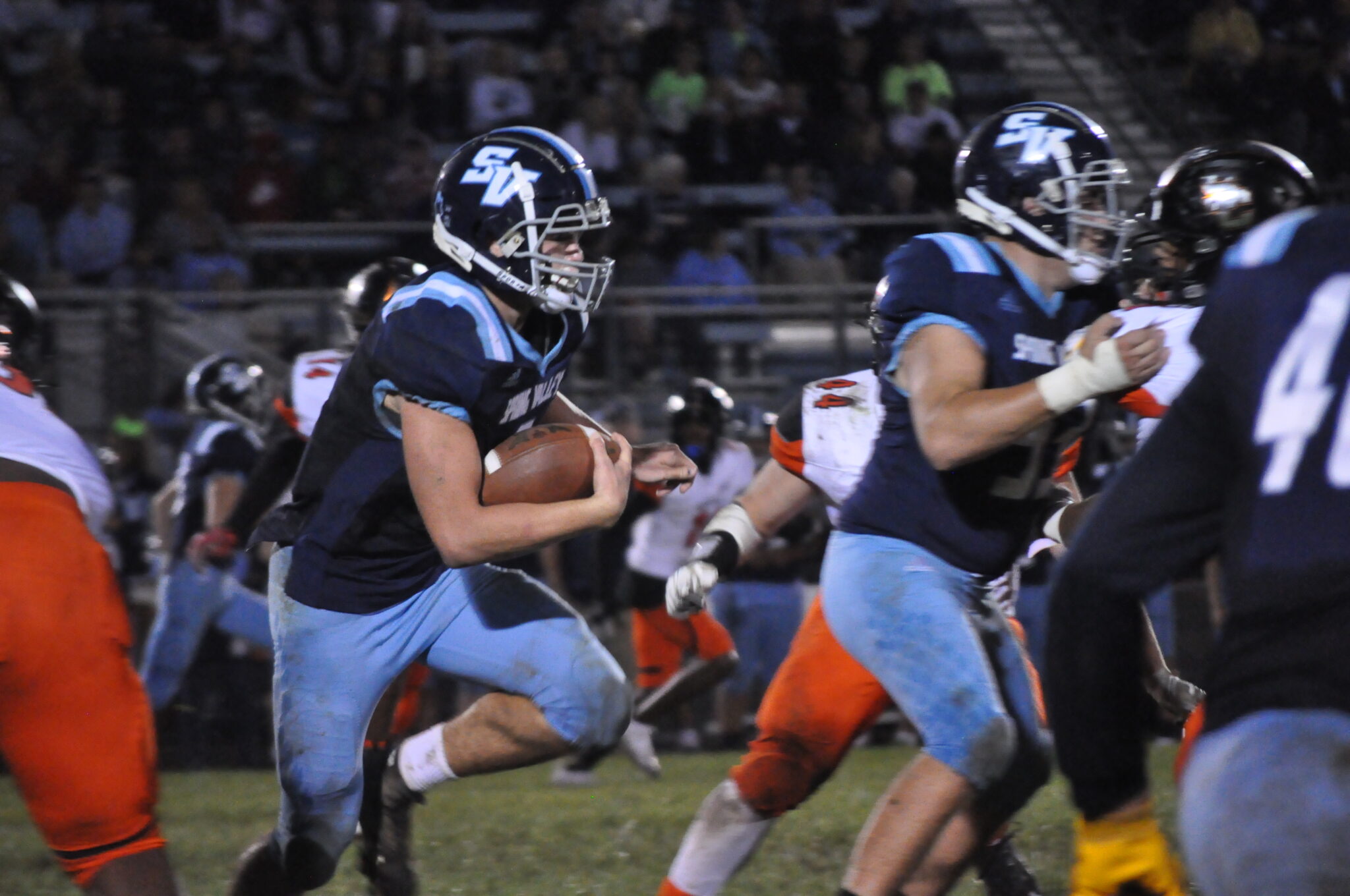 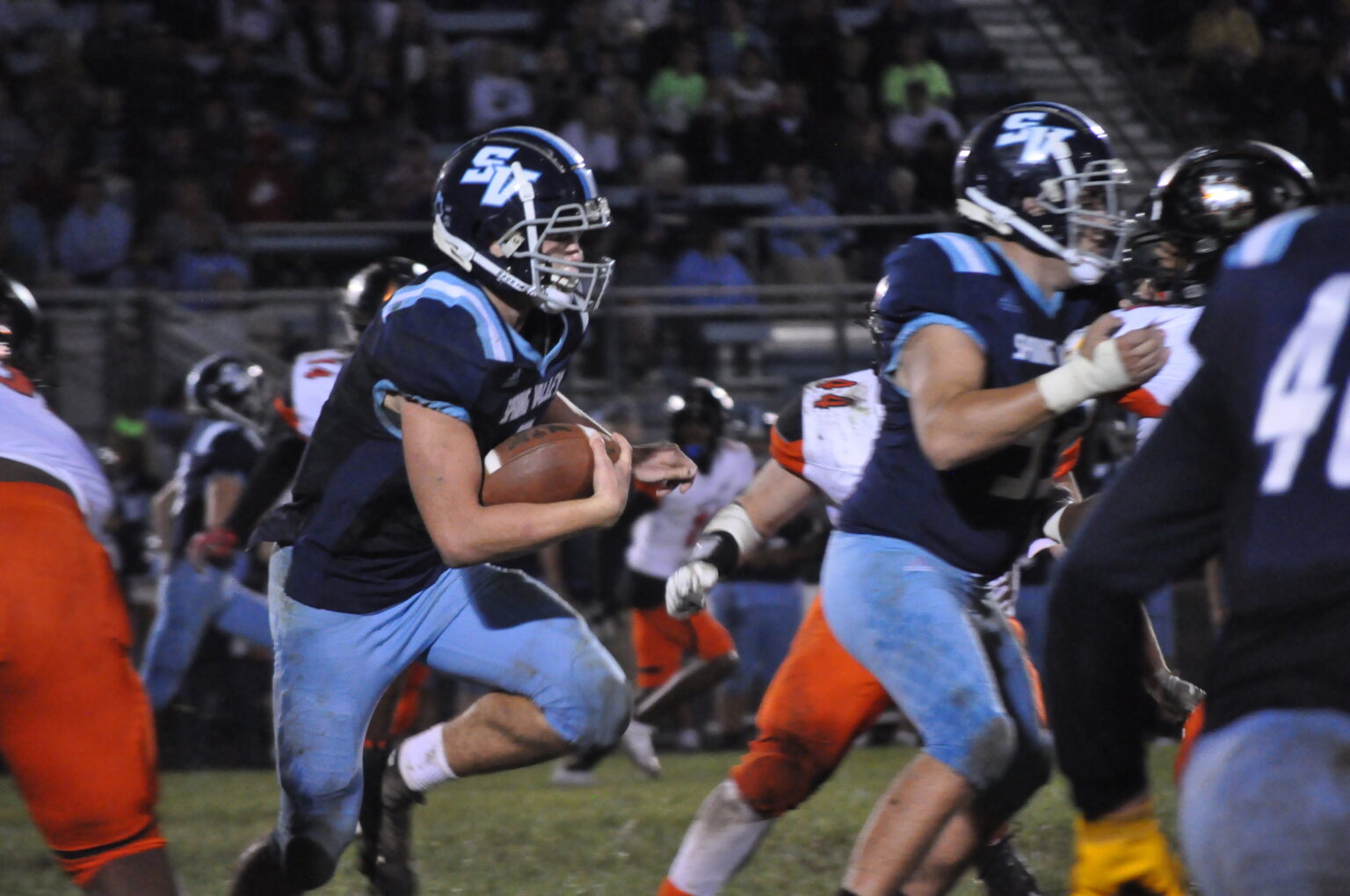 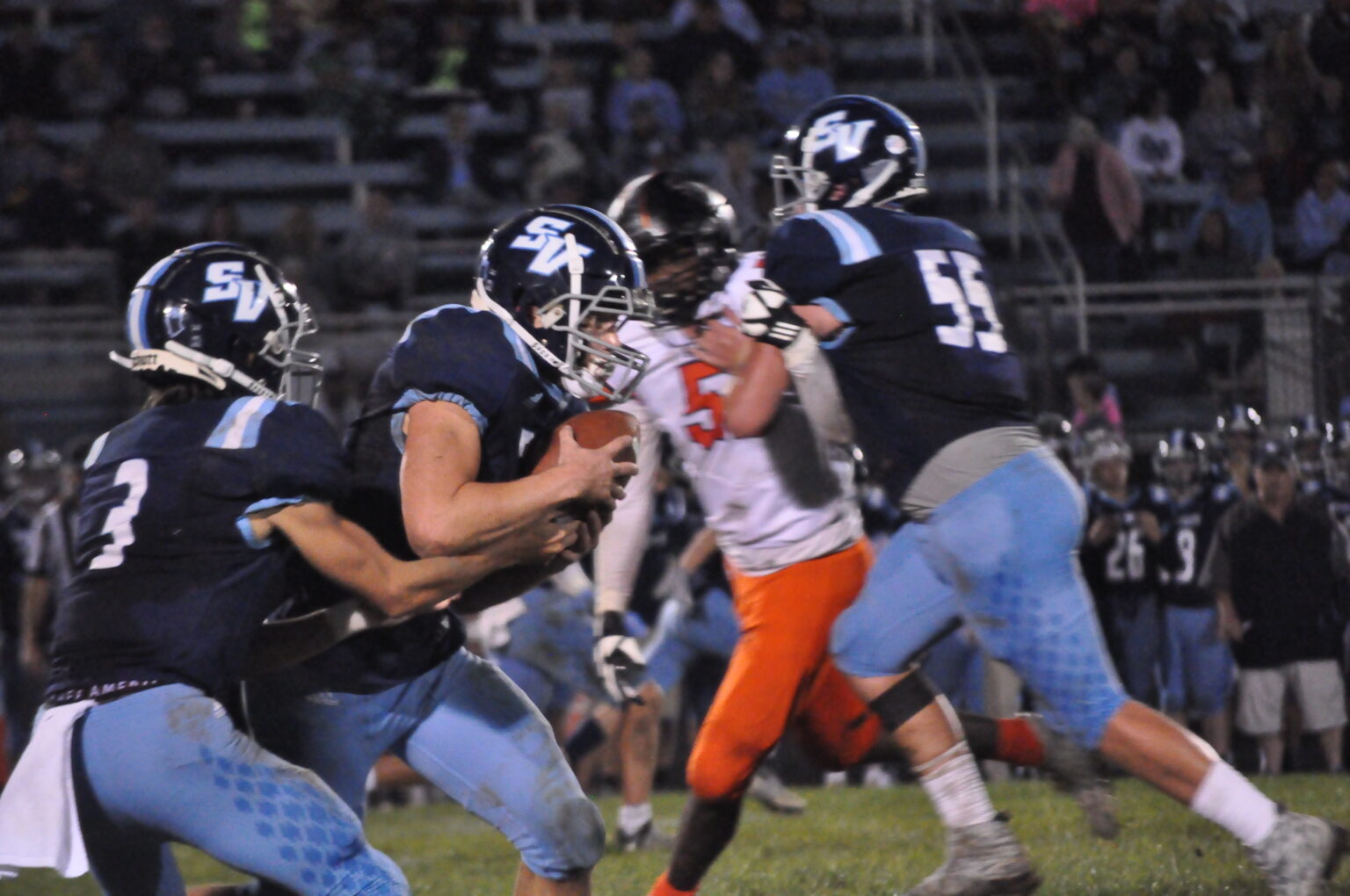 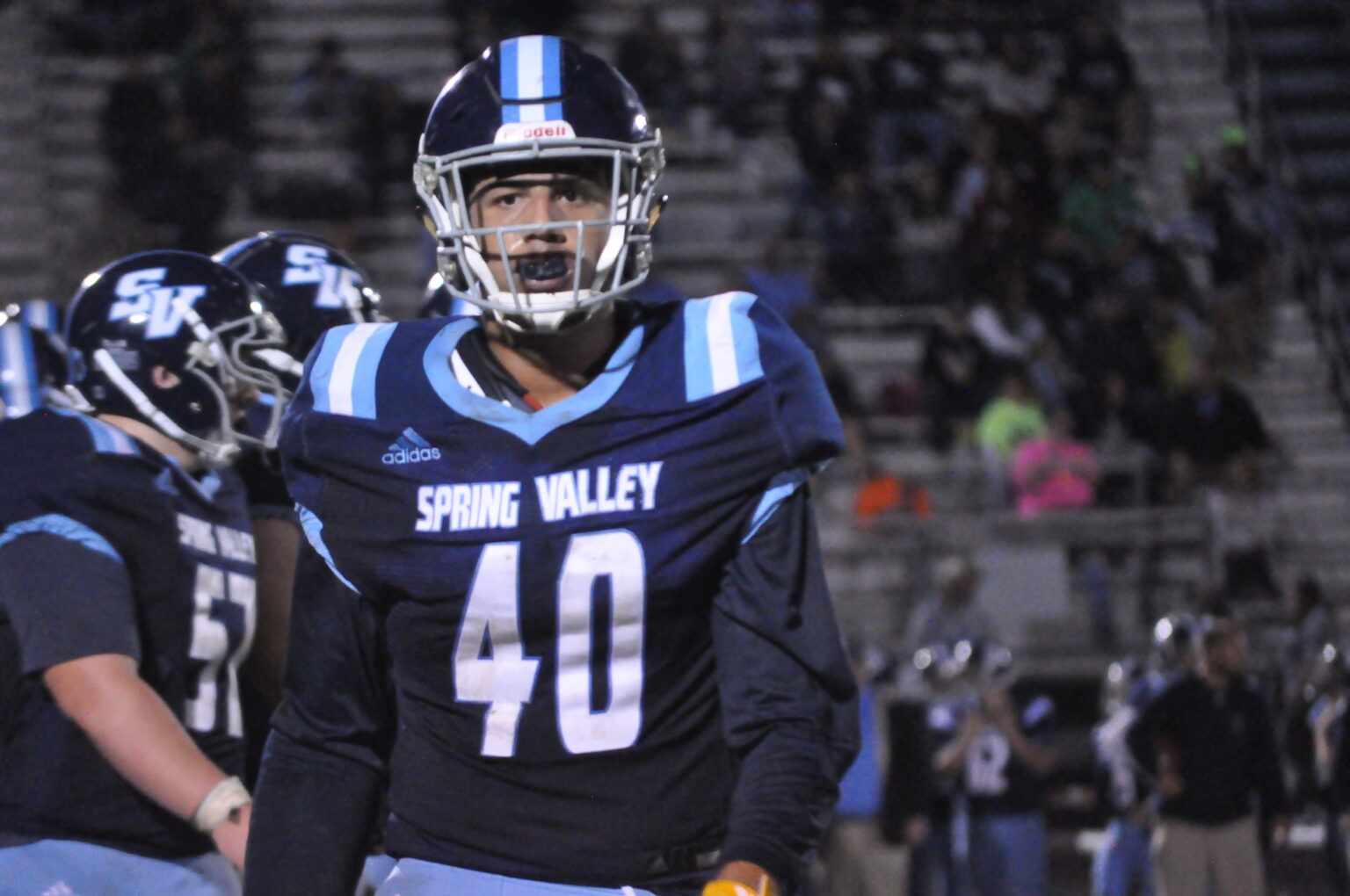 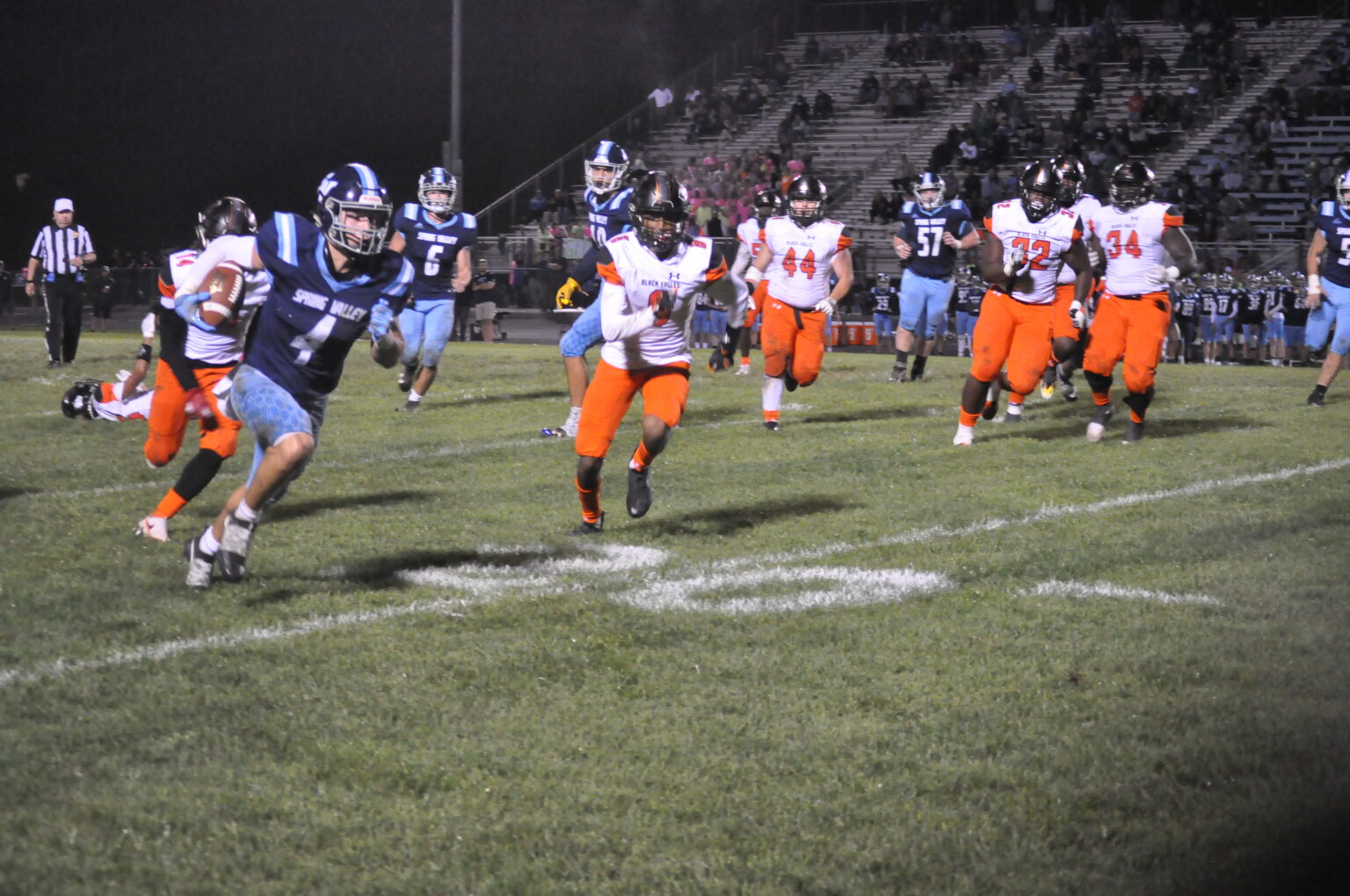 Spring Valley's Ty Bartrum races to the end zone on one of his two touchdown catches. Photo by Greg Carey/WVMetroNews.com 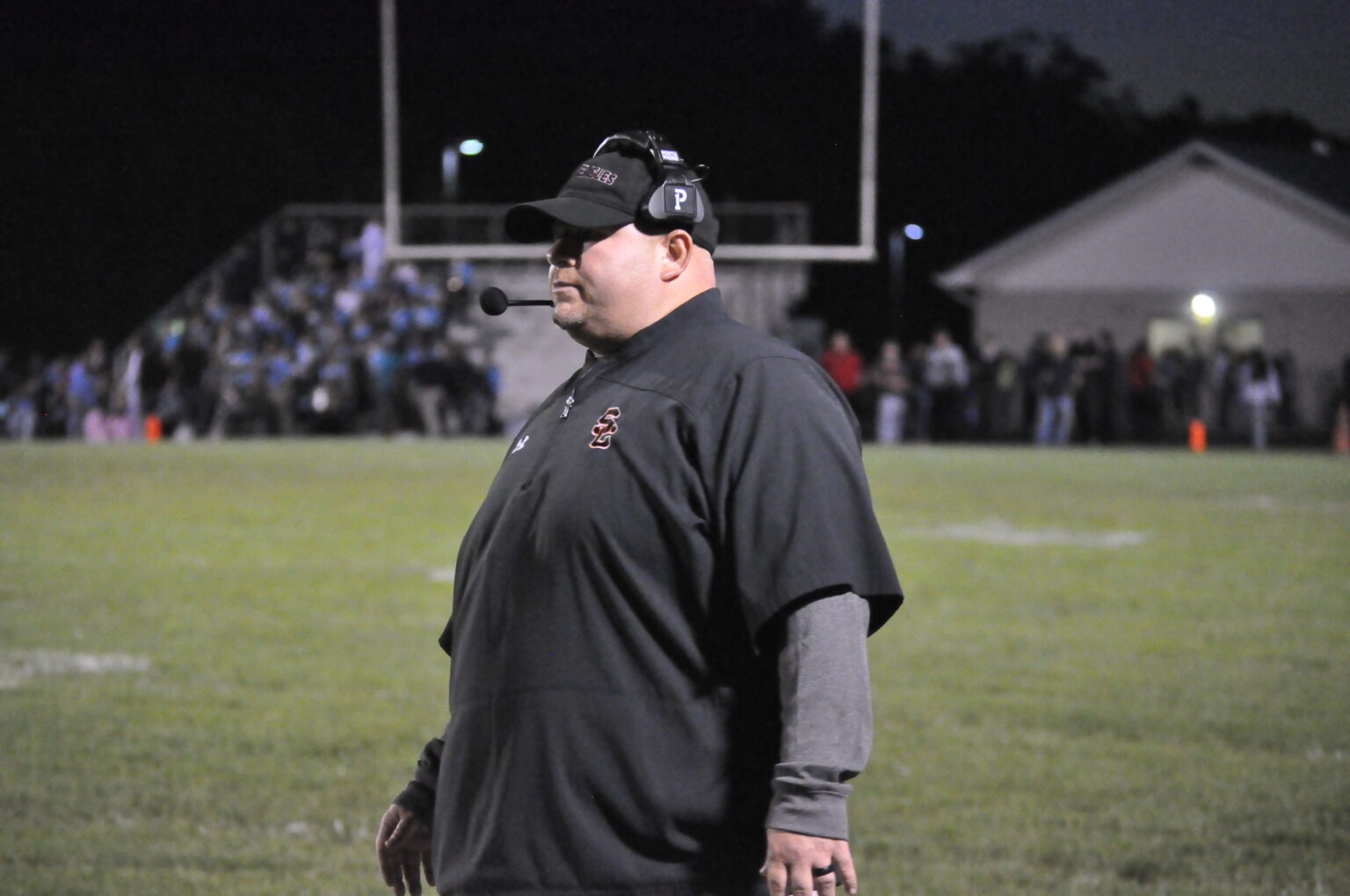 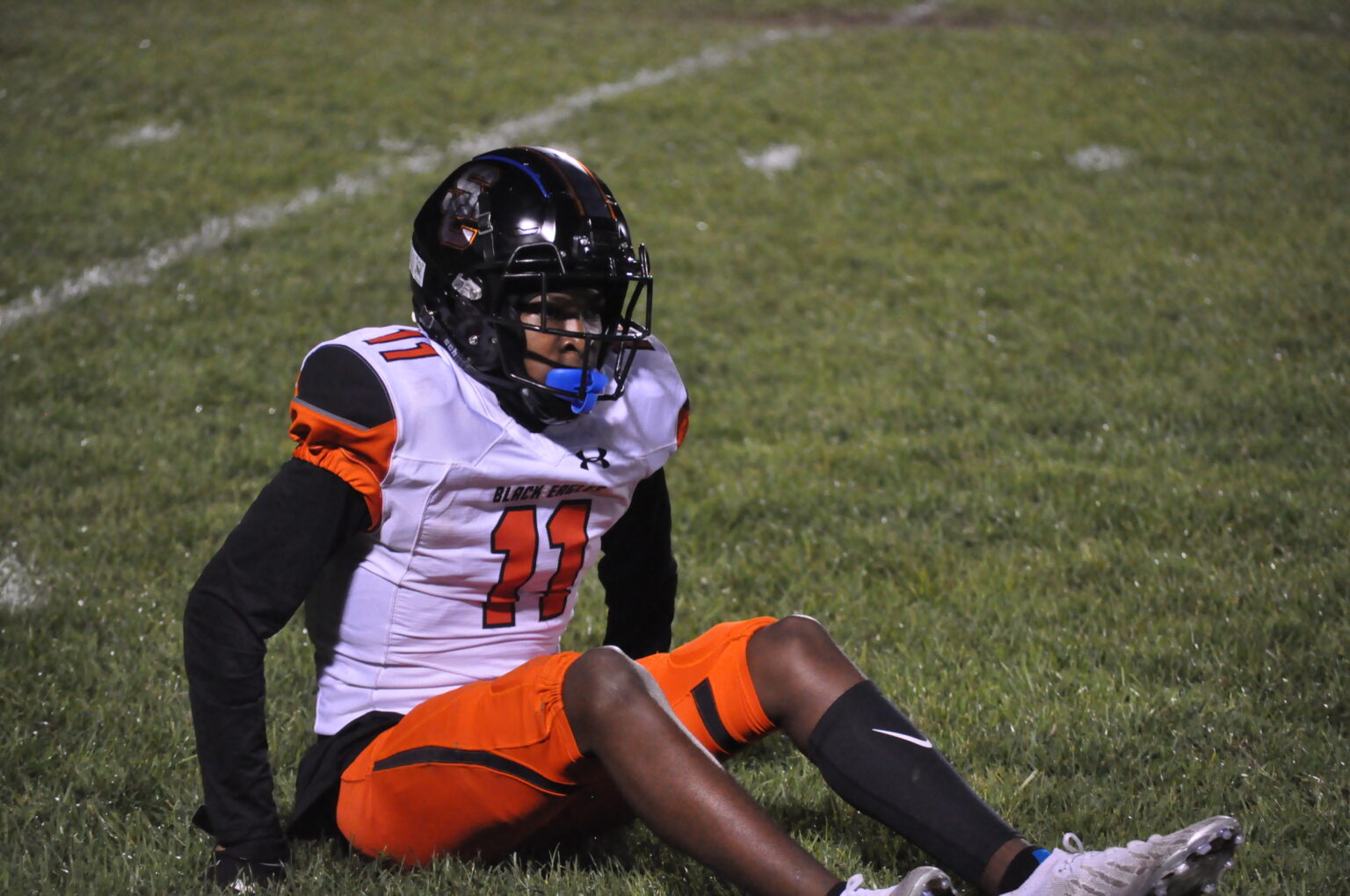 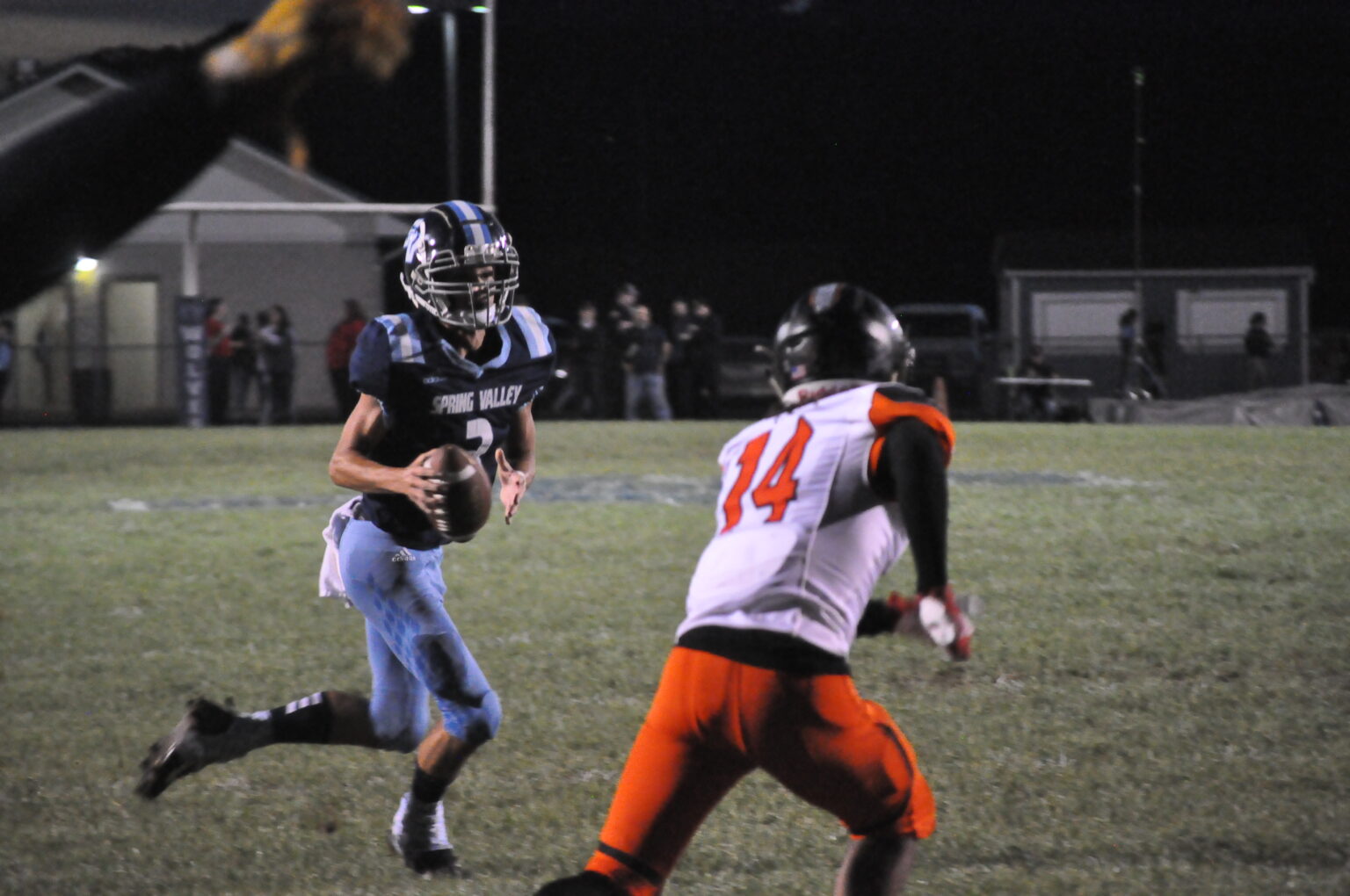 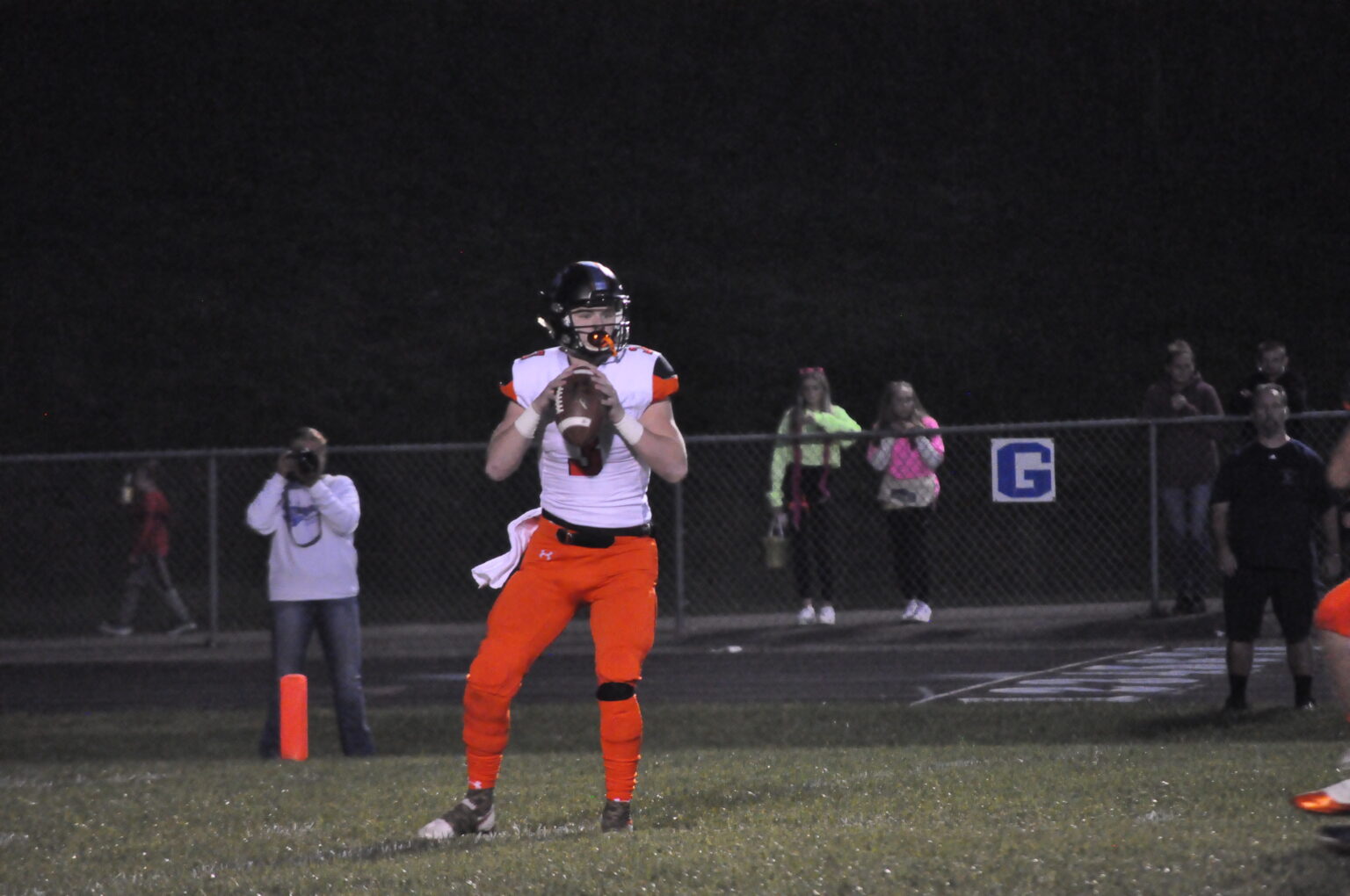 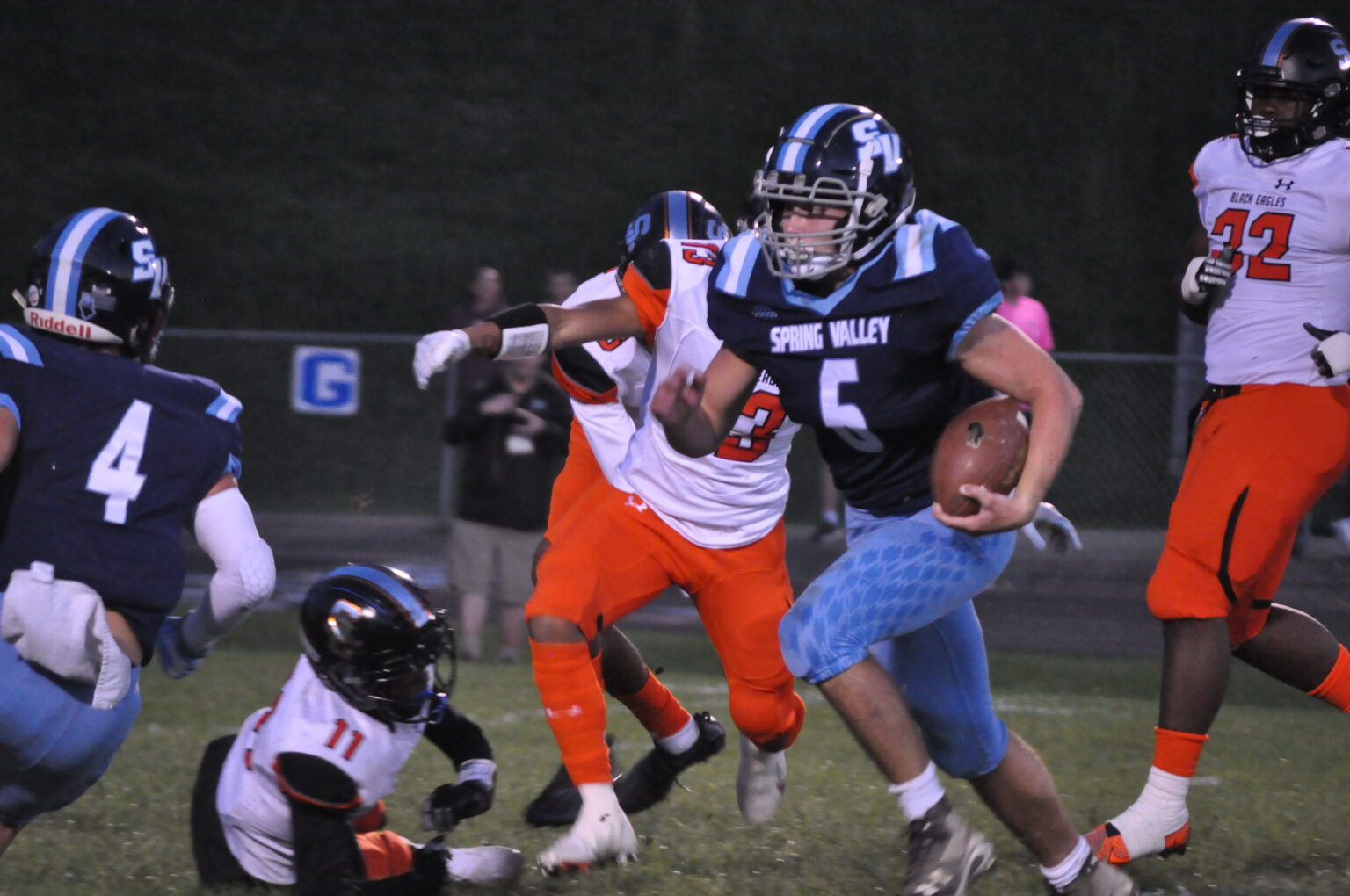 HUNTINGTON, W.Va. — Spring Valley is known for its ball control attack offensively, one that prides itself on physicality, controling the ball and continuously generating a push up front.

Those traits were on display Friday in the ninth-rated Timberwolves’ 440-yard effort against Class AAA No. 5 South Charleston.

So, too, was a passing attack Spring Valley doesn’t regularly rely on, as the Timberwolves put together a dominant effort to hand the Black Eagles their first loss since the 2019 season, 53-8.

“We played really well,” Spring Valley coach Brad Dingess said. “Our defense played well. We were able to get pressure on the quarterback, which we’ve struggled with in a couple games. We controlled the line of scrimmage and on offense, we mixed it up pretty good between run and pass. We kept them on their heels a little bit and just took what they gave us.”

The Timberwolves were in control throughout. They scored on their first play from scrimmage on Jace Caldwell’s 32-yard run, capitalizing on good field position Caldwell provided with a long kickoff return.

Leading 7-0, the Timberwolves stalled out inside the South Charleston 5-yard line on each of their next two series, but responded by forcing a three-and-out on both occasions. The second one created a punt snap that went out of the back of the Black Eagles’ end zone for a safety, leaving the Timberwolves with a 9-0 lead at the 3:07 mark of the first quarter.

“The only good thing about today was our goal-line stands,” SC coach Donnie Mays said. “That was it. Besides that, we were awful. We played bad football and we coached bad. It was just a bad day for us. It was one of those days where you wish you could start over.”

On the ensuing possession, Fouch threw a 32-yard touchdown pass to Cody Shy that left the Timberwolves (4-1) with a 16-0 lead.

Trey Dunn’s 49-yard pass to Jah’Den Estep helped setup Amellio Miller’s 1-yard touchdown run and the Black Eagles (3-1) cut the deficit to eight when Estep brought in the two-point pass. But that proved to be the final scoring play for South Charleston, which managed only 120 yards playing without wideouts Wayne Harris and Chris McCorkle, who were suspended for a violation of team rules.

“Our game plan changed today, because we had a team violation and we had to put a couple kids out for this game,” Mays said. “It just changed a lot of stuff that we were trying to do and creates different personnel that hadn’t been in certain spots. Things like that snowball. It was a nightmare from the beginning.”

Fouch’s 24-yard touchdown pass to Ty Bartrum came just 2:25 after the South Charleston (3-1) touchdown and put the visitors in a 23-8 hole.

Bartrum also brought in a 41-yard TD pass from Fouch 33 seconds before halftime, leaving the Timberwolves with a 29-8 lead.

“Fouch has done a phenomenal job for us this year,” Dingess said. “We feel like with our receivers, if you try to guard them one-on-one, we have the advantage. Our kids are pretty good out there on the perimeter and if we can get some guys out of the box, then we can run the football. It’s a good balance.”

On the first play of the second half, Bartrum intercepted Dunn — one of three Spring Valley interceptions in the quarter.

Fouch’s 61-yard pass to Ben Turner put the quarterback in position to score on a 5-yard run on the next play.

Two plays later, Caldwell intercepted Dunn and raced 47 yards to the end zone, leaving the Timberwolves with a 43-8 advantage.

Landon Mosser’s 22-yard field goal sent SVHS into the fourth with a 46-8 lead, and Ty Allen capped the scoring with a 4-yard run during a fourth quarter that was played with a running clock.

“It’s not a fun place to play at and I tried to explain that to the kids,” Mays said. “It’s the only place we play all year that has grass and it changes the mentality. But those are excuses and we just got our butts kicked tonight.”

The victory was Spring Valley’s fourth straight and sets up another showdown next week for the Timberwolves, who play at unbeaten Huntington.

“It was one of those that it wasn’t a must win,” Dingess said, “but if you’re going to play at home in the playoffs and possibly make a run, this is one we had to have.”