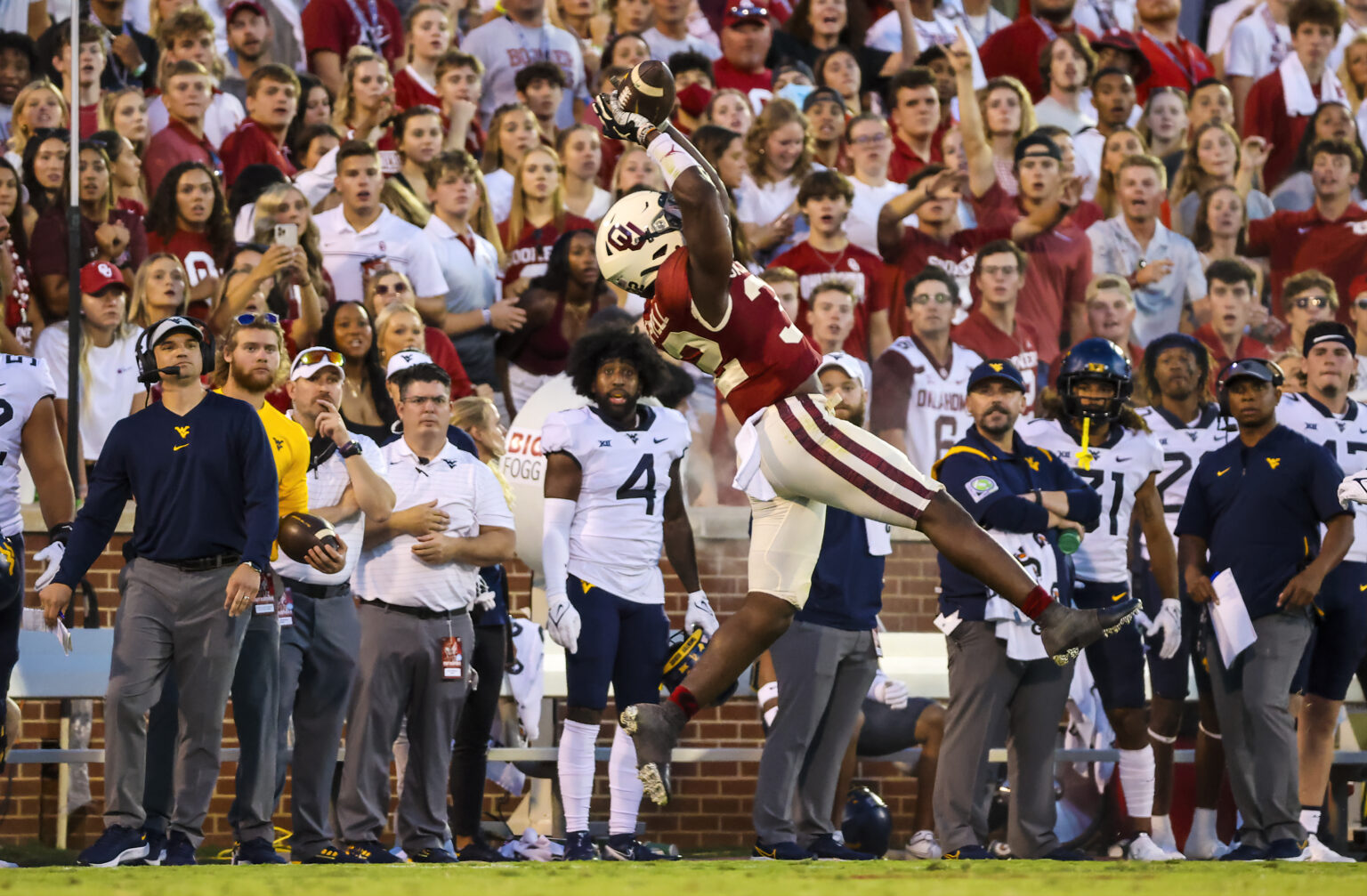 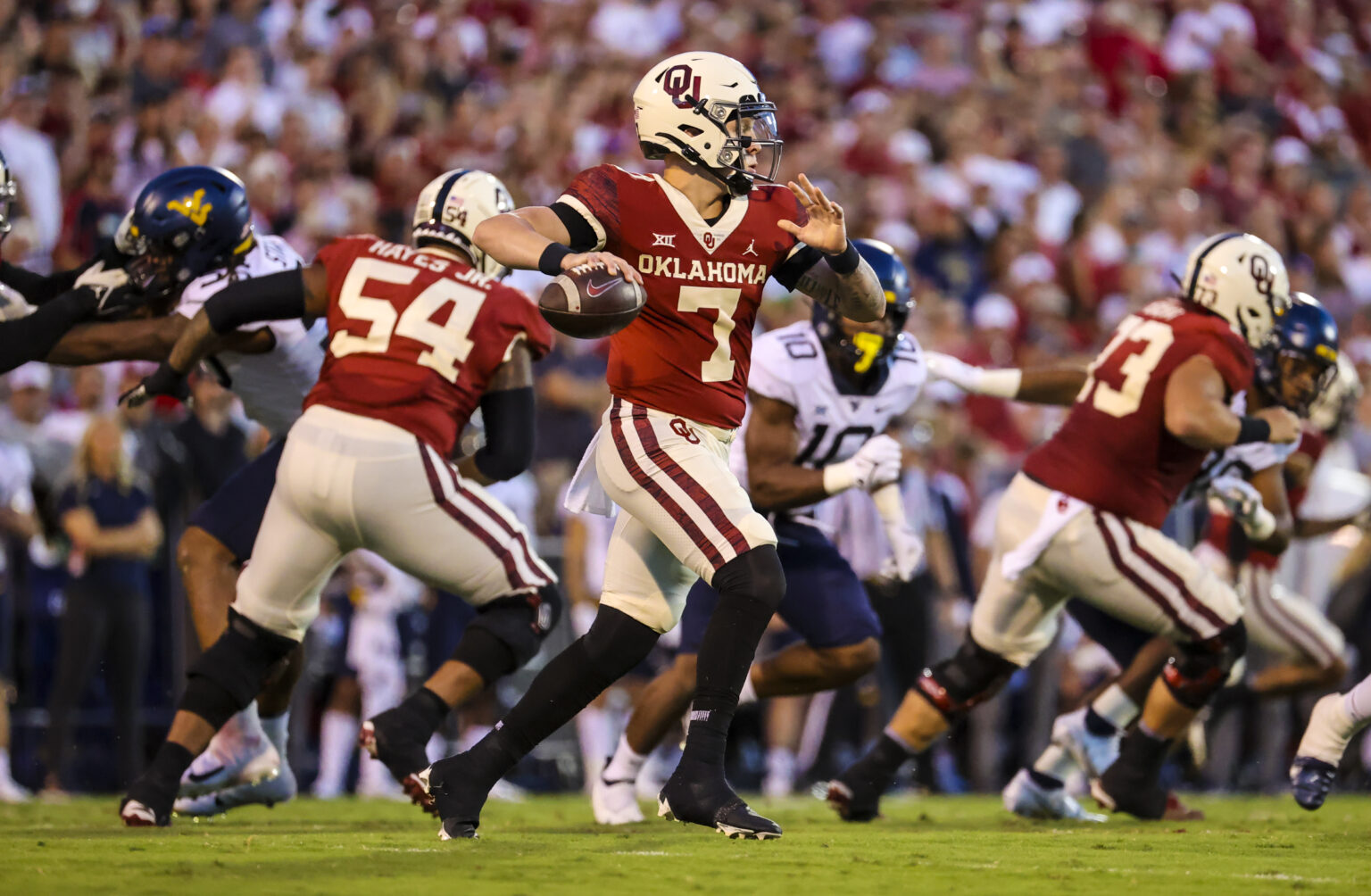 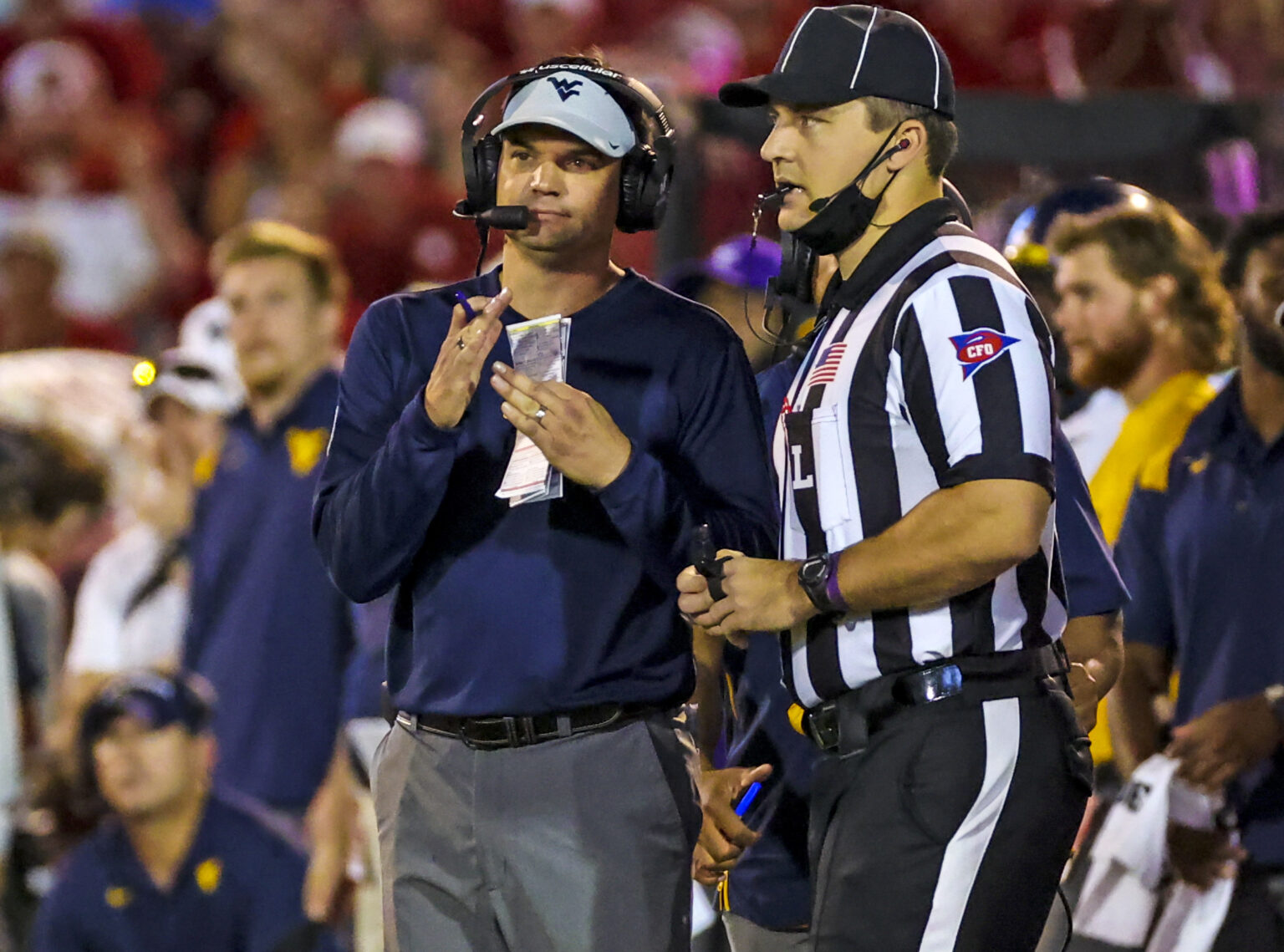 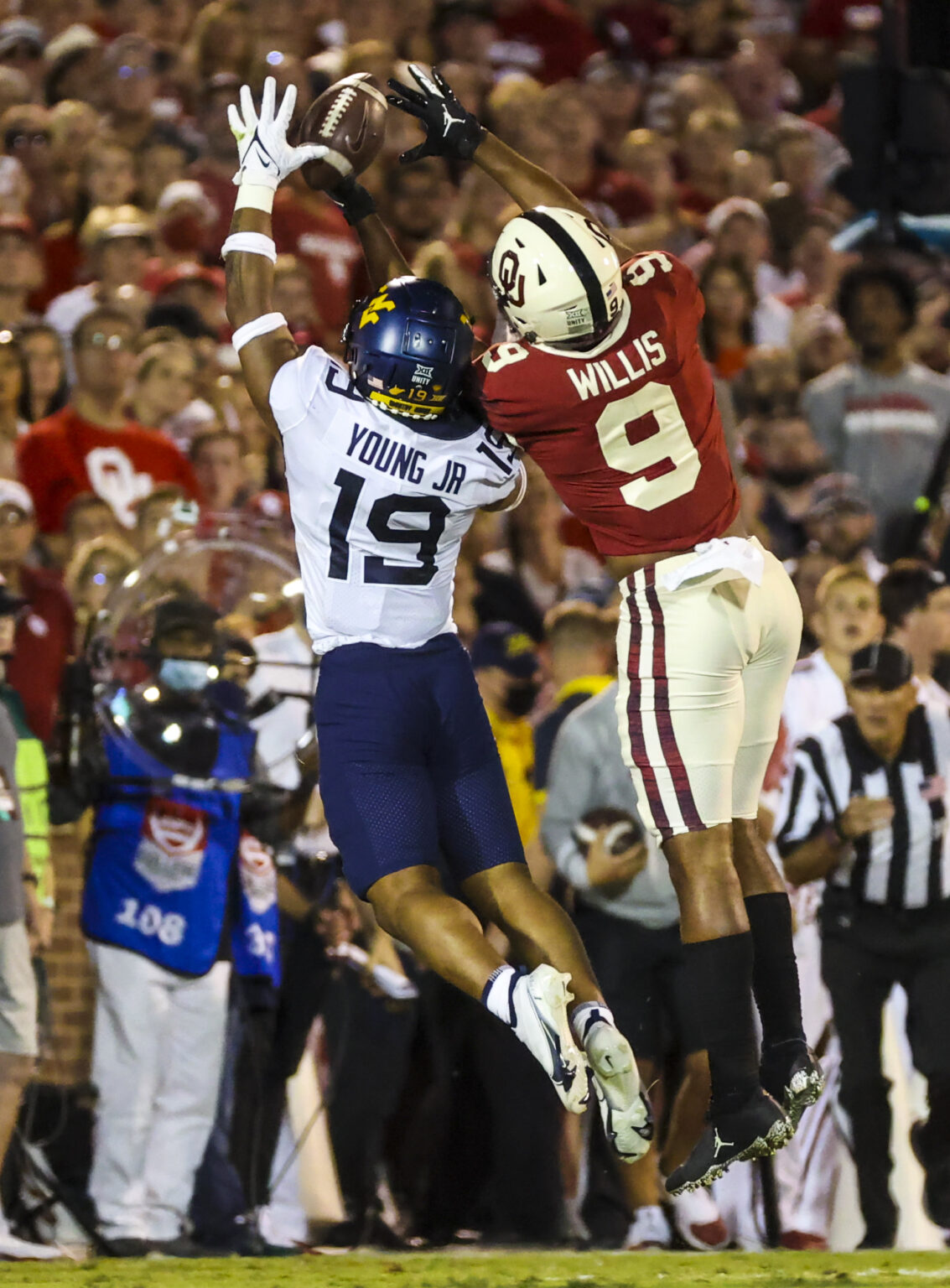 Oklahoma's Spencer Rattler (7) celebrates with Austin Stogner (18) after a touchdown during a college football game between the University of Oklahoma Sooners (OU) and the West Virginia Mountaineers at Gaylord Family-Oklahoma Memorial Stadium in Norman, Okla., Saturday, Sept. 25, 2021.Lx11126 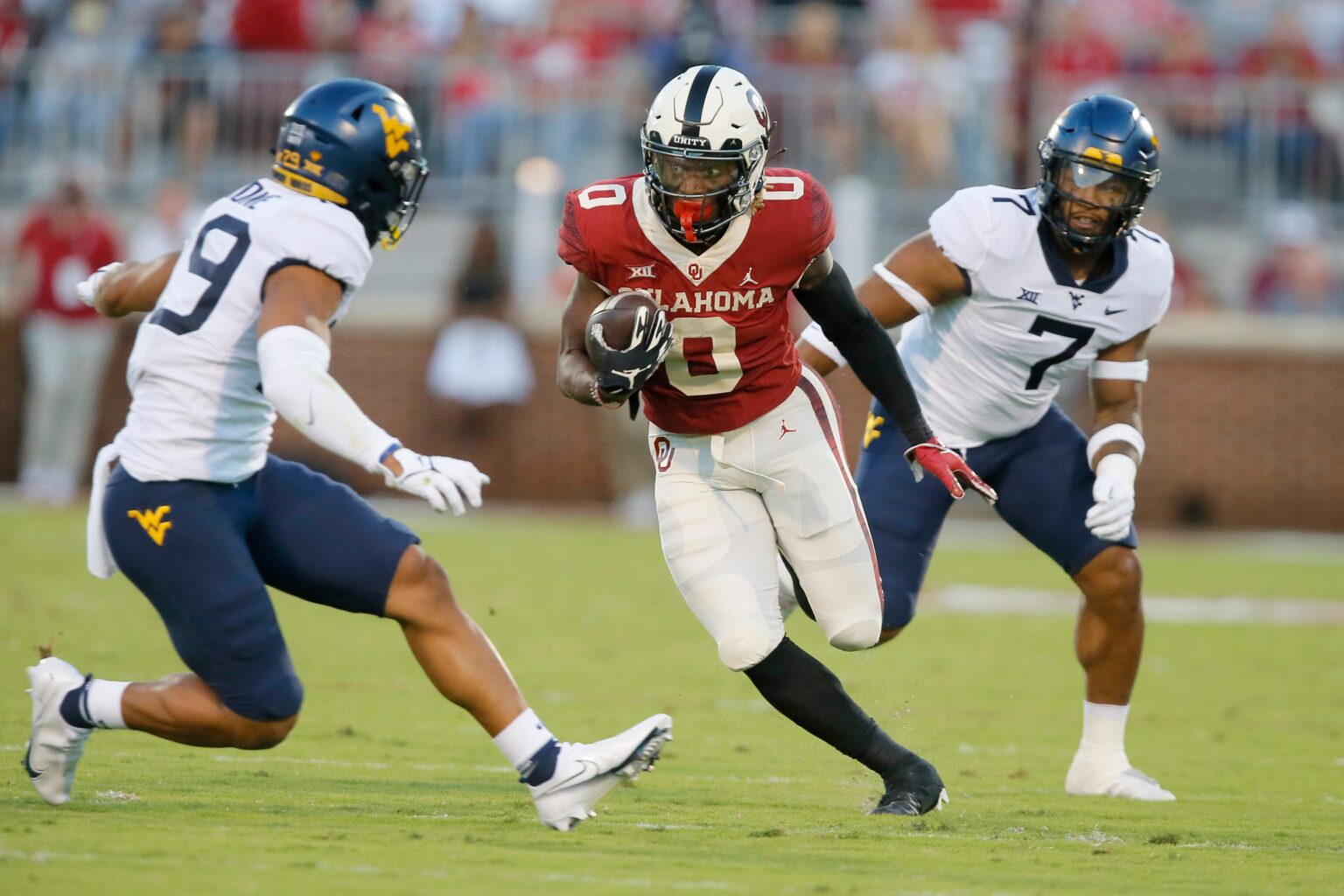 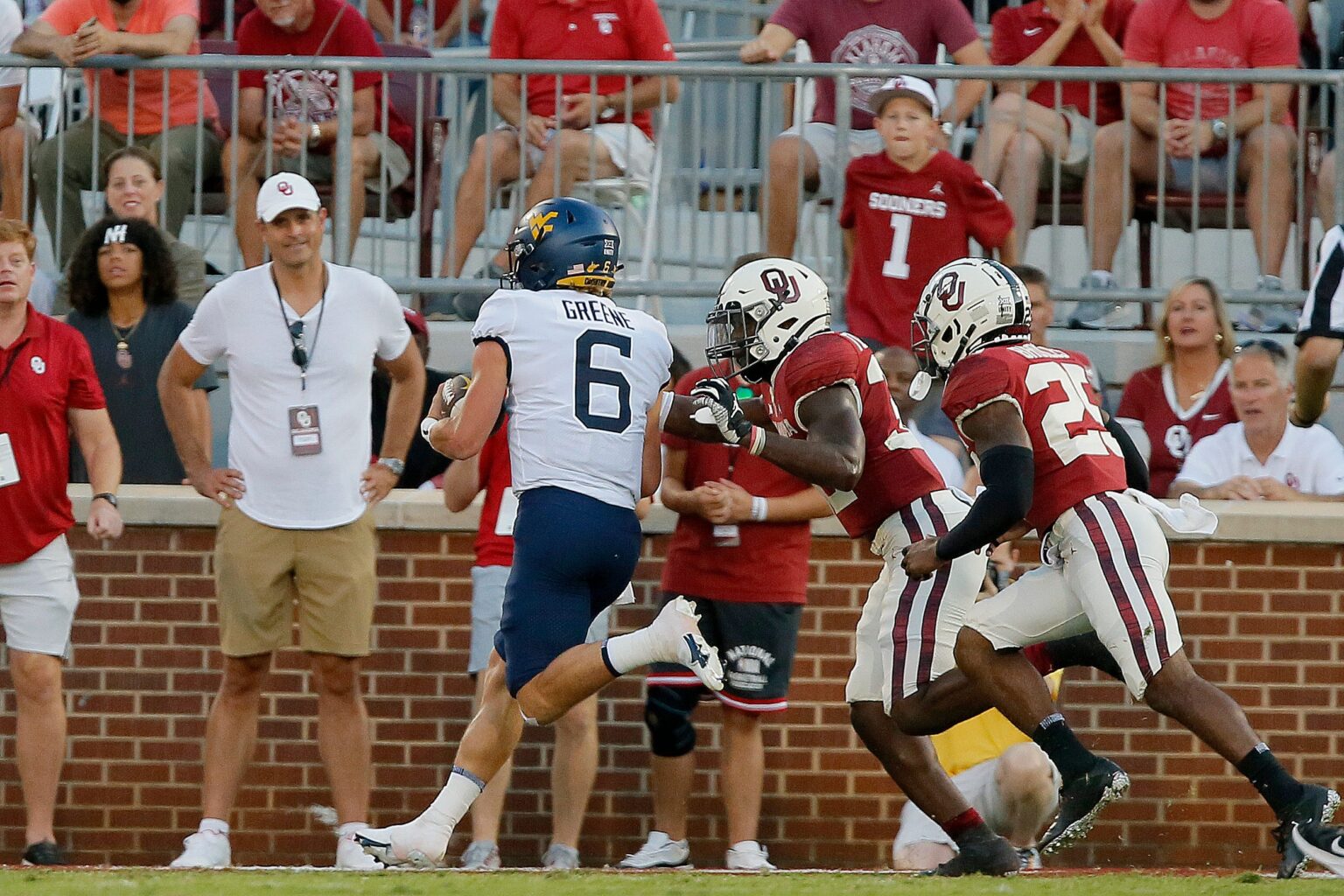 West Virginia's Garrett Greene (6) runs past Oklahoma's Delarrin Turner-Yell (32) and Justin Broiles (25) for a touchdown during a college football game between the University of Oklahoma Sooners (OU) and the West Virginia Mountaineers at Gaylord Family-Oklahoma Memorial Stadium in Norman, Okla., Saturday, Sept. 25, 2021.Lx10629 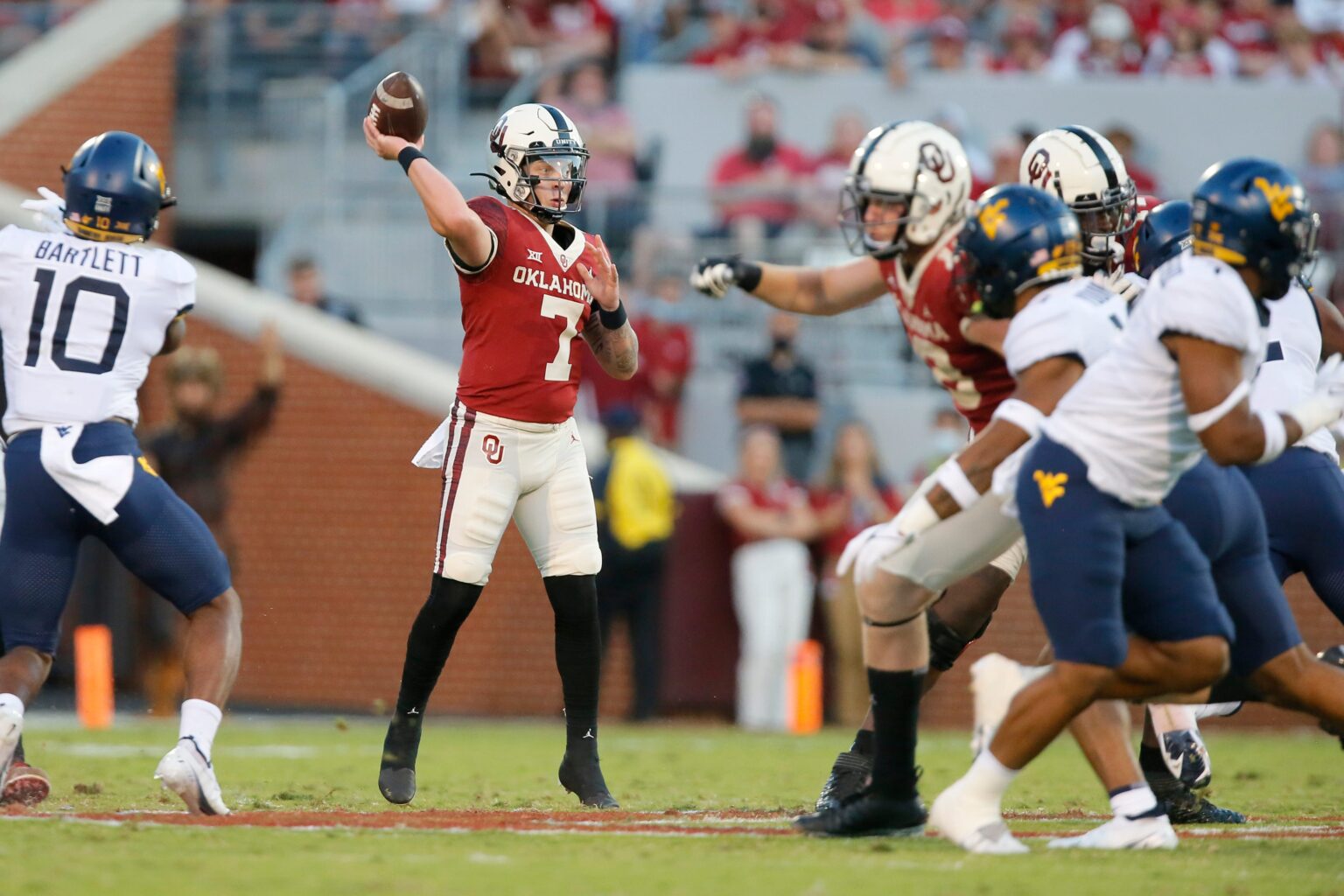 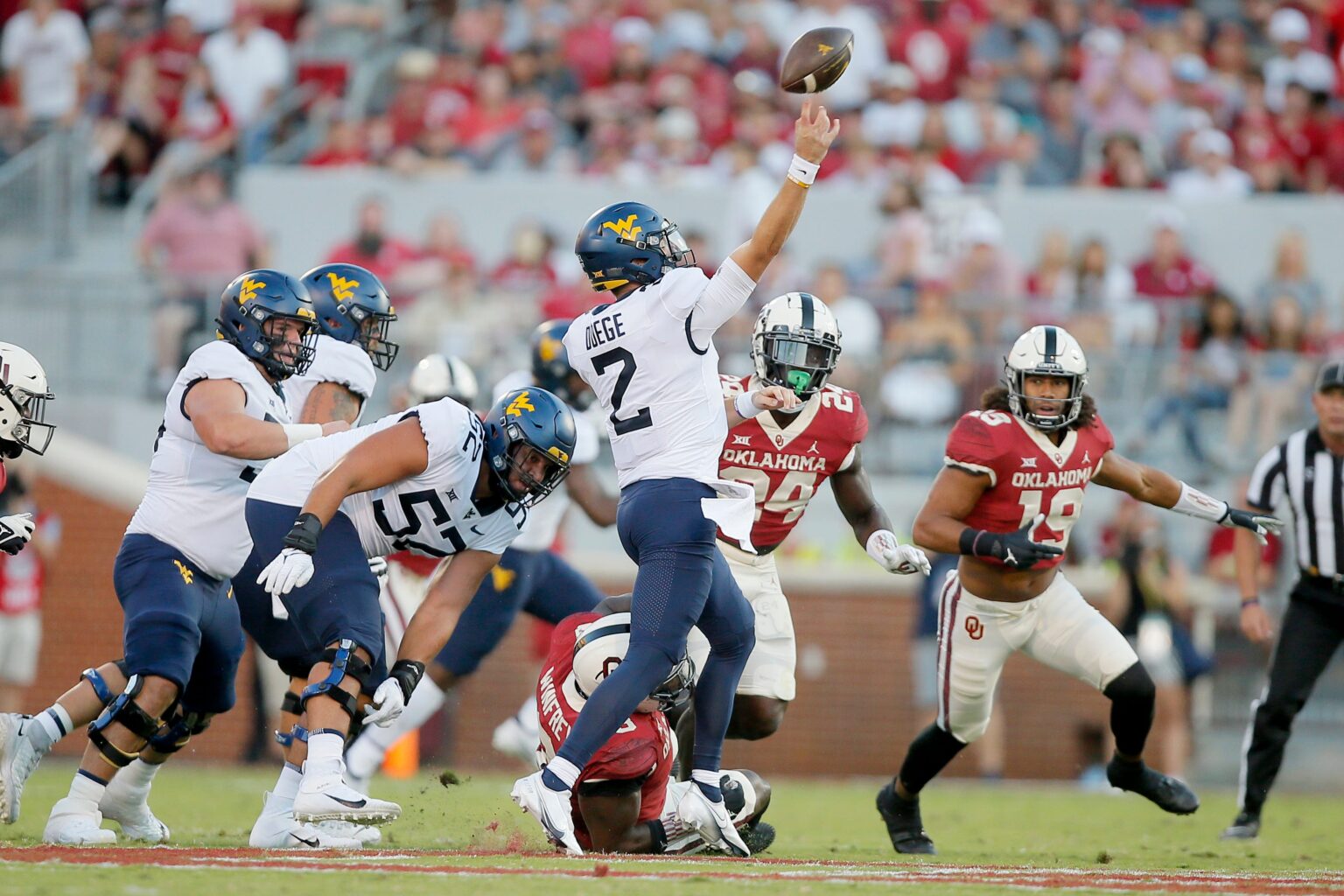 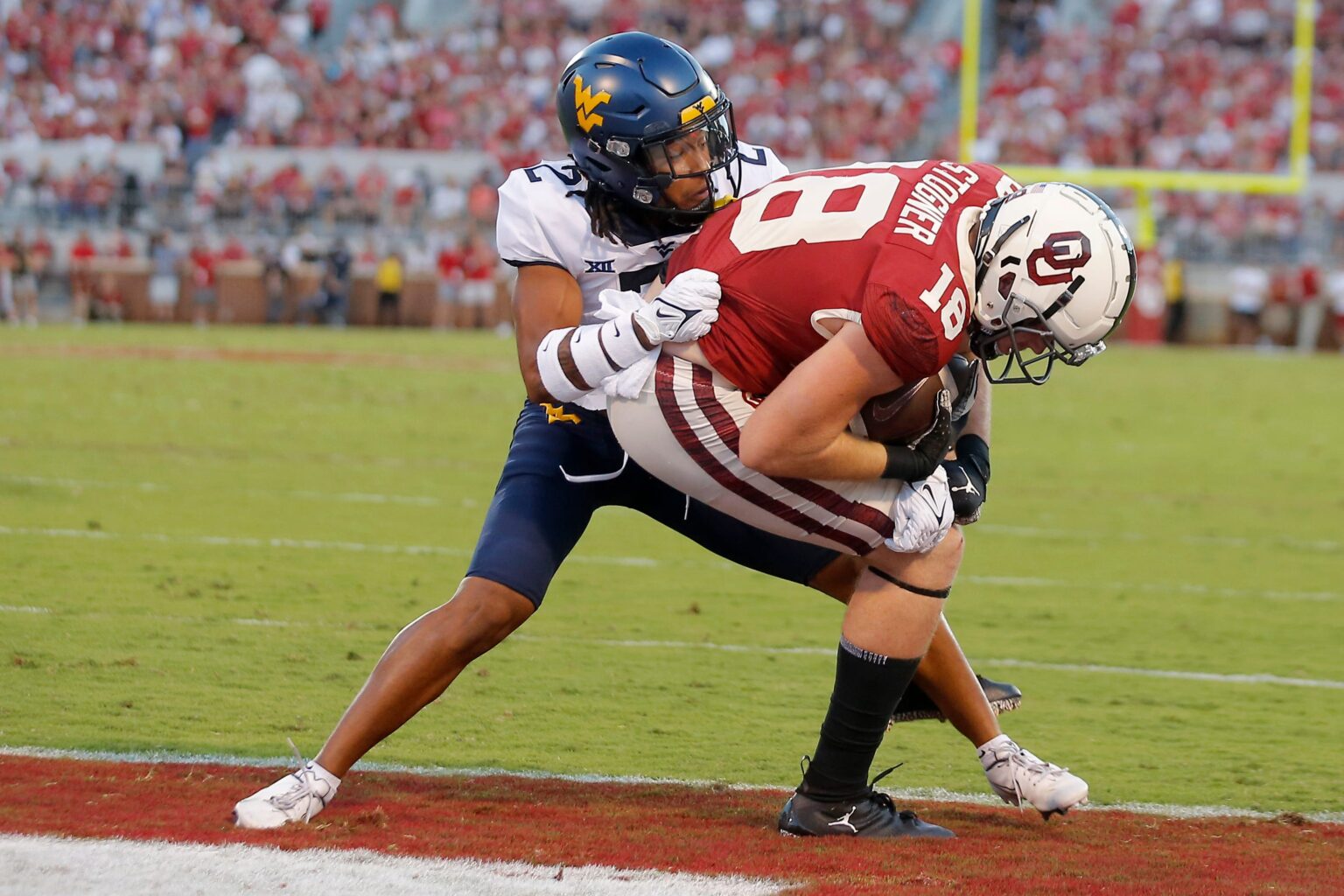 Oklahoma's Austin Stogner (18) catches the ball for a touchdown beside West Virginia's Daryl Porter Jr. (2) during a college football game between the University of Oklahoma Sooners (OU) and the West Virginia Mountaineers at Gaylord Family-Oklahoma Memorial Stadium in Norman, Okla., Saturday, Sept. 25, 2021.Lx11077 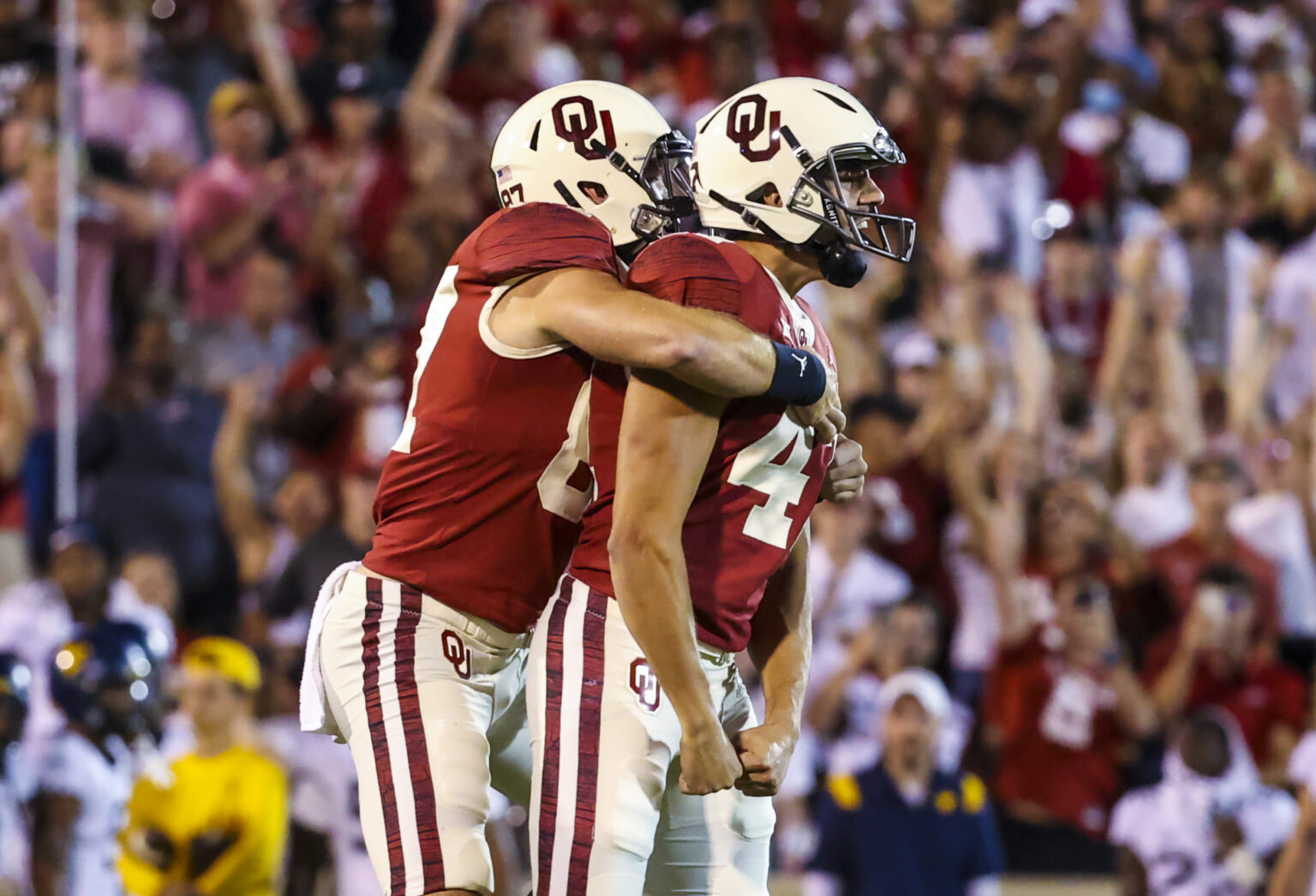 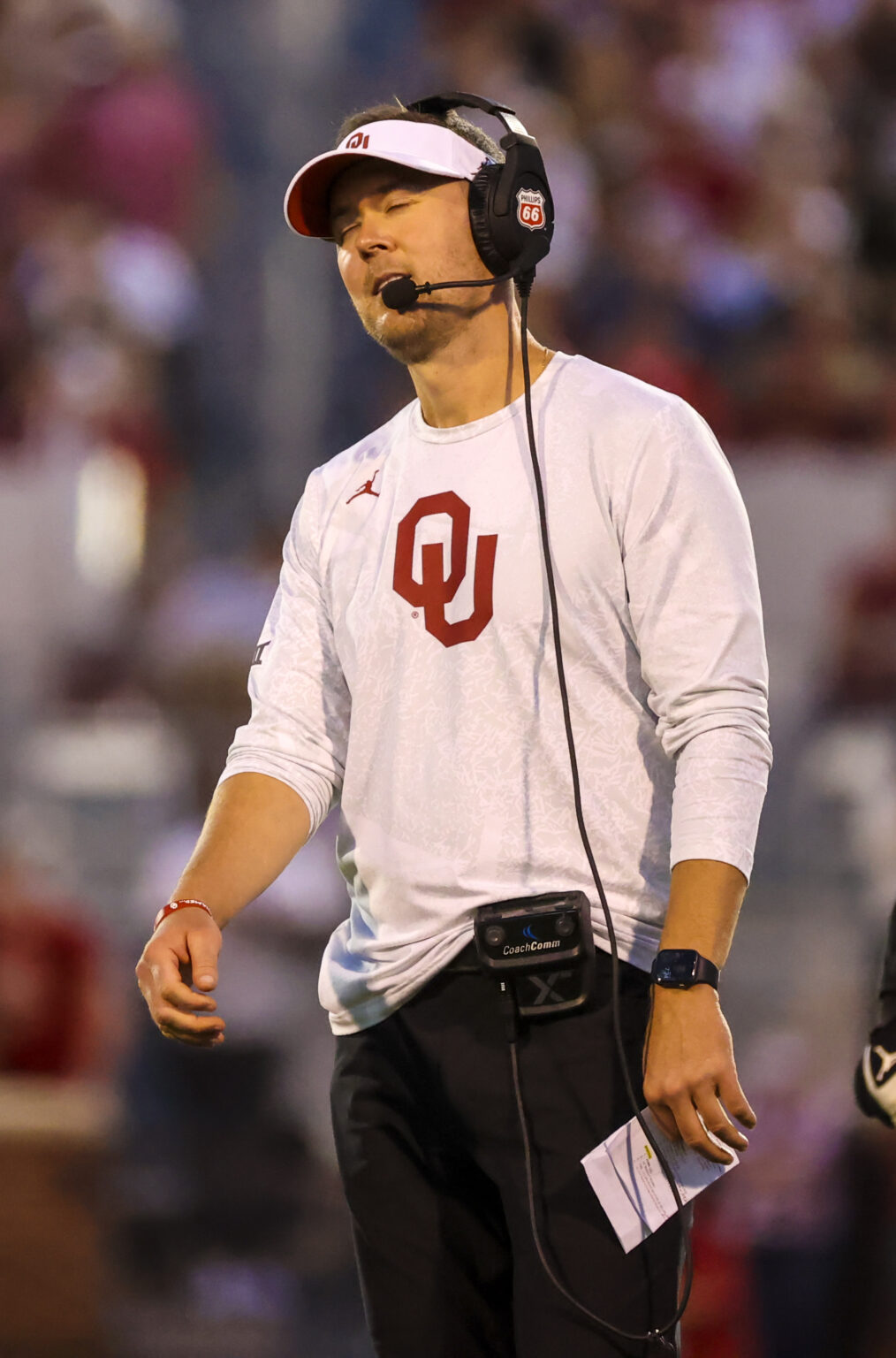 Oklahoma's David Ugwoegbu (2) and Pat Fields (10) bring down West Virginia's Bryce Ford-Wheaton (0) during a game between the Sooners and Mountaineers at Gaylord Family-Oklahoma Memorial Stadium in Norman, Okla., Saturday, Sept. 25, 2021.

Oklahoma’s Gabe Brkic made a 28-yard field goal on the game’s final play, giving the Sooners their first lead and a 16-13 victory over the Mountaineers at Gaylord Family Oklahoma Memorial Stadium.

“I hurt in the pit of my stomach for our players,” WVU coach Neal Brown said. “I hurt because we had a plan and fought against a team that year in and year out is at the top of the recruiting rankings, and year in and year out is in the top 5 or 10 in the country. They’ve been dominant in our league and dominant at home for the most part, especially since Lincoln [Riley] has been the head coach.

“We had an opportunity to win and we just didn’t. That’s hard when you invest like we have and we had a great week and great prep.”

West Virginia (2-2, 0-1) was exceptional defensively throughout the game, but scored its only touchdown on the opening drive.

On their only fourth-quarter series, the Mountaineers got to the Oklahoma 28-yard line and put themselves in position to break a 13-all tie. An illegal snap infraction moved WVU back, and the next play proved disastrous when it appeared Jarret Doege wasn’t ready for Zach Frazier’s shotgun snap, with the Mountaineer quarterback being forced to fall on the ball for a loss of 21 yards.

“I’m not sure what happened,” Brown said. “We hadn’t had a bad snap up until that point. I’m sure the noise was a factor. I’m not sure whether they said something or not; that happens. That was uncharacteristic and even with that, we still had chances.”

Two plays later, Tyler Sumpter punted for the fifth time, and the Sooners (4-0, 1-0) never allowed WVU to get the ball back.

Despite being held to its lowest scoring output since the 2014 Russell Athletic Bowl, Oklahoma delivered when it mattered most. A 14 play, 80-yard drive put Brkic in position to win the game with his third field goal.

The Sooners faced only one third down on the series, and although Akheem Mesidor was flagged for a facemask, OU was already in position for Brkic’s kick to be the last play.

“They executed in critical situations at the end of the game better than we did,” Brown said. “But they didn’t play any harder or more physical than we did.”

WVU’s only points of the second half came on Casey Legg’s 21-yard field goal that broke a 10-all tie with 5:21 to play in the third quarter. The Mountaineers were in prime position to score their first second-half touchdown this season against a FBS opponent, but Parker Moorer was whistled for a false start on second-and-goal from the OU 1.

“We had a penalty on second-and-goal at the 1 and we were going to walk in,” Brown said. “That hurts.”

Two plays later, Doege couldn’t connect with Bryce Ford-Wheaton, who was open in the end zone on third down.

“We’re going to go watch it on film tomorrow and Monday, and just go back to the lab and keep working,” Ford-Wheaton said. “We have to not shoot ourselves in the foot and capitalize on every opportunity we get.”

On Oklahoma’s ensuing series, Kennedy Brooks was stopped short on fourth-and-1 from the WVU 49.

But just as WVU regained possession, Doege was immediately called for intentional grounding, which led to a three-and-out.

The Sooners got even at 13 on Brkic’s 35-yard field goal with 8:52 left after being forced back on a holding penalty and Dante Stills’ sack when they reached the red zone.

A 17 play, 75-yard drive to start the contest was finished off by Garrett Greene’s 2-yard touchdown run and allowed WVU to take a 7-0 lead and use 9:07 of the first-quarter clock.

“We had a good game plan going in,” Ford-Wheaton said.

The Sooners covered 52 yards on their opening series and produced their lone touchdown on Spencer Rattler’s 4-yard pass to Austin Stogner.

The teams swapped second-quarter interceptions, as Doege was picked off by Delarrin Turner-Yell, before Jackie Matthews snatched a Rattler pass for WVU’s first interception of the season.

Legg’s 25-yard field goal on the final play of the half allowed WVU to lead 10-7 at the break.

“I know everybody wants to talk about quarterbacks and I get it,” Brown said. “We’d like to score more points. That bunch is pretty good. They’re playing as good defensively as anybody right now.”

Ford-Wheaton led all receivers with eight catches for 93 yards and Winston Wright added seven grabs for 65 yards in defeat.

Leddie Brown was limited to 56 yards on 15 carries and the Mountaineers had 226 total yards and 3.6 yards per play.

Rattler completed 26-of-36 passes for 256 yards. Mike Woods was his favorite target and hauled in eight passes for 86 yards.

“Our defensive staff and defensive players played their tail off,” Brown said. “We felt good about it coming in. I told our players as you look through this conference since we joined it in 2012, Oklahoma has been the team to beat. We’ve tried outscoring them and that doesn’t work. So when we got here and started putting a foundation on how we want to build this thing to give us an opportunity to win our league, we felt like we had to play great defense.

“If you go back to when we got beat by Texas Tech in 2019, since then we’ve played great defense minus a game or two.”