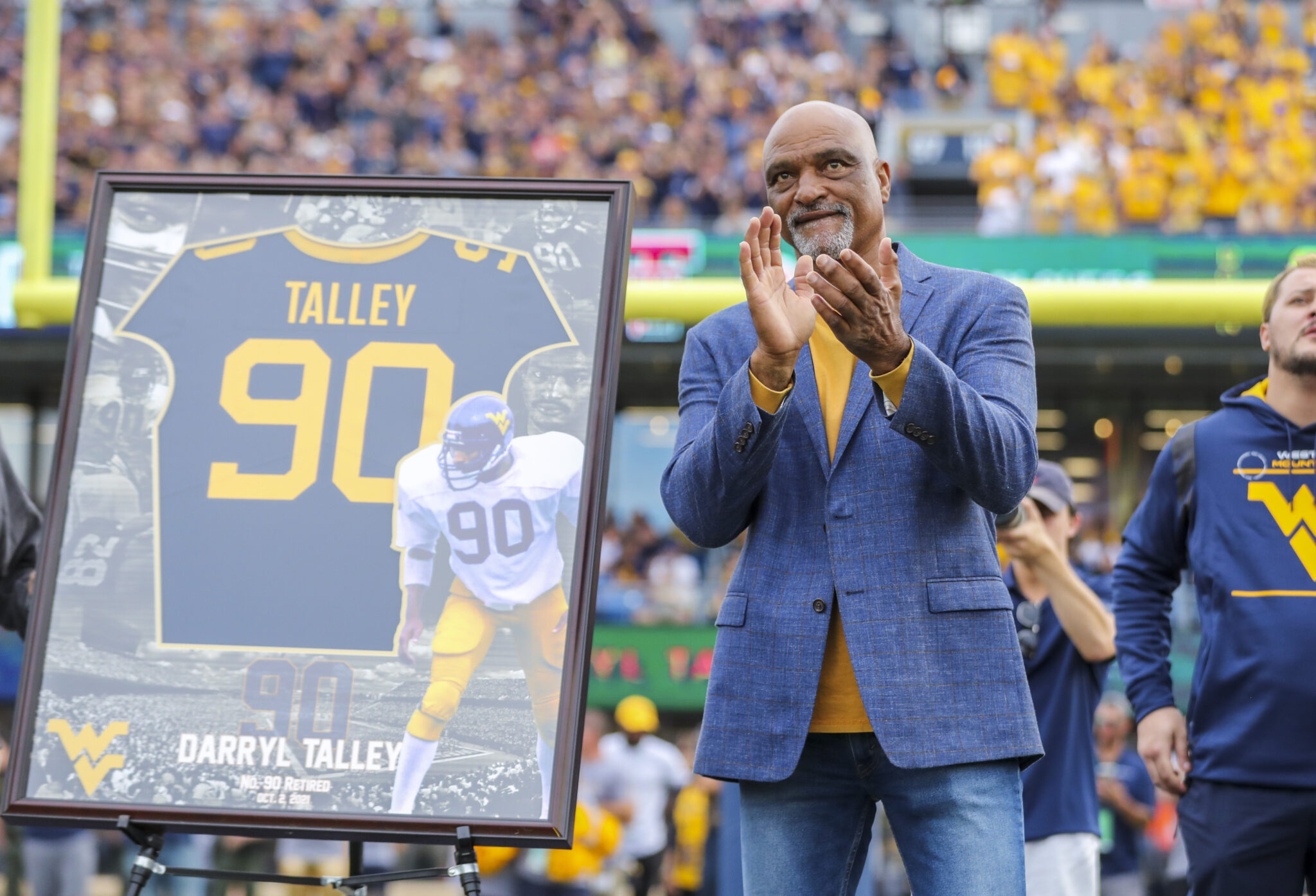 Former West Virginia Mountaineer and former Buffalo Bill Darryl Talley is honored and has his number retired during the first half of their game against the Texas Tech Red Raiders at Mountaineer Field at Milan Puskar Stadium. Mandatory Credit: Ben Queen-USA TODAY Sports

MORGANTOWN, W.Va. — Darryl Talley left West Virginia in 1983 as one of the more decorated defenders in the history of Mountaineer football.

That remains the case nearly 40 years later, and Talley became the fourth West Virginia football player to have his jersey retired Saturday during a ceremony at Milan Puskar Stadium between the first and second quarters of the Mountaineers’ matchup with Texas Tech.

“I’m just truly happy that I finally got to, as they say, the summit of what it is in college,” Talley said. “That’s what I consider this to be and the highest honor you can get. I’m very proud of it.”

Over his playing career from 1978-1982 at WVU, Talley, a linebacker, recorded 19 sacks and 35 tackles for loss. He went on to become one of the better defenders to play for the Buffalo Bills after the franchise drafted him with the 39th overall pick in 1983.

Originally recruited by Frank Cignetti, Talley redshirted in 1978 and then played one season for Cignetti before he became sick and Don Nehlen took over as head coach in 1980.

The Mountaineers finished 5-6 in 1979 and 6-6 the following season, before winning nine games each of Talley’s last two years in Morgantown.

“The 1977, 1978 and 1979 classes were the three years that actually turned West Virginia University around,” Talley said. “We all put it on the line for each other and did what we had to do for each other. It was some scarce times back then. It was a lot of fun. I have great friends from then and we’re still all in a group text today.”

Regarded as a player who thrived on physicality, Talley made major strides after coming to Morgantown from Shaw High School in Cleveland. As a senior at Shaw, Talley was limited to only three games due to an injury, yet he showed enough promise to get a scholarship at WVU.

When Talley arrived at West Virginia, he admits he needed to mature.

In fact, while Talley was redshirted during the 1978 season, a photo surfaced of him sleeping on the bench during a game.

“I went from sleeping on the field to being a consensus All-American to playing in four Super Bowls,” he said. “Yes, I did do that. I woke up and truly started to work on my craft and do the things that were conducive for me to win.”

Talley earned the consensus All-American status in 1982 when he recorded 135 tackles with seven sacks and 12 TFLs. The versatile defender also intercepted a pair of passes that season.

That versatility proved to be a major asset for Talley during his successful career in Buffalo. He was an NFL All-Pro pick in 1990 and 1993 and a Pro Bowl selection in 1990 and 1991. Talley is also a member of the Bills’ Wall of Fame.

“I didn’t know that I’d reach the level that I reached, but I was very confident in my skill set and myself,” Talley said. “I knew I could do a lot of different things and did more things on the field than most guys playing my position.

He was previously inducted into the College Football Hall of Fame in 2011.

“My biggest thing was I wanted to win and whatever it took to win, I was willing to do,” Talley said. “If they wanted me to line up and play free safety or defensive end that down, I was going to do it if it was going to give us a chance to win.

“That was basically the mindset of a lot of the guys that were on our team. That’s the way we approached it. We wanted to play, we wanted to win and prove to people that we could play with the big boys in the east.”

Sports
Super Six notebook: Huntington's maturity on display throughout season; Polar Bears' schedule prepared them for postseason
Martinsburg standout Hudson Clement says it was important for the Bulldogs to eliminate Spring Valley during their playoff run.
By Greg Carey
Sports
The Game Within The Game - Episode 102
Brad Howe and Julian Edlow of DraftKings offer up best bets across four different sports.
By MetroNews
Sports
Independence looks to halt Fairmont Senior's long road to the Class AA title
The Patriots and the Polar Bears are meeting in the playoffs for the second consecutive season.
By Joe Brocato
WVU Sports
Three Guys Before The Game - Survive and Advance (Episode 334)
Massive weekend for Mountaineer soccer and volleyball
By MetroNews Staff
View AllHoppy's Commentary