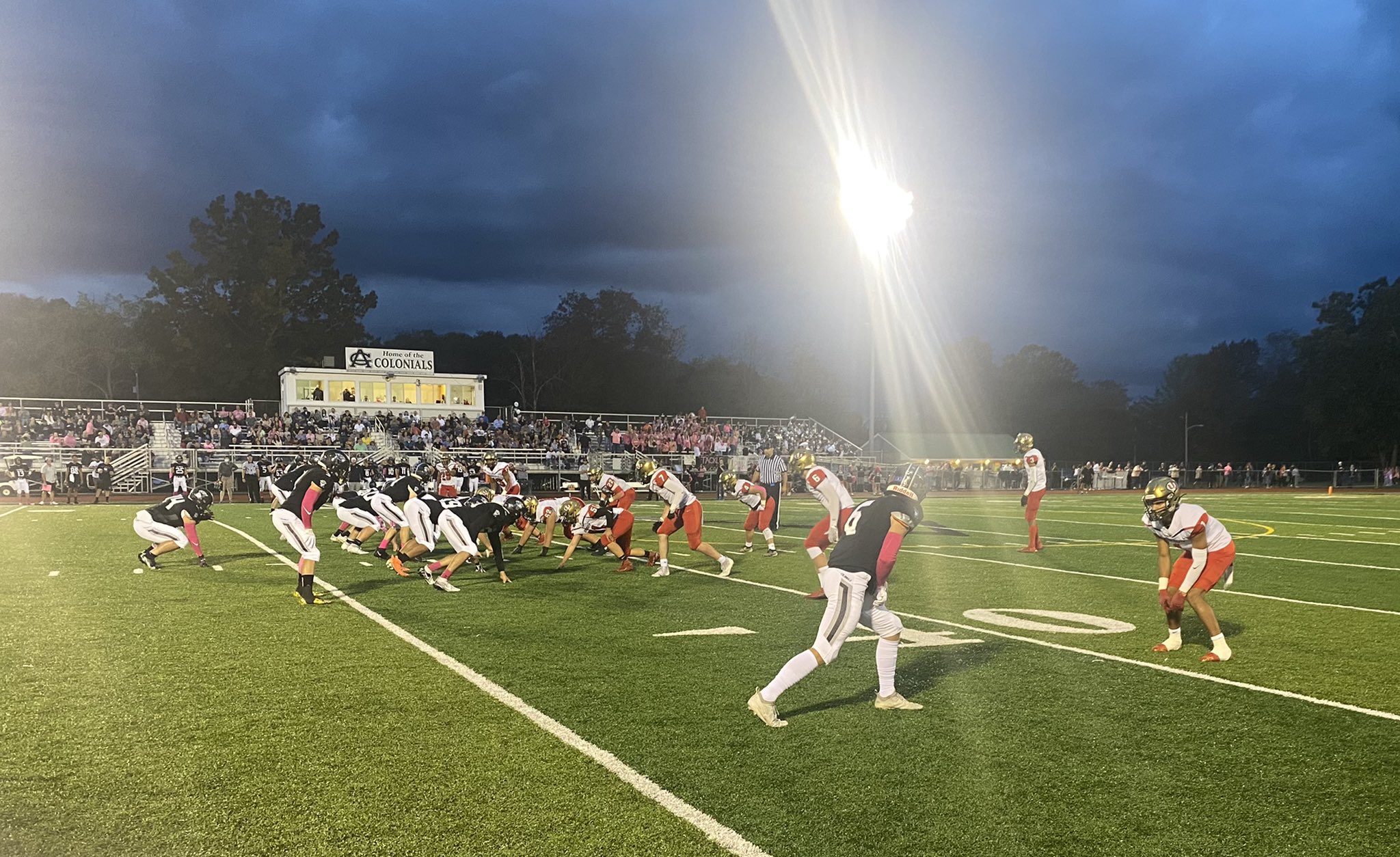 University improved to 6-0 with a win at Albert Gallatin, Pa. (Photo courtesy of University Athletics)

MORGANTOWN, W.Va. — Take a look around the state with recaps from some of the top contests across West Virginia in Week 7.

UNIVERSITY 36, Albert Gallatin, Pa. 14 — No. 5 University scored the final 29 points of the game to collect their sixth win of the season. Colin McBee scored three touchdown runs (5 yards, 5 yards & 3 yards) for the Hawks (6-0).

On the final play of the first half, Chase Edwards hit Sage Clawges on a 21-yard scoring strike to even the score at 14-14. Jaeden Hammack gave the Hawks a 15-point lead in the third quarter on a 19-yard fumble return for a touchdown.

CABELL MIDLAND 14, Capital 0 — Chandler Schmidt and Mason Moran had touchdown runs as the No. 4 Knights (6-1) collected their fourth consecutive victory. The game was halted early due to weather just two minutes prior to halftime.

No. 6 Jefferson joined Huntington at 7-0 with a 33-14 win over James Wood, Va. No. 1 Martinsburg can match that record Saturday when they visit Riverside, Oh.

HERBERT HOOVER 53, Wayne 0 — Top-ranked Herbert Hoover is three wins away from a perfect regular season. The Huskies (7-0) scored 24 points in the first half and 29 more in the second in a shutout win at Wayne.

The Huskies have allowed just 13 points in their last five games.

ROBERT C. BYRD 35, Lincoln 13 — Jeremiah King rushed for 267 yards and became Harrison County’s all-time leading rusher as the No. 9 Flying Eagles improved to 3-2. King scored on touchdown runs of 46, 10 & 41 yards. Nick George tossed a 21-yard touchdown to Aiden Morris. Evan Warne sealed the game with an interception return for a touchdown in the fourth quarter.

Antwan Hilliard scored a pair of six-yard touchdown runs for the No. 8 Cougars (4-1).

POCA 28, Winfield 26 — The No. 2 Dots (5-0) scored 14 points in the fourth quarter to keep pace with Herbert Hoover atop the Cardinal Conference.

Jordan Wolfe scored the last of his two rushing touchdowns to give Poca a 21-20 lead. Minutes later, Malakai Woodard-Jones found the end zone to extend the Poca lead to eight points. Toby Payne opened the scoring for Poca with a seven-yard tote in the first quarter.

Bryson Tate opened the scoring for the Generals (3-3) with a nine-yard touchdown run and Carter Perry pulled in a 46-yard touchdown reception to give Winfield a 13-7 lead. Perry scored on a 23-yard run with 36 seconds left. The two-point conversion attempt to tie the game was unsuccessful.

FINAL: Poca 28, Winfield 26. Fans that stuck around after the lengthy lightning delay were treated to a classic.

Generals 2-point conversion falls short with 0:36 left. The attempt was set up by a miraculous 23 yard TD run on 4th and goal. #wvprepfb @MetroNewsPrep pic.twitter.com/sKzao95aUs

MOOREFIELD 22, Northern Garrett, Md. 13 — The Yellow Jackets (5-1) jumped out to a 16-0 lead and held on to defeat a Northern team that owns wins over Frankfort and Keyser. Coleman Mongold opened and closed the scoring in the game with a 23-yard touchdown reception and an 82-yard kickoff return. Blake Funk gave the Jackets a 16-0 lead with a 14-yard touchdown run in the third quarter.

Moorefield will visit No. 2 East Hardy in the annual Hardy Bowl next week. The Cougars (6-0) defeated Bath County, Va. 53-12.

JAMES MONROE 20, Greenbrier West 14 — The Mavericks (4-1) prevailed over the Cavaliers (4-2) in the MetroNews Class A Game of the Week. James Monroe scored the final 13 points in the contest. Cooper Ridgeway had a touchdown pass and a touchdown run in the third quarter. Braydie Carr had an 85-yard kickoff return for a touchdown for the Mavericks.

Ty Nickell and Cole Vandall had touchdown runs for West.

A pair of games were postponed due to weather. The Parkersburg at No. 8 South Charleston game has been postponed to Saturday at 1 p.m. The Clay County-Nitro game was postponed.