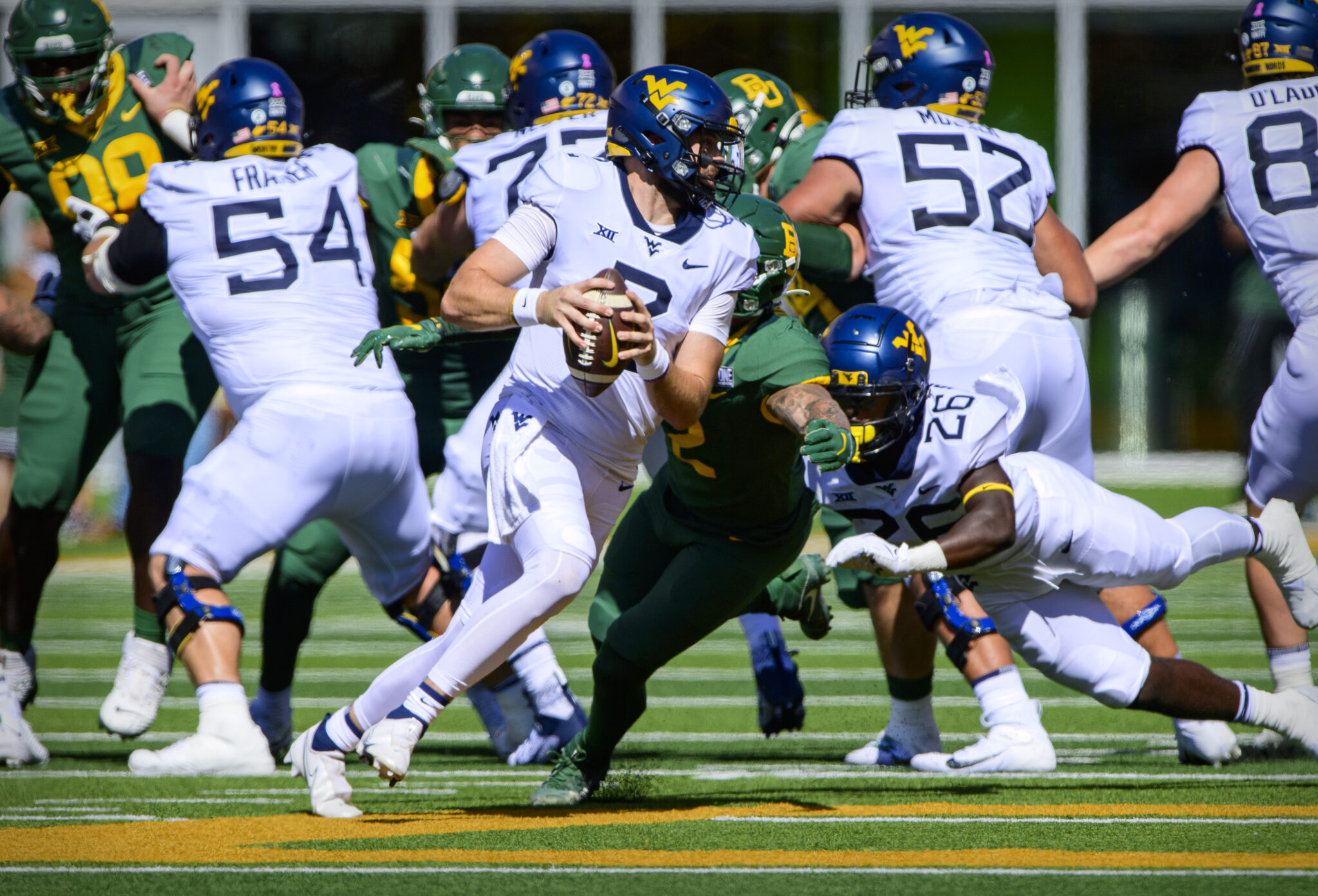 West Virginia quarterback Jarret Doege (2) runs with the ball against the Baylor Bears during the first half at McLane Stadium. Mandatory Credit: Jerome Miron-USA TODAY Sports

West Virginia and Baylor meet for the 10th time in a noon affair on Fox Sports 1 at McLane Stadium. The Mountaineers (2-3) have lost each of their first two games in Big 12 Conference play and could go a long way toward keeping legitimate bowl aspirations alive by ending a six-game road losing streak that dates back to the start of last season.

Baylor enters off its first loss of the season at Oklahoma State, which dropped the Bears to 4-1. BU beat Iowa State and needs this win to avoid falling below the .500 mark in league play. Bears’ head coach Dave Aranda is in his second season and looking for his first win over the Neal Brown-led Mountaineers, who claimed a 27-21 double overtime victory in Morgantown last season.

2:35 p.m. — Abram Smith untouched to the end zone on a 31-yard run and the Bears continue to pour it on. Bohanon has thrown for 328 yards and four touchdowns, while completing 16-of-23 passes. The Mountaineers have been largely competitive in each of their three losses, but this one has gotten away. BAYLOR 42, West Virginia 13, 4:37 3rd qtr

2:22 p.m. — West Virginia continues to struggle in pass coverage and Bohanon finds an open Sims for a 29-yard touchdown. The Bears had an offensive holding waved off on second down, then benefited from a third down hold the play before the score. BAYLOR 35, West Virginia 13, 8:43 3rd qtr

2:15 p.m. — West Virginia tries an onside kick and had a chance to recover it, but Estrada does instead, allowing the Bears to start their first second-half series across midfield.

2:10 p.m. — Another trip to the red zone for the Mountaineers ends with a 27-yard field goal from Legg. West Virginia overcame three separate penalties (personal foul on the kickoff, illegal formation and holding) to move the ball deep into Baylor territory, but stalled again. BAYLOR 28, West Virginia 13, 9:27 3rd qtr

1:21 p.m. — The Mountaineers reach the red zone but have to settle for a field goal from Casey Legg, who splits the uprights from 29 yards. Legg is now 9-for-9 on field goals, but the Mountaineers continue to trail by three possessions. BAYLOR 28, West Virginia 10, 6:17 2nd qtr

1:12 p.m. — Bohanon and Thornton connect on a second touchdown pass, this one from 11 yards to give Baylor a three-touchdown lead. Thornton didn’t appear to maintain possession all the way through, but it was ruled a catch nonetheless. Bohanon has 262 passing yards on 10 completions and found Drew Estrada for 58 yards earlier on the drive as the Bears continue to move the ball easily. BAYLOR 28, West Virginia 7, 9:52 2nd qtr

Another one for @BUFootball 💪

They are rolling in the first half pic.twitter.com/mx84jTEhGc

1:05 p.m. — Garrett Greene quarterbacks the Mountaineers’ first series of the second quarter. After Greene’s 19-yard run, the Mountaineers stall and are forced to punt for a second time. Leading by two touchdowns, Baylor starts at its 14-yard line.

Gerry Bohanon is doing it all 🔥

He tacks on another TD for @BUFootball pic.twitter.com/J7v6TxAvb8

12:24 p.m. — Bohanon tosses a 10-yard touchdown pass to Ben Sims and Baylor has scored TDs on both of its drives. The Mountaineers had a chance for a three-and-out, but jumped offside, and the Bears elected to go for it on fourth-and-1 from their 34-yard line. Bohanon’s 44-yard pass to Thornton helped set up BU’s second score. BAYLOR 14, West Virginia 7, 9:22 1st qtr

12:14 p.m. — The Mountaineers get even when Sean Ryan hauls in a 12-yard touchdown pass from Jarret Doege. Doege connected with Sam James for 53 yards two plays before the score. West Virginia used its first timeout before its first play. BAYLOR 7, WEST VIRGINIA 7, 12:41 1st qtr

We’re off to a hot start in Waco ⚡️ pic.twitter.com/2XA2cT8MiH

12:07 p.m. — Gerry Bohanon finds Tyquan Thornton for a 75-yard touchdown pass on the second play from scrimmage. Bohanon got between Nicktroy Fortune and Josh Chandler-Semedo on a slant and did most of his work after the catch. BAYLOR 7, West Virginia 0, 14:19 1st qtr

75 YARDS TO THE 🏠@Humble_Ty19 gets @BUFootball off to a fast start 🔥 pic.twitter.com/l07KZs3QPY

11:25 a.m. — West Virginia spear safety Scottie Young is out today and did not make the trip. Jackie Matthews will start in place of Young. Reserve safety Kerry Martin also did not travel to Waco. True freshman wide receiver Kaden Prather is expected to see a significant increase in playing time against the Bears. Prather was one of the more heralded recruits in this year’s class. His only two receptions to this point came in a lopsided win over Long Island for a total of 33 yards.

Setting the scene from Waco

Brown struggling to win, but those before him inherited more in way of NFL talent