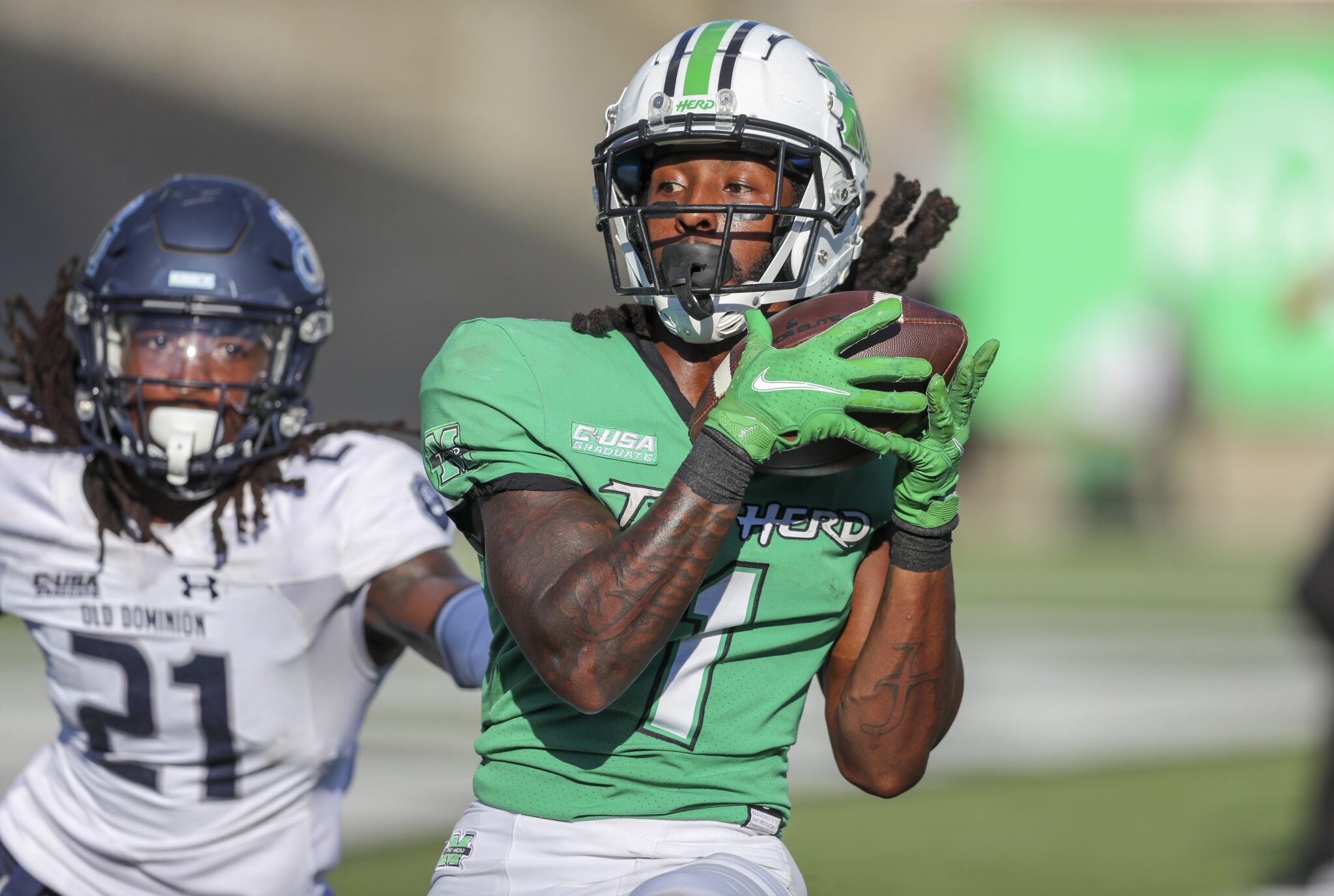 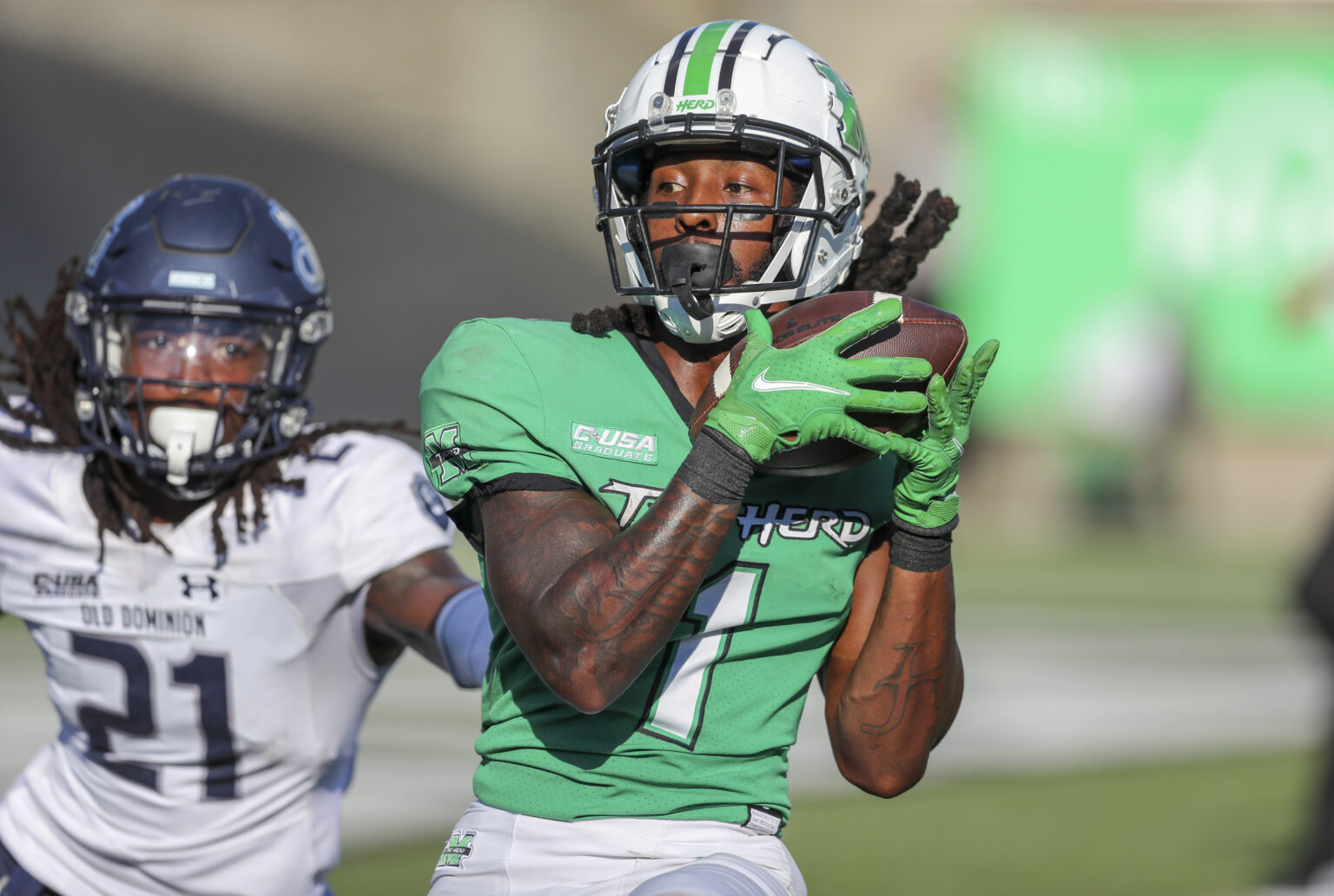 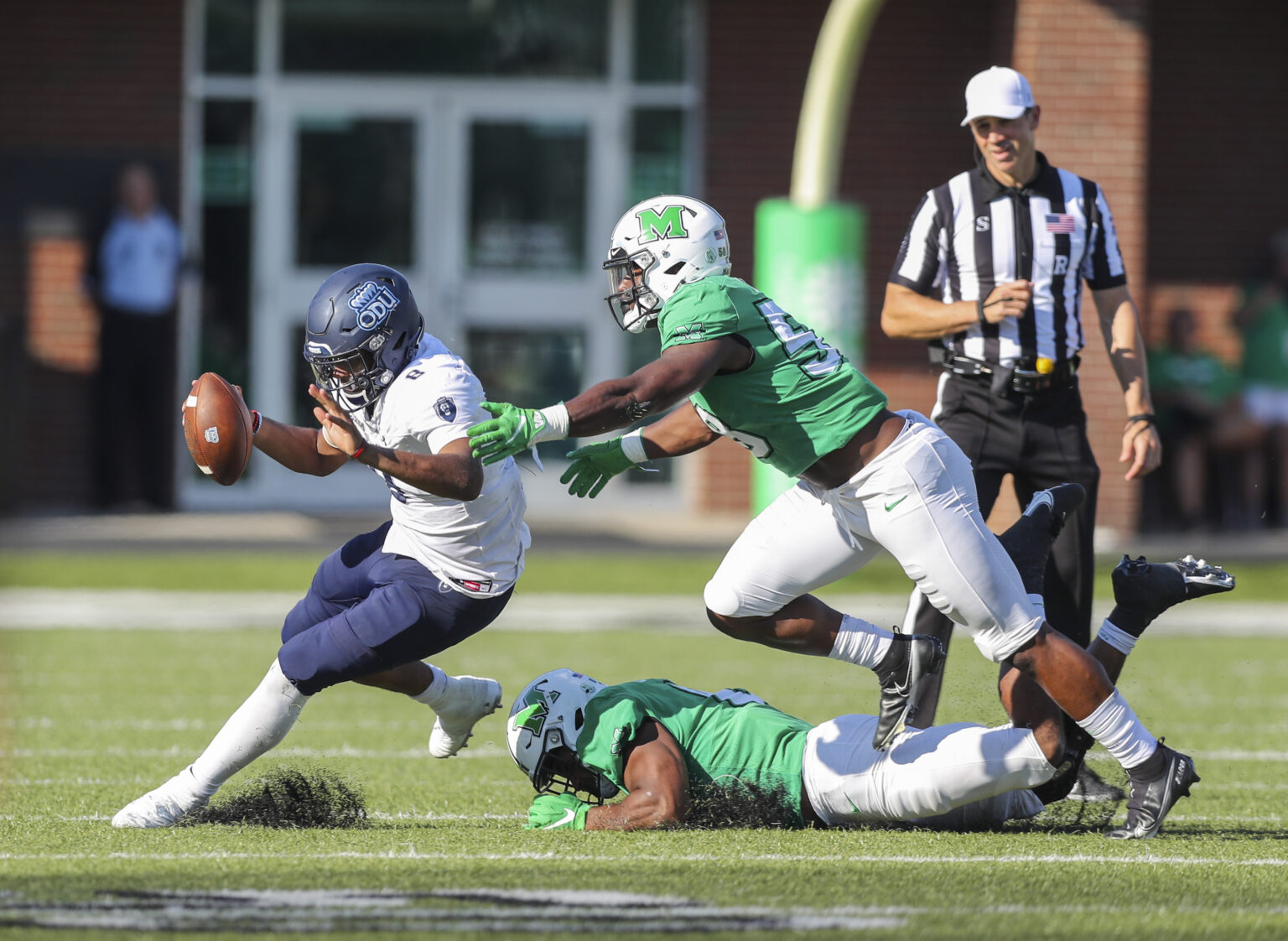 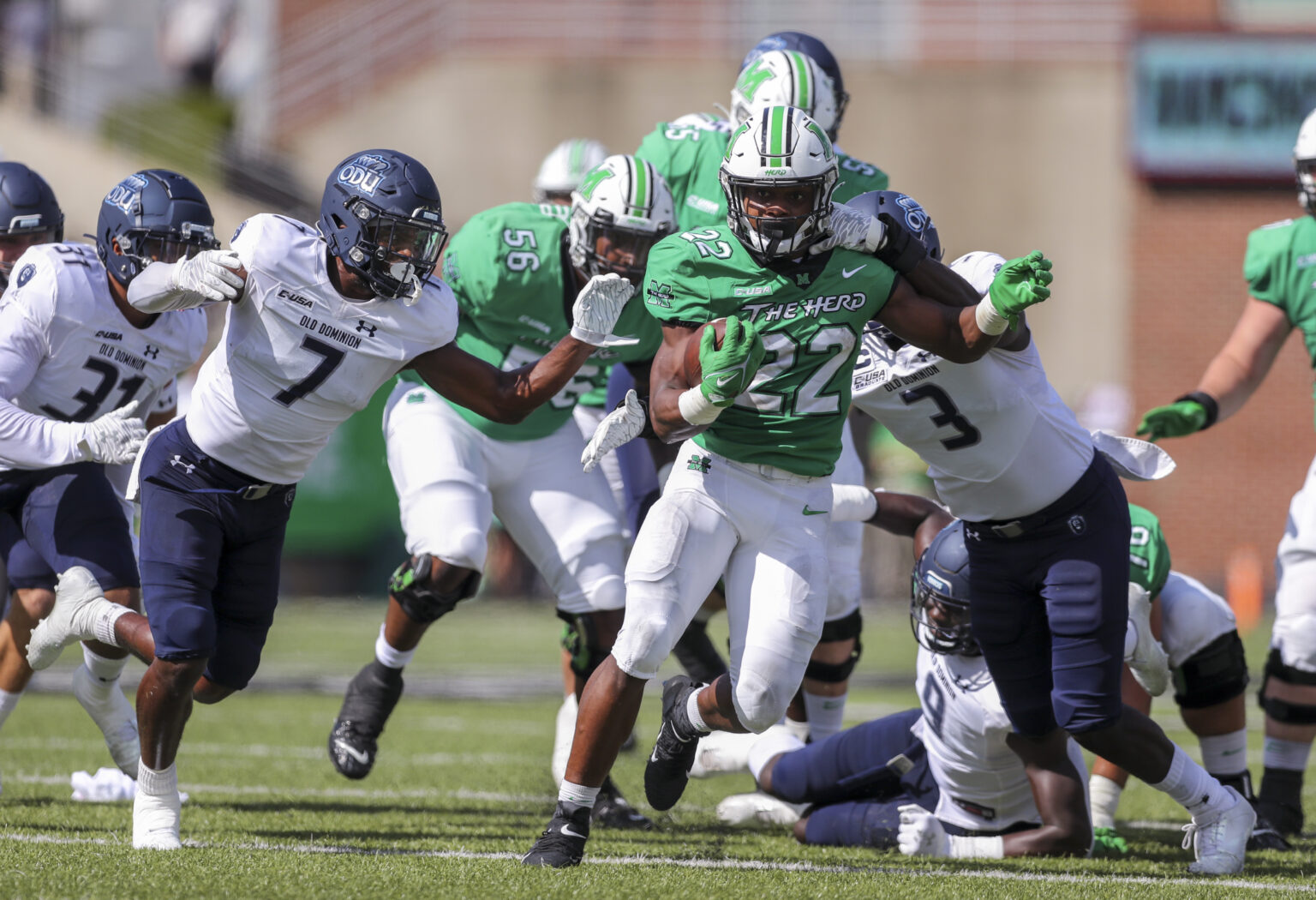 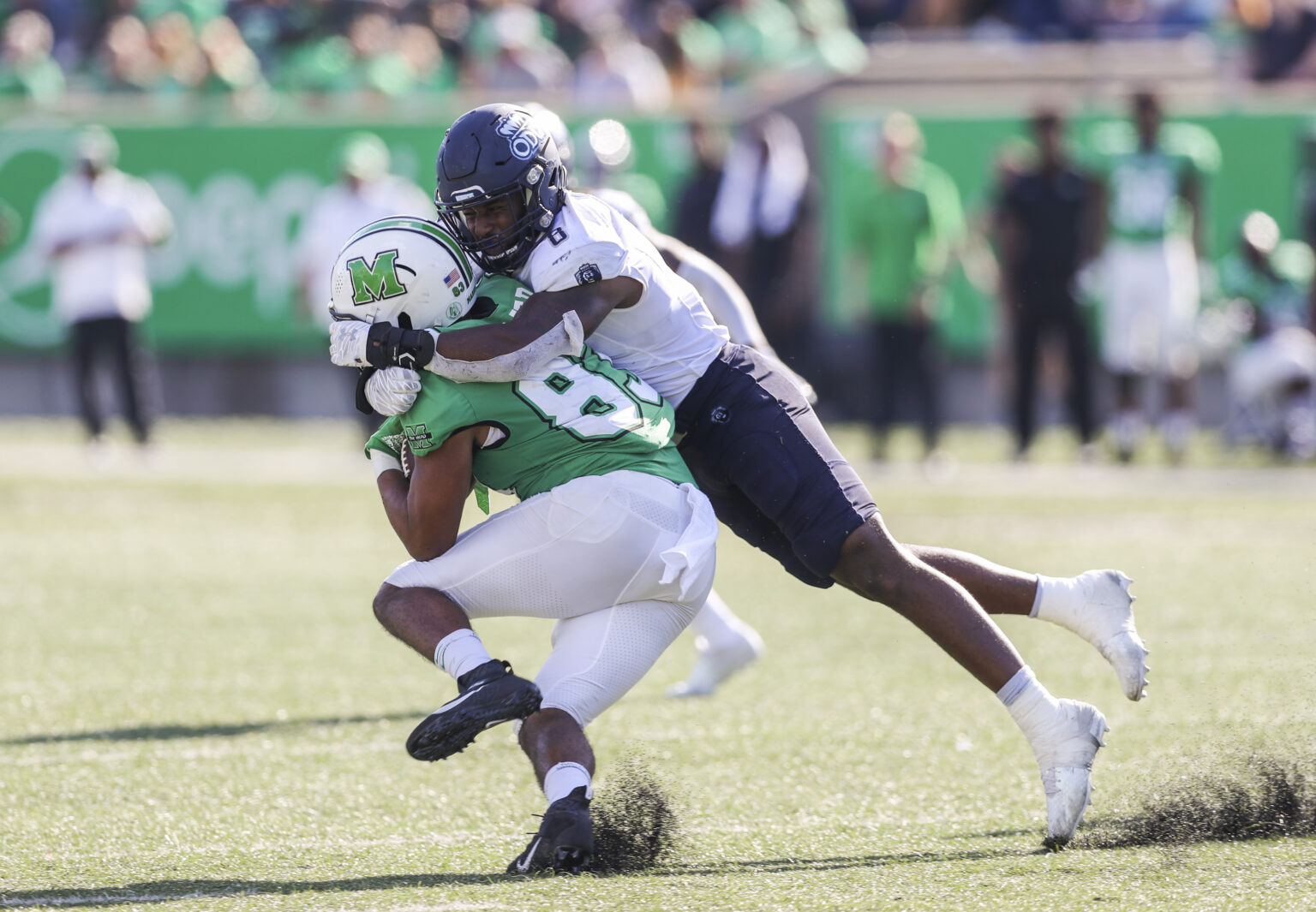 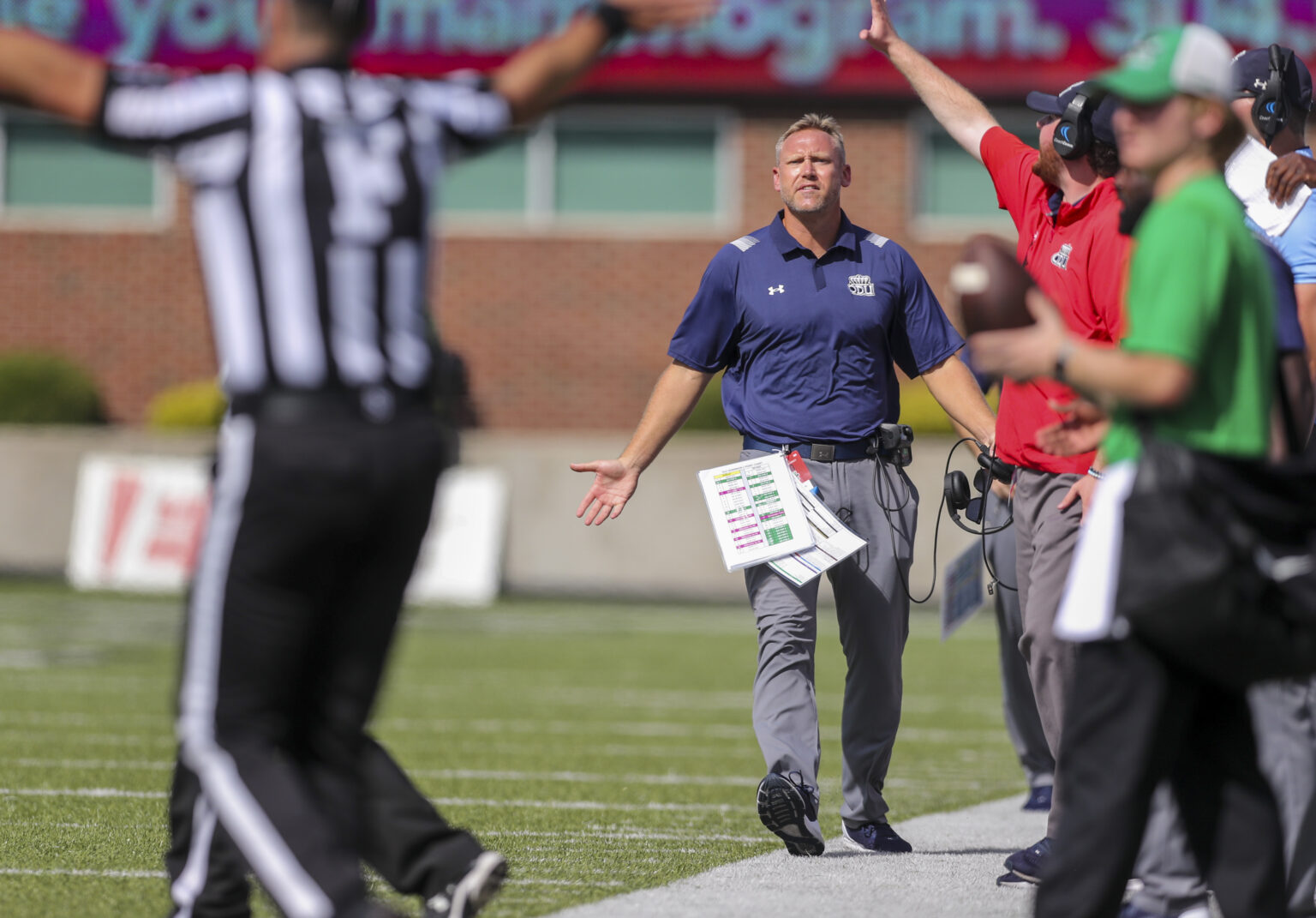 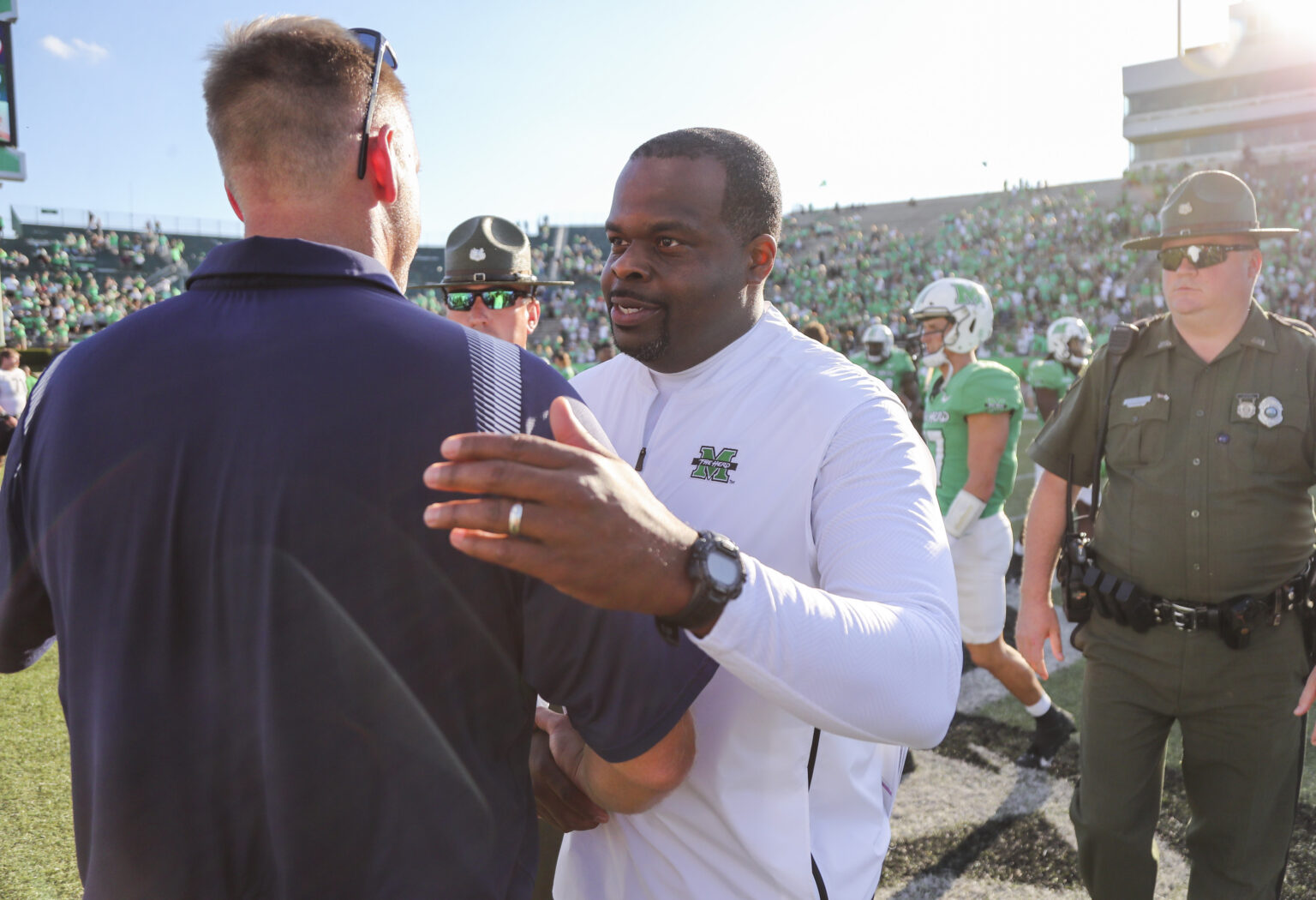 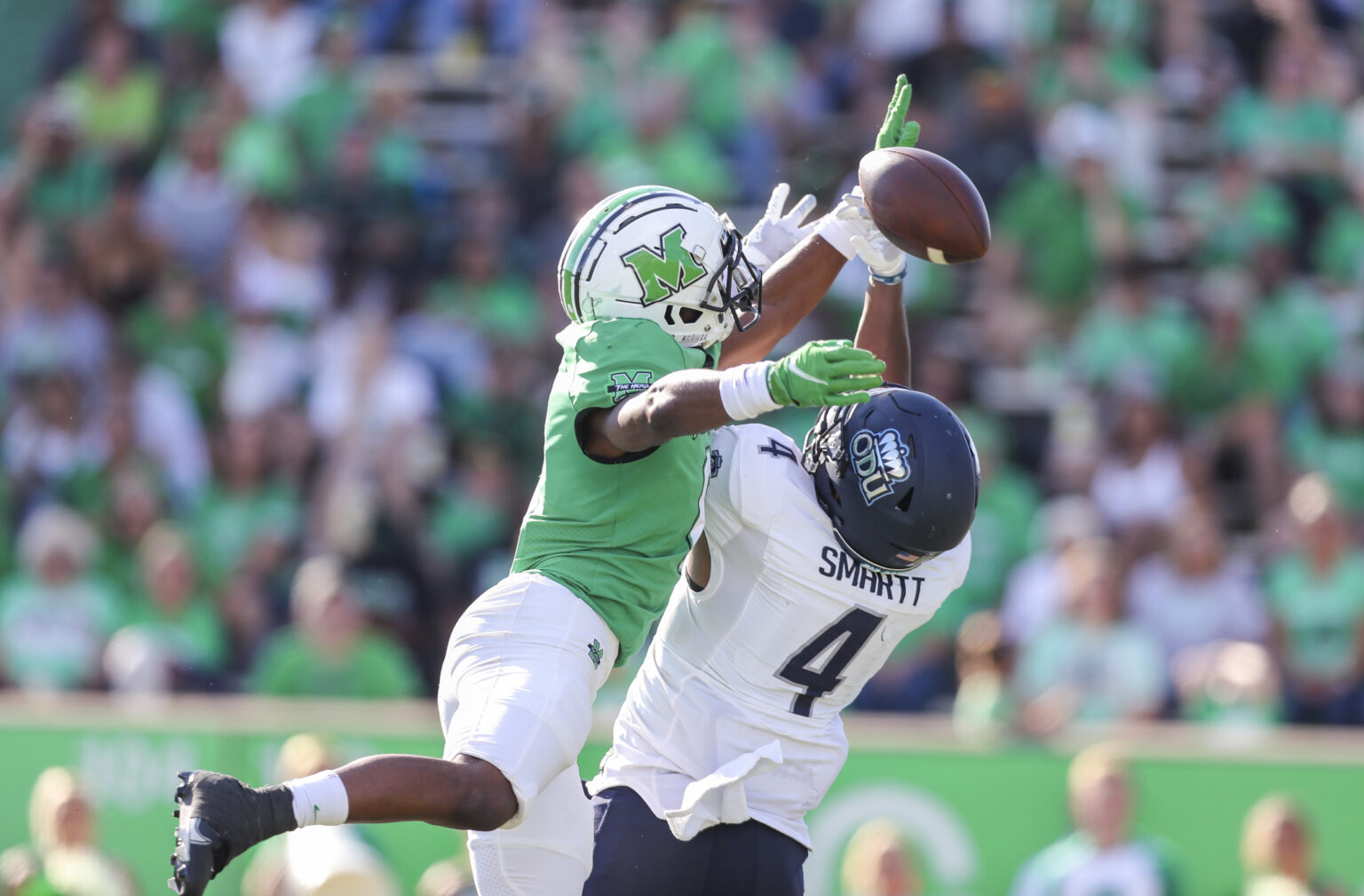 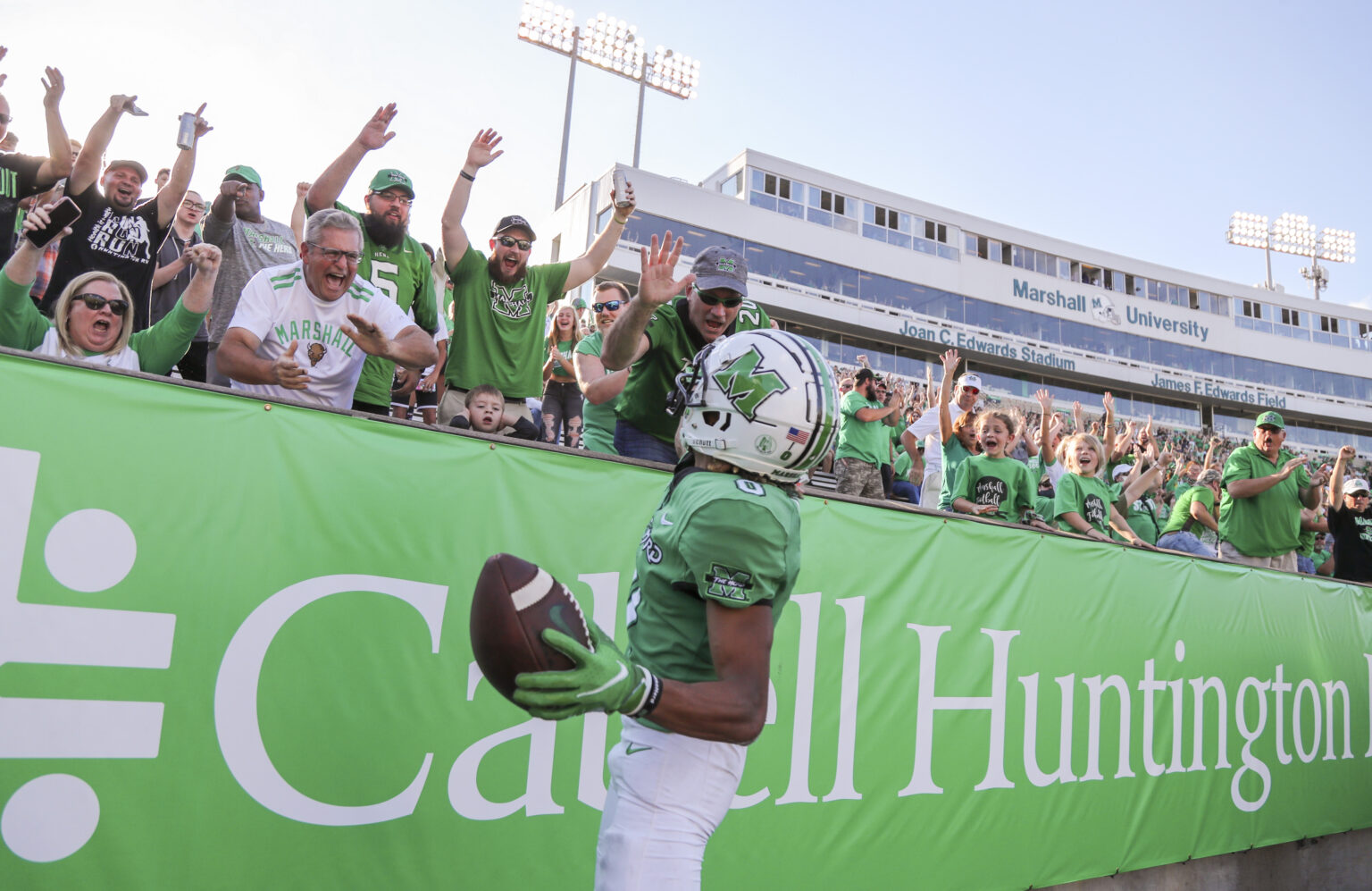 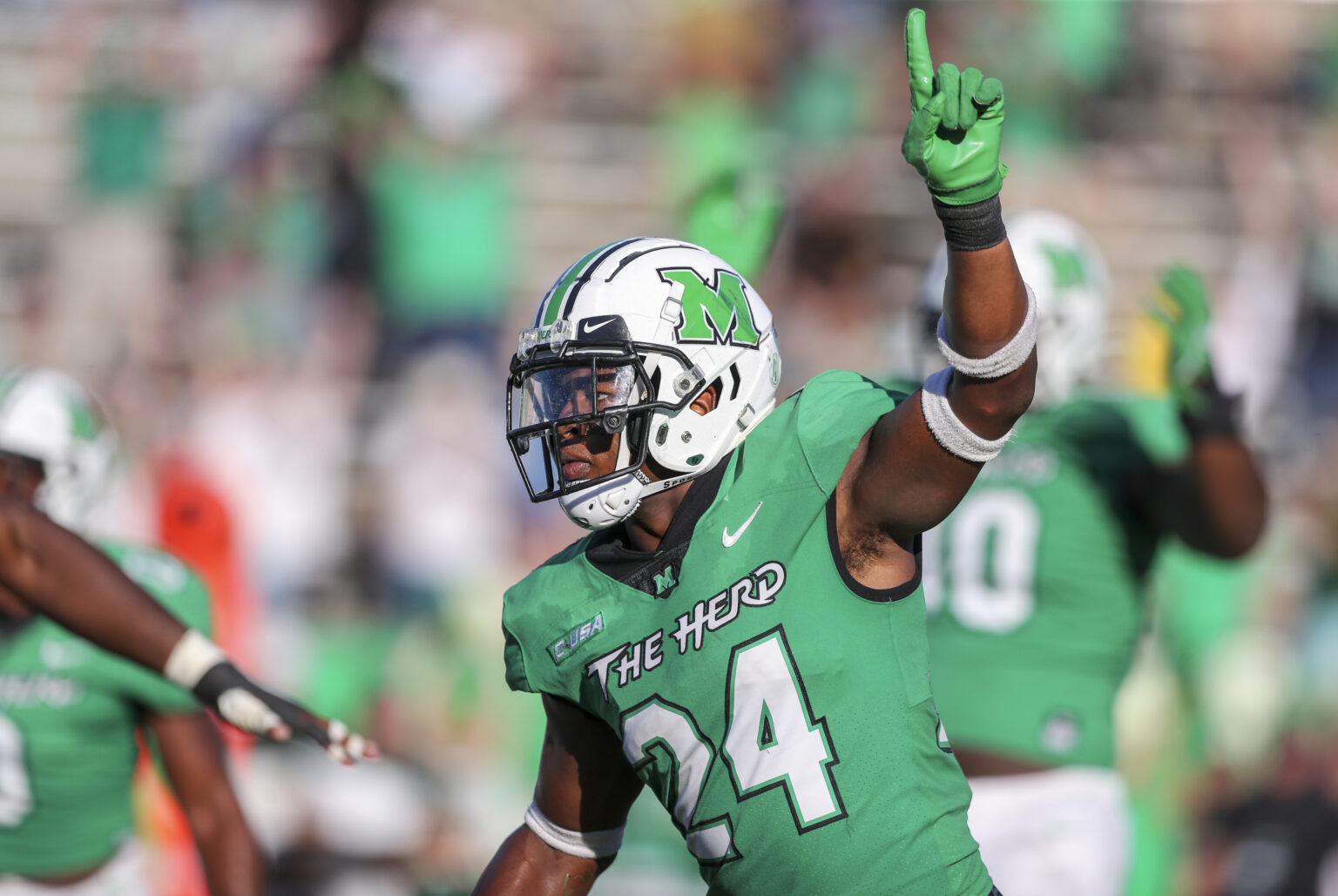 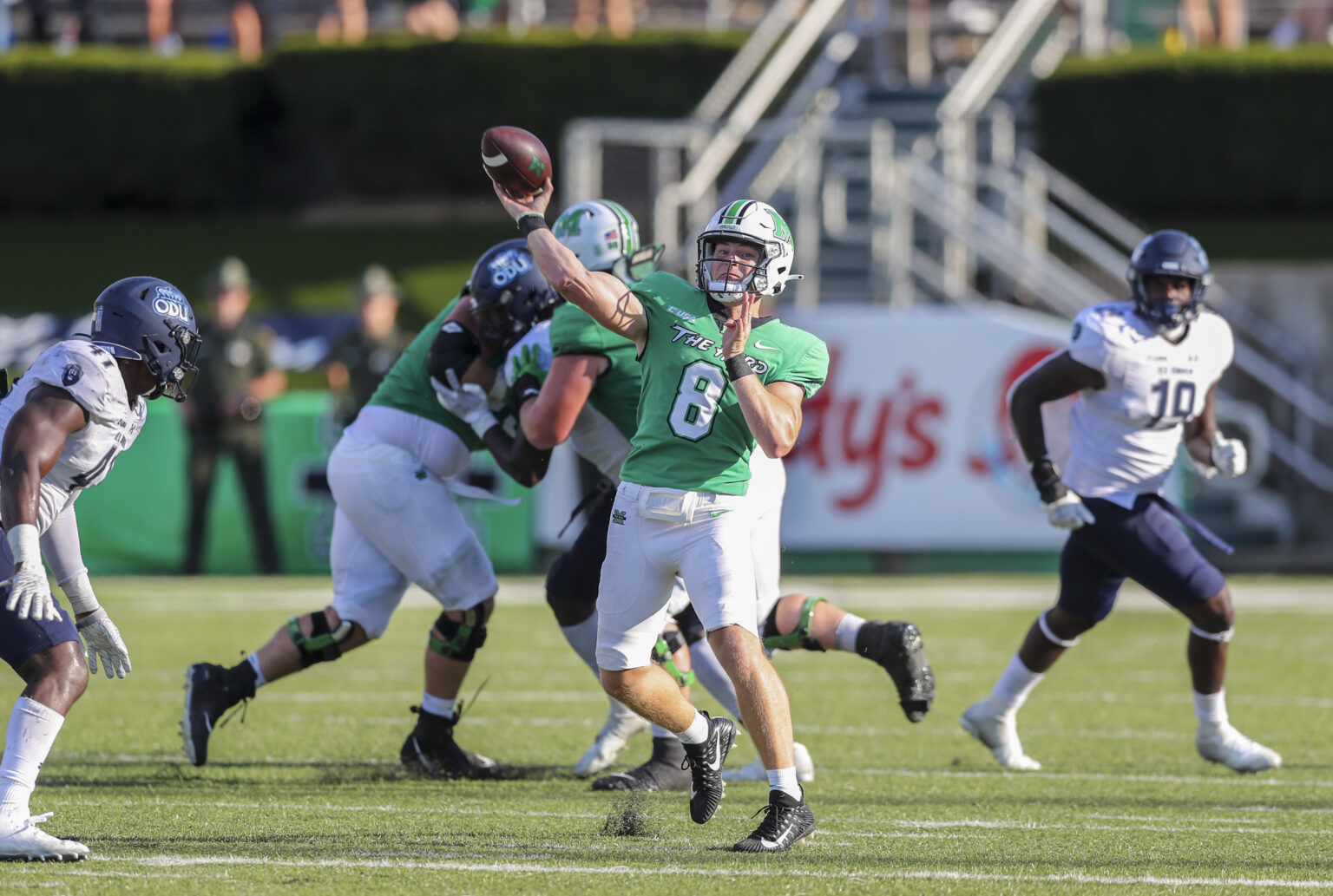 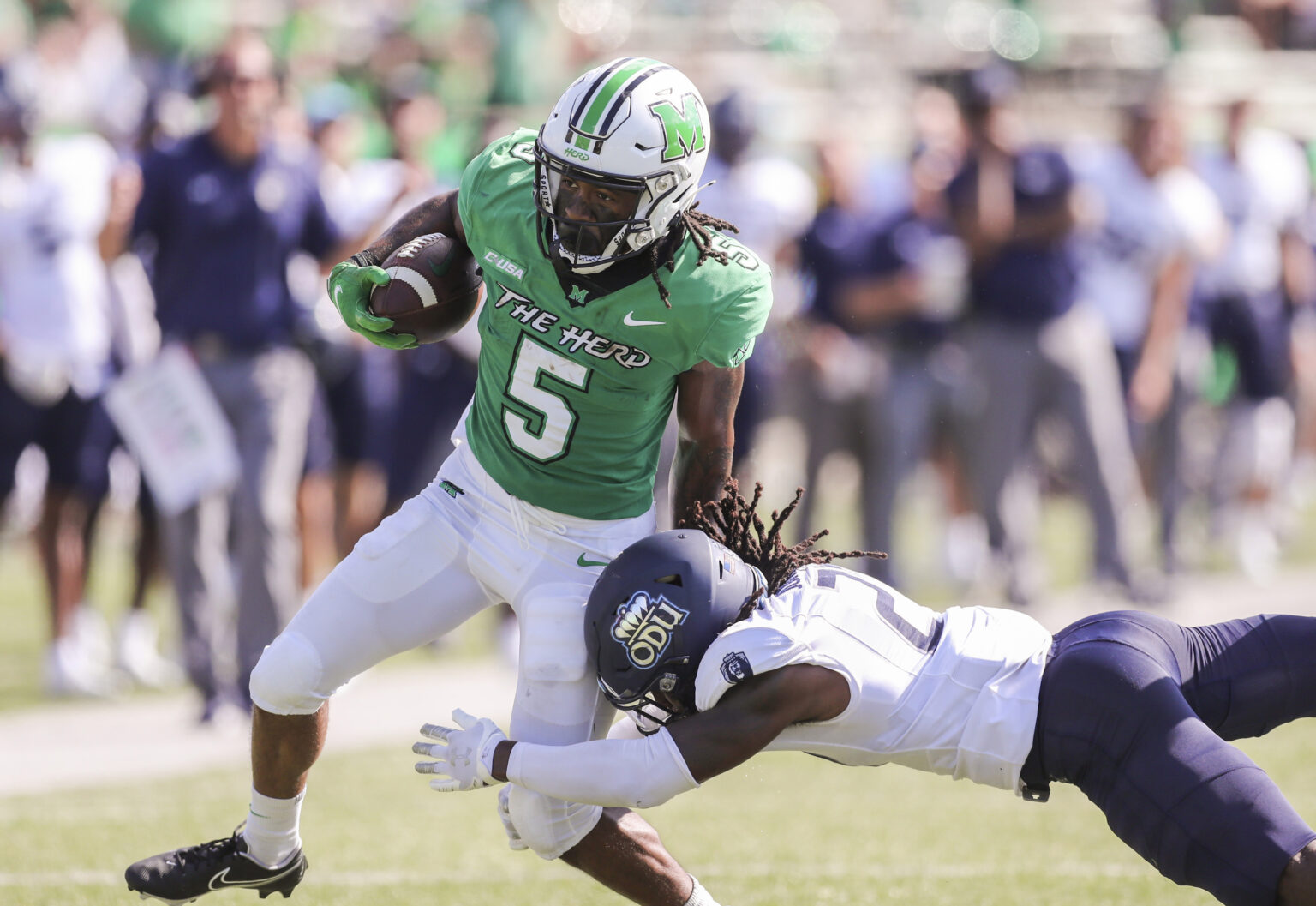 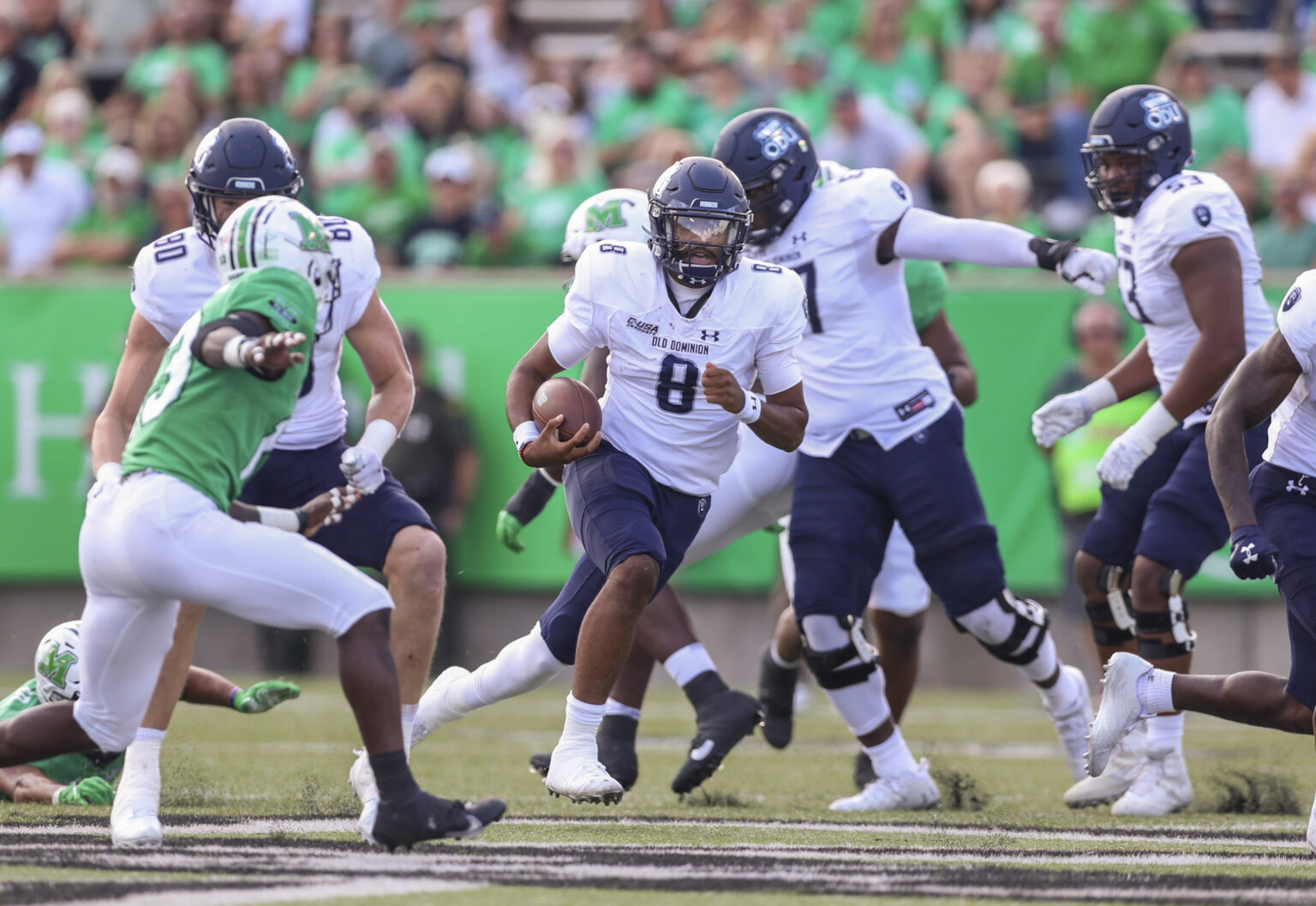 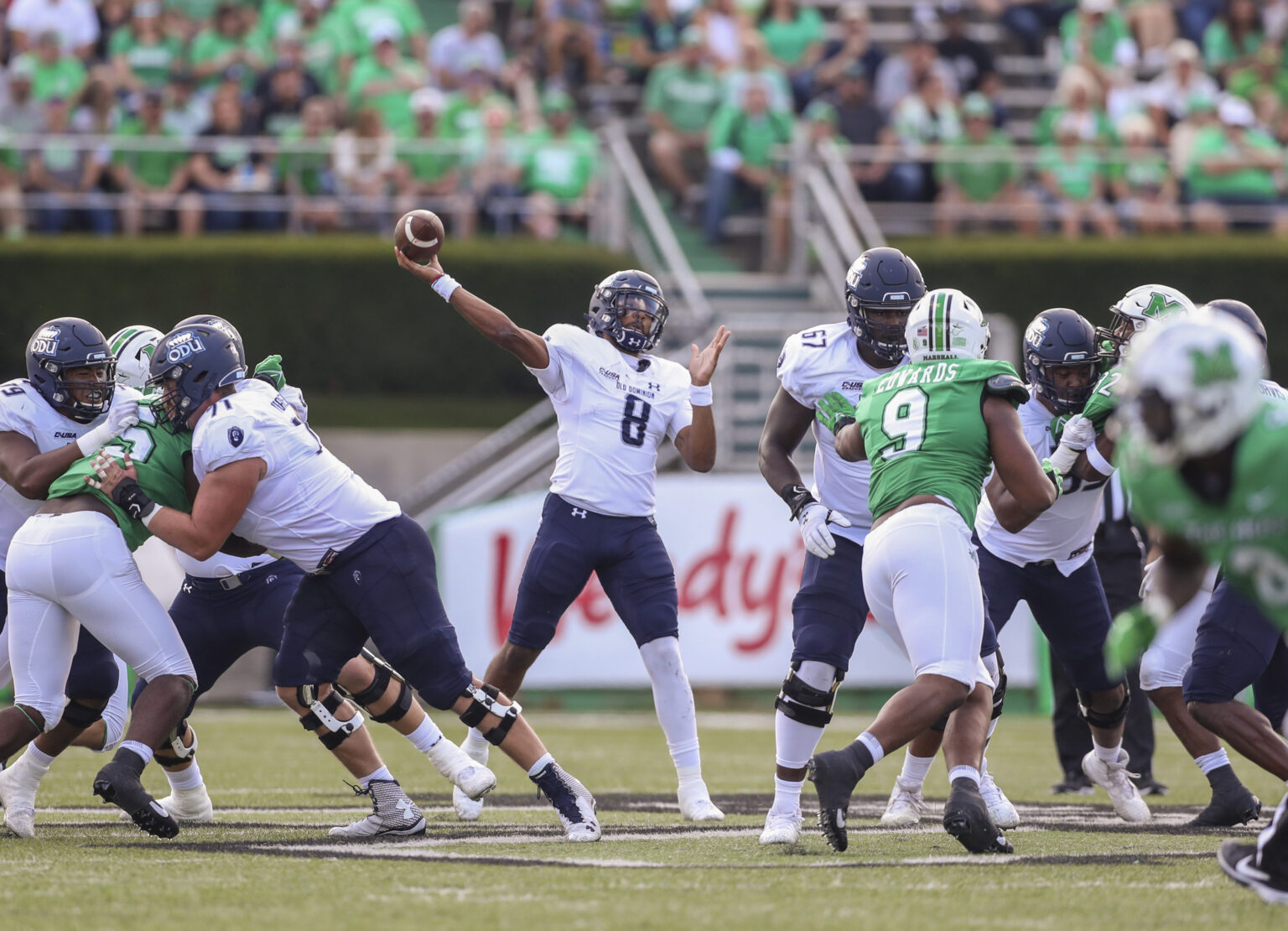 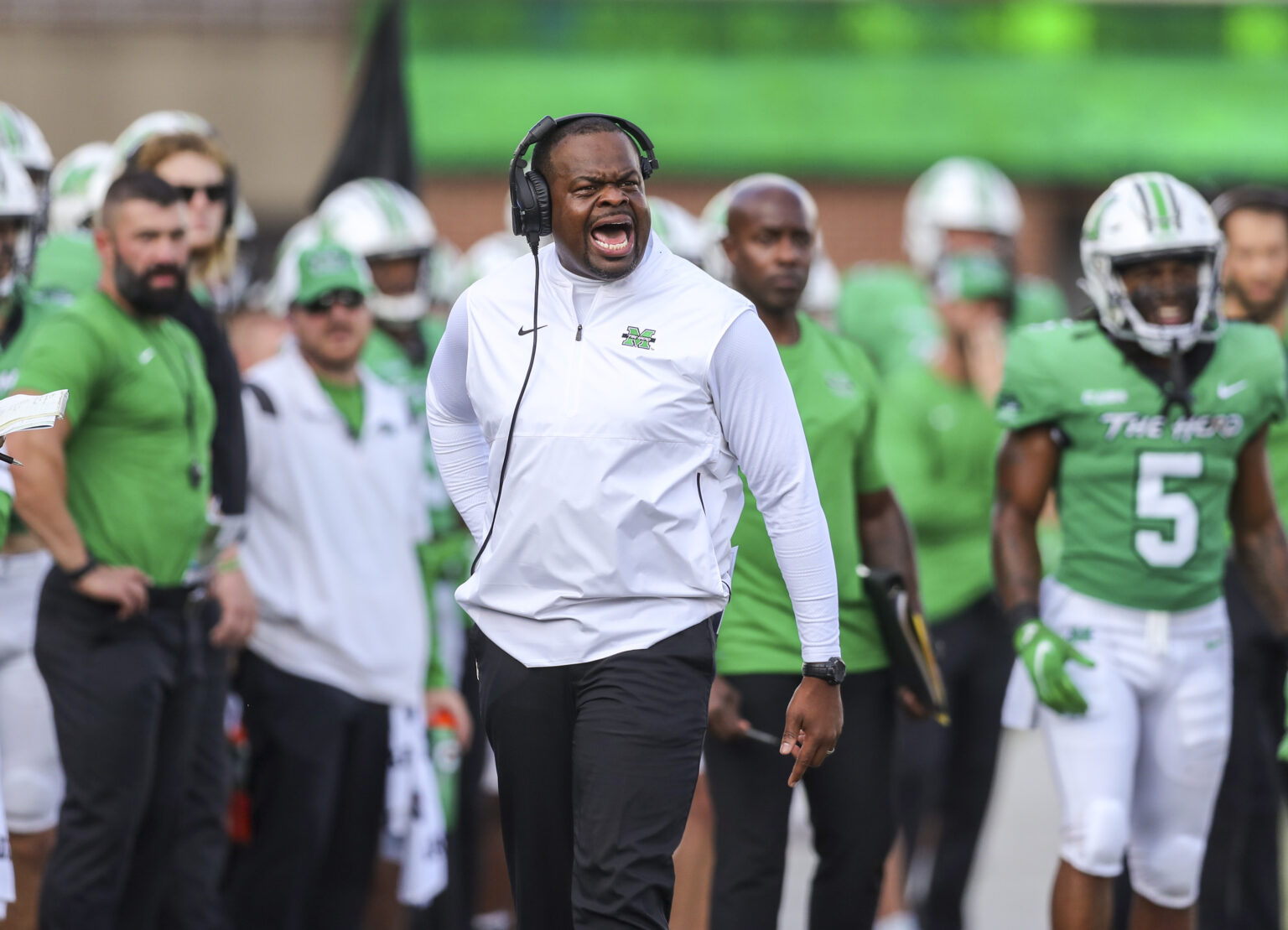 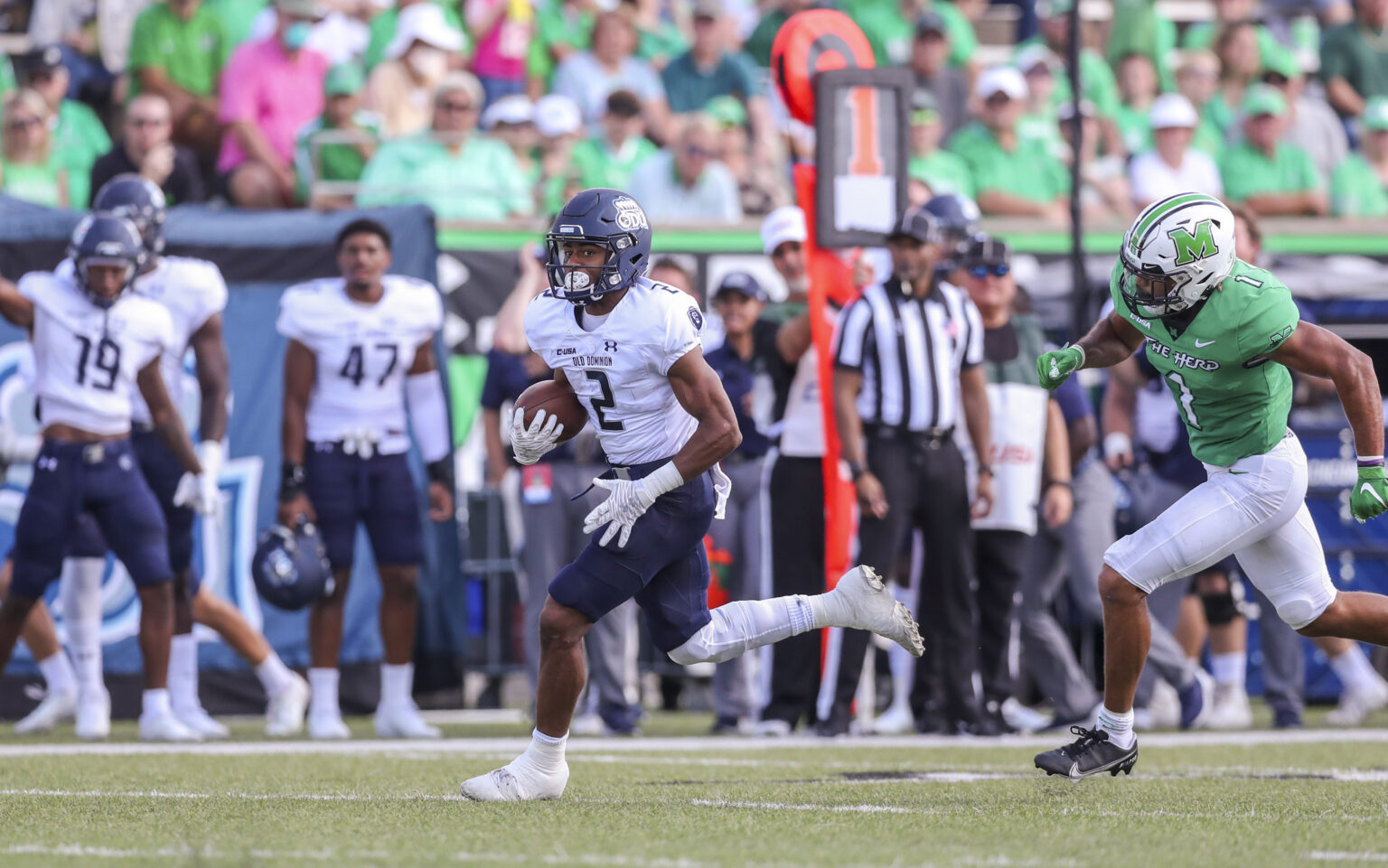 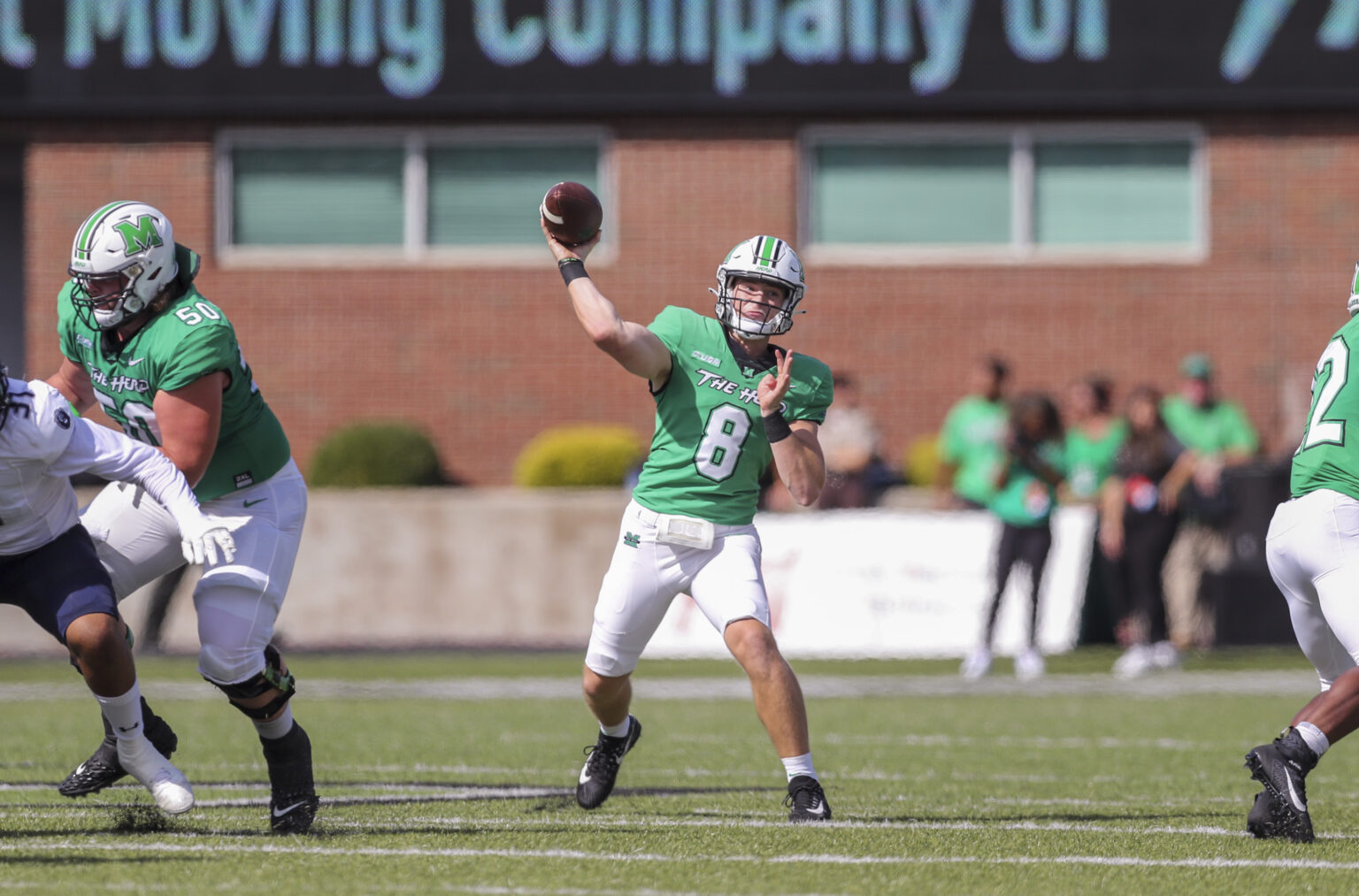 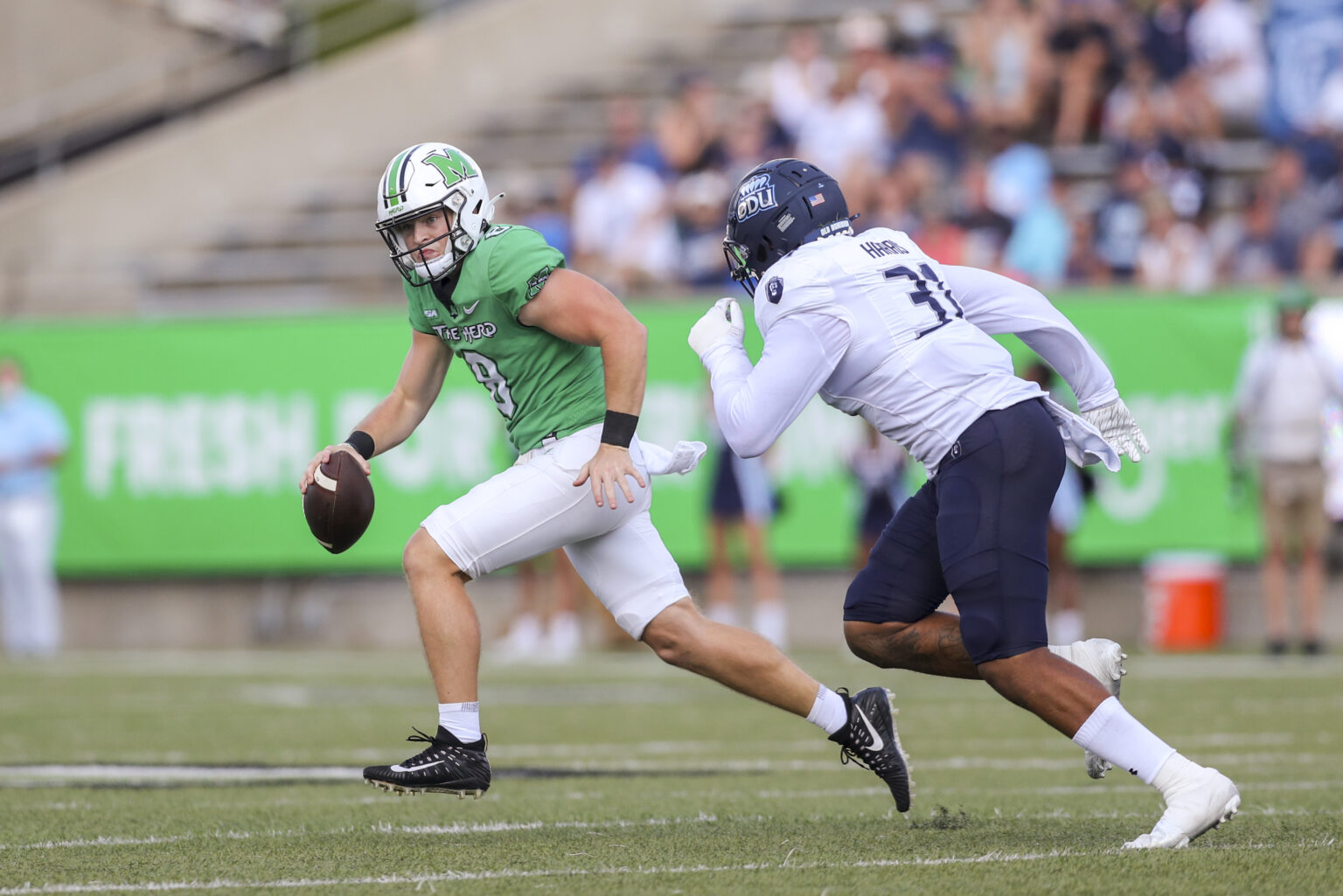 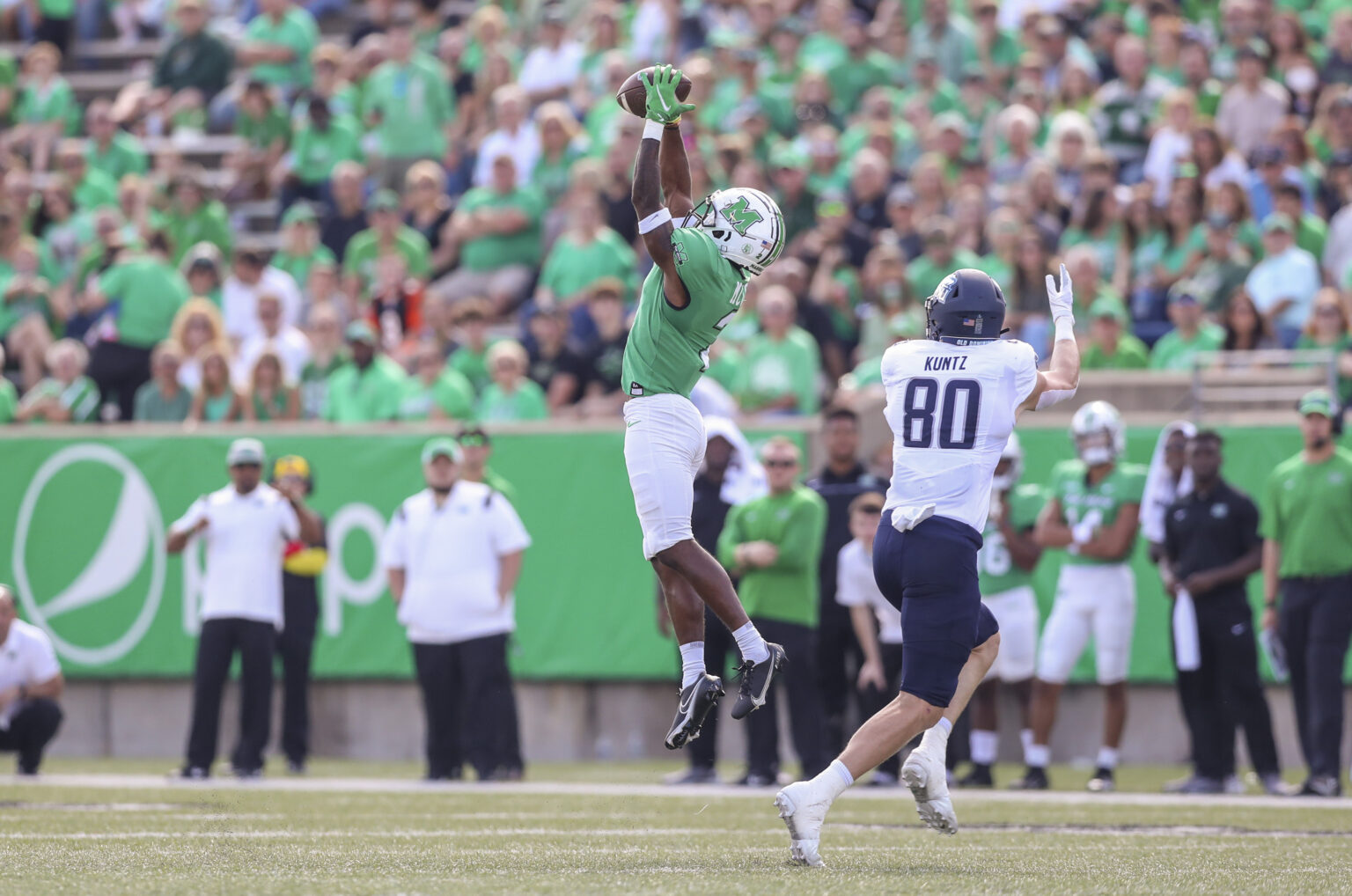 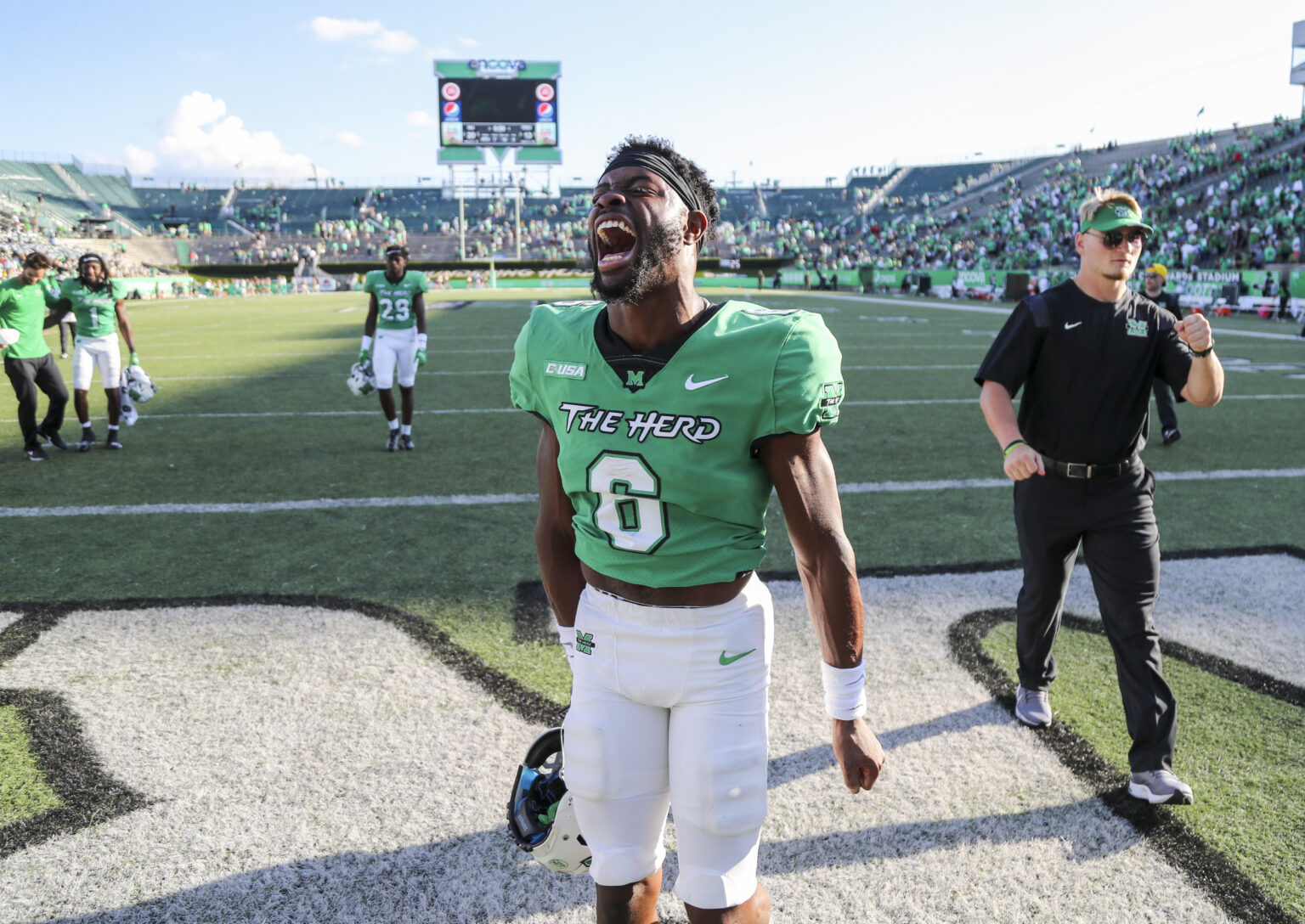 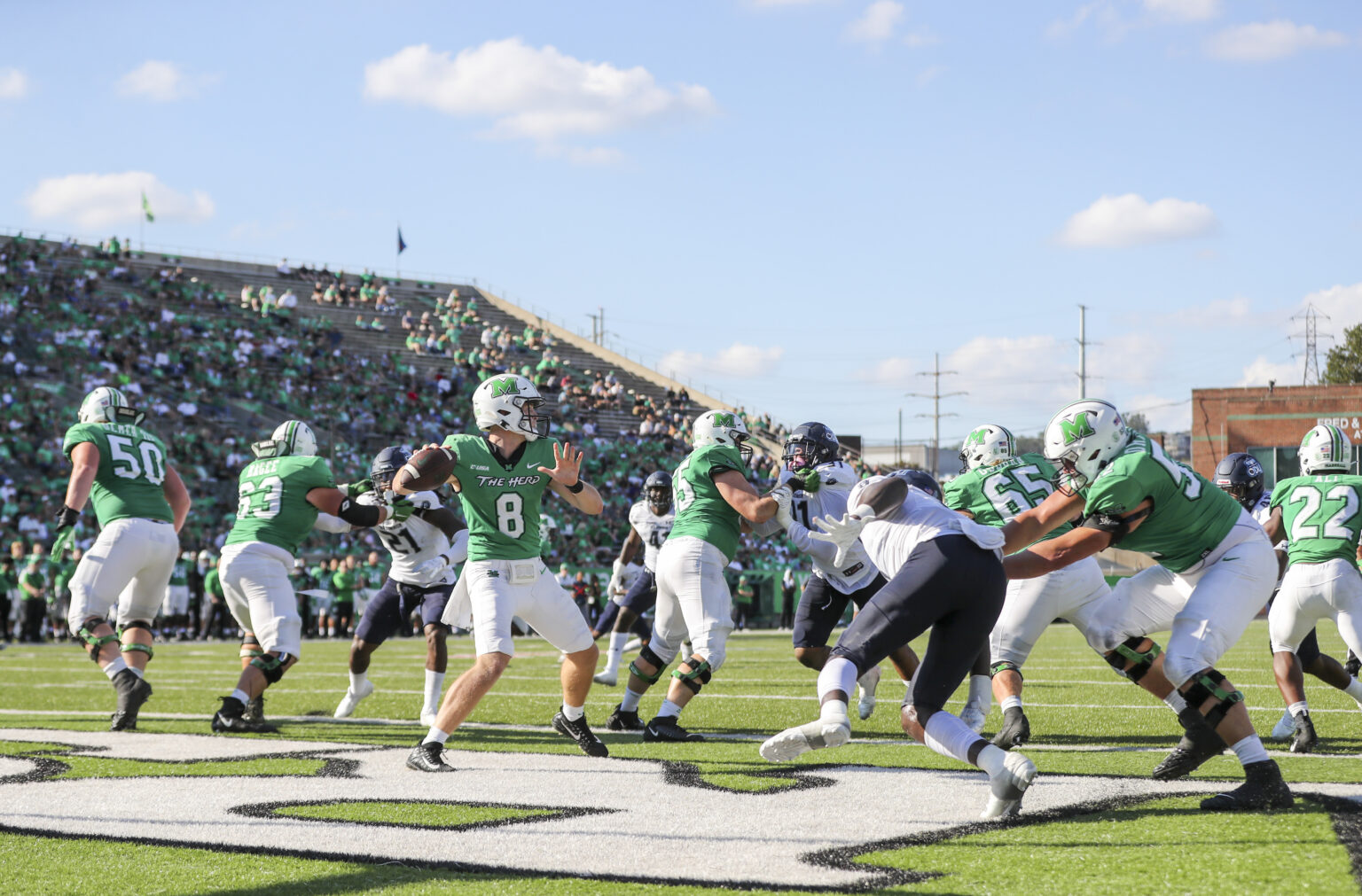 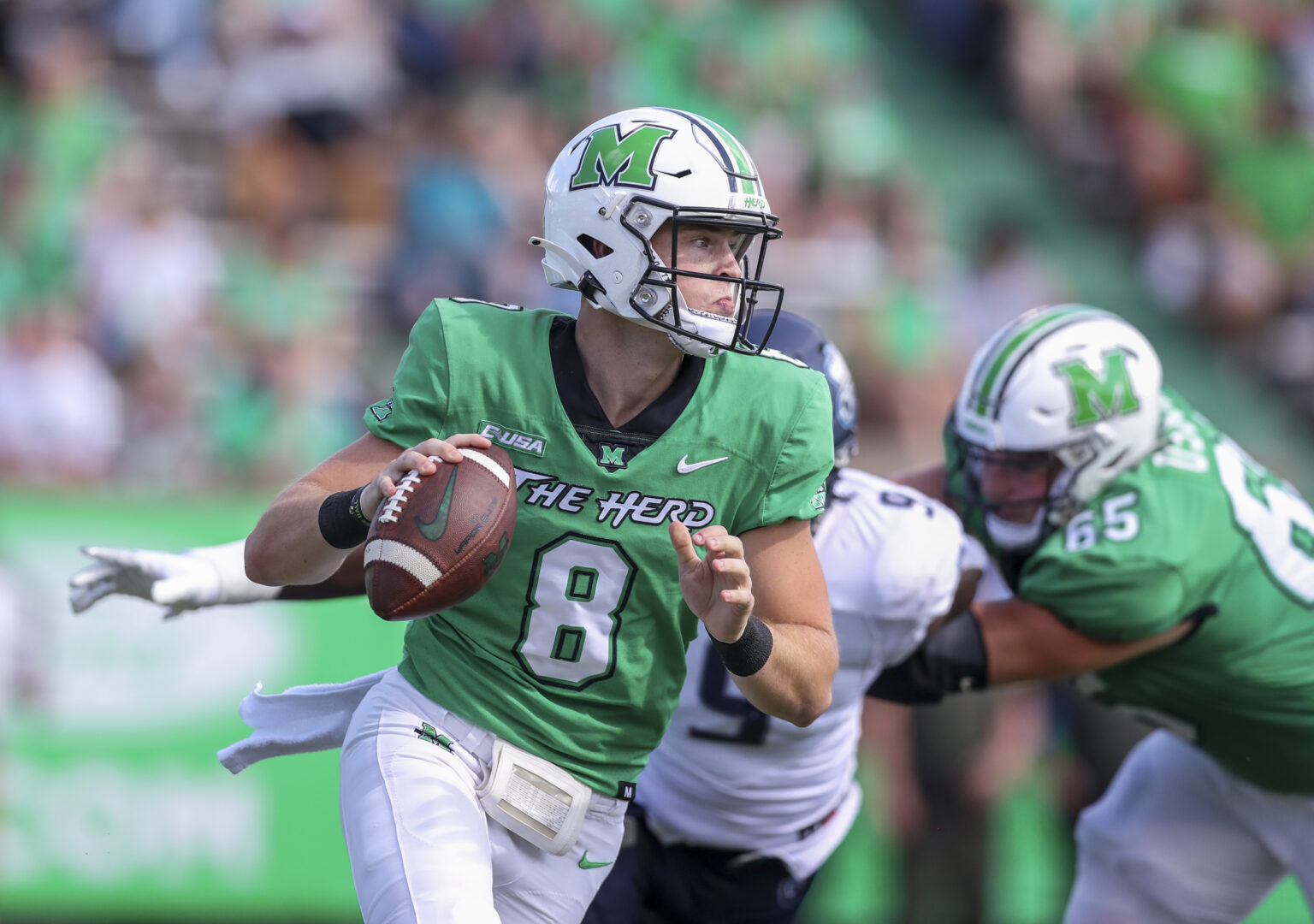 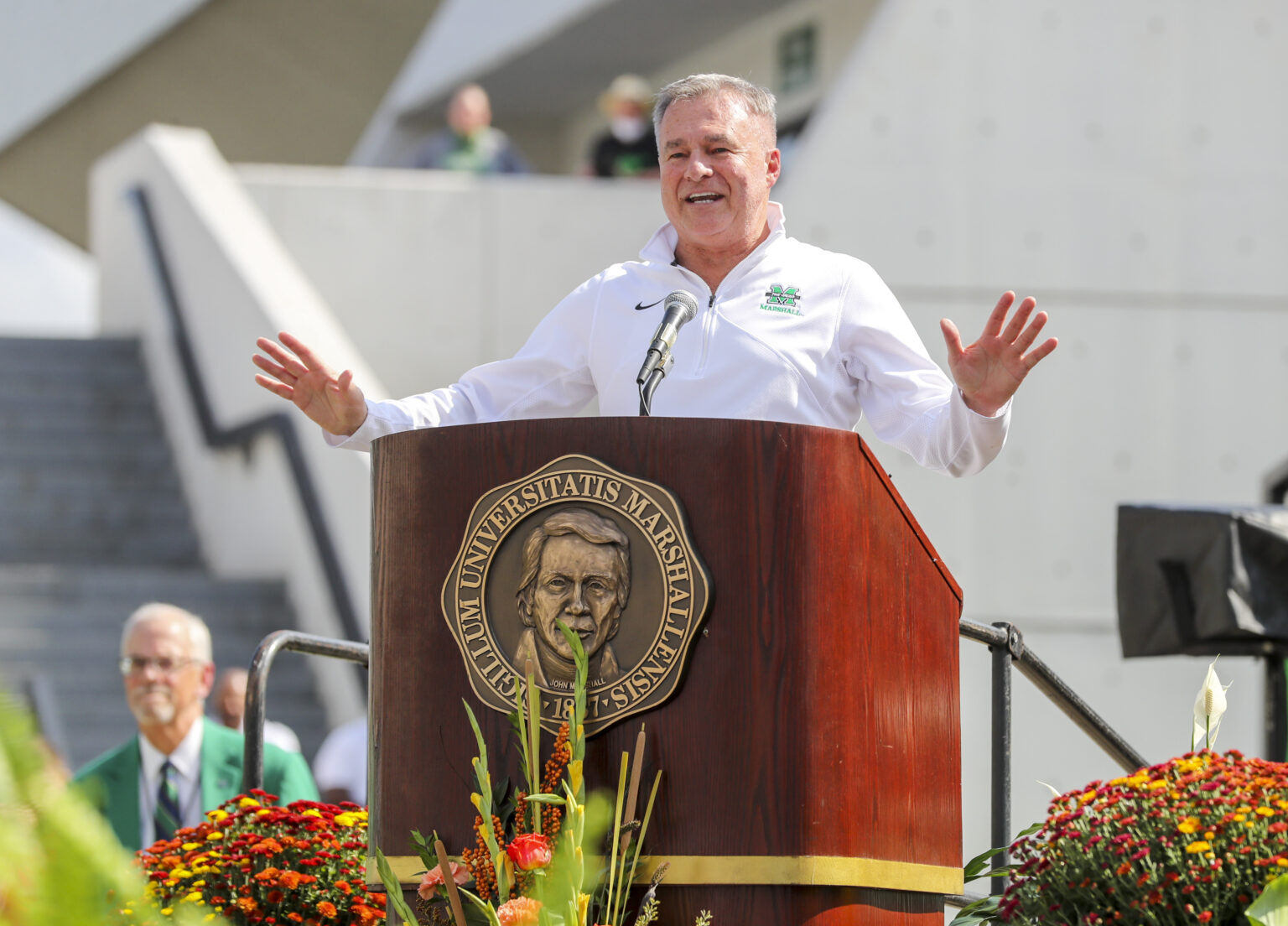 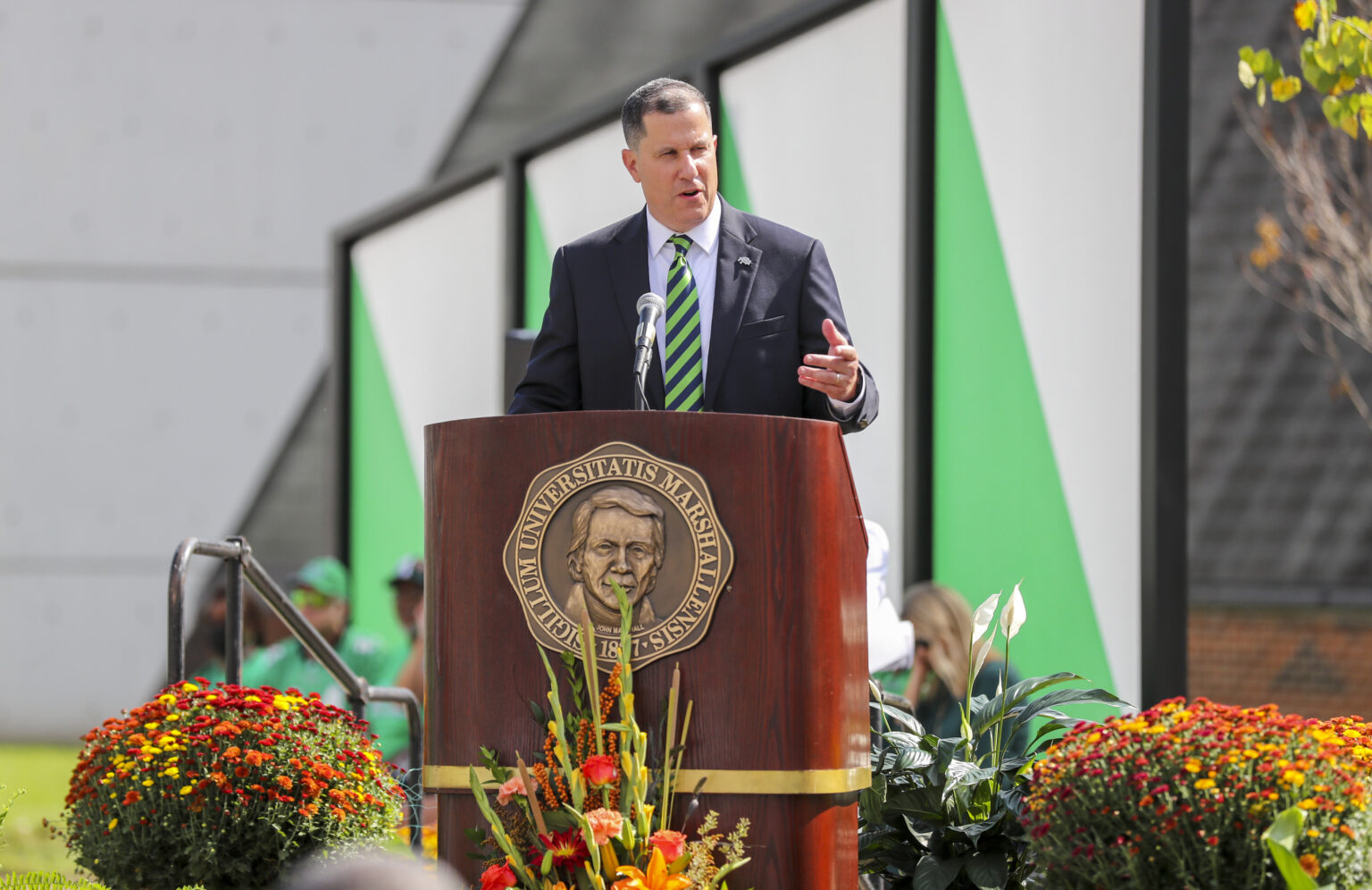 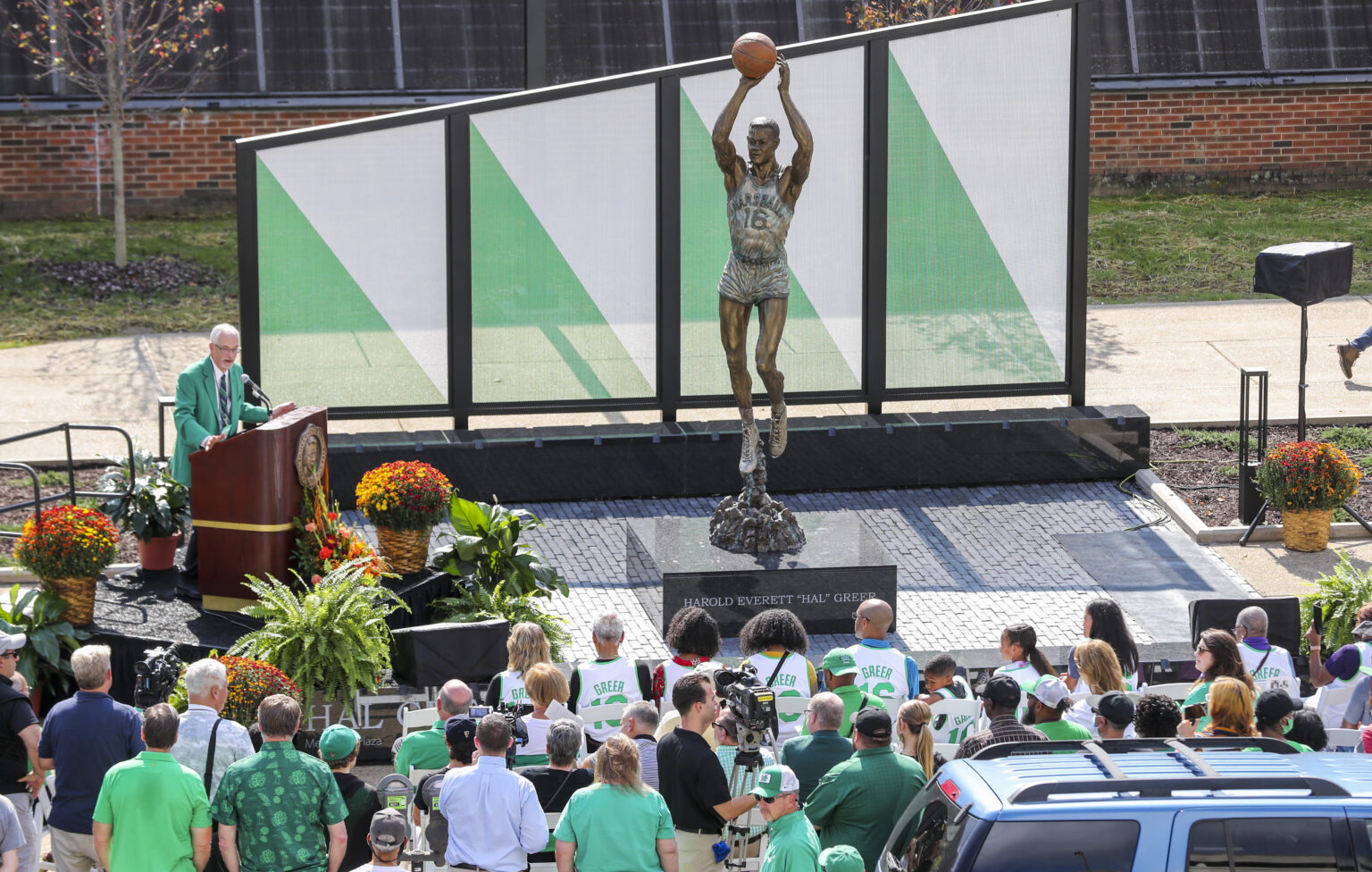 Marshall University President Jerome Gilbert speaks during a ceremony honoring the life of Hal Greer and to reveal a statue of him outside the Cam Henderson Center. Mandatory Credit: Ben Queen-USA TODAY Sports

HUNTINGTON, W.Va. — Marshall packed nearly all its scoring into a compressed time frame as quarterback Grant Wells threw two passes to turn a 13-6 deficit in the final minute into a 20-13 overtime win over a stunned Old Dominion team Saturday at Joan C. Edwards Stadium.

The Thundering Herd avoided its first homecoming loss since 2012 and ended a three-game losing streak when a fourth-down pass from D.J. Mack Jr. to tight end Zack Kuntz on a fade route fell incomplete. Marshall players and fans in the crowd of 24,172 went crazy, while the Monarchs suffered their third-straight agonizing defeat (Buffalo, UTEP and Saturday).

“We got into this position as a team,” first-year Herd coach Charles Huff said. “We’ve got to get out of it as a team. A lot of discipline issues. The guys kept playing. You got to see today that this team will fight. This is what Marshall’s all about. Early in the morning, the Hal Greer thing. We’ve got to focus on what we need to do consistently. If we do, we’ve got a chance.”

Safety Brandon Drayton, who returned from injury for this game, came up the middle on a rush and forced Mack to hurry his pass.

Marshall (3-3, 1-1) got its only touchdown in regulation when Wells hooked up with Willie Johnson for a 52-yard strike as he won in man coverage with 32 seconds left to play. Wells hit 5-of-7 passes for 97 yards on the drive (due to penalties).

Old Dominion got a break on the ensuing kickoff when the Herd’s Owen Porter got called for targeting for a first down at its 48. The Monarchs moved to the Herd 41 and Nick Price came on a for a potential game-winning field goal try from 58 yards, but it fell a couple of yards shot.

“When that ball left his foot, at that point to have that many mistakes, play that sloppy, we’re at the mercy of the gods,” Huff said. “There’s ebb and flows in a season. This time we ended up on the right end.”

Shane Ciucci provided the Herd with six points on field goals of 42 yards in the first period and 22 yards just before the half.

On Marshall’s first possession, Wells was brought down for a loss of 1 yard on fourth-and-1 from the ODU 21.

Marshall had a third-quarter drive halted at the ODU 21 on an interception by R’Tarriun Johnson. Wells had another pass picked off by Roger Cray in ODU territory. That play prompted some boos from the crowd.

Huff never thought about making a switch. He even talked about a call he had with former Herd quarterback Chad Pennington earlier in the week when Pennington recalled he had five interceptions once in a game.

“He makes mistakes, I’ve got his back,” Huff said of Wells, who is from Charleston. “He’s our quarterback. You saw what he could do today. We’re riding with him. Great players step in in big-time moments. You can’t play a perfect game, but you play the next play perfect.

At the start of the fourth period, Steven Gilmore picked off a desperation pass by Mack at the 1-yard line to end the threat. There were several other possessions where the Monarchs had a short field, but could get no points. The Marshall defense has given up 13 points in the last six quarters plus an overtime.

“The defense responded,” Huff said. “They’re starting to play the way most people expected. We can’t keep putting them (defense) in those positions. A big stop at the end. We’re starting to see the type of defense we can be.”

ODU started its next drive near midfield, but again lost yards and nearly a fumble before having to punt.

Marshall later drove into ODU territory, but Ali lost 4 yards on a third-down run and the Herd went for it again. This time, the Monarchs broke up a pass intended for Xavier Gaines with 7:42 left.

The drama at the end seemed to awaken the Herd crowd. There had been little to cheer about until then.

“Confidence is something’s that built,” Huff said. “You’ve got to have some returns. Today I think was one.”

On the game-tying drive, Wells found Ahmed for gains of 16 and 14 yards. Wells got sacked on the play before he hit Johnson.

Marshall returns to action on Friday at North Texas. Old Dominion is home Saturday to Western Kentucky when the Monarchs try again to end a four-game skid.

On defense, the Monarchs limited the Herd to 390 total yards, 150 below its season average.

Marshall is now 27-9 in homecoming games including a nine-game win streak.

Marshall officials recognized the 1996 Herd team before the game and introduced players who returned. The Herd went 15-0 and won I-AA national title that year.

Greer, an NBA All-Star, had the dedication of the Hal Greer Memorial Plaza featuring a huge statue of Greer just outside one entrance on Third Avenue to Cam Henderson Center just before kickoff. Greer, who played guard, is from Huntington, attended Douglass High School, and was the first black athlete recruited to Marshall back in the mid-1950s. He played from 1958-73 with the Syracuse Nationals and then Philadelphia 76ers when they moved. He was voted one of the top 50 greatest players in NBA history in 1996.