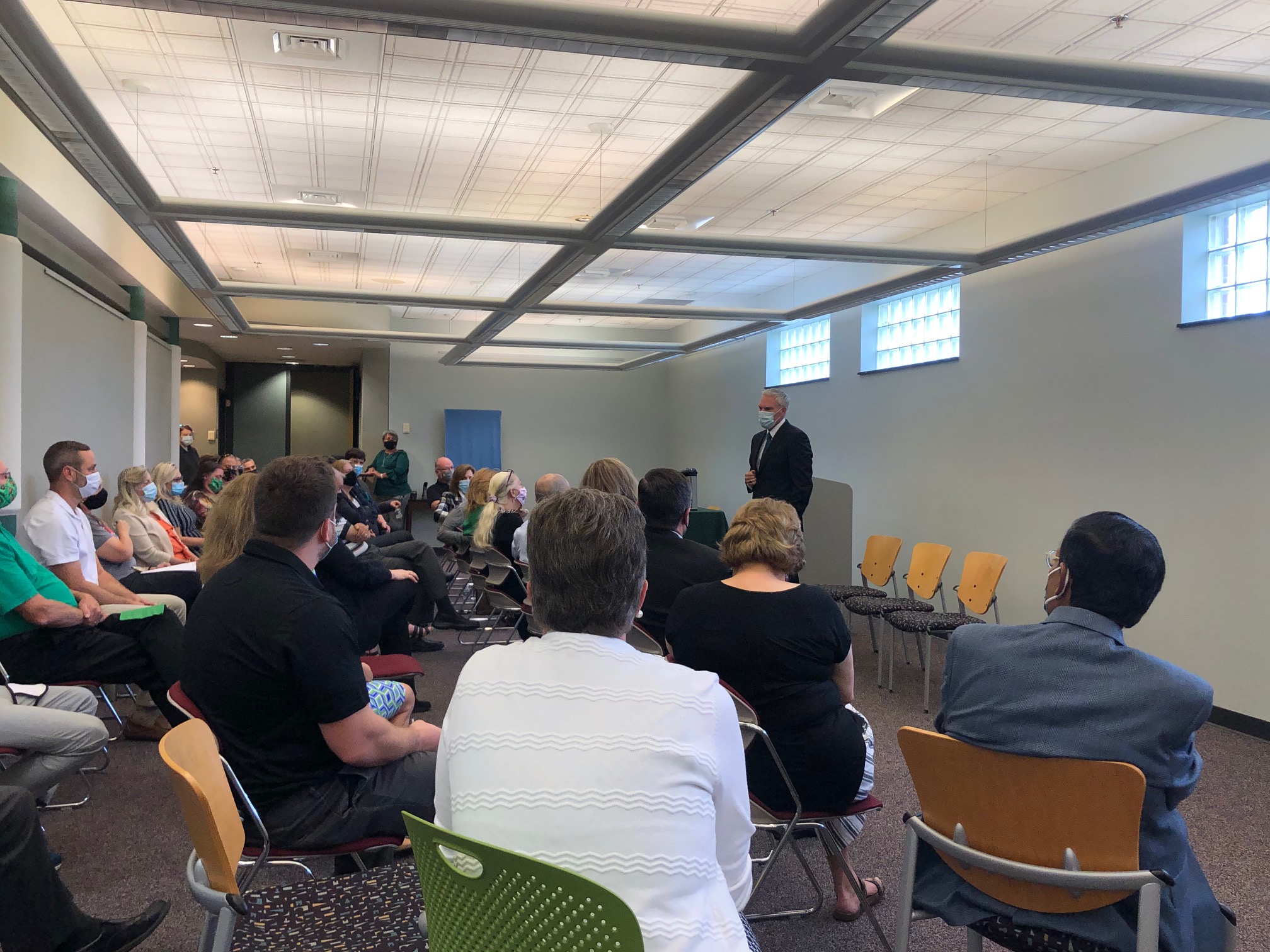 Former Intuit CEO and Marshall alum Brad Smith speaks to a crowd at the MU South Charleston campus on Tuesday.

The Kenova native and Marshall University alum spoke in front of a packed room of Marshall officials Tuesday at the South Charleston campus during one of his stops while being a finalist for the institution’s president position.

“Mark Twain once said, ‘The two most important days in your life are the day you are born and the day you find out why,'” Smith said.

“When I stepped down as CEO of Intuit in 2018 I got clear what my purpose was and my final chapter. That was to come back to West Virginia and invest in those who invested in me. This would be the ultimate privilege to be able to pay that purpose off.”

Smith is one of five finalists to succeed Dr. Jerome Gilbert. Gilbert previously announced he will leave the institution when his contract expires next July.

He is the only candidate that does not come from a background of higher education, having a background in philanthropy, leadership and entrepreneurship. Smith served as the CEO of Fortune 500 company Intuit for 11 years. He is the executive chairman of the board of Intuit, chairman of the Nordstrom board and a board member of Momentive (formerly SurveyMonkey). He formerly served on the board of Yahoo as well.

Smith complimented the other four finalists for the position, saying Marshall will be in great shape no matter the selection. He added that while he knows he’s the only non-traditional candidate, he has a background that makes him unique.

“What I think helps me in the situation is I am also a native of West Virginia, I am a graduate of our public education system in West Virginia, I’m a proud son of Marshall. None of those things qualify me to be president but they prepared me to a 36-year career that led large complex organizations through transformational change while preserving the core mission of that institution,” Smith said.

“That’s what Marshall is facing now. We are in the 21st century where higher learning is being changed and disrupted. It’s important to preserve who you are while adapting and evolving to who you need to become.”

Smith said one of the first things he would like to do as president of Marshall is to go on a listening tour around the Marshall community and the state to better understand the issues facing the institution and even ask his own questions.

Smith told the South Charleston crowd that Marshall needs to figure out how to become a prosperity platform that welcomes students to advance success, creates ideas and grows the economy.

He said the way to do that is to make sure the curriculum is in-demand and there is an on-demand delivery system. Smith also stated that diversity, inclusion and belonging play a role in the growth and he challenged the crowd to look at his track record of those with the companies he has led.

“I have a proven track record of navigating transformational change while also understanding how to preserve the core mission of an institution. Marshall’s storied history is something that I want to make sure we do not lose sight of as we continue to adapt and evolve with 21st century opportunities,” Smith said.

In philanthropy, he has most recently co-founded the Wing 2 Wing Foundation with his wife Alys that supports education, entrepreneurship mentoring, and investment to showcase West Virginia for the nation. The foundation most recently developed the Ascend West Virginia program, paying people to move to the Mountain State.

He is a well-known donor to Marshall giving multiple gifts of millions of dollars including a $25 million gift for college of business in 2018. In recognition of the Smiths’gift, the college of business named its undergraduate and graduate schools the Brad D. Smith Undergraduate School of Business and the Brad D. Smith Graduate School of Business, respectively.

Smith had plans to meet with the Marshall Board of Governors Tuesday night for dinner and meet with Marshall faculty, staff and students in Huntington on Wednesday.

Smith earned his bachelor’s degree from Marshall University and his master’s degree in management from Aquinas College in Michigan.

“Anything I have ever accomplished in life is because someone at Marshall University invested in me. I would consider it a real honor to be able to pay that privilege forward to the next generation of students,” he told MetroNews.

Other candidate visits include:

Dr. Robyn Hannigan, the provost at Clarkson University spoke at the South Charleston campus on Monday.

The meetings will also be livestreamed at https://livestream.com/marshallu.

The Board of Governors is expected to make its final selection at its regularly scheduled Oct. 28 meeting.