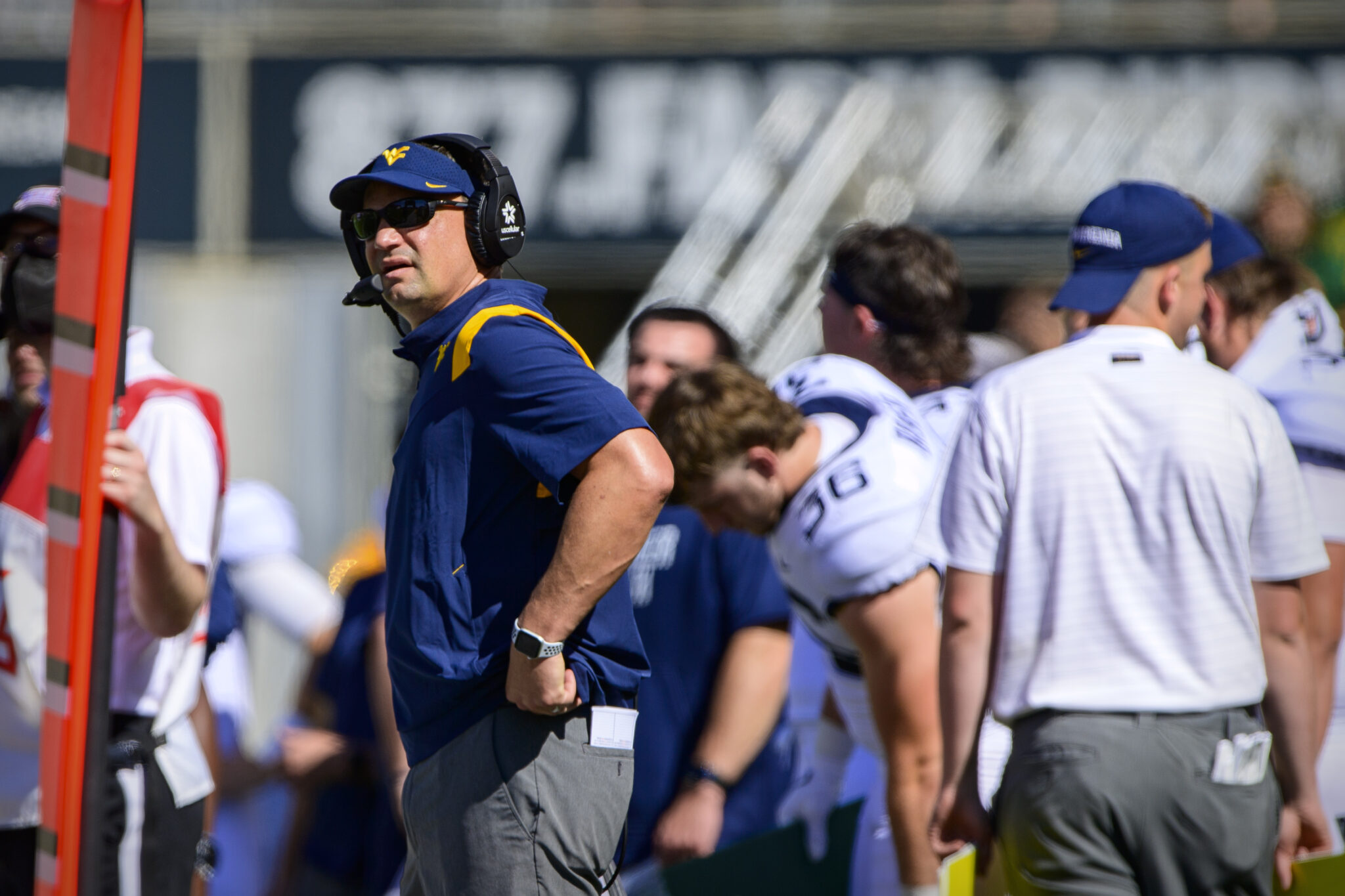 MORGANTOWN, W.Va. — The Mountaineers face a monumental task in the second half of their 2021 season to erase the disappointments of the first half. Standing with a 2-4 record on their bye week and with the combined records of their next five opponents at 18-8, Neal Brown’s club must collect at least four victories to become bowl eligible for the second consecutive season.

“We’ve got a lot of football left. We have half a season. Everything is doom and gloom right now. I don’t think you approach it like that,” Brown said.

West Virginia’s rushing offense [111.8 yards per game] ranks last in the Big 12. Senior Leddie Brown is averaging 4.4 yards per tote, well below his 5.1 per carry average in 2020. Although Brown is tied for sixth in the Big 12 with seven total touchdowns, 80 of his 422 yards came on a touchdown run against Virginia Tech.

“We are not doing a good enough job in creating movement for him. We are not getting on some of the second and third level guys at tight end and receiver good enough so he can break extended runs. We are not doing a good enough job hitting some of our play action passes which relaxes some of those safeties where they can’t fill the box quite as quickly. Those are all factors. And I think he has left some yardage out there too. It is a little bit of everything. For us to be successful, we have to make sure he is productive.”

Perhaps no position has generated more topics of discussion within the WVU fanbase than the split reps at quarterback between Jarret Doege and Garrett Greene. Brown says both players have improvements to make in different areas.

“I don’t think playing Garrett has hampered [Doege] or it hasn’t necessarily taken practice reps away from him because we always give our backup reps anyway. The things we are doing with Garrett, we wouldn’t ask Jarret to do and vice versa. Jarret has been a little inconsistent. He has missed some things but I thought he competed really hard on Saturday. He had a couple really good scrambles. He threw the ball away under pressure a couple times. He got smoked on a couple missed blitzes we had. And he got up and delivered the ball the next time, which I think takes real character to do that.

“Garrett, in the run game where he really struggled with his run reads against Texas Tech, I thought his run reads were really improved on Saturday against Baylor. But he’s got to do what he is coached to do in the passing game. I am all for the freelance. But he has got to go from one to two before he takes off and runs. On Saturday, he just took a drop and ran. The receiver group is far and away the most productive group on offense right now. He’s got to be able to utilize them.”

Younger players will receive added reps during the bye week. Brown highlighted several that are progressing.

“[Quarterback] Goose [Crowder] is a guy that has come along. From a leadership standpoint, he probably has as good of skills as anyone in our program. He has really added positive weight over the last nine months since being here in January. The game is starting to slow down for him. He has had two really good Mondays in a row.

“[Offensive lineman] Tomas Rimac is a guy that is not ready to play right now but we think he will. He is progressing well and is really learning how to pass protect for the first time.”

Some Mountaineers may see added snaps on Saturdays in the second half of the season. True freshman Justin Johnson, Jr. is second among running backs with 18 carries for 55 yards.

“He had a couple really nice runs. He missed some protection issues that he can’t do. But he’ll continue and we will work him hard this week.

“[Defensive lineman] Hammond Russell is a guy who has played spot duty. We like what he is doing. He has done a nice job on scout team. I think Saint McLeod is a guy that we’re going to get a hard look at and maybe can help us right now. Aubrey Burks played twenty snaps, or something like that on Saturday. He did a nice job and we will continue to grow him because he needs to play more at the safety position.  [Andrew] Wilson-Lamp has been doing well on special teams. He’s new at corner so there is a little bit of a transition process there.”

Brown acknowledges that WVU will be active in seeking players from the transfer portal for the 2022 season, particularly at linebacker, defensive back and offensive line. He cautions against employing a roster overhaul with transfers.

“I just don’t think that is the right recipe. I think we have some guys we have been able to recruit and you are starting to see some fruits. And you will see even more of them next year.”