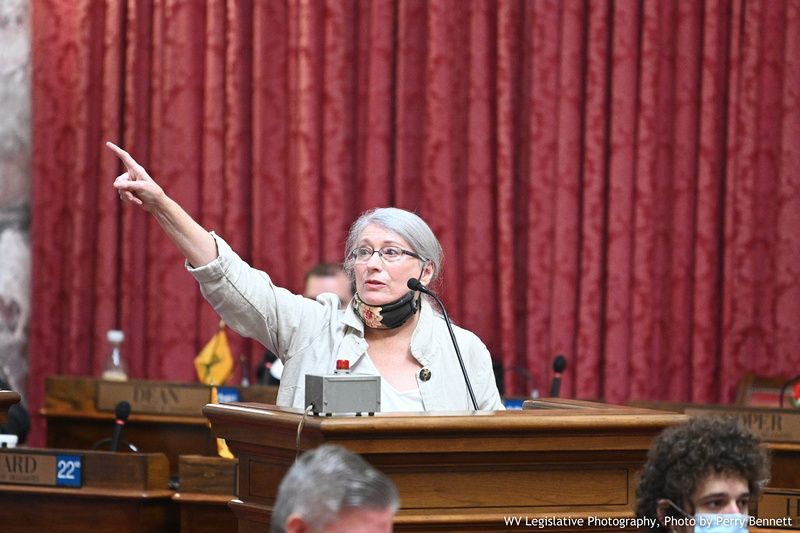 Nyoka Baker Chapman, a member of the board of the Huntington Area League of Women Voters, speaks at a public hearing on redistricting. (Perry Bennett/West Virginia Legislative Photography)

Some West Virginia citizens said they would like to see changes to the maps being considered by lawmakers under the redistricting process.

About 10 speakers participated in a public hearing this morning, focusing on proposed new maps for Congress and the House of Delegates.

Several spoke about how individual communities could be affected by redistricting.

“I hope you can clean this up before it’s all over. I know you can do it,” said Nyoka Baker Chapman, a member of the board of the Huntington Area League of Women Voters.

She focused on specific ways the redistricting proposal could affect the Huntington area. Chapman said she wished lawmakers had established a system as far back as 2018 for guidance from local leaders about the best way to keep communities intact during redistricting.

“Why not develop a redistricting division plan and ask the people in the communities – the mayors, the county commissioners, the people who are community experts, what’s the best way to divide our cities or counties?”

This process is taking place because of the constitutional redistricting requirement kicked off each decade by a new Census.

West Virginia is losing one of its three congressional seats, so lawmakers have had to consider how to split the state into two districts. Lawmakers are also considering the redistricting of state House and Senate maps.  The House of Delegates will be going from 67 single- and multi-member districts to 100 single-member districts.

The House of Delegates, where the public hearing was held, has its map of House districts up for passage today, with amendments still under possible consideration.

Longtime Delegate John Overington, who is no longer in the House, spoke about his advocacy for single-member districts over many years. Overington said he has been involved in the past three redistricting processes.

“Smaller districts are much easier to get to your constituents,” he said.

Kanawha County resident Thornton Cooper, who attended almost all of a series of public hearings about the redistricting process this past summer, said he’d been working on the process for 40 years. He, too, favors single-member districts. But Cooper, who submitted several maps for consideration, advocated for his own rather than what the House is currently considering, saying his treatment of communities makes more sense.

Dijon Stokes of ACLU West Virginia said no matter which party’s leaders have been in charge of redistricting over the years, “There has always been a retaliation or gamesmanship mentality taken toward the redistricting process.”

He questioned the compactness of how some districts are treated in the current map. He urged lawmakers, “Continue to make the process transparent so the public can see each iteration of the maps.”

Some speakers addressed issues with how specific communities are divided in the House districts map. For example, Aryanna Islam of Marion County spoke about the division of communities there.

Kathy Ferguson of Dunbar talked about the history of Institute, the community around the historically Black college West Virginia State University. She objected to the way Institute would be divided.

Julie Archer, coordinator for West Virginia Citizens for Clean Elections, said divides in communities like Elkins, Lewisburg and Shepherdstown could have been treated with more care.

“It’s really disappointing to see in the proposed map that so many communities and towns across the state have been unnecessarily divided,” she said. “There’s not a good reason to split some of these smaller municipalities and counties and break them up.”

Charleston resident Howard Swint objected to a move made to keep Caleb Hanna, one of three incumbent Black delegates, out of a district that would have included the Pocahontas County headquarters for the National Alliance.

“What you’re doing in Pocahontas County, in my opinion, is blatant gerrymandering,” he said. “You are creating districts based not on population data but for political reasons.”

Swint, who has been deeply involved with efforts to remove a Stonewall Jackson statue from state Capitol grounds, displayed a Confederate flag in protest as he spoke. He argued that the National Alliance is being treated with deference in the redistricting process.

Gary Zuckett of West Virginia Citizen Action contended more public trust would result from an independent redistricting commission. He suggested passing a bill to establish that commission in 2022. “That will set us up for next time.”

Meanwhile, he urged delegates to fix the current map while they still can. “The Wetzel County district looks like it has cancer, and it’s gobbling up several other counties,” Zuckett said.