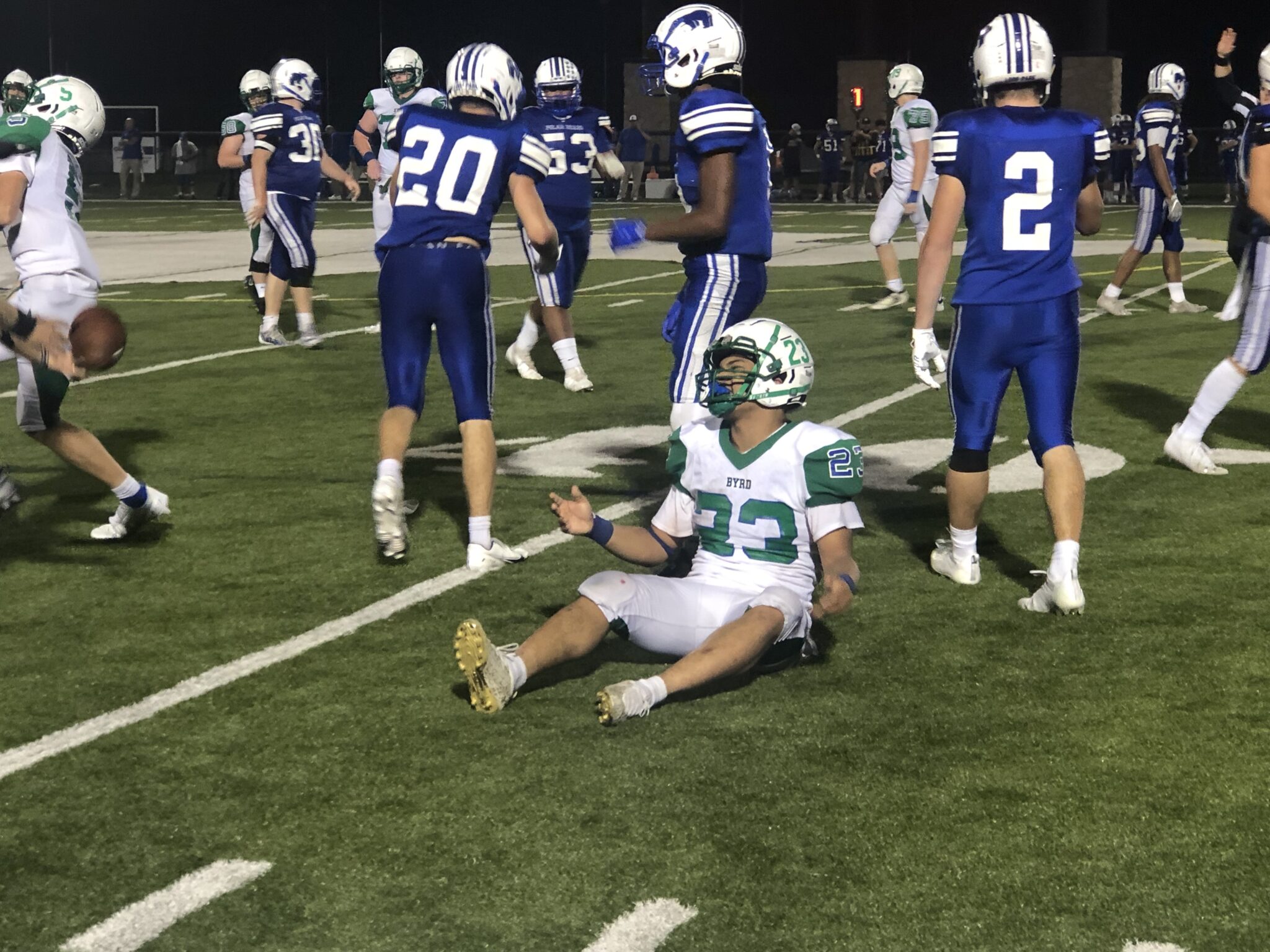 Robert C. Byrd's Jeremiah King reacts after being brought down during the Eagles' game at Fairmont Senior. Photo by Greg Carey/WVMetroNews.com

FAIRMONT, W.Va. — Trailing Fairmont Senior by one point with just inside of 1:30 remaining, Robert C. Byrd was set to get the ball back with a chance to take a late lead Friday at East-West Stadium.

Facing a fourth-and-4 from their own 26-yard line, the Polar Bears kept their offense on the field in an effort to draw the Eagles offside.

A hard count from quarterback Dom Stingo did just that, allowing Fairmont Senior to gain a first down and run out the clock, preserving a much-needed 21-20 victory over the Eagles in its first game since September 24.

“We’ve been good about giving breaks to other teams all season long. It’s nice to get one our way,” Fairmont Senior head coach Nick Bartic said. “It was a big battle all night.”

On its final series, Robert C. Byrd (4-3) took advantage of a roughing the punter penalty on fourth-and-17 to score on Nick George’s 1-yard run with 3:27 remaining. The Eagles elected to try a point-after kick in an effort to tie, but a low snap led to hesitation from Cameron Clark, whose boot sailed wide and left the Polar Bears in front.

RCB never got the ball back and fell for the third time in its last four games.

“We’re screaming, ‘Don’t jump, don’t jump,’” RCB head coach Josh Gorrell said of the costly late offside penalty. “How do you do that? We cover that every day in practice. We rep it.”

Both offenses struggled early, but the Polar Bears (3-3) got a 49-yard touchdown run from Germaine Lewis on the second play of the second quarter for the game’s first points. Trey Longwell then converted his first of three PATs, an aspect that proved critical in the final outcome.

“We were going for two in the beginning part of the year,” Bartic said. “Longwell took the challenge. We’ve had four or five guys who kicked for us get injured this year in terms of kicking and punting. It’s been a little bit of a fiasco at times. It’s been next up, but now we’re down on that list.

“Longwell’s a guy that was always in the mix there. He took it upon himself. He put in extra time and focus on it this past month. If you tell me a couple weeks ago we’re going to hit three extra points to win a game, I don’t know if I’d believe that was going to be the case.”

After the Polar Bears came up with their second down fourth down stop with the Eagles in their territory, they wasted little time doubling their lead as Stingo found Lewis for a 64-yard touchdown pass to make it 14-0 with 6:46 to play in the opening half.

“The biggest thing that helped us out in terms of flow was just playing again,” Bartic said.

However, the Eagles answered in the form of Jeremiah King’s 56-yard TD run, and when Latrell Jones intercepted Stingo in the end zone on the next series, it allowed the RCB to trail by just seven at halftime.

“The guys up front did a tremendous job of getting movement and JK ran like he always runs,” Gorrell said. “We just continue to shoot ourselves and it’s my fault I guess.”

King scampered for 39 yards early in the second half to set up his 2-yard touchdown run 1 minute into the third quarter, allowing the Eagles to pull even at 14.

After forcing a three-and-out, RCB got the ball back and was set to go ahead when King raced 52 yards to the end zone, but a block in the back penalty late in the run brought the ball back to the Polar Bears’ 22.

Lewis finished off a 51-yard drive with a 3-yard TD run on the second play of the fourth quarter, allowing the Polar Bears to regain the lead, 21-14.

“Sooner or later, someone has to step up and make a play other than Jeremiah,” Gorrell said. “When you get an opportunity, you have to make a play.”

Lewis had a strong effort in the victory. He rushed 16 times for 133 yards, caught two passes for 70 yards and scored all three of his team’s touchdowns.

“The offensive line did a good job of controlling the line of scrimmage when it needed to,” Bartic said, “and Lewis had an incredible game.”

The Polar Bears entered the contest No. 22 in the WVSSAC playoff ratings, though a victory over the 10th-rated Eagles will allow them to rise ahead of next week’s matchup at Spring Valley.

“Anytime we play Byrd, it’s going to be a big game and there was obviously added incentive for us to try and get a win,” Bartic said. “That was not lost on us.”