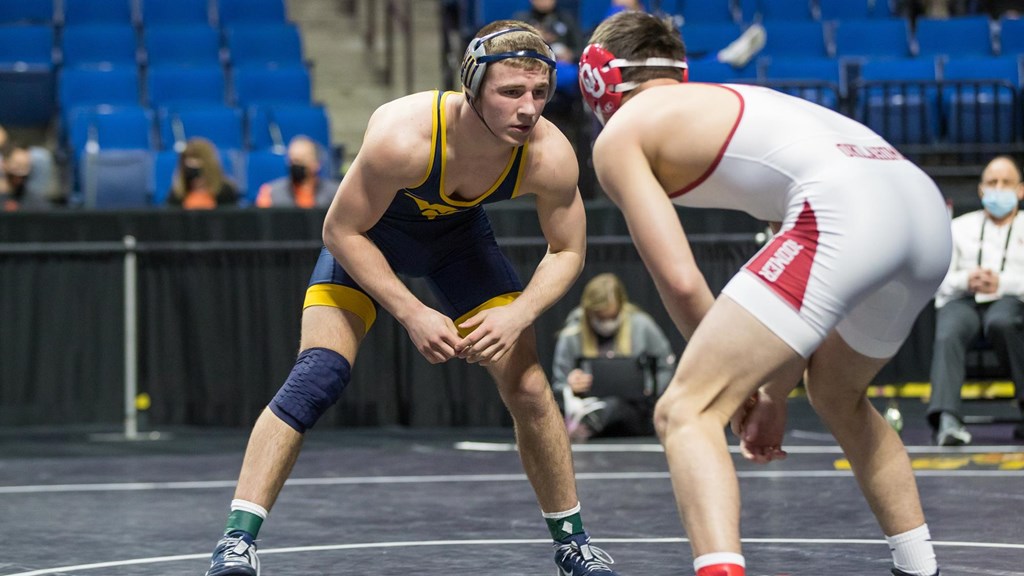 MORGANTOWN, W.Va. — Tim Flynn is set to open his fourth season leading the WVU wrestling program when the Mountaineers compete in the Clarion Open on November 7. Unlike last season, the Mountaineers will have a full competition calendar. Teams across the country were delayed at the start of the 2021 schedule until January due to COVID. Invitational tournaments, which allow for multiple entrants per school, were limited.

“Normally, we will wrestle one weekend in a dual and there’s also open tournaments. There wasn’t a lot of that,” Flynn said. “We had a couple extra matches. So we had freshmen that would normally get 20-30 or more matches at these open tournaments that were two or three match guys. They didn’t get that experience. I am really excited for the first tournament. We are going to try to bring a lot of people to the Clarion Open.

“I think we are just a lot more talented than we have been. From that standpoint, we are really excited especially with the young kids we have.”

“We have a lot of good guys at the same weights. We are going to be good either way it falls at a couple weights,” said WVU heavyweight Michael Wolfgram. “We’ve got a lot of talent throughout the roster. We’ve got a lot of guys that want to win and a little bit of a culture change with [Coach] Flynn coming in, getting the good guys and the right guys in here.”

West Virginia was set to return three wrestlers who competed in the NCAA Championships last March. However, Coal City native Noah Adams did not return to the program following his redshirt junior season. Adams won 65 matches in three seasons and posted a 14-5 mark last winter in the 197-pound weight class.

“That’s a hole when you lose a guy that was No. 1 in the country and a Big 12 champion,” Flynn said. “Someone is going to have to step up, Jackson [Moomau] or whomever. It might be Jace Bradbury. They will step up and have a chance.”

West Virginia’s top finisher in the NCAA’s returns in fifth-year senior Killian Cardinale. In his first season after transferring from Old Dominion, Cardinale finished 7th in the NCAA Tournament and posted a mark of 17-6.

“He had surgery after the nationals so he has been out and is just now getting back on the mat,” Flynn said. “I don’t know that he will wrestle-off. But we like where he is at with his leadership. His body looks good. He just hasn’t been cleared to cut it loose.”

Oak Glen High School product Peyton Hall narrowly missed out on All-American status at 165 pounds in his freshman season. He won three matches at the NCAA’s and went 16-6 last winter.

“The guys are a lot more mature and I am wrestling a lot of older guys. I knew after the season that I needed to get into the weight room and get a lot stronger. My wrestling felt like it was there but my strength and maturity didn’t,” Hall said.

“I tried to go in with no expectations. I was just taking it one match at a time, making sure I was ready and not nervous for matches. I was happy with the outcome. I wish I could have won one more match and been an All-American.”

“I knew him a little bit in high school and I knew he had a great work ethic,” Wolfgram said. “I knew he was freakishly good on a wrestling mat. I know how hard he has been working.”

The Mountaineers return their top wrestlers (by record and matches) in eight of the ten weight classes. WVU went 7-3 in the dual match schedule and 3-2 in the Big 12. Both marks were the best in Flynn’s three seasons in Morgantown.

“More importantly, we got ranked. There was a little recognition and I think the team felt good about being a Top 25 program,” Flynn said.

“Ultimately, we are judged by the NCAA Tournament. How did we finish? How many points did we score? How many All-Americans and qualifiers? In our sport, that has kind of always been in my mind where you rank yourself.”