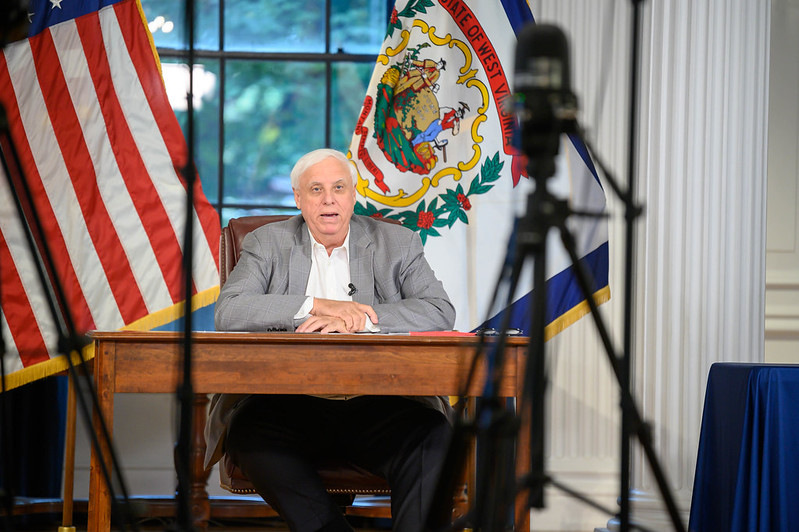 “Why in the world wouldn’t you come?” Justice asked.

West Virginia’s governor said he will provide further encouragement through a legislative resolution, outlined a general concept for how Maryland might be compensated and analyzed a political possibility that “the powers that be” in Maryland might want to part ways with more rural and Republican communities in the state.

Maryland’s governor is one of Justice’s fellow Republicans, Larry Hogan. Maryland’s General Assembly has Democratic majorities in the House and Senate.

“I bet you that the powers to be in Maryland would love to see those people migrate away because from the standpoint of their liberal Democrat views or whatever may be, they’d have a stronghold then.”

Hogan, who was asked about the western Maryland counties by television reporters there, said he understand frustration of people in the region who feel neglected. But he said the initial move was really meant to gain attention.

“But I don’t think it’s the right way to go about it,” Maryland’s governor said. “I think it was a publicity stunt, which worked well because you guys are going to ask about it. But it’s not really going to happen.”

He sees why some people in Western Maryland feel forgotten about by "an increasingly more progressive legislature that doesn't somehow relate" to rural areas. pic.twitter.com/p2vHKy62xQ

This is all a deep uncertainty, but the terp got rolling when Maryland lawmakers from Allegany, Garrett and Washington counties submitted a letter to West Virginia legislative leaders. “We believe this arrangement may be mutually beneficial for both states and for our local constituencies,” they wrote.

The next step would be a possible non-binding referendum to gauge citizen support.

“I have a lot of people say we have a lot more in common with Charleston than we do with Annapolis,” said Maryland Delegate Mike McKay of Washington and Allegany counties, speaking today with Allegany Radio Corp., based in Cumberland.

He noted that this is just exploring the possibility. “The people will decide if they want to do it. All we’re doing is having the conversation, getting the data, and the people of Maryland will decide,” McKay said.

Thank you to all of my guests this morning on Tri-State Today including Maryland District 1 C and Candidate for Maryland Senate District 1 Mike McKay, WV Speaker Pro Tempore District 56 Delegate Gary Howell
Mark Boucot, President & CEO of GRMC and PVHhttps://t.co/7yAKpEmqV3

Not everyone is clamoring aboard.

He was an original signatory, but Buckel wrote that he had not given the effort his full attention because he has been busy. He had been all right with a referendum of citizens, but does not support any process to flip counties to West Virginia.

“I believe, clearly, that we have allowed ourselves to move too far, too fast on this issue, motivated by the political calendar of our counterparts in West Virginia rather than by a prudent strategy,” he wrote in today’s letter.

On air with Allegany Radio Corp. earlier today, Buckel cast doubt on the likelihood of a move.

“That’s never going to happen. The chances of that happening are about zero,” Buckel said.

At the local level, Allegany County Commission President Jake Shade threw some about the secession flirtation. His comments came during a regular board meeting.

“There are so many issues that we’re dealing with. Economic development. Broadband. And to have this distraction, to have something that isn’t going to happen because it has to pass the United States Congress, I question why. I question who thought this was a good idea,” Shade said.

A local subplot is that Shade is running in a Republican primary against Delegate McKay for the state Senate seat being vacated by George Edwards, who was another of the exploration letter’s signatories.

Nevertheless, Governor Justice tried to sell Maryland residents on the idea during a briefing dedicated to promoting the possibility this morning. And later Justice reiterated his support during a separate briefing about the state’s pandemic response.

“I will put this in a resolution at the very next opportunity we have to call our people into special session. And absolutely we will open our arms and welcome,” Justice said at the first briefing. “If you had any mechanism, why wouldn’t you come?” He added, “Get on the bandwagon. For crying out loud, it’s a tremendous opportunity.”

At the later briefing, Justice was asked how Maryland might be compensated for three of its counties.

“It is elongated over a very significant timespan, like 40 years,” Justice said. “And through that, the tax base of the county that’s coming would absolutely carry the amount of dollars it would take to compensate Maryland back. So yes, there is a bridge. There’s a way to do it. From West Virginia’s standpoint there is a way to do it.”

Justice again made his pitch.

“If we don’t dream and think big, we’re never going to realize a big dream if we aren’t willing to at least think big,” he said. “West Virginia would open with welcome arms. That’s step one.”