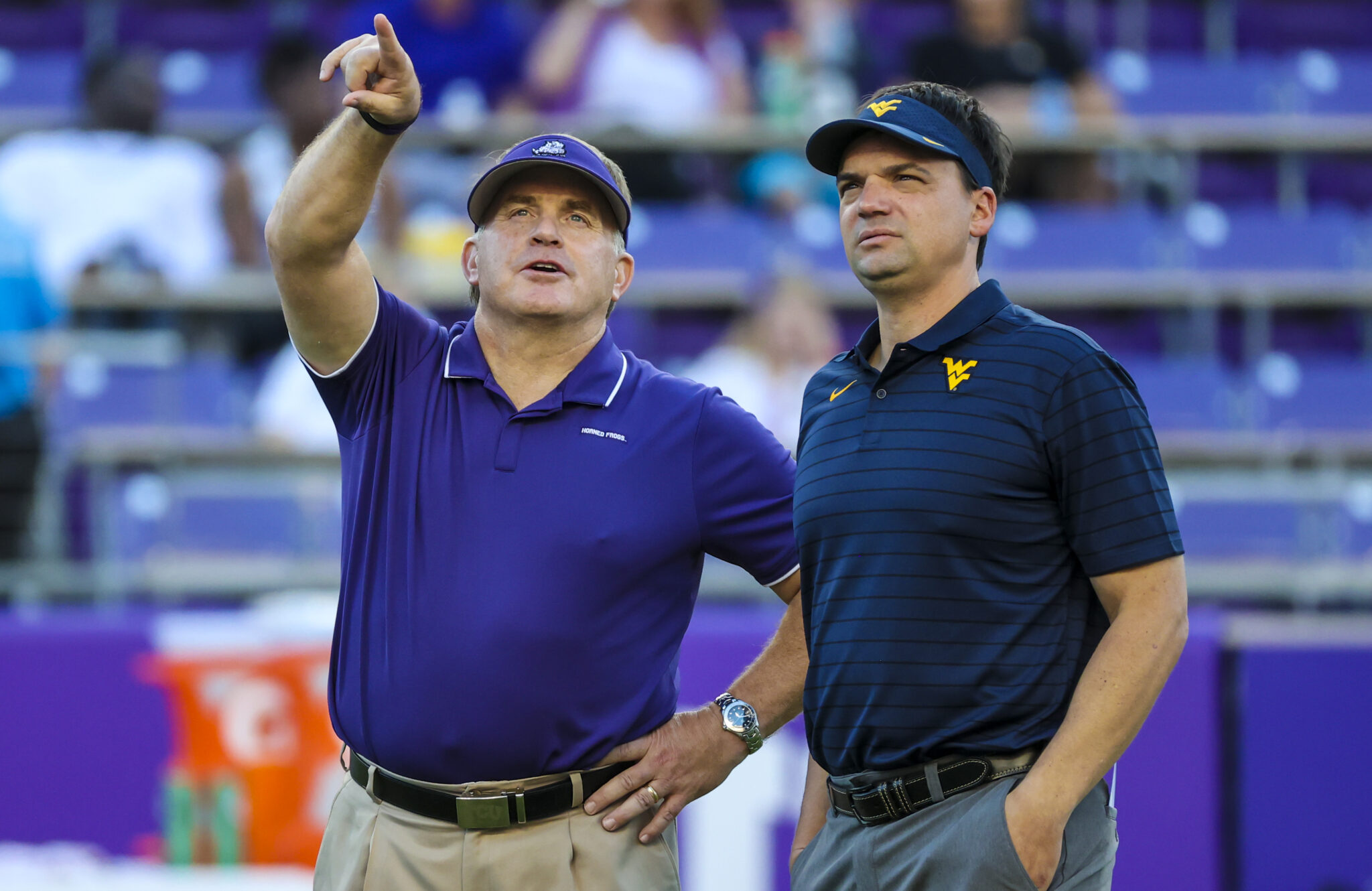 10:50 p.m. — FINAL — WEST VIRGINIA 29, TCU 17. The Mountaineers win for the first time in more than a month and end a seven-game road losing streak that dated back to their victory at TCU in 2019. West Virginia will return home 3-4 overall and 1-3 in the Big 12. The Horned Frogs have identical records in both categories.

10:40 p.m. — Sean Mahone forces a fumble after Johnston makes a 29-yard reception and Woods recovers to give the Mountaineers a third turnover forced. WVU leads by 12 and will try to run some clock down the stretch.

10:30 p.m. — Chandler-Semedo vowed Tuesday that a 2-10 or 3-9 finish wasn’t happening in his final season at West Virginia. The linebacker has let his play do the talking tonight and just came up with a pivotal tackle to bring Zach Evans down for a loss of 5 yards on fourth-and-2. WVU takes over at its 40 with 9 minutes left.

10:15 p.m. — A Charles Woods interception and 32-yard return leads to Brown’s third rushing score, this one from 3 yards. Leading by 12, WVU elects to go for two, but Doege’s pass to Mike O’Laughlin sails incomplete. The Mountaineers have equaled their interception total through six games tonight. WEST VIRGINIA 29, TCU 17, 12:26 4th qtr

10:00 p.m. — The Mountaineers benefit from a Quentin Johnston drop on what may have otherwise been a 69-yard touchdown on the Horned Frogs’ first play. Josh Chandler-Semedo then comes up with consecutive tackles to help force a three-and-out. WVU starts at its 13 late in the third quarter.

9:52 p.m. — Legg is good from 49 yards and the Mountaineers double their lead. Following the turnover, West Virginia picked up one first down, but an untimely false start prior to third-and-5 proved costly. The Mountaineers then chose to run on third-and-10, but Brown was bottled up at the line of scrimmage. WEST VIRGINIA 23, TCU 17, 3:56 3rd qtr

9:45 p.m. — Cornerback Darryl Porter Jr. intercepts Duggan on third-and-4 and his 40-yard return positions West Virginia at the TCU 42 with 6:46 left in the third quarter.

9:35 p.m. — West Virginia punts for the first time on its opening second-half series and doesn’t get what it wanted out of it, as Tyler Sumpter’s kick travels 49 yards for a touchback. TCU takes over at its 20 with 11:49 to play in the third quarter.

9:05 p.m. — HALFTIME: WEST VIRGINIA 20, TCU 17. The Horned Frogs got to the Mountaineers’ 2 on their final series of the opening half. After the Horned Frogs lined up to go for it on fourth-and-goal, West Virginia called its final timeout. TCU came out of the break and decided to kick the field goal. The Horned Frogs intentionally took a delay of game, before cutting their deficit in half on Griffin Kell’s 24-yard boot.

8:48 p.m. — Leddie Brown into the end zone again, this time from 1 yard. West Virginia has scored on all four of its possessions — a pair of touchdowns and field goals. Doege’s 40-yard pass to a wide open Wright came two plays prior to the score. WEST VIRGINIA 20, TCU 14, 2:51 2nd qtr

8:25 p.m. — Garrett Greene quarterbacks West Virginia’s third drive and breaks off a 67-yard run that leads to Legg’s 38-yard field goal. The only throw on the drive was Greene’s 1-yard ‘push pass’ Winston Wright Jr. on third-and-5, one play before Legg was brought on. WEST VIRGINIA 13, TCU 7, 9:07 2nd qtr

8:03 p.m. — West Virginia uses its first timeout prior to a third-and-4 from the TCU 5-yard line. After forcing a punt, the Mountaineers started on their 6. They’ve needed 15 plays to reach this point, including three straight runs by Tony Mathis that totaled 22 yards and Leddie Brown’s 3-yard scamper on fourth-and-1 from the Horned Frogs’ 14. West Virginia holds a 153-29 advantage in total yards thus far.

7:43 p.m. — Casey Legg remains perfect on the season and his 27-yard field gets West Virginia on the scoreboard, but also marks another red zone trip without a touchdown. Legg is now 11-for-11 on field goals. Jarret Doege’s 44-yard pass to Sean Ryan was the key play of the drive. Doege tried to go back to Ryan one play prior to the field goal, but his pass was nearly intercepted. TCU 7, West Virginia 3, 10:57 1st qtr

7:35 p.m. — A nightmare start for West Virginia. Derius Davis returns the opening kickoff 100 yards for a touchdown. What started as a strong season on special teams for the Mountaineers has taken a turn for the worse in recent weeks. TCU 7, West Virginia 0, 14:46 1st qtr

7:20 p.m. — Defensive lineman Taurus Simmons, safety Sean Mahone and center Zach Frazier are West Virginia’s captains. Jackie Matthews remains the starter at spear in place of Scottie Young, though WVU head coach Neal Brown said Tuesday that Young would play. Brown has beaten veteran TCU head coach in both of the previous meetings. Patterson is the third active winningest coach in the sport behind only Nick Saban and Mack Brown.

7:10 p.m. — West Virginia (2-4, 0-3 Big 12) enters Saturday’s 7:30 p.m. matchup at Amon G. Carter Stadium losers of three straight overall and seven straight on the road. The Mountaineers are after their fourth straight victory over TCU (3-3, 1-2), and their last win at this venue marks the last road game West Virginia won.

The Mountaineers have arrived at Amon G. Carter Stadium: pic.twitter.com/ofCX5gm27E

There will be football. pic.twitter.com/sJzR8dELat

Setting the Scene from Fort Worth

In large part because of injuries, TCU’s defense has not performed up to its usual standards