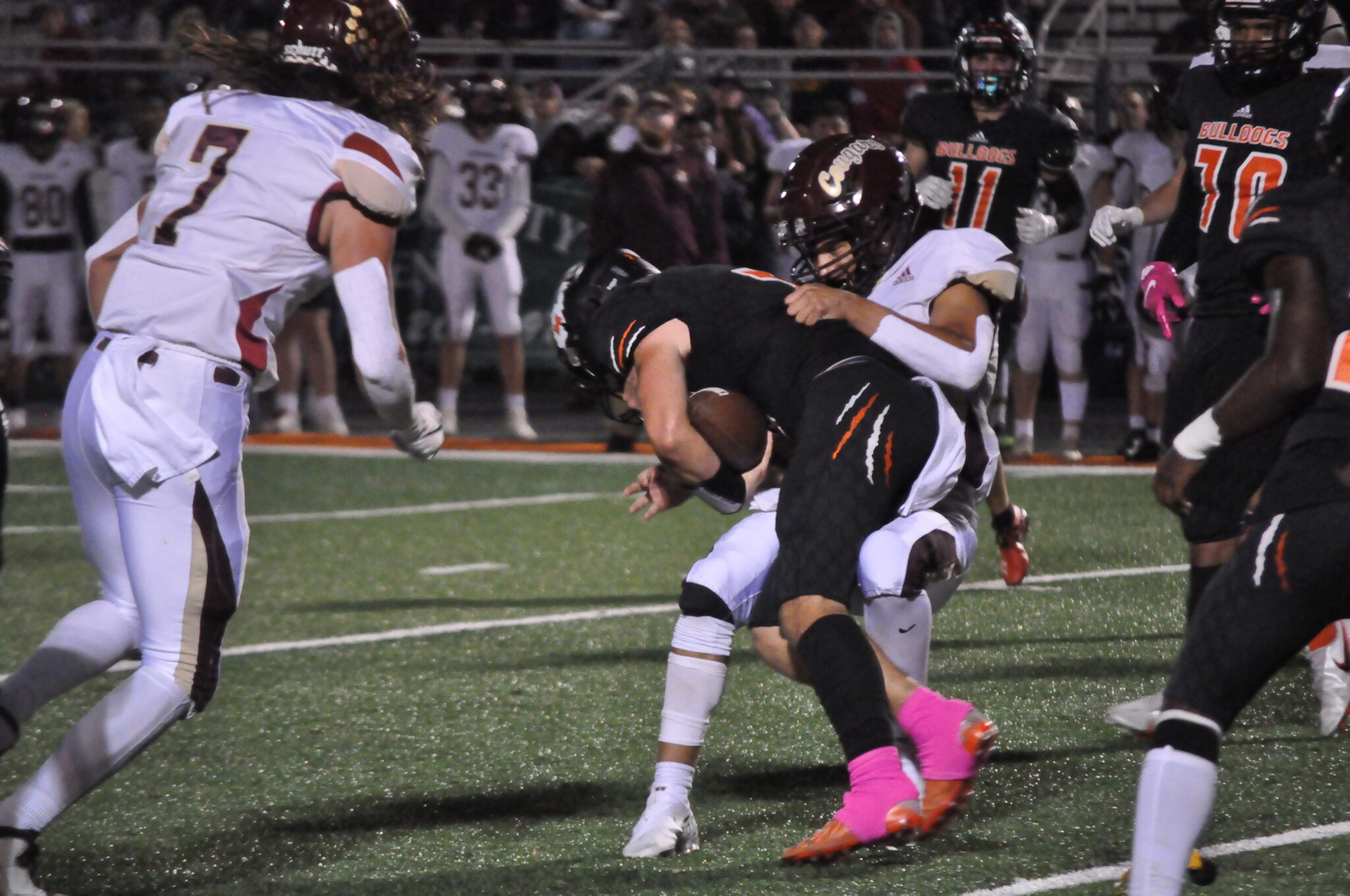 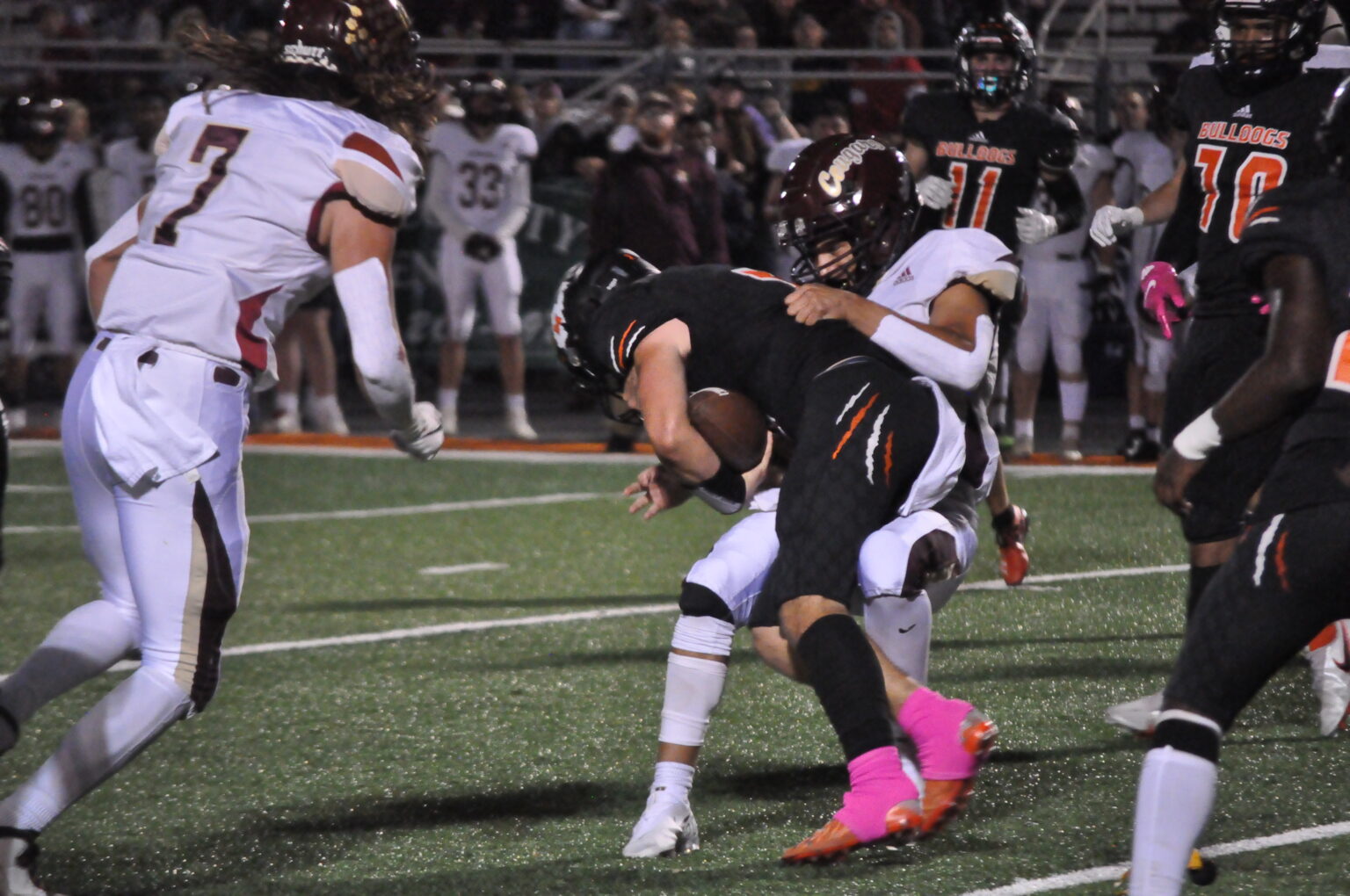 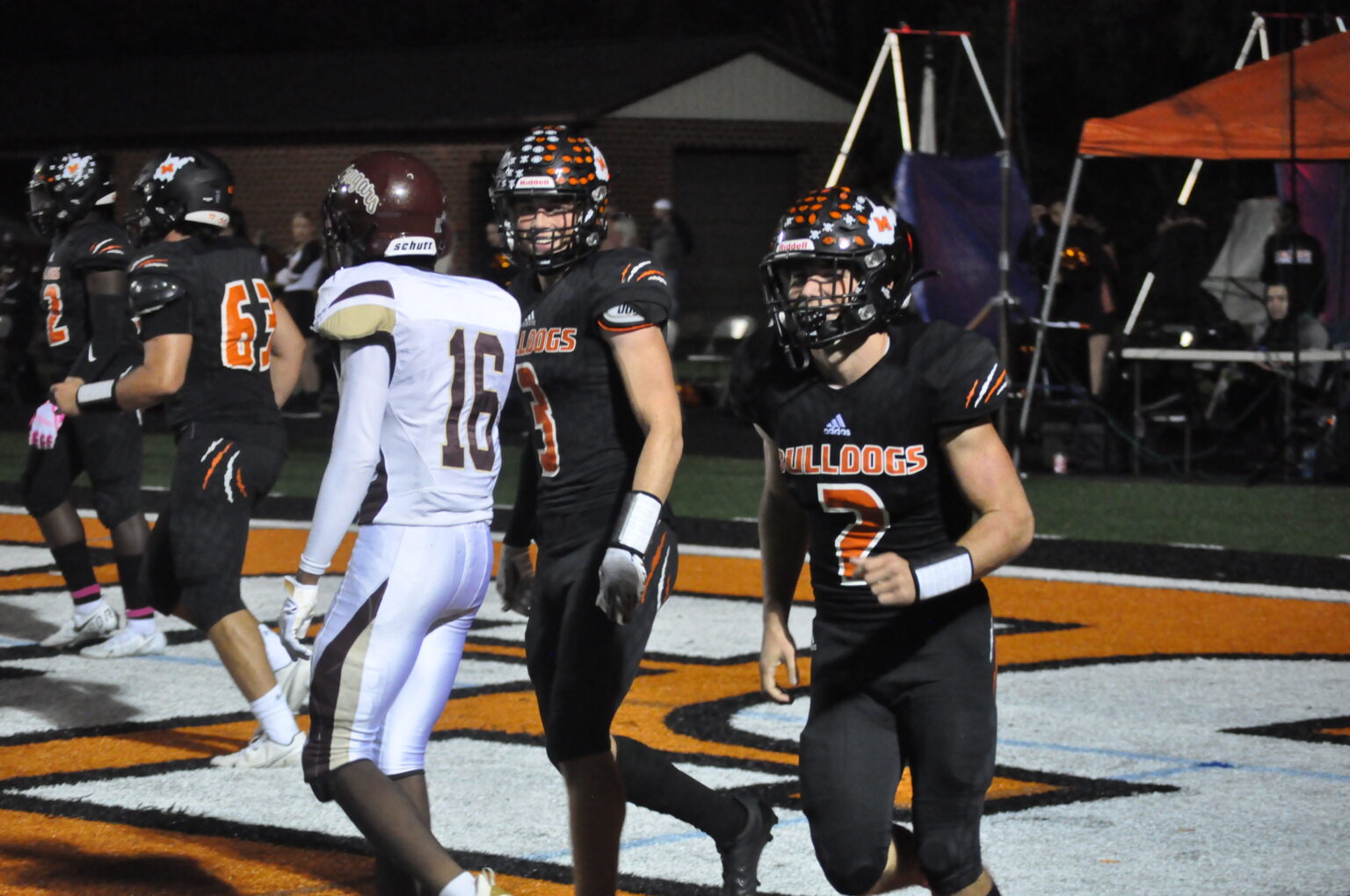 Martinsburg's Murphy Clement (2) and Hudson Clement (3) are all smiles. Photo by Greg Carey/WVMetroNews.com 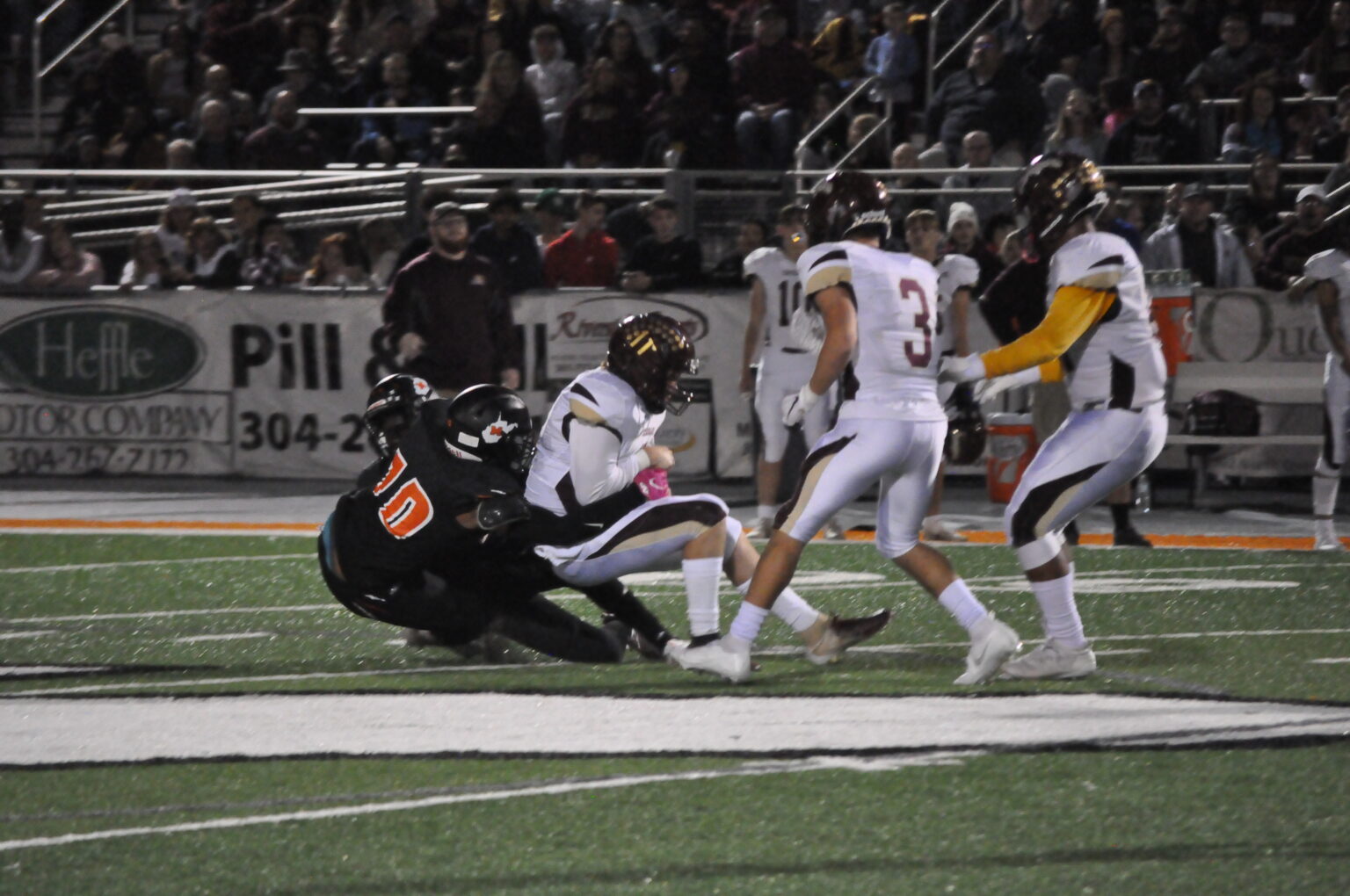 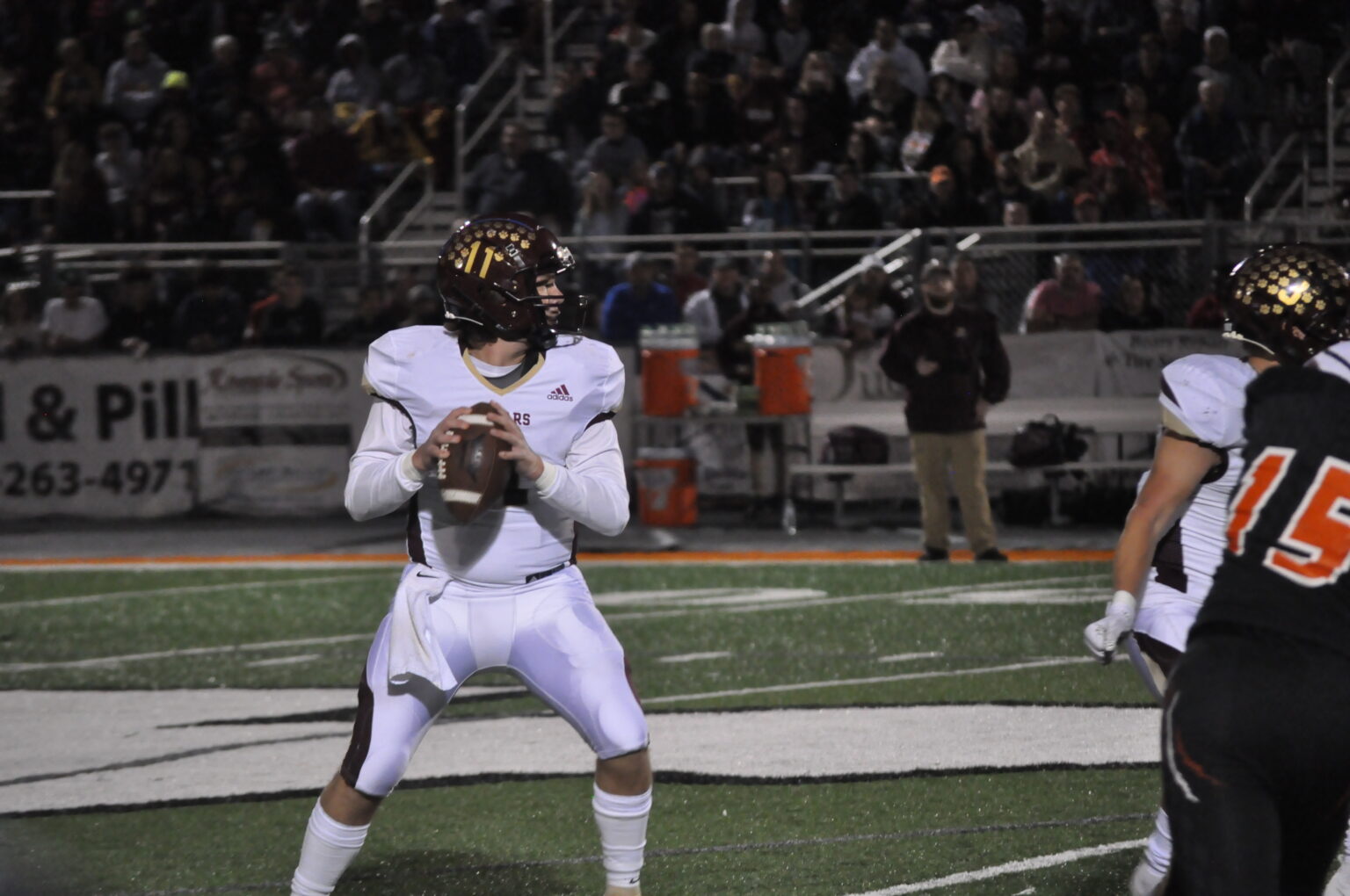 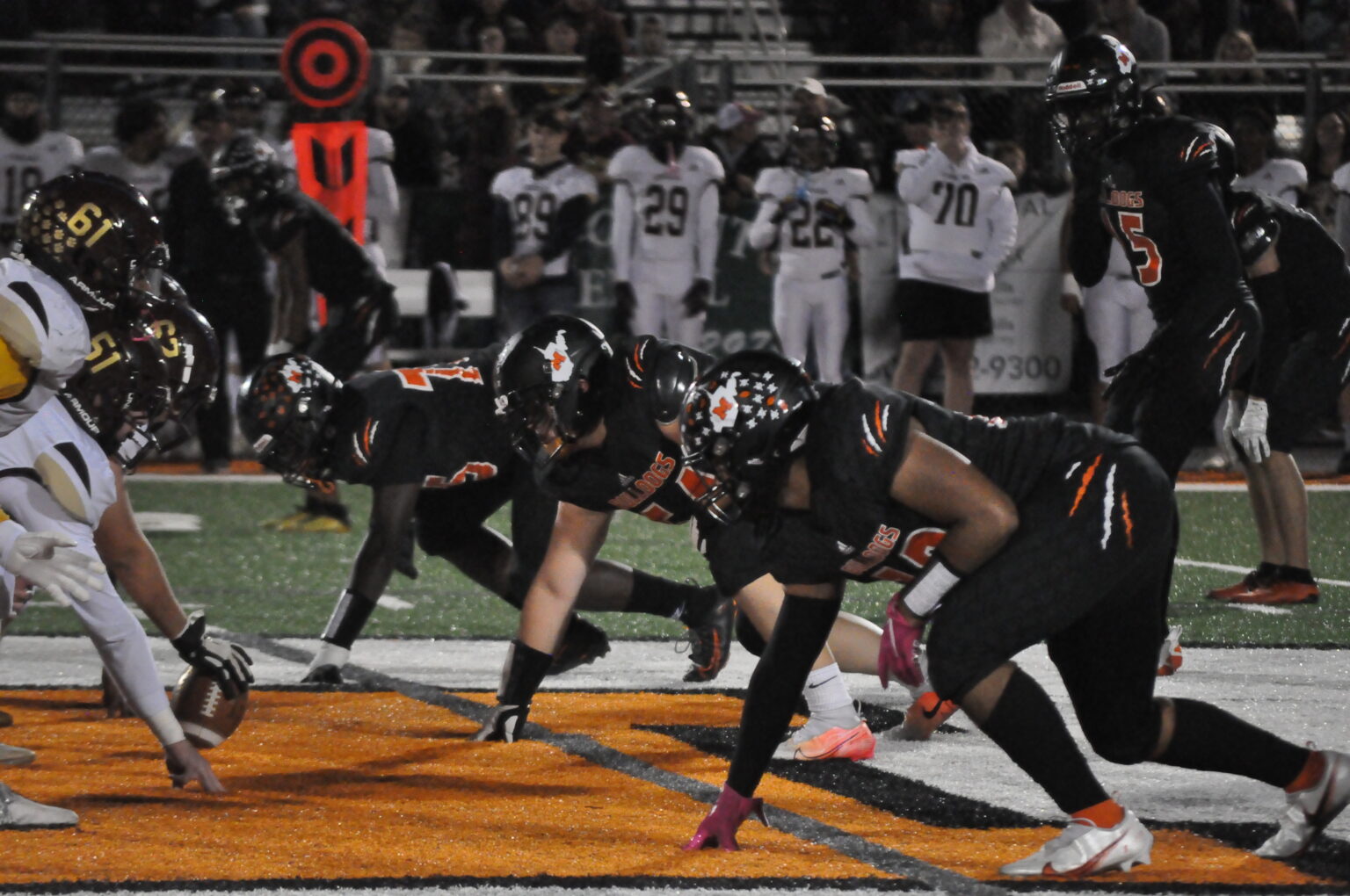 Martinsburg's defensive line had a strong showing against Jefferson. Photo by Greg Carey/WVMetroNews.com 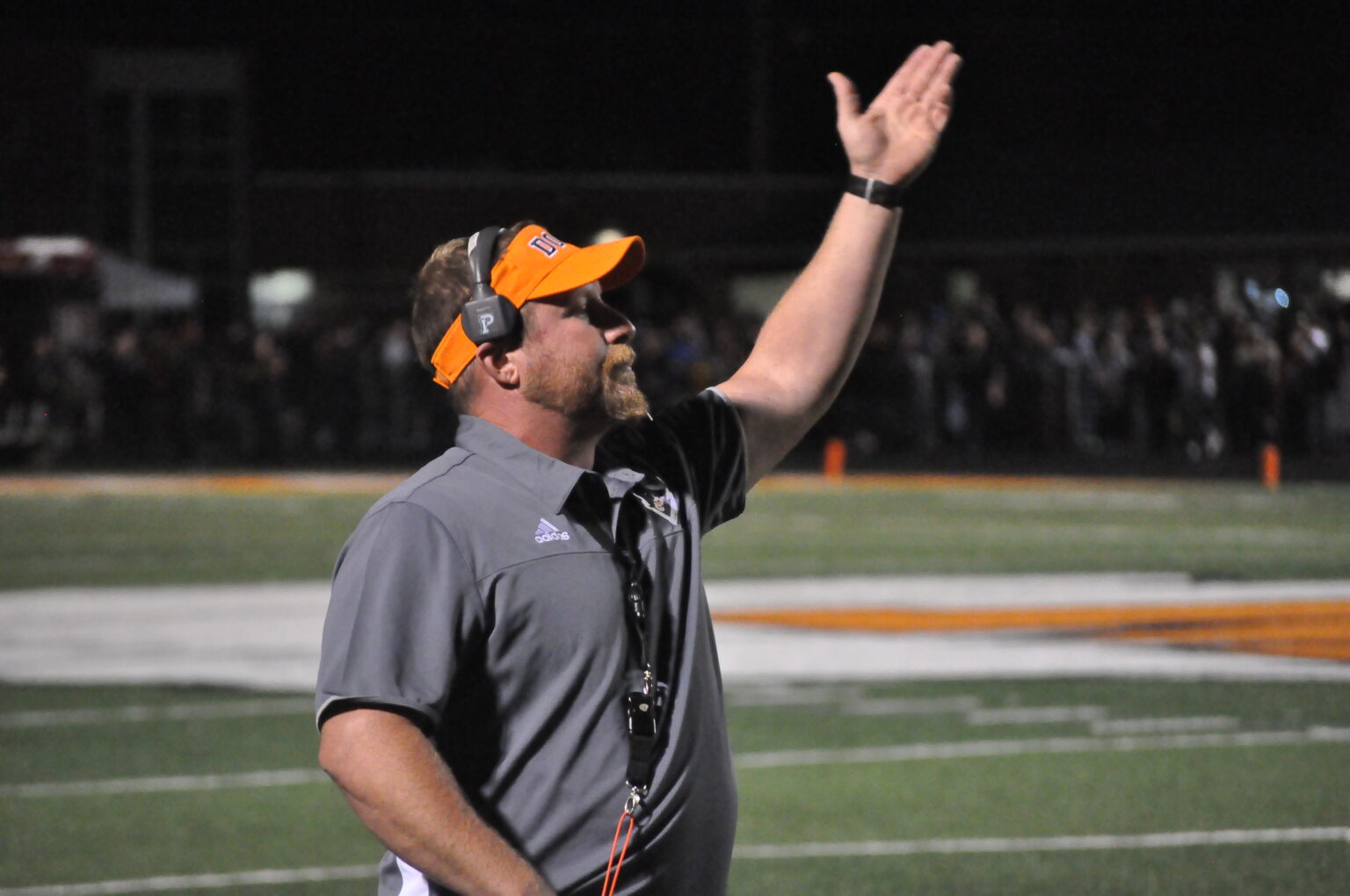 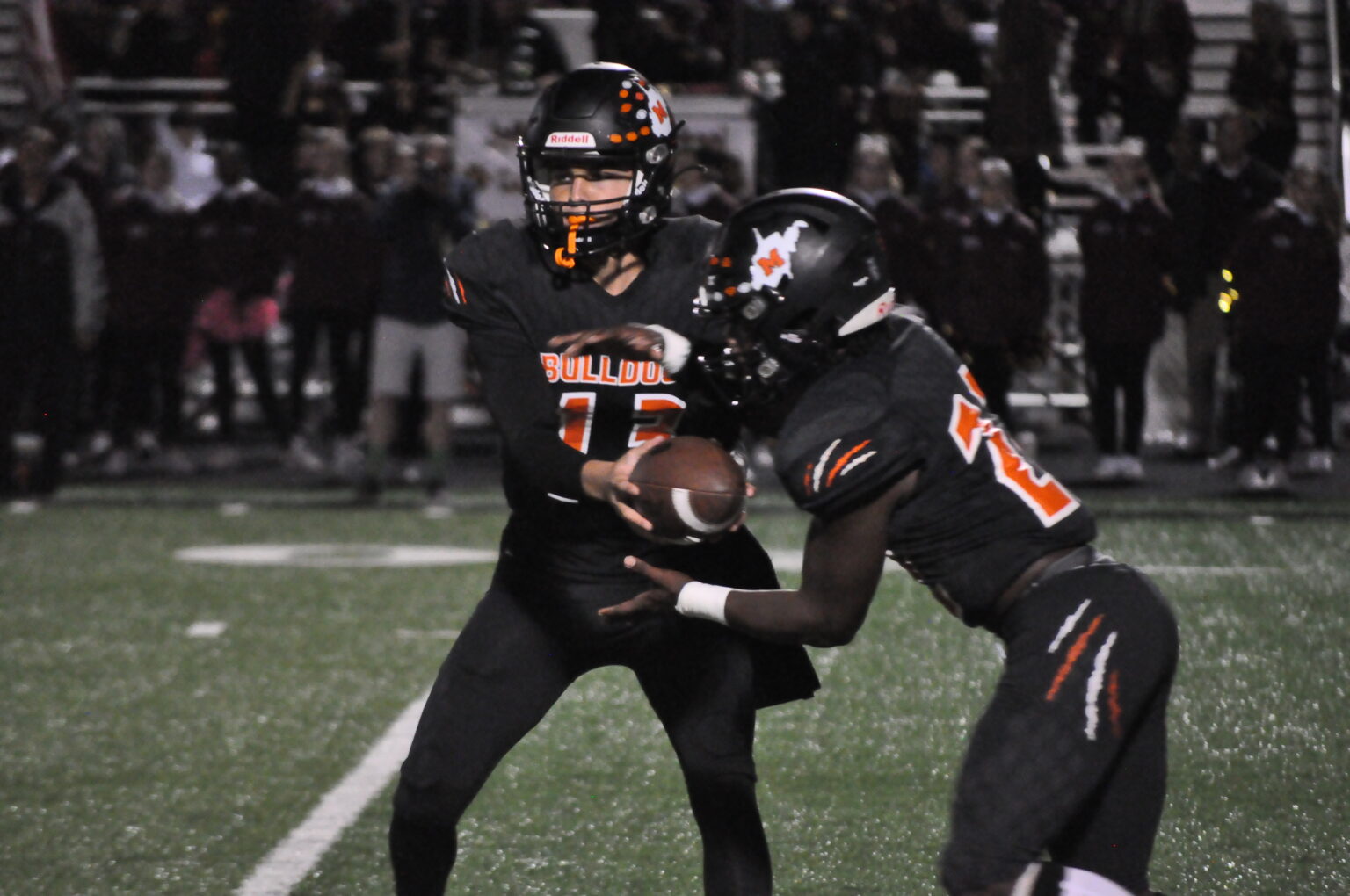 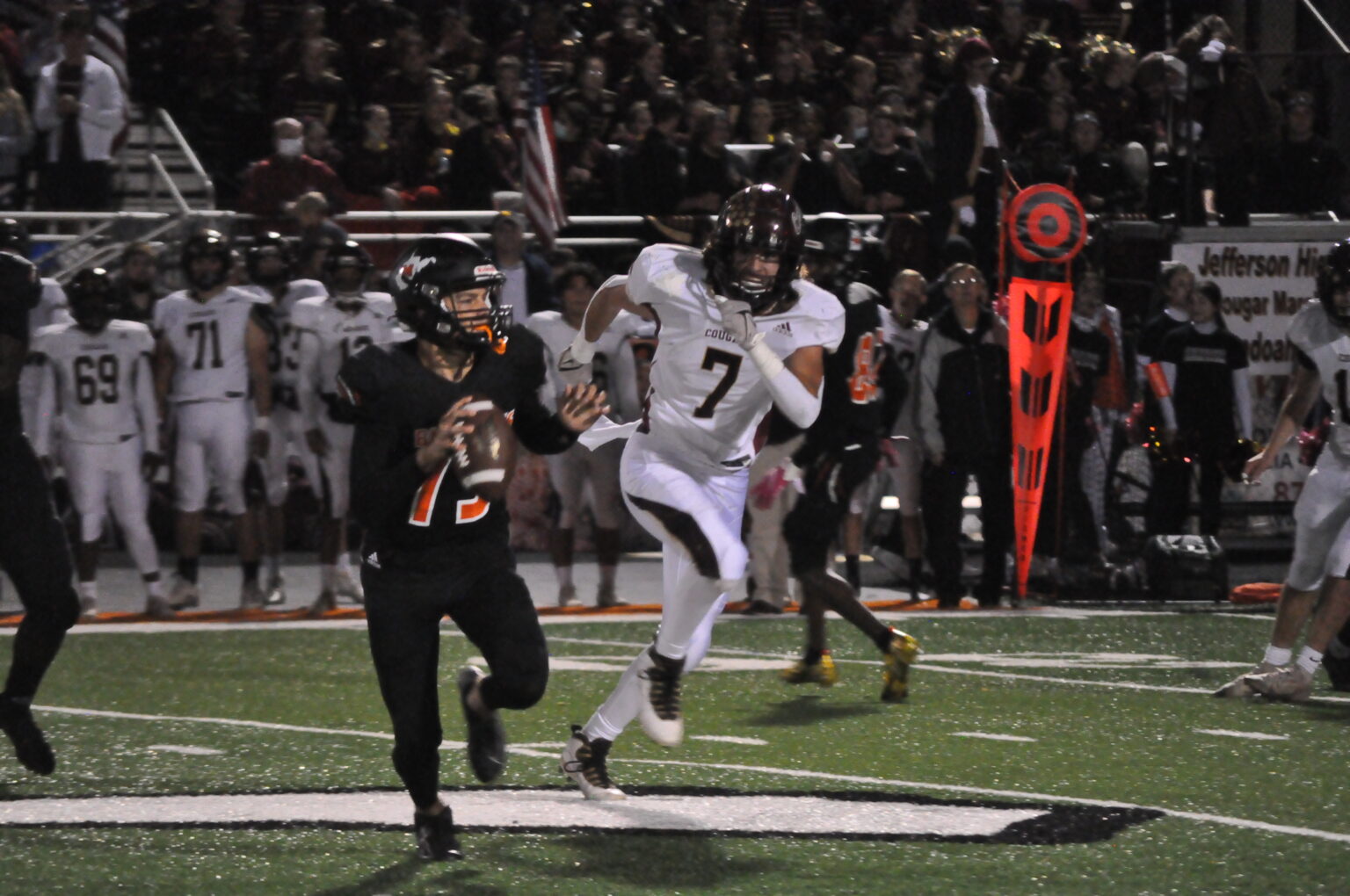 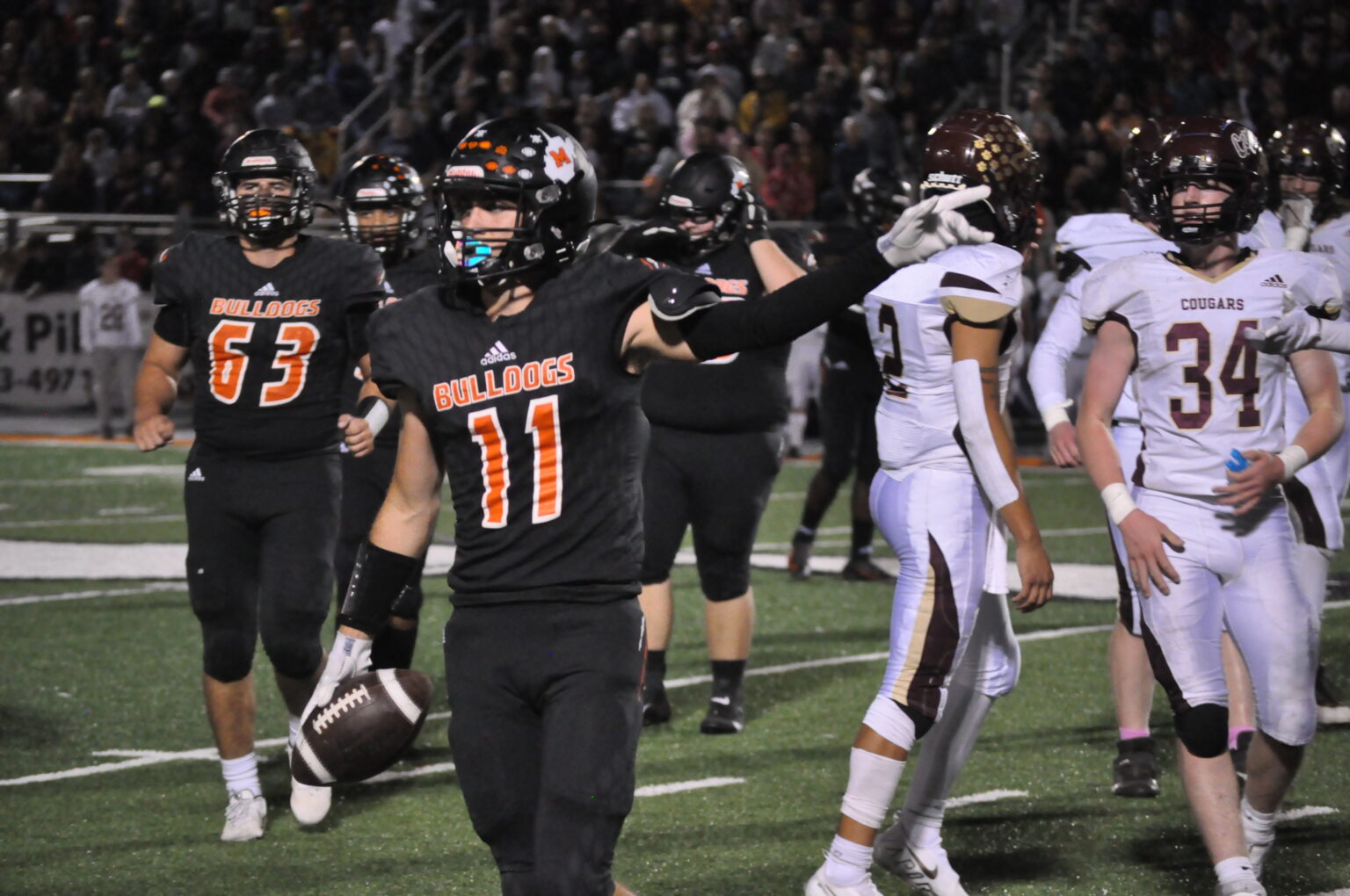 Martinsburg's Roman Pierson signals for a first down after hauling in a pass. Photo by Greg Carey/WVMetroNews.com 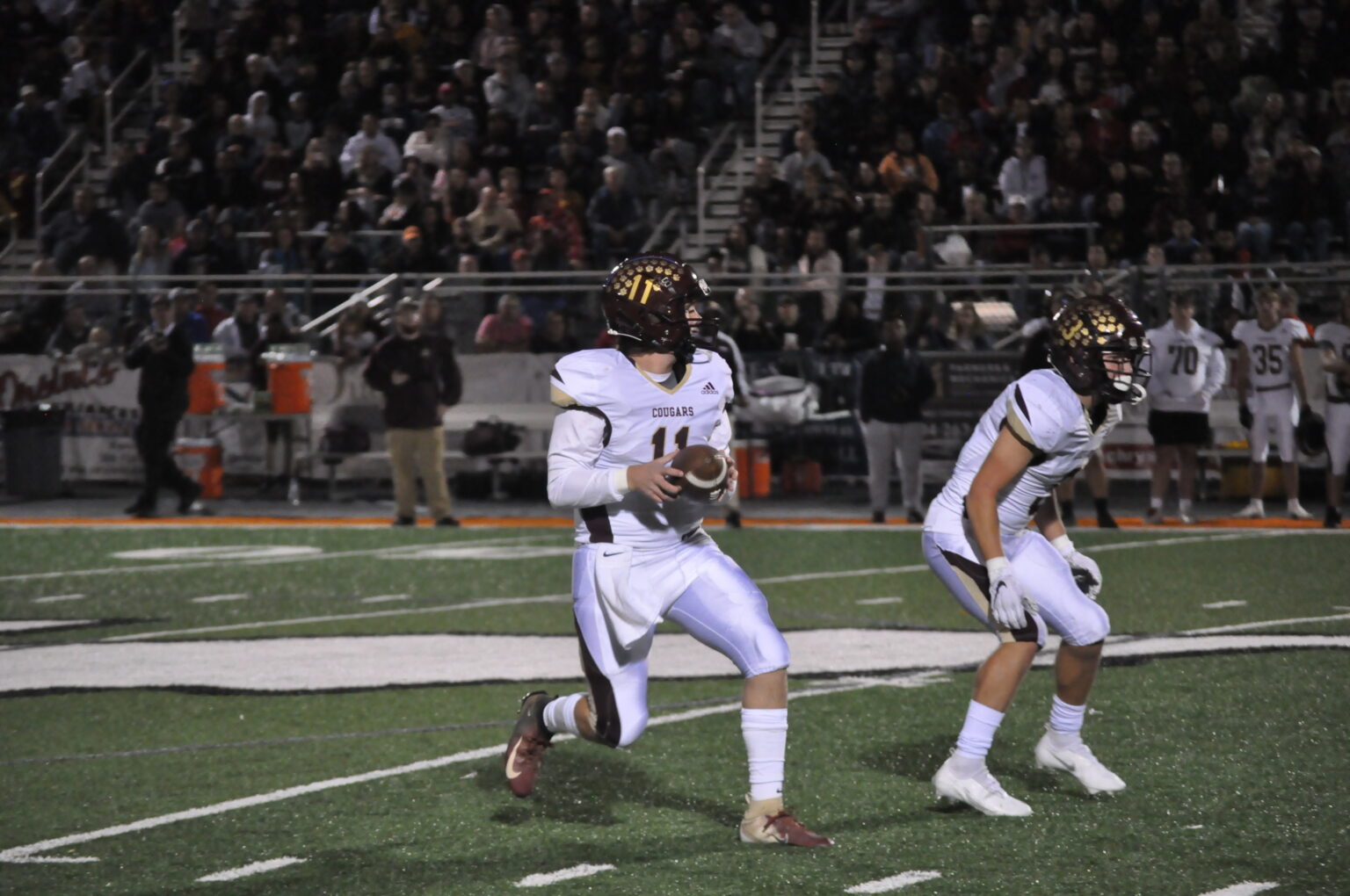 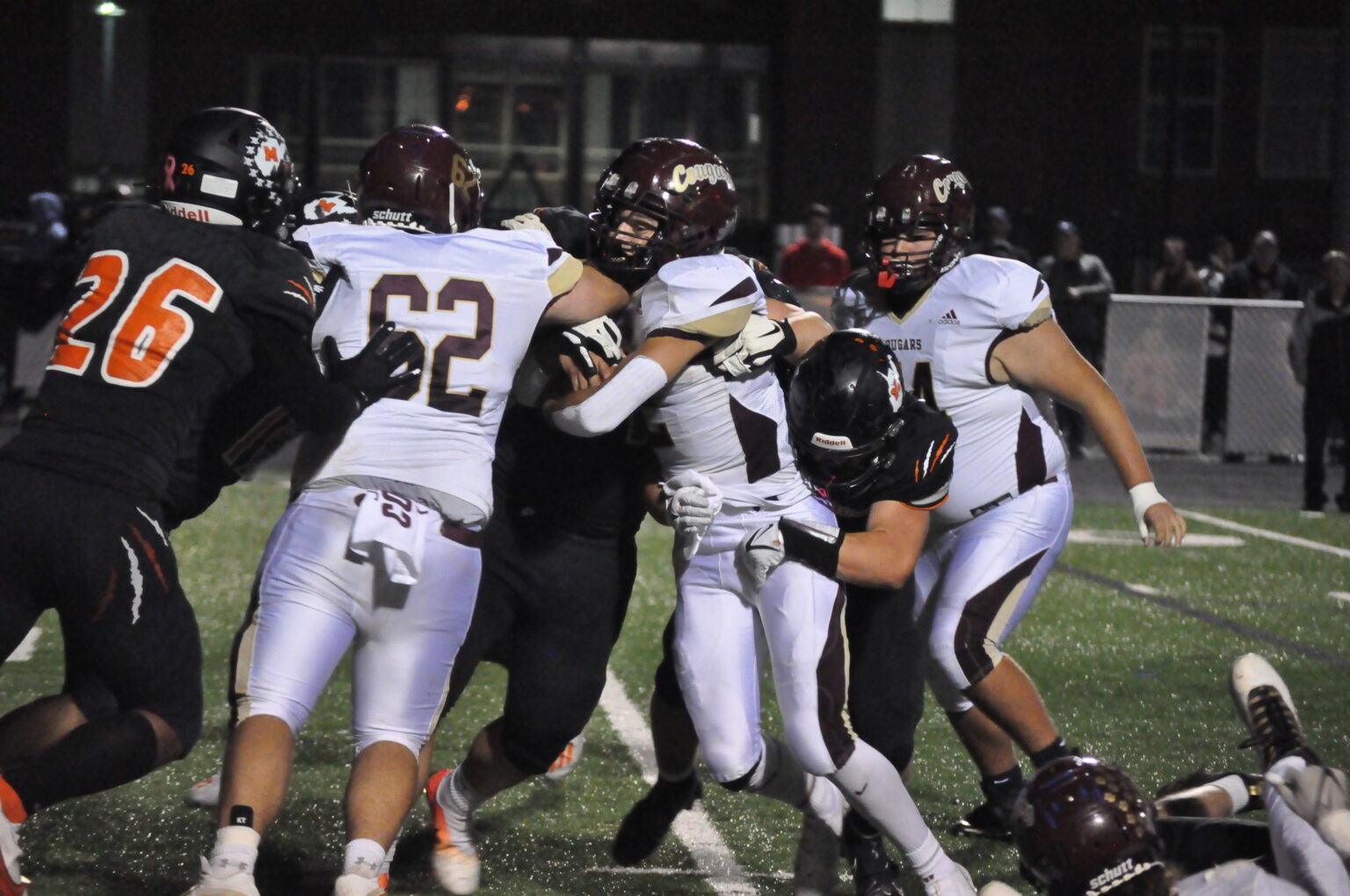 Martinsburg's defense records a tackle near the line of scrimmage. Photo by Greg Carey/WVMetroNews.com

The Bulldogs’ offense maintained its usual production against the Cougars, but the defense stole the show and moved Martinsburg one win from an unbeaten regular season with a resounding 42-3 victory at David M. Walker Stadium at Cobourn Field.

“We’ve played some really good teams, but they’re not West Virginia teams,” Martinsburg coach Britt Sherman said. “We’re trying to do well in the West Virginia playoffs, so to play a team that’s highly-ranked and do this well, the kids are excited about it. They came out and really played hard.”

No. 3 Jefferson (7-1) entered with 330 points — the third highest total among Class AAA teams — and had scored at least 33 in all seven games, but failed to reach the end zone in a contest it trailed for all but 2:17 of. The Cougars managed only 11 rushing yards in the setback and had trouble generating a push against the Bulldogs’ defensive front.

“Christian Slack, Jacob Barrick and Aydin Fleming, those three guys were really physical and controlled that line all night on the defense side,” Sherman said.

No. 1 Martinsburg (9-0) got an early 42-yard run by Murphy Clement, who finished off the opening drive with a 2-yard touchdown run to help give his team the early 7-0 lead.

The Cougars responded with their only points of the contest on Oren Humphreys’ 29-yard field goal, allowing them to trail by four with 7:02 to play in the opening quarter.

After the teams exchanged punts, the Bulldogs (9-0) put together a 98-yard scoring drive and overcame a holding penalty that negated Ezra Bagent’s 35-yard touchdown pass to Barrick by scoring on Bagent’s 28-yard pass to Hudson Clement. Murphy Clement ran in the two-point try to leave MHS with a 15-3 lead 9:38 before halftime.

A blocked punt set the Bulldogs up with a short field on their next series, and they cashed in with a 13 play, 45-yard drive and upped their lead to 22-3 on Murphy Clement’s 1-yard TD run, which is how the game went to halftime.

“We missed some opportunities, whether it be some passes deep that we thought we probably could’ve hit that could’ve changed the complexity of the game and how the game is played,” JHS head coach Craig Hunter said. “Maybe they do a few things different and maybe we do some things different after that. Maybe if we hit those big plays deep, it opens our running game a little more. We missed some opportunities and had some missed tackles early in the game. Not taking care of business like we had been.”

After stopping Jefferson on downs to start the second half, Martinsburg marched 68 yards in 13 plays and got a 10-yard pass from Murphy Clement to Hudson Clement for a 28-3 advantage at the 3:14 mark of the third quarter.

Murphy Clement added his third and final TD run from 6 yards on the opening play of the fourth quarter.

The Cougars were in prime position to score after Isaiah Fritts intercepted Bagent and returned it 32 yards to the Bulldogs’ 5 with just outside of 8 minutes to play.

But three Jefferson plays netted a loss of 1 yard, and Humphreys’ 23-yard field goal attempt was blocked and returned 87 yards by Kam Shallis for the game’s final touchdown.

“They were pressure-packed with us and it was going to be tough running the ball,” Hunter said.

Murphy Clement rushed for 112 yards on 22 carries, while Bagent completed 12-of-19 passes for 161 yards in another balanced effort for the Bulldogs.