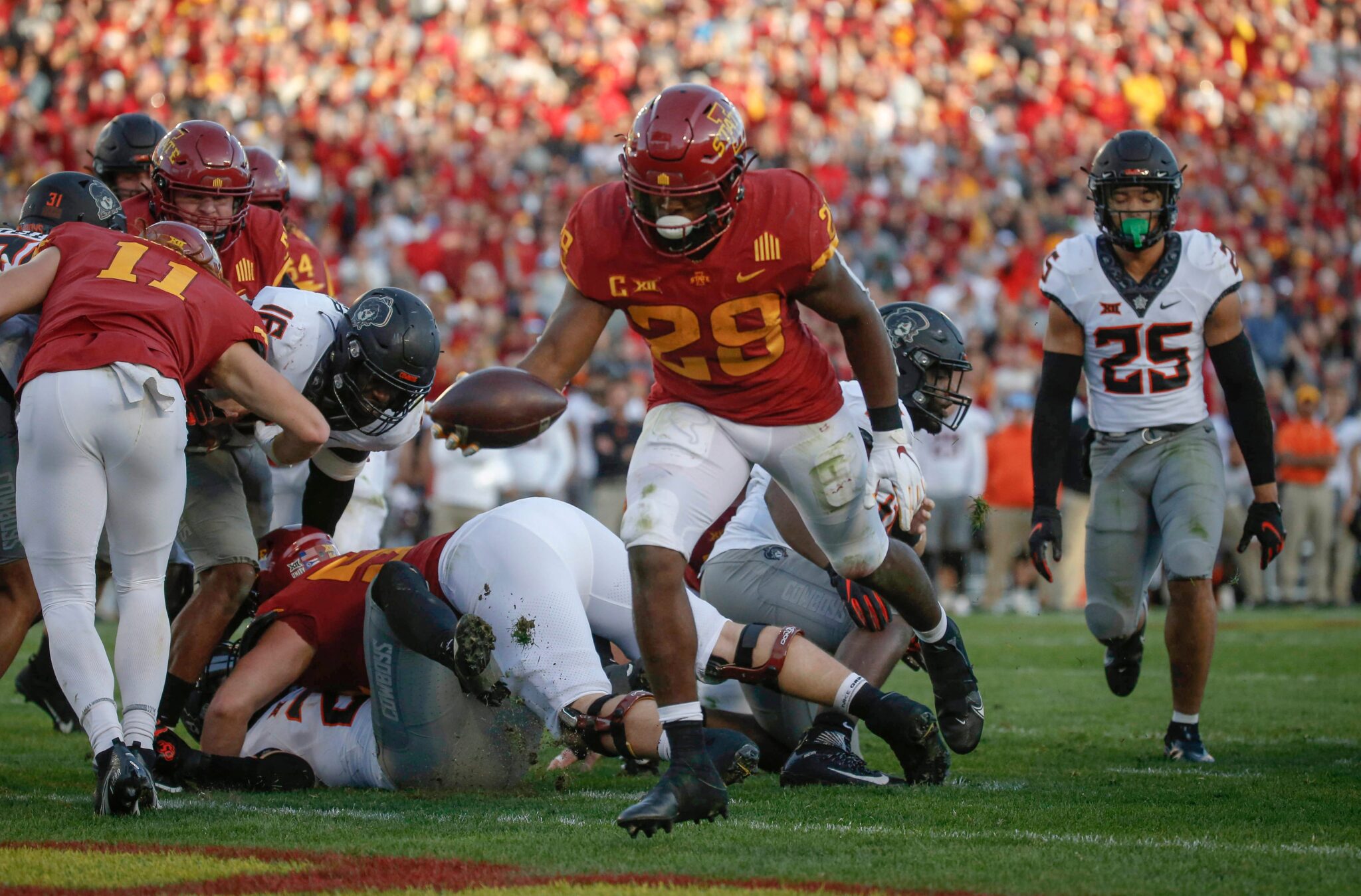 Iowa State junior running back Breece Hall runs into the end zone for a touchdown in the fourth quarter against Oklahoma State on Saturday, Oct. 23, 2021, at Jack Trice Stadium. Syndication: The Des Moines Register

MORGANTOWN, W.Va. — Iowa State junior running back Breece Hall has made a habit of feasting on opposing defenses in three seasons with the Cyclones.

That includes West Virginia, which struggled to contain Hall in its only two previous matchups with him.

With the Cyclones and Mountaineers meeting at 2 p.m. Saturday at Milan Puskar Stadium, Hall will again be a focal point of WVU’s defensive game plan.

“He’s been productive for all three years,” West Virginia head coach Neal Brown said. “You’re talking about a guy that’s probably in the Heisman Trophy race. He was last year. He’s playing his way into it this year.”

In Iowa State’s 38-14 victory at West Virginia in 2019, Hall, then a true freshman, racked up 132 yards and three touchdowns on 26 carries. Hall rushed for 97 yards and a touchdown and caught three passes for 56 yards and another score last season as the Cyclones romped their way to a 42-6 win over the Mountaineers.

The Wichita, Kansas native came into the 2021 campaign with 2,469 rushing yards over this first two seasons. Hall’s 1,572 rushing yards led all of college football a year ago and his 21 rushing touchdowns were second to Alabama standout and current Pittsburgh Steelers tailback Najee Harris.

Hall has a chance to surpass his rushing total from last season. He comes to Morgantown as college football’s 11th leading rusher and second in the Big 12 Conference with 818 yards and 11 touchdowns on 155 carries.

“He’s really patient,” WVU defensive coordinator Jordan Lesley said. “He holds and then he accelerates through the seam or gap that he has. He’s as good as anybody at the speed of that and breaking tackles, keeping his shoulders square and getting downhill. Normally a guy like that is strictly a power guy, but Breece is good in space.”

Hall had four consecutive 100-yard performances until being held to 70 yards on 21 carries during the Cyclones’ 24-21 victory against previously unbeaten Oklahoma State last Saturday.

He was also limited to 69 yards in each of the team’s first two games against Northern Iowa and Iowa, before beginning the streak of 100-yard performances, which also included two rushing scores in all four games.

Brown noted the Cyclones also have one of the better offensive lines in the Big 12, which has allowed Hall to become one of the sport’s better tailbacks.

“Their offensive line really comes off the ball,” Brown said. “They’re physical and they do a really good job as a cohesive unit of doing what they’re asked to do.”

West Virginia sophomore defensive lineman Akheem Mesidor has been one of the team’s top performers through the first seven games.

But Mesidor suffered an injury last Saturday in the Mountaineers’ 29-17 win at TCU, though Brown indicated it’s not one that will cause him to miss time.

Cornerback Nicktroy Fortune was hurt in the first half against the Horned Frogs, and he and tight end Mike O’Laughin aren’t as certain to play against Iowa State.

“They’re leg injuries, so you kind of wait and see,” Brown said. “We had three go down. Two of them will be Saturday calls and then Akheem is fine. He practiced [Monday]. The other two will go down to the weekend.”

However, since Campbell’s second season with the Cyclones in 2017, Iowa State is 37-21 overall and 27-14 within the conference.

ISU has won 16 of 18 games in October since 2017, while senior quarterback Brock Purdy has compiled a 12-2 career mark that month.

Setbacks to Oklahoma State in 2019 and 2020 are the Cyclones’ only losses over that time frame.

“We’re catching them playing their best football of the year,” Brown said. “They’re a team that gets better. Much has been said about their October record, but it was a big win on Saturday versus Oklahoma State for them. A lot of respect for what coach Campbell and his staff have done there.”