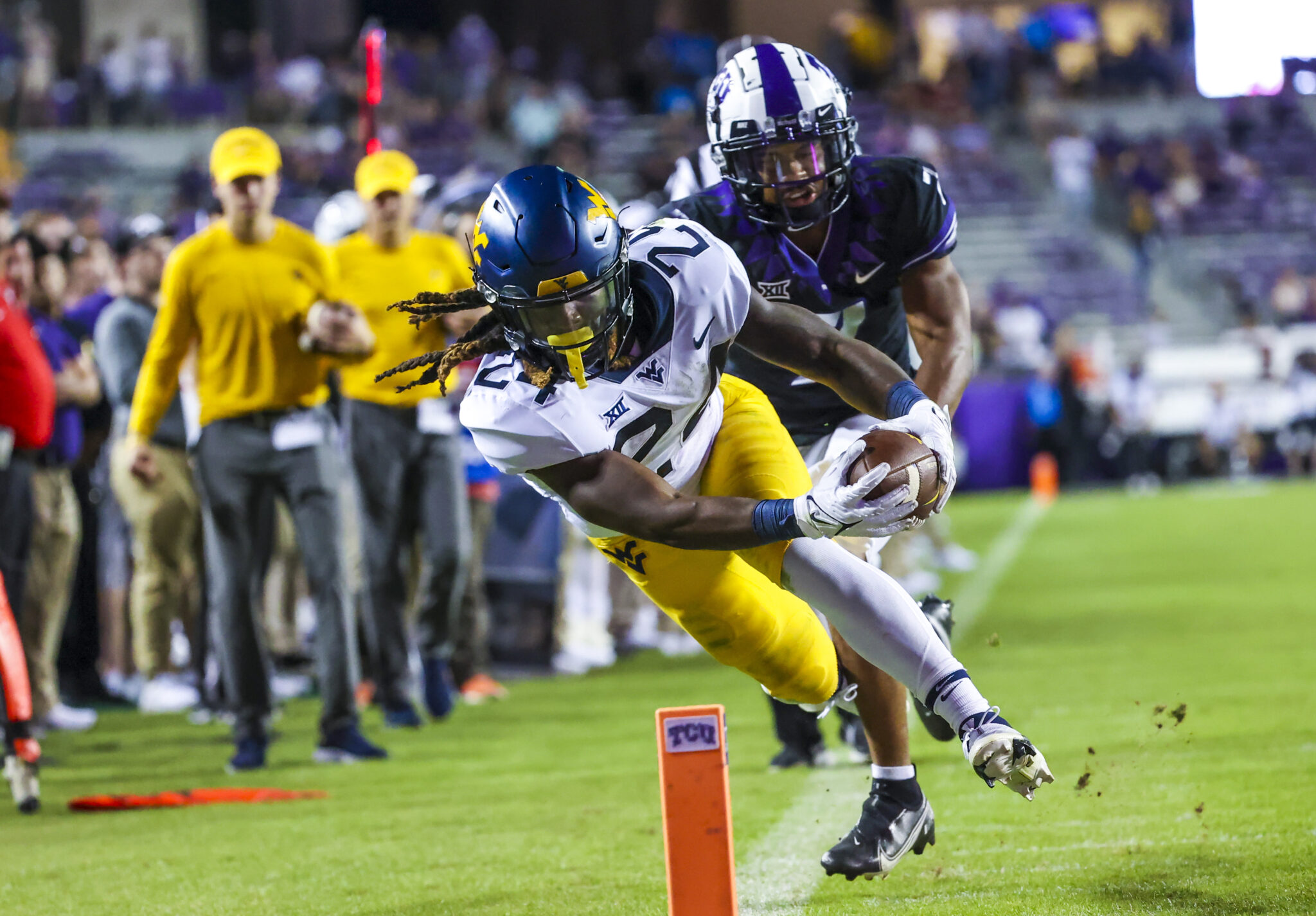 MORGANTOWN, W.Va. — Along the way to its best showing of the season in last Saturday’s 29-17 win at TCU, West Virginia not only kept alive legitimate bowl aspirations, but hopes it discovered solutions in several areas that plagued the Mountaineers over their first six games.

A defense that had struggled to generate takeaways came up with all three of the game’s turnovers in the second half, enabling WVU to build on its three-point advantage and blank the Horned Frogs over the final two quarters.

An offense that had failed to produce 100-plus rushing yards in three straight contests and four of six overall got its ground game in gear with a season-best 229 rushing yards.

Featured tailback Leddie Brown had nearly half of that output with 111 yards and three touchdowns, but for the first time this season, the Mountaineers had another reliable option in  the backfield outside of second-string quarterback Garrett Greene.

Sophomore running back Tony Mathis Jr. finished with 12 carries for 48 yards after entering with 25 yards on nine attempts.

“Tony stepped up,” WVU quarterback Jarret Doege said. “He took some hits off Leddie and I’m really glad to see him shine on Saturday, because he is one of the hardest workers on our team.”

Mathis had runs of 10, 7 and 5 yards on a 15 play, 94-yard drive that featured 10 runs and ended with Brown scoring his first of the team’s three TDs.

“Tony Mathis came in and gave us some quality snaps where [Leddie] felt OK taking a break, which hadn’t been the case up until this point this year,” West Virginia head coach Neal Brown said.

Prior to his performance against TCU, seven of Mathis’ nine carries this season came in a 66-0 win over Long Island.

Although West Virginia’s coaches were hopeful Mathis, a redshirt sophomore, could spell Brown somewhat consistently this season, that hadn’t been the case until the team’s seventh game.

An injury in preseason camp forced him to miss the season opener at Maryland, and Mathis was also not in action during the team’s loss to Texas Tech in its only home game in Big 12 Conference play to this point.

“Just happy for him, because we really felt like going into the year that’s what he deserved and had gotten himself to as a player,” WVU offensive coordinator Gerad Parker said. “It was unfortunate he kind of had a setback with the injury. It took him some time to get there. Before having to get a little work done there, that’s how he was running.

“Really just happy for him to get to that point where he was running like he was during fall camp. He had earned that right. The players and guys around this building respect him a lot, so it was good for him to get that moment.”

West Virginia’s coaching staff also displayed no shortage of faith in Mathis down the stretch. With WVU leading by 12 and attempting to preserve the victory, Mathis had six carries for 18 yards on the Mountaineers’ final offensive series, allowing them to take off nearly 4 minutes of the 5:15 that remained at the start of the possession.

One of Mathis’ six totes on the final series was a gain of 17 to the TCU 2, but a holding penalty on wide receiver Sean Ryan turned it into a 4-yard run and moved the ball back outside the red zone.

Still, that half of Mathis’ 12 carries came with West Virginia trying to keep the ball away from TCU in the late stages was a display of confidence in him from both Neal Brown and Parker.

“We all have to trust each other we’re working in the right direction and have faith,” Parker said. “Even though the result sometimes it wasn’t what we want, that doesn’t mean we still can’t believe in him. It was a good message for him. I gave Sean a hard time. I’m not being mean, but he took away a moment from him. That’s why our perimeter blocking is crucial.

“You talk about [what could’ve been] a cool moment for us to finish a 4-minute and change drive and end it in a touchdown, but we really did a nice job. Tony ran hard, and we really strained and took 4 minutes off the clock at the end of the game, which was good to see.”