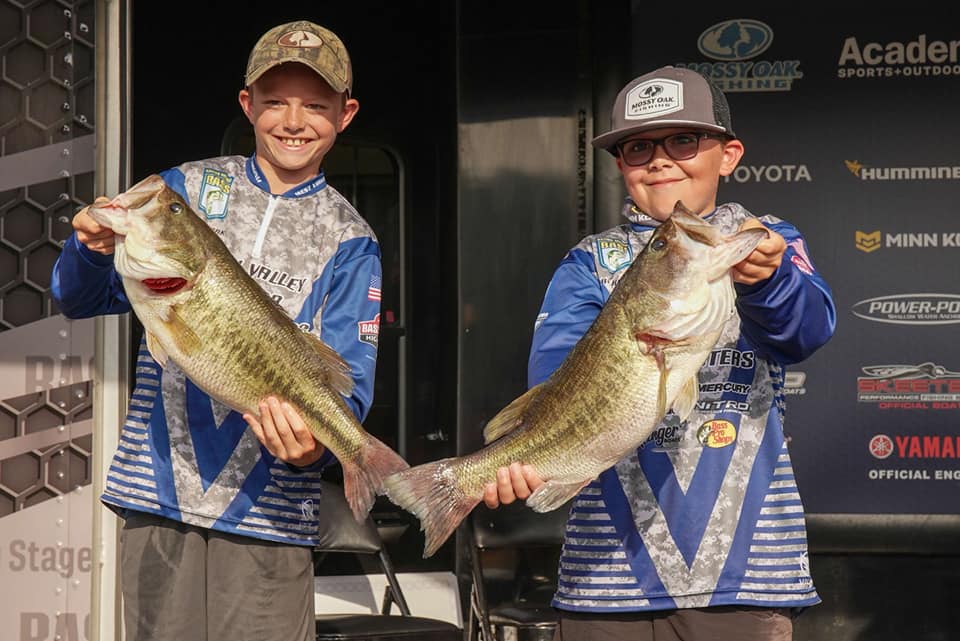 Ari Clark (L) and Bo Hollen (R) show off a couple of their best keepers from the B.A.S.S. Junior National Championship

BUCKHANNON, W.Va. — You might think fishing in a national youth fishing tournament would be an unnerving event for somebody who is 11 or 12 years old. However, Bo Hollen of Buckhannon and Ari Clark of Winfield were in a complete comfort zone.

The two fishing buddies who have been three year partners are no strangers to success. Bo is 11 and Ari is 12. They hooked up three years ago when Bo first qualified for the junior state championship and needed a partner. Turned out, Ari was also in search of a partner.

“The first time we met Ari was at the ramp during the state championship three years ago,” said Dustin Hollen, Bo’s dad and the boat captain for the duo.

Since then, there’s been no holding back this tandem who now lay claim to a national championship.

Bo and Ari qualified as one of the teams to represent West Virginia in the B.A.S. S. Junior National Championship October 8th and 9th on Carrol County Lake in Huntingdon, TN. This was actually their third time fishing the event. They won the 2021 event with a total weight of 19 pounds and 11 ounces of bass over two days, but the real story was their second day.

“The first day we didn’t get many bites, but in the last hour, we found a point in about 25 feet of water and we caught four keepers, so we decided to stay in that spot the second day.” Ari explained during a conversation on West Virginia Outdoors.

The boys used a variety of soft plastics, slowly retrieved on Carolina rigs to catch the fish. The four keepers on day one weighed 3 pounds and 8 ounces and put them in 28th place among 62 boats.

Day two, they were boat #11 out of the dock–and were the second boat to arrive on their chosen spot. Bo had a pretty good feeling about the place.

“The day before we saw a guy lose a 10 pounder there,” he explained.

It didn’t take long for them to realize they made the right choice. Dustin, the boat captain, recapped how the morning unfolded after the boys started fishing at 7 a.m.

The eight pounder, as you would imagine, got everybody’s heart pumping.

“I thought I had a catfish, but when he jumped I said, ‘That ain’t no catfish.'” Ari said.

“I’m surprised I didn’t walk off the edge of the boat telling him to keep the line tight. I told Bo to get the net because I can’t help them. But Ari brought it in just fine and Bo got it in the net and when we got it in the boat I’m surprised ya’ll couldn’t hear us all squalling all the way up there in West Virginia,” Dustin said.

Bo admitted he was a little nervous about his netting work….Ari admitted he also had concerns.

“Bo, I like you man, but yes I was a little worried about it.” Ari laughed.

The creel was the biggest sack weighed in the two day tournament and gave Bo and Ari the trophy at the weigh-in later in the day. Older competitors, many of them in high school, could only watch as two middle schoolers took them to fishing school.

“I was screaming. It was one of the best days of my life,” Ari said.

Chances are the way these two fish together–there may be better days ahead for both junior anglers in the world of competitive bass fishing.