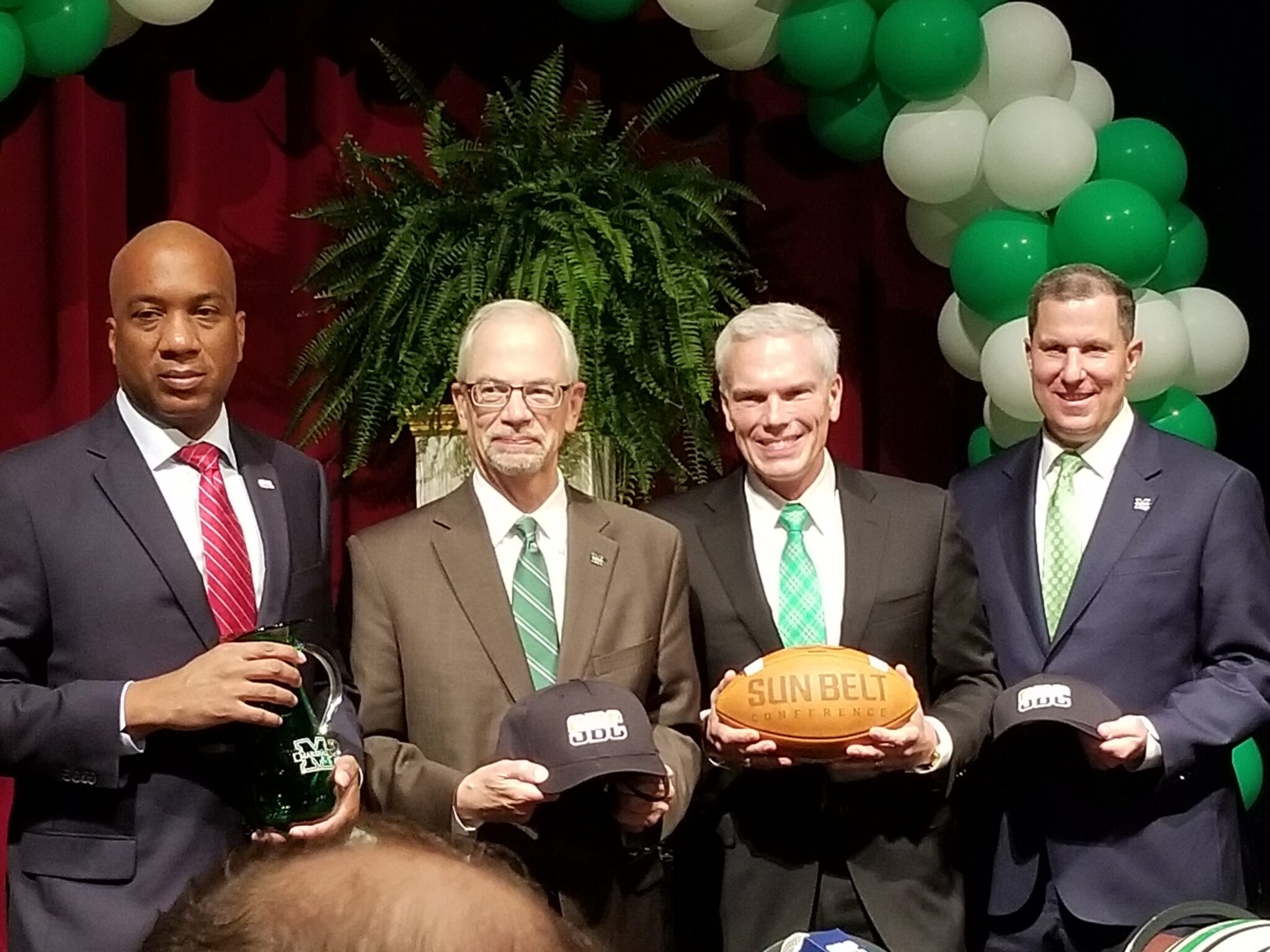 Sun Belt Commissioner Keith Gill was on hand for a press conference at the Joan C. Edwards Performing Arts Center to welcome the Thundering Herd.

MU President Jerome Gilbert, President-elect Brad Smith and Interim Director of Athletics Jeff O’Malley also spoke of their excitement about Marshall joining the league, which will happen no later than July 1, 2023.

The university’s Board of Governors made the decision official Monday in an emergency meeting.

At 10:06 a.m., Gill announced Marshall had officially accepted its invitation to join the Sun Belt during his opening remarks.

“We knew this institution could add value to our conference and Marshall does just that,” Gill said. “Think about two national championships in football, 17 bowl appearances and winning 75 percent of those games is pretty impressive and tracks with the Sun Belt’s success as well. Men’s basketball is important and you advanced to second round of the NCAA Tournament in 2018.

“Marshall academics fits the Sun Belt’s mission in values and goals. As we stand here today, the Sun Belt got stronger.”

The Thundering Herd announced their intention to leave behind Conference USA for the Sun Belt last week, following a similar path to Southern Mississippi and Old Dominion, which did the same days earlier.

James Madison may also join the Sun Belt in the near future as it potentially works its way from the FCS level in football.

“Marshall is the most uniquely positioned school in conference alignment. We’re thrilled with the fit we found in the Sun Belt,” O’Malley said. “Conference USA was a great fit for Marshall, but now it’s time to turn the page.”

The Sun Belt is currently a 12-team league with 10 football members.

“At Marshall, we’re always looking to the future with excitement and hope,” Gilbert said. “The goal for over a year was to position Marshall to have a play at regional opportunities and rivalries.”

The Sun Belt does not currently have men’s soccer. With the Herd’s men’s soccer program having won the national championship last season, that was a talking point in realignment discussions.

Gill said men’s soccer will become a conference sport in the near future.

“We’ll start it as soon as practical,” Gill said. “We’ll probably file the paperwork in February to make sure we’re ahead of the game, but we’ll be ready to go as soon as all the men’s soccer members transition in and the three core members will transition in, as well.”

Over the remainder of the time it remains a C-USA member, Marshall will not receive any of the league’s revenue distribution, meaning the Herd will forfeit roughly $3 million.

While the Sun Belt waived its entry fee, Marshall will pay $80,000 on an annual basis as league dues.

One of the major attractions in joining the Sun Belt is the league’s media rights deal with ESPN that runs through the 2030-2031 academic year.

“Get used to these four letters — ESPN,” O’Malley said. “The answer to the question of what channel is Marshall on just got easier. This is our best fit from a long-term financial perspective.”

Marshall officials also spoke of the positive feedback they heard in regards to joining the Sun Belt from the school’s fan base before and during last Saturday’s home football game against Florida International.

“At the end of the day, there was an obvious answer and that answer is where we are today,” Smith said. “I couldn’t walk anywhere Saturday in Joan Edwards Stadium and not have people coming up to me excited about the news.

“I’ll end with this. As John F. Kennedy said, ‘the sun doesn’t always shine in West Virginia, but its people do.’ Wait til you see us shine when we join the Sun Belt Conference.”