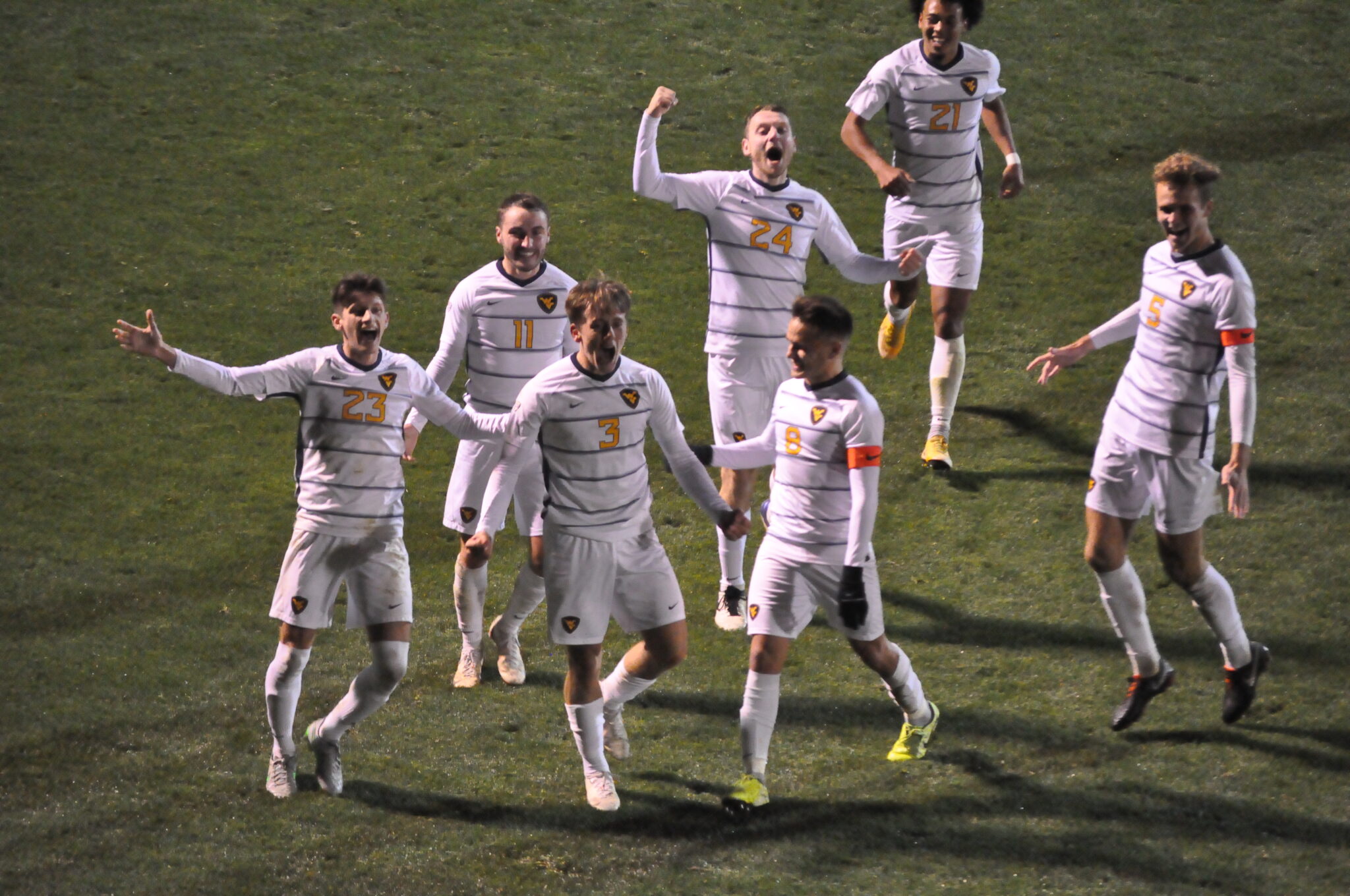 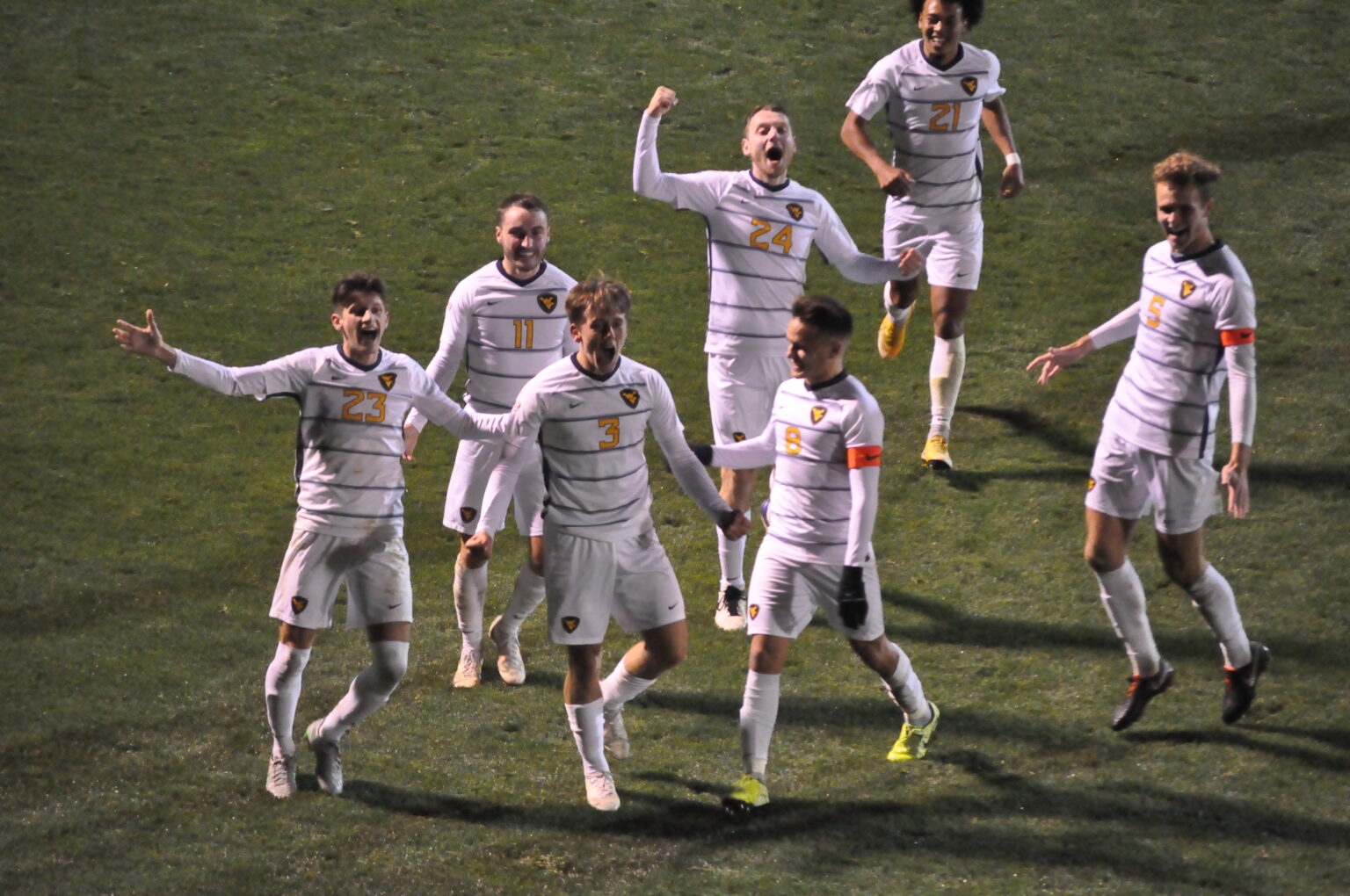 West Virginia celebrates one of its two goals during a win over Bowling Green. Photo by Greg Carey/WVMetroNews.com 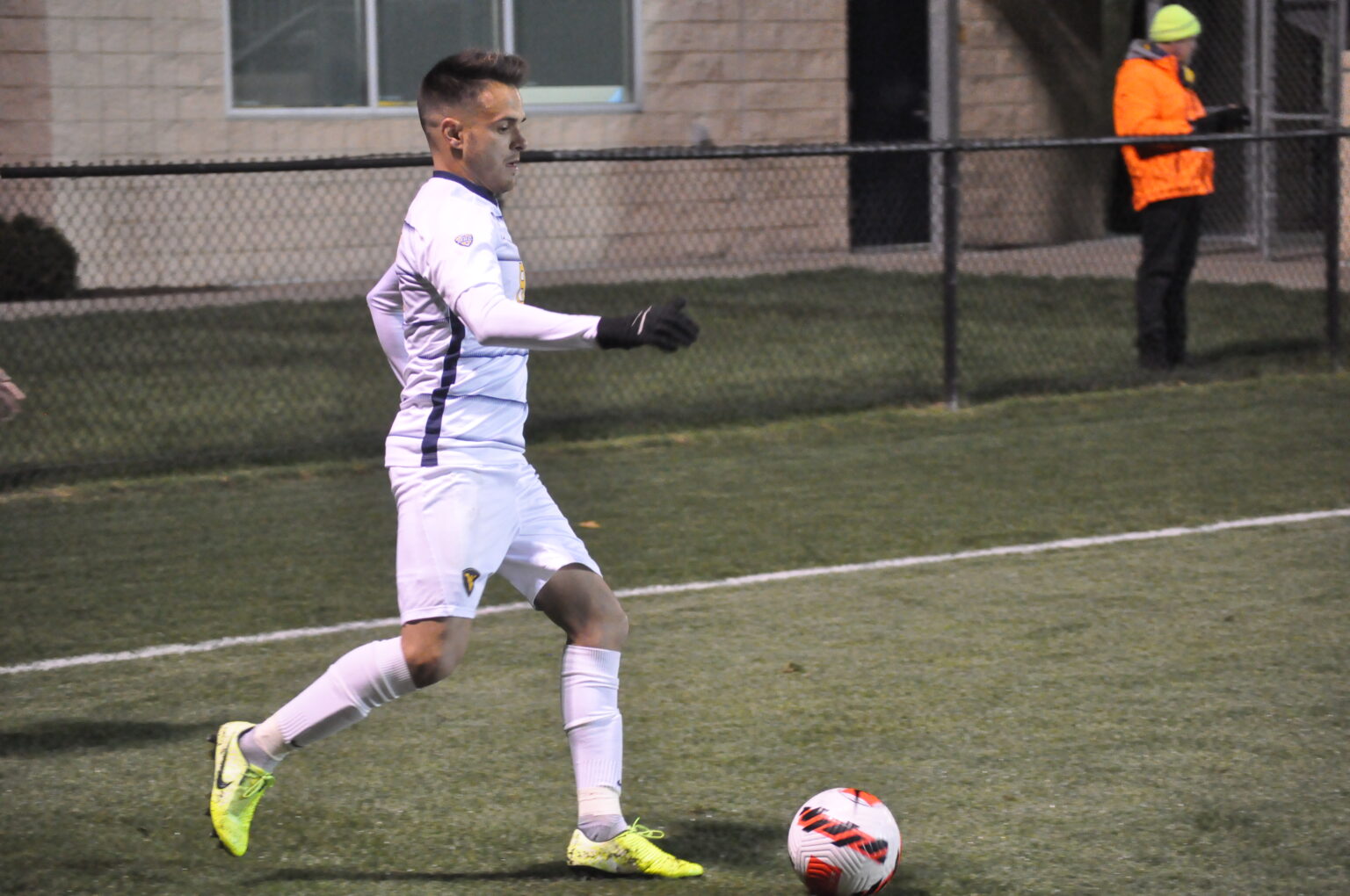 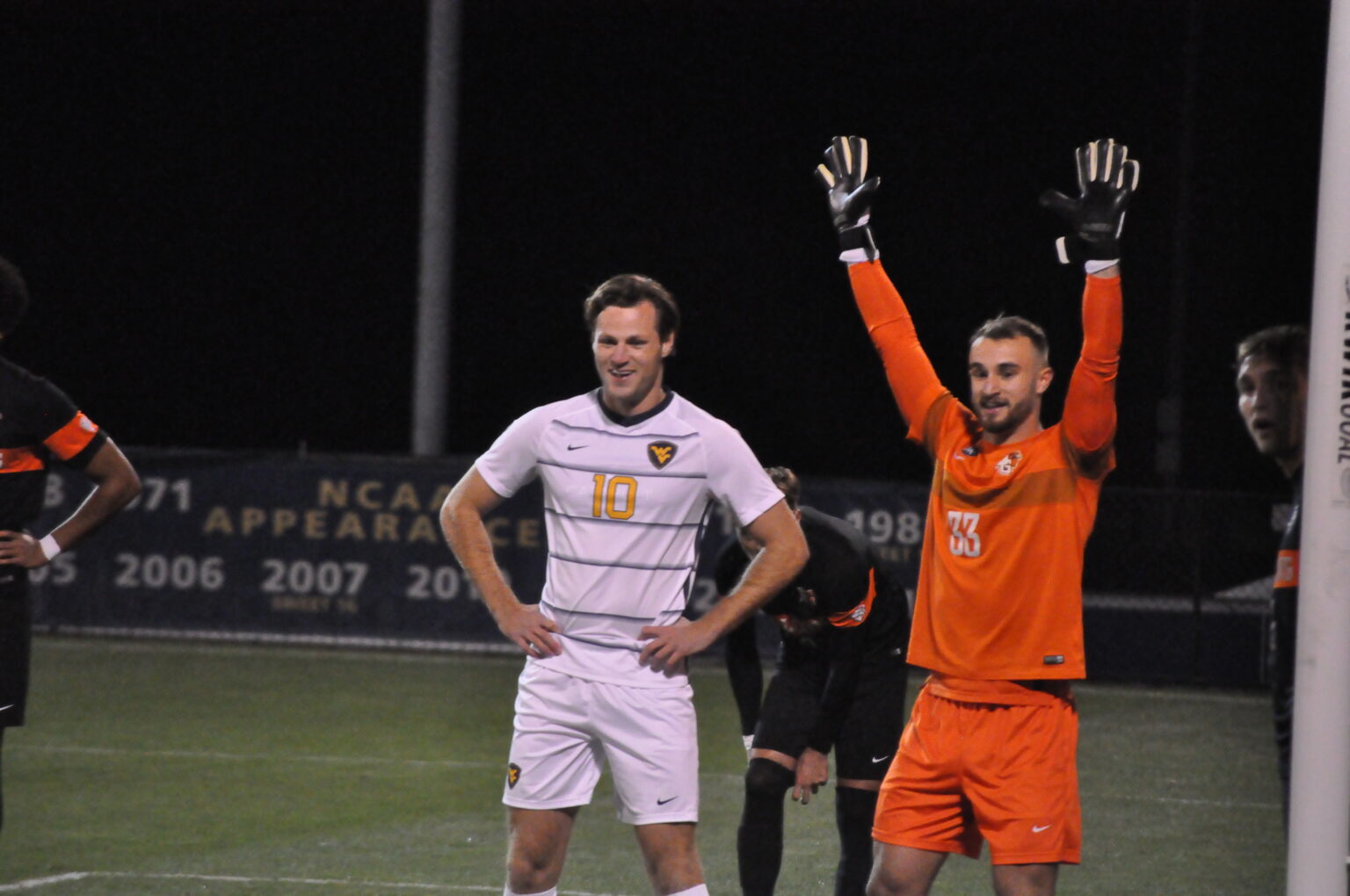 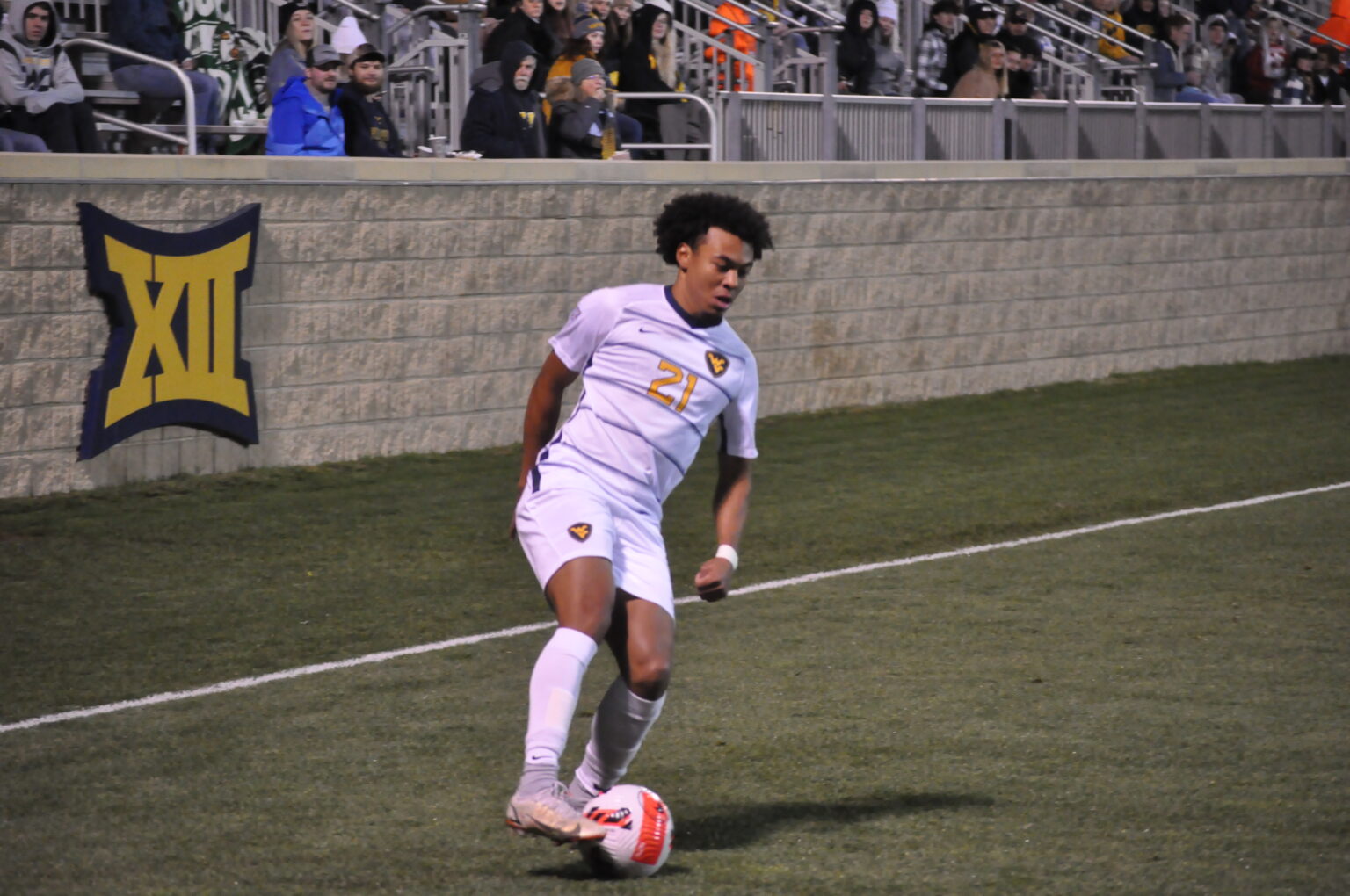 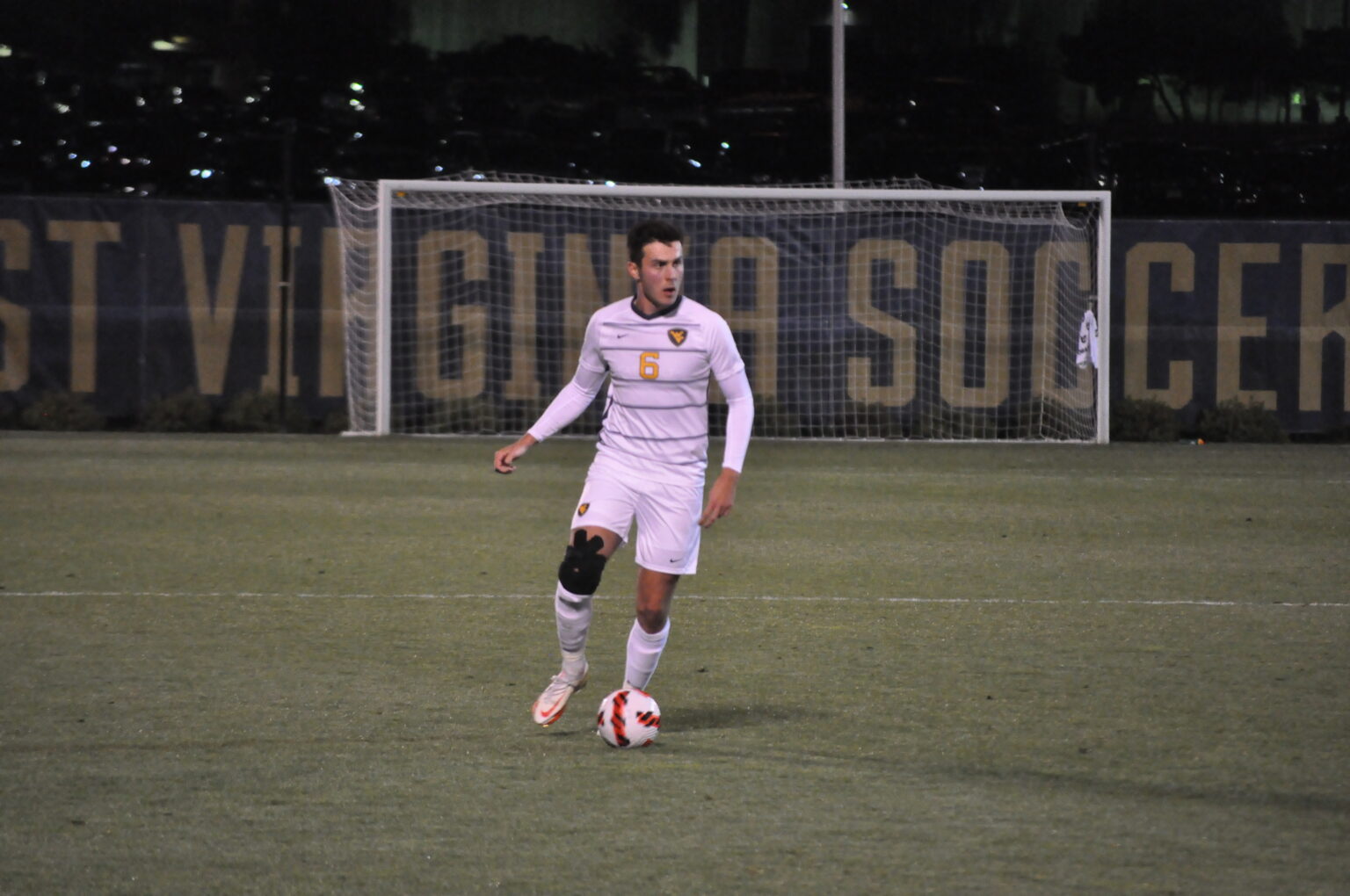 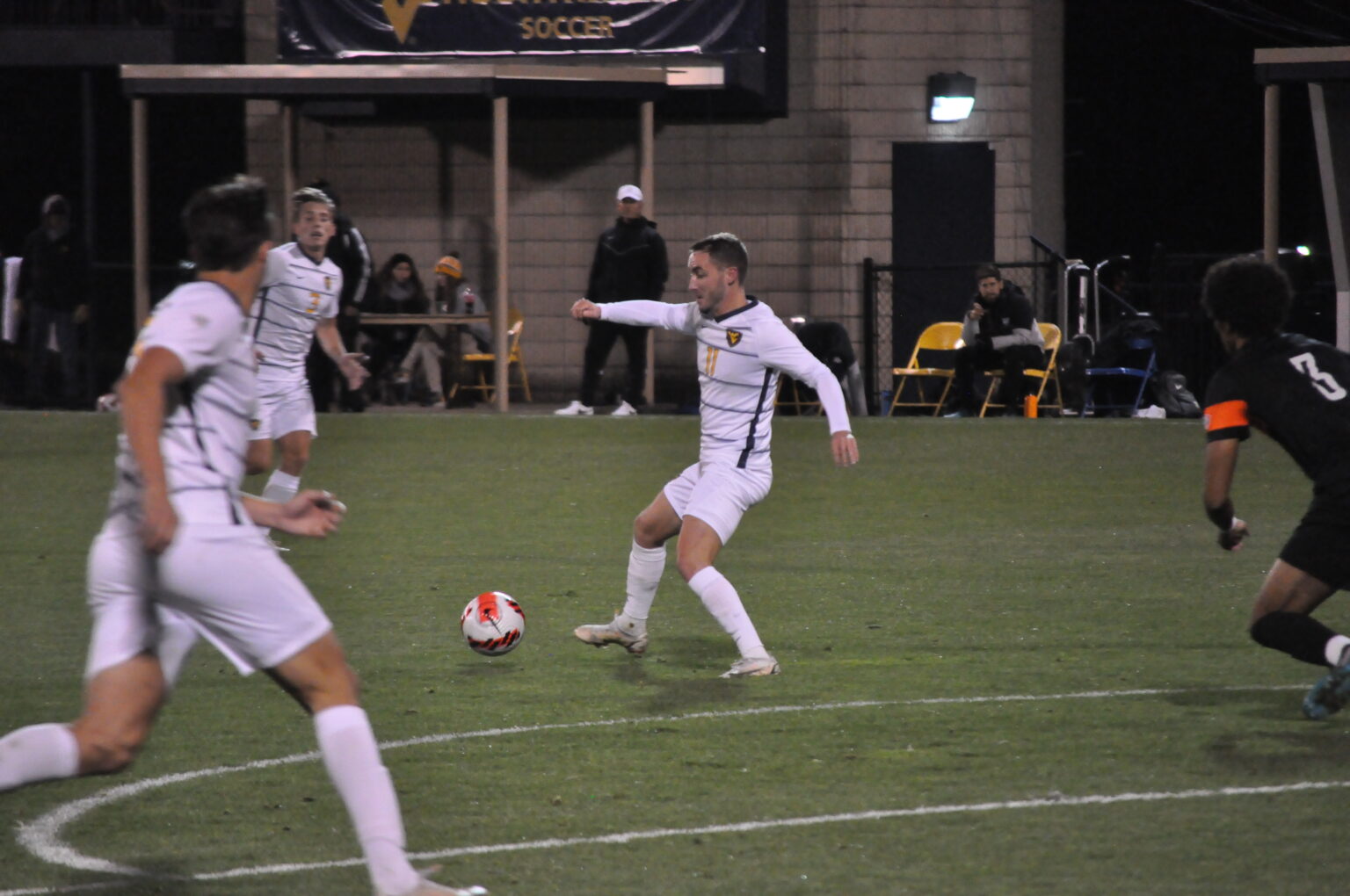 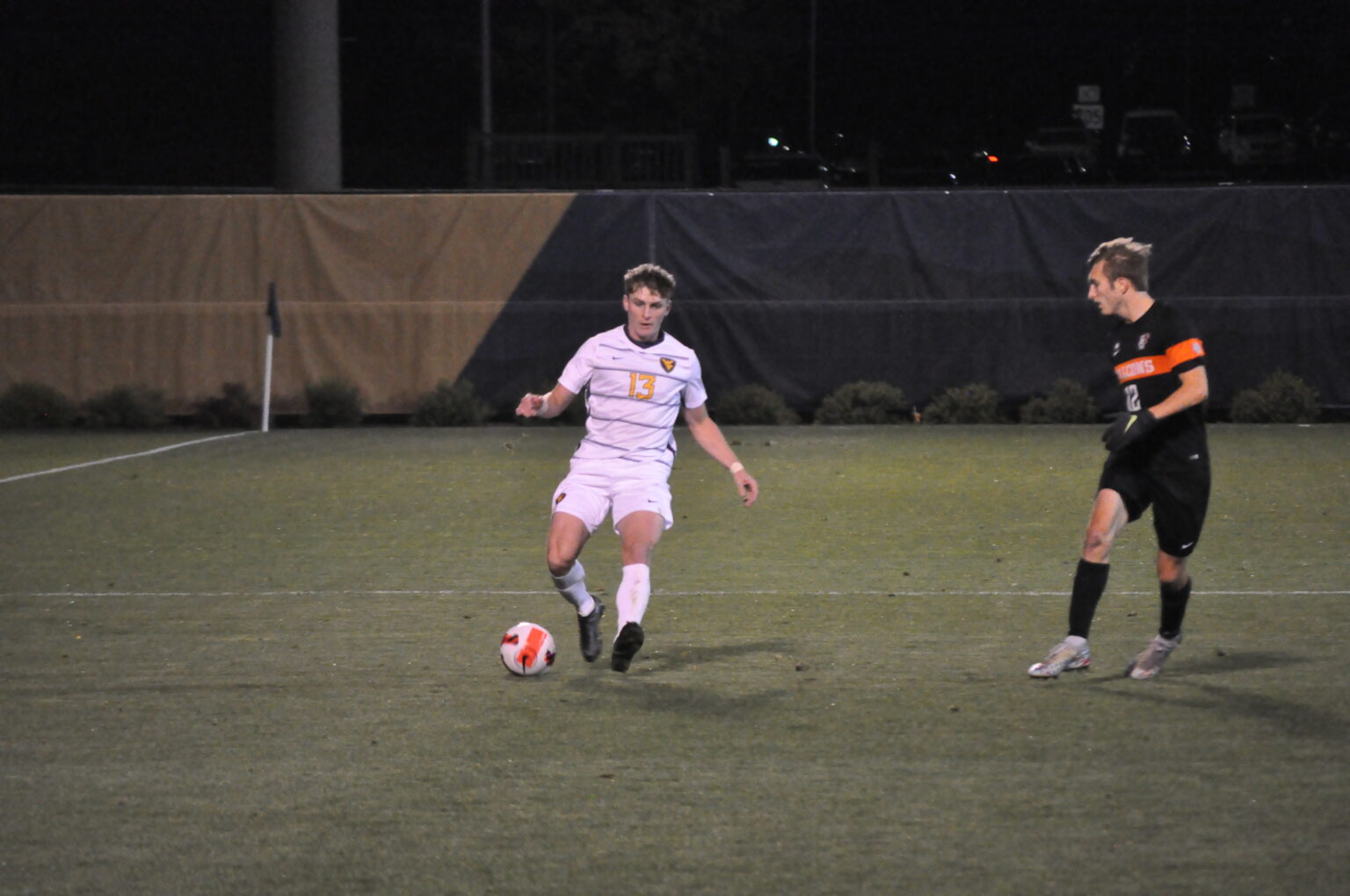 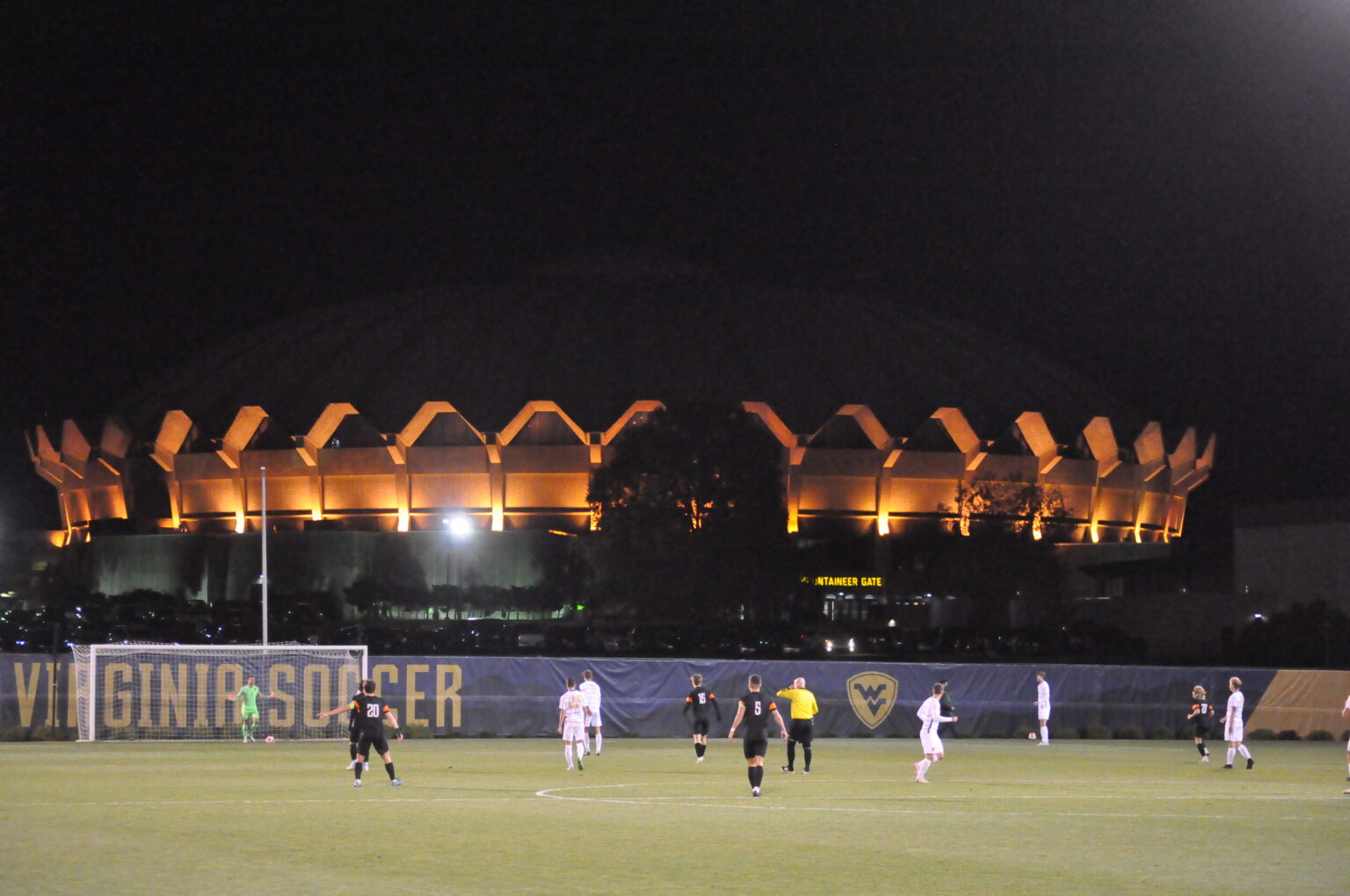 The Coliseum was lit up as WVU and Bowling Green battled. Photo by Greg Carey/WVMetroNews.com 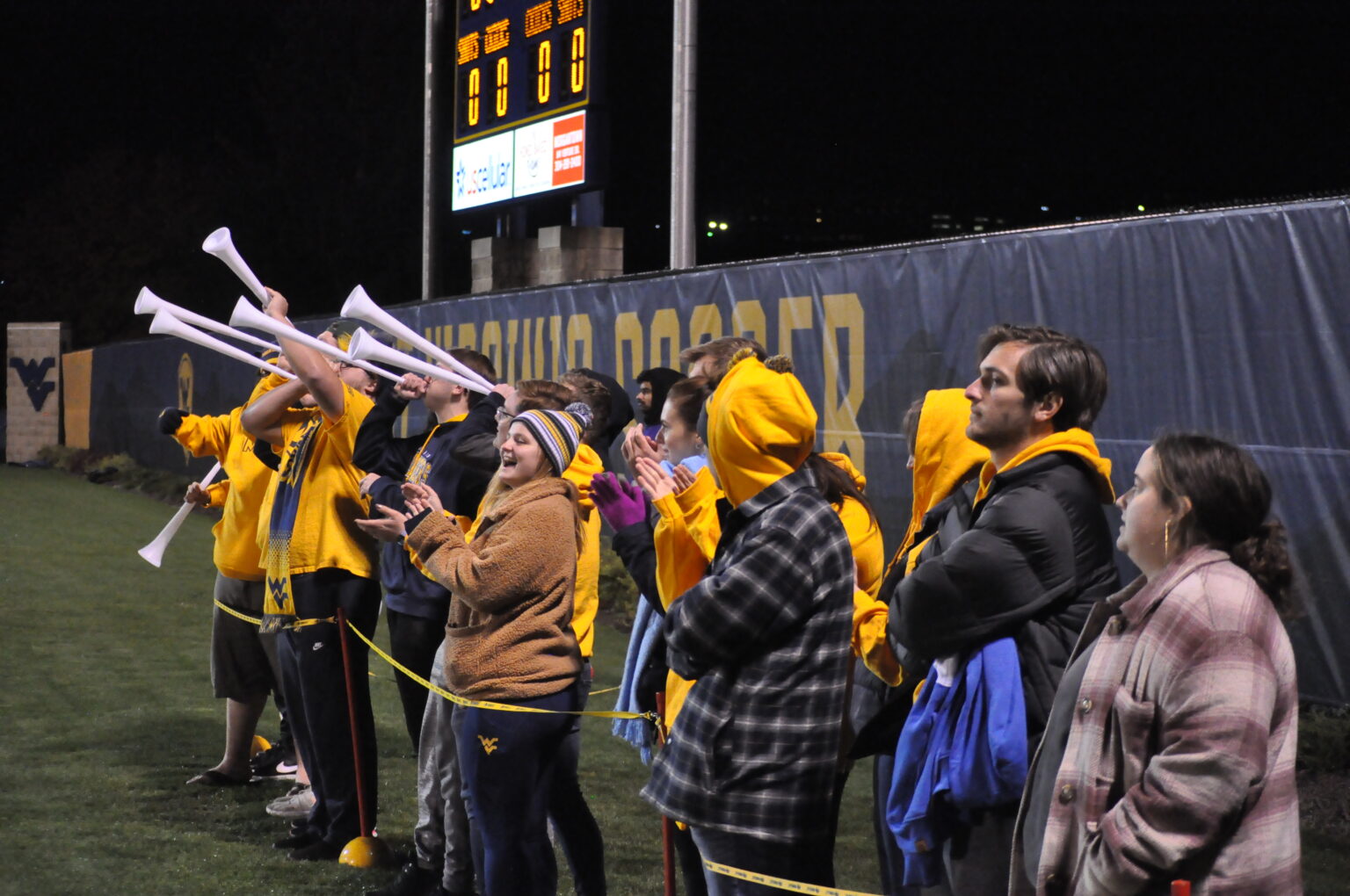 MORGANTOWN, W.Va. — With a 2-0 victory over Bowling Green on Thursday at Dick Dlesk Soccer Stadium, West Virginia accomplished more than wrapping up its regular season with a victory in Mid-American Conference play.

The Mountaineers secured the No. 2 seed in next week’s MAC Championship and sent five seniors out on a winning note in their final regular season home game. WVU also finished off an unbeaten regular season at home for the first time since 2006, and perhaps most importantly, bolstered its case for a national seed in the NCAA Tournament with a quality victory after entering the match with a No. 17 RPI.

“They’ve certainly given themselves the platform to guarantee that if we win on Thursday now as well,” WVU head coach Dan Stratford said. “Our sights are set on winning a conference tournament, but the reality of today’s win is I think we’re an absolute guarantee that we’re going to be in the national tournament, which is huge.

“I think we sneak into the top 16 in the RPI. We have to be ranked next week. At that point, we’re very much in the conversation for hosting another game in the NCAA Tournament and this doesn’t have to be senior night for them. We can earn the right to play here again and I think they’ve done that with a win tonight.”

Falcons’ goalkeeper Brendan Graves made the only first-half save as both teams struggled to generate quality scoring chances. West Virginia (11-2-4, 4-1-1) had a number of shots blocked by Bowling Green (10-4-3, 2-2-2) defenders, but overcame a sluggish start that saw the Falcons limit the Mountaineers from getting much toward Graves.

“This is a difficult team that we played, quite unique in some of the things they do tactically,” Stratford said.

Just over 15 minutes into the second half, West Virginia struck first when Luke McCormick followed up his initial shot by scoring on a rebound. McCormick took advantage of a cross from Ryan Crooks, who set up the initial shot seconds before the junior notched his third goal of the season at the 60:15 mark.

WVU needed only 1:14 to double its lead. Ryan Baer found a crease and fired a shot off the post, before Frederik Jorgensen found himself in perfect position and scored on the rebound.

“The adjustments we made at halftime were very well executed in the second half,” Stratford said. “The game was played where we wanted it to be played. We had moments in transition where we looked dangerous and good possession and good spells. Based on the way the second half went, we absolutely deserved to win the game”

The Mountaineers finished with six shots on goal as Graves made four saves in defeat.

WVU senior keeper Steven Tekesky stopped a pair of Bowling Green shots in the second half.

It marked the eighth time the Mountaineers blanked the opposition this season as they improved to 8-0-2 on their turf.

“We did a much better job of executing and finding those solutions quicker, which allowed us at times to turn the corner and be driving into their half with a lot of pace and a lot of numbers,” Stratford said. “That’s dangerous. They play a high risk, high reward style of football and we were able to turn it into more high risk than high reward, especially in the second half.”

In its first match of the MAC Championship, WVU will battle No. 3 seed Georgia State on November 11 in DeKalb, Illinois. The Panthers defeated Georgia Southern, 2-1, Thursday to pass Bowling Green in the league standings.

Sports
West Virginia falls short at No. 15 TCU, 76-72
The Mountaineers missed out on a golden opportunity, trailing for the final 35-plus minutes as the Horned Frogs evened the season series despite playing without their leading scorer.
By Greg Carey
Sports
Poca posts wire-to-wire win over Ravenswood, 53-39
The Dots were led by Kambel Meeks' 16-point effort in one of their best performances of the season.
By Joe Brocato
Sports
With Smith set to return, Mountaineers brace for matchup with No. 24 Texas
West Virginia will get starting point guard Madisen Smith back from a one-game absence, but a tough test awaits in the Longhorns, who arrive in Morgantown atop the Big 12 standings.
By Greg Carey
Sports
WVU to face all four Big 12 newcomers in 2023
The Big 12 Conference released the 2023 football schedule for all 14 teams on Tuesday.
By Joe Brocato