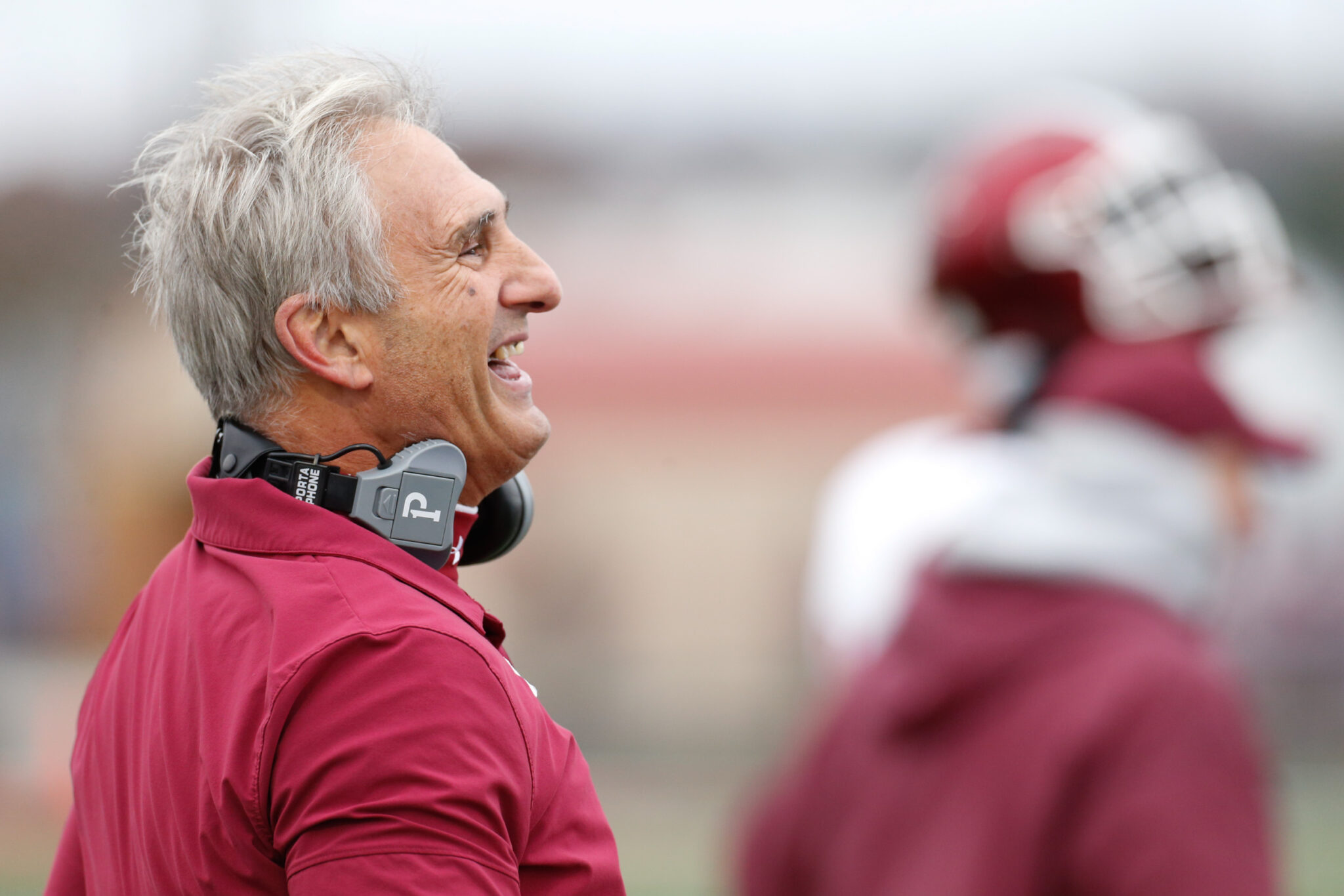 MORGANTOWN, W.Va. — Seven high school football quarterfinal matchups will be played Friday and five more games on Saturday will set the field for the semifinals. Check out the schedule for the weekend here.

Two of the Class AAA quarterfinal games are regular season rematches. Huntington is seeking their second win of the season over George Washington. The Highlanders defeated the Patriots 30-14 on September 17.

“Billy [Seals] has got a great club. He is doing a great job with them and they believe in themselves. They are playing really hard and they are playing, from what we have seen on film, mistake-free. They play fast, hard and they are very talented. We’ve got a lot of work to do if we are going to give them a go for it,” said George Washington head coach Steve Edwards, Jr.

Huntington defeated Wheeling Park 48-21 last Friday while GW was the lone Class AAA team to win on the road. The Patriots downed Greenbrier East in Fairlea, 21-7.

In Week 10, Spring Valley became the first team since Capital (2014-2015) to own a two-game win streak over Martinsburg. The Timberwolves dealt the Bulldogs a 22-20 loss in Berkeley County last year and backed that result with a 35-30 win in Huntington. Spring Valley head coach Brad Dingess is quick to acknowledge that 2016-2019 state champions remain the team to beat.

“They are so good at everything they do. It was one of those nights here where we were able to cause some turnovers and capitalize on them. We did some things that were good and got that one. They are still the team in Class AAA in this state,” said Dingess.

“They are still the king. At some point, somebody is going to have to beat them up there and I just hope we are the ones this week.”

Martinsburg rolled over Parkersburg South 83-20 in the first round while the Timberwolves defeated Princeton, 56-14.

Jefferson has qualified for the Class AAA state quarterfinals for the first time since 2016. Bridgeport is in the final eight for the fifteenth consecutive season.

The Indians ran past Morgantown 34-7 last week while the Cougars pulled away from Hurricane, 31-18.

“Jefferson has always had great athletes at their school,” said Bridgeport head coach Tyler Phares. “And they have their great athletes now playing football. They are extremely fast and they throw it all over the place. Their run game is good. Their defense is sound. They’re a tough football team, there is no doubt about that. So we are going to have to play our best football game.”

Contrasting styles collide on Bakers Ridge as University hosts Cabell Midland. The Knights feature a ground-heavy attack that has racked up over four-thousand yards. The Hawks have utilized a balanced offensive game plan to their second 11-0 start since 2017.

“Here’s the scary thing about them — and I count the quarterback, they have four running backs that are just unbelievable. They just refuse to go down. They are physical and fast. His fullback, [Jackson] Fetty, is just unbelievable. He just runs around and through people,” said University head coach John Kelley.

“They are a machine. They just chew you up and don’t give you the ball back.”

“They’ve got some really good skill players that can run vertical, catch hitch routes and take it to the house and run post routes,” said Cabell Midland head coach Luke Salmons. “They are just a really good team with good receivers. We do see a lot of good receivers week-to-week. But they are really good. We respect that and we have to be on our A-game.”

A 73-point performance in their postseason opener boosted Independence’s season scoring average to sixty points. The Patriots welcome a Roane County team to Coal City that has yielded just 152 points in 11 games.

“We got to see Independence on film one time this year and that was against Nicholas County when we were breaking their film down. They’ve got a really good team. They are big up front on both sides. Early on, all we heard about was the running game but after we started watching film, they can pass the ball too,” said Roane County head coach Paul Burdette.

The Beavers and the Huskies are meeting in the Class AA quarterfinals for the second consecutive season. Last year, Bluefield defended home turf with a 33-10 win at Mitchell Stadium.

“We are not playing your average, run-of-the-mill No. 14 this week. We are playing a really good football team,” said North Marion head coach Daran Hays. “Them and Fairmont Senior have been the Alabama and Clemson for the last five years or so. Obviously, they are going to be a real tough out. They are extremely well-coached and they have skill all over the place. It didn’t take a whole heck of a lot to get our guys refocused. This is where the season ended last year so they know exactly what kind of game they are in for.”

Bluefield knocked off No. 3 Point Pleasant 44-20 on Saturday, while the Huskies defeated Grafton 64-14 in their first postseason home game since 2001.

After losing four out of five games in the regular season, Frankfort has rallied back. The Falcons advanced to the second round for the second time in three years with a 21-17 win at Lincoln. Poca is seeking their first Class AA state semifinal appearance since 2003. The Dots downed Liberty Raleigh, 28-6 in the opening round.

“We had really good practices last week,” said Poca head coach Seth Ramsey. “Guys were really dialed in. We have an older team. We have thirteen seniors and I think they all play. They have been in playoff games and big games before. They understand that either you win or go home. We are trying to push this thing as far as we can and see how close we can come to winning the thing.”

Fairmont Senior and RCB are two of four Big 10 Conference teams to advance to the quarterfinal round. West edged Byrd, 21-20 on October 15. RCB senior Jeremiah King rushed for 309 yards in that contest, but the Polar Bears held on to win at East-West Stadium.

“It is no secret, you have to key on Jeremiah King,” said Fairmont Senior head coach Nick Bartic. “He is good enough to take over a game. He is one of the best players in the state. It simplifies the game plan in our minds but you can’t get so locked in on him that you don’t focus on your overall game plan too.”

FSHS used a late safety to defeat top-seeded Herbert Hoover, 30-28. The Flying Eagles knocked off Scott 45-28. RCB is in the second round of the playoffs for the sixth time in the last decade.

Minutes after Fairmont Senior closed out a win over Herbert Hoover on Saturday, fellow No. 16 seed Gilmer County completed an upset at Cameron. Another trip to the northern panhandle awaits the Titans as they visit Wheeling Central. Gilmer is in the quarterfinal round for the first time since 2016.

“The seniors this year were water boys on that team,” said Gilmer County head coach Thomas Cogar. “It all kind of ties back in to those older kids that mentored these younger kids. It is special to look back at those old pictures and see the ball boys and the water boys doing some pretty big things themselves now.”

The Cougars are facing the Yellowjackets in the playoffs for the fourth time in the last eight seasons. Williamstown advanced to the second round with a 48-20 win over Greenbrier West. The Jackets own the longest postseason streak in Class A at 22 seasons.

East Hardy has allowed just twelve points in their current four-game win streak. The Cougars are seeking their fourth trip to the Class A semifinals in the last seven seasons. East opened their postseason with a 45-6 win over Meadow Bridge.

Fourth-year head coach Rick Haught has led the Rebels to a 37-9 record with a 4-2 postseason mark.

“This has been a really great group of kids. This is a year where we are really senior-laden,” said Haught. “These kids have had the opportunity to experience the playoffs each of their four years. I think they have something to prove with what we can do because we kind of got cut off last year. That seems to be a theme I have heard them talking about a lot. They just want to prove how good they can be.”

In the last of the twelve quarterfinals, the Mavericks and the Bulldogs will meet for the first time. Like their neighbors to the west in Ritchie County, Doddridge is in the midst of an impressive four-year run. The Bulldogs are 41-5 since the start of the 2018 season.

“Character and heart, they have shown it all year,” said Doddridge County head coach Bobby Burnside. “They have showed it in our wins and they showed it even in our loss battling from behind against Williamstown. [Friday] when it really got close, they could have folded. But they rose to the occasion and were able to finish the game off.”