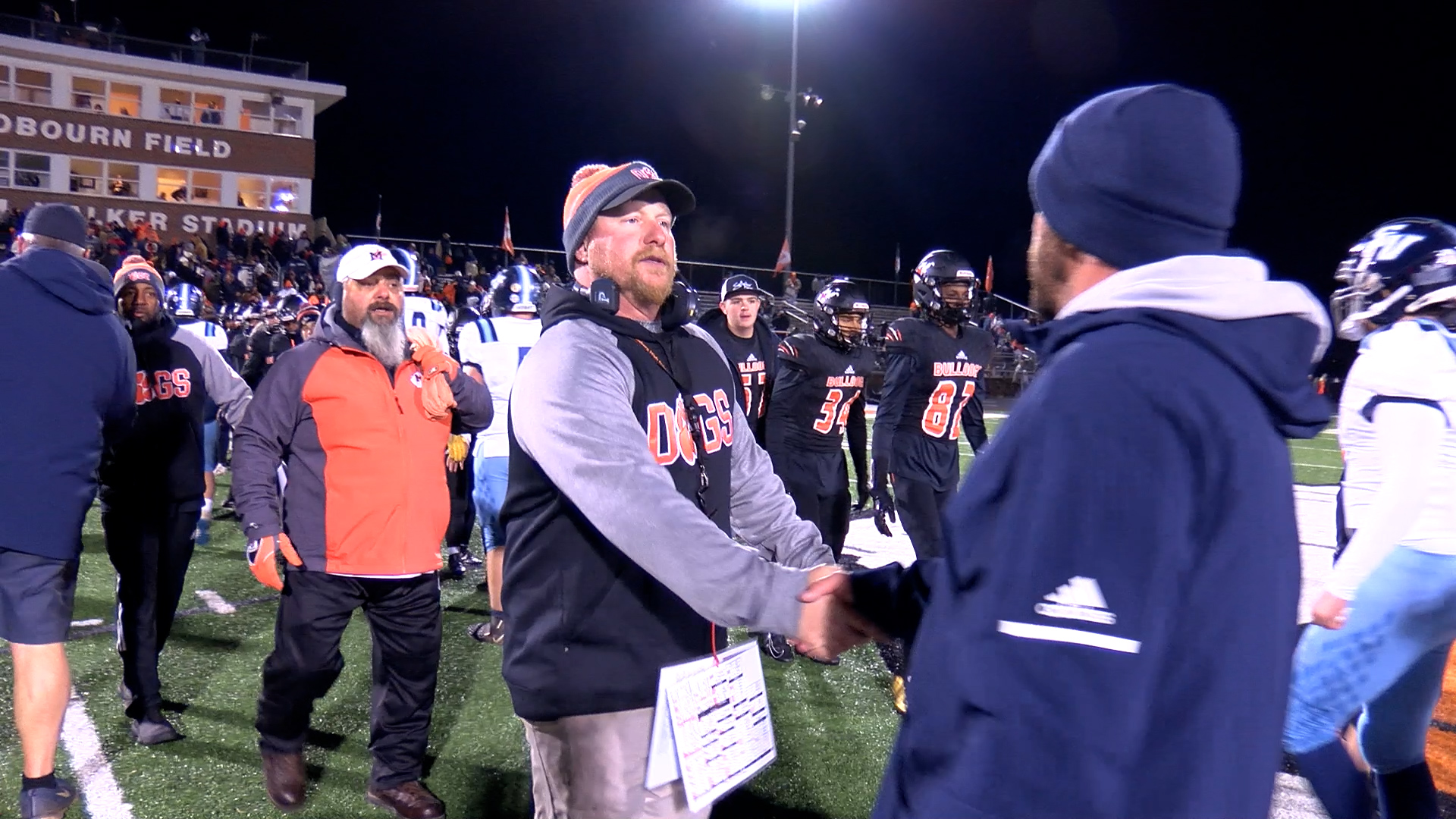 MARTINSBURG, W.Va. — Martinsburg jumped out to a 21-0 halftime lead and avenged back-to-back losses to Spring Valley with a 35-6 triumph over the Timberwolves in the Class AAA quarterfinal round. The Timberwolves defeated the Bulldogs in regular season meetings in each of the past two seasons.

“You always want a rematch if you lose a game and you normally don’t get it. They were excited about getting a second chance,” said Martinsburg head coach Britt Sherman.

Martinsburg jumped out to a 14-0 lead at the end of the first quarter with a pair of touchdown runs from Murphy Clement of three and eleven yards.

“When we went to them, we didn’t get off the bus for a while and maybe that was the same for them as well. It was important to get on them quick and just establish that at the beginning of the game.”

The Bulldogs collected a pair of defensive stops inside their own five-yard line. Facing fourth-and-goal at the one-yard line, the Martinsburg defense came up with a tackle for loss to keep the two-score cushion. Clement also intercepted a pass in the end zone late in the second quarter.

“It was huge. Those guys came up big and played lights out all night. They just flew around and flew to the football.”

Martinsburg led 21-0 at halftime after a 12-yard touchdown tote from Clement.

In the third quarter, Hudson Clement intercepted a Spring Valley pass at midfield and the Bulldogs quickly turned that in points. Ezra Bagent connected with Xavion Kendall on a 20-yard scoring strike, making the score 28-0.

Spring Valley got on the scoreboard eleven seconds into the fourth quarter. Dalton Fouch hit Corbin Page on a three-yard touchdown pass to cap a 15-play, 74-yard drive that covered 8:11. Martinsburg however marched back down the field and Bagent capped a touchdown drive with a four-yard run.

“He is our pocket passer guy but he has to get two-to-three yard runs and four-to-five yard runs when it is really crunch time. He did a good job of lowering his head and getting what we needed.”

In the first meeting of the season, Ty Bartrum scored five touchdowns for the Timberwolves. He was held to just three receptions in this contest.

“We changed our game plan up a little bit. We put a guy in his face every now and then. We just didn’t do the same thing that we did before. It was a great plan.”