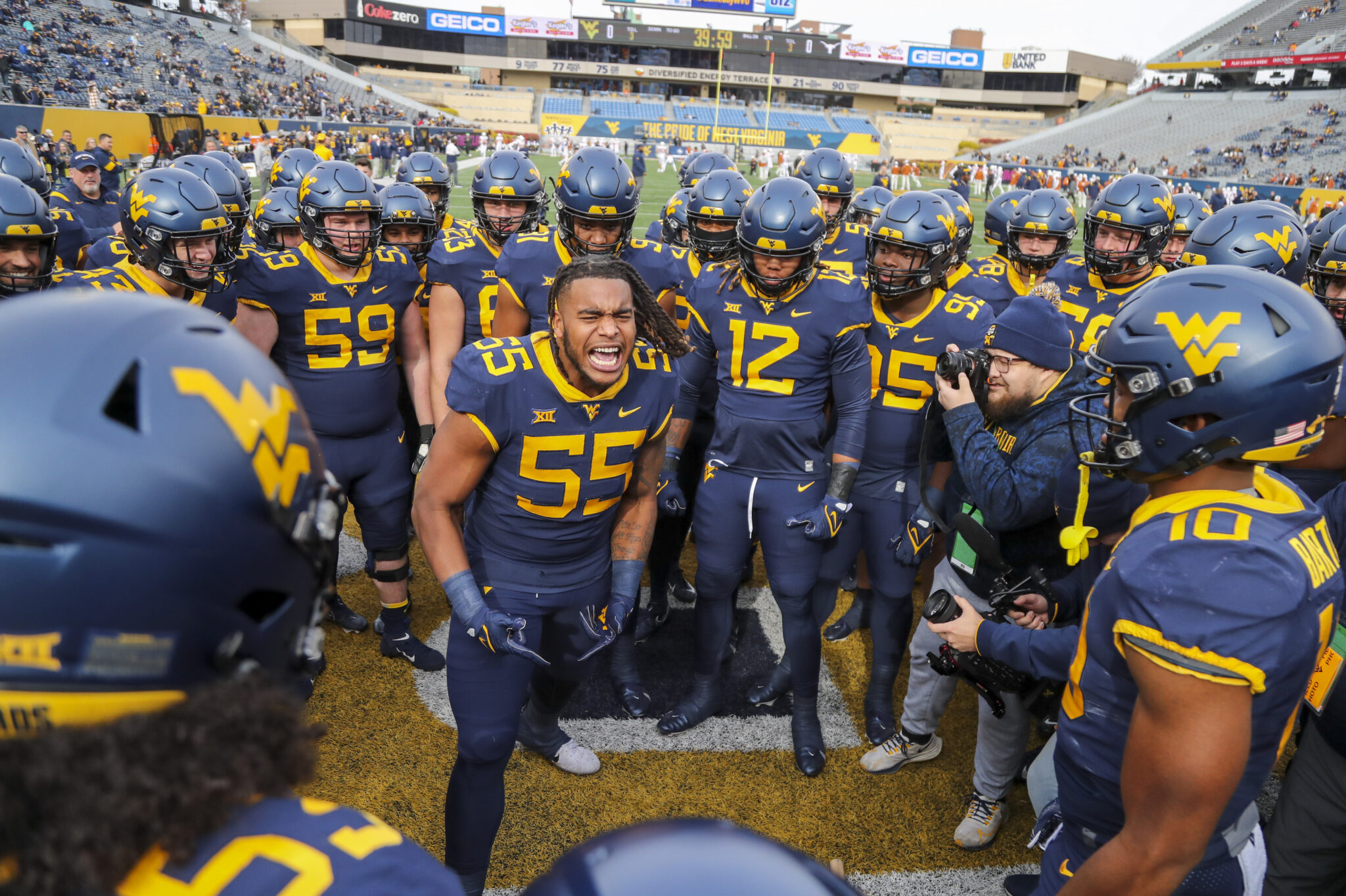 West Virginia defensive lineman Dante Stills (55) leads his team in a huddle prior to their game against the Texas Longhorns at Mountaineer Field at Milan Puskar Stadium. Mandatory Credit: Ben Queen-USA TODAY Sports

Both the Longhorns and Mountaineers have identical 2-5 records in Big 12 Conference play. The all-time series between the two teams is tied at 5-5, although Texas has claimed wins in three of its four visits to Morgantown.

Texas, which has lost five in a row, last won October 2 against TCU.

3:30 p.m. — Texas gains 4 yards on four pass plays and turns it over on downs. FINAL — WEST VIRGINIA 31, Texas 23. Mountaineers improve to 5-6 and will play for bowl eligibility next Saturday at Kansas. Longhorns fall to 4-7.

3:25 p.m. — Neal Brown elects to go for it on fourth-and-5 from the Texas 36. Doege throws to the end zone for Esdale, but the pass in complete. Longhorns take over with 36 seconds left and no timeouts.

3:14 p.m. — After Hurd leaves the game with an injury, Thompson gets another shot behind center, but his pass is intercepted by Sean Mahone on fourth-and-8 from the West Virginia 30. A 15-yard penalty on Texas during Mahone’s return allows WVU to start just shy of midfield with 2:51 left. Longhorns have all three timeouts remaining.

2:47 p.m. — Hurd leads his second touchdown drive, this one capped by Roschon Johnson’s 6-yard scoring run. Texas goes for two in an effort to make it a three-point game, but the pass falls incomplete. WEST VIRGINIA 28, Texas 23, 12:25 4th qtr

2:35 p.m. — West Virginia answers with a 75-yard touchdown drive that initially looked as though it would be a three-and-out when Doege was sacked on each of the first two plays. But the quarterback connected with Wright for 19 yards on third-and-18. Brown broke off runs of 26 and 18 yards, before Doege threw a 14-yard scoring pass to Sean Ryan. WEST VIRGINIA 28, Texas 17, 0:29 3rd qtr

2:05 p.m. — Hudson Card replaces Casey Thompson as Texas’ quarterback to start the second half. The change does not immediately yield a positive result as the Longhorns pick up one first down and gain 15 yards on five plays before punting for a fifth time. Thompson was 4-of-12 for 29 yards in the opening half. The Mountaineers start on their 15 at the 13:10 mark of the third quarter.

1:40 p.m. — HALFTIME: WEST VIRGINIA 21, Texas 10. Casey Legg’s 48-yard field goal is no good on the second-to-last play of the opening half. Longhorns receive to start the second half.

1:32 p.m. — Cameron Dicker’s 50-yard field goal makes it an 11-point game. Mountaineers called two of their three timeouts on defense that drive and still have time to add to their lead. WEST VIRGINIA 21, Texas 10, 1:13 2nd qtr

1:05 p.m. — Moments after a false start on third-and-inches negates Doege’s quarterback sneak for a first down, the Mountaineers punt and Texas puts together its first scoring drive. Keilan Robinson’s 49-yard TD run cuts the Longhorns’ deficit in half. WEST VIRGINIA 14, Texas 7, 8:34 2nd qtr

12:50 p.m. — Doege throws a 14-yard touchdown to Winston Wright and the Mountaineers double their lead. WVU drove 80 yards on its second scoring drive, with Doege finding Bryce Ford-Wheaton for 31 yards on third-and-7, before he connected with Isaiah Esdale for 18 yards on third-and-10 two plays prior to the TD. WEST VIRGINIA 14, Texas 0, 13:44 2nd qtr

12:25 p.m. — Texas has punted twice without gaining a first down. The Mountaineers punted on their second series after one trick play produced a first down, then the next resulted in Doege being sacked for a 16-yard loss. WVU takes over at its 18 with 6:42 left in the first quarter.

12:10 p.m. — The Mountaineers march 75 yards on the game’s opening series and Doege throws a 20-yard touchdown pass to Sam James on third-and-7. All but 3 of the 75 yards came on Doege’s six completions, including a 23-yarder to true freshman wideout Kaden Prather on the game’s first play. WEST VIRGINIA 7, Texas 0, 11:02 1st qtr

11:30 a.m. — WVU wideout Isaiah Esdale is dressed and warming up. Esdale has not played since the Mountaineers’ most recent win October 30 against Iowa State.

Of note: Ryan is a junior and Drummond and Hughes are redshirt juniors. Redshirt senior quarterback Jarret Doege was not included in the video. WVU head coach Neal Brown said Tuesday who does and doesn’t walk on Senior Day isn’t necessarily an indicator of who is and isn’t returning, before adding that a player could even be included in the senior festivities two straight seasons.

Setting the scene from Morgantown