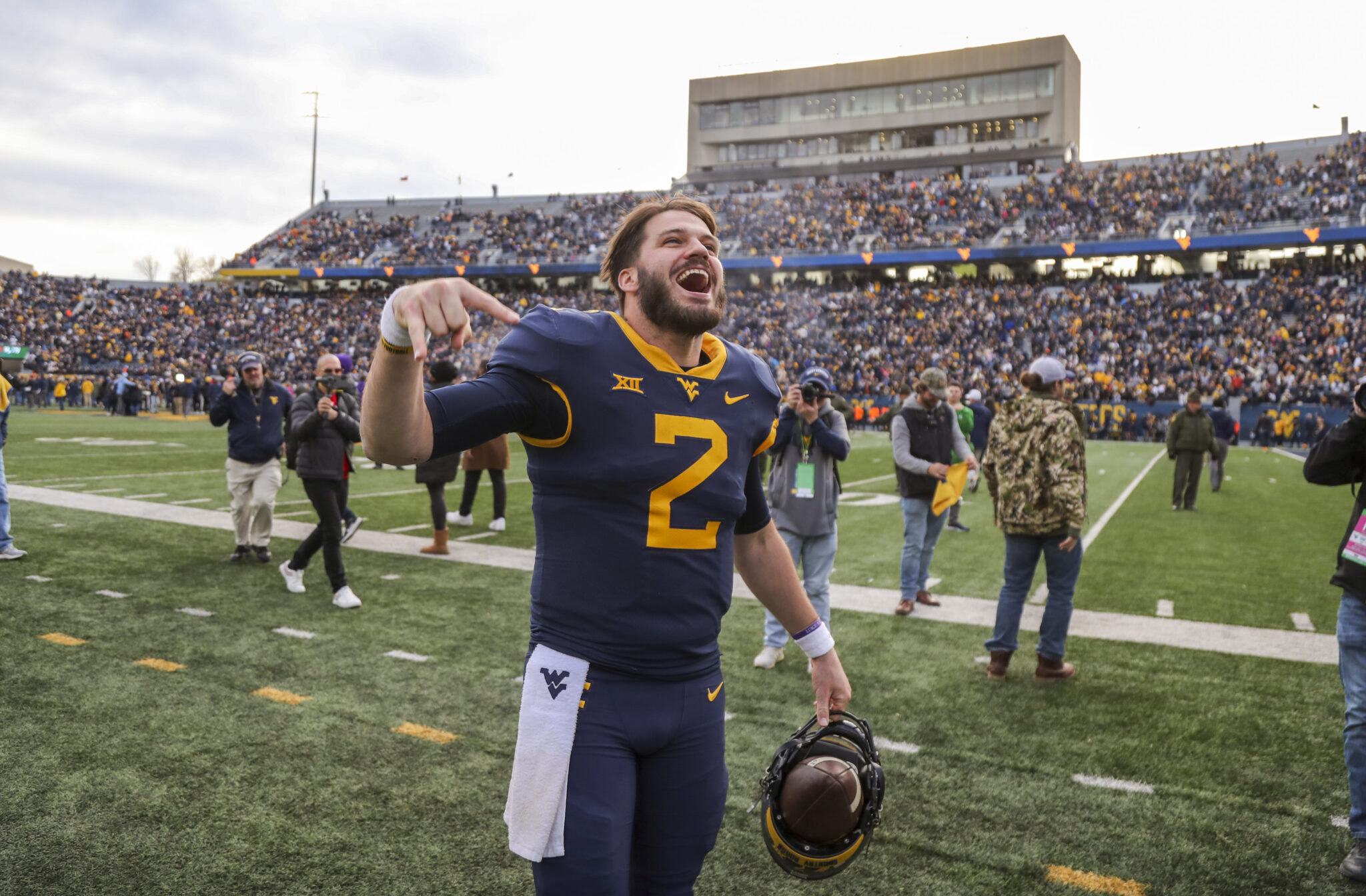 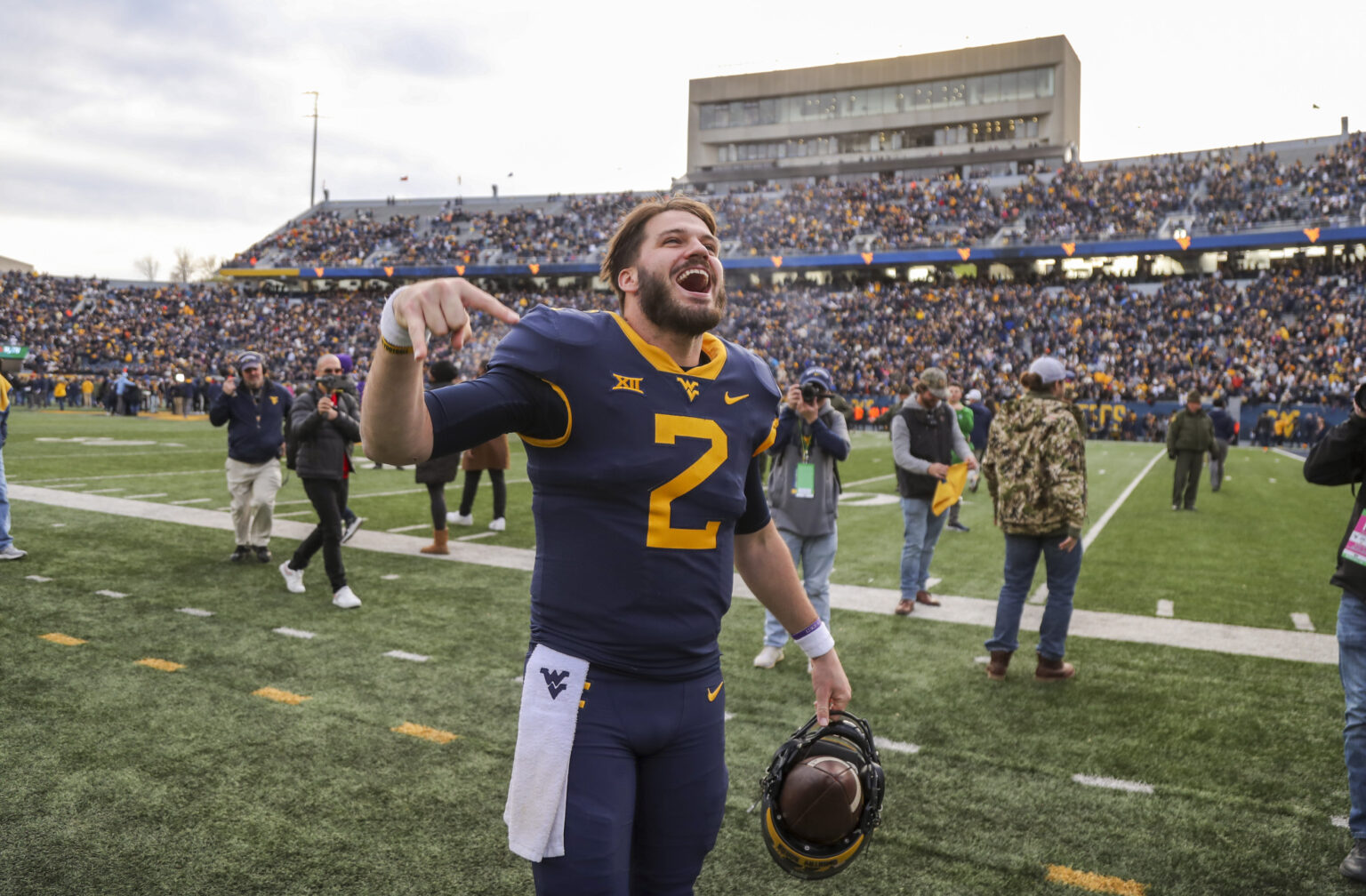 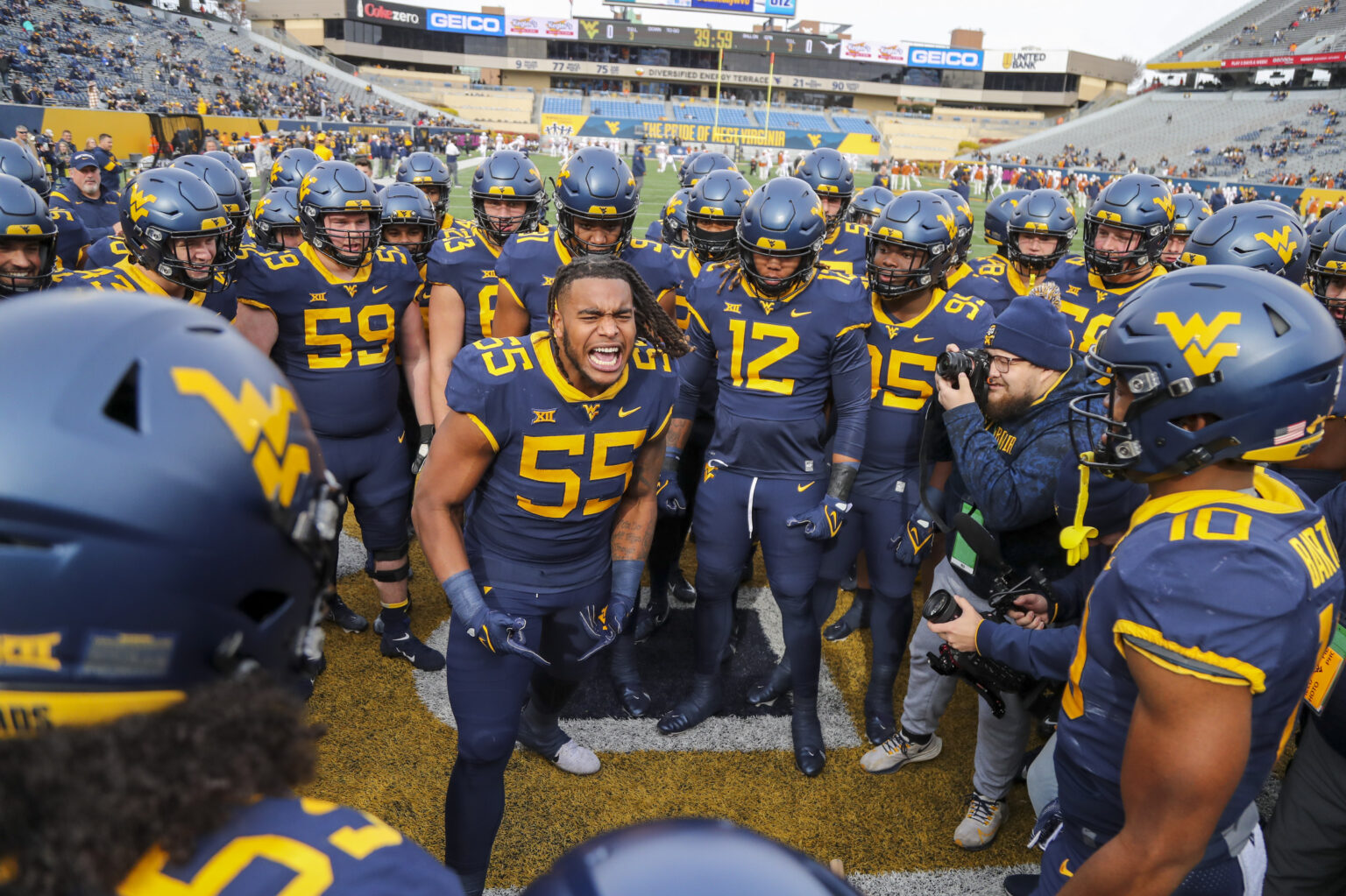 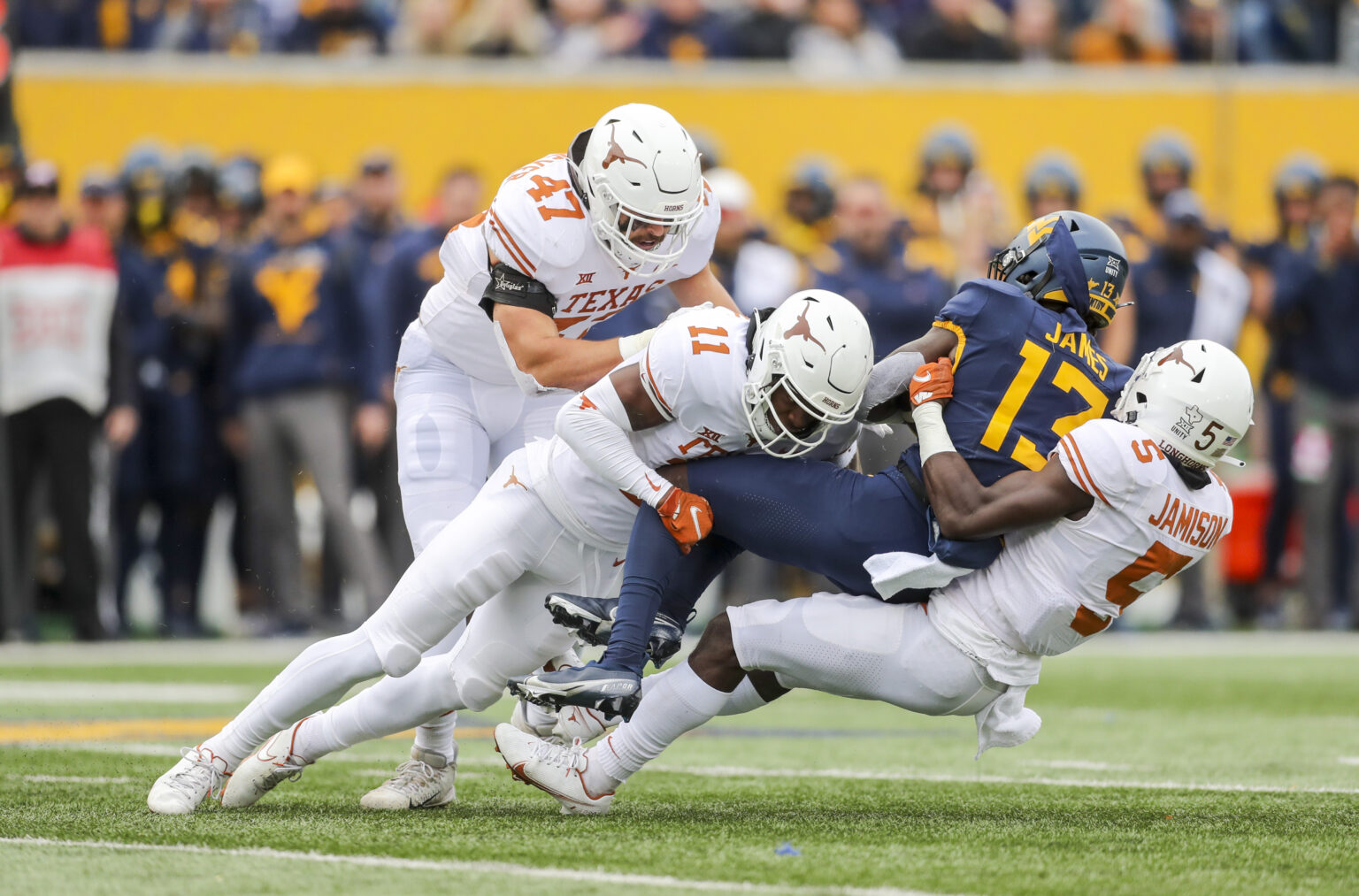 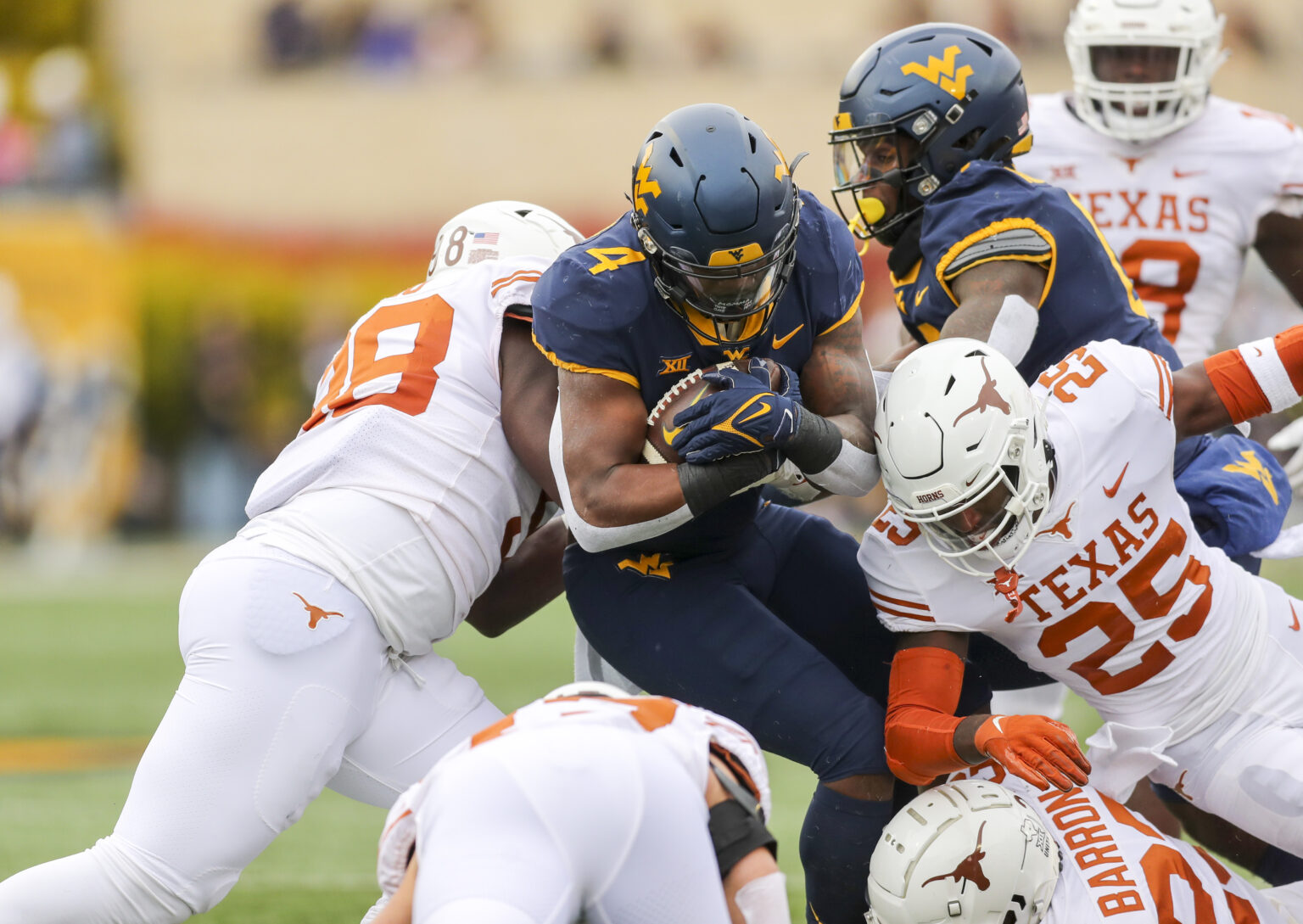 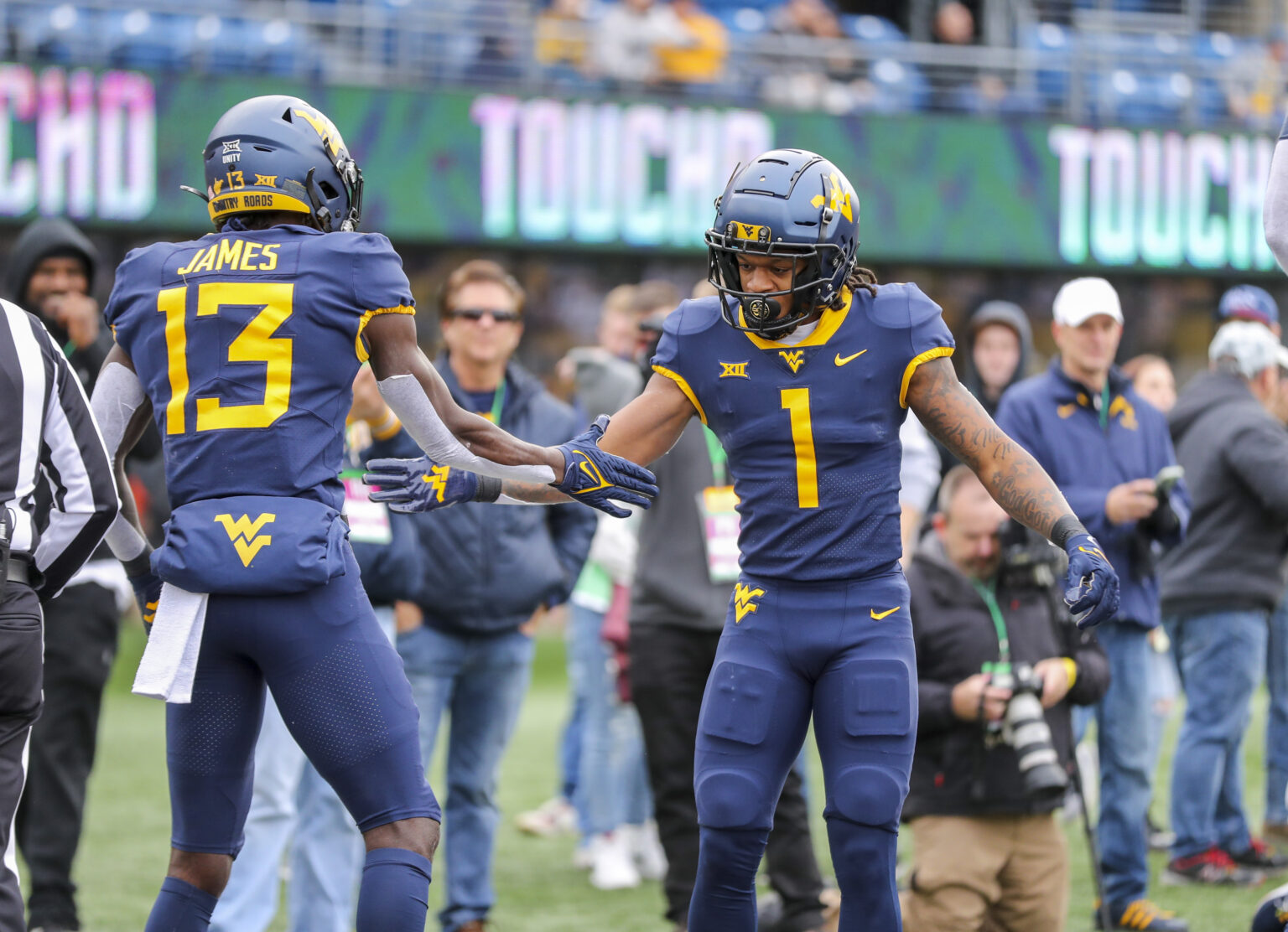 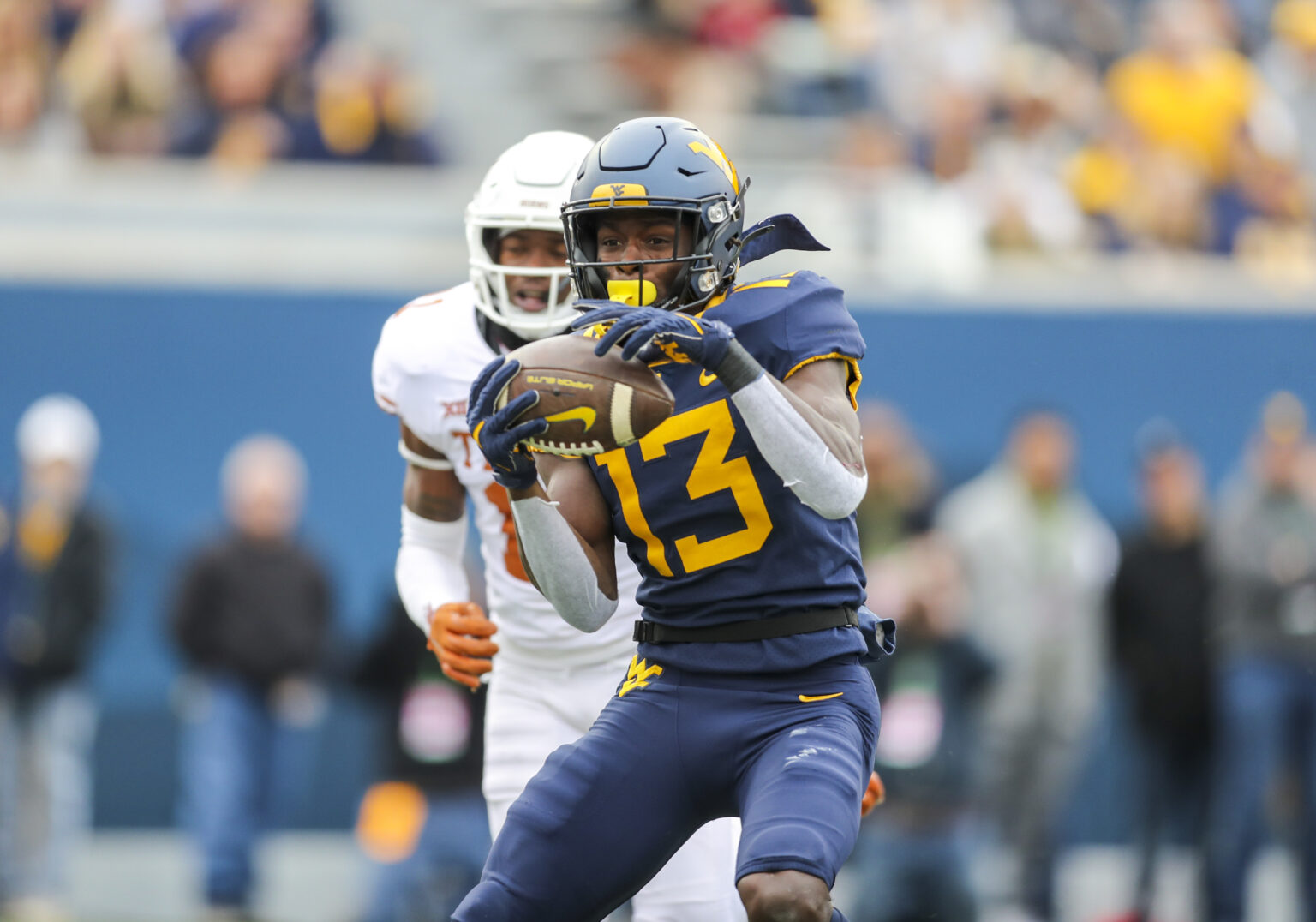 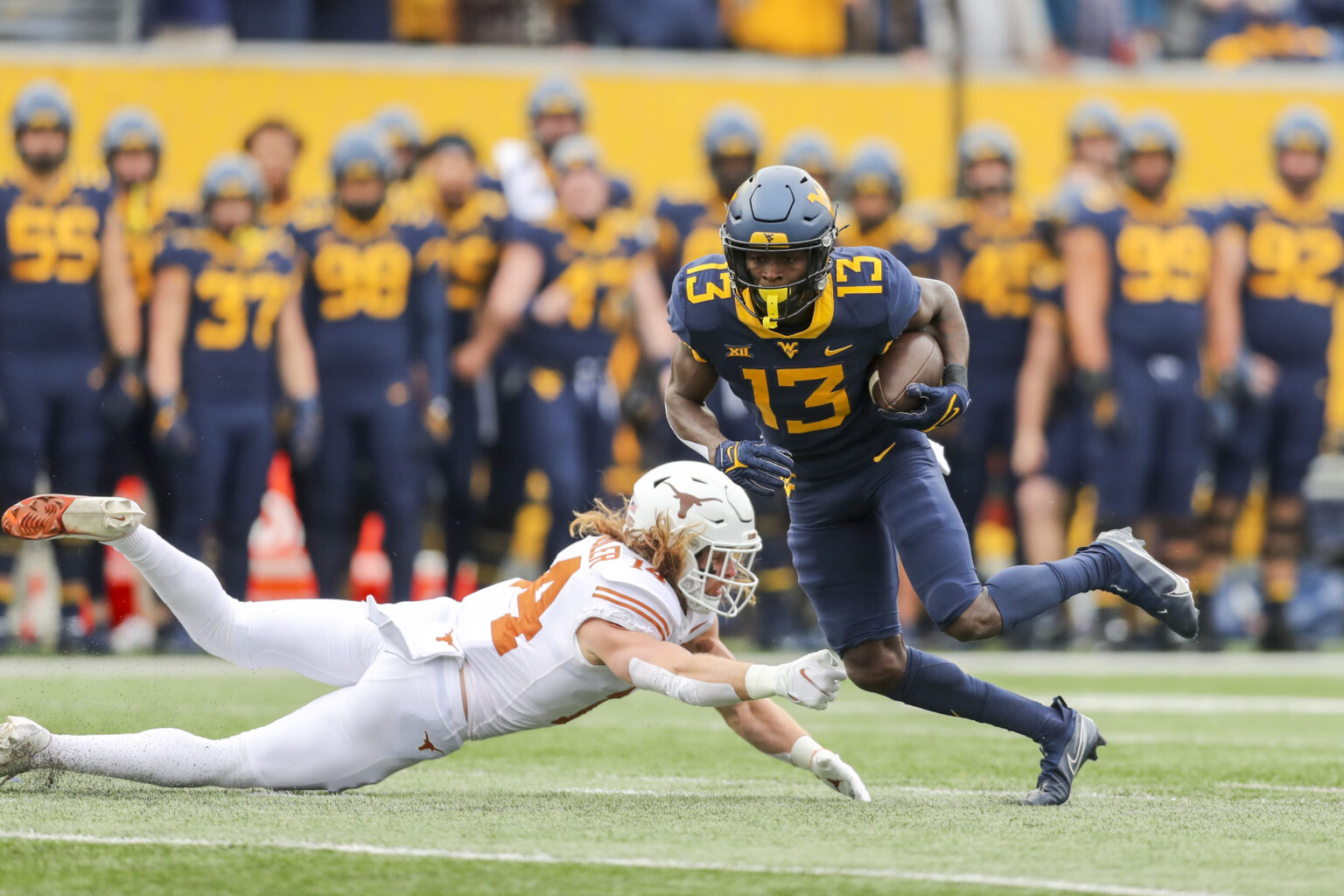 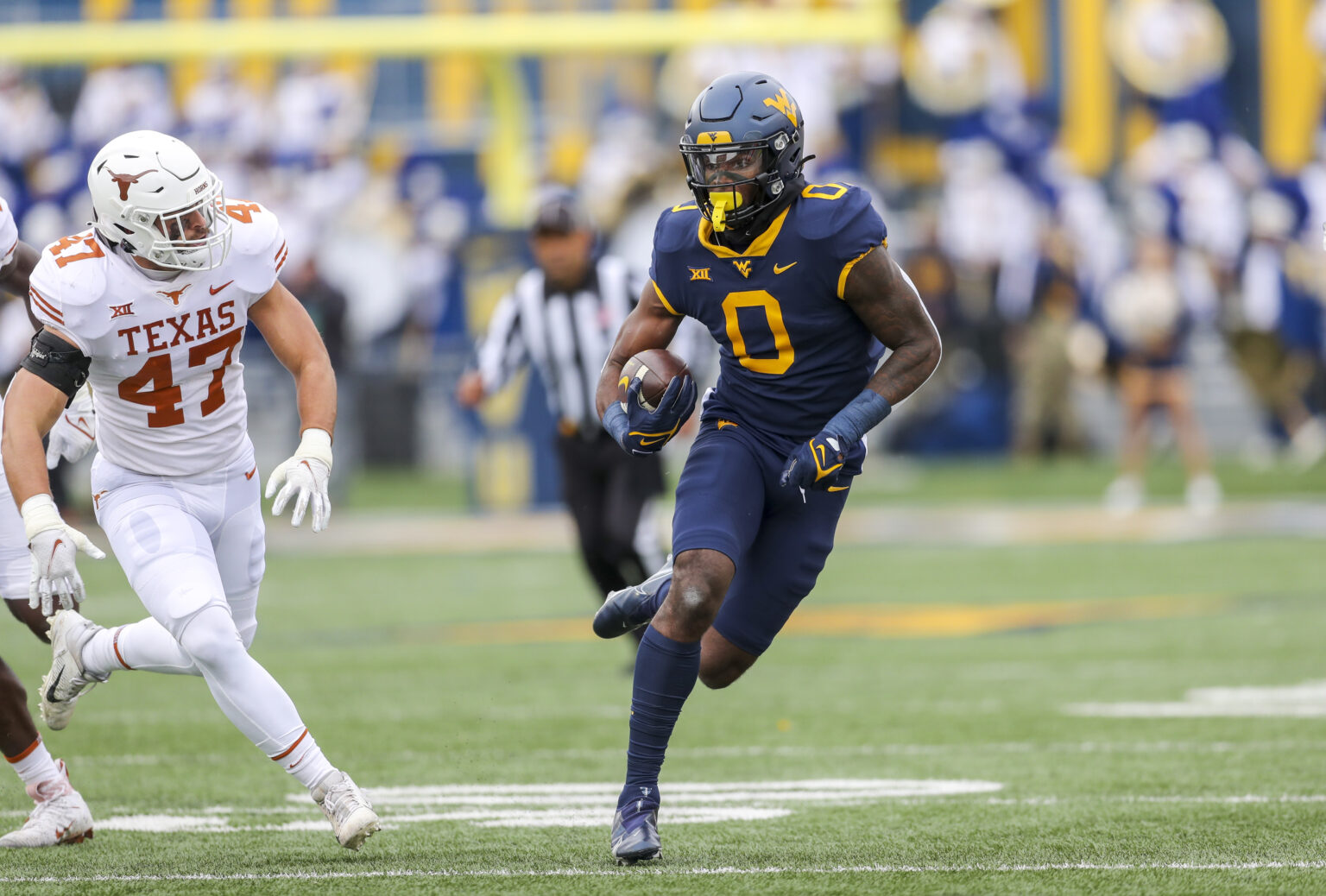 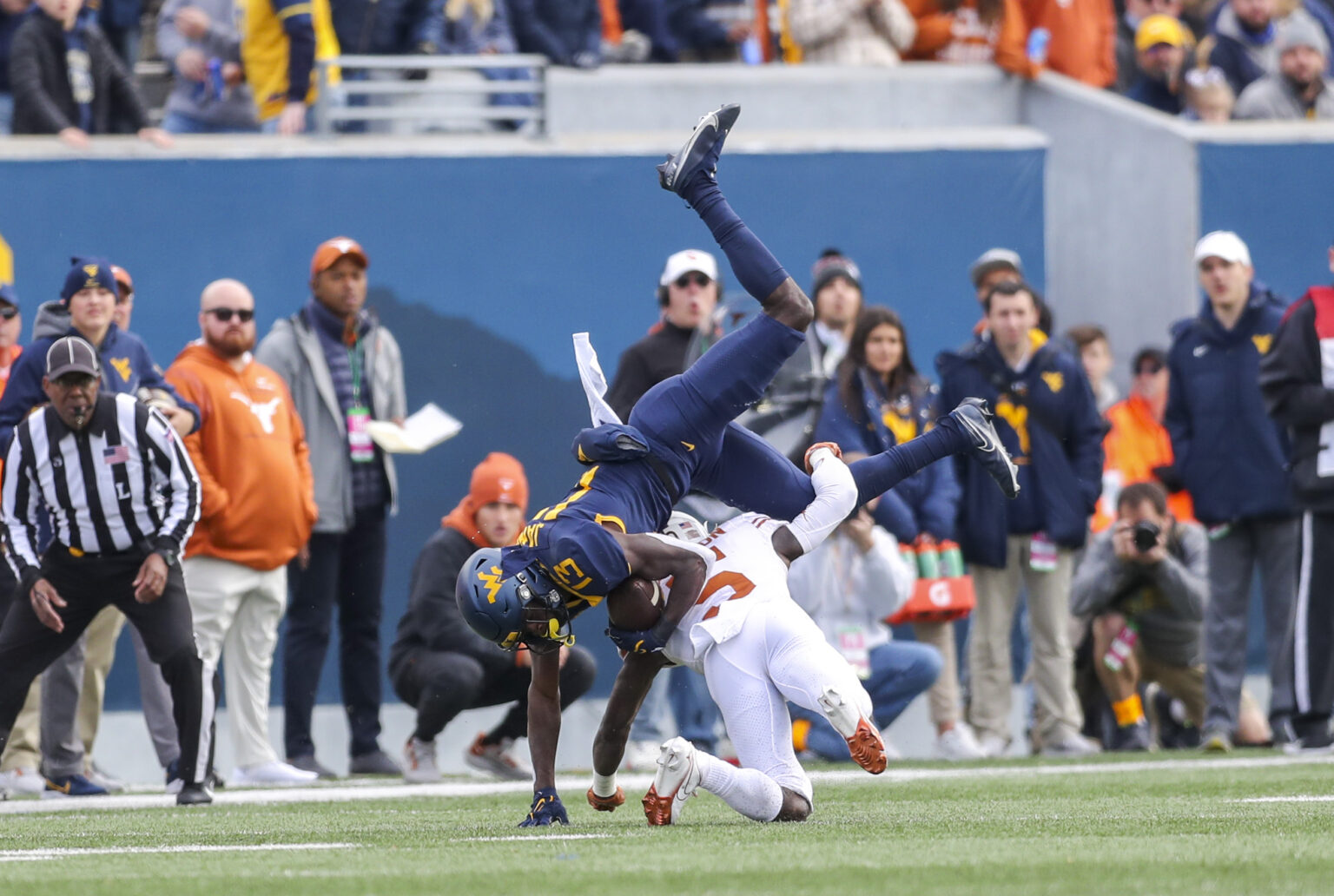 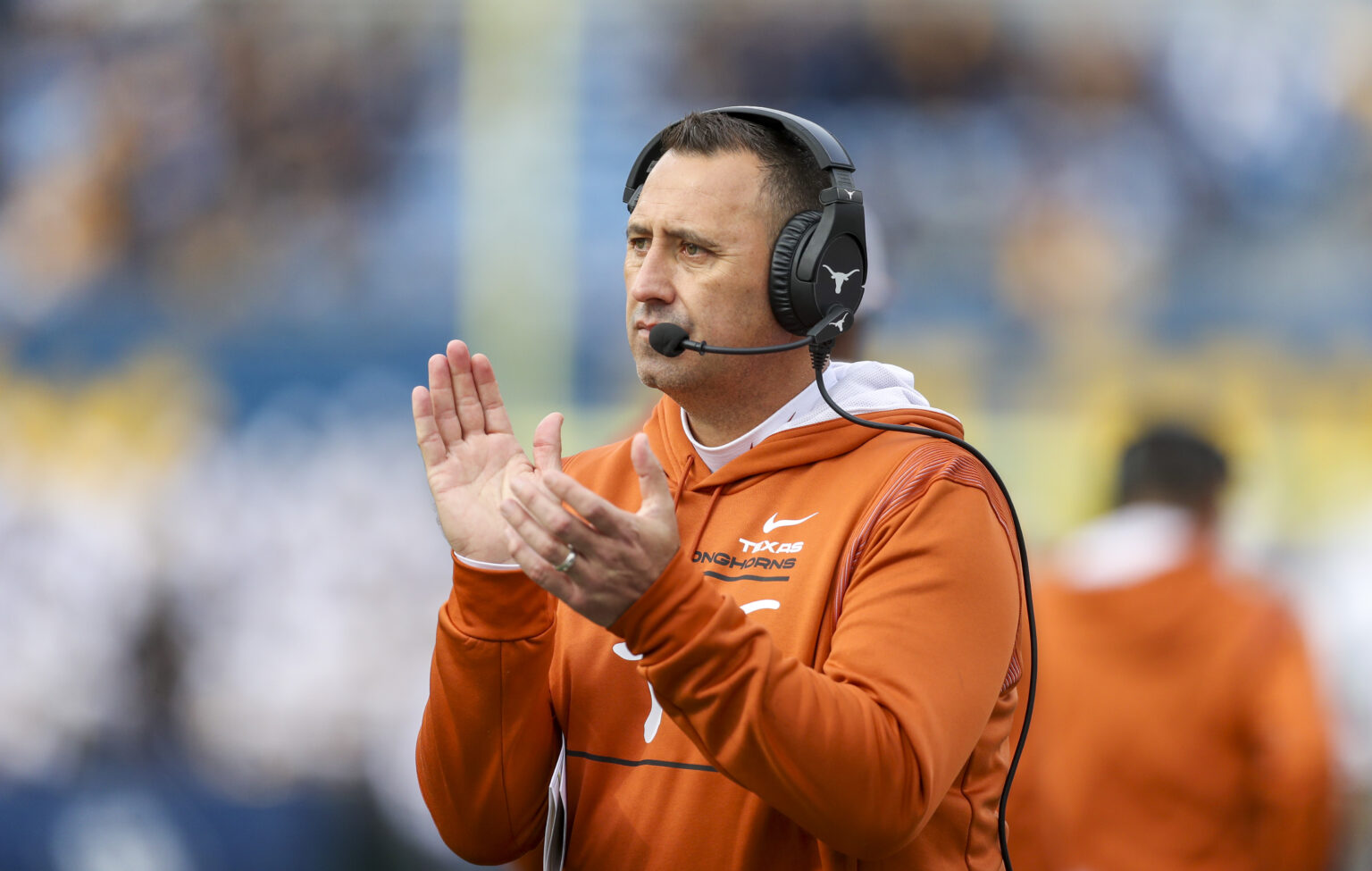 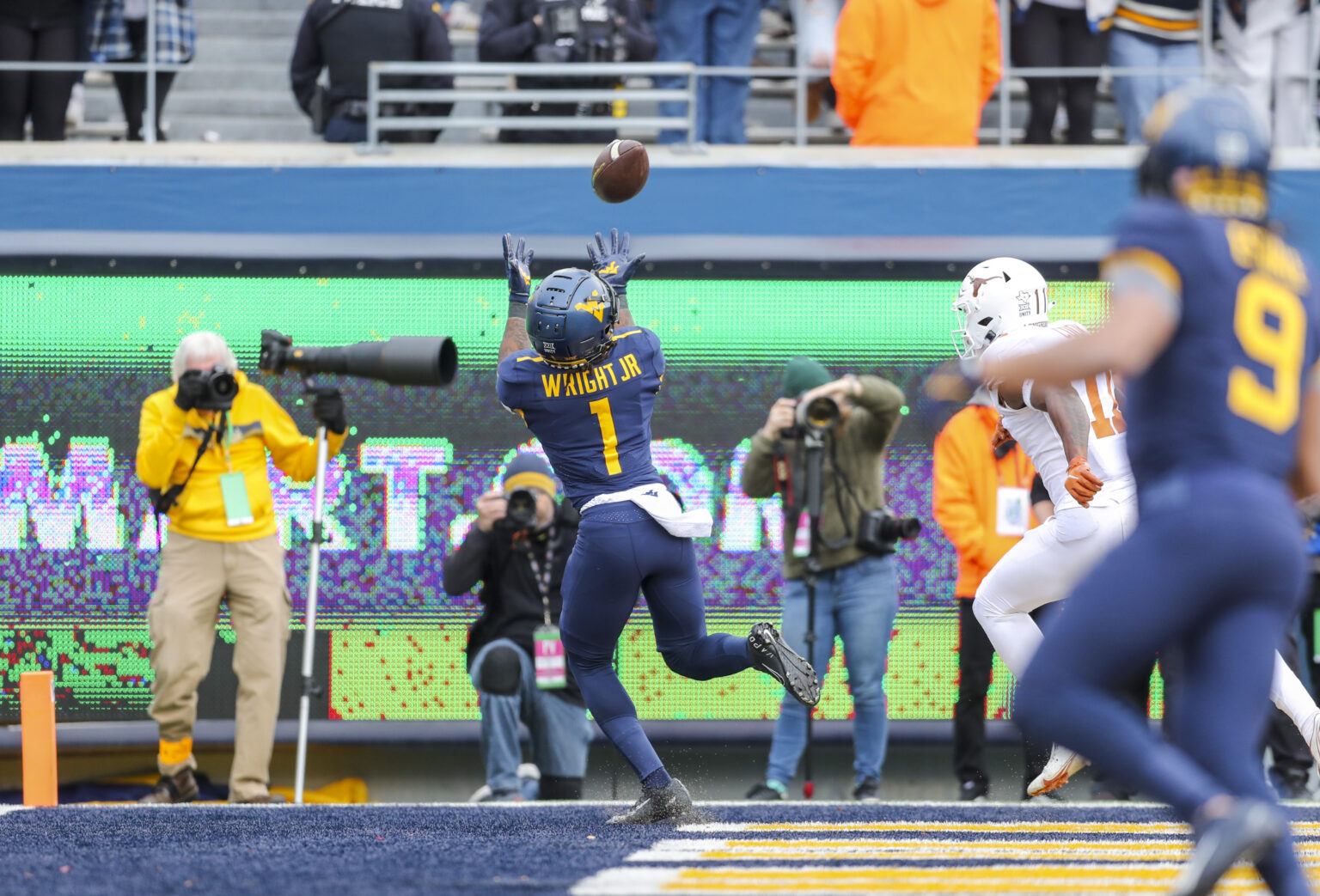 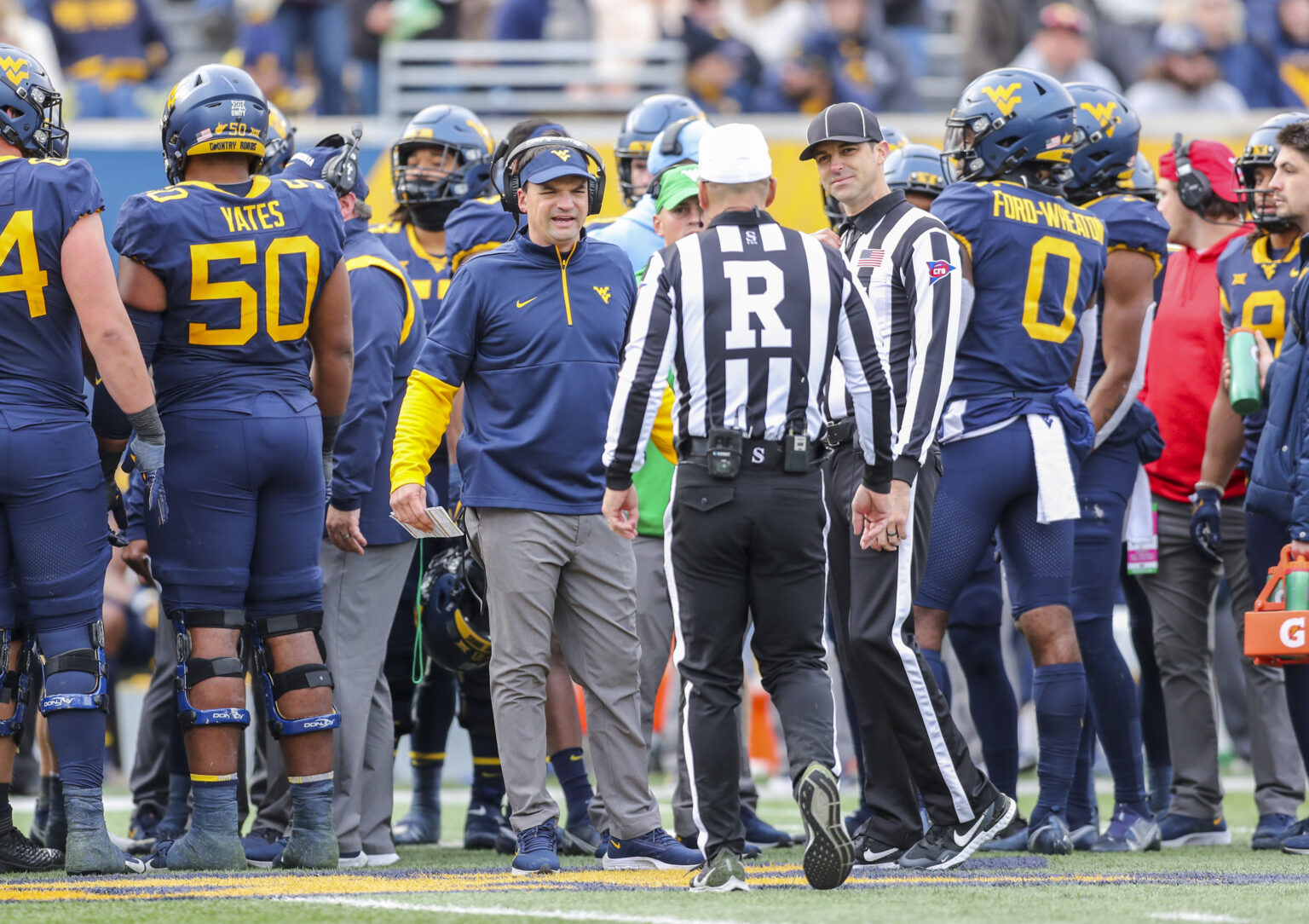 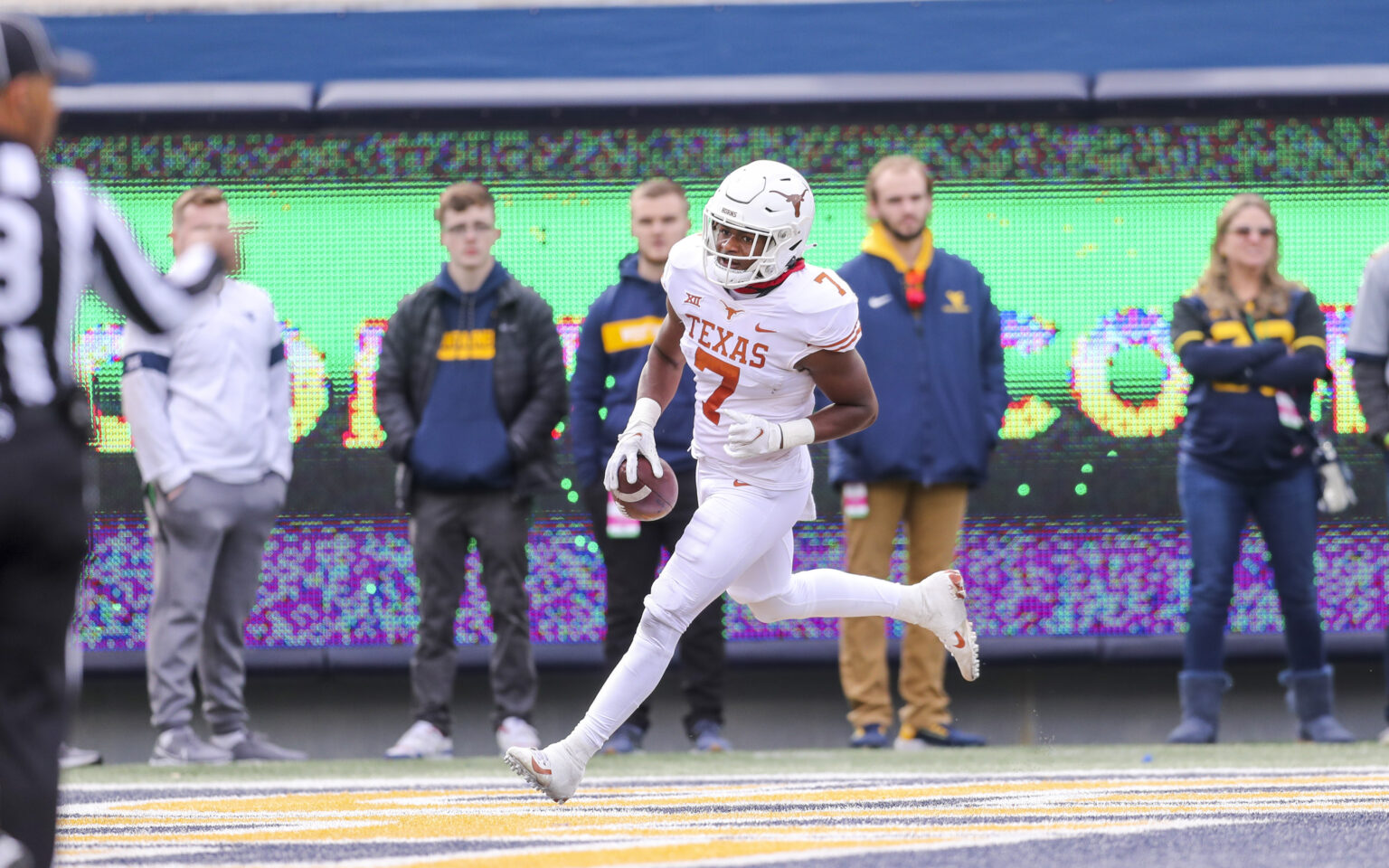 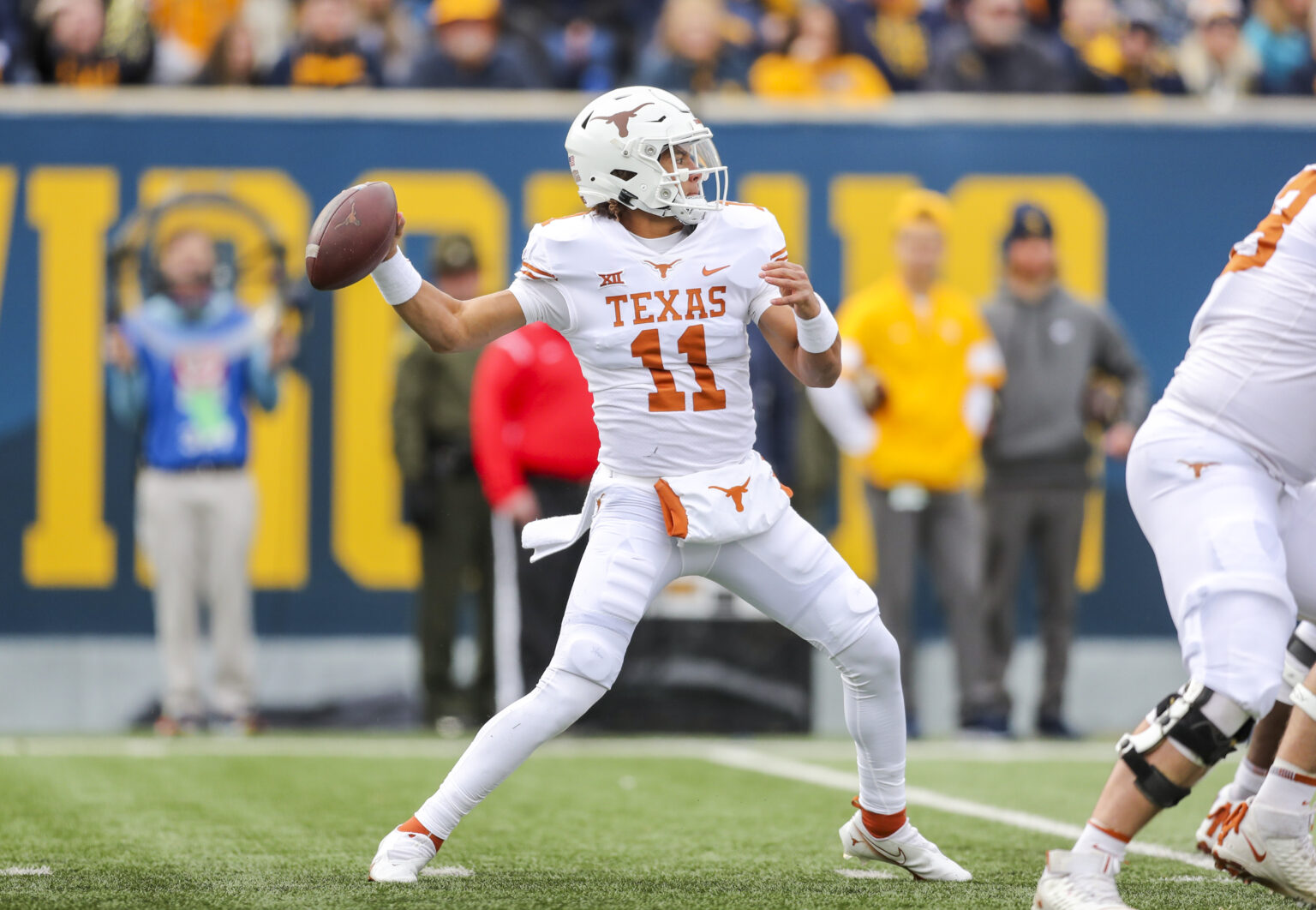 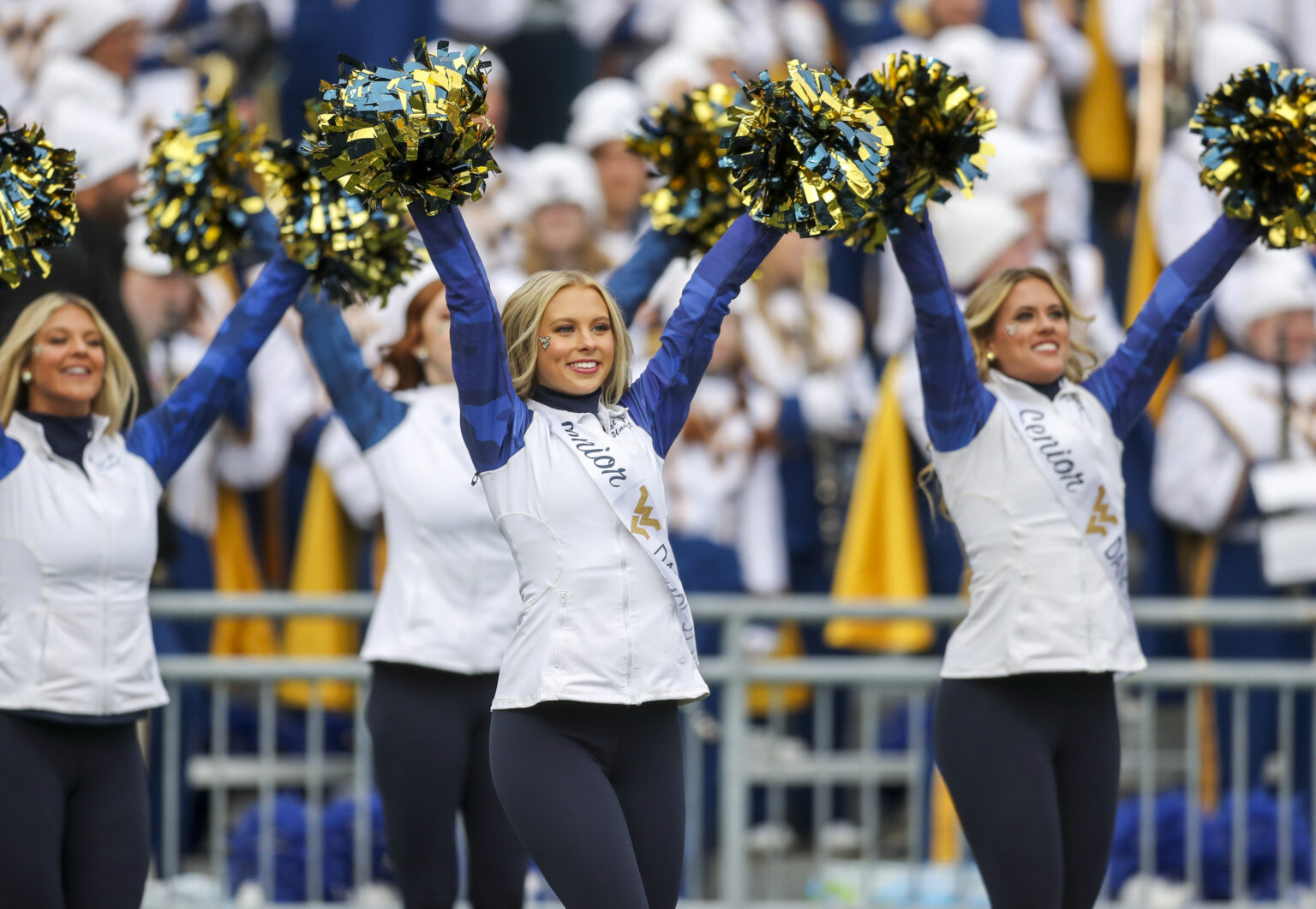 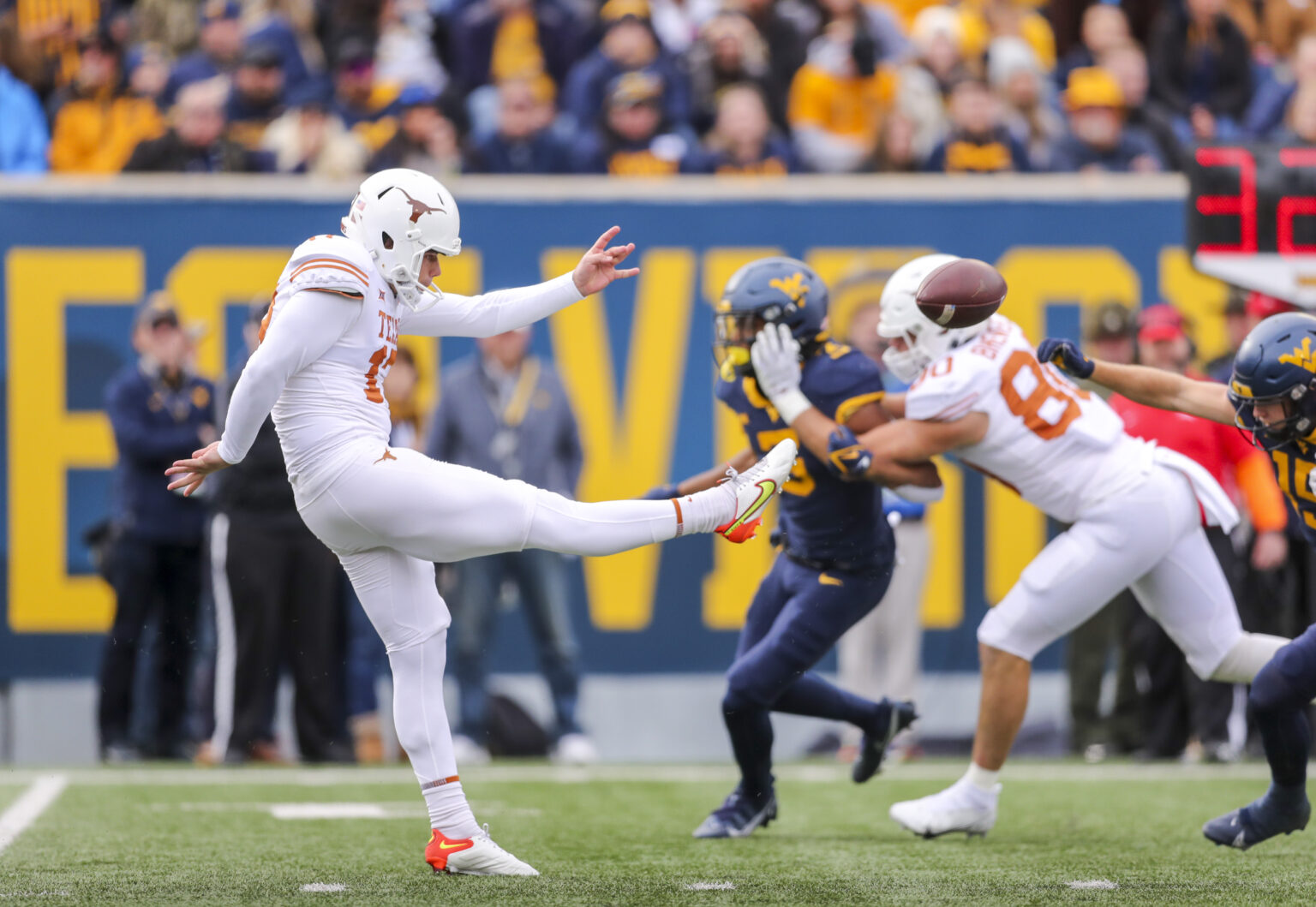 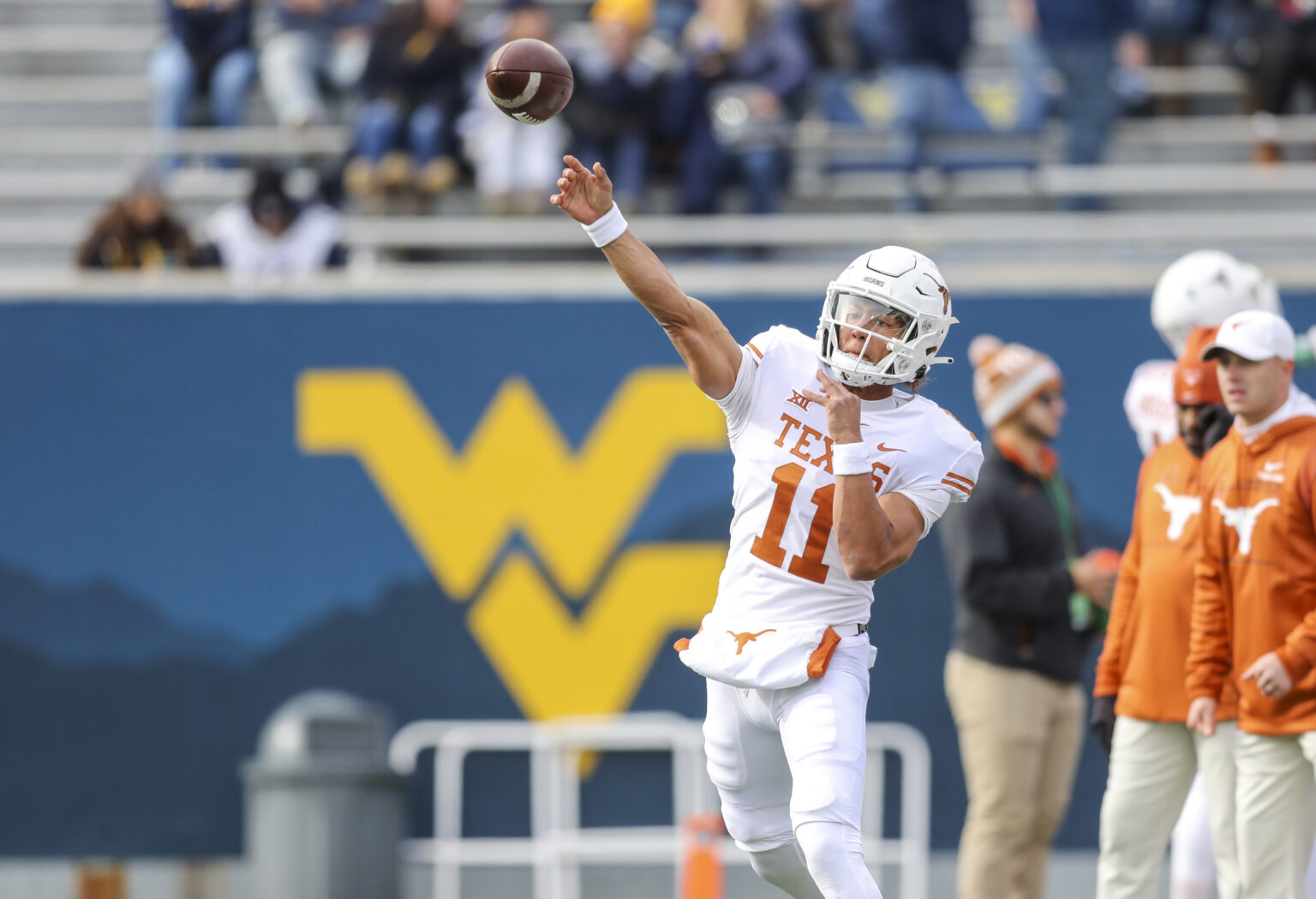 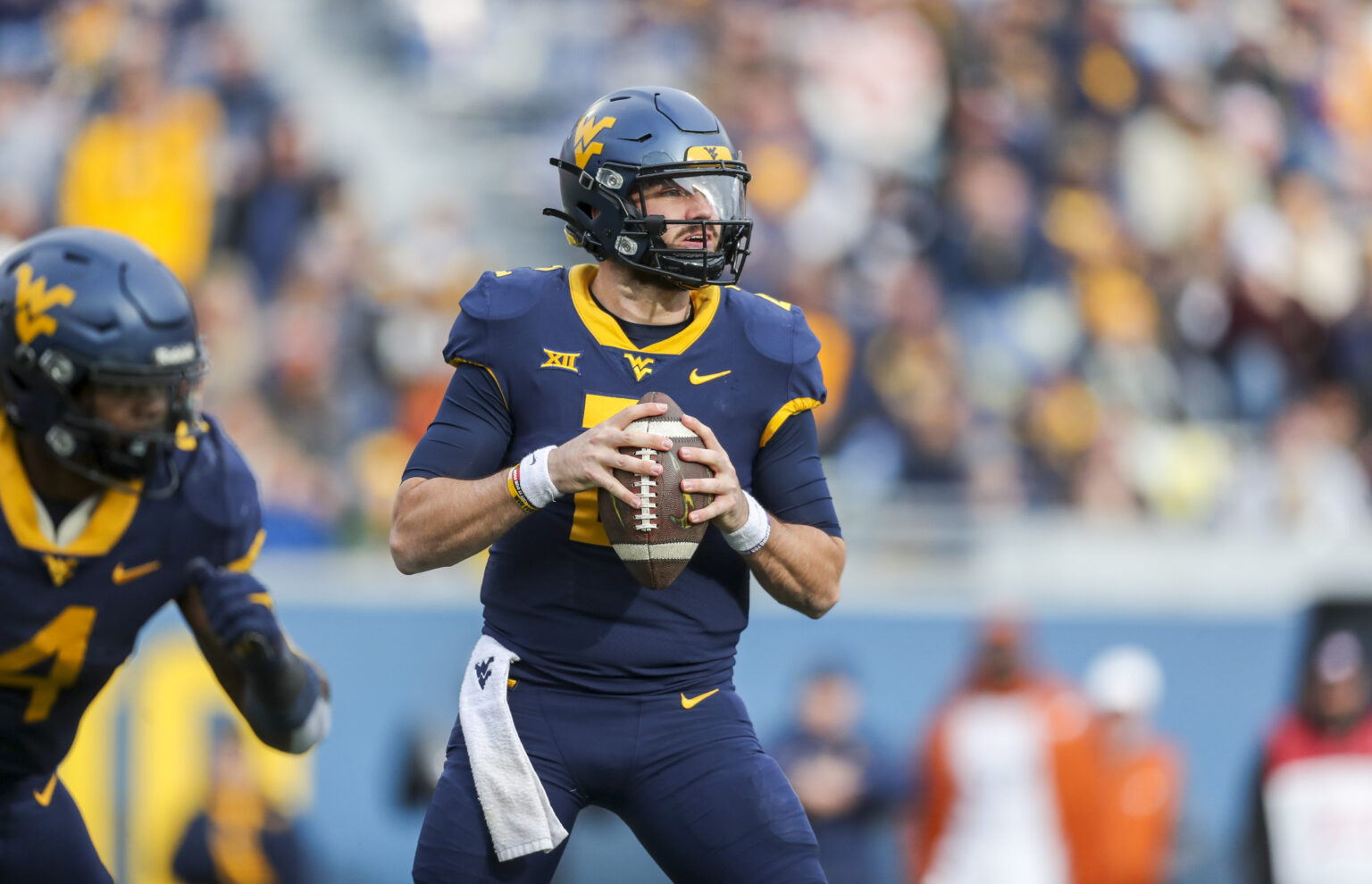 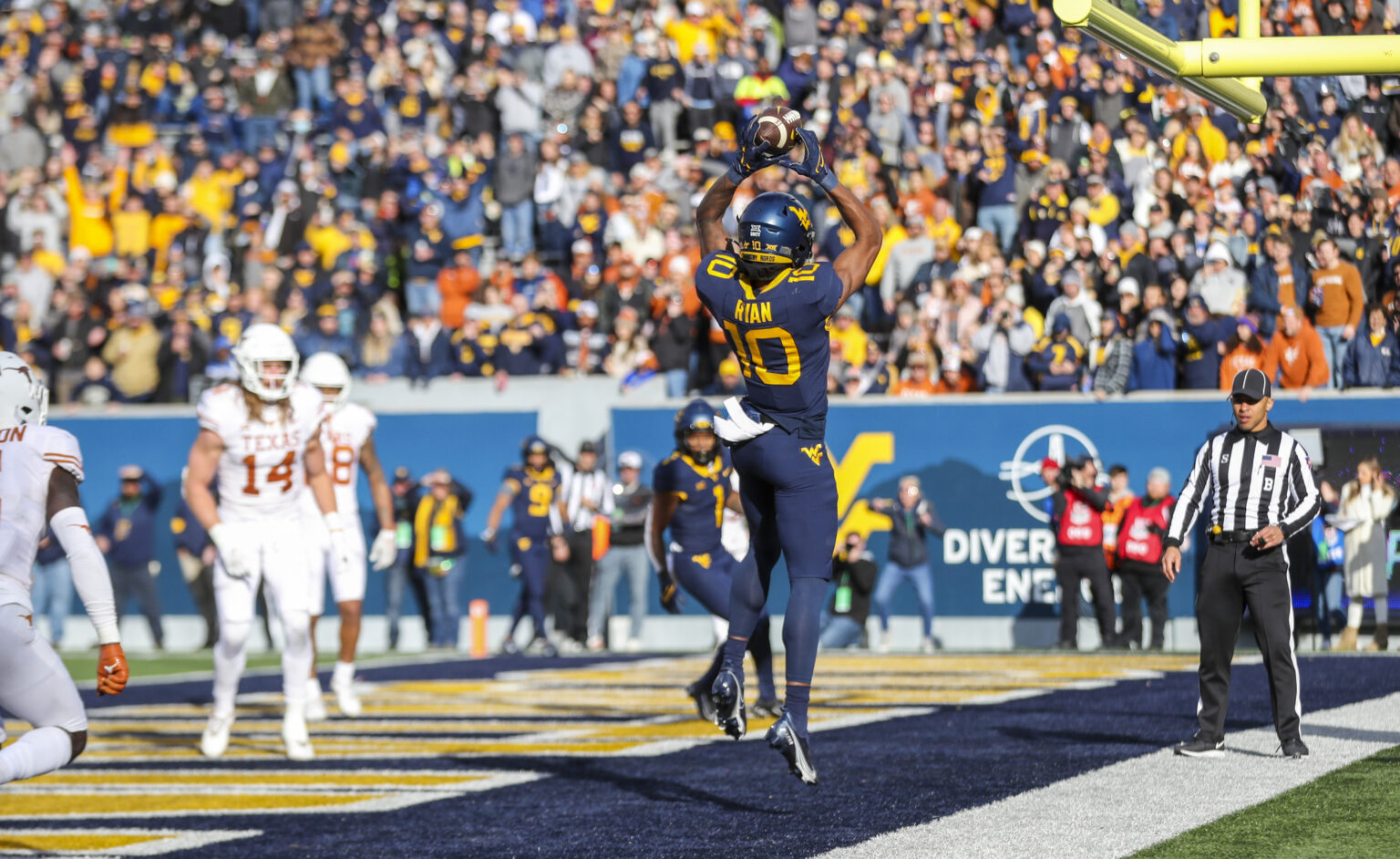 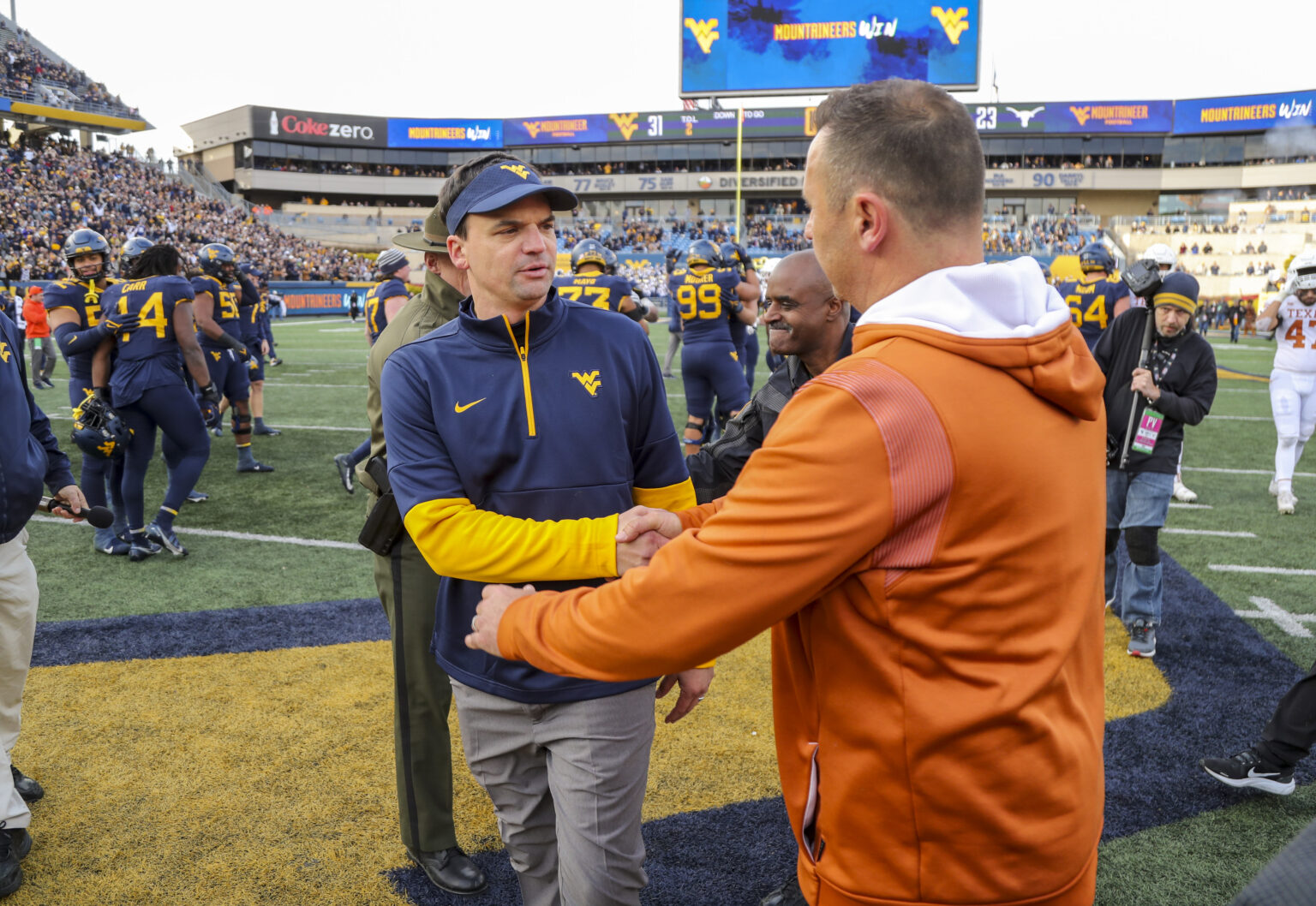 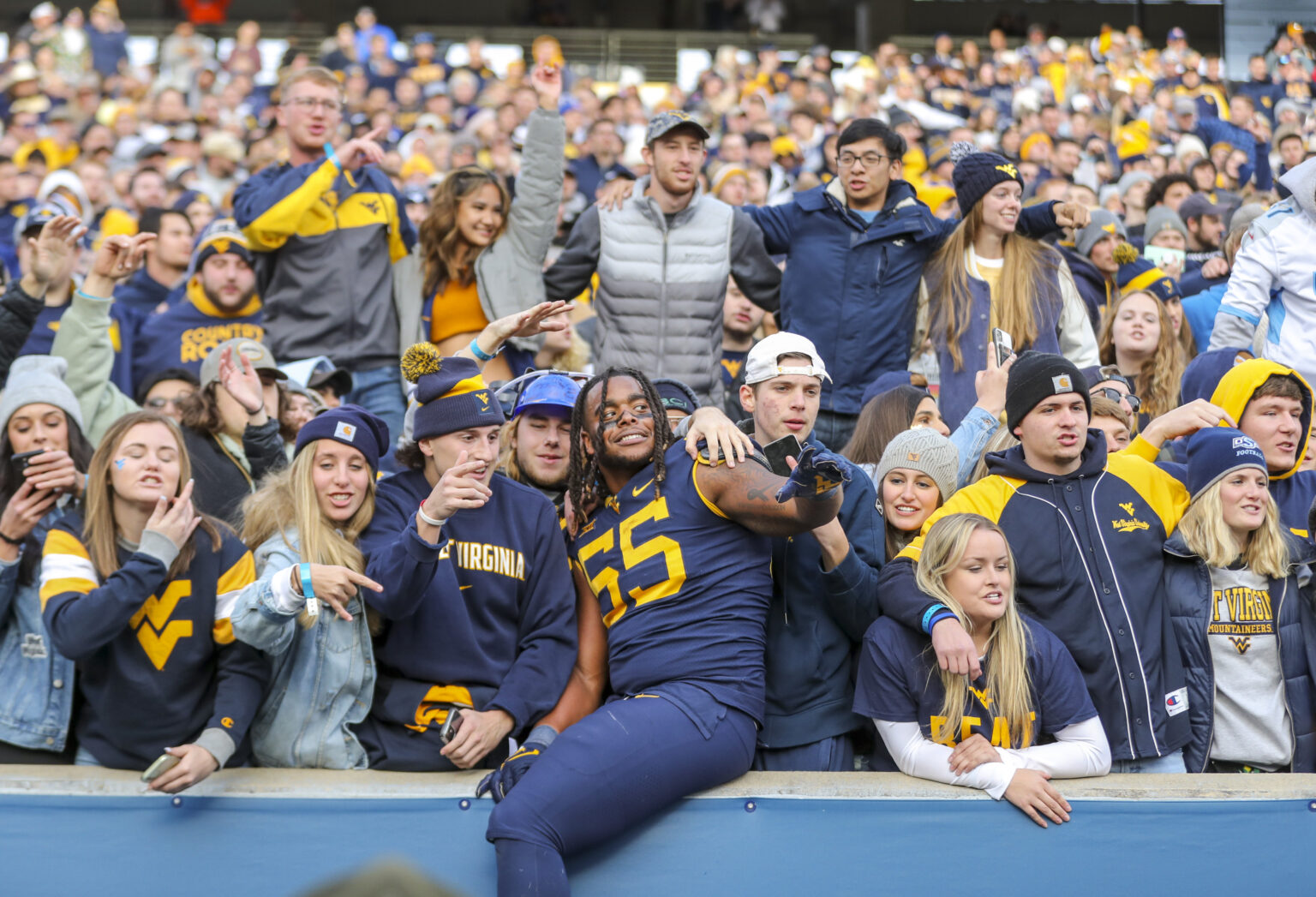 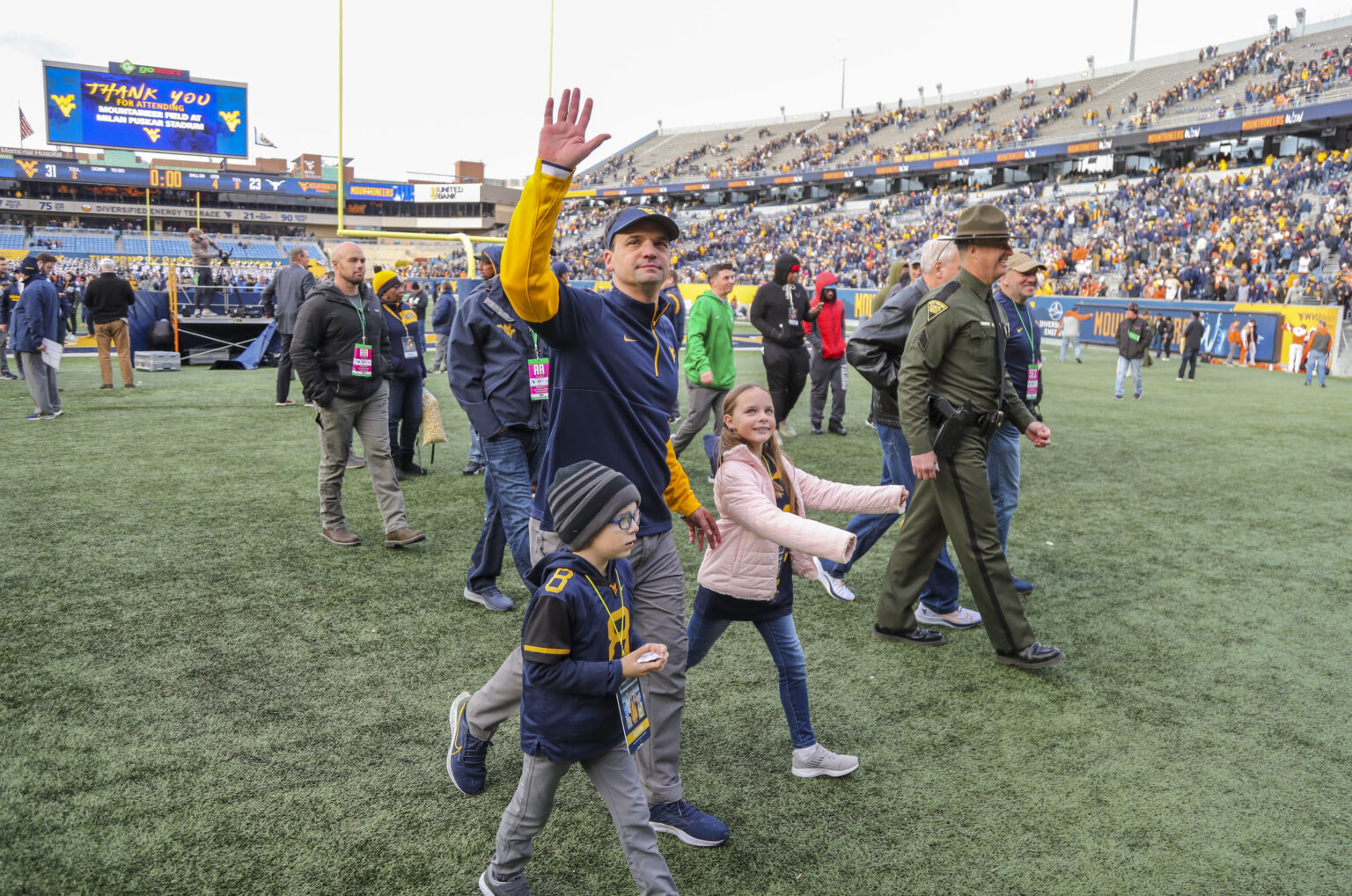 MORGANTOWN, W.Va. — There was only one turnover between Texas and West Virginia in Saturday’s home finale at Milan Puskar Stadium. It went a long way toward keeping the Mountaineers’ bowl eligibility hopes alive.

In his last dance at Mountaineer Field, safety Sean Mahone intercepted a Casey Thompson pass on fourth-and-8 from the West Virginia 30-yard line, helping the Mountaineers preserve a 31-23 victory in front of 48,755.

“It was a really good win for us,” said WVU head coach Neal Brown after earning his first victory against Texas in his third try. “It gets us to five [wins], keeps us alive for another week and puts extra meaning on that game [at Kansas] when we travel to Lawrence next Saturday.”

Mahone returned the interception 15 yards, which combined with a Texas penalty on the runback, allowed WVU to start 1 yard shy of midfield.

The Mountaineers (5-6, 3-5) picked up one key first down, before turning the ball over on downs when Brown elected to go for a fourth-and-5 from the Longhorns’ 36 with 43 seconds remaining.

“Kick a field goal, you bring a block into the equation and our protection had some issues,” Brown said. “You run the ball, doesn’t help time wise. We had a punt blocked last week and they‘ve blocked four punts. We felt they would play for the run and called a play for a touchdown or incompletion. They had a long way to go and had to get a touchdown and two-point conversion.”

Without a timeout, Texas needed 64 yards in 36 seconds. The Longhorns passed four times for a total of 4 yards, and Hudson Card’s incompletion on fourth-and-6 sealed Texas’ sixth straight loss.

“We had a good game plan and put guys out there who wanted to make a play,” WVU senior linebacker Josh Chandler-Semedo said. “Unselfish guys who work hard and want to get to the ball.“

In perhaps its cleanest offensive performance of the season, West Virginia ran 87 plays without a turnover.

Doege’s 20-yard touchdown pass to Sam James started the scoring after an opening 75-yard drive left the Mountaineers with a 7-0 lead.

Texas (4-7, 2-6) punted without picking up a first down on its first three series, though the Longhorns’ defense forced WVU to punt on two straight possessions after the opening score.

“It’s just a team effort. The protection was good. Receivers made plays and I threw the ball well,” Doege said. “When that happens, we can convert those long third downs.”

The Longhorns didn’t get their initial first down until their fifth possession, but it helped lead to Keilan Robinson’s 49-yard TD run that cut their deficit in half.

Cameron Dicker brought Texas to within 11 with a 50-yard field goal 1:13 before halftime, and the score stayed 21-10 when Casey Legg missed a 48-yard field goal try on the second-to-final play of the half.

The stat sheet suggested the advantage should have perhaps been greater as WVU held a 301-135 advantage in total yardage and over two quarters, Texas didn’t convert on five third-down attempts, while the Mountaineers picked up 6-of-10 tries.

The teams traded punts to start the third quarter, before Texas got a 52-yard touchdown pass from Card to Xavier Worthy, cutting WVU’s lead to 21-17 at the 5:40 mark of the third quarter. Card took over at quarterback to start the second half after Thompson hit on 4-of-12 passes for 29 yards through two quarters.

Just as Texas got its deficit to four, the Longhorns appeared to seize all the momentum after sacking Doege on the first two plays of WVU’s ensuing sequence. However, on third-and-18, Doege found Wright for a 19-yard gain.

“Ultimately, we were never really able to flip the field,” Texas coach Steve Sarkisian said. “When we could not get those third-down stops, not only could we not flip it, but then they went and scored on a couple of those drives. Clearly, it’s frustrating because we had the momentum and we were able to take it back. We couldn’t get off the field.”

Following runs of 26 and 18 yards by Brown, Doege tossed a 7-yard touchdown to Sean Ryan, upping the Mountaineers’ advantage to 28-17 with 29 seconds left in the third.

“When we win these type of games and when I have good games on the stat sheet throwing the ball well, it’s all because of the running game,” Doege said.

The Longhorns answered with a successful drive, rushing for 41 yards and passing for 31, and producing what proved to be their final points on Roschon Johnson’s 6-yard TD run. Card’s pass on the two-point attempt was incomplete, leaving West Virginia with a 28-23 lead.

Legg’s 45-yard field goal with 7:03 left extended the Mountaineers’ advantage to 31-23 and was followed by Mahone’s interception a short time later. Card played quarterback for most of the drive that ended with the turnover, but after being banged up, Thompson took over and was intercepted on his first attempt of the second half.

“This being my last game, it’s something I’ll always remember,” Mahone said. “It means a lot to the program and my teammates.”

WVU converted 12-of-20 third downs, while Texas was successful on only 2-of-10 attempts.

Doege passed for 290 yards and three scores, hitting on 27-of-43 throws. Brown made the most of his final home game and rushed for 158 yards on 33 carries.

Texas rushed for 203 yards, capitalizing on a Mountaineer defense that displayed a lot of dime package designed to prevent long pass plays in large part because of personnel.

Robinson rushed for 111 yards on nine carries and Johnson gained 77 yards on 15 attempts.

“It hurt us against the run, but we did a great job not allowing explosive plays,” Neal Brown said.

WVU looks to become bowl eligible and finish the regular season .500 next Saturday night at Kansas.

“It’s never too late to play quality football,” Neal Brown said. “Time is running thin, but it’s not too late.”