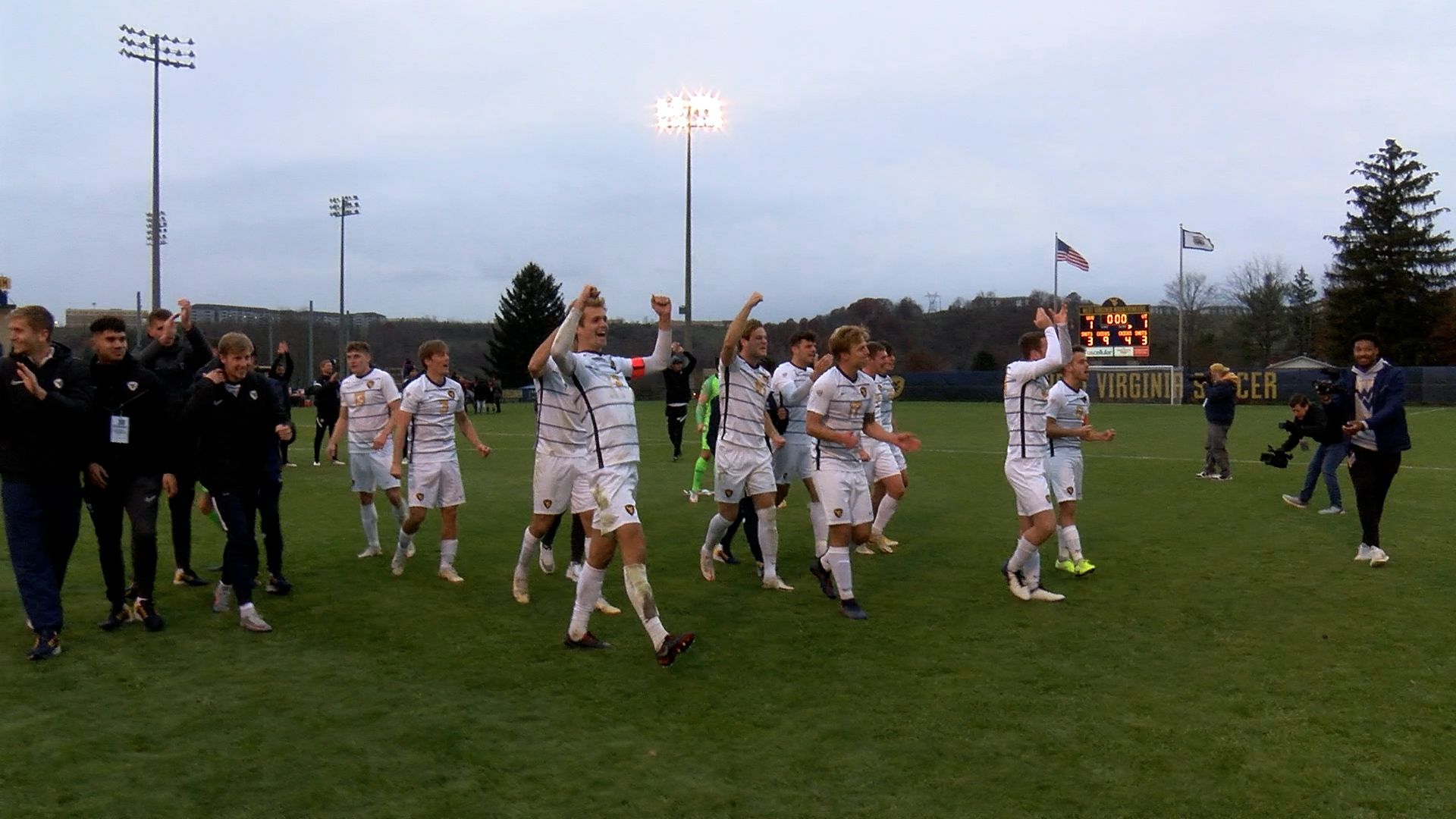 MORGANTOWN, W.Va. — WVU senior goalkeeper Steve Tekesky saved a pair of shots in a penalty kick shootout to lift the Mountaineers over Virginia Tech in the second round of the NCAA Tournament. After 110 minutes of play yielded a 1-1 draw, West Virginia defeated the Hokies 4-3 in the shootout.

“With respect to Virginia Tech, who are a good team, I still think the better team won,” said WVU head coach Dan Stratford. “I thought in the first half we were excellent, especially to start the game.”

The Mountaineers quickly jumped on the scoreboard in the seventh minute. Fairmont Senior High School graduate Ike Swiger handled a cross in the penalty area and scored his second goal of the season from eight yards out.

“I was surprised that there was so much space. I knew Pau was coming up on my left shoulder and I screamed at him, ‘No!’ because I wanted it,” Swiger said.

The Mountaineers led 1-0 at halftime but the Hokies (11-5-4) drew even in the 56th minute. A giveaway from WVU was collected by Jacob Labovitz. He converted his ninth goal of the season. That would be the final goal in the 110-minute match. A five-round penalty kick shootout would determine the winner.

“We had a five in mind. That five shrank quite quickly when it came to the crunch. At the end of the day you want the players to want to take the penalty. So we had to adjust the list a little bit. They are never easy. As someone who has played for this university, scored and regrettably missed, I know that they are not easy,” Stratford said.

Both teams converted on their first two attempts. Tekesky made saves in the third and fourth rounds, setting the stage for the Mountaineers to close it out.

“You walk in with a lot of confidence and when you make a big save it really lifts yourself and other people to maybe do it again and keep the guys going,” said Tekesky. “It is not fun but sometimes it has to be done.”

Tied at 3-3 in the fifth round, Pau Jimenez Albelda stepped up to the spot with a chance to win it. He calmly converted into the upper right corner, setting off a celebration for the 1,017 fans in attendance.

“To be fair, I knew it was going to go in,” Jimenez Albelda said. “I had confidence in myself. To be honest, I am the one that practices [penalties] the most. Steven makes fun of me because he says that I mess up the PK spot on the practice field.”

The No. 11 Mountaineers (11-3-5) will travel to face No. 6 Tulsa Saturday at 7 p.m. This is West Virginia’s first appearance in the third round of the NCAA Tournament since 2007.

“This is just the beginning,” Stratford said. “This should feel like it is the beginning of a five-game run and five wins. I have been involved in enough of these types of games, with national championship runs and final fours to know we have everything that we need. It will be about the player’s mentality and the player’s belief. A truly think a day like today can actually help us, to know that we got through on penalties and faced some adversity.”

Sports
John Marshall advances to the Class AAA championship round with a 10-5 win over Lincoln County
By Joe Brocato
Sports
Boggess' second shutout of day lifts Winfield over Oak Glen, 1-0
Hours after Maci Boggess threw a complete game shutout in a win over Shady Spring, she followed it up with another one. The Generals needed every bit of this one in their 1-0 victory against the Golden Bears.
By Greg Carey
Sports
Mountaineers falter with runners on base, drop Big 12 Tourney opener to Oklahoma
WVU will face Kansas State Thursday in an elimination game.
By MetroNews Staff
Sports
Photo gallery: Jefferson shuts out Lincoln County, advances to Class AAA final
The Cougars will play in the championship round Thursday at 2 p.m.
By MetroNews Staff
View AllHoppy's Commentary