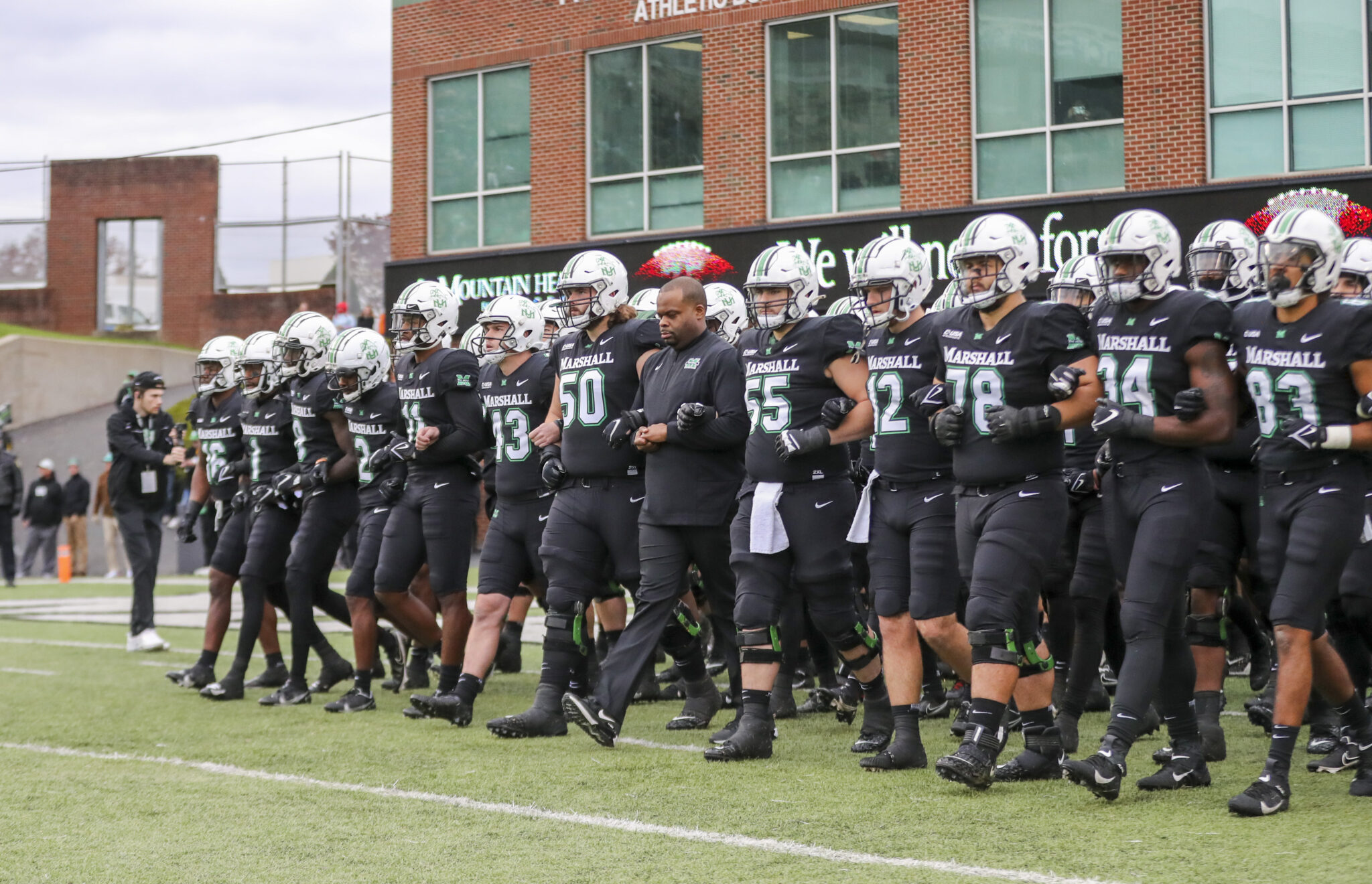 Marshall head coach Charles Huff and players walk onto the field together in memory of the players and coaches who died on the 1975 Marshall plane crash before their game against the UAB Blazers at Joan C. Edwards Stadium. Mandatory Credit: Ben Queen-USA TODAY Sports

HUNTINGTON, W.Va. — Football teams work year-round to ensure that season-ending games are ones of consequence.

That is the case on Saturday as Marshall hosts Western Kentucky in the regular-season finale for both squads.

Kickoff is set for 3:30 p.m. at Joan C. Edwards Stadium and the contest will be shown nationally on CBS Sports Network.

Marshall and Western Kentucky have developed one of the top rivalries in C-USA and third-year WKU head coach Tyson Helton appreciates the back-and-forth between players and fans.

“We’re just two really good schools, two competitive schools,” Helton said. “It’s fun to be in those type of games. Marshall does a great job. Their new coach has done a fantastic job. I always say Marshall is Marshall. Every year they’re just a really good football team. We are always excited to play them because it’s going to be an exciting game and a competitive game.”

Marshall’s first-year head coach Charles Huff has spoken about closing the gap that could lead to a league title and he says facing WKU this week allows the Herd to make a big jump in the process. However, Huff doesn’t want his team to feel any extra pressure this week.

“Ultimately, it’s a big game because it’s the next game in our journey and our journey is coming to an end,” Huff said. “We fully understand the ramifications of the game, but no different than any other game. Regardless of what happened this season, I told the team yesterday, ‘If we would’ve won every game by 300 points, this game would have the same implications.’ We still would have to go out and play really well against a really good opponent in order to continue our season.”

The pressure will be on both defenses to stop the high-powered offenses of Marshall and WKU.

WKU’s senior quarterback Bailey Zappe and his top receiver, junior Jerreth Sterns, are both transfers from Houston Baptist. Zappe has thrown for 4,640 yards this season with 48 touchdowns and only nine interceptions.

“The consistency speaks for itself,” Huff said. “Week in and week out you see consistency in production from him. You know, it’s not one week he goes for 450 and next week he throws for 100. Throughout the season, I think consistency has been really good and to me that’s what determines if you’re a good quarterback, good running back, good offensive linemen is your consistency overtime and he’s done that.”

Sterns has 123 receptions for 1,511 yards and 12 touchdowns. Sterns’ catches and receiving yardage are No. 1 nationally, while just three players have hauled in more TDs.

Huff was asked during his Tuesday media availability about reports that name him as a possible candidate for the head coaching job at Virginia Tech.

Huff said he has not been contacted about the job by VT officials, that his agent hasn’t contacted Tech and that he was not actively seeking the position.

Huff is confident any talk of other jobs won’t interfere with Marshall’s preparation for WKU and says it’s a complement to Marshall’s success.