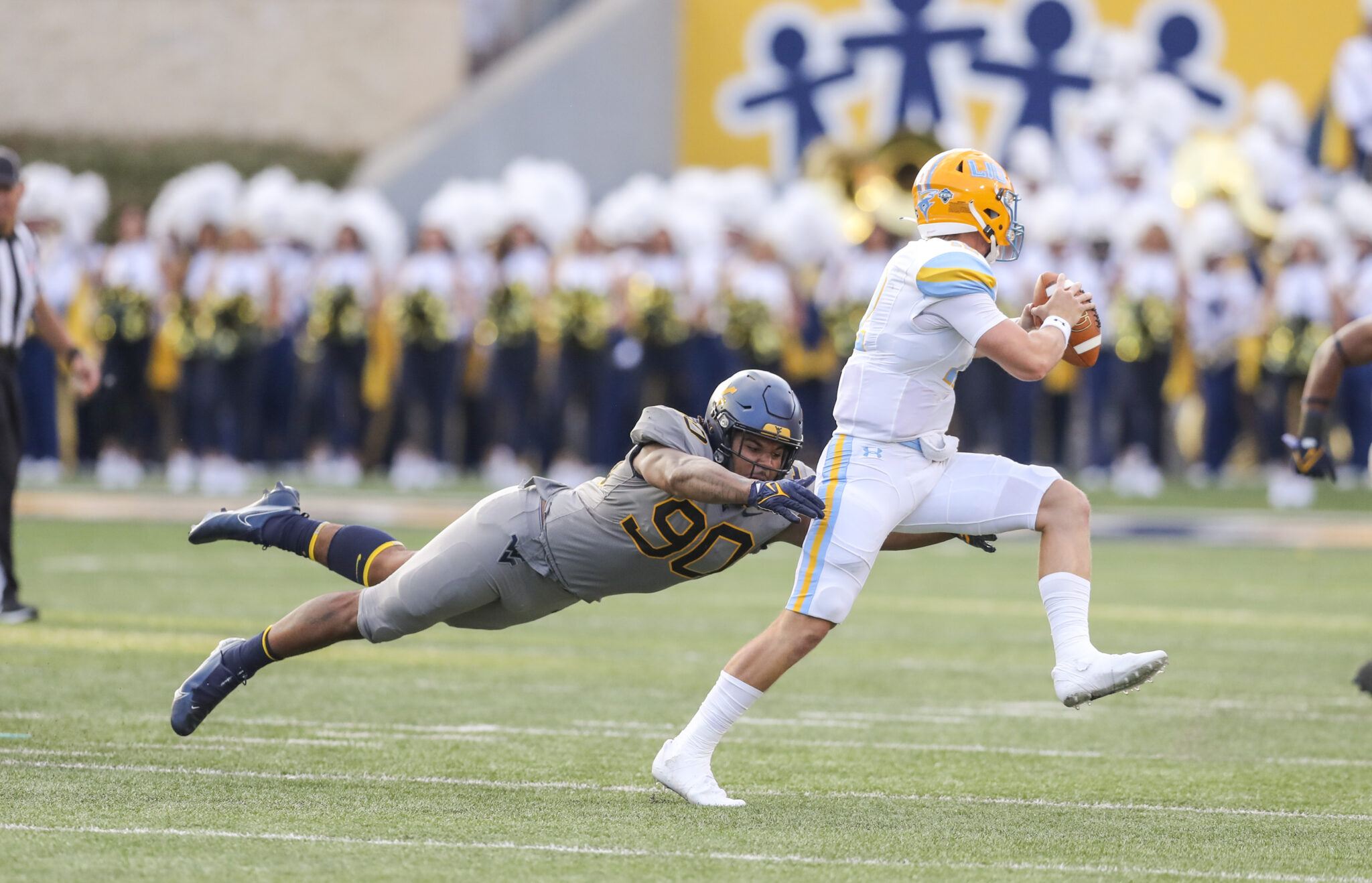 Having transitioned from defensive tackle and defensive end as a true freshman to nose tackle throughout the 2021 season, Mesidor is drawing far more double teams, making tackles and sacks tougher to come by.

That’s precisely what Mesidor has done, and the Ottawa, Ontario native is undoubtedly filling his role to the liking of West Virginia’s coaching staff.

“If I look at the production, it’s probably down a little bit,” WVU defensive coordinator Jordan Lesley said. “I don’t know the exact numbers, but a lot of what we’re asking him to do is not fair to him. If you look at a lot of plays other guys are making, a lot of it is because of the skill set that he is getting on the interior, whether it’s against the run game or a pass rush.”

To illustrate his point, Lesley referenced Sean Mahone’s interception of a Casey Thompson pass that all but sealed West Virginia’s 31-23 win over Texas last Saturday.

The common fan likely viewed it as a poor pass by Thompson and a quality play by Mahone, both of which it was. But it’s entirely possible neither occur without the pressure Mesidor generated to affect the throw.

“We put in a pass rush that we normally do not do where guys really don’t have a certain responsibility,” Lesley said. “They’re working off of a guy on their side. So Akheem reads the protection and he ends up right in Thompson’s line of sight with his hand up, which the ball goes a foot higher and he sails it because of his hand.

“That was just what he needed to miss his receiver and hit Sean Mahone. All he had to do was catch the ball. A great play by Sean, but it was caused by Akheem Mesidor. I’m the only one that’s going to know that and point out to him, it’s not going to show up on a stat sheet. It goes back to having defensive linemen understand not every successful pass rush is a sack.”

WVU DC Jordan Lesley says Akheem Mesidor made the play at the point of attack: pic.twitter.com/DWXcqFk9dE

Mesidor was well aware how close he was to sacking Thompson and what his rush did in causing the errant throw.

“Felt like I was a few inches away and when I looked at it on film, I was maybe two or three feet away,” Mesidor said. “If he would’ve held the ball a little bit longer, a half second or so, I think I would’ve got there. I think I affected the pass. I hope they can give me a little bit of credit.”

A year ago, Mesidor was one of the better true freshman defensive players in all of college football. He finished with 32 tackles, 6.5 TFLs and five sacks.

Mesidor had 2.5 TFLs through two games, before being credited with a half tackle for loss over the next four contests.

“My production seems like it has been not as well as it was at the beginning of the year, but as a nose guard you get double-teamed 90 percent of the game,” Mesidor said.

Mesidor will look to aid West Virginia’s defense in its effort to slow down Kansas at 7 p.m. Saturday.

While the Jayhawks (2-9, 1-7) are assured of no better than tying for a last-place finish in the Big 12 Conference, they enter playing their best football this season having scored 84 points over their last two games.

West Virginia’s soul focus is on finding a way to win, which would allow the Mountaineers to qualify for a bowl game with six victories.

“Having no school [this week] gives you the opportunity to take better care of your body, be in the film room longer and do a lot more edge work,” Mesidor said. “Just prepare a lot more than you usually do for a football game.”