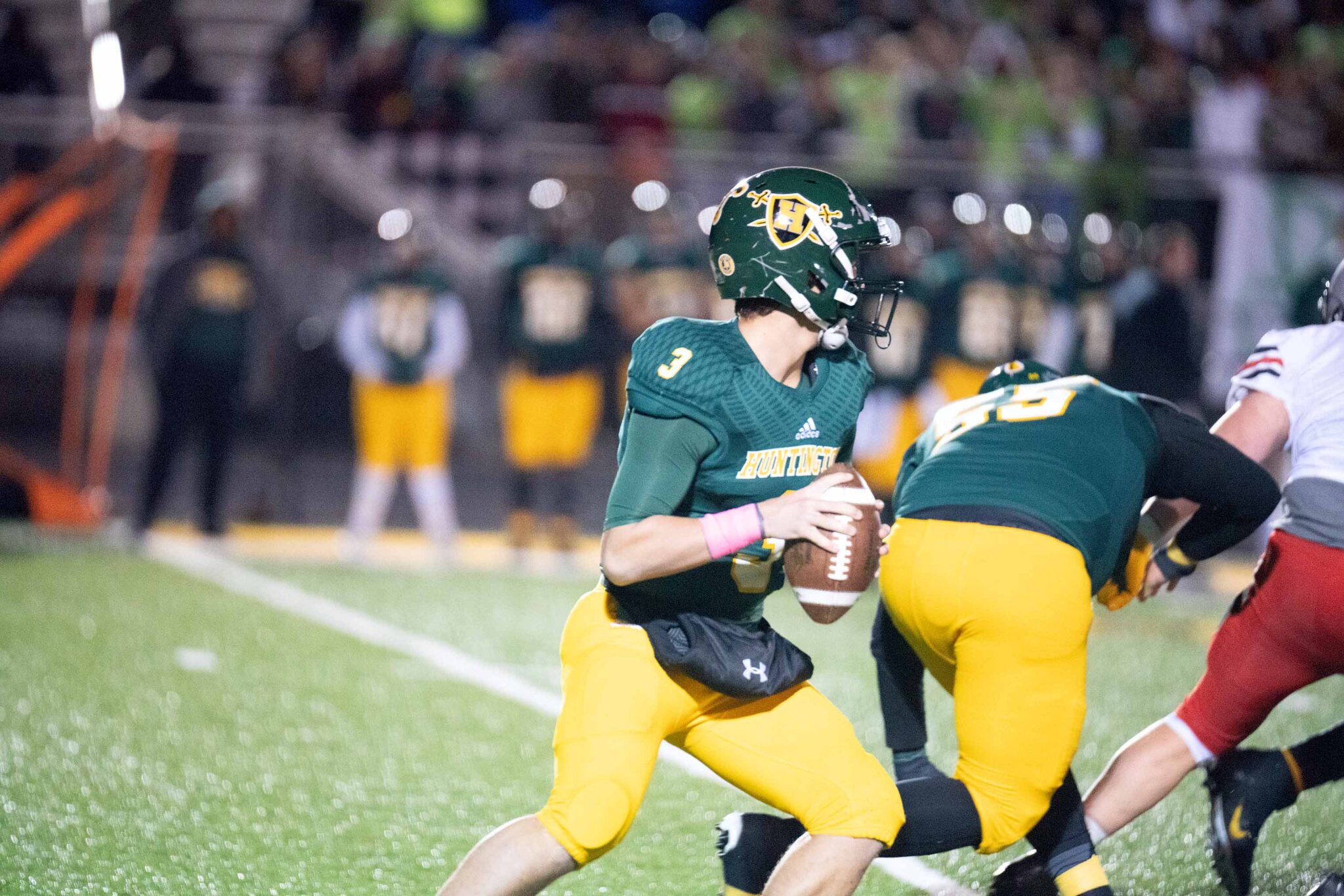 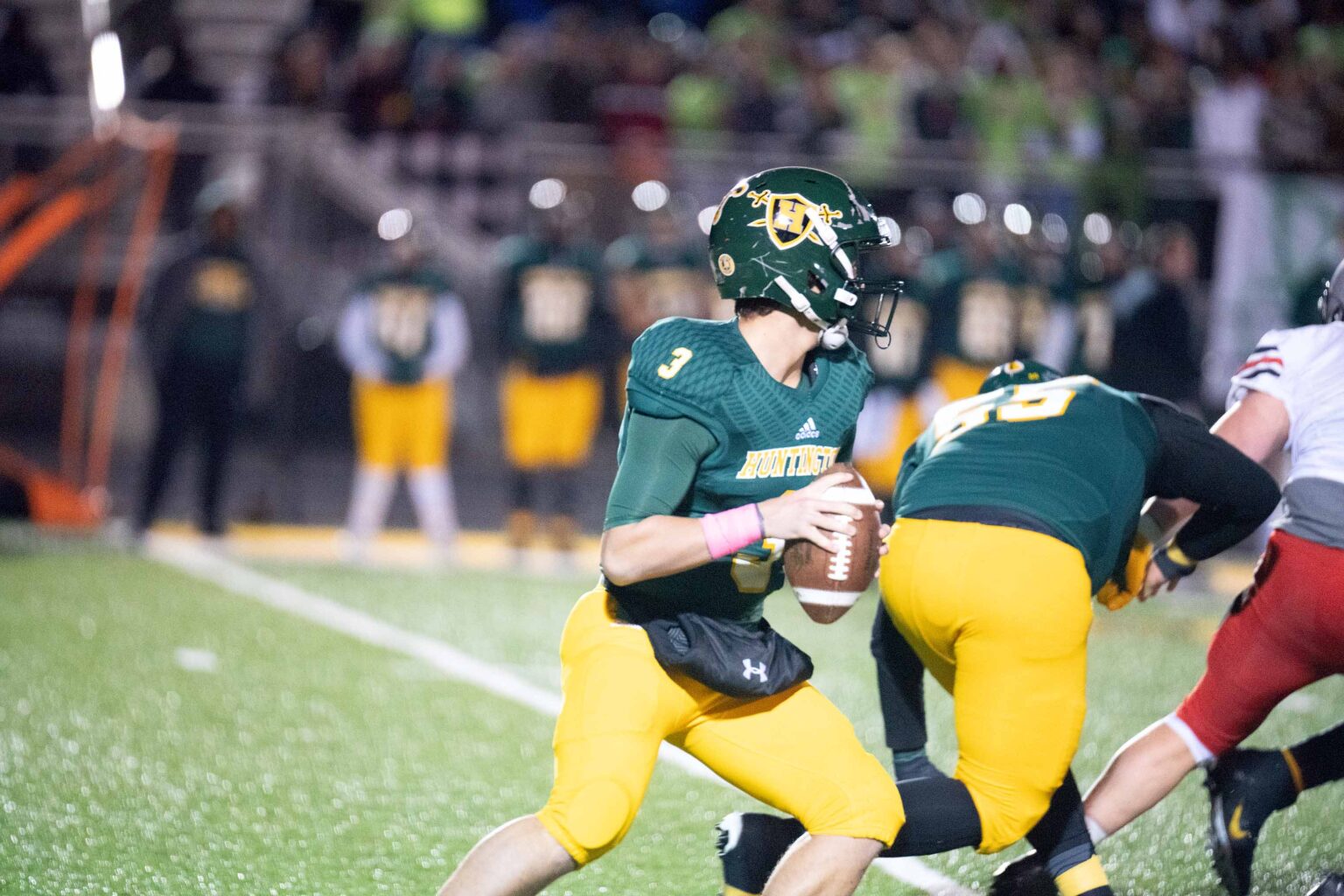 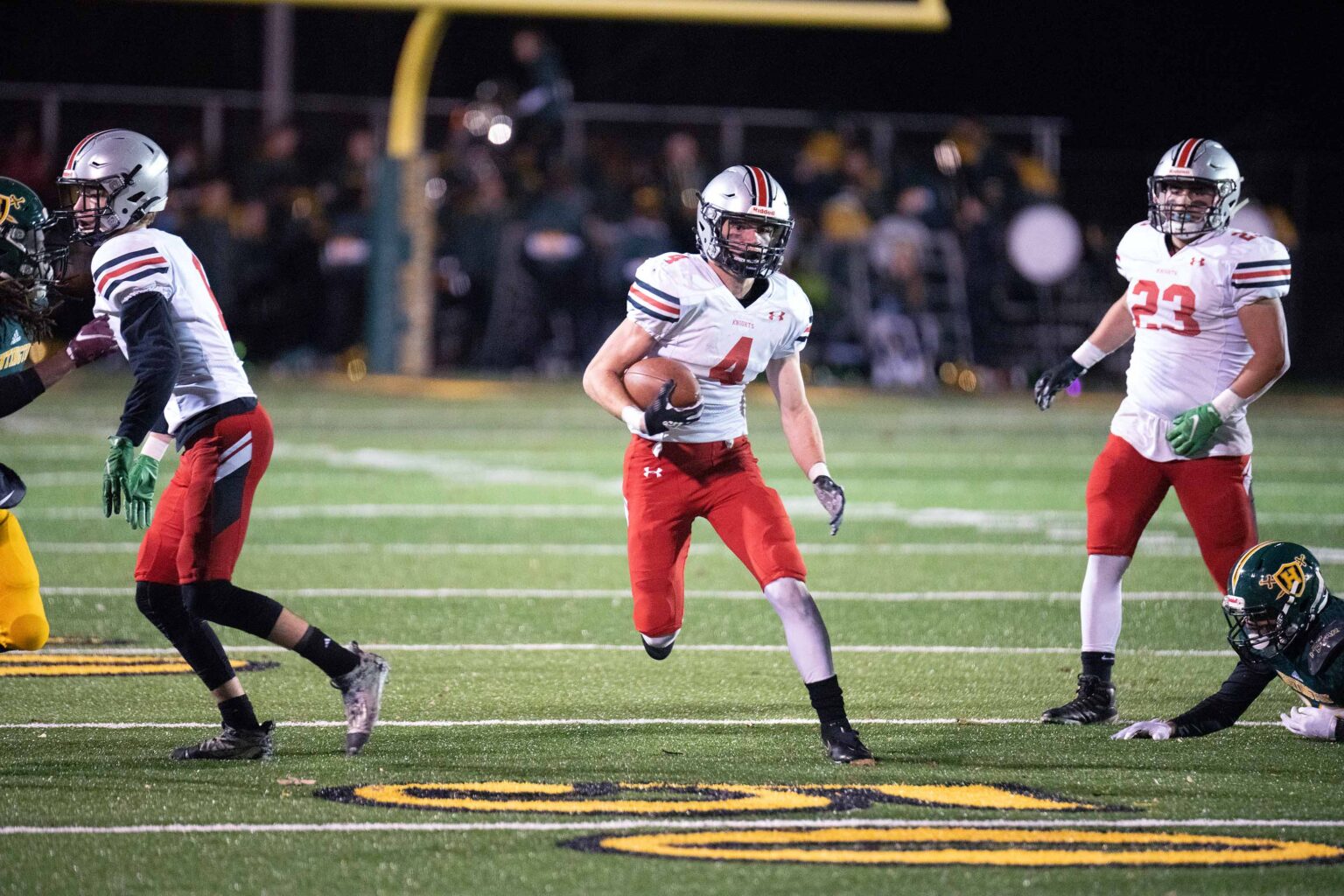 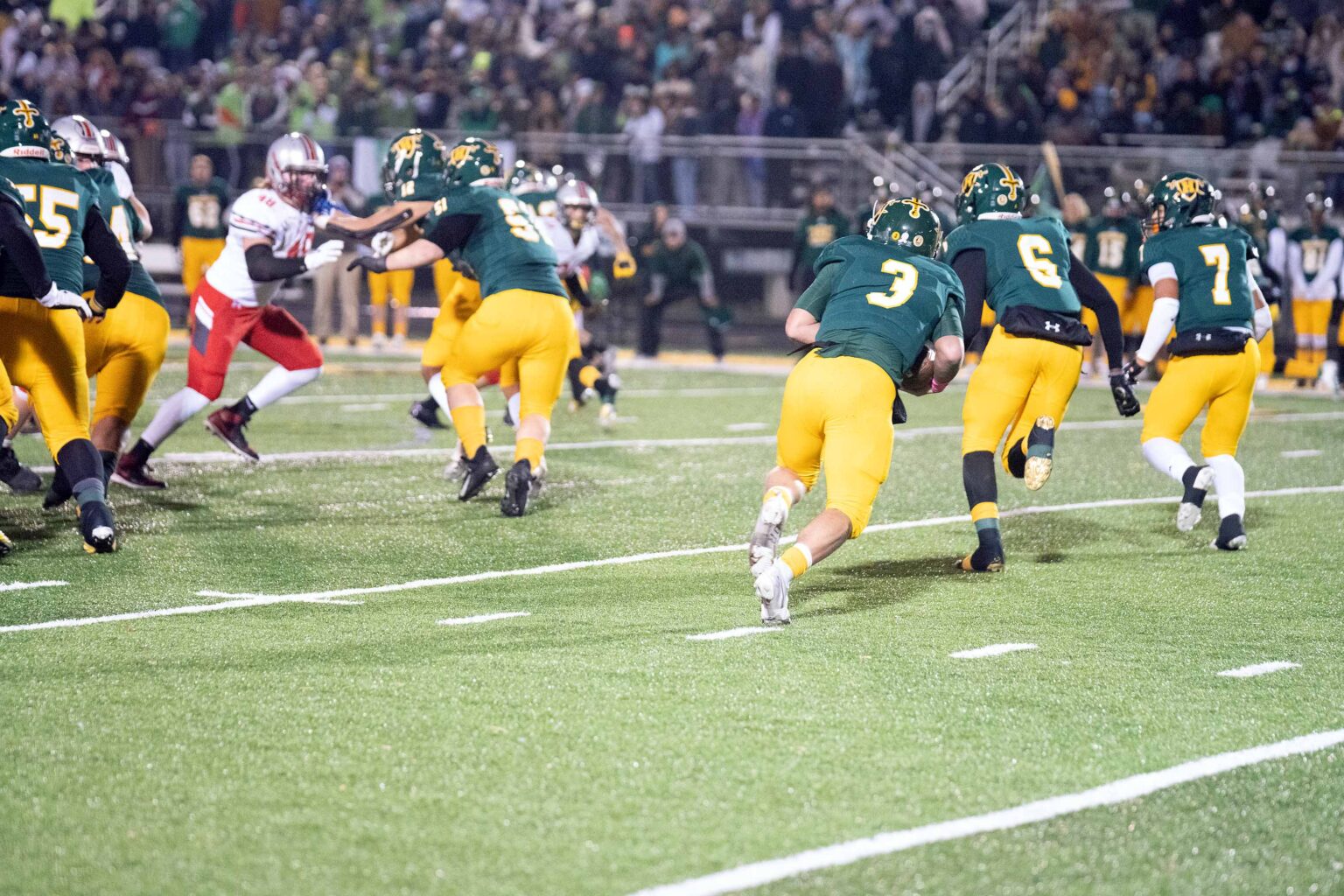 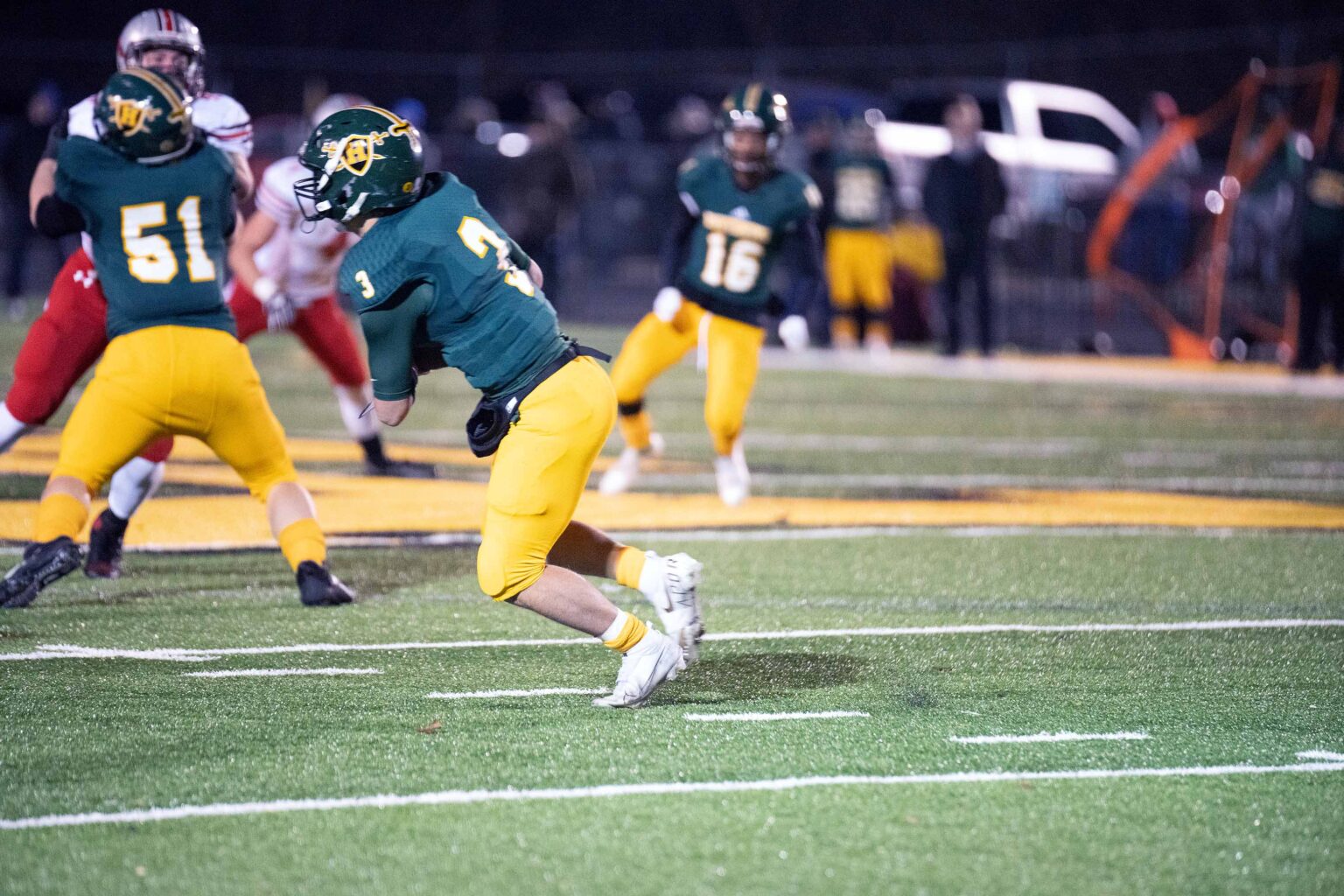 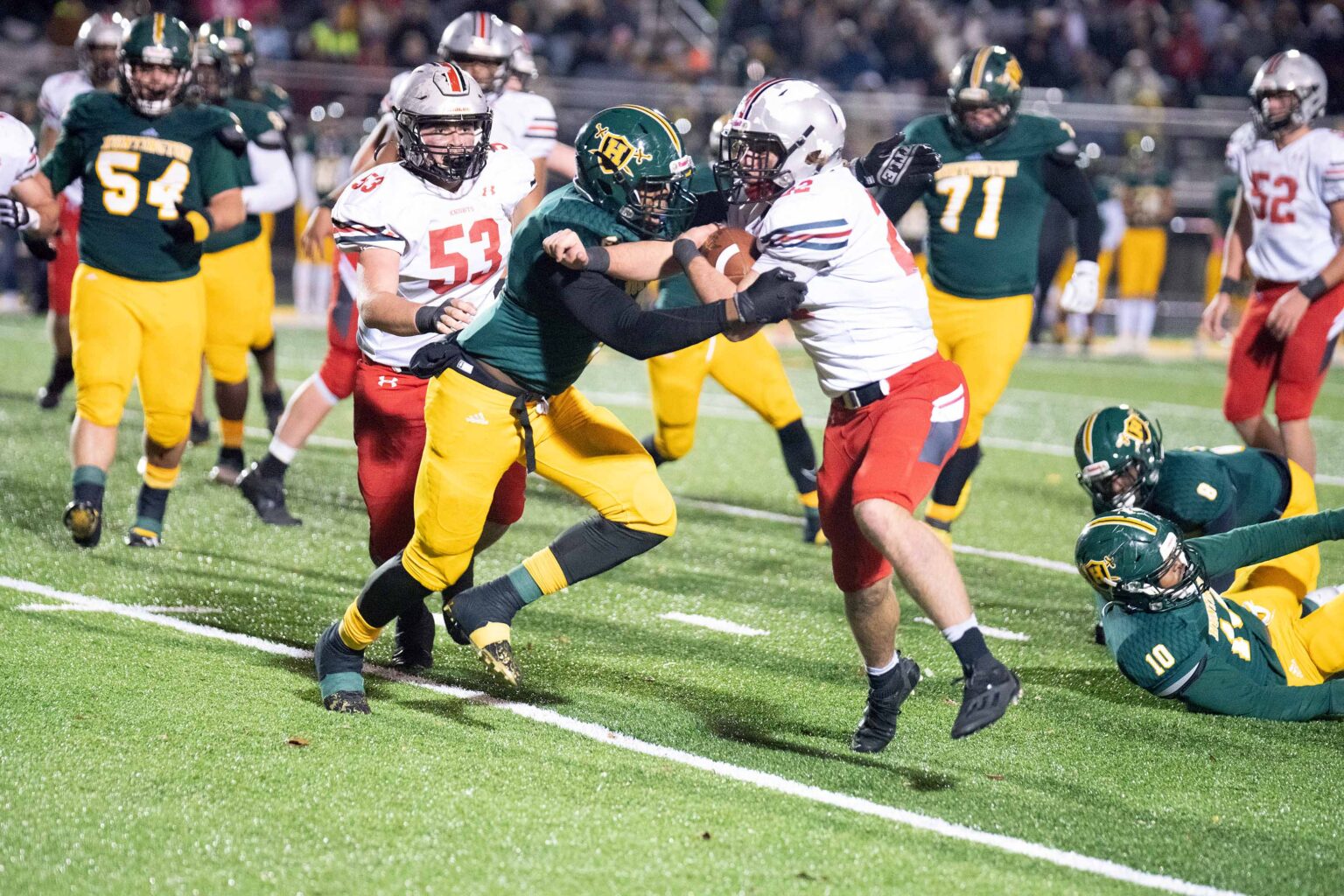 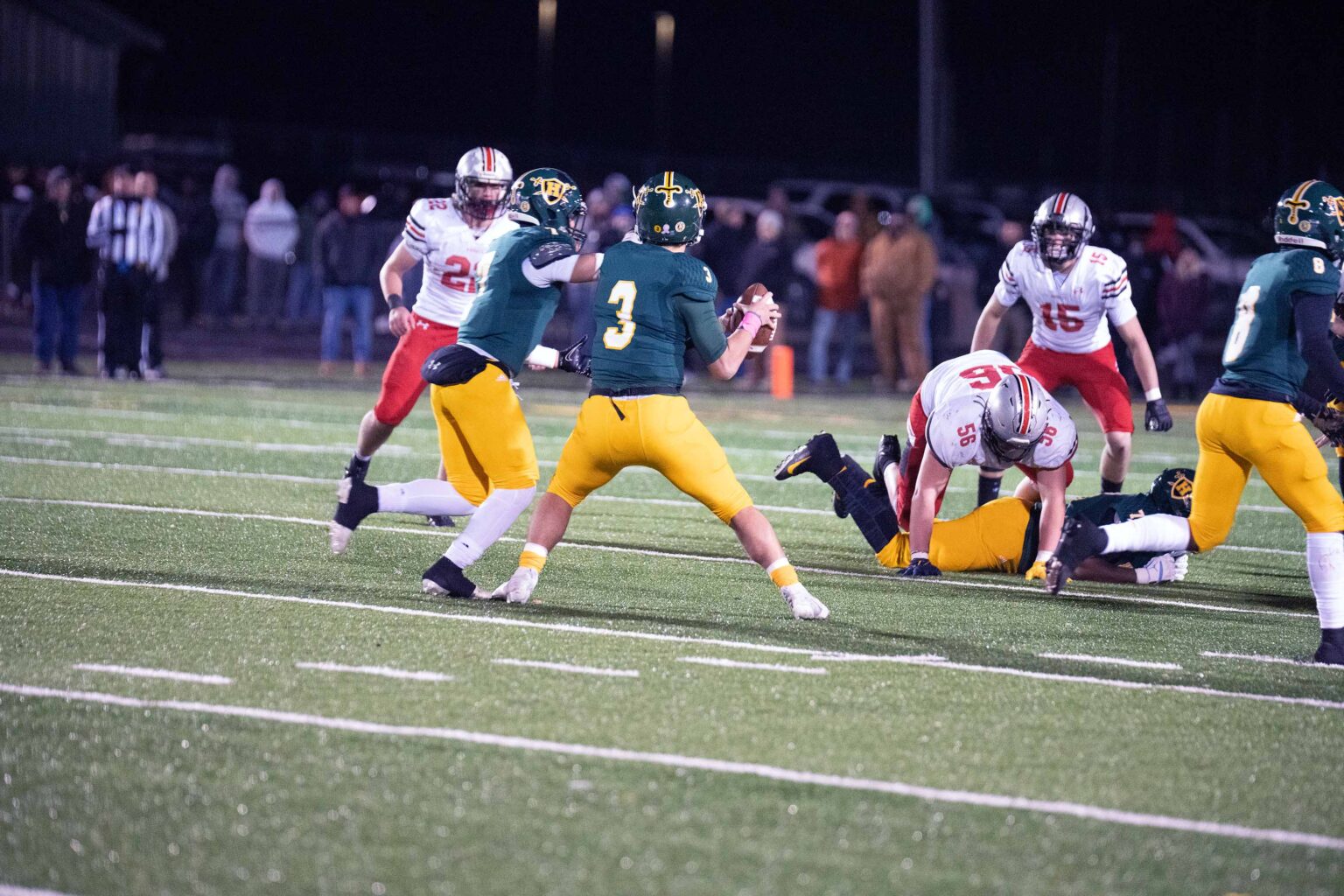 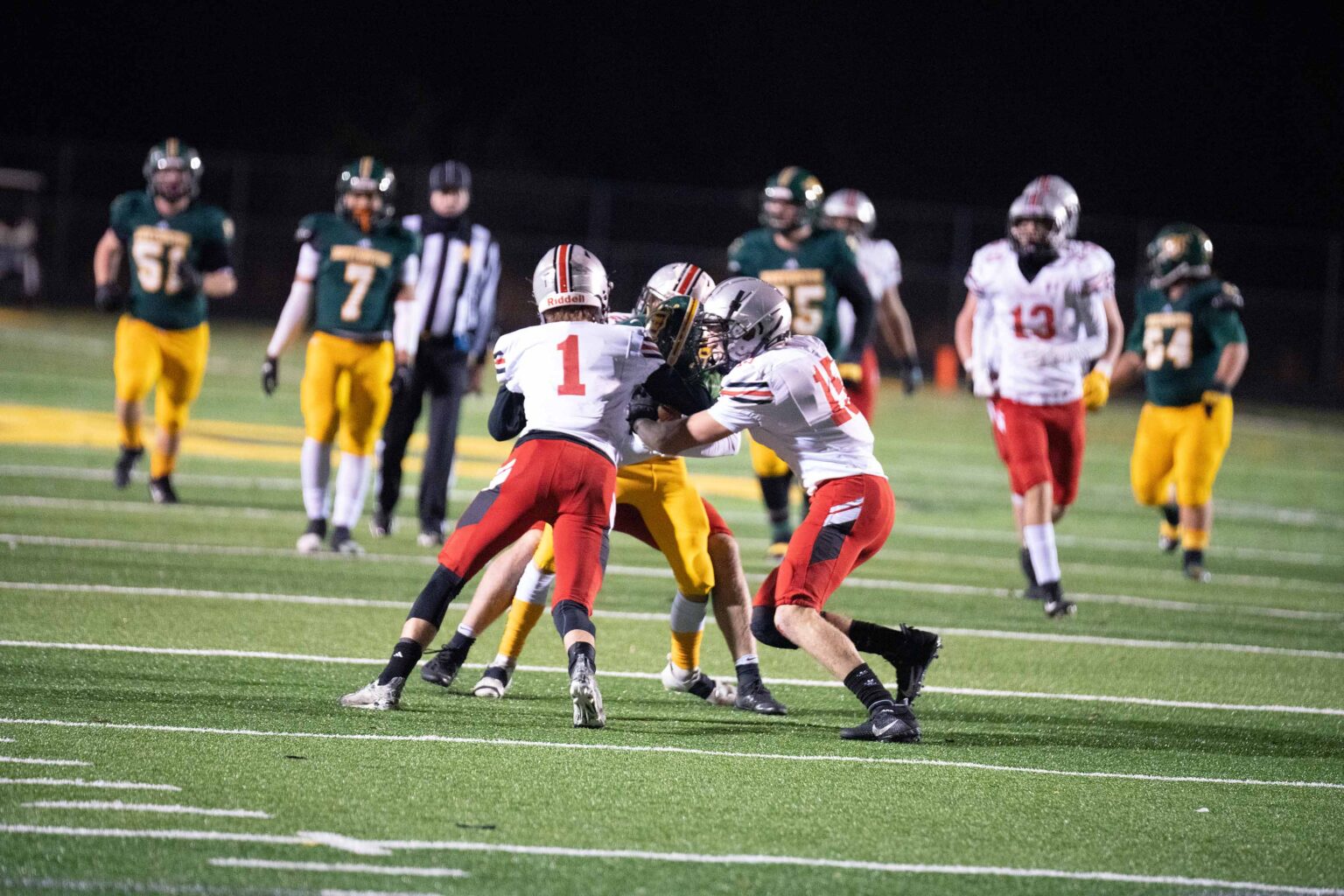 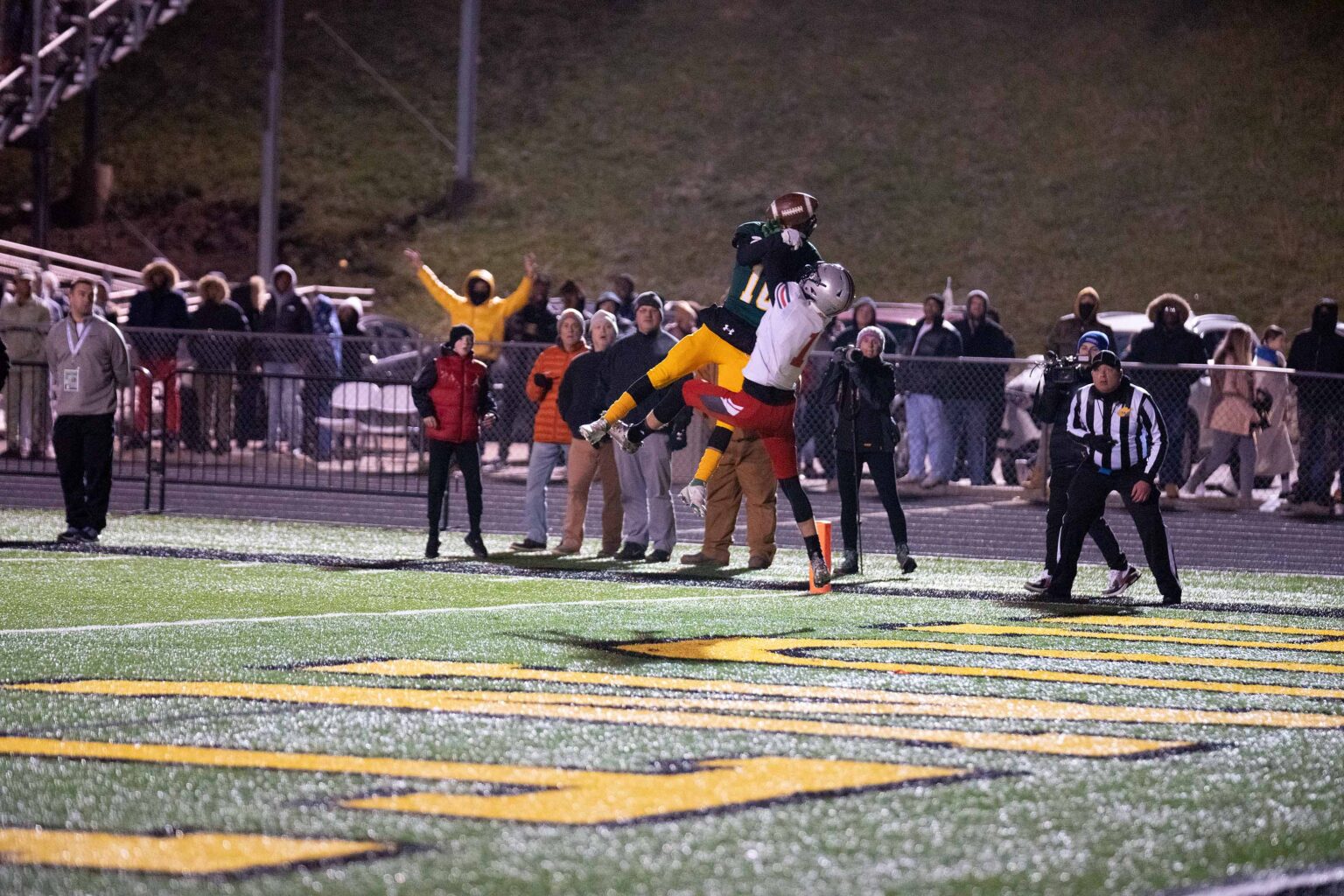 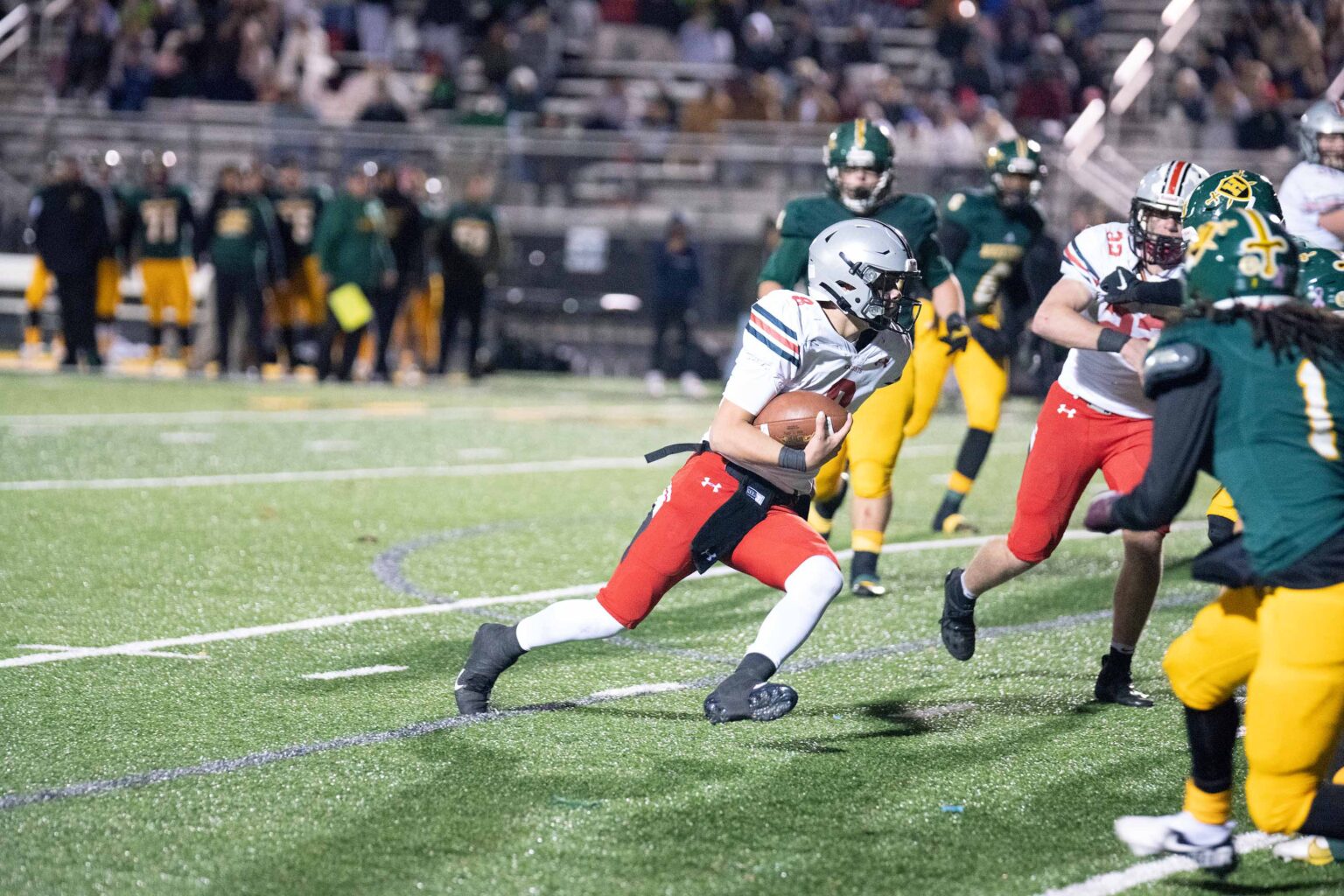 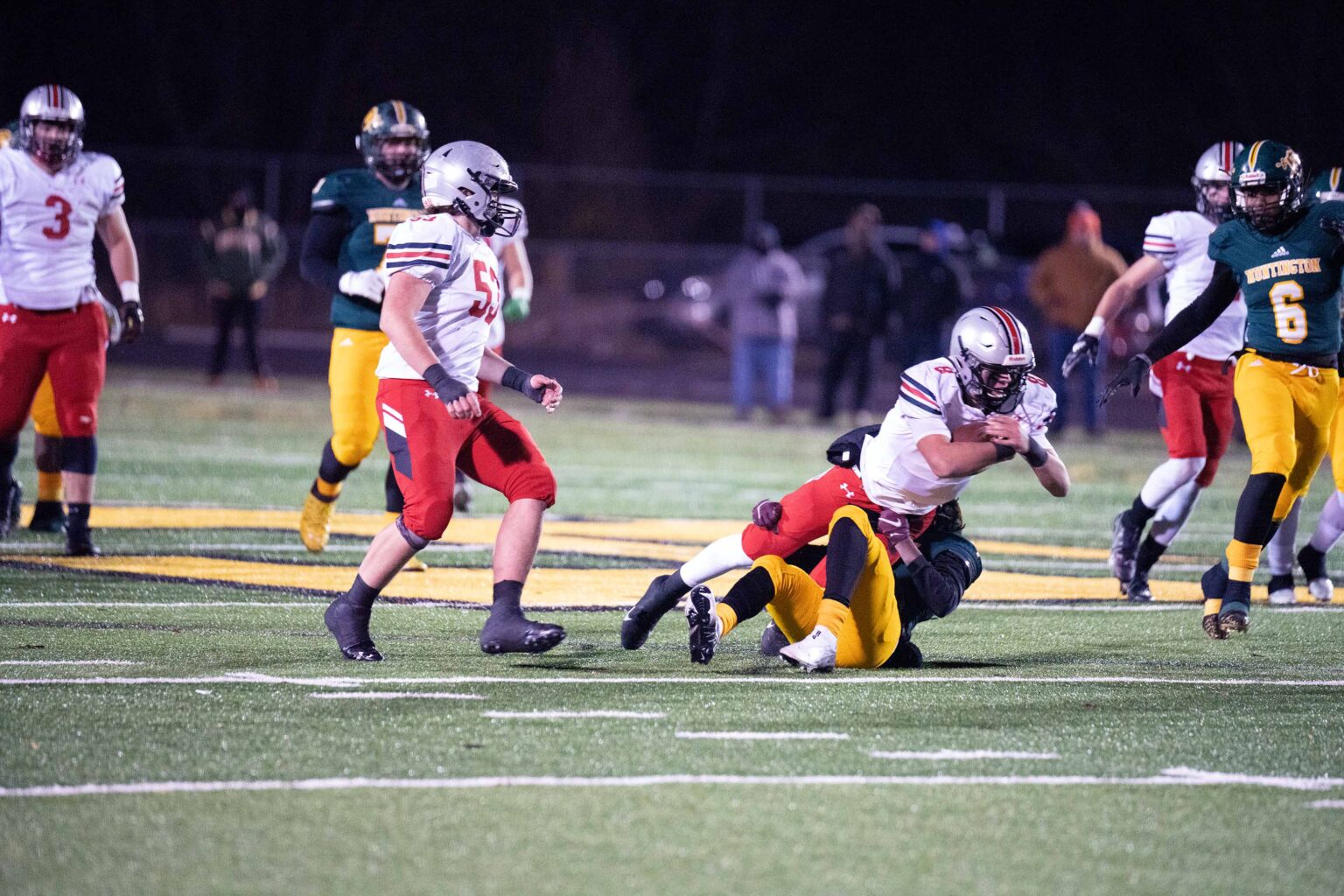 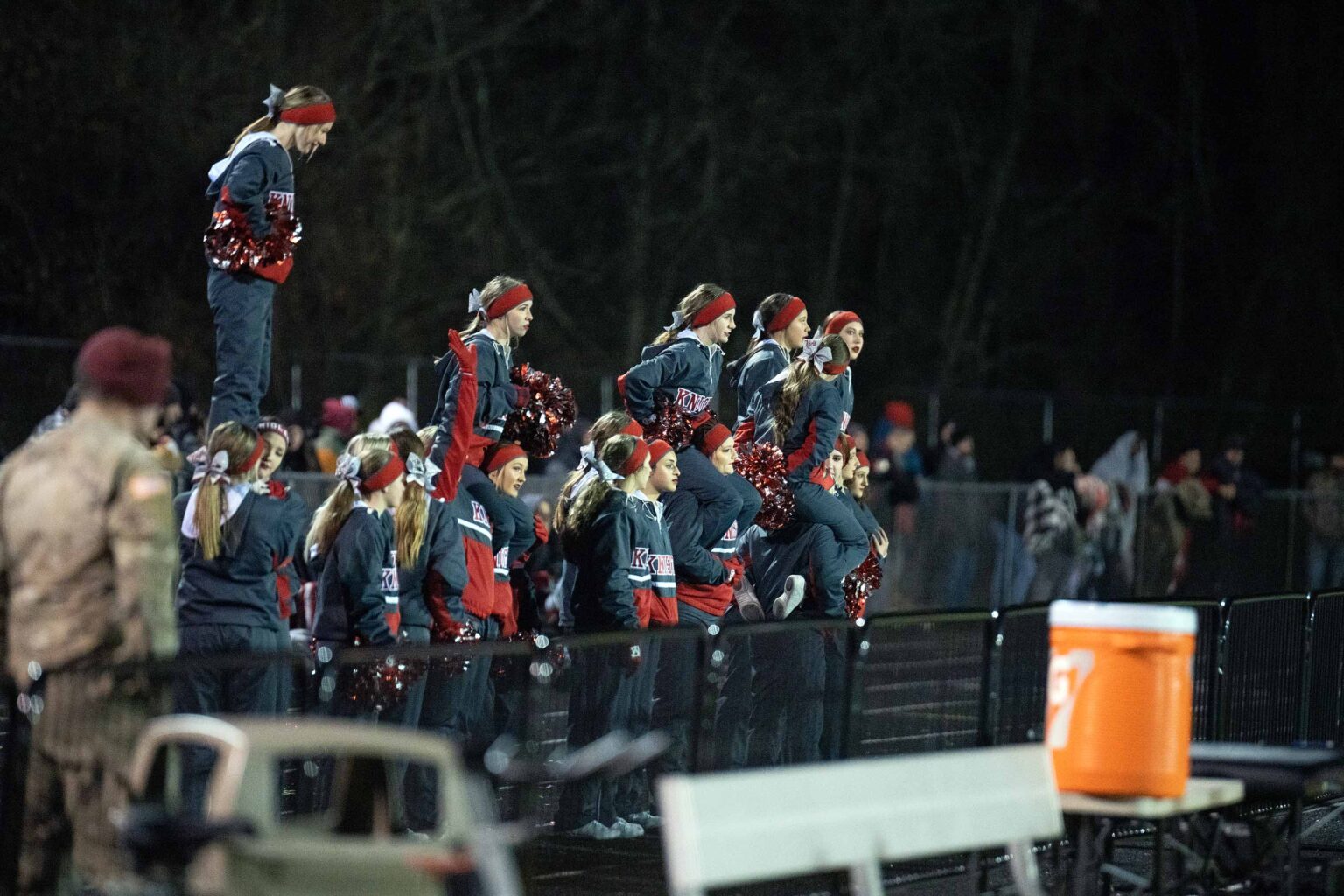 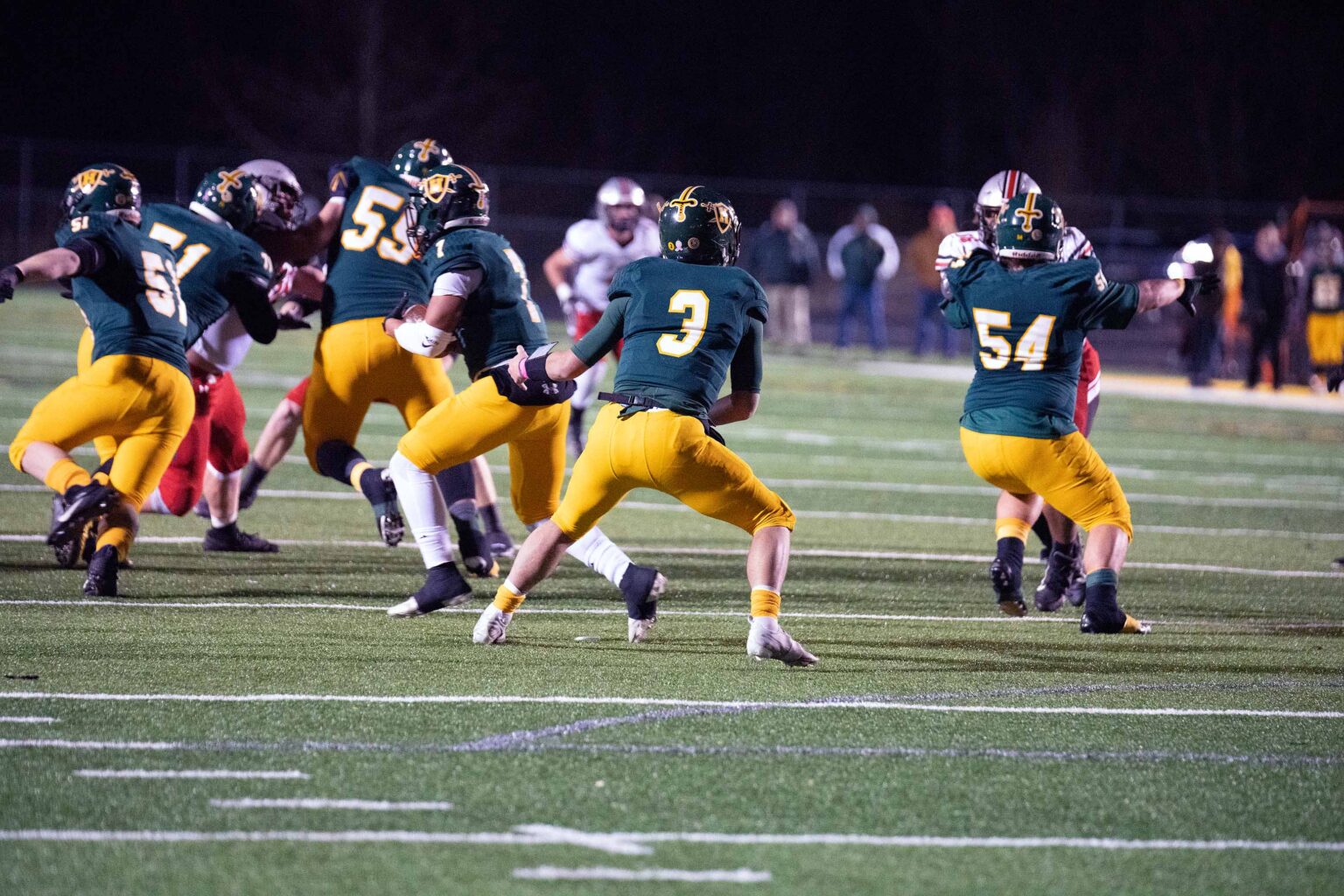 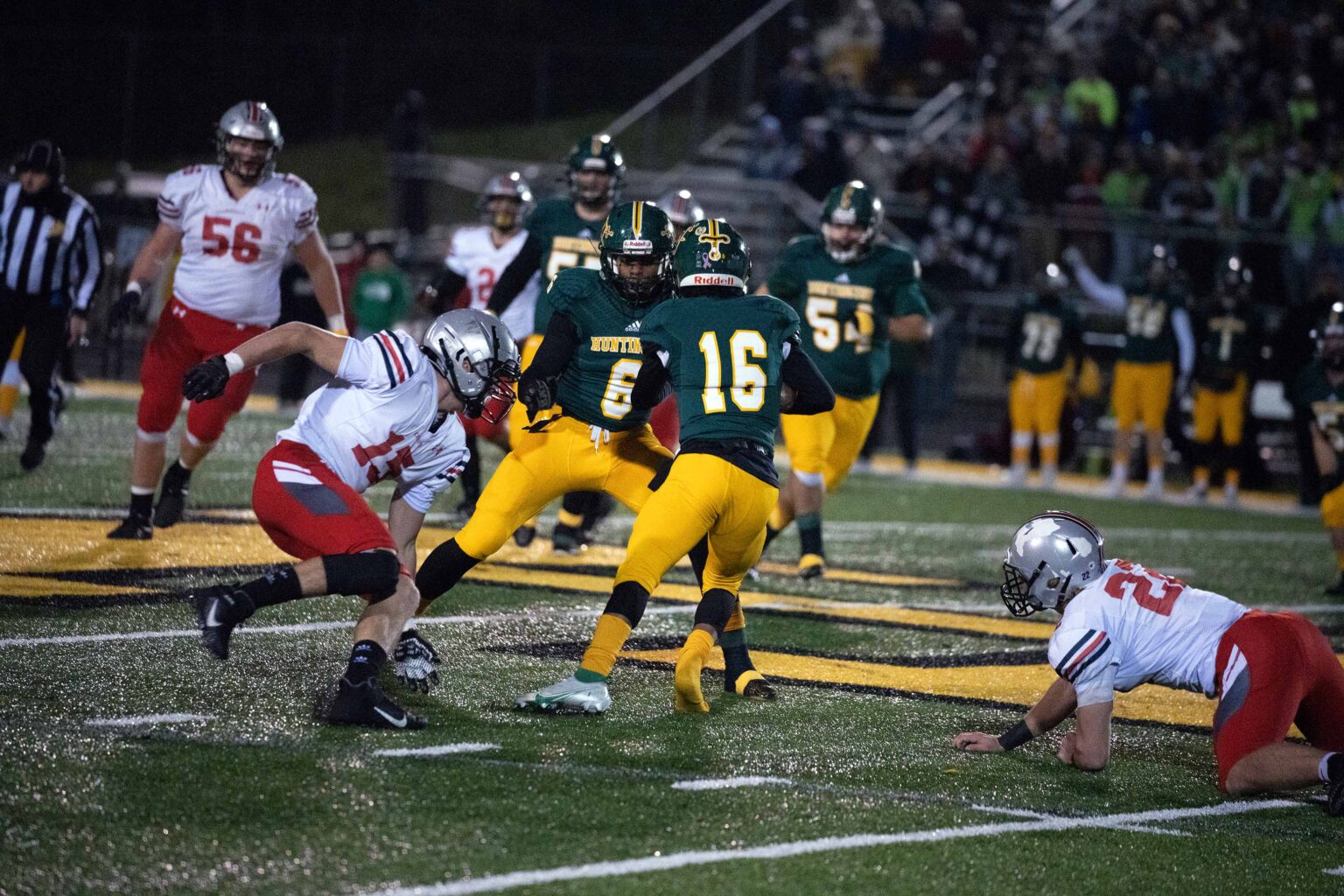 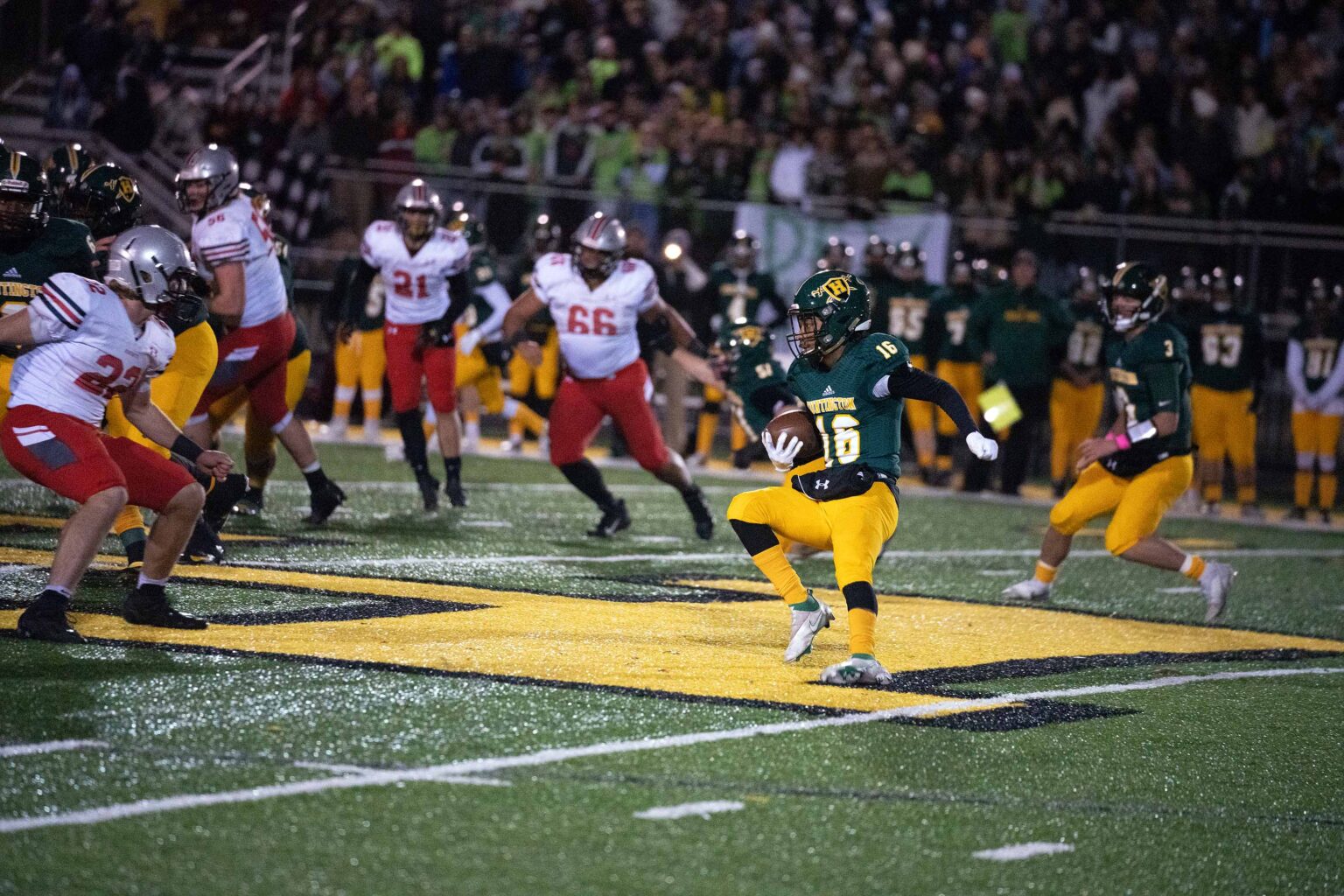 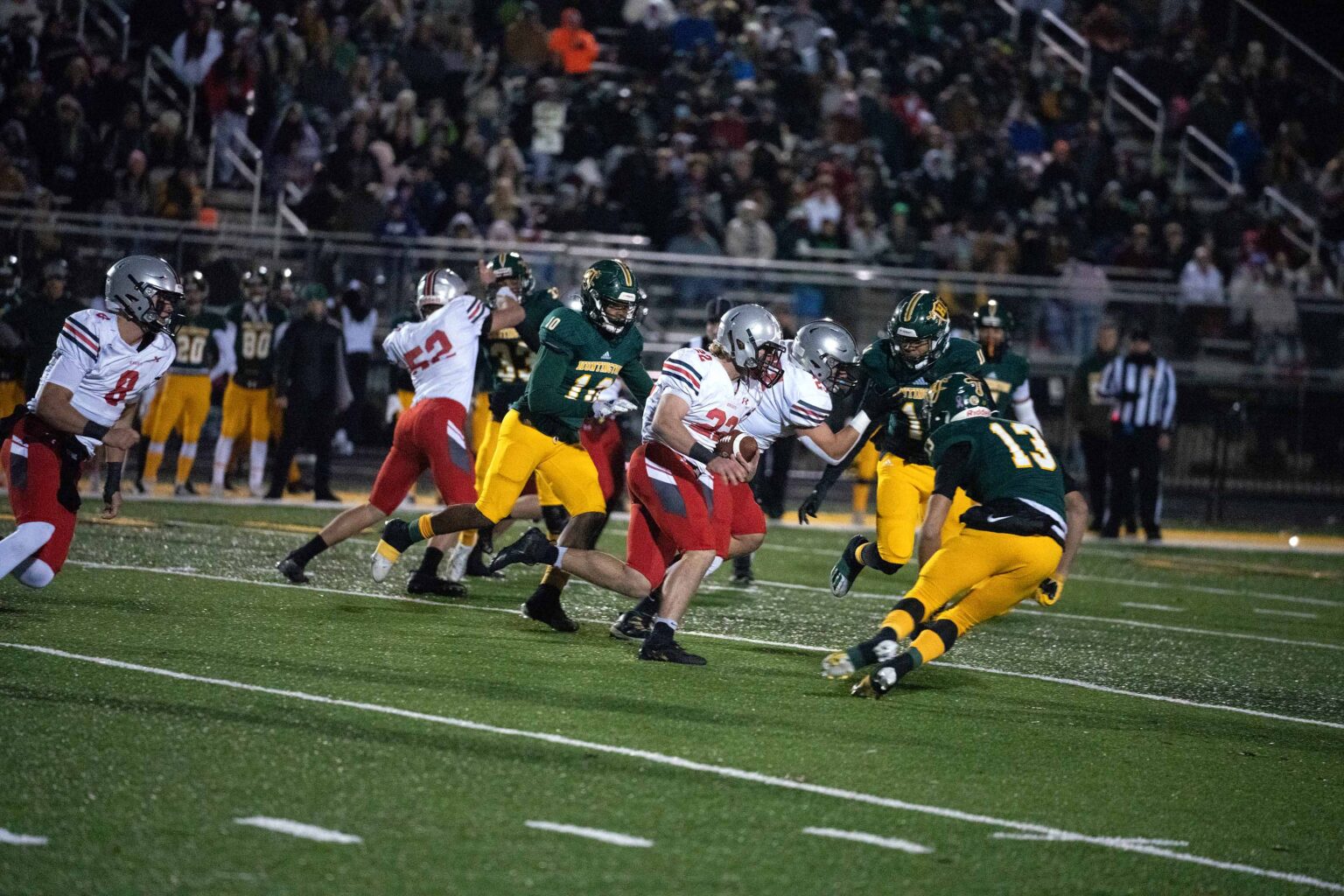 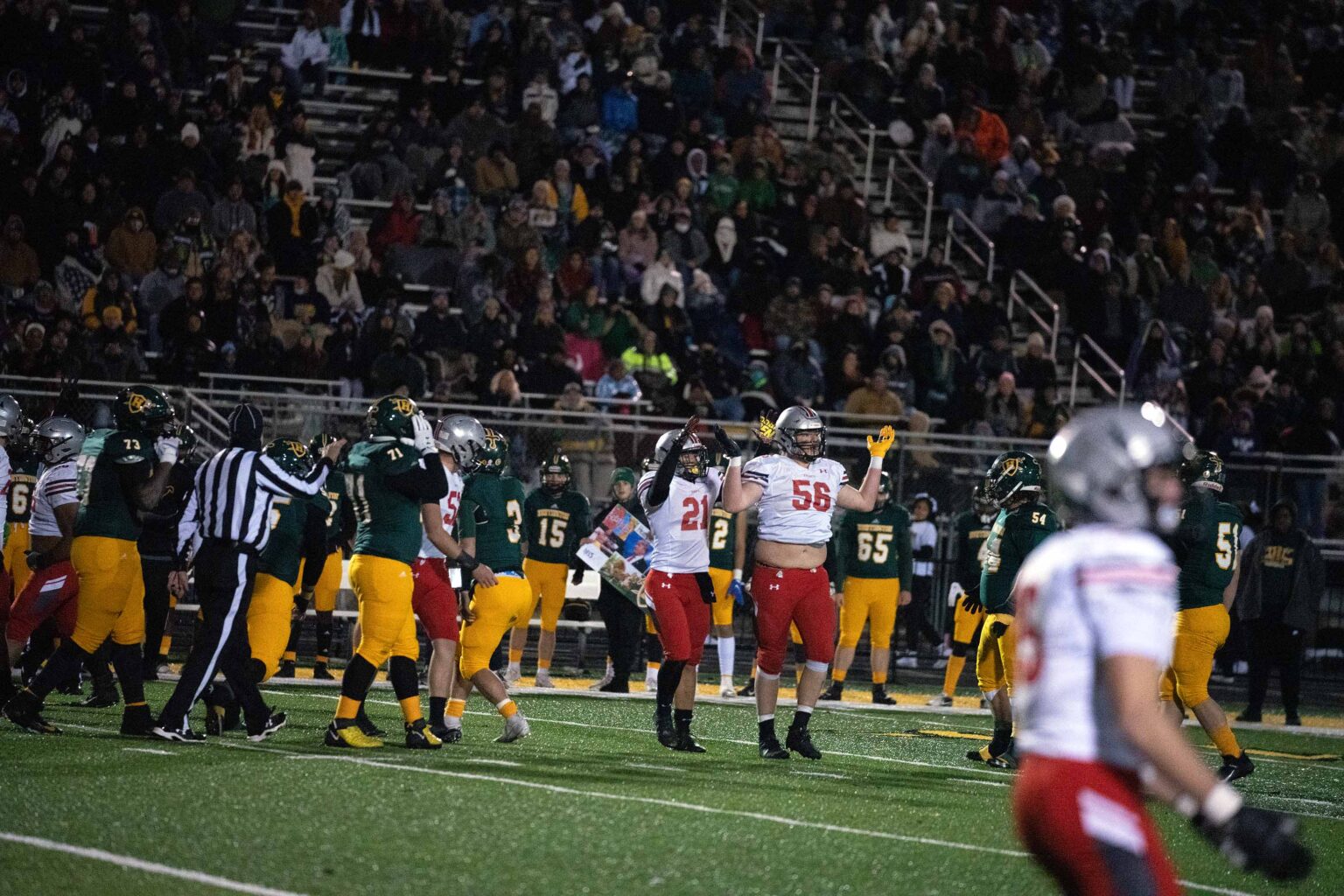 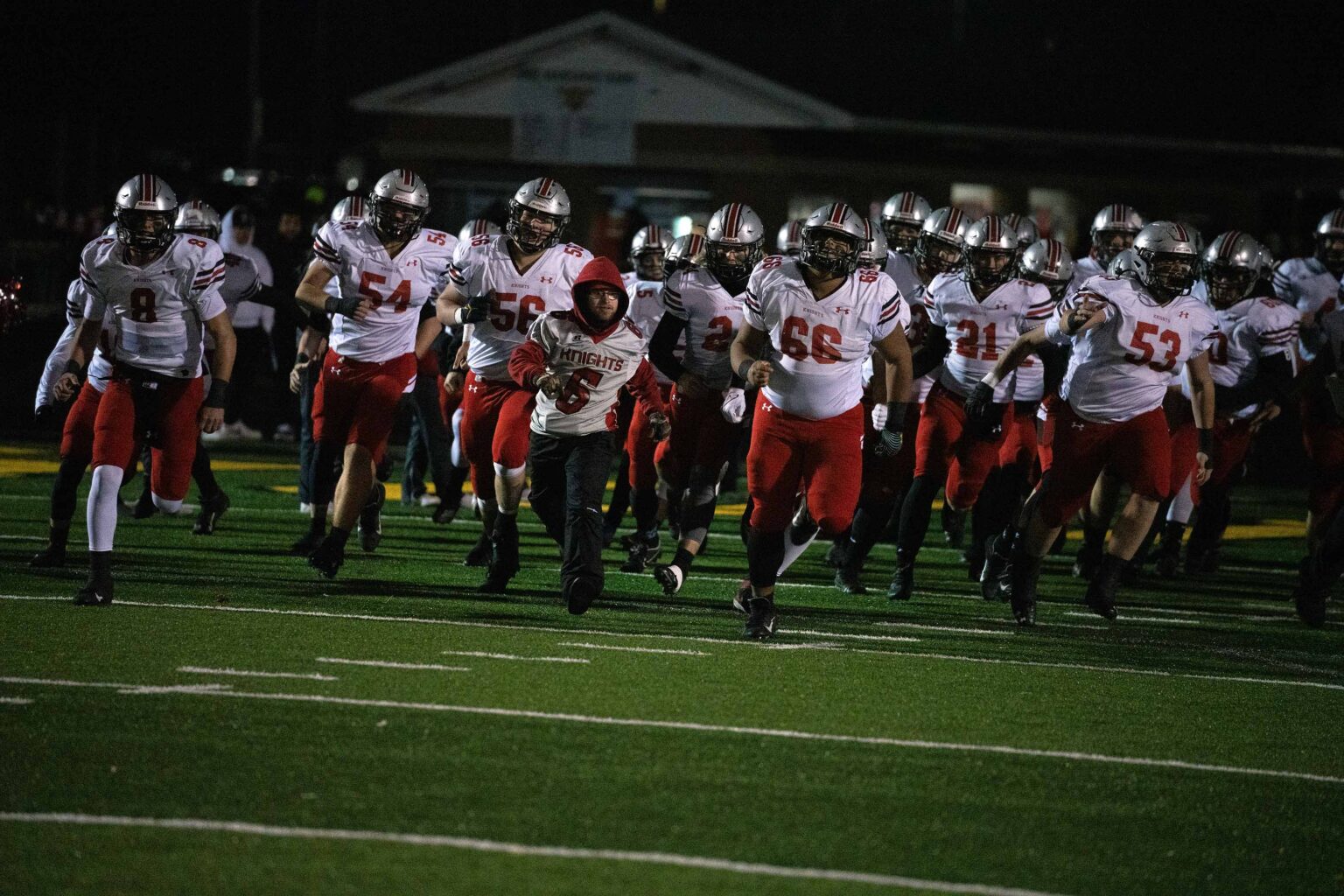 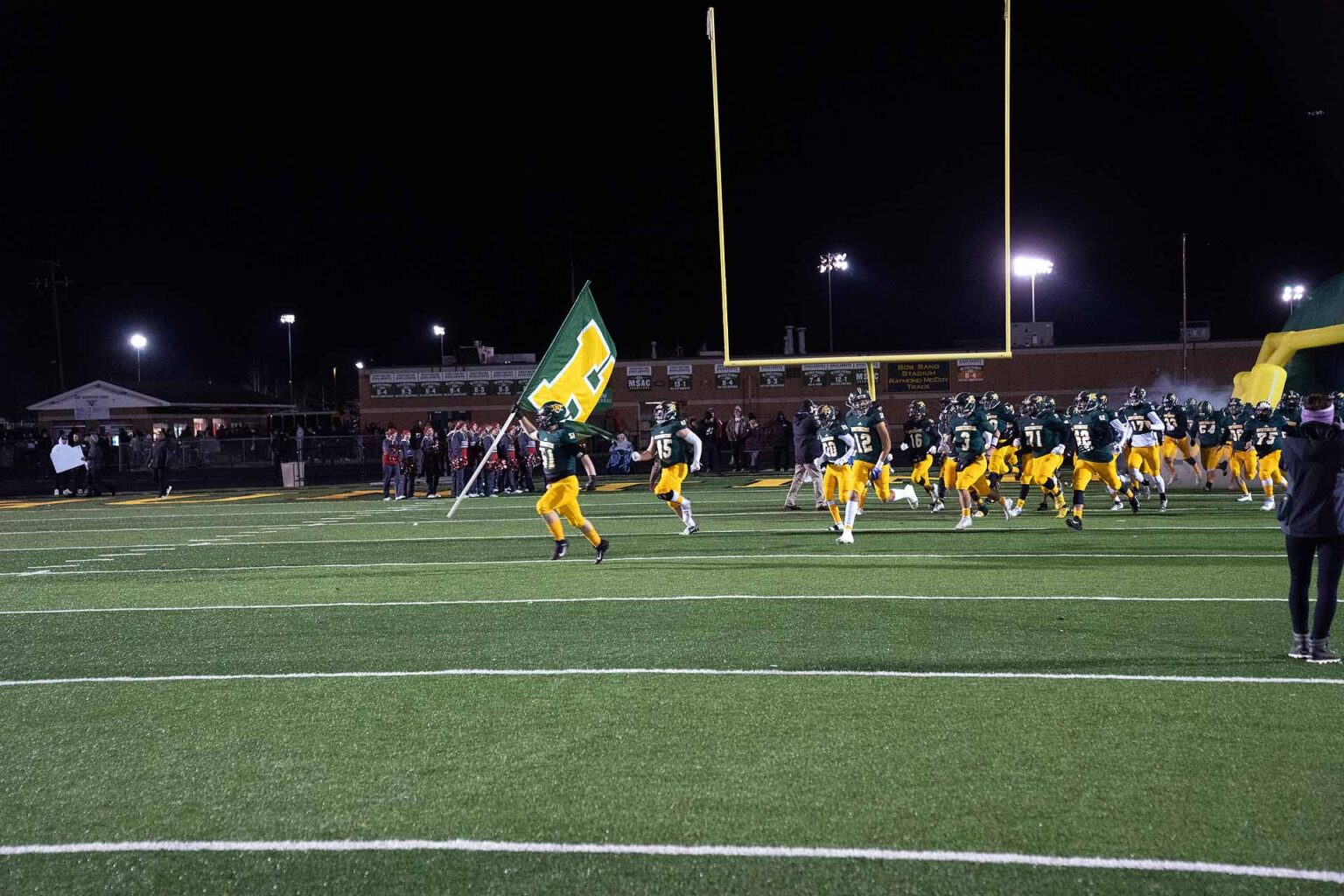 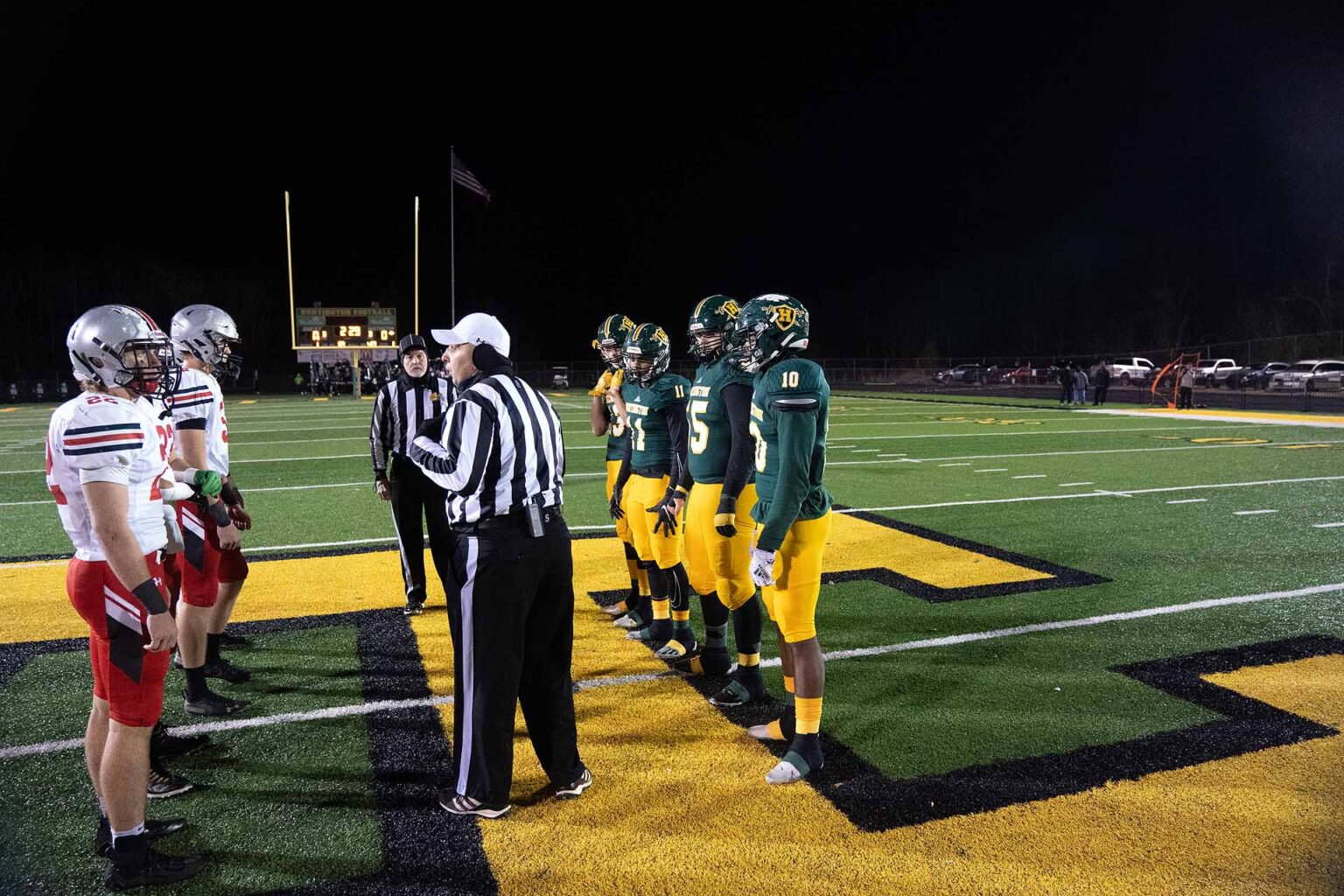 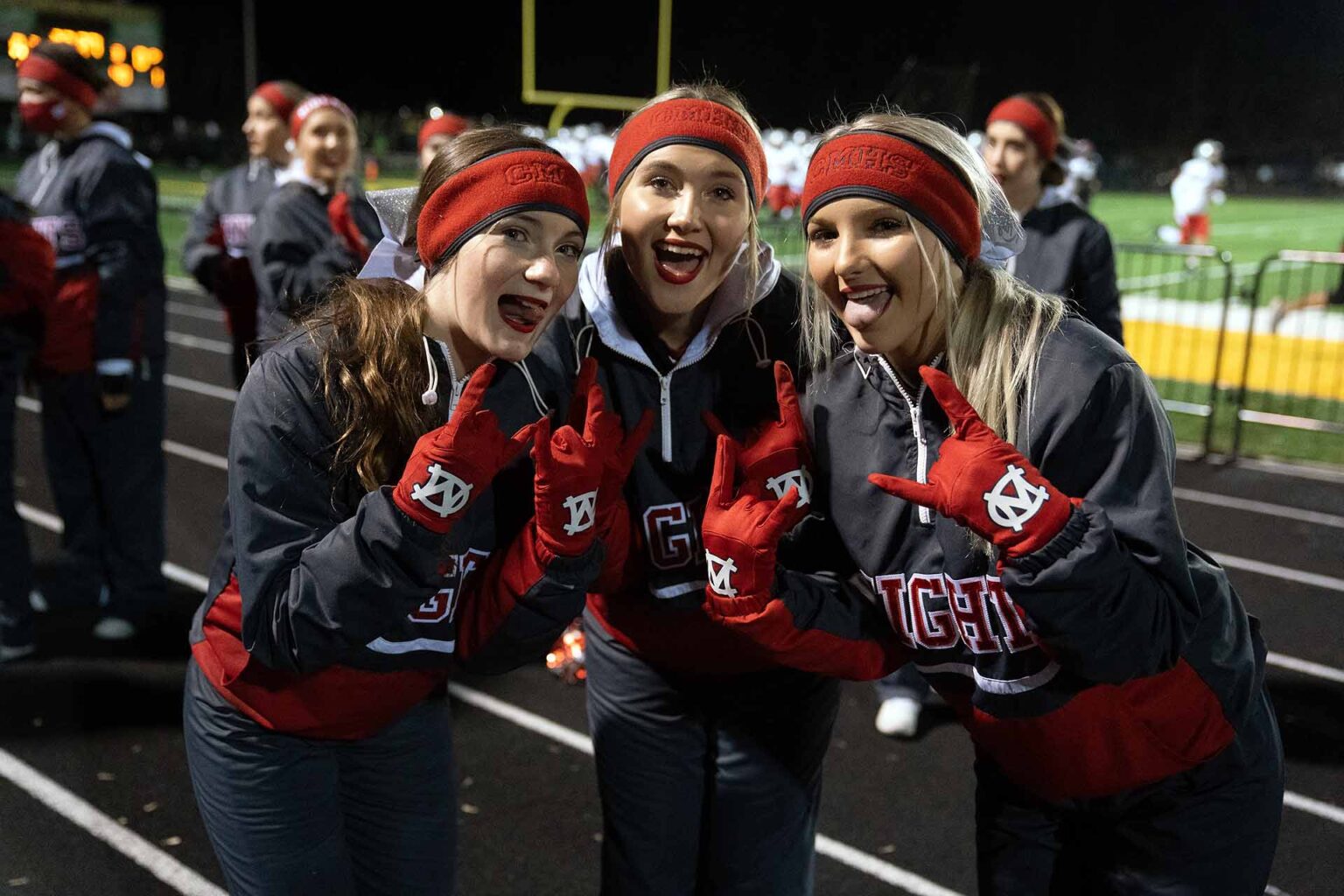 HUNTINGTON, W.Va. — Huntington entered Friday’s Class AAA semifinal against No. 5 Cabell Midland unbeaten and as the top seed, with a four-point regular-season victory over the Knights on its resume.

Despite that, the Highlanders still had the mentality of an underdog in their matchup with a nearby rival at Bob Sang Stadium.

“All we heard after the regular season game is that a lot of the reason we won was because of the referees,” veteran Huntington head coach Billy Seals said.

Seals’ team left no doubt in their second matchup of the season with the Knights, getting three rushing touchdowns and two passing scores from dynamic quarterback Gavin Lochow, while controlling the line of scrimmage in a resounding 37-15 victory.

“We get a lot of credit for our speed and athleticism, but maybe more needs said about how physical we are,” Seals said. “We did a lot of good things up front on both sides of the ball.”

The win allows Huntington (13-0) to make its second trip to the Super Six, where it will face No. 2 Martinsburg (12-1) in next Saturday’s AAA title game at Wheeling Island Stadium. The Highlanders missed out on the postseason after a 3-6 finish in 2020.

“In the offseason we were working our butts off and I could tell we were going to be a lot better,” Lochow said. “Everyone was putting in the time.”

Cabell Midland (11-2) got off to its desired start, forcing a turnover on downs and scoring on its second play from scrimmage — Jackson Fetty’s 51-yard run — to hold a 7-0 lead 2:23 into the action.

But the Highlanders, who held a significant special teams edge throughout, answered quickly after starting at midfield. Lochow’s 35-yard pass to Amari Felder moved Huntington into the red zone and Lochow reached the end zone three plays later on an 8-yard run, allowing his team to knot the game at 7.

CMHS responded with an 11-play drive, but had nothing to show for it when quarterback Ryan Wolfe was brought down for a 2-yard loss on fourth-and-6 from the Huntington 15.

Two plays later, HHS went on top for good when Lochow connected with speedster Noah Waynick for a 79-yard touchdown pass. Although the point-after kick was no good, the Highlanders led 13-7 with 2:03 left in the opening quarter.

“I felt like we played our worst game and didn’t execute and they played really well,” CMHS head coach Luke Salmons said. “A bad night to play bad. It just wasn’t a great game for us anywhere.”

Huntington’s defense, which has not allowed more than 21 points in a game this season, forced another turnover on downs on the Knights’ ensuing series, giving the Highlanders the ball back at their 30.

The Highlanders put together a 70-yard drive capped by Lochow’s 26-yard touchdown pass to freshman Zah Zah Jackson, leaving themselves with a 20-7 lead 6:22 before halftime.

“You can never have enough playmakers,” Seals said. “We have plenty of those.”

The Knights fumbled late in the opening half and Tyrees Smith’s recovery allowed Huntington to get the ball back on its 35 with 1:43 remaining.

Lochow connected with Waynick for 20 yards and Scout Arthur for 18 to set up a 34-yard field goal from Jonathan Aya-Ay that allowed Huntington to lead 23-7 at halftime.

But just as it did on its first series of the game, Cabell Midland put together a strong drive to start the second half, needing eight runs to cover 63 yards and scoring its second touchdown on Wolfe’s 19-yard scamper.

Wolfe then threw a 2-point pass to Chandler Schmidt, bringing the Knights to within 23-15 at the 8:29 mark of the third quarter.

A 15-yard penalty on the touchdown, combined with NaKyin Harrell’s kickoff return, allowed the Highlanders to start their first possession of the second half at the CM 45.

Four plays later, Huntington regained its two possession lead when Lochow broke outside for a 23-yard touchdown run to make it 30-15.

“I felt like we had some momentum, but we fumbled the ball around and did some uncharacteristic things,” Salmons said.

Wolfe’s incomplete pass on fourth-and-12 from just outside the Huntington 30 on the first play of the fourth quarter allowed the Highlanders to regain possession, and although they didn’t produce points, a 51-yard punt helped flip the field and put the Knights at their own 8 with 10 minutes remaining.

Three CMHS runs didn’t lead to anything, forcing the Knights to punt out of their end zone.

Starting on the Midland 27 with 7:31 remaining, Lochow covered that distance on the first play with his third TD run, giving Huntington a 37-15 lead.

The Knights had a chance to draw closer on what proved to be their final series, but Wolfe fumbled on the Huntington 1 and Jordan Price recovered to seal the verdict.

“A lot of veteran guys have played a lot of snaps for us,” Seals said. “I couldn’t be happier for our kids, coaching staff and the community of Huntington. We’ll enjoy this for 24 hours and sounds like we have to get to work on Martinsburg. Lucky us, huh?”

Lochow completed 10-of-17 passes for 226 yards, with Waynick hauling in four of the receptions for a game-high 116 receiving yards.

“We definitely felt like underdogs,” Lochow said. “The way all the state was viewing us and saying they don’t know how we beat them, all that really pushed us and motivated us this week.”