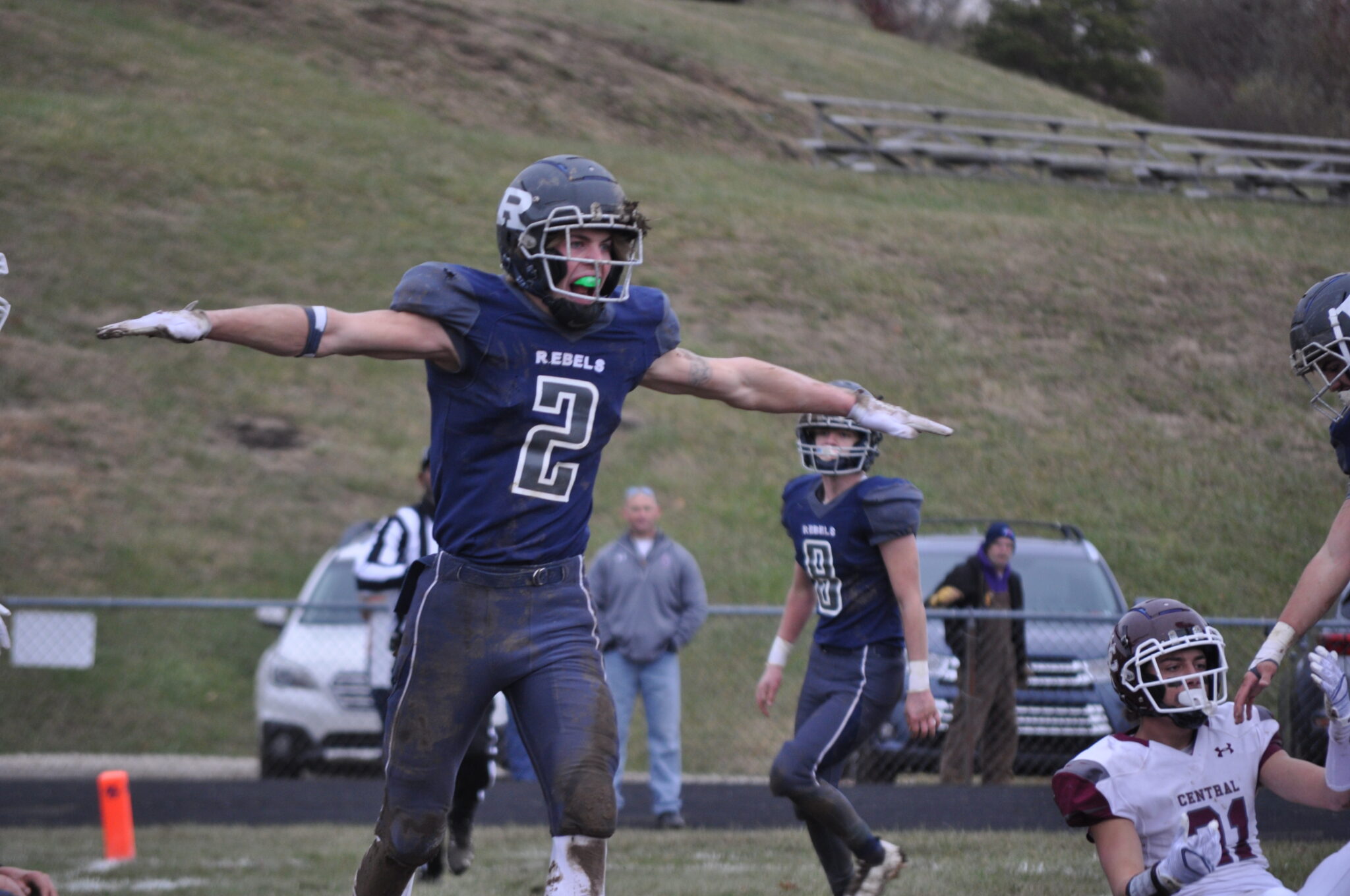 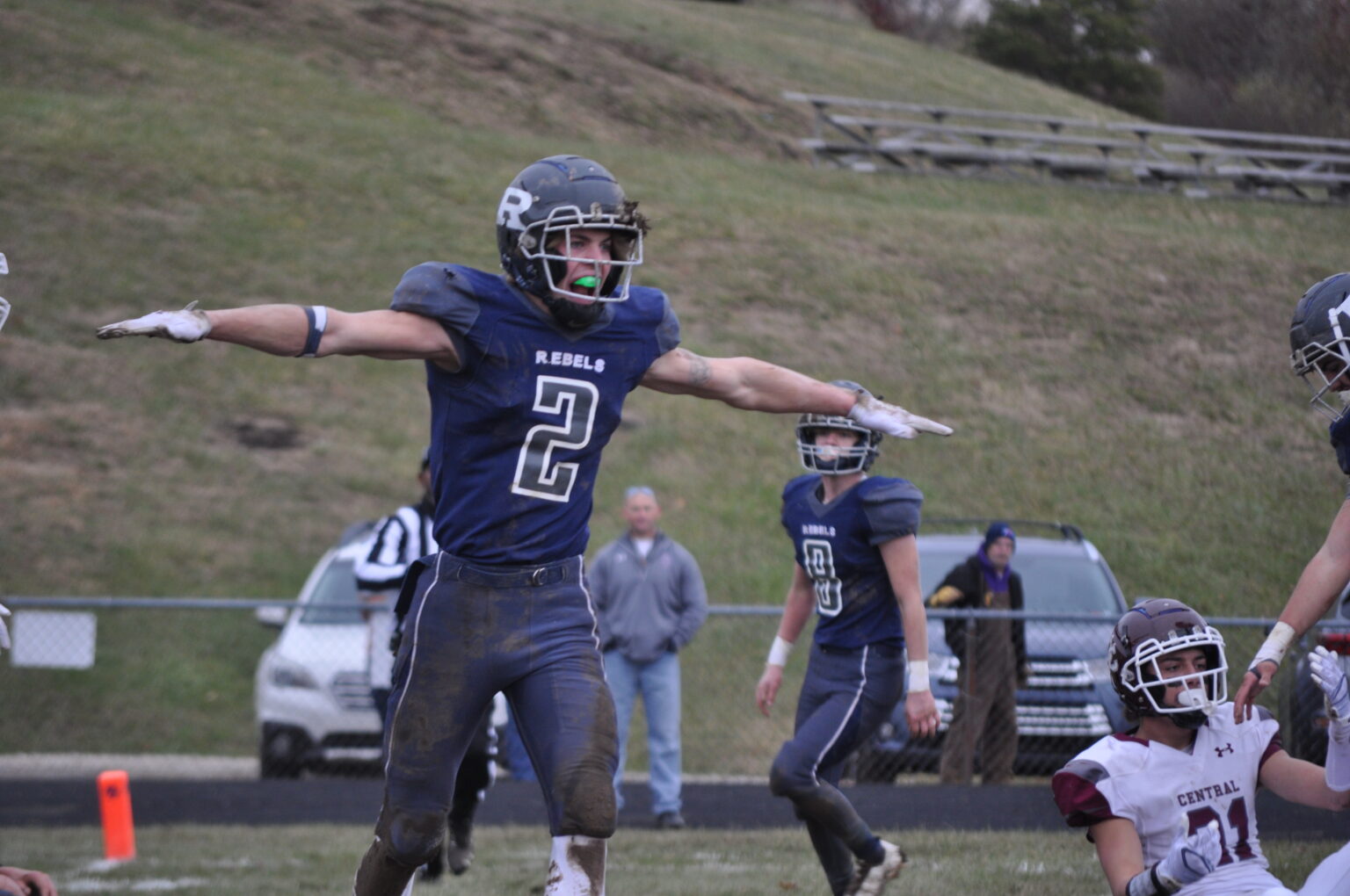 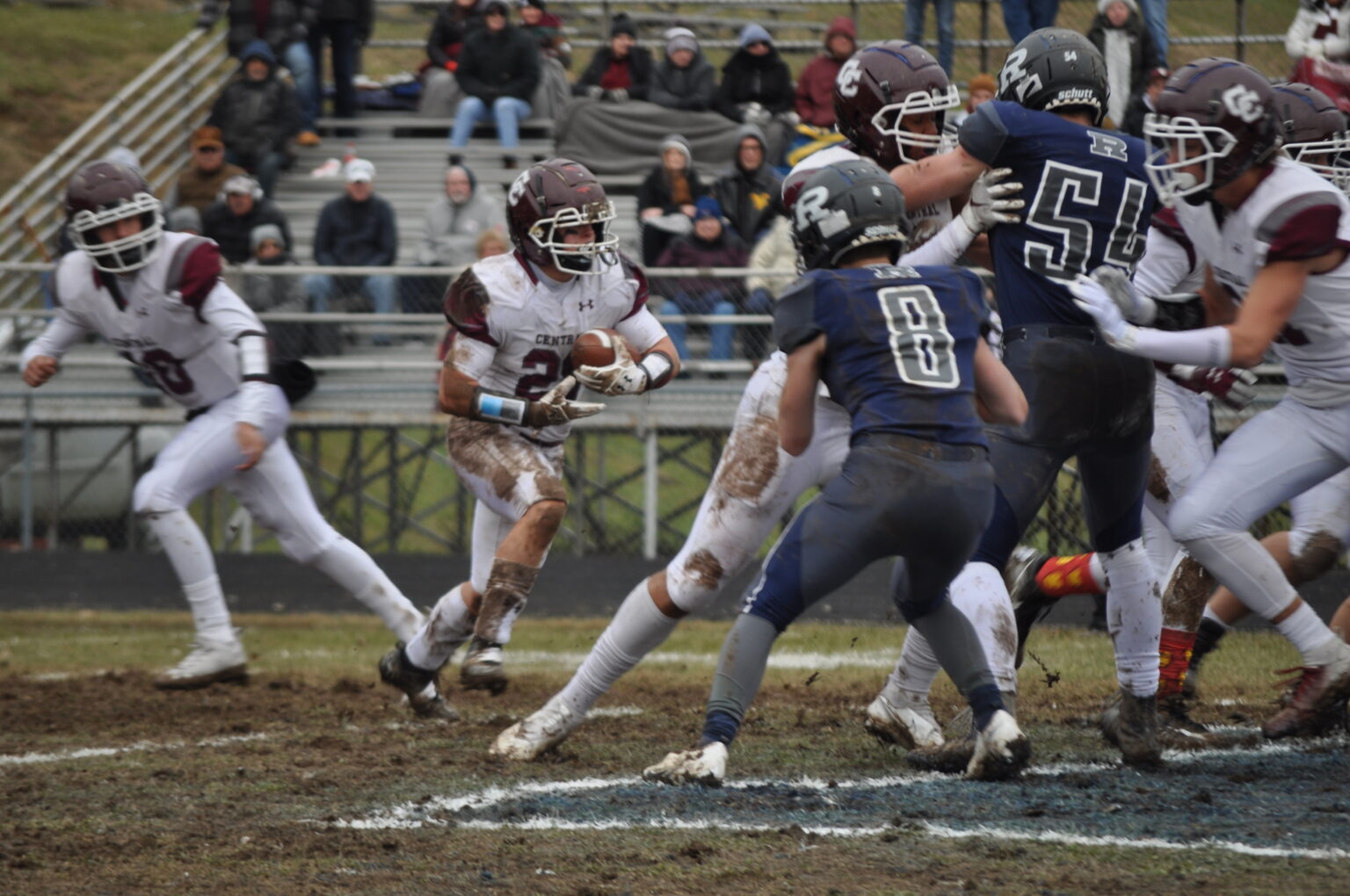 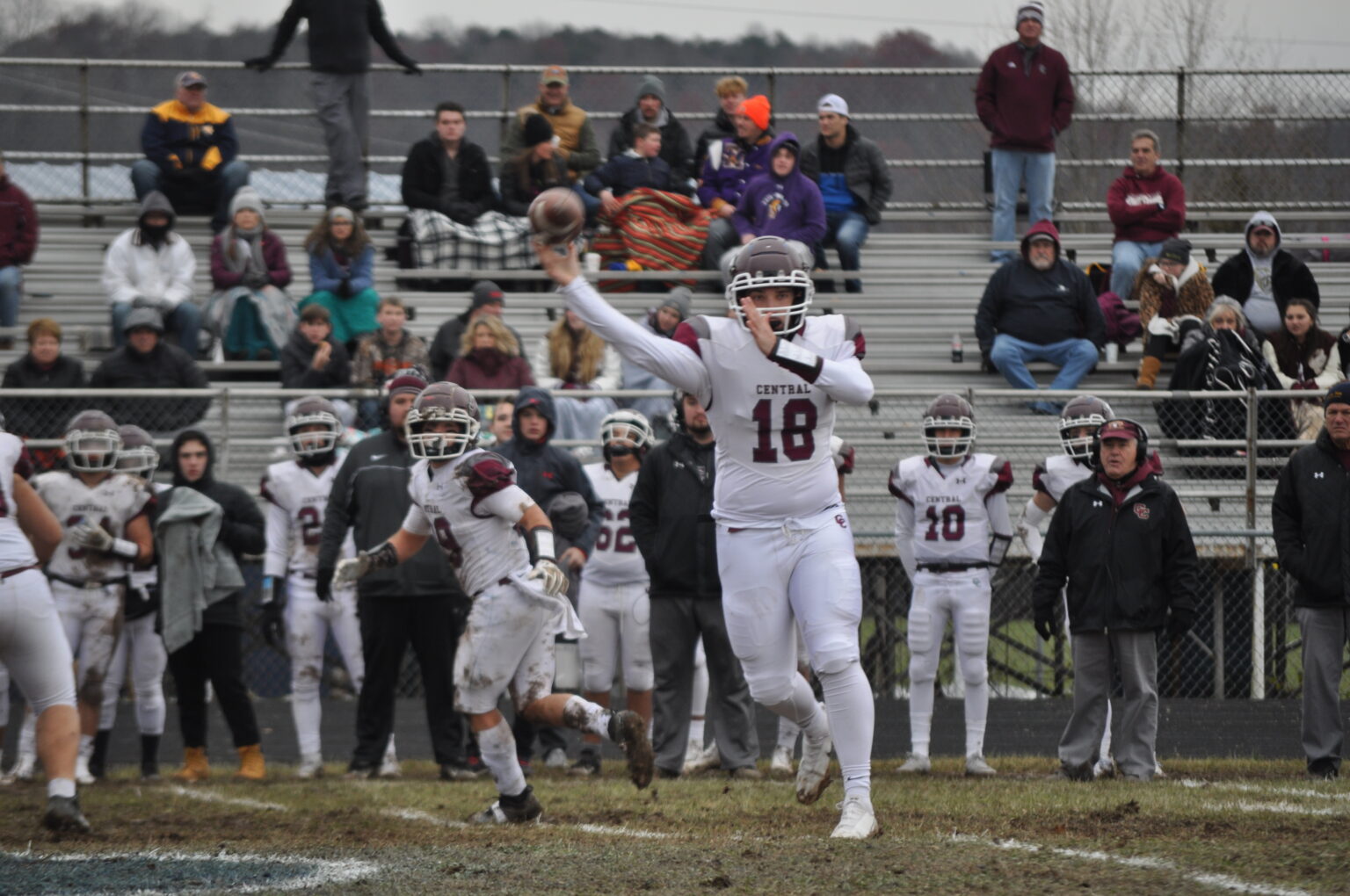 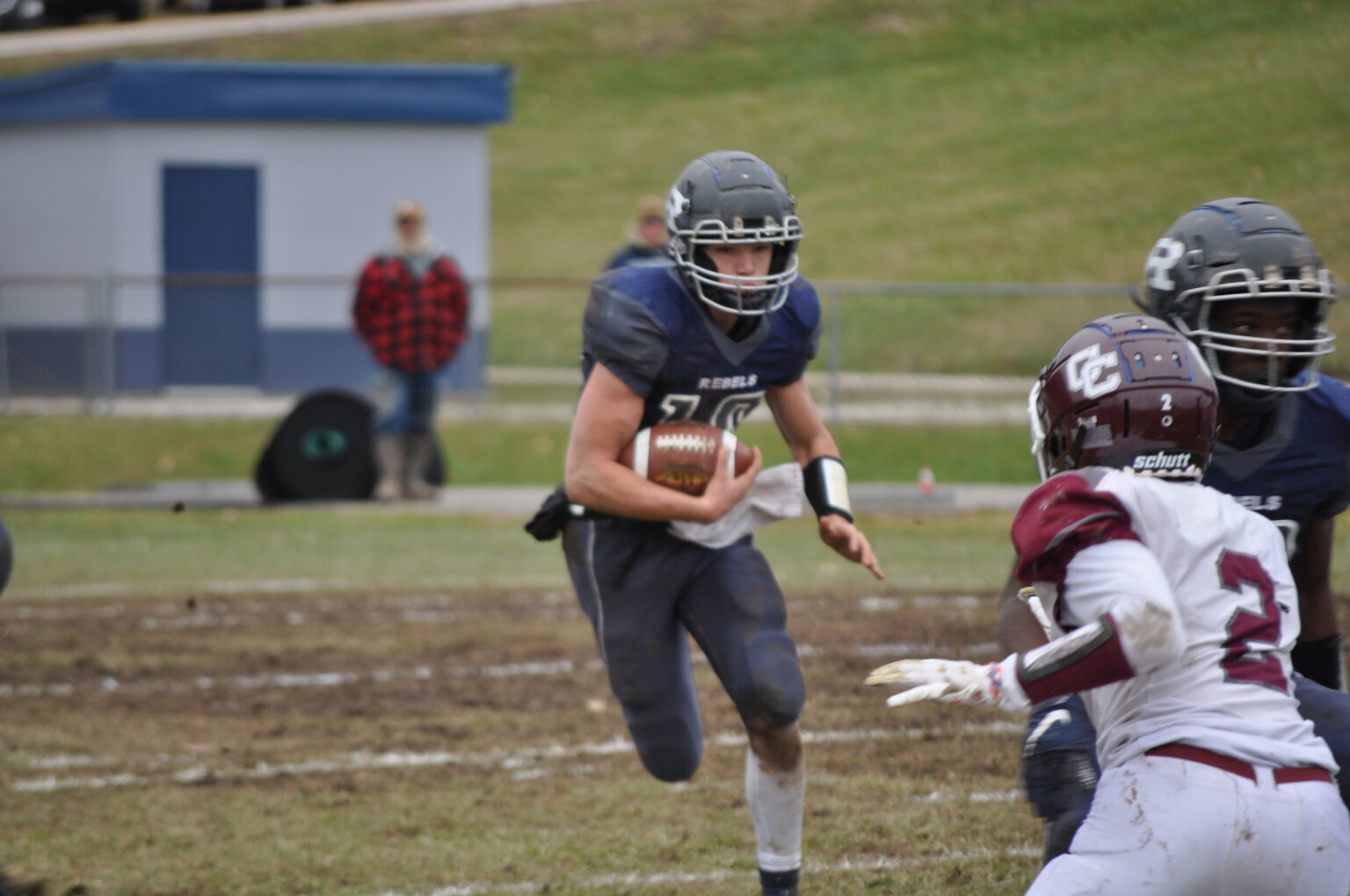 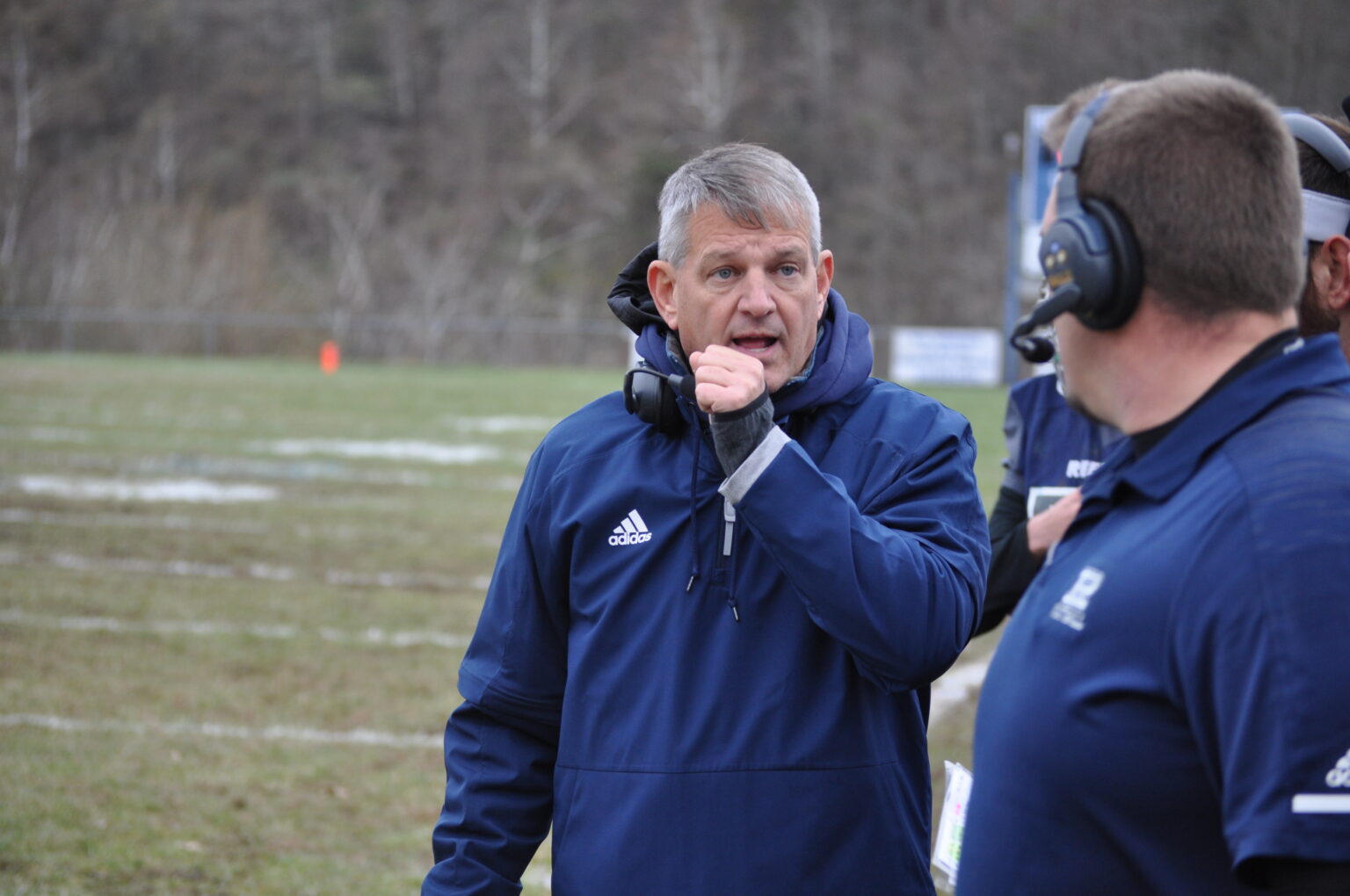 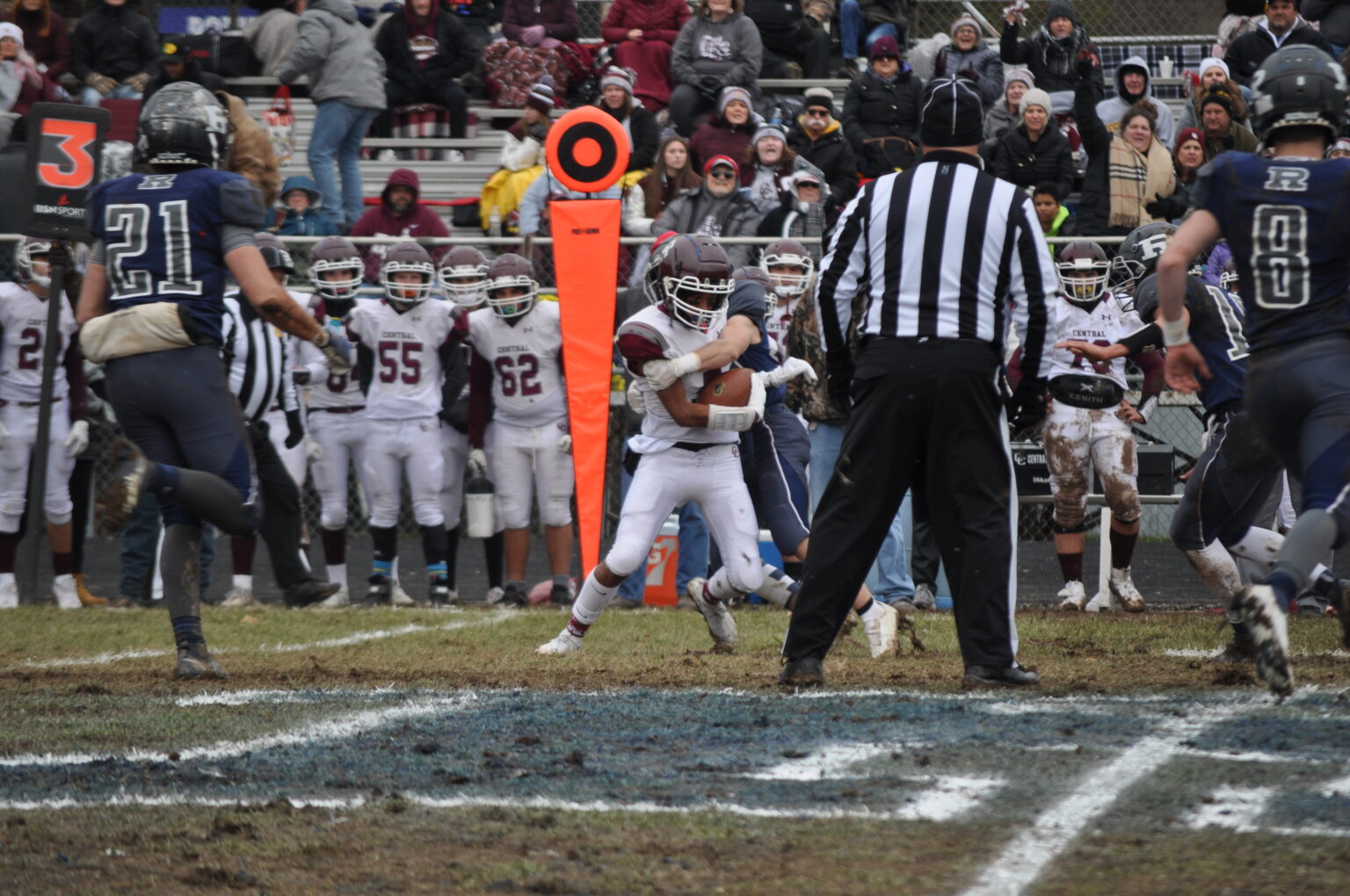 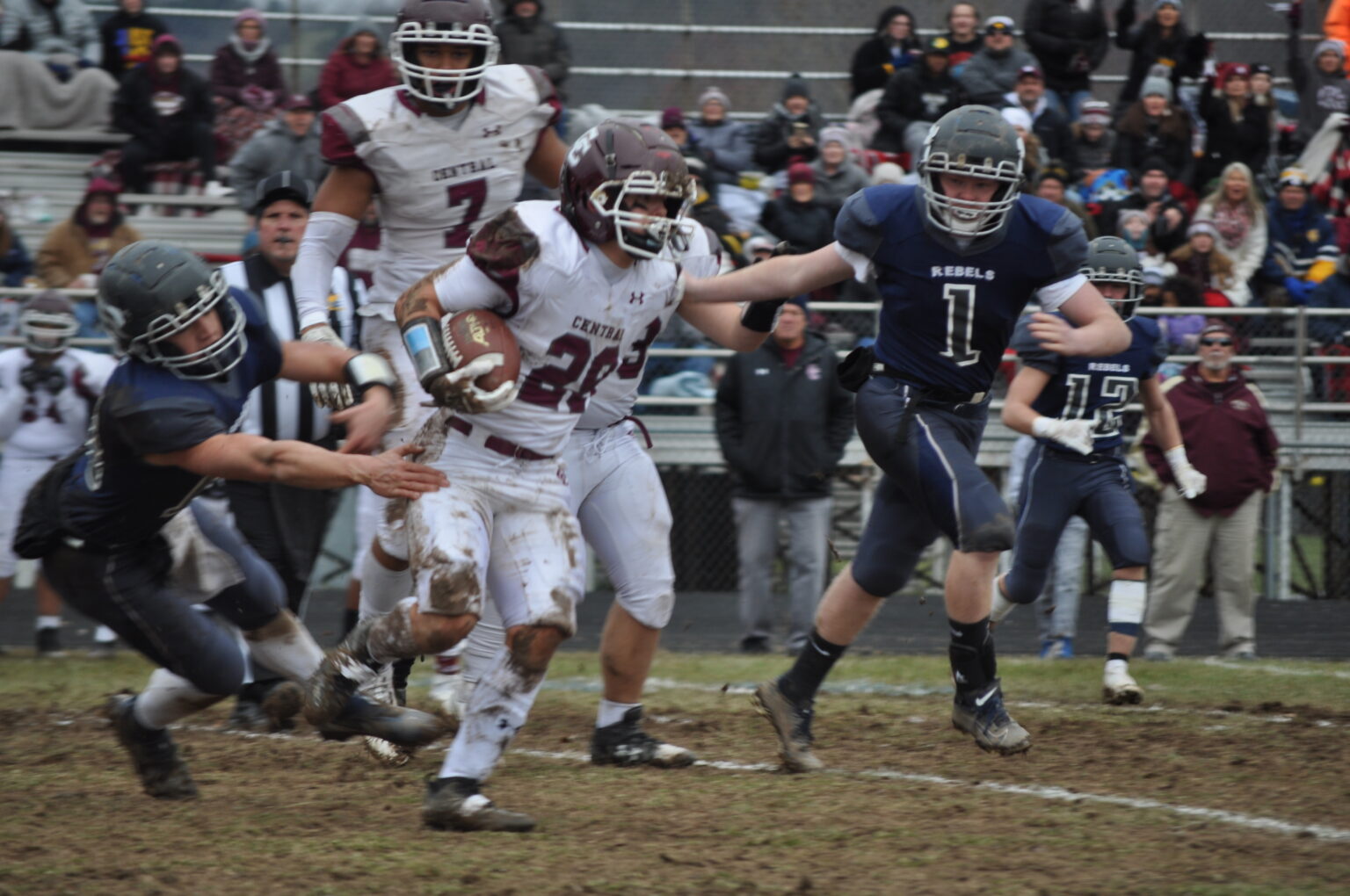 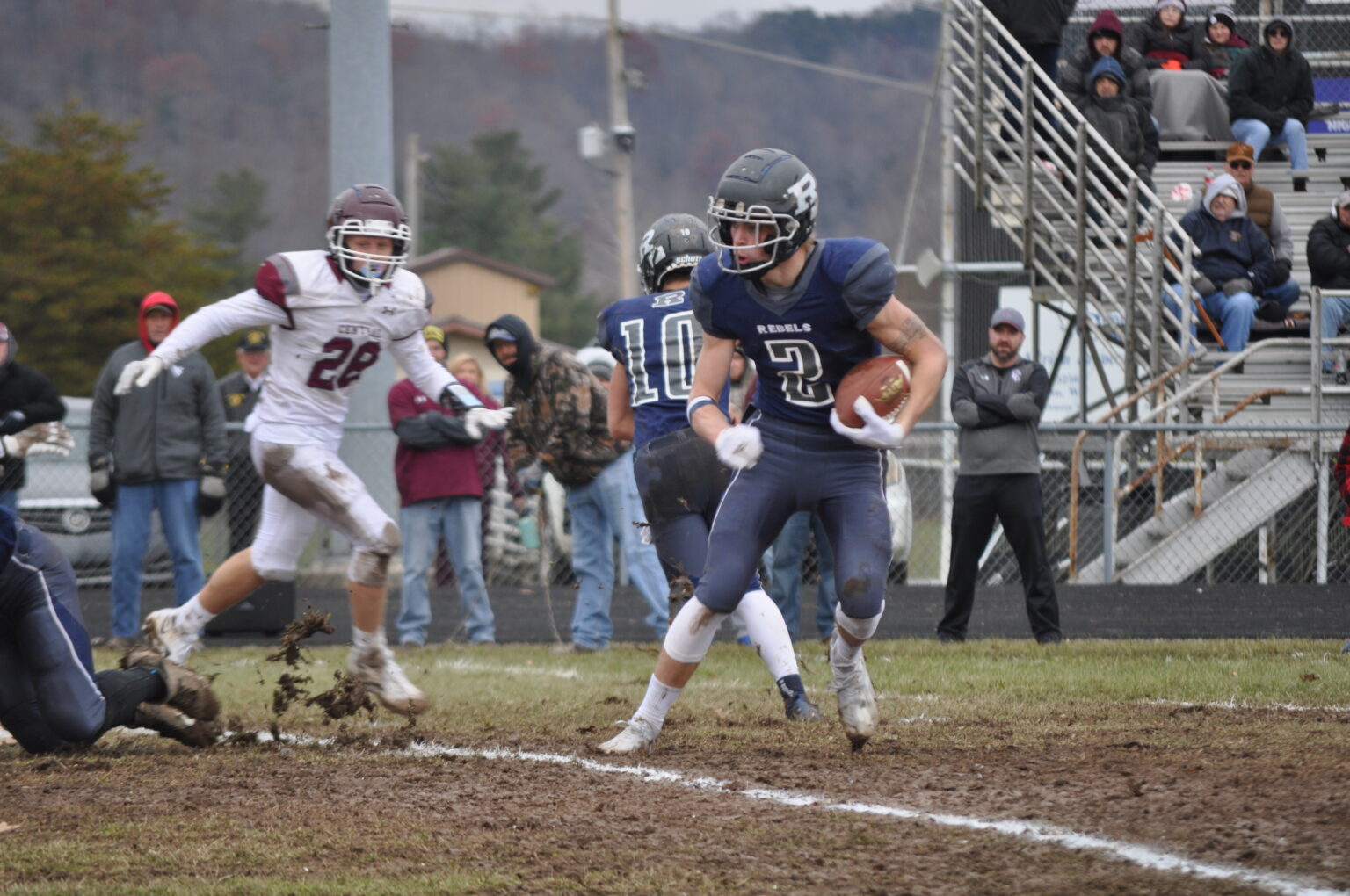 Ritchie County's Gus Morrison tries to get to the outside. Photo by Greg Carey/WVMetroNews.com 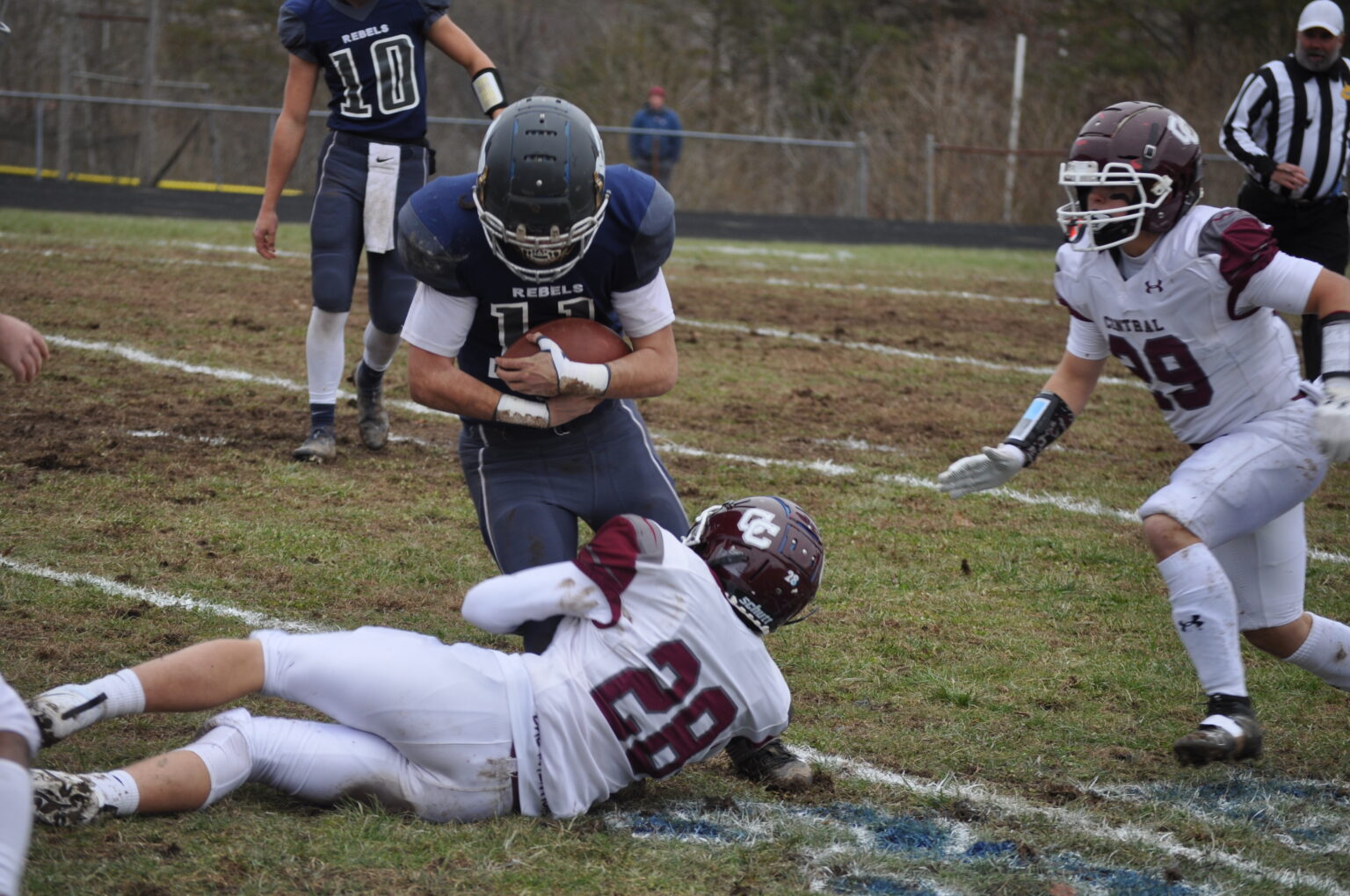 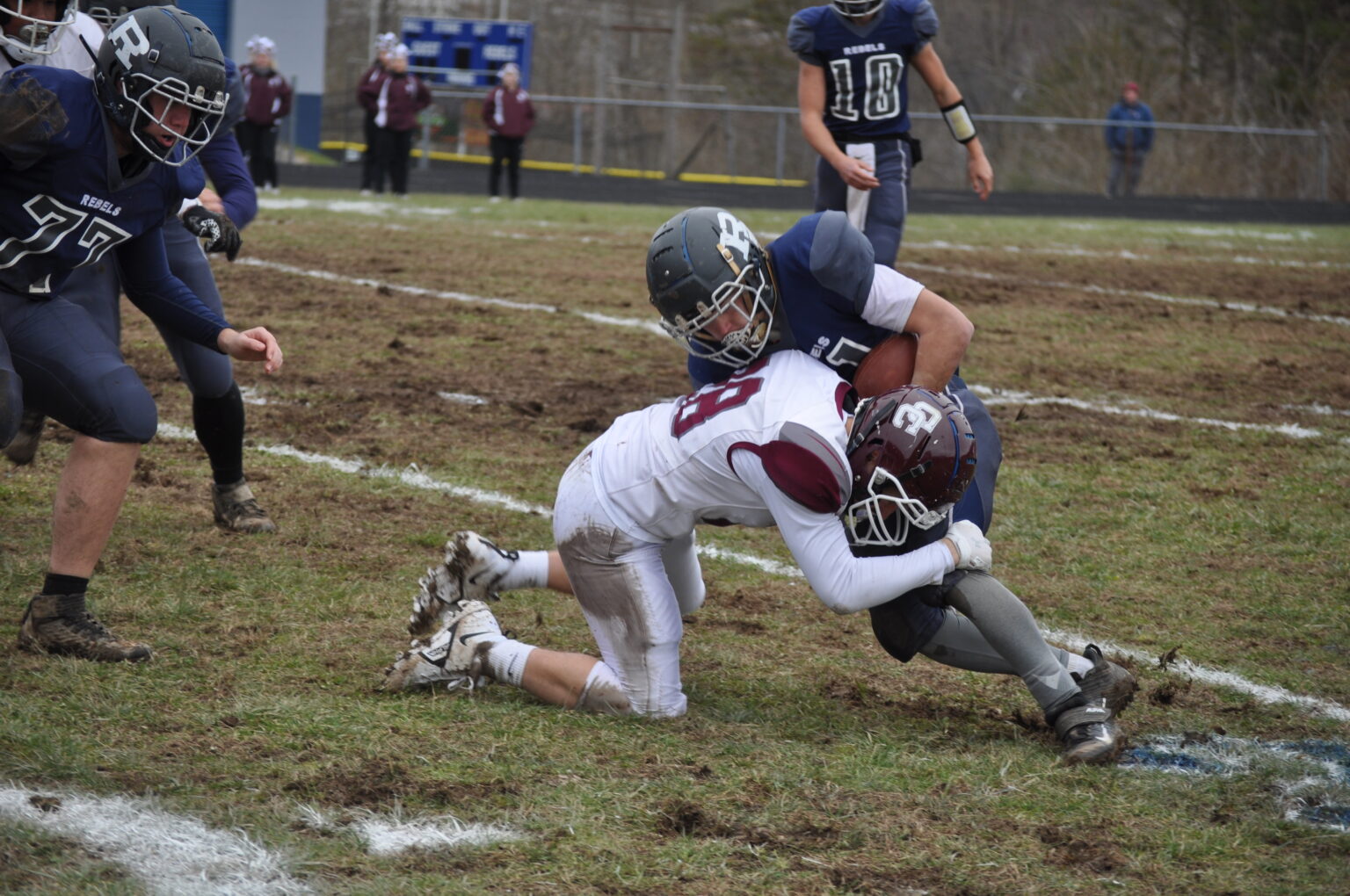 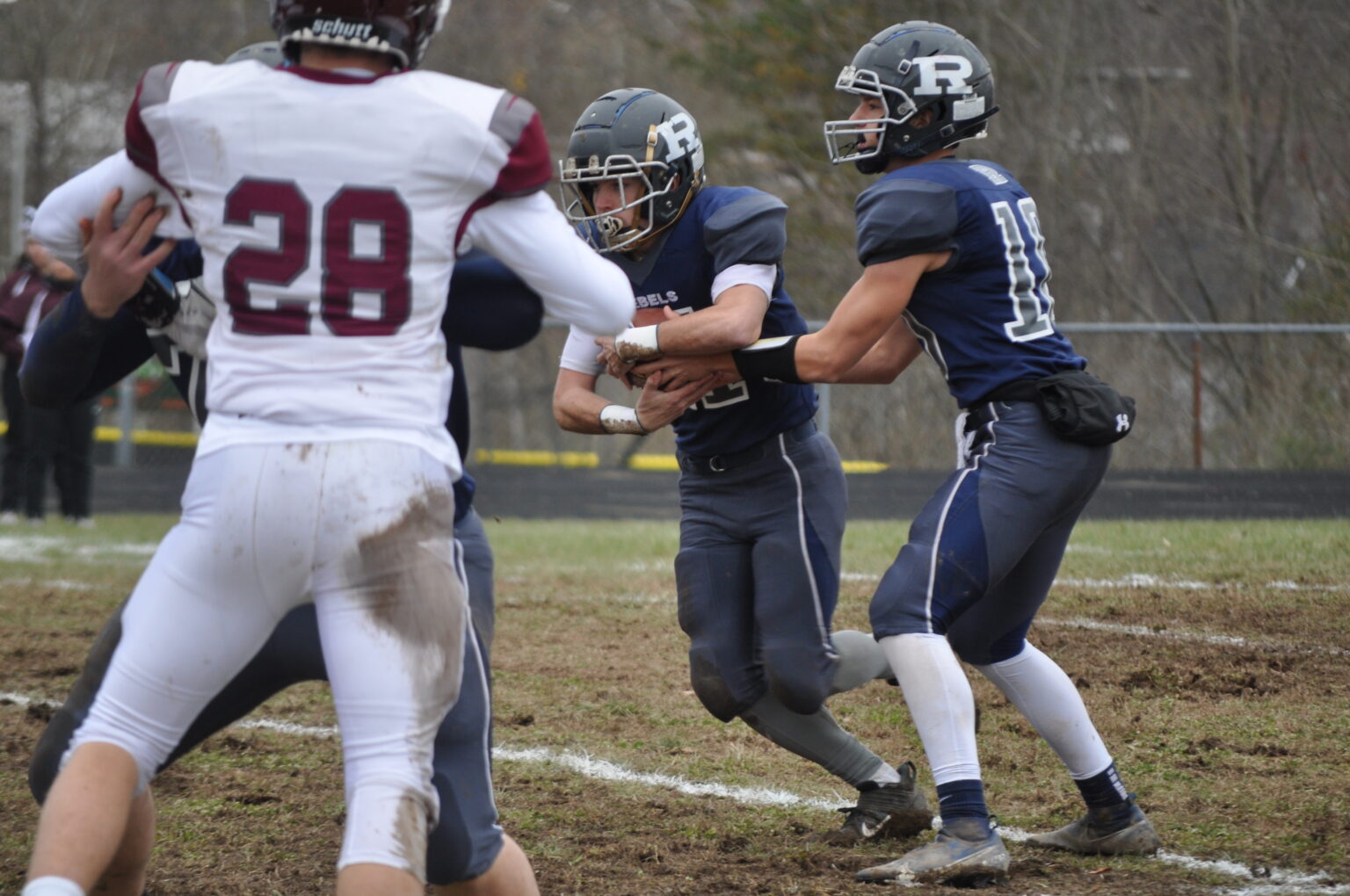 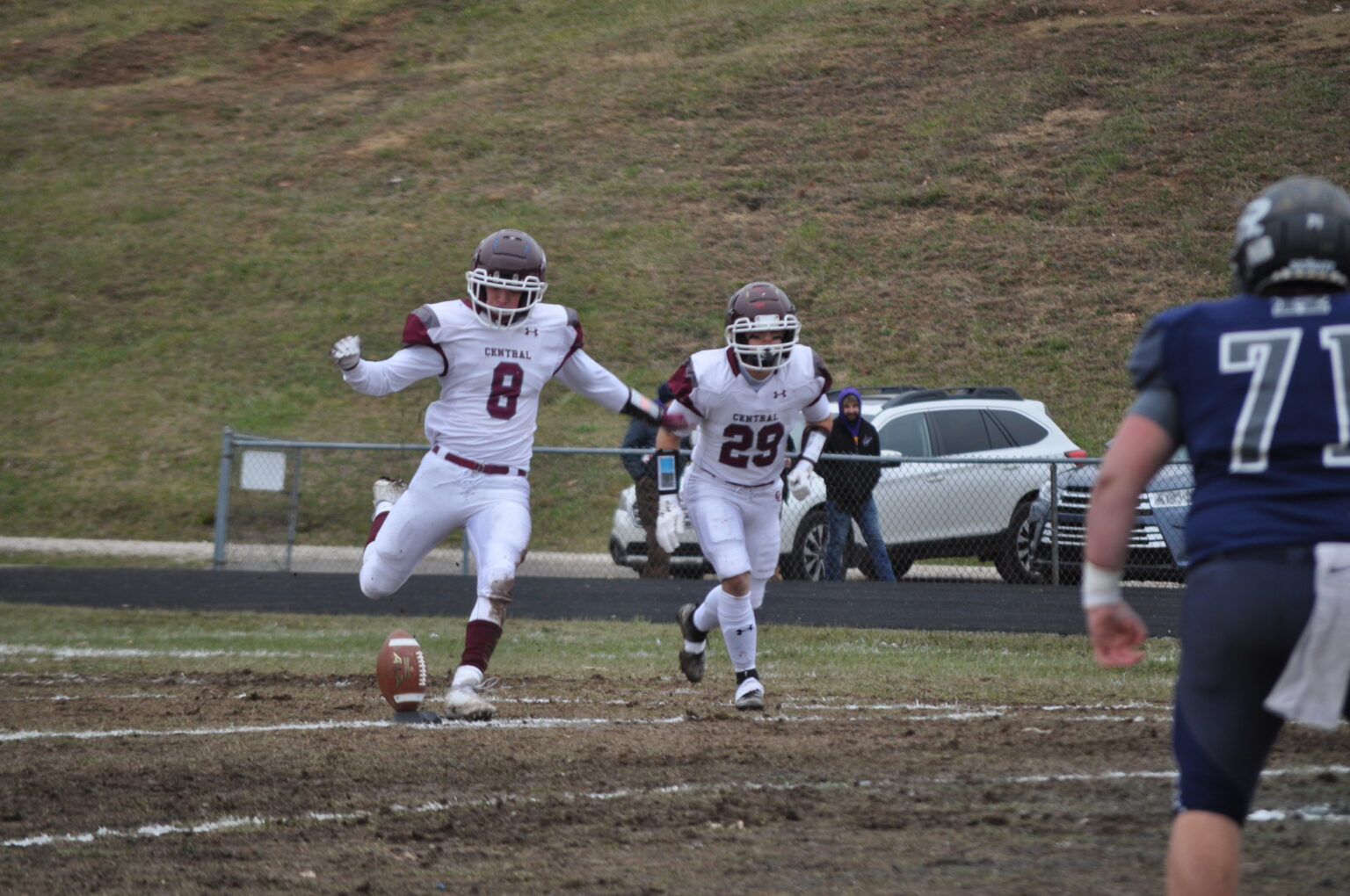 ELLENBORO, W.Va. — Rick Haught could hardly hide the emotion in the aftermatch of Ritchie County’s 20-16 victory over Wheeling Central in Saturday’s Class A semifinal.

Having taken over one of the more dormant football programs in the state prior to the 2018 season, Haught had helped lead the Rebels to several successful seasons that culminated with trips to the postseason.

Yet never before had Haught or the Rebels been part of a victory that could match the importance of what transpired on a muddy grass surface at Chuck Schofield Memorial Stadium.

“I’m trying not get emotional, but it’s every coach and every kid’s dream to get to Wheeling Island,” Haught said. “This was a tough week. Our kids have never practiced on Thanksgiving week. The weather was horrible and they came out here with great attitudes and then found a way to win today. It’s going to be a special week in this county.”

After the contest went to halftime scoreless, the No. 8 Maroon Knights (9-4) struck first on the opening series of the second half. A 55-yard scoring drive was capped by Michael Toepfer’s 26-yard touchdown pass to Lorenzo Ferrera on fourth-and-8. Cole O’Neil reached the end zone on a two-point run, allowing Central to lead 8-0 at the 8:38 mark of the third quarter.

“We didn’t get used to the field conditions until the second half really,” Central coach Mike Young said. “We made some adjustments to what we were trying to do.“

The Rebels (12-1) answered immediately in the form of Ethan Haught’s 56-yard TD pass to Marlon Moore, though the two-point try resulted in Haught being sacked, leaving the Maroon Knights with an 8-6 lead.

“I can’t remember the last time we didn’t win the second half,” Rick Haught said. “It happened again today. wW gave up the score right off the bat to go down, but we didn’t hang our heads. We got our kids to come back.”

On the ensuing series, Central elected to go for it on fourth-and-4 from the Rebels’ 39, but Payton Hildebrand’s pass fell incomplete, giving RCHS the ball back.

Two plays later, the Rebels had their first lead of the game when Haught threw a short pass to Gus Morrison, who reversed fields and displayed breakaway speed en route to a 60-yard touchdown.

The Rebels’ two-point play was again unsuccessful, leaving them with a 12-8 advantage with 3:06 to play in the third.

“That was a play we just put in on Thursday,” Morrison said of the score. “I caught the ball and looked upfield and there was nothing, so I cut back and I saw their corner slipped, and it was wide open to the house.”

An exchange of punts left Central starting at its own 8 with a four-point deficit and 7:07 remaining. While the Maroon Knights gained a first down on Riley Watkins’ 15-yard run, they couldn’t move the chains again and were left with fourth-and-6 at their 27.

Young elected for a fake punt, but Cody Martos’ pass was intercepted by Morrison, allowing RCHS to start at the Central 24 with 5:52 remaining.

Seth Hardy immediately followed with a 24-yard TD run, and after a third failed two-point play, the Rebels led 18-8.

But the Maroon Knights didn’t go away quietly, and answered with a four-play scoring drive that Ferrera capped with his 35-yard touchdown run. Hildebrand connected with Jayvon Miller on the two-point pass, cutting Ritchie’s lead to 18-16 with 4:38 left.

“They’re such an explosive team and you saw what they did to us to close it within score,” Rick Haught said. “We go with a two safety look thinking they have to throw it and they just run it. They score real quick and that did not make my life any easier.”

Haught gained 2 yards on a fourth-and-2 run allowing Ritchie to pick up a critical first down that forced Central to use both of its remaining timeouts down the stretch. While the Maroon Knights held from there, Morrison’s punt again pinned Central, forcing them to start at its own 3 with 40 seconds to play.

“In these type of games, you don’t want to give a good offense the ball, especially with the field conditions,” Rick Haught said. “You have to take the risk of moving the chains and we talked before the game about the key was moving the chains, and we moved them just enough to get the win.”

Hildebrand was sacked by Garrett Cunningham for a safety with 10 seconds to play, allowing the Rebels to seal the win and secure their first trip to the Super Six.

The setback ended a 14-game playoff win streak for the Maroon Knights.

“It was very challenging. When you can’t even line up to kick an extra point because of field conditions, that doesn’t sit well when you’re used to playing on turf,” Young said. “We went out and practiced on grass, but we didn’t practice on mud and that’s what that field was in a lot of positions — a lot of overwhelming mud and dirt and sliding and slipping.

“It just wasn’t healthy, but it is what it is and they scored more points than we did, and we’re going to move forward.”

The Rebels began the game with a 15 play drive, but stalled in the red zone after consecutive sacks.

Central’s best opportunity to score in the opening half came on its final series, but Hildebrand’s pass to O’Neil on fourth-and-6 covered only 5 yards, resulting in a turnover on downs at the Rebels’ 7.

“I’ve been telling my kids all week this field is our advantage,” Rick Haught said. “We’ve played and practiced on it and I thought that would even up some of the advantages they had. Our defense played really well. I can’t say enough about these kids and the heart they have more so than the talent they have.”

Ritchie County will clash with No. 6 Williamstown in Saturday’s Class A final at Wheeling Island Stadium.