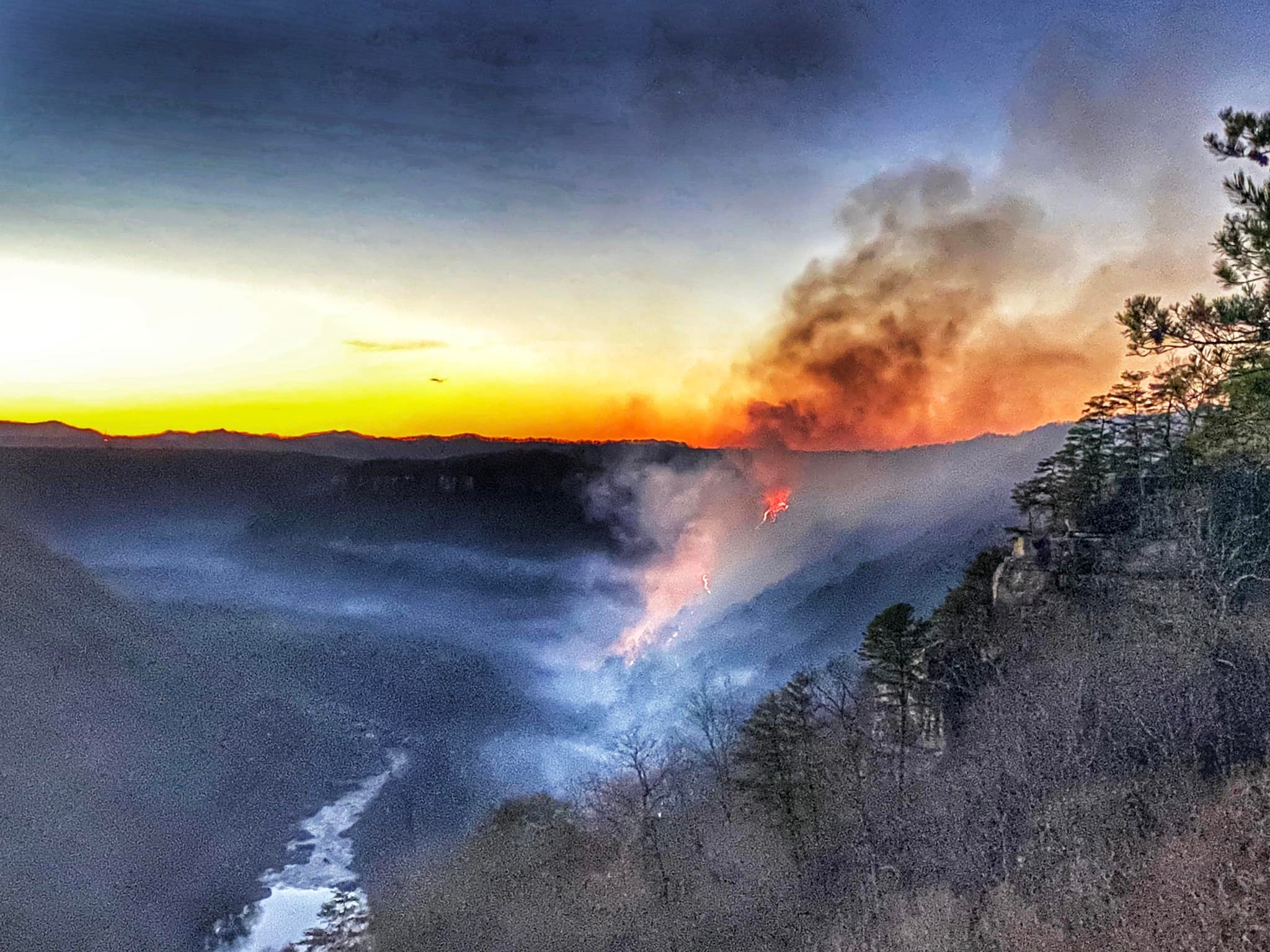 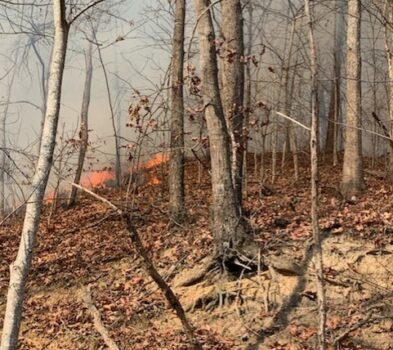 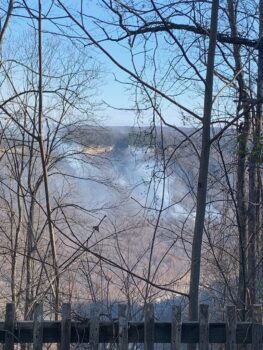 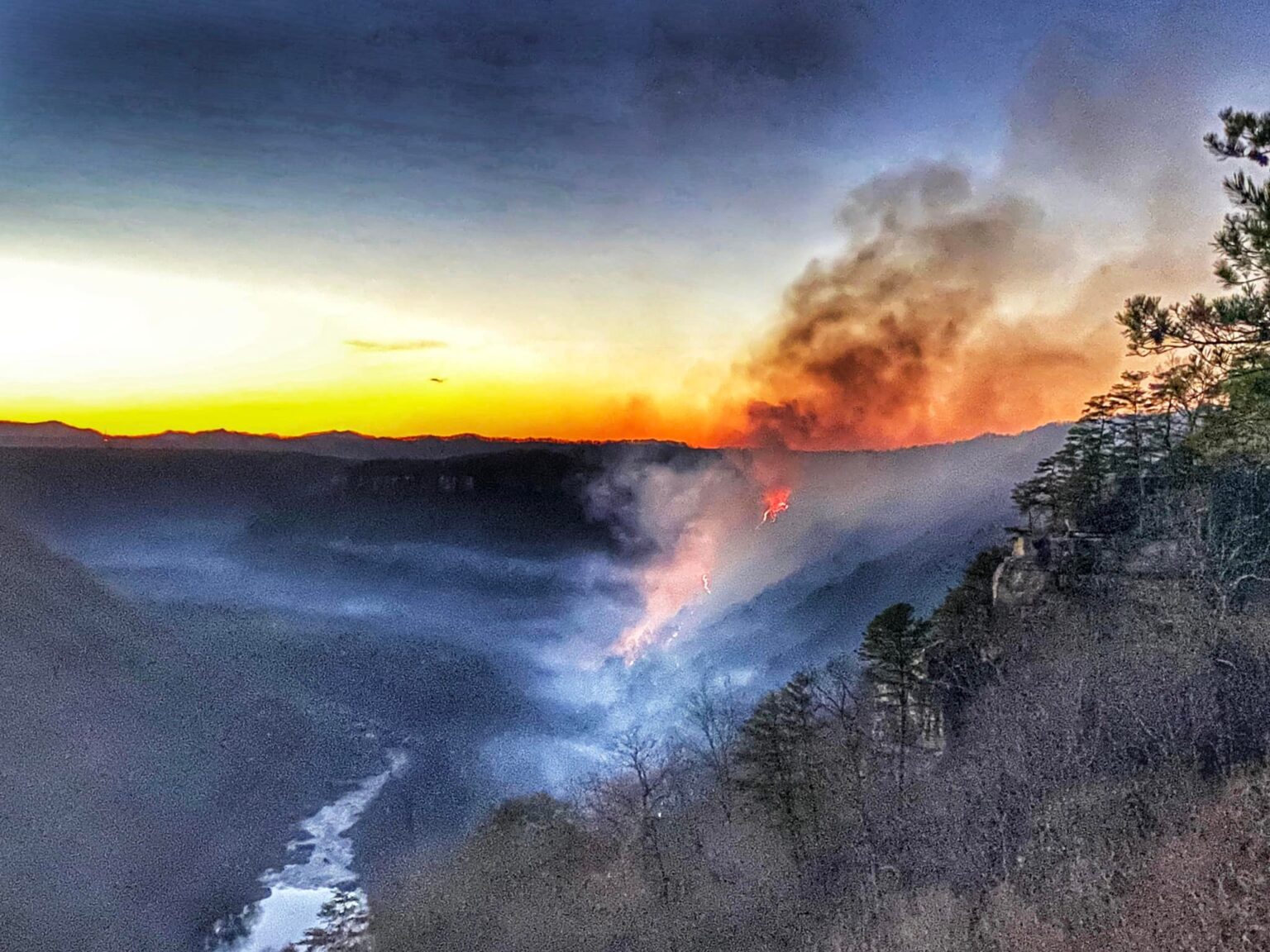 Fire crews worked in difficult conditions to contain the fire in the New River Gorge which has now extended to 100 acres and is about 50 percent contained. PHOTO: Ellie Groves 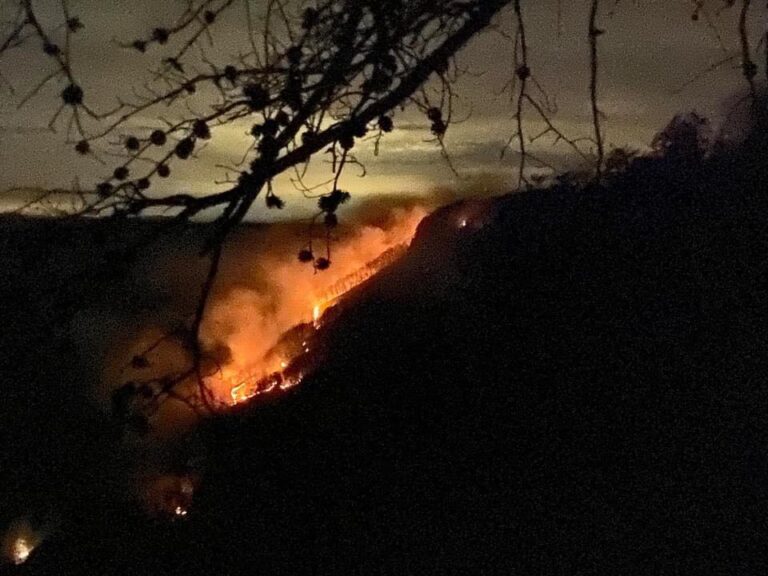 Flames are visible at night, but the fire has mostly burned low and slow and actually worked to benefit the forest to this point. PHOTO: Ellie Groves UPDATE:  National Park Service officials say the fire as of Tuesday evening had burned about 100 acres and was about 50 percent contained.

Crews continued to work to build a fire line to stop the fire from climbing up the Gorge toward the rim in steep and rugged terrain.  Rainfall is in the forecast today and officials are hoping it will be enough to bring the fire under control and get it out.

“It’s hard to access, there’s not much in the way of trails down there. The steep terrain makes if difficult with treacherous footing and things rolling downhill, like burning logs. It creates a dangerous situation for fire fighters,” said Dave Bieri, District Supervisor for the National Park Service.

The fire has consumed about 80 acres so far in an area called Beauty Mountain. It was first noticed Monday morning and fire crews managed to reach the area Monday afternoon. However, the conditions have made it difficult to put out.

“This is kind of the season for it. We’re seeing sunny weather, with dry conditions and a little bit of a breeze which is not what you want when you’re fighting a fire,” Bieri said.

According to Bieri, crews hoped for some rain to help out on Wednesday. Until then they’re trying to build a fire line halfway up the Gorge to halt the advance.

“Down below you have a natural fire line with the railroad and the river. It hasn’t gotten up to the top of the Gorge. It’s in an area where there are no structures threatened or anything like that. We’ll try to contain it with a fire line,” he said.

Crews from the Cuyahoga National Park, the Shenandoah National Park, and the U.S. Forest Service along with state fire fighting crews are working the fire. There’s no word at this point what may have sparked the fire.

As a result of the fire, the National Park Service has closed access to some of the popular hiking trails in the park and preserve including Nuttallburg, Keeney’s Creek Rail Trail, and the Headhouse Trail. The Endless Wall Trail and both parking lots are also closed due to the fire along with the popular climbing areas from Short Creek to the Cirque.