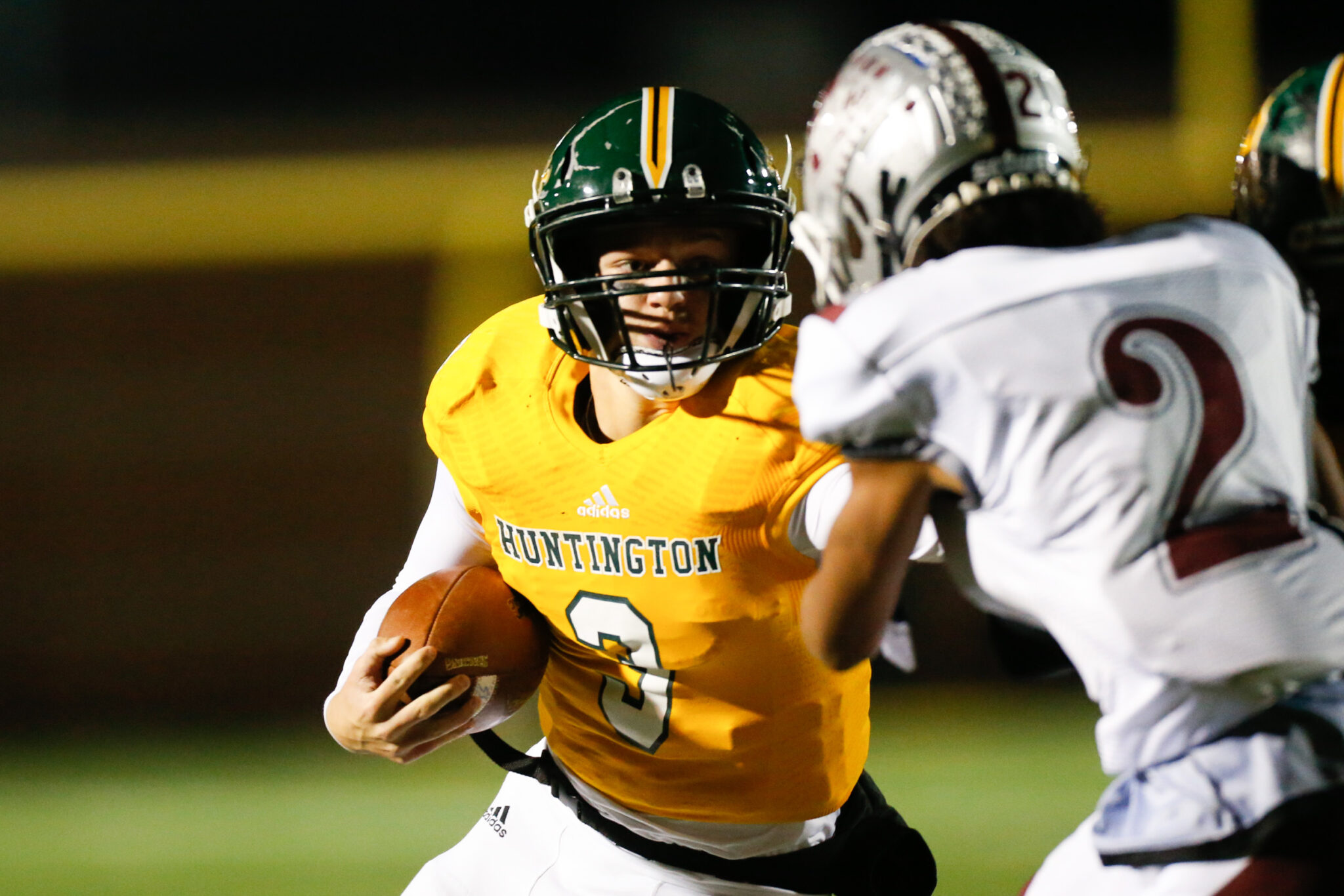 MORGANTOWN, W.Va. — Much has changed within the Huntington football program over the last year.

Following a 3-6 campaign in 2020, the Highlanders have rebounded to win all 13 of their games. Including its three postseason wins, the top seed in Class AAA has nine victories over playoff teams.

“Last year, we weren’t like a family,” junior quarterback Gavin Lochow said. “We were more selfish last year and realized if we want to be better, the whole team has to be unselfish and love each other. I feel like we’ve done a great job of that this year.”

Echoing what HHS head coach Billy Seals has said throughout the unbeaten season, Lochow believes the Highlanders have taken a mature approach week-to-week, focusing strictly on the task in front of them in favor of the bigger picture.

“Every week, we wanted to be 1-0,” Lochow said. “Being 1-0 every week is really what motivated us and obviously this was the ultimate goal.

“We hear it all day every day and really what it is, you can’t overlook an opponent or be happy about what you did the week before because the game that week is the only game that matters.”

The Highlanders seek their first state championship at noon Saturday against No. 2 Martinsburg, which claimed a 9-7 win over the Highlanders in the 2013 title game — Huntington’s most recent Super Six appearance.

Only twice in the last 11 seasons has Martinsburg’s season ended with a loss.

The Bulldogs have won eight AAA championships since 2010, while they were eliminated based on the color-coded covid map last season, preventing them from having a chance at a fifth straight title.

To qualify for the Super Six this year, the Bulldogs navigated through a challenging regular season schedule that included two wins over teams from Virginia (Salem and Highland Springs) playing Saturday in the state semifinals.

For the second straight year, however, Martinsburg’s only loss on the field came against Spring Valley.

The Bulldogs (12-1) suffered a 35-30 setback in Huntington to end their regular season. In 2020, Martinsburg had its 57-game win streak snapped when the Timberwolves claimed a 22-20 victory at Cobourn Field at David M. Walker Stadium.

Unlike last season, Martinsburg had a chance to exact revenge this time around, as the second-seeded Bulldogs drew the No. 7 seed Timberwolves in a second-round playoff matchup.

MHS made the most of its opportunity, limiting the Timberwolves’ passing attack to claim a 35-6 victory in the quarterfinal round.

“That was just the icing on the cake,” said Bulldogs’ leading receiver Hudson Clement. “We needed to prove to ourselves and everyone else that we can handle Spring Valley. It was very much needed for us to see them in the playoffs.”

Not since 2006 against Parkersburg has Martinsburg been beaten in a Class AAA final.

“No doubt Huntington is a great team,” Clement said. “But we can’t be intimidated or worry about that. We’re a great ball club, too, and we need to play our game.

“When you think of Martinsburg going there, you expect us to come home with it.”

Just ask Independence quarterback Logan Phalin. The 6-foot-3 senior signal caller has helped guide the Patriots to wins in each of their first 11 games ahead of Friday’s Class AA title game against Fairmont Senior.

Last season, IHS saw its season come to an end with a 43-15 loss to the Polar Bears in a quarterfinal. The Patriots hung tough in the opening half and trailed 15-8 at the break before the game got away from them.

“During the offseason, I kind of knew we could be something special if we kept working hard,” Phalin said. “They blew us out in the second half, but that first half was pretty close and it gave us some confidence.

“That’s really how we turned this thing around. You don’t always win games during the game or the season — you win them in the offseason.”

If Independence is to claim its first championship in its first Super Six appearance, the Patriots will have more than earned it.

The Patriots were hardly challenged throughout an 8-0 regular season and cruised in an opening-round playoff win over Shady Spring. Since then, however, Independence has passed a pair of tough tests, topping Roane County 22-8 in a quarterfinal, before overcoming a 20-7 halftime deficit in last week’s 34-20 victory over Bluefield.

The Beavers won the 2017 AA final, while the Polar Bears were state champions in 2018 and 2020, meaning the Patriots will have to defeat three of the last four state champions to bring home their first title.

“At the beginning of the year, we all wanted Bluefield and Fairmont at some point in the season, because we knew those were the top two programs in Double-A,” Phalin said. “We wanted a shot at both of them.”

The Polar Bears would not have qualified for the postseason without victories over Elkins and East Fairmont to conclude the regular season.

Up against what many would consider the most challenging schedule of any Class AA team, Fairmont Senior suffered losses to three of the top seven seeds in Class AAA — Bridgeport, University and Spring Valley — in addition to an early-season defeat against Linsly.

With no margin for error, the No. 16 seed Polar Bears were in playoff mode late in the regular season. Since qualifying for the playoffs, FSHS handed top seed Herbert Hoover its only loss this season after a late-game safety lifted the Polar Bears to a 30-28 win.

The following week, Fairmont Senior squandered a 21-0 halftime lead at Robert C. Byrd and found itself trailing 28-27, before Dylan Ours’ 95-yard kickoff return in the late stages proved to be the difference.

“It was really stressful at first. The way we were scheduled, no one wanted to play us in Double-A,” said 6-6, 300-pound two-way lineman Eric Smith. “We had to go to bigger heights. In most of the games, we held our own, but sometimes we didn’t pull through. We kept going week by week and making sure we had our plays right and then hoping it would help for the future.

“When we play bigger competition, we’re playing to that level. Whenever we play teams in Double-A, we’re still playing at that Triple-A level. We’re going to keep it as the same mentality like we’re going against Triple-A teams. We make sure we give it our all.”

The Polar Bears have benefited from improved play from quarterback Dom Stingo, who began the season starting behind center, before losing his job. Stingo has since regained the starting spot and made the most of his second chance.

“We ended up talking to him. He started getting his head right and he’s started to become a true leader for the team, taking over in practice and keeping everybody up,” said Smith, a Miami Ohio commit. “The whole mentality of our practices turns around when we’re all being leaders.”

A father-son combination has been instrumental in leading Ritchie County to its first Super Six appearance, where the No. 4 seed Rebels will take on No. 6 Williamstown at 7 p.m. Saturday.

Fourth-year head coach Rick Haught has helped resurrect the Rebels’ program, and the play of quarterback Ethan Haught is a major reason why.

“The first few years of high school it was pretty rough,” said Haught, a junior. “He was a little harder on me. You have to put in extra time and it is tough — you go home and watch film and talk a lot of football, but without those years, I wouldn’t be where I am.”

Haught, a three-year starter at QB for the Rebels, credited the team’s coaching staff as a whole for much of its success.

“They put in a lot of time together,” he said. “They watch a ton of film and they’re always super prepared for the coming weeks. The position coaches always make sure their positions are ready to play week in and week out and they do a good job knowing what the other team has to offer. It’s a huge part of our success.”

Williamstown is after its first Class A championship since 2014 when the Yellowjackets battle the Rebels.

WHS (11-2) is unbeaten in 10 contests against state competition this season, including a trio of road wins following lengthy trips — first to Buffalo and Weir in the regular season, then at No. 3 East Hardy in a second-round playoff matchup.

“When you go on a couple of those trips, you have to have some discipline, come off the bus focused and be ready for those games,” junior running back/linebacker Rickie Allen said.

The Yellowjackets lost a close game to Waterford (Ohio) 18-12 in their season opener, before reeling off six consecutive wins. Williamstown was then upended by Fort Fye (Ohio), but bounced back the next week and beat Doddridge County 26-24, despite playing without injured sophomore standout quarterback Maxwell Molessa, who has since returned.

“Our regular season win against Doddridge, when we were able to win that without Maxwell, we figured out we were on to something and doing pretty well,” Allen said.

Molessa’s return was a big factor in the second-round win over East Hardy, as well as last week’s convincing semifinal win against Doddridge County.

Williamstown has surpassed 40 points in each of its three playoff wins, totaling 135 points over that span.

“We’ve been ready for this moment all year,” Allen said. “We’ve been working since June and we have to make the most of this opportunity.”