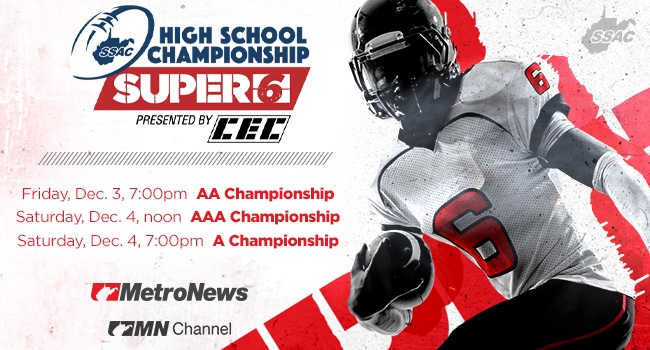 WHEELING, W.Va. — The Super Six kicks off at 7 p.m. Friday with the Class AA final — the first of three high school football championships to be played this weekend at Wheeling Island Stadium.

Each of the three games will air live on www.wvmetronews.com with a video and radio broadcast. The three title games will also be shown live on AT&T SportsNet.

The Class AA title game between No. 2 Independence and No. 16 Fairmont Senior is the lone Friday contest and will air on the primary AT&T SportsNet channel.

At noon Saturday, No. 1 Huntington battles No. 2 Martinsburg in the Class AAA final, which will also air on the primary AT&T SportsNet channel.

The weekend action concludes at 7 p.m. Saturday when No. 4 Ritchie County clashes with No. 6 Williamstown in the Class A title game, which will air on AT&T SportsNet to start, before moving to the secondary AT&T SportsNet channel at 9 p.m.

All three title game will also be shown live on the ‘MetroNewsPrep’ Facebook page.

Each championship matchup will re-air next week on AT&T SportsNet as well as on Christmas day.